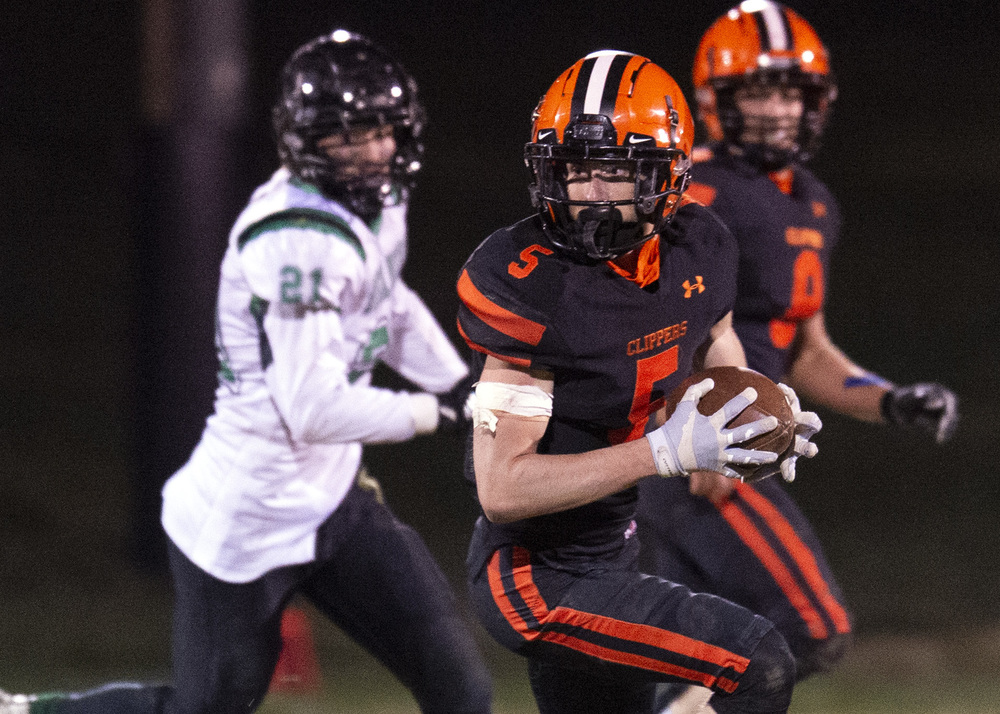 Lacking its 120-decibel rally and orange & black deluge down Sixth and Broadway streets afterwards, Cleveland’s homecoming on Friday didn’t go down as usual.

But according to senior wide receiver and defensive back Isaac Mueller, the 18-0 win over Waterville-Elysian-Morristown on the Clippers’ own football field took the sting away from those memories missed.

(Isaac Mueller deflected this WEM pass on the way up but was able to get his hands on it on the way down for a momentum-changing interception.)

“This totally makes up for it,” said Mueller, who, as homecoming king, would have been front and center at both the pep fest and parade. “This whole year has been pretty off as far as what we are used to, but this win means a lot to us seniors. We put our heart and soul into this team, and we just love every minute of it.”

The Clippers allowed the Buccaneers to invade deep into their territory a couple times early but posted the game’s first points 5 minutes before the intermission. From then on, it was pretty much all Clippers. 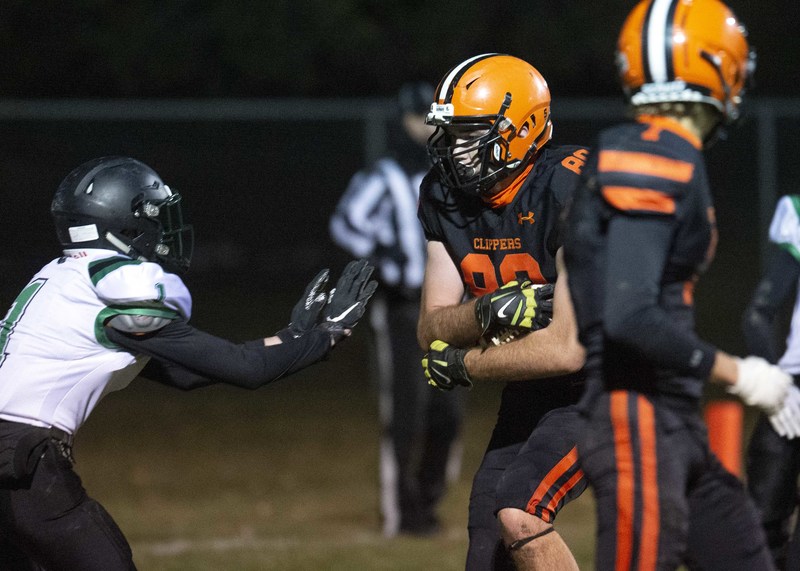 (Ben Holden pulls down an Alex McCabe toss to score a 2-point PAT.)

“We told our guys right away that they’re are not big and they’re not physical,” said assistant coach Kyle Atherton. “If we keep doing to them what other teams do to us a lot—and that’s just pound us, pound us, pound us—that’s just a matter of wills, and they’re going to want to give up, so that was our talk at halftime: we need to keep going at them. It’s easy to play hard when it’s 0-0. It’s tough when you are making no ground and you’re losing.”

The Bucs went three and out after the opening kickoff but sailed a punt for no return all the way to the Cleveland 24, where the Clippers netted a minus 7 yards. Alex’ McCabe’s punt went off the side of his foot, and the Bucs got the ball on the Clipper 27.

But the Clipper defense permitted just 5 yards from there, and the Buccaneers turned the ball over on downs. The Clippers went three and out too but had a little more breathing room after McCabe’s punt put the Buccaneers on their 45. 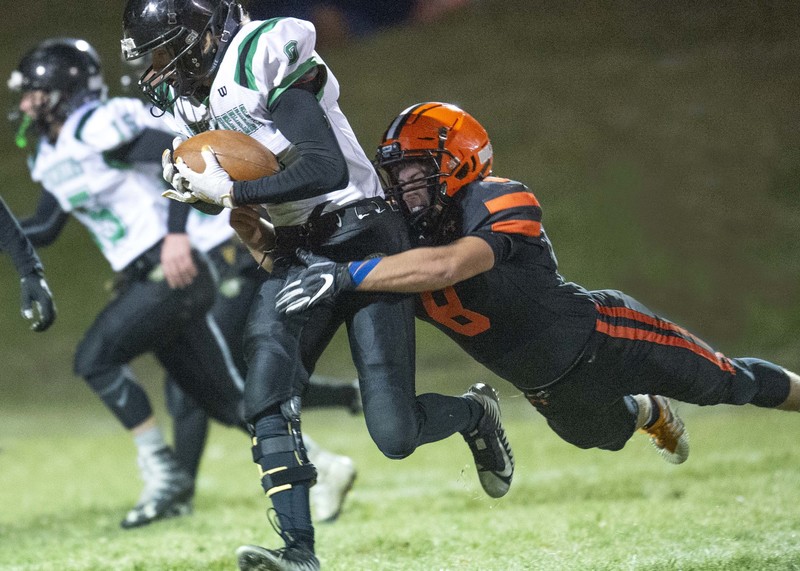 (Alex McCabe on the Clark-Kent tackle.)

Once again the Clipper defense held the Bucs to three and out, but with a block in the back penalty on the punt, Cleveland was backed up on its 10-yard line. Conservative three snaps later on a 4th and 1, the Clippers punted.

Quarantined, the Buccaneers, who beat the Clippers 43-0 last year, couldn’t play their first two games of this shortened season. They lost to St. Clair/Loyola 41-0 last week. Still trying to get in synch, they had a number of false start penalties against the Clippers.

On the Clipper 36 after the punt, the Bucs lost a dozen yards on a bad snap, and after an incomplete throw, Mueller picked off their pass on the Cleveland 20. 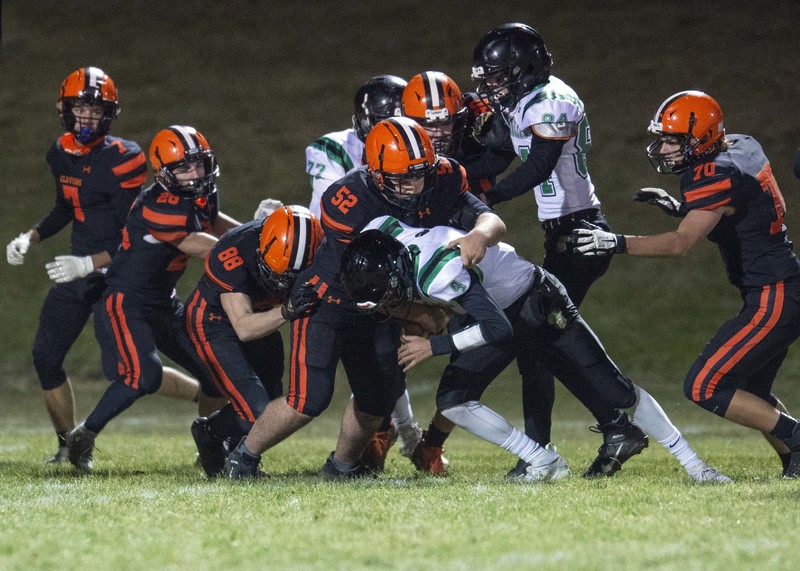 (Cameron Seely on the stop.)

“He was running a flag (straight run up field and then a turn 45 degrees toward the sidelines), and he was running slowly, so I thought I would just stay behind him so the QB couldn’t see me,” Mueller said. “I saw right over the right shoulder he was going to pass it, and sure enough, I just stepped in front of him and got the tip for the pick.”

With Tyce Shook, Alex McCabe, Eric Rohlfing and Tommy Kennedy all making nice gains after the turnover, the Clippers drove the 80 yards for the score. After McVenes ran up the middle for 7 yards, McCabe dove a yard for the touchdown and then connected with McVenes for a 2-point conversion pass. 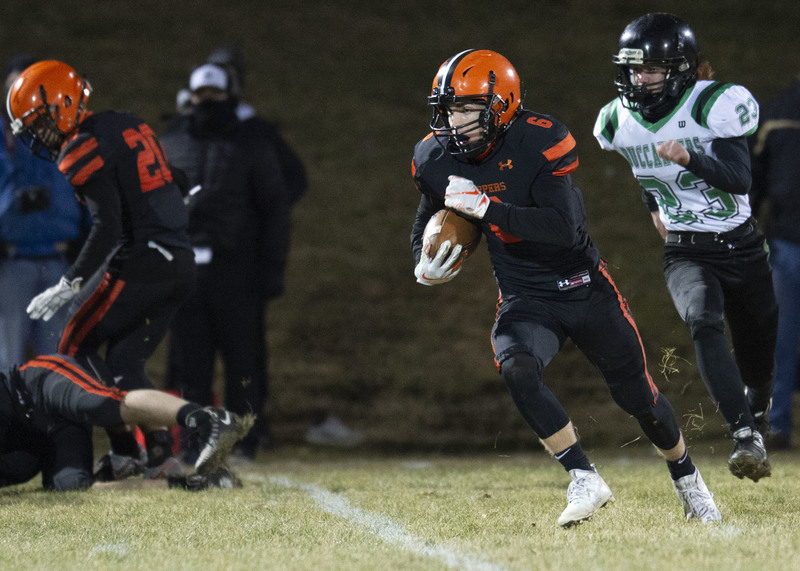 “The line played well,” Atherton said. “They (the Buccaneers) are not as physical, but at the same time early it seemed like they were really shooting, and then we patched it up and decided we needed to stick to our guys, keep a body on a body. We were peeling off them too fast.”

Waterville went three and out after the kickoff but couldn’t get the punt away. Four plays later, the Clippers punted too, putting the Bucs deep on their 22.

(With 97 yards on the ground, senior Blake McVenes was the workhorse for the Clippers. Here he turns downfield after catching a short McCabe pass.) 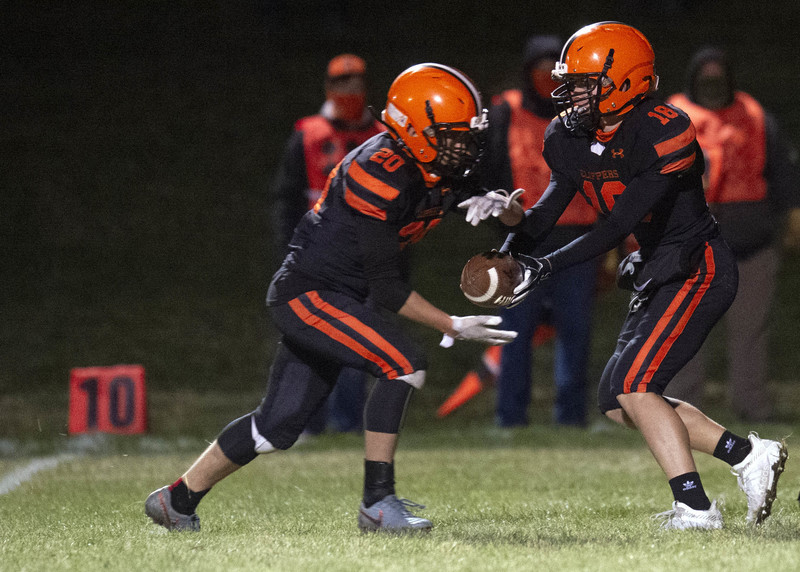 (The JV got play time at the end of the game. Here, Blake Lyons hands off to Braeden Hastings.)

A block-in the back infraction sent the Bucs back to their 14. From there, Rohlfing’s QB tackle forced a safety when the ball rolled through the end zone for a 10-0 Clipper advantage. Switching direction after the fielding the free kick, Carter Dylla carried the ball deep, but the clock drained to halftime on the play.

Late in the third quarter, the Clippers scored again. McVenes capped off a 56-yard drive with a 17 yard touchdown run.

“I got the handoff to the left, and it was kind of stuffed in the middle, and I just bounced outside and scored,” said the senior. “Our line was blocking really well; they were giving me big holes.”

Atherton said calling McVenes number was part of the game plan. He ended the night with 15 carries for a total of 97 yards. 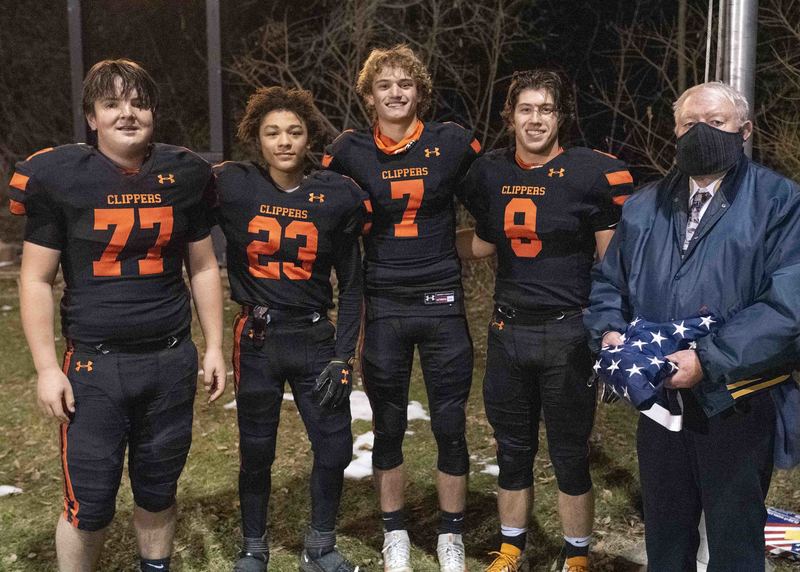 (Each with a family member who had served in the armed services, Jack Voit, Johnny Biehn, Isaac Mueller and Alex McCabe raised the flag during the National Anthem. Assisting them is Greg Davis.)

“We stayed with the player who was hot. If you watched the end of the Janesville game, he held on to the ball. He ran hard. He put his head down and just got to the hole. He’s really coming into a zone as a runner and gaining more confidence.”

McVenes said having the two seniors who missed last week’s game back on the field made a big difference.

“We got Eric (Rohlfing) back we got Ben (Holden) back. Tanyon (Hoheisel), with a broken finger, is the only one out. It was homecoming. I was pumped up, and we all just played really well.” 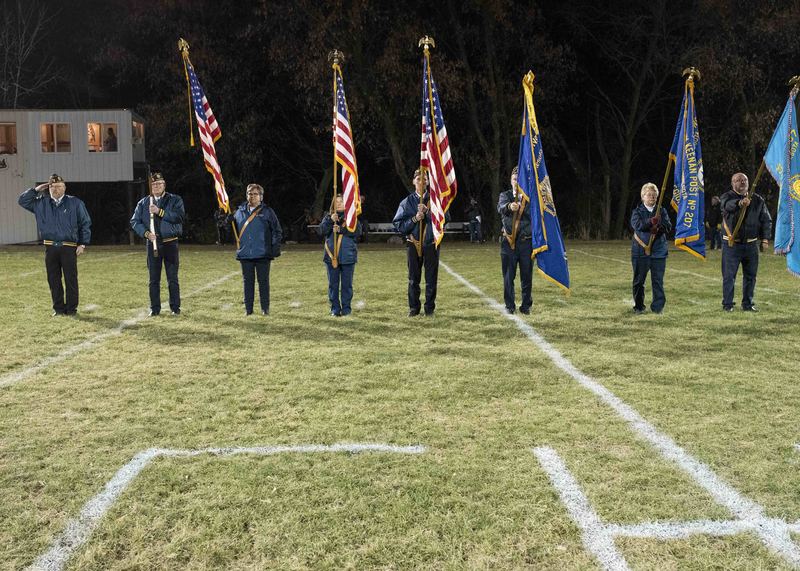 (The Cleveland color guard marched flags across the field before the game.)

“I hurt it on our first drive after halftime and wasn’t able to run very well after that,” McCabe said on Saturday. “I went into the doctor today and they said I strained my MCL.”

McCabe completed eight of 17 pass attempts for 28 yards and kept the ball eight times for 20 yards and a TD. Shook caught five throws for 18 yards. Holden grabbed two passes for eight yards and a PAT. McVenes caught one pass for a PAT. Kennedy rushed the ball nine times for 33 yards. Colin Krenik had three carries for 5 yards. Rohlfing had 10 tackles. Cameron Seely had eight tackles. Jackson Meyer had four tackles with two behind the line.