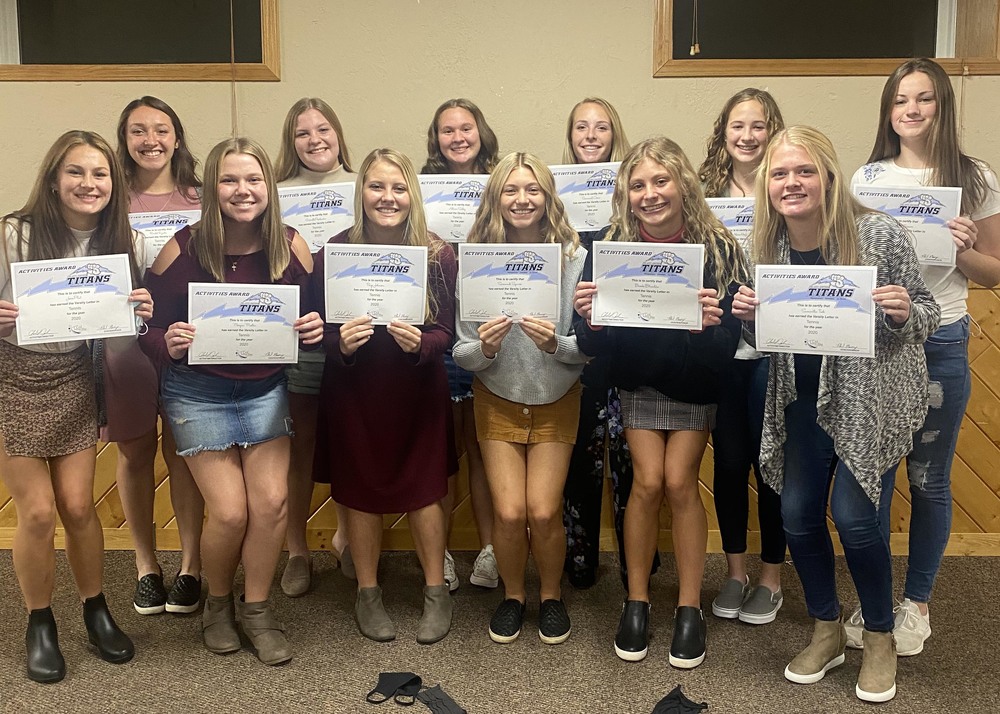 Morgan Mueller (front row, second from left) and Emma Traenor (back row, right) were among the TCU/Cleveland tennis players who received letters at an awards banquet held at the Le Center American Legion on October 28.

Traenor was half of the number-two doubles team.

“Emma came out of nowhere this year,” said head coach Phil Murry. “She played only JV last year but impressed me early this year with her play at the net. She is an extremely hard worker and seemed to really mesh well with her partner as the year went on. They won some very big matches, especially towards the end of the year.”

“Morgan surprised me this year when she came in and decided that she wanted to play singles. She worked very hard and continued to improve as the year went on. She really showed growth both physically and mentally as early season struggles translated into better, more competitive matches later in the year and some big victories.”

Tiede was chosen as the Rookie of the Year. The Most Improved Player award went to Squires while Prochaska took home the Titan Pride Award. Schley was the team points leader. Plut was named to the All-Conference team while Rynda and Prochaska were All-Conference Honorable Mentions.

With a 3.96 collective GPA, the Titans earned an Academic All State Gold Award.

Like the rest of the 2020 fall activities, it was a strange season for the tennis team, Murry said.

“To say this was an unusual year would be an understatement. With everything going on in our world and country today, we didn’t know basically until the season was ready to start whether or not we would even have a season and if we did, what it would look like. Once we got the word that we were a go with a modified version of our usual schedule, I gave the girls all the credit in the world. They basically said, ‘this is what it is’ and went on as usual.”

The Titans added six volleyball players who came out for tennis for the first time, a positive for the program, Murry said.

“Not only did the really pick up the game well, they all are really great kids and fit into our tennis ‘family’ extremely well.”

So there were many questions marks as the Titans worked to fit the pieces, but from the get go, they were extremely competitive, Murry said.

“We were losing matches 5-2 but always with a couple of ‘swing’ matches that could of gone either way. Unfortunately, those swing matches never seemed to go our way early in the season.”

The Titans started out 0-5 before going 3-2 over their final five matches to end the regular season 3-7. In the final week, they posted two 4-3 match wins—one home and one on the road—against Sibley East, a team that won seven matches and finished 2nd in the conference.

“That was the week we put it together and proved to ourselves what can happen if we win the close ones,” Murry said.

So after finishing the regular season on a hig” note, the Titans started playoffs in the 1AA section, which TCU/Cleveland entered last year.

“In a year we went from a 16 seed to an 11 seed, which I believe would have been higher had we been able to play our regular schedule with five matches against teams from that section,” Murry said

In section play, the Titans were swept by host Lakeville North and then lost 5-2 to Albert Lea at home. The latter meet came down to the final two matches on the court going three sets with one of them decided in a tiebreaker.

“It was a disappointing loss, but it was nice to finish our season at home, Murry said. “Every year, your hope as a coach is that wherever you start, you get better by the end of the year. When we started this year, I had no idea what to expect. I was so happy with our play, especially at the end of the year.”

“She continues to impress me with her knowledge of the game and the way she is able to relate to all our athletes. I feel like I truly have the best assistant coach in the state.”

He also thanked the players’ parents.

“You are second to none. You really get it. You support your daughters and they really appreciate it. But more importantly, you allow them to be who they are without any added pressure and drama common in many other sports. We always get the best girls for tennis. That is because of you. You raised them and then entrusted us with them. Thank you.

Finally he thanked his team members.

“I can’t say it enough. You are an amazing group of young ladies. It’s because of you that after 32 plus years of coaching I still looked forward to coming to the courts every day. Thank you to all of our regulars, but thank you also for those young ladies who took a chance and came over from swimming and volleyball to give us a try. I hope you enjoyed your experience as much as we enjoyed having you here.”

Murry will retire in about two months, both as a coach and as a TCU elementary teacher.

“Thank you for all you have done,” he said. You have made the 32 plus years fly by. I will miss all of you and all of the hard work and dedication that you have given to your school, to your team, and to me.”