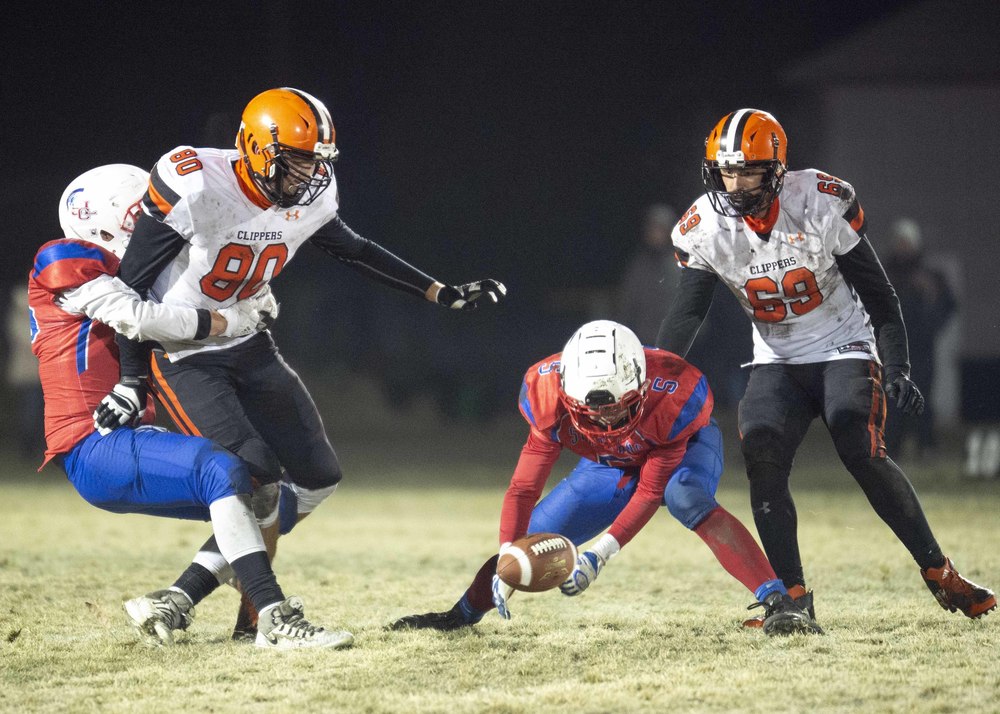 Only down 14-0 and gaining an offensive rhythm, the Clippers were hanging around before intermission against St. Clair/Mankato Loyola on Wednesday, but the second half was all Spartans, and the Clippers were shut out for the first time this fall, 31-0.

The end of the regular season after a wet snow 24 hours earlier, the game was played in 30 degree temps on a spongy in places, muddy in others St. Clair field.

“We were flat; it was cold,” said assistant coach Kyle Atherton. “At halftime it was 14-0 and two big plays and that was it, so we were competing. But to get to where we want to be, we have to get mentally stronger and understand that we’re as good as a lot of these teams. St. Clair/Loyola is a 2A team.”

The Clippers held the Spartans to three and out after the opening kickoff. After the punt, Blake McVenes ran for 9 yards, and Jackson Meyer took a handoff for six more, but a sac on quarterback Alex McCabe, back from missing last week due to an injury, put a damper on the drive.

Henry Strobel’s punt went all the way to the St Clair/Loyola 2, but the Spartans dug out with a 10-yard run and 15 yard pass and then took advantage of a collision between two Clipper defensive backs to score on a 65-yard catch and run up the middle. The Spartans missed the PAT but were on the board with 2:28 left in the first quarter.

After the Clippers went three and out, they suckered on quarterback draw that was good for 50 yards and put the Spartans three feet in front of the goal line. With a pass into the end zone after the next snap and the ensuing PAT run, St Clair/Loyola led 14 to nothing.

The Clippers picked up a couple of first downs after the kickoff but were stopped on 4th and 1 at the Spartan 40. The defense held, and the Clippers again gained a pair of first downs in a campaign that got as far as the Spartan 25, but stymied from there, they turned the ball over on downs.

The Spartans missed a field goal attempt and time ran out on the Clippers to end the half.

But missing 220-lb senior lineman Cameron Seely (illness), defensive back Carter Dylla (fractured foot) and linebacker Tanyon Hoheisel (fractured hand) and with linebacker Cade Kriha leaving the field early with an injury, the Clippers were on their heels after the break.

“You always have to have the next guy step up,” Atherton said, “but in a small school that next guy might be a bit of a drop-off. We’ve got guys out there who have never played football before so those things hurt. It’s tough to overcome when you’re limited with guys out.”

After the second-half kickoff, the Spartans intercepted a McCabe pass and scored six plays later on a 35-yard run. It was turnover city the rest of the quarter. The Spartans had a big run, but Tyce Shook removed a fumble on the play at the Clipper 35. Three snaps later, the Spartans got the ball back on another interception but turned it over on downs.

With a field goal, the Spartans led 24-0 in the fourth quarter. Digging out after a block-in-the back penalty on the kickoff that put the Clippers on their own 10, Isaac Mueller had catches of 10 and 6 yards, but a pick six and a PAT kick made for the 31-0 final.

Meyer and Eric Rohlfing each made nine tackles with two of them for a loss. Kennedy had seven tackles with one behind the scrimmage line.

The third-seeded Clippers will host sixth-ranked New Ulm Cathedral on Tuesday in the first round of the section. The Greyhounds are 2-3 and have played no team in common with Cleveland.

“We have a chance to do well in our section,” Atherton said. “We think that; they have to think that.” 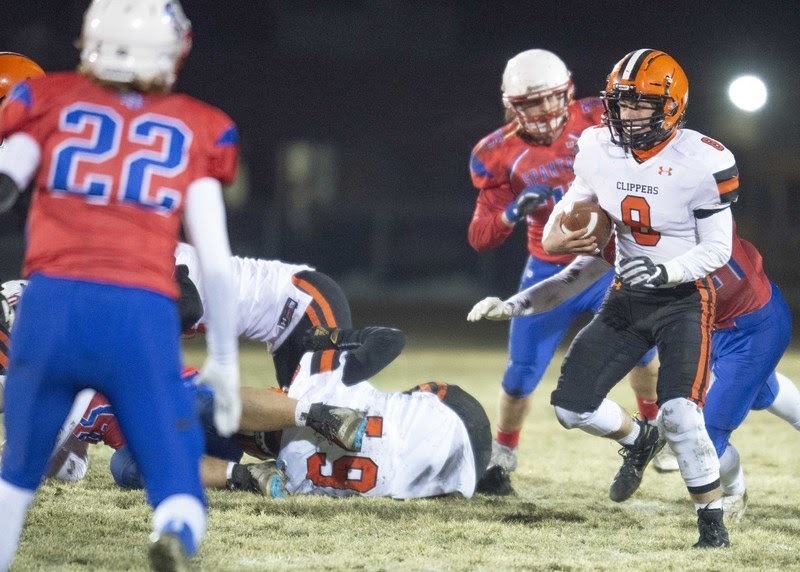 Alex McCabe on the run. 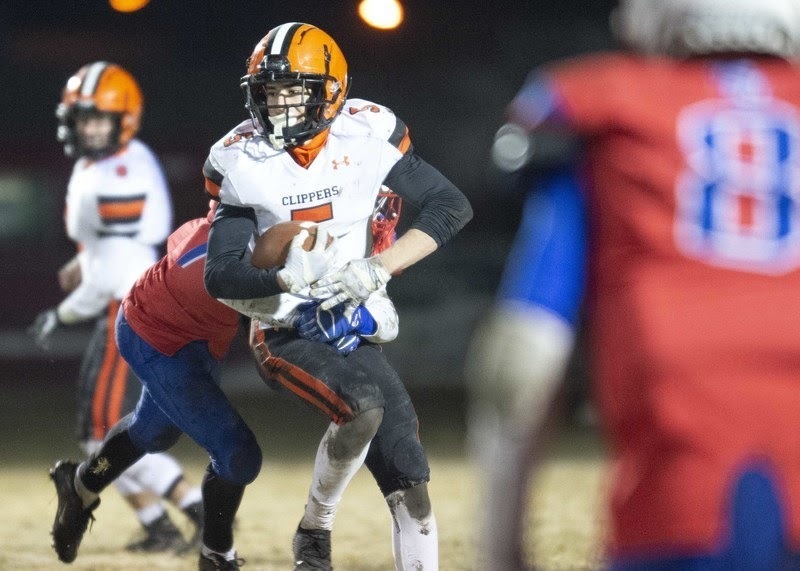 Blake McVenes gets wrapped up on a kick return. 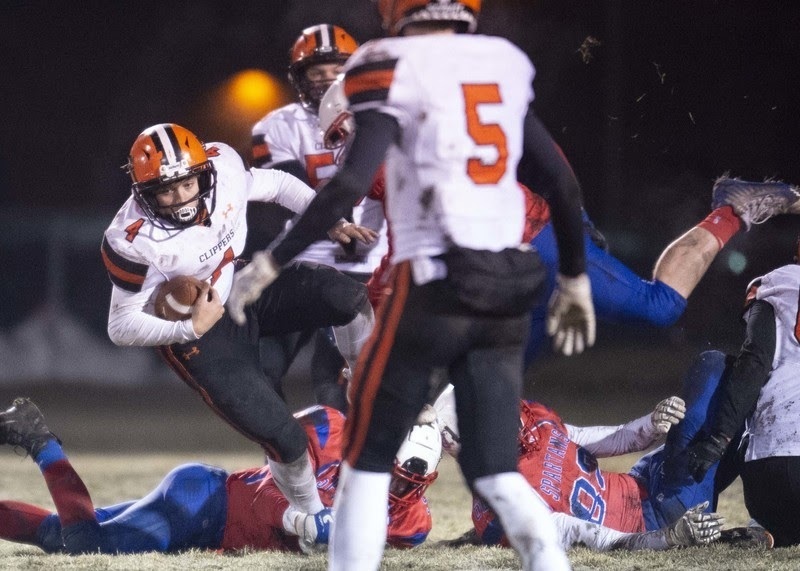 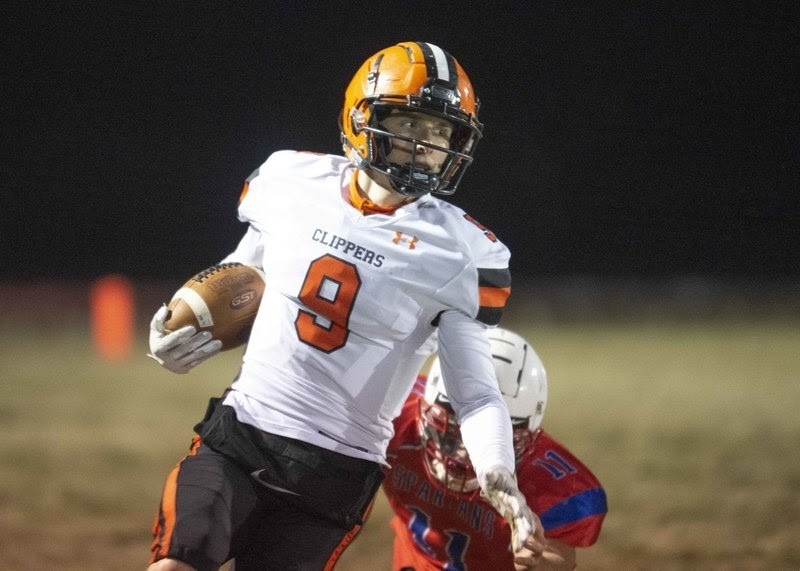 Tyce Shook shakes off a defender on a kick return. 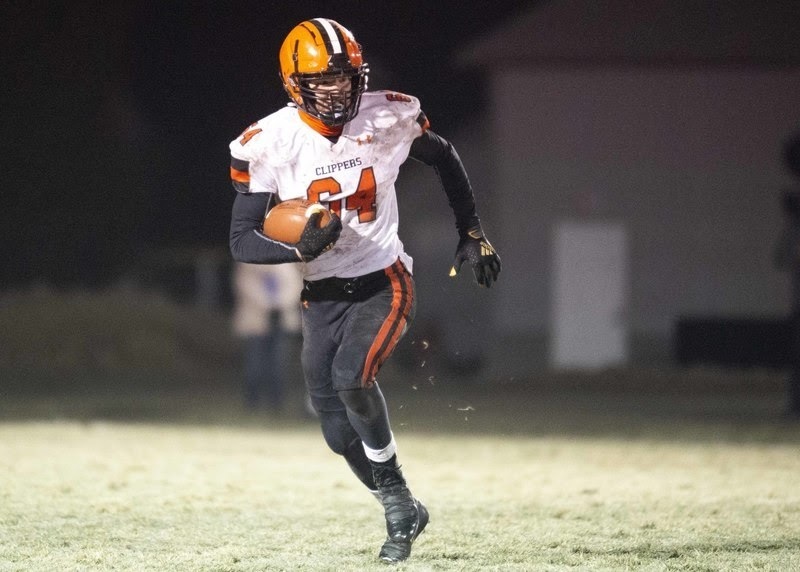 Senior linebacker/TE, Eric Rohlfing got a chance to carry the ball on a kick return.