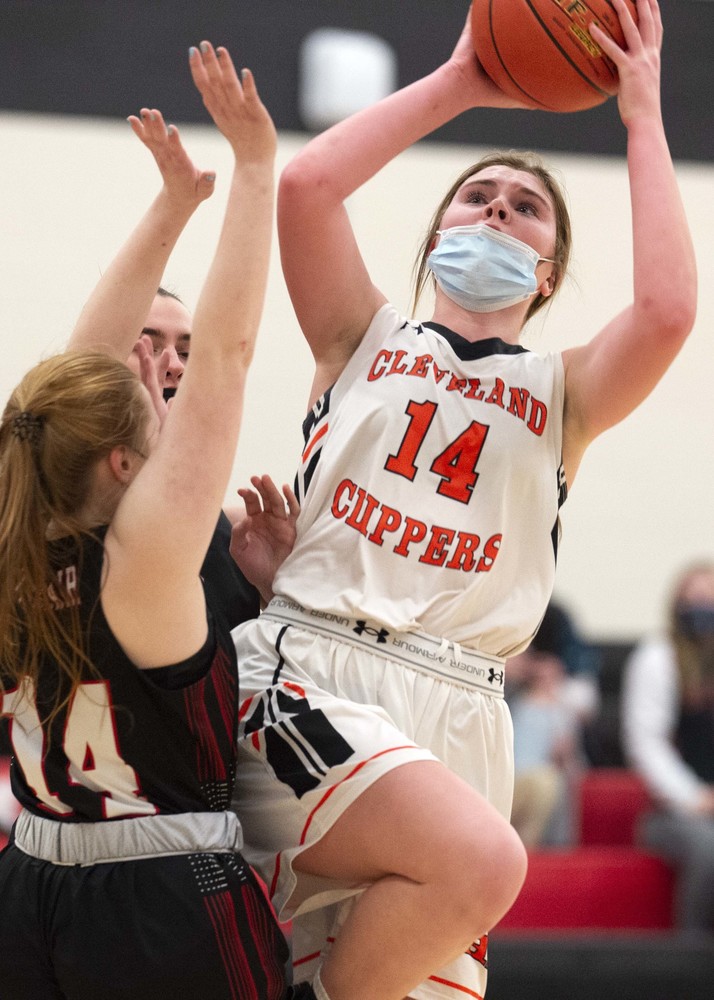 While they dominated the first half in St. Clair on Monday, the Clipper varsity girls—with two and then three starters sidelined with five fouls—couldn’t hang to a narrow lead in the final minute and fell to the Cyclones 70-66.

“I don’t know if anyone thought we would be in it or if we had any business being in it, but we were,” said head coach Joe Remiger. “I can’t be more proud of their effort.”

Sarena Remiger pulled down an offensive rebound after the jump for the game’s first basket. Emily Kern (above) drove inside for a score, and Kaylee Karels took the ball down court and in for a basket three times with a free throw tacked on to the last trip. After a Kern steal, Macey Ziebarth bowed in a three-point basket to put the Clippers up 14-2.

The Clippers worked the ball into Kern, and the junior responded with three more baskets and three made free throws. As the half drew to a close, Ziebarth, fouled behind the arc, made all three free shots. Halle McCabe grabbed her own rebound and scored her second basket of the half to put the Clippers up 36-19 at the intermission.

McCabe rebounded and scored to start the second half, Karels sprinted down the floor for two more points, and Remiger pulled down her own rebound and put it back up for a basket.

But the Cyclones responded with a couple of threes to trim their deficit.

The Clippers were up 60-51 when Remiger got flagged for her fourth foul. With just under 6 minutes to go, she exited the game with five fouls.

St. Clair pulled down a couple offensive rebounds and put in a three to pull within six, 64-58 with 2:41 left. From there, the Cyclones made a basket after a steal and, when McCabe fouled out, a free throw. When the Clippers lost the ball out of bounds, the Cyclones scored to pull within a point, 64-63 with 1:44 left.

"We had to many turnovers," Remiger said. "Defensively we didn't stop the drive in the second half or close out on open shooters."

The Cyclones pulled ahead on a three-pointer with 44 seconds remaining and then hit a free shot to go up 67-64. Karels scored but soon fouled out with 10 seconds left. St. Clair made both ensuing free shots to go up 69-66.

With 10 seconds left, the Clippers, with only Kern and Ziebarth left from the starting five, had a chance to tie the game with a three, but setting up Ziebarth for the long shot was itself a long shot. The pass down court went out of bounds to spoil any chance the Clippers had.

St. Clair made a free throw in the final few seconds to put the finishing touches on the come-from-behind victory.

It was a bitter loss for the Clippers, but Remiger was thankful they didn't take it lightly.

“You see all the tears. I’m glad it hurt. I’m glad that they have invested enough in this to say ‘I don’t like this.’ I’m glad to see that they take it personally and that it means something to them. The best part is we get to play them again. We look forward that.”

Four of the five starters were in double figures: Kern and Karels each had 16 points. Ziebarth scored 13, and McCabe added 10 points. Remiger was just shy of double digits with eight points, but she led the team in rebounds with a dozen.

"I'm pleased with them working together as a team on offense," Remiger said. "The girls gave everything they had effort wise."

Taking their frustrations out in Alden on Thursday, the Clippers bounced back from the loss with a 60-26 win over Alden-Conger/Glenville-Emmons. It was the first road win this season for the Clippers. Nine days earlier, the Clippers beat the Knights 85-55.

Despite the up-and-down week, Remiger likes where the program is so far, where it has been and where he thinks it will go this season.

“Besides Martin County West down there, we competed with everybody we played with.”

The Clippers host Madelia on Monday. The Blackhawks are still looking for their first win.

The Cyclones had trouble stopping Kaylee Karels sprints to the net in the first half.

Macey Ziebarth sets up for a pass in St.  Clair.