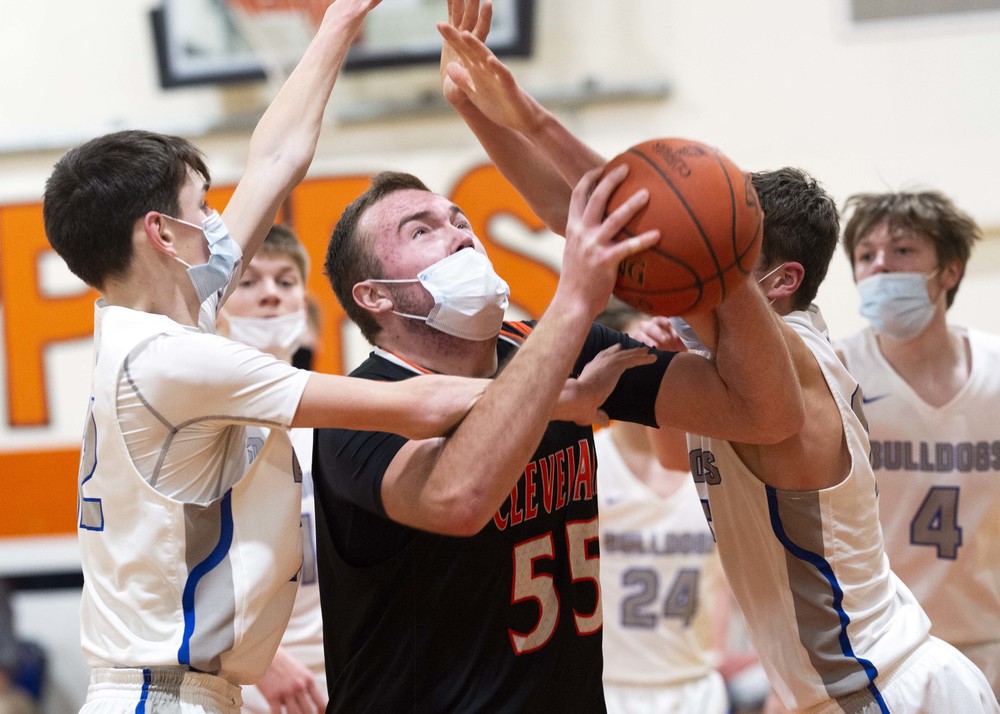 Keeping a point advantage from the jump to the final buzzer, the Clipper varsity boys down visiting JWP 67-44 on Tuesday.

Ben Holden (above) exploited his size to lead all scorers with 30 points. He also snatched 15 rebounds.

“The biggest thing is it was a team win,” said the 6-6 senior. “I felt everyone was in it. The bench was electric. It was a good team win.”

The Clippers opened the game with a bang-bang-bang play. Elijah Sullivan stole, tossed to Isaac Mueller down low, and Mueller handed off to Alex McCabe, who was racing through the paint, for a layup.

Mueller came back with a three from the corner, and Sullivan stole again and made a free shot to put the Clippers quickly in front 8-0. Holden spun in an in-bounds pass, and Sullivan made a steal and shore-to-shore drive for a layup for a 12-2 Clipper advantage.

“We had some beautiful passes,” said head coach Dan Fredrickson, “swinging it side-top-side, getting it from the high post to the low post. We had some nice entries.”

The Bulldogs, coming in to Cleveland with a 2-5 conference record, hit two threes and scored the next six points, but Holden went to work inside for the next nine Clipper points and a 21-16 lead.

Eric Rohlfing and McCabe put in jumpers, and Rohlfing took a Holden handoff in for a layup and a 30-23 Clipper advantage at the half.

“There were some shots in the first half we left out there,” Fredrickson said. “We were a little too rushed. I think they felt like there was a lot of low-hanging fruit in the game, and I think we tried to force some times.”

Mueller assisted Sullivan and then made a steal and drive down the floor for a layup for the first four points after the break. Holden scored 17 points in the second half, and the Clippers cruised to the victory.

“I thought our defense was really good tonight,” Fredrickson said. “I thought we took a nice job taking some of their stuff away early.”

Mueller scored 11 points, six of them from three-point land. Rohlfing added 10 points, McCabe had nine points, and Sullivan scored eight points. Cameron Seely and Jackson Meyer each had two points off the bench.

Former Clipper Karson Lindsay, a sophomore, led the Bulldog effort with 15 points, all from behind the arc.

The Clippers, now 6-1 in the Valley Conference and 7-1 overall, beat Alden-Conger/Glenville Emmons 78-51 on Friday.

In other recent  action in the unpredictable Valley, Loyola upset St. Clair 57-47. Nicollet fell to Madelia 66-56 but dumped LCWM 81-57. LCWM in turn beat T/ML/GHEC 51-35 for the Jaguar’s second loss. St. Clair took their one loss out on JWP with a 92-26 domination. MCW edged Nicollet 65-62. T/ML/GHEC is still leading the Valley West. Cleveland, Loyola and St. Clair each have one loss in the Valley West.

Holden said the victory over the rival Bulldogs helped ease the tough loss at Loyola three days earlier…but only a little.

“You keep a short-term memory, but in the back of your mind, that’s got to push you. It takes the sting away, but at the same time we’ve got St. Clair, Loyola, St. Clair coming up. We’re just trying to hit the ground running.”

The Clippers will host St. Clair on Tuesday.

Elijah Sullivan flies by the Cleveland bench after one of five muggings he had against JWP.

Alex McCabe goes up in the paint.