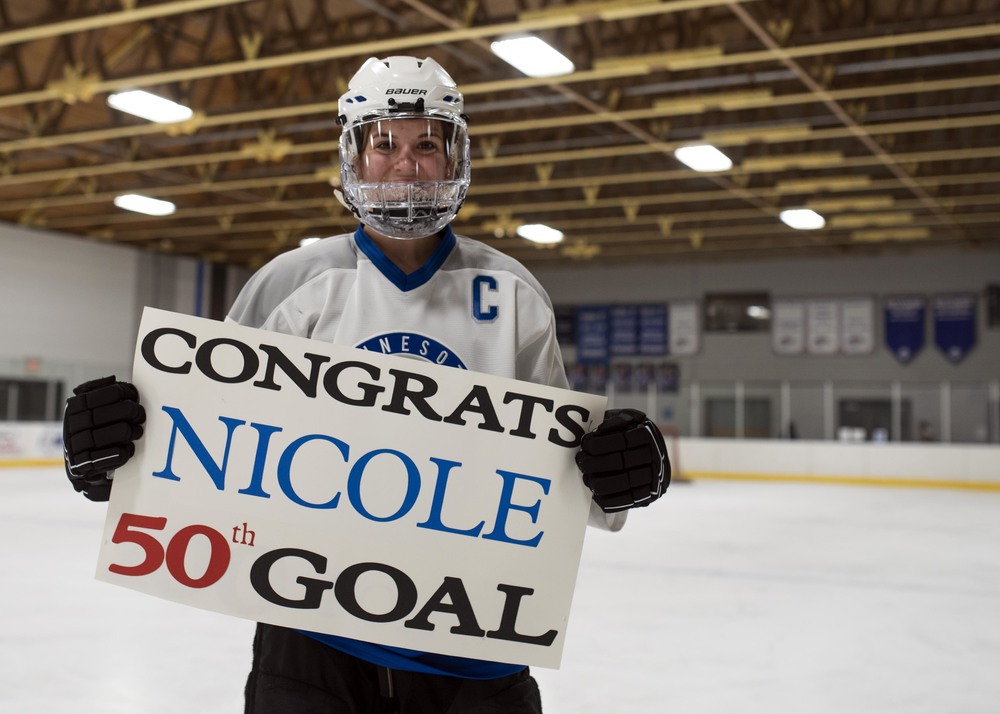 Just 25 seconds into the first period against visiting Mankato West, McCabe, only an eighth grader, slid an Emma Doherty-Bohn handoff into the net.

On Friday, more than four years and 49 goals later, McCabe reached a milestone 50 goals as the Bulldogs shutout visiting Waseca 12-0. She leads her team this season in goals scored with 11.

“Everything I’ve worked for paid off,” said McCabe. “It shows I have been working my butt off to get to the player I am today.”

McCabe, who started her hockey career at the tender age of five, joined the varsity Bulldogs as an eighth grader, first dabbling in the third line and then working her way up the ranks.

“I remember watching her on the JV squad, and she was playing defense,” said head coach Tom Blaido. “As the season went halfway through, we said ‘there’s a talent there in this little eighth grader,’ and we moved her up to varsity.”

With the advancement, McCabe also switched from defender to forward, a change that fit her aggressive and cerebral style, Blaido said.

“It’s constant movement. She’s constantly going, and she’s always in the offensive zone. It’s always an attack to the net. She gets it and knows where she wants to be. It’s at the net. That’s where the prize is, and she works hard to get there.”

Going to work right away against Waseca, McCabe scored a minute and 35 seconds into the first period with junior forward Anna Pavlo and senior defender Mary Rella on the assist.

“They’re so good,” McCabe said. “They knew I was so close and wanted to set me up. They wanted to see me reach my goal as much as I wanted to.”

Last season, the McCabe-Keely Olness combo was the Bulldog’s one-two punch, but that tandem dissolved when Olness graduated.

“Keely was definitely my partner in crime,” McCabe said. “We always knew where we were on the ice. This year Anna Pavlo and (senior forward) Emma Seaver…we’ve been working so well together. We know where we are all the time and always have been really connecting.”

With the Bulldogs up 6-0 at 7:18 into the second frame, McCabe, just in front and on the left side of the net, took a Pavlo pass and, battling between two Bluejay defenders, sent it between the posts for the milestone 50.

While she knew going into the Waseca game that she needed a pair of goals to make 50, McCabe said that reaching any kind of landmark wasn’t on her radar until the start of this season.

“I never really thought of it. I never really kept track of my points until this year. But I wanted to see where I was, and it was closer than I ever thought it would be.”

Just 21 seconds later, McCabe scored once more with Pavlo again handing off and senior defender Gabrielle Prochaska starting the sequence. With 20 seconds left in the second period and the Bulldogs already up 9-0, McCabe scored yet again for her 52nd career goal. Pavlo and Seaver assisted. All goals were even strength.

“On a personal level, Nicole is probably one of the most pleasant kids that you’ll ever meet,” Blaido said. “When she scored her fourth goal tonight, she knew the game was already out of hand, and her reaction was ‘I kind of feel bad in a way.’”

McCabe currently has 16 points (goals plus assists) this season. She is ranked 13th in the state in goals scored this season and 34th in points.

Last year she racked up 21 goals and 19 assists. As a sophomore she had 11 goals and 13 assists. In her freshman year she totaled eight goals and four assists, and as a rookie eighth grader she had one goal and three assists.

“This is the progression of the player,” Blaido said. “This is a steady, steady progression.”

Freshman McKenna Mueller also scored a goal against the Bluejays. It came in the first period and was her second this season.

The  Minnesota River girls are 4-4 overall and 4-2 in the Big South Conference. This week, the Bulldogs have a rematch with host Waseca on Tuesday and travel to New Ulm on Thursday.

McCabe needs a combo of four goals-assists to reach the 100-point milestone, something she will likely achieve this week.

Nicole McCabe winds up for her 50th career goal.

Anna Pavlo was the first to congratulate McCabe on her 50th career goal. Pavlo made the assist.