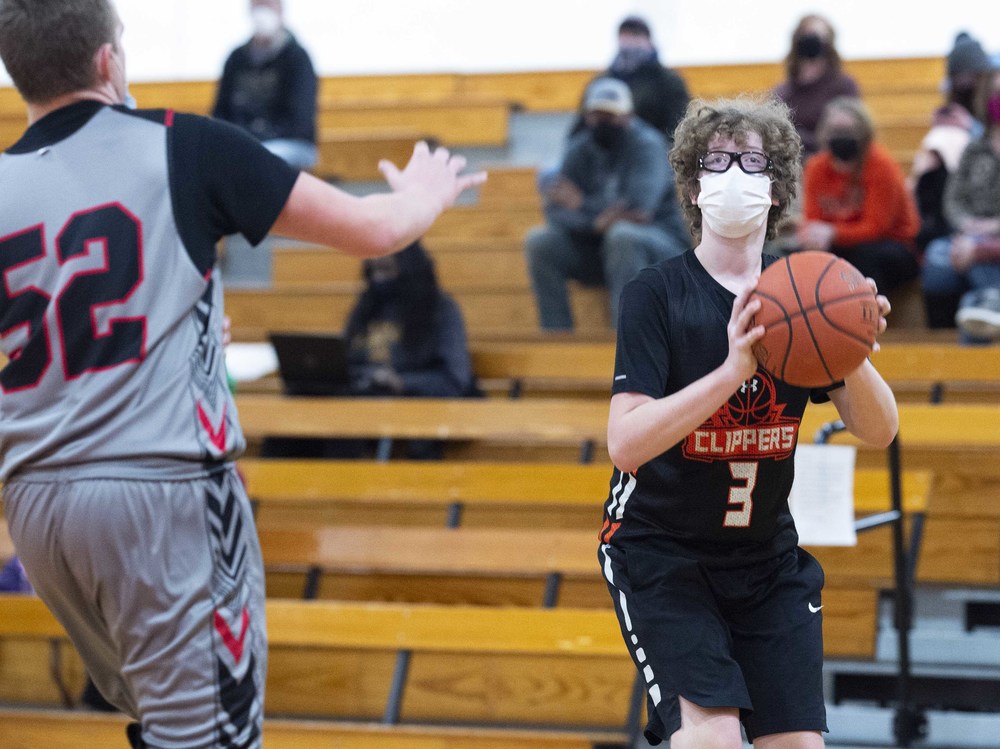 While their underclassman counterparts play like their shorts are on fire, the eighth grade boys basketball team is much more methodical.

They are still looking for their second win after falling 29-23 to visiting Alden-Conger/Glenville-Emmons on Friday.

Alexander Johnson scored on a jumper and then behind the arc to put the Clippers up 5-4. After two Knight baskets, Kale Kelley connected with Kyle Connor (above) in the paint for a layup to pull the Clippers within a point, 8-7. Connor spun inside for a basket, but the Knights posted the final two baskets of the half to go up 12-9 at the break.

Conner hit the second of two free shots for the first point of the second half. With a Johnson hook shot from the baseline, the Clippers knotted the game 12-12 at the 10:50 mark.

The Knights answered with a basket, but Connor made a nifty underhanded layup to tie the game at 14.

But the Knights scored on an inside basket. They missed the ensuing foul shot but got the rebound and another foul and this time made both free shots to suddenly put them ahead 18-14. It was a lead they would never give up.

Kelley stole at half court and made the layup that fouled, but the Knights made a free point. Connor sunk the second of two foul shots, but the Knights replied with two baskets from the floor and a foul basket to pull ahead 24-17.

Hunter Plafcan scored on a jumper, but the Knights pulled down an offensive rebound and scored. Connor scored from underneath after a Clipper steal to pull the Clippers within 5, 26-21.

It was all free shots from there to the final buzzer with Plafcan and Connor each making the second of two and the Knights extending their lead with three.

This week, the eighth grade boys travel to St. Clair on Tuesday and to Loyola on Thursday.

Alexander Johnson poises for a shot from the corner.

Hunter Plafcan makes his way toward the net.