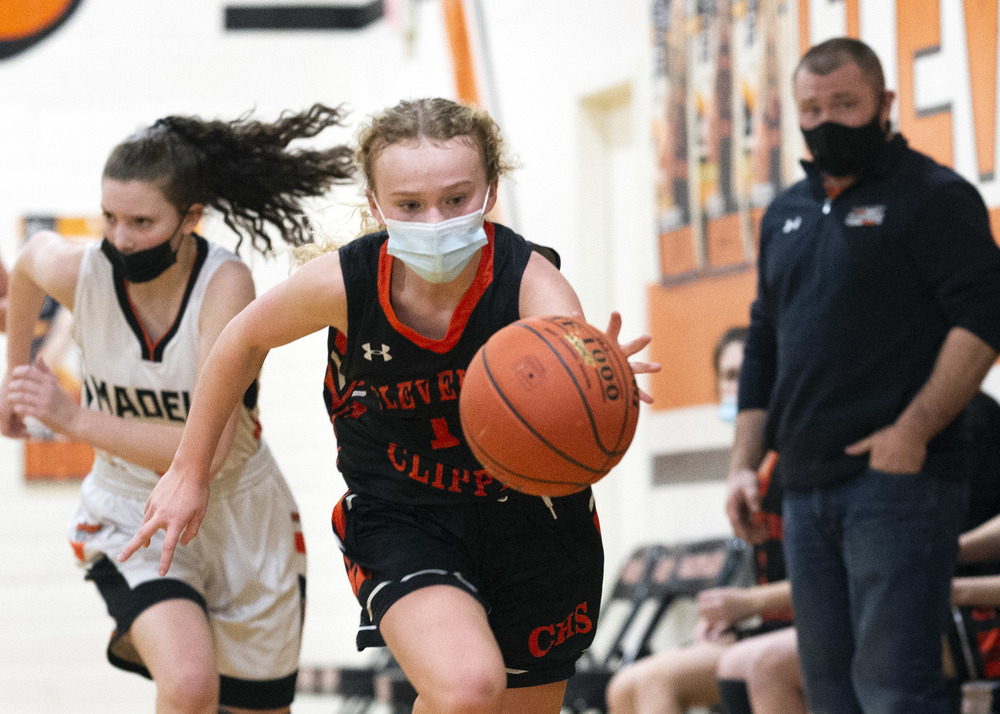 Neither Madelia nor Cleveland had a B girls basketball team last season, but both teams reorganized this season and met Monday on Cleveland’s court.

With Laci Hollerich and Greta Hahn (above) in for the first half, the Clippers only trailed by a point at the break, 11-10, but with the H-H tandem saved for the varsity, the Clippers fielded less experience in the second half and, although they rotated the ball well at times, fell 33-15.

The Clippers got off to a good start. Mariah McCabe scored the game’s first basket, and then Hollerich’s Hahn handoff dropped through the net. Hollerich scored on a layup to put the Clippers up 6-0.

From there, Hollerich went on the steal, but the Clippers couldn’t convert. Meanwhile the Blackhawks scored the next four points before Hollerich read an open lane for a layup.

With the Clippers up 8-5, McCabe on a deep jumper, but the reset of the half was all Madelia.

The second half was all Blackhawks too. Emma Treanor made a free throw, but taking advantage of the press and the steal, Madelia went up 29-11 before Treanor made another freebie.

Treanor sunk both halves of a one-and-one, and McCabe made the second of two free shots for the remainder of the Clippers’ five second-half points.

The B Clippers host Lake Crystal-Wellcome Memorial on Thursday.

Laci  Hollerich drives under the rim.

Jersie Kelley takes the ball across midcourt in the second half.