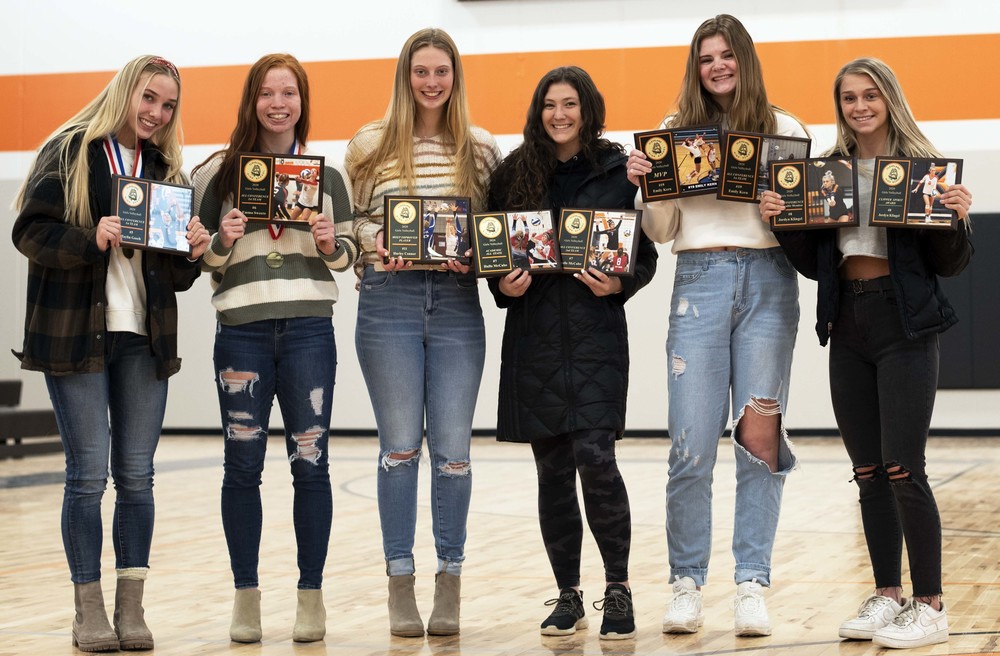 While they were hoping to squeeze in a more formal banquet once gatherings were kosher, coach Bree Meyer’s classroom on Wednesday afternoon was the best the 2020 Clipper volleyball team could schedule for its awards presentation.

For the second year in a row, conference coaches named junior middle hitter Emily Kern (second from right) to the All-Valley Conference first team while her teammates chose her as the Clippers’ Most Valuable Player. She smacked 179 kills, raised up 164 digs, delivered 26 service aces, put up 53 blocks and made five set assists

Emma Sweere (second from left), a sophomore libero, was also picked as a member of the All-Valley first team. She scooped 231 digs and also propped up 16 set assists. Sweere also earned the Miss Hustle award and an award for the team’s most service aces (30). Sweere was an All-Conference Honorable Mention in 2019.

Named to the All-Valley Conference second team was senior outside hitter Halle McCabe (third from right). Back after missing all last season due to a knee injury, McCabe bashed 115 kills. She also had 78 digs, six service aces and four set assists.

An All-Conference Honorable Mention went junior defensive specialist Jordyn Klingel (right). She pulled up 89 digs and had nine set assists, nine ace serves, a pair of kills and one block. Klingel, who was also an honorable mention in 2020, took home the Clipper Spirit award.

Other stats to note: senior hitter Brianna Connor had a shortened season due to COVID quarantine. Her last game was November 2. She ended the season with 26 kills, 20 digs, 11 ace serves and one set assist.

Maintaining at least a 3.5 GPA during the season, All Valley Conference Academic Award earners were McCabe, Klingel, Jindra, the Connor cousins, Dembouski, Porter, Hollerich, Remiger, Kern, Sweere, Gosch and Kortuem. Academic All-State honors, an award for seniors with a GPA of 3.75 or higher, went to McCabe.

The Clippers ended the shortened, no-section-tournament 2020 season 11-1. They came back to beat the only team they lost to: Alden-Conger. They had the best conference record but officially finished in third place. They were ranked 12th out of 180 on MinnesotaScores.Net for Class A, the highest in Meyer’s seven years as head coach.

“We were very thankful to have a successful COVID season considering the circumstances that we were given,” Meyer said. “The girls really came together as a team on the court despite not having any team bonding activities this year.  We will miss our three seniors; Halle McCabe, Brianna Connor and Serena Williams. We will have 12 varsity players returning for next season. We look forward to summer and playing in our new gym next year.”

If herd immunity is pulled off as planned, a full-schedule should be on the docket in 2021. New for next fall, the Clippers will have a scrimmage against Le Sueur-Henderson under the Cleveland football field lights. They will also play an afternoon game at Maple River at 1:00 pm for the Eagle’s homecoming.

Next year’s captains will be Kern, Gosch, Sweere and Kortuem.