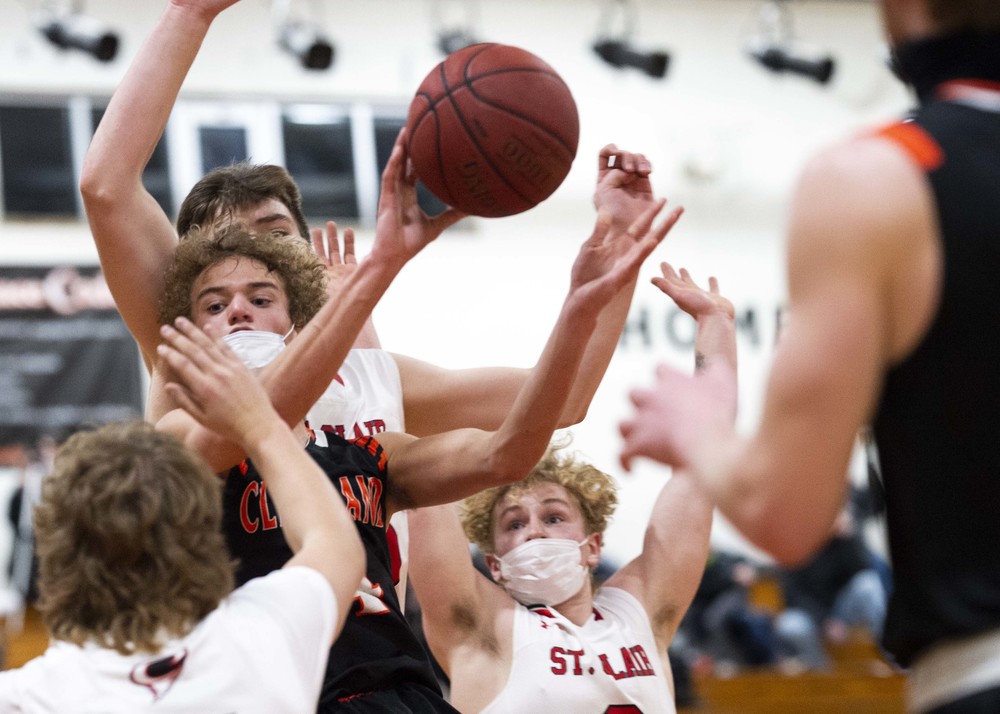 When it comes to Valley Conference basketball, St Clair vs Cleveland has been a storied rivalry.

The Clippers are 0-5 against the Cyclones over the last three years, including in a double overtime Valley Showcase game in 2018. The year before, the Clippers easily won over the Cyclones twice. In 2016, the Clippers, after beating St. Clair on the road, came from behind late at home against St. Clair to take the Valley title but later lost to the Cyclones at MSU,M in the section 2A championship.

With both teams’ only loss this year to Loyola and St. Clair ranked second in the state before that, Tuesday’s home match-up between the Valley foes hearkened back to five years ago.

And, in thrilling fashion, the Clippers came through with an 82-76 triumph.

“It was huge, a signature, signature win,” said head coach Dan Fredrickson, who thought it was the Clippers’ most important home victory since that 2016 conference championship meeting. “I told the guys tonight, ‘I don’t want to make the game too big, but I’ll do it a disservice by saying it’s not a big game.’ And we talked about the relevance of it, and I won’t get into details, but just how big the game was. Everybody throughout the state is going to check the scores of this one, especially in our area, so it’s just a monster win.”

Overcoming missed shots early, the Clippers took the lead late in the first half, but St. Clair threatened in the game’s final minutes.

“They hit some shots late,” Fredrickson said. "They are a good three-point shooting team. Connor Andree is one of the best in the area for shooting threes. He’s the one who got really hot at the end. We switched defenses trying to get out on him, but someone else hit a three, so we weren’t back to what we were in.”

Up 65-62, the Clippers missed from across the arc and then from inside for two scoreless possessions. Meanwhile, the Cyclones scored on a pair of free shots and from three-point territory to pull within one with 4:45 remaining.

But not succumbing to the pressure, Elijah Sullivan snuck an underhand pass to Ben Holden, who was waiting beneath the net. The catalyst to a seven-point run, the 6-6 senior put the handoff up and in. Holden’s and-one attempt caromed off the rim, but the Clippers were up by three.

After Holden pulled down a defensive rebound, Eric Rohlfing took the ball inside and then kicked it back to Holden, who was waiting behind the arc. While he missed a few three pointers in the first half, this time, his shot went through the net. With an Isaac Mueller (above) steal and toss to Sullivan for a layup, the Clippers were suddenly back up by eight.

The Cyclones scored a basket from the floor. Mueller made the front end of a two-shot foul, and the Cyclones went back to the three to pull within four, 73-69. Back under the Clipper net, Holden fought hard inside for a rebound and basket.

St. Clair was off the mark on the next two possessions, and the Clippers made seven of 10 foul shots in the final minutes to seal the win.

“Our guys hung on,” Frederickson said. “They earned it tonight."

The Clippers were off the mark for much of the first half but kept the game close with steals.

Down 4-0, Holden made two free shots, and Sullivan looped in a three from the corner to put Cleveland up by a point. But the Cyclones went on a six-point spurt that stopped when Sullivan made the second of a hat trick of three pointers.

Holden’s fade-away jumper pulled the Clippers within a point, 12-11. Sullivan stole twice, and the Cyclones turned the ball over out of bounds, but the Clippers, off target, missed a trio of threes and an easy layup before Holden scored from under the rim.

Rohlfing said he wasn’t worried that the first half would turn out like the Loyola game, where the Clippers, missing all over the place, only scored nine points in the game’s first 15 minutes.

“We didn’t hit every single shot we possibly could, but we just stuck it out at the end and played some better defense. Some shots you won’t make, but they won’t hit shots either if you’re playing good defense.”

Fredrickson agreed but added that Sullivan’s offense was also key to the first half.

“There was some stuff that we did leave there, but it was big the way that Elijah got out on transition and finished tonight, the way he attacked some of the bigs. He hit a couple of big threes early.”

The Clippers missed a couple more threes, but Sullivan took a long Rohlfing throw in for a layup, and Alex McCabe dashed across the floor for a layup to put the Clippers up 17-16.

“Everybody contributed,” Fredrickson said. “Al (McCabe) had a nice drive and bucket. Free throws were big.”

From there it was a teeter-totter fight. Mueller’s three put the Clippers up 29-27, but St. Clair responded with a basket.

“The effort level was crazy,” Fredrickson said. “They started out quick, playing fast. We got settled down quickly.

Fredrickson said the game's intensity tired Mueller out in the first half, but they needed him on the floor and used the minute breaks to keep him there.

"He wanted to sub a few times, but we don’t have a guard like that against that kind of pressure, so we tried to use our time outs in the first half as like a sub for him. But the way he handled the pressure tonight in that first half...an amazing job. Hitting the three pointers was big plus the free throws. Isaac was the man tonight."

Holden made a couple of free shots with 2:15 left in the half for a lead the Clippers would never surrender. From there to the break, the Clippers outscored the Cyclones 7-3. Sullivan punctuated the half with a steal and layup at the buzzer to put the Clippers up front 38-32 at the break.

The Cyclones were successful in just two three-point attempts in the first half.

“We were making them go high-low,” Fredrickson said. “They’re the highest scoring team in our whole entire session, and the game plan was to make sure we go out and guard the three-point shot. They had a game plan, going high-low, but we put them on their heels.”

But the Cyclones eventually got into an offensive rhythm. While Mueller made a trio of threes to keep the Clippers up front in the second half, the Cyclones took advantage of steals and five three-point baskets to pull within a point before Holden’s inside basket set the Clippers down the path to victory.

Holden and Mueller each had 22 points. Sullivan scored 20, and Rohlfing added 12. McCabe chipped in six points.

“It was the most intense game I’ve ever played,” Mueller said. “I made some threes. Ben had some and-ones. It was crazy.”

St. Clair posted 10 three-point baskets with eight of them in the second half. Derrik Zeldenrust, a 6-9 junior scored 20 points. Andree also had 20 points with all but two coming from behind the arc.

“They make it so hard on you,” Fredrickson said. "They make you guard all five positions, and with the big kid inside (Zeldenrust) and the soft touch he has. He make free throws. He changes the game defensively, but a game like this where it is up and down, he played limited minutes while Ben stayed on the floor the whole night. Some of those big rebounds and put backs that Ben had…those are big difference makers.”

The Clippers were coming off an laid-back 86-51 win over Alden-Conger/Glenville-Emmons on Friday. Mueller led that effort with 25 points. Holden had 21 points.

The Clippers easily beat host Immanuel Lutheran on Friday (look for a separate story) and, with a chance to take the conference lead outright, will have a grudge match at home against Loyola on Monday.

Alex McCabe dishes off after taking the ball inside.

Eric Rohlfing dribbles through his legs.

Ben Holden fights his way inside.