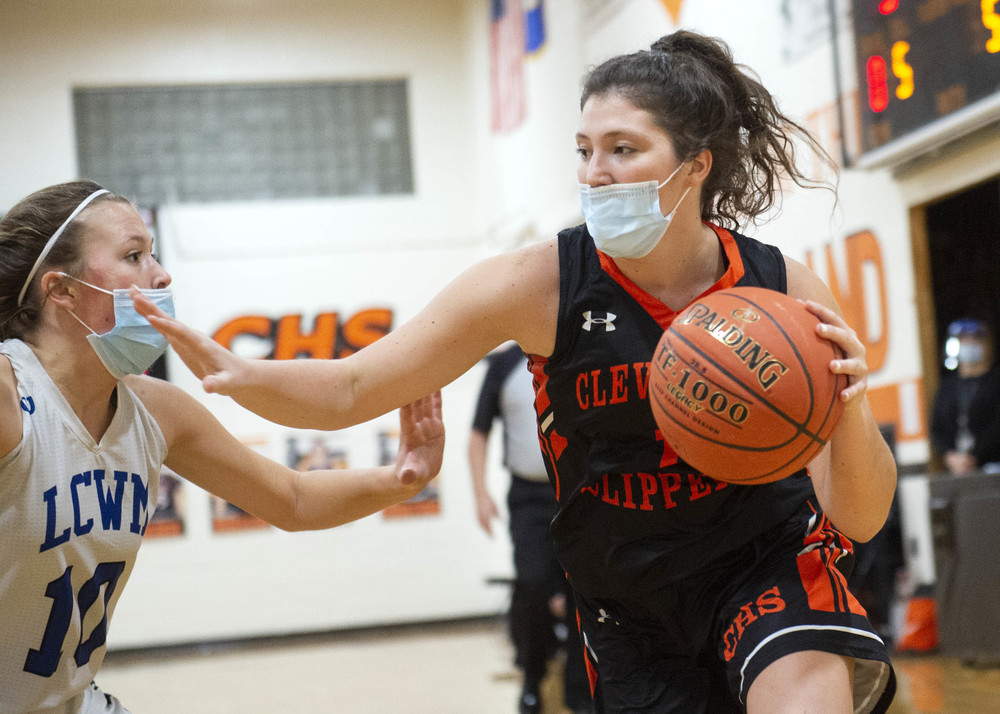 But the Clippers didn’t get their offense in high gear, couldn’t take care of the ball and fell 55-39.

Head coach Joe Remiger felt the Clippers were capable of a better showing against the now 6-0-in-the-Valley Knights, but they didn’t perform to their capabilities.

“How many times I felt we weren’t executing what we needed to get executed….we had three timeouts to say the exact same thing. I don’t know if they know how close they are to playing with these girls. We got where we needed to be, and I thought we were going to make that step to get up and be at least within three or four points so we’d be ok at the end, but we never got there.”

After Ziebarth’s basket, the Knights scored twice on steal possessions for an 8-7 lead. Laci Hollerich, who started in place of injured Sarena Remiger, made a free throw, and Kern took an in-bounds pass up for a basket to put the Clippers ahead, but the Knights took advantage of lackadaisical Clipper passes for three more steals and five points to go up front 13-10.

“I’m fine with a few turnovers,” Remiger said, “but these were too easy.”

Later, Kern scored on another in-bounds play, and Halle McCabe (above) took a Kern assist in for a layup. But the Knights sandwiched a Greta Hahn baseline basket  with  threes to lead 23-18.

As the half drew to a close, McCabe scored five more points, but the Knights added another three for a 28-23 advantage at the pause.

Remiger said filling in on defense was a problem for the Clippers in the first half, but they tightened up after that.

“LCWM would line up four at the free-throw line, and we would let a girl get layups. We just one-on-oned her, and no one helped out on the help line. The second half, I didn’t see happen, so I am glad they were able to recognize that.”

McCabe took a Ziebarth assist in from the free-throw line for the first basket of the second half, but the Knights, back on the seal, scored the next 11 points.

The Clippers made a 10-point run later in the second half though. Karels stole and then took a Kern pass in for a basket. Ziebarth hit a three, McCabe twisted inside for a basket and made the ensuing free shot and Kern took a Karels handoff inside to pull the Clippers within seven, 46-39.

But the Knights stopped the rally with a three, slowed the game down and did not allow the Clippers to score again.

The Clippers miss what Sarena Remiger brings defensively and in rebounding, but the Hollerich did a good job filling in, Remiger said.

“Look at Laci tonight, the defensive rebounding. It’s good that they’re stepping in. Greta got a lot of time tonight.”

But Remiger was expecting more out of the offense.

“Maybe it’s the thought that we are playing against the top team in the conference, but I’ve told these girls we’ve played with every single team we played with except for one half down at Martin County West….and we’ve played some good teams. I’m encouraged with that, but I’m disappointed about tonight because I expected more: at least execute what we’ve drawn up. Their 1-3-1 defense shouldn’t have been hard to break, and we broke it sometimes, but right away we’re jacking up shots instead of making their defense have to work.”

McCabe led the Clipper effort with 12 points. Kern had 10 points. Karels and Ziebarth both had a two and a three for five points each. Hahn had a basket in each half for four points. Hollerich made three free shots in the first half for a total of three points. The Clippers made five of seven free throw attempts.

Carter will miss the rest of high school sports, but fortunately her athletic career is not ended as she will go on to play basketball at GAC.

The Clippers will host Tri-City United on Tuesday. The Titans are 2-9 with one match-up in common with the Clippers: they lost to St. Clair in their season opener 62-54.

Emily Kern takes the ball through a traffic jam.