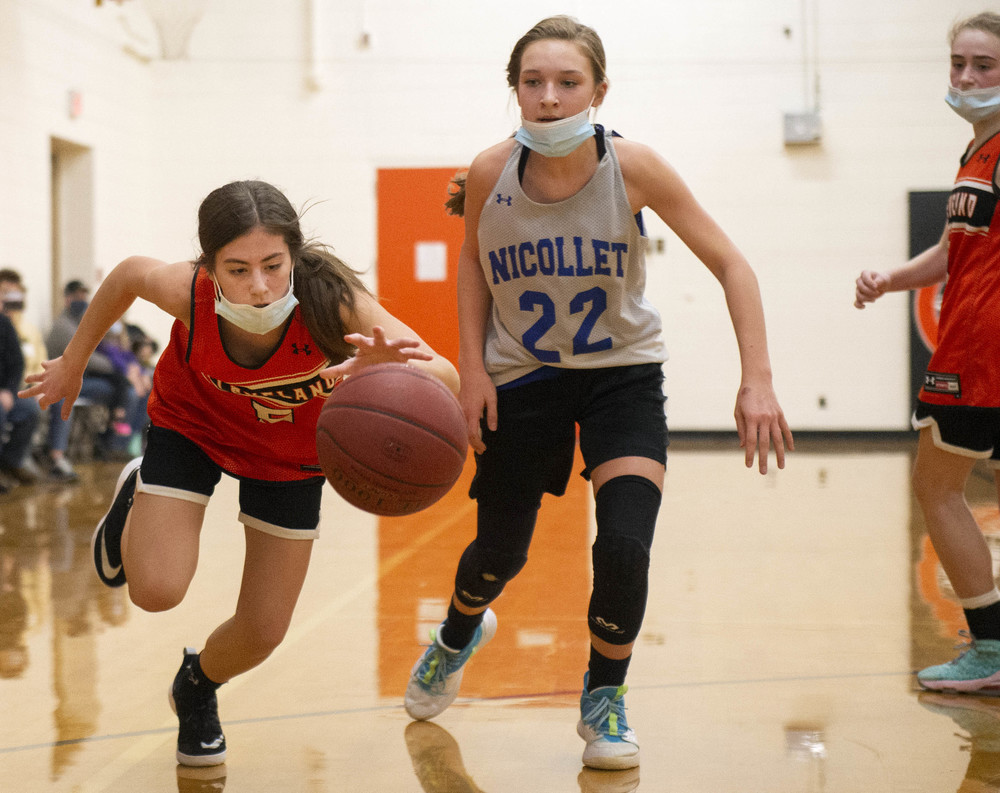 Leading by 13 in the final minutes, it looked like the junior high girls had a win all sewn up against visiting Nicollet/Loyola on Thursday, but the Raiders scored the final 15 points to defeat the Clippers 35-33.

“It was bad decisions and trying to push the ball where it didn’t belong,” said Brady Hahn, who had coaching duties in the absence of regular coach Christian Harmeyer.

Lacey McCabe (above) scored from under the rim for the game’s first points. The Raiders answered with a couple of steals for baskets, but Ava Hahn scored on a drive for a 4-4 tie.

McCabe found a vacant trail to the mesh and then took an Addi Holden assist in for a layup for four more Clipper points. Trading favors, Holden scored inside on a McCabe handoff to put the Clippers up 10-8.

McCabe put an in-bounds pass through the net and then iced two free shots, Holden scored from inside, and Taylor McCabe took a Sierra McCabe toss in for the final first-half basket.

The Raiders scored inside for the first basket of the second half. McCabe made the second of two free shots, and Olivia Reinhardt scored after a Hahn assist. After Holden made the first of two freebies, Hahn drove the floor for a layup, McCabe hit two foul shots, and Hahn scored on another layup.

With the Clippers up 28-20, McCabe made three baseline drive attempts, grabbing her own rebound after the first two before she scored on the third try. After her and-one, it was McCabe again, this time cashing in after a steal and end-to-end drive to add two more points for a 33-20 Orange & Black advantage.

But with the Clippers yielding to the press, it was all Raiders the rest of the way.

With 1:13 remaining, the Clippers, still up by four, got the possession when McCabe tied up the ball, but they didn’t attempt to drain the clock. Nicollet/Loyola hit a pair of free shots with seconds left to pull within a basket, stole and scored for the tie and then put in a basket from under the rim with 1.5 seconds left to take the lead.

Holden got off a shot just before the buzzer, but she wasn’t within range.

Lacey McCabe led the effort with 18 points, six of them from the foul line. Hahn had three baskets for six points. Holden put in two baskets and one free throw for five points. Reinhardt and Taylor McCabe each chipped in two points.

The Clippers return to action when they travel to St. Clair on Tuesday.

Addi Holden went to the foul line after this shot.

Sierra McCabe on the puts up a shot in the first half.

Ava Hahn on the jumper.