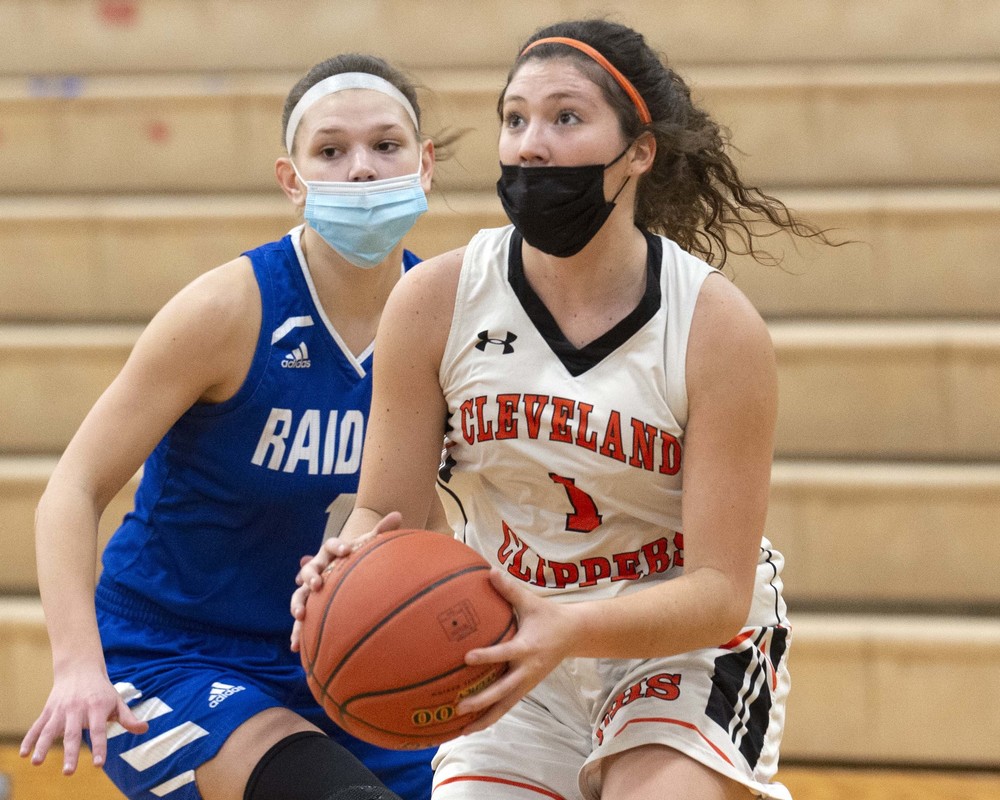 After eight-straight missed free throws down the stretch, the varsity girls gave host Nicollet/Loyola a chance on Thursday, but the Raiders missed  a needed three just before the buzzer, and the Clippers went on to beat the Raiders for the second time this year, this time 50-47.

“Free throws should have put them away, but we let them keep hanging around,” said head coach Joe Remiger.

With Halle McCabe (above) icing her knee on the bench and Laci Hollerich fouled out late in the second half, two starters were absent when Macey Ziebarth made a free throw to put the Clippers up 47-40.

The Clippers, typically accurate from the charity line, missed four-straight free throws after that. The Raiders, not productive either, managed to make a free shot, but Kaylee Karels scored on layup for a 49-41 lead.

“The first game of the season all we wanted to do was run the clock down with two minutes, but all of a sudden we were just going to go, go, go,” Remiger said.

Earlier, the Raiders used the three to get back in business, and once again they went behind the arc for a basket that narrowed their deficit to five with 37 seconds left. The Clippers missed two more sets of two fouls shots, and with 12 seconds left, the Raiders made another three to pull within a bucket, 49-47.

Back at the line, Ziebarth’s first free throw bounced off the rim, but she made her second. The Raiders had a chance to tie with a three, but the shot ricocheted into the hands of Karels, who sprinted it to safety, and the Clippers escaped Nicollet with the victory.

“We told the girls at the end ‘there’s a lot of things we didn’t execute or didn’t finish or thing we were frustrated with, but anytime you can walk in an away gymnasium and come away with a win, it’s a good thing,’” Remiger said.

The Clippers were in front the entire game. Ziebarth grabbed a Karels fling in for a layup and the game’s first basket. After a McCabe steal, Ziebarth scored on a jumper, and Emily Kern took and in-bounds pass up and in for a 6-5 Clipper lead.

McCabe drove the baseline for a basket. The Raiders responded with a three, but Karels scored on a drive, and Sarena Remiger, back on the floor after sitting out both games last week due to an ankle injury, grabbed a Kern pass and spun for a bucket that put the Clippers up 12-8.

With a dozen turnovers between them, neither team wanted much to do with the ball after that. But McCabe scored a couple times in the fracas, and Karels calmed the water with a three to put the Clippers up 19-13.

With a three off the hands of Ziebarth, the Clippers led 22-17 at the recess.

Nicollet/Loyola came out of the locker room with a three. Karels canceled it right away with her shot from the corner, but the Raiders scored again from across the arc to pull within a basket 25-23.

The Clippers got a little breathing room when Remiger stole and sprinted down the floor for a layup, and Karels hit another three. Remiger pulled down a rebound after a missed Cleveland free throw, and with Karels scoring on the play, the Clippers were up 35-26.

Trying to catch up, the Raiders canned a pair of threes, but McCabe, Ziebarth and Kern each scored from the floor, and Remiger twisted inside for a basket that put the Clippers up 45-33.

After Nicollet scored from the floor, McCabe injured the same knee that kept her out of sports all last year. After a three and a two, the Raiders pulled within six, 46-40 before Ziebarth, added a point from the free-throw line. A Ziebarth free throw was also the Clippers' point 46.

Karels led the Clippers with 19 points, including a hat trick of threes. With a dozen points, Ziebarth was also in double figures. Remiger and Kern each scored six points. The Clippers made eight of 24 foul shots.

McCabe, who has been really coming on strong lately, had seven points before she left the game.

“Let’s not plan the worst; let’s hope for the best,” Remiger said.

On Tuesday, the Clippers got beat up by 61-23 by visiting Tri-City United.

TCU led 30-20 at the break. Cleveland’s starters didn’t post a point in the second half. Greta Hahn made the only basket from the floor, and Emma Treanor made a free throw for the three Clipper second-half points.

Ziebarth led the team with 14 points, which included one basket from behind the arc and 11 in back of the foul stripe. Halle McCabe added six points. Hahn scored two points, and Treanor made a free throw.

The Titans had 20 steals, 14 more than the Clippers.

Remiger said it was the first game the Clippers had two tall players to try to guard, but they didn’t get together on the other side of the floor either.

The Clippers will have a chance to avenge an earlier loss to visiting St. Clair on Tuesday. 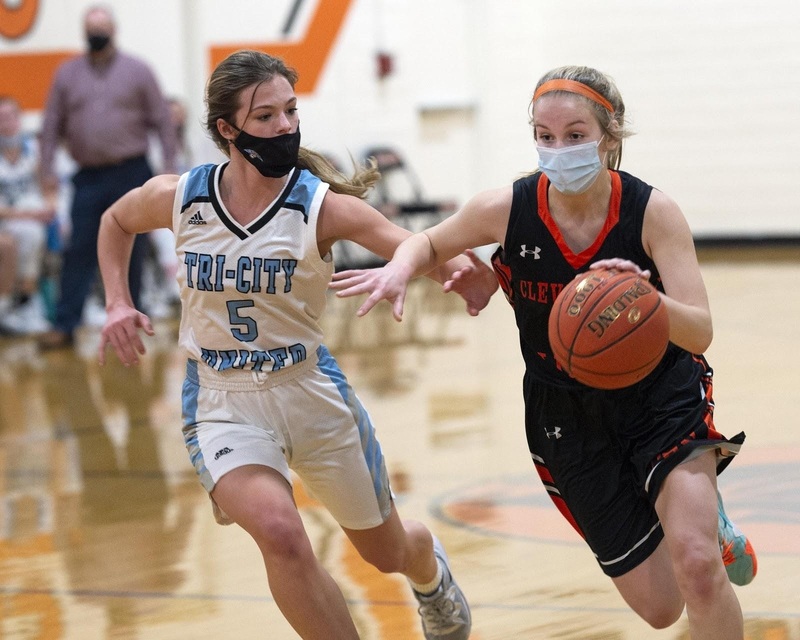 Macey Ziebarth races down court at home against TCU. 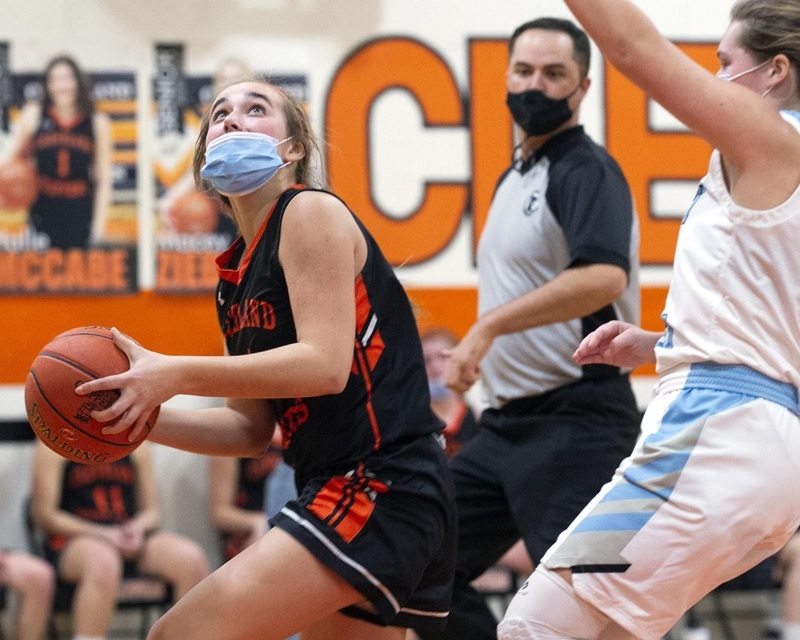 Starting for the injured Sarena Remiger, Lacey Hollerich goes up for a shot after making a steal. 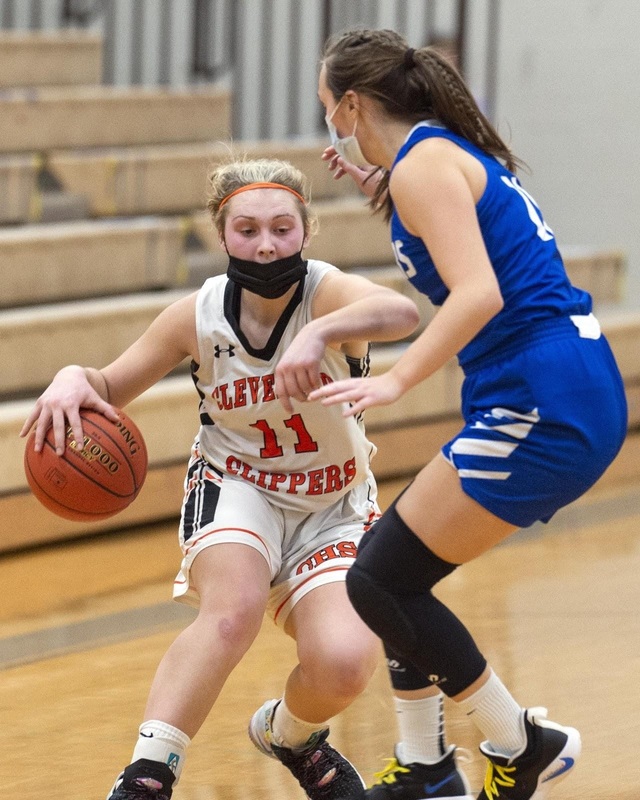 Kaylee Karels pulls up against a Nicollet/Loyola defender. 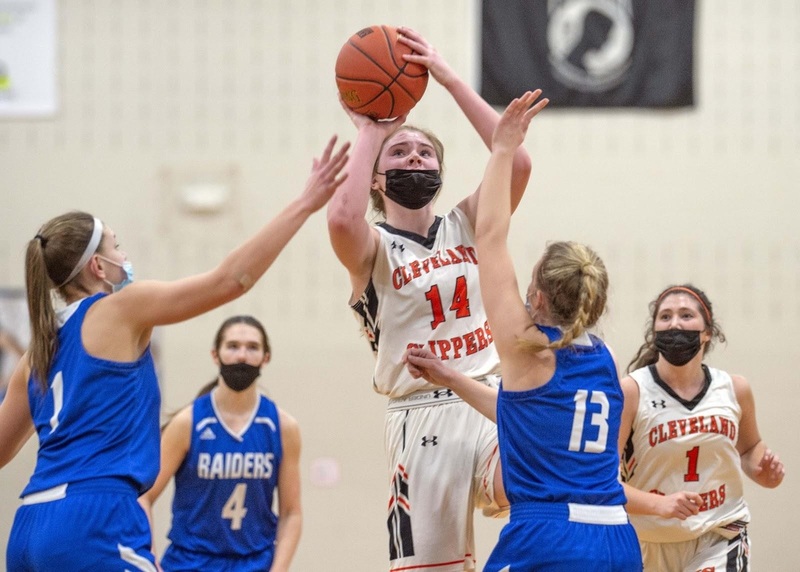 Emily Kern puts up a shot on the transition. 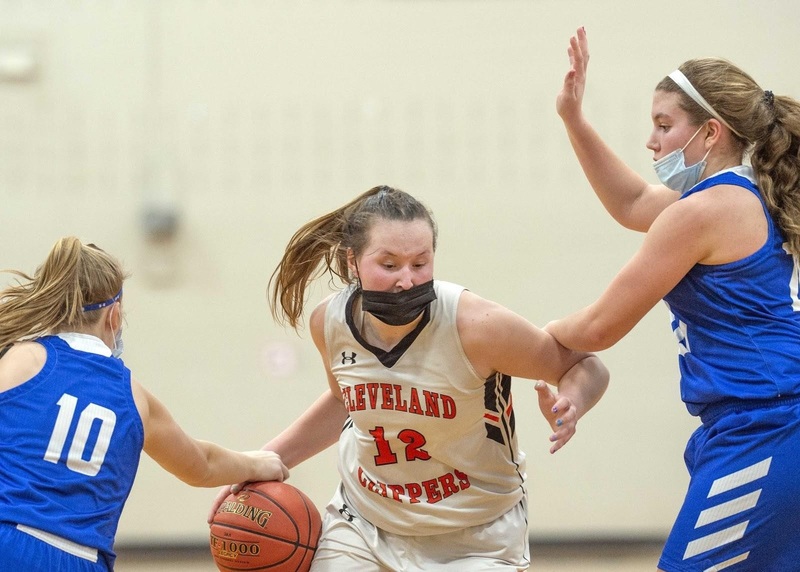 Sarena Remiger was back in action at Nicollet after a hurt ankle kept her out of both games last week.