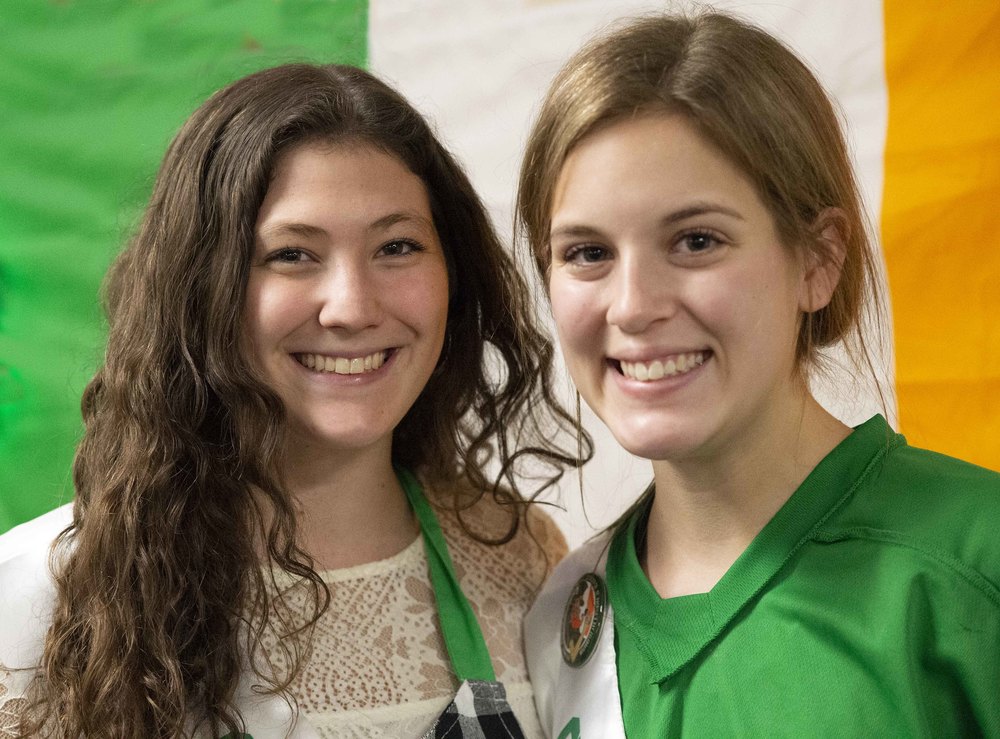 Most of the competition to decide who will be Le Sueur County's Miss Shamrock takes place off stage, but Halle McCabe (left) and Nicole McCabe (right) performed in front of family and friends during a talent show at the Le Center Legion on Saturday afternoon

The two CHS seniors were among four girls vying to reign over next week’s Le Center St. Patrick’s Day celebration.

Choosing the best fit for Miss Shamrock and runners-up Miss Leprechaun and Miss Irish Rose is never easy,  but this year it will be more difficult than ever, said Pat Kane, one of the three judges presiding over the contest.

“The talent probably accounts for only a quarter,” said Kane, who is now in her 13th year as a judge, “but the talent was so different this year. It was really entertaining, so that makes it really hard to judge.”

Nicole McCabe performed a “Shamrock Shootout,” a skit in which one side of her family: her cousin, uncle and great uncle on her mother’s side—represented with cardboard figures—competed in a hockey shootout against the other side: her father, grandfather and great grandfather, also on stage in effigy. McCabe donned the hat the figure was wearing before she shot a ball into a hockey net.

Halle McCabe—a relative of Nicole’s albeit a distant one—presented an “Irish Taste Off,” a skit in which older sister Julia McCabe (Miss Shamrock 2019) and cousin Alissa (McCabe) Gibbs (Miss Leprechaun 2000) competed. Both blindfolded, Halle spoon fed them Mulligan stew, soda bread, Irish apple cake…The quickest to shout out the name of the food won the round.

Both McCabes said preparing for the contest was nerve-racking. They were glad when it was over...but it was worth it.

“My family is very big into this celebration,” said Nicole McCabe. “Every one of my cousins has done it. I’m the last grandkid, so they really pushed me to do it, but I’m really glad I did. It’s been so much fun so far, getting to know the other girls more…and I learned more about my Irish heritage that I probably wouldn’t know if I didn’t do this, so it has been a really cool experience.”

“Ever since I was a little girl, I’ve dreamt of being up there,” said Halle McCabe. “We have a strong Irish heritage with my family, so it means a lot to my grandma for us to be up here. You don’t know what to expect, but it turned out really well.”

Brooke Blaschko, a Tri-City senior, was in quarantine for the competition, but her pre-recorded dance skit was shown on screen. Alexis O’Connell, also a TCU senior, recited a poem she wrote as a tribute to a deceased relative.

Besides constructing a family tree—on display in the Legion's hallway—as part of the contest, the four girls were interviewed privately by the judges before the talent contest.

“The questions we ask are to get to know them, really as how they will represent the town and St. Patrick’s Day festivities in general,” said Joan Larson, who is now in her 11th year of judging the competition. “All four of them were just really, really good. It is very hard to judge.”

Ken Odenthal, who is now in his eighth year of judging the contest, also said it would be hard to choose a winner.

“The girls were all very personable, very bubbly, very outgoing. This is the first year that the skits were all original, so a lot of props for that.”

Earning the top crown means $3000 in scholarship money. Runner-up (Miss Leprechaun) gets a $2000 scholarship, and third-place winner (Miss Irish Rose) takes home a $1000 scholarship. There is also a $1000 John Gregory O’Connell Memorial Scholarship, which can be awarded to any of the girls. Participants receive $200.

The Le Center St. Patrick’s Day coronation has taken place for the last 38 years. To participate, girls must be 17 to 21 years old, attend high school or a post-secondary school and be of Irish ancestry. They must also reside in Le Sueur County, or their parents, grandparents or applicant must be members of Le Center’s American Legion Post 108.

Miss Shamrock and her court also represent Le Center’s St. Patrick’s Day celebration and their Irish heritage at Southern Minnesota events: parades and the like at area towns.

“I would really encourage anyone to do it,” Halle McCabe said. “I told the judges in my interview that I’m going to really push my sisters to do it because it’s a lot of fun. You meet a bunch of people from different schools and you get the experience to learn more about your family.”

“I really don’t think they should think of the talent show as a reason to not participate,” said Nicole McCabe. “I know a lot of people thought of that, and they didn’t want to do it, but it was so much fun, and it was worth everything. I will never forget this experience, so if they can do it, I think they should do it.” 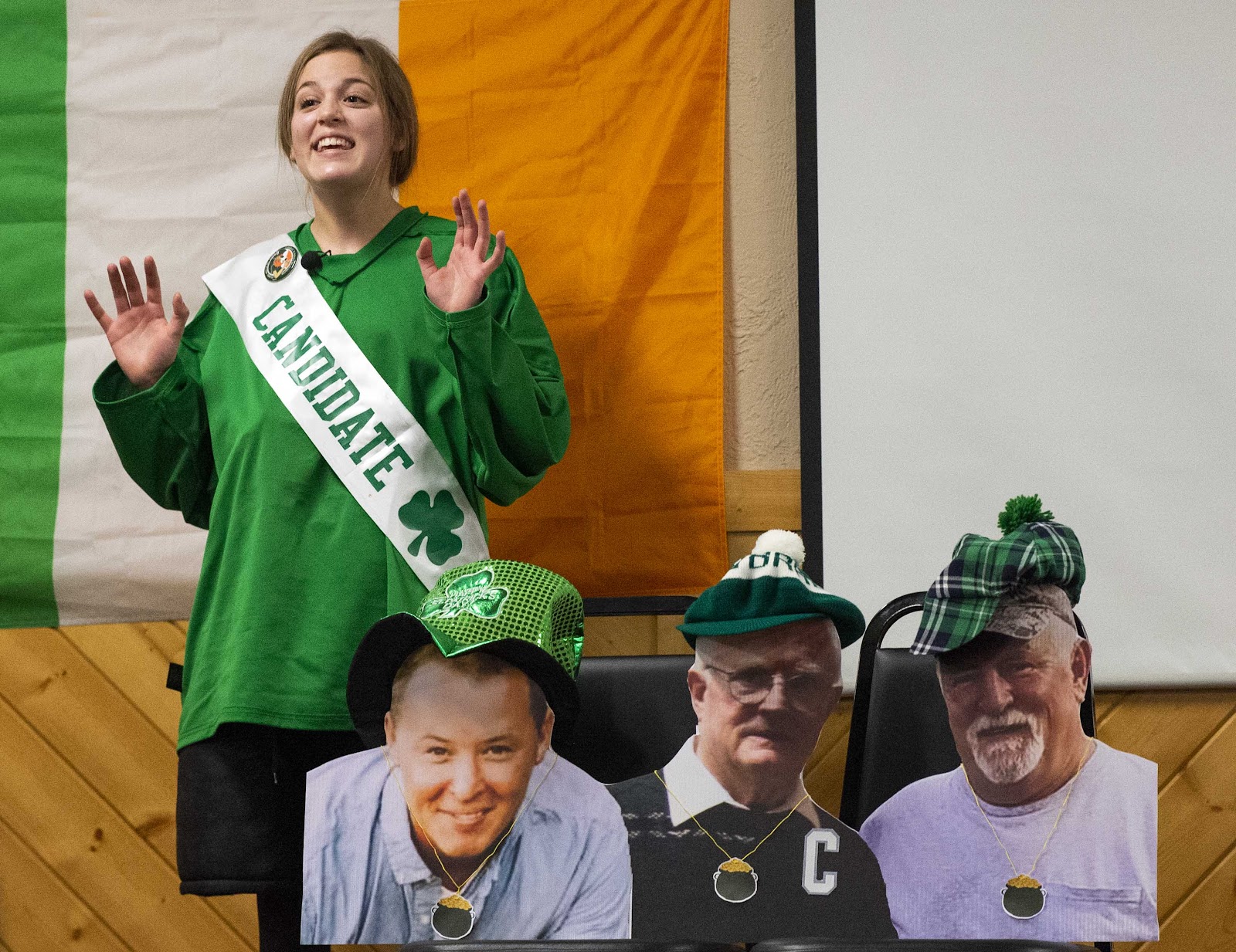 In cardboard cutouts, Nicole McCabe’s cousin, uncle and great uncle on her mom’s side were part of the skit. Nearby were similar figures of her dad, grandfather and great grandfather. 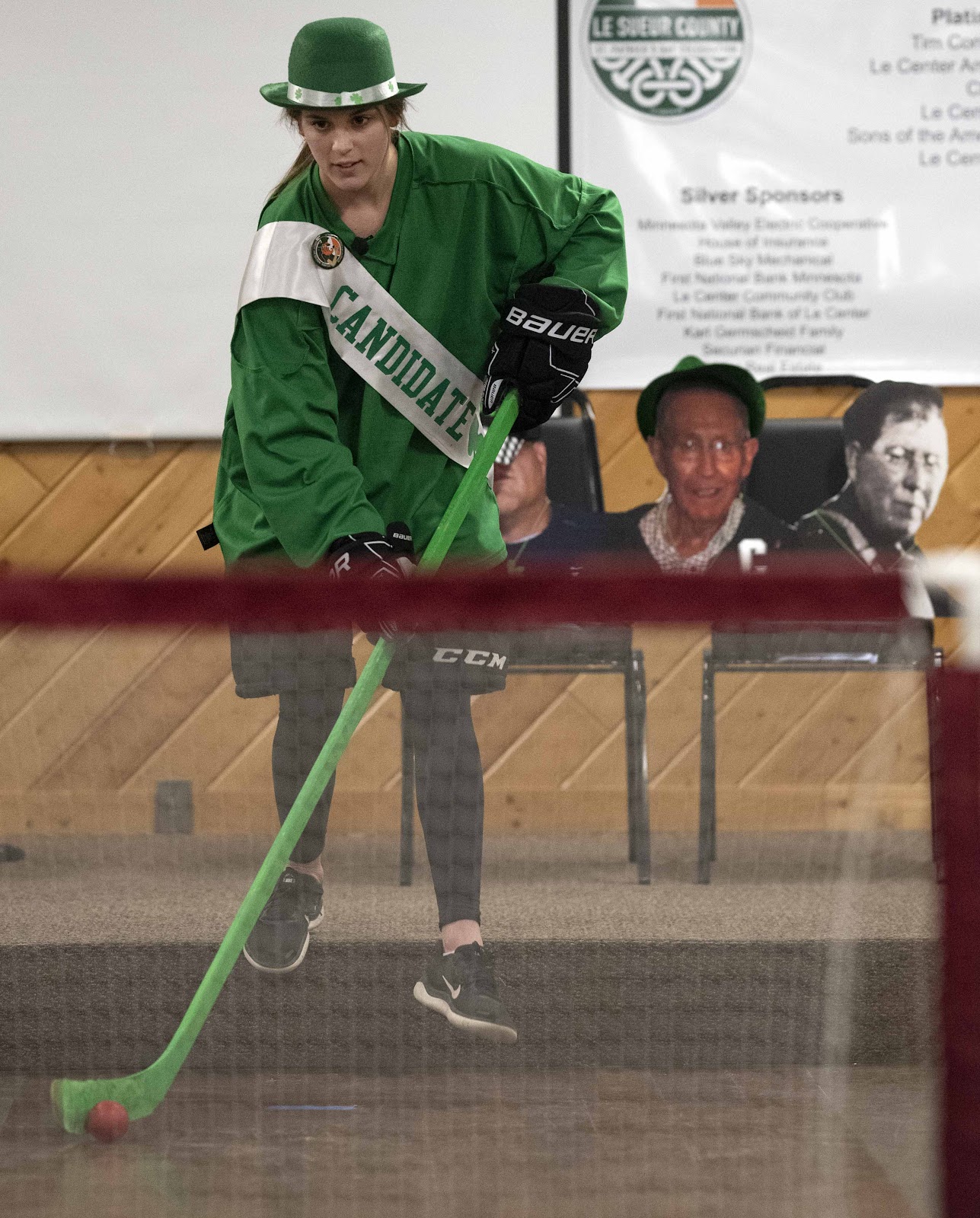 Representing her great grandfather (right in back) via the green derby, Nicole McCabe takes a shot at the goal. 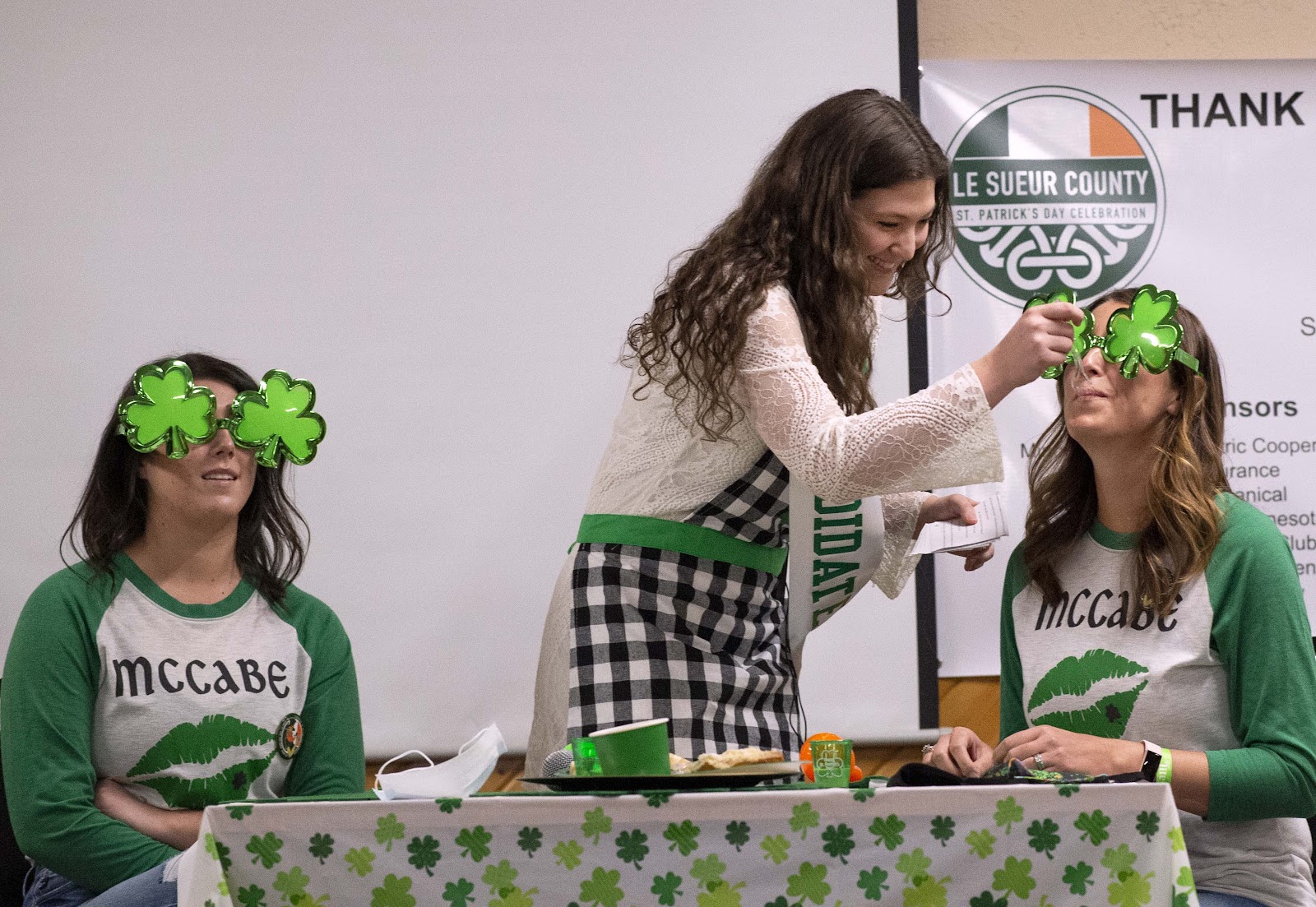 Halle McCabe pitted her sister Julia (left) against her cousin Alissa (McCabe) Gibbs in a tasting contest. The winner was the quickest to name the Irish food or drink. 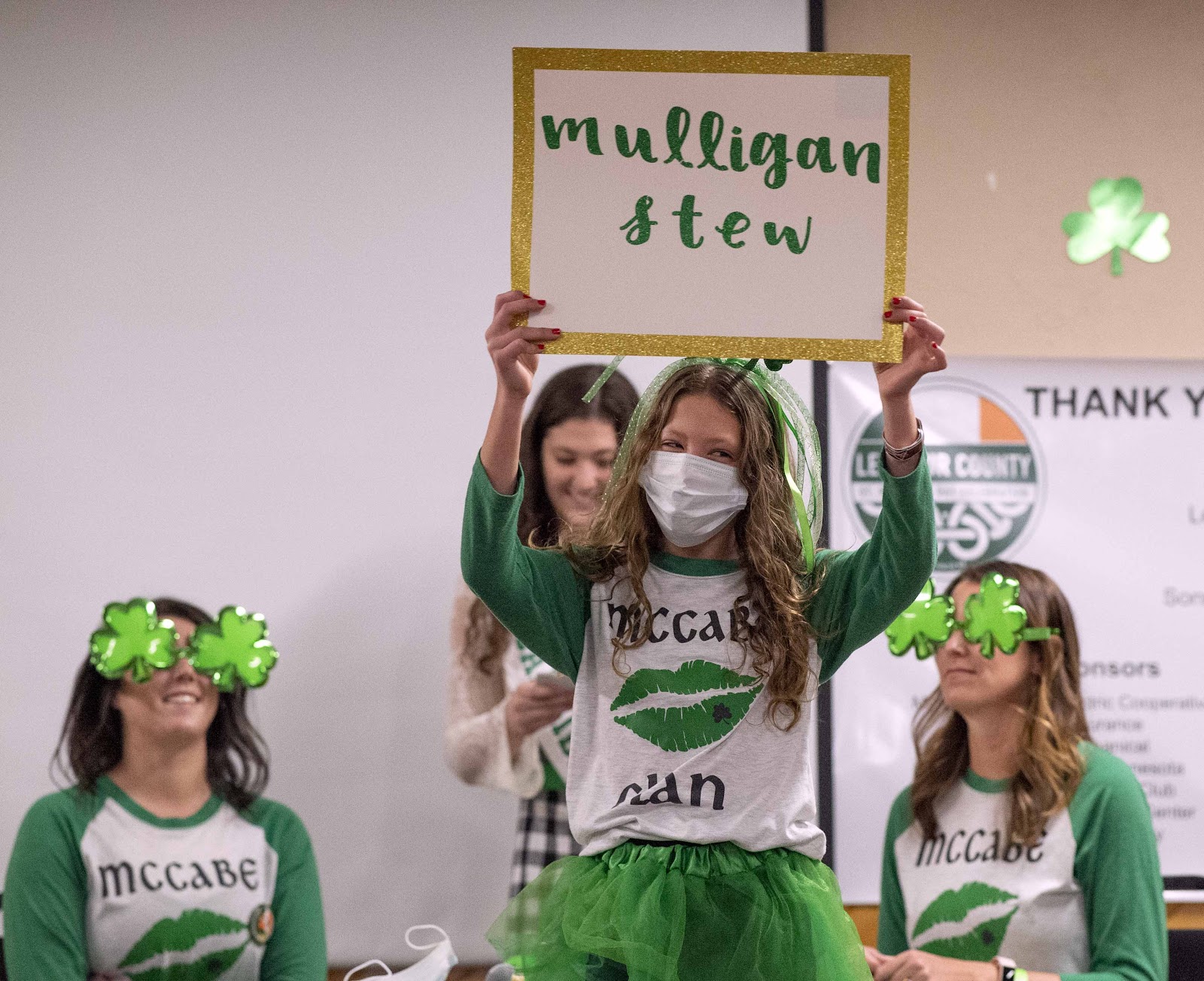 Halle McCabe hopes that her youngest sister, sixth grader Taylor McCabe, will be competing for Miss Shamrock in six years. On Saturday, she showed the crowd what the two contestants would be tasting. 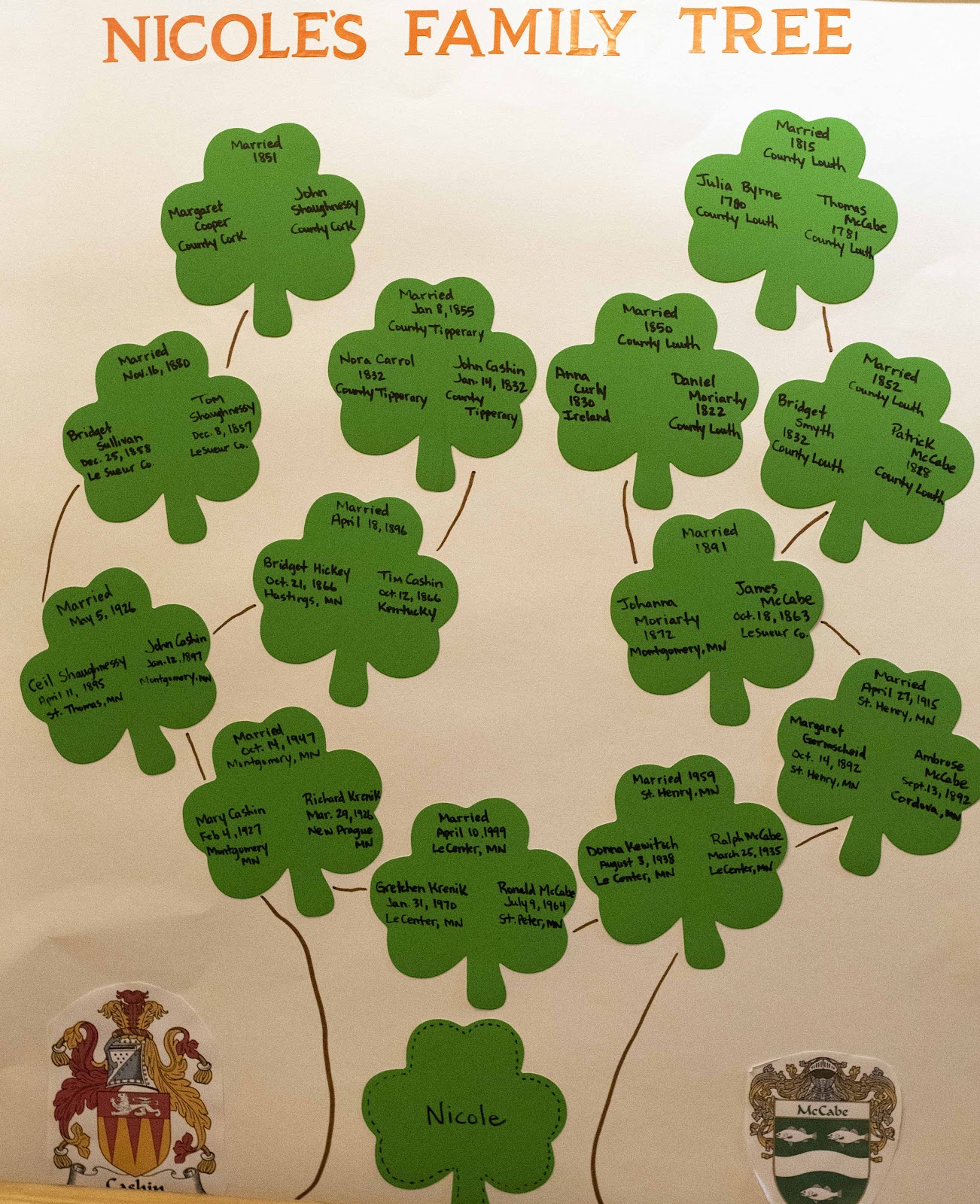 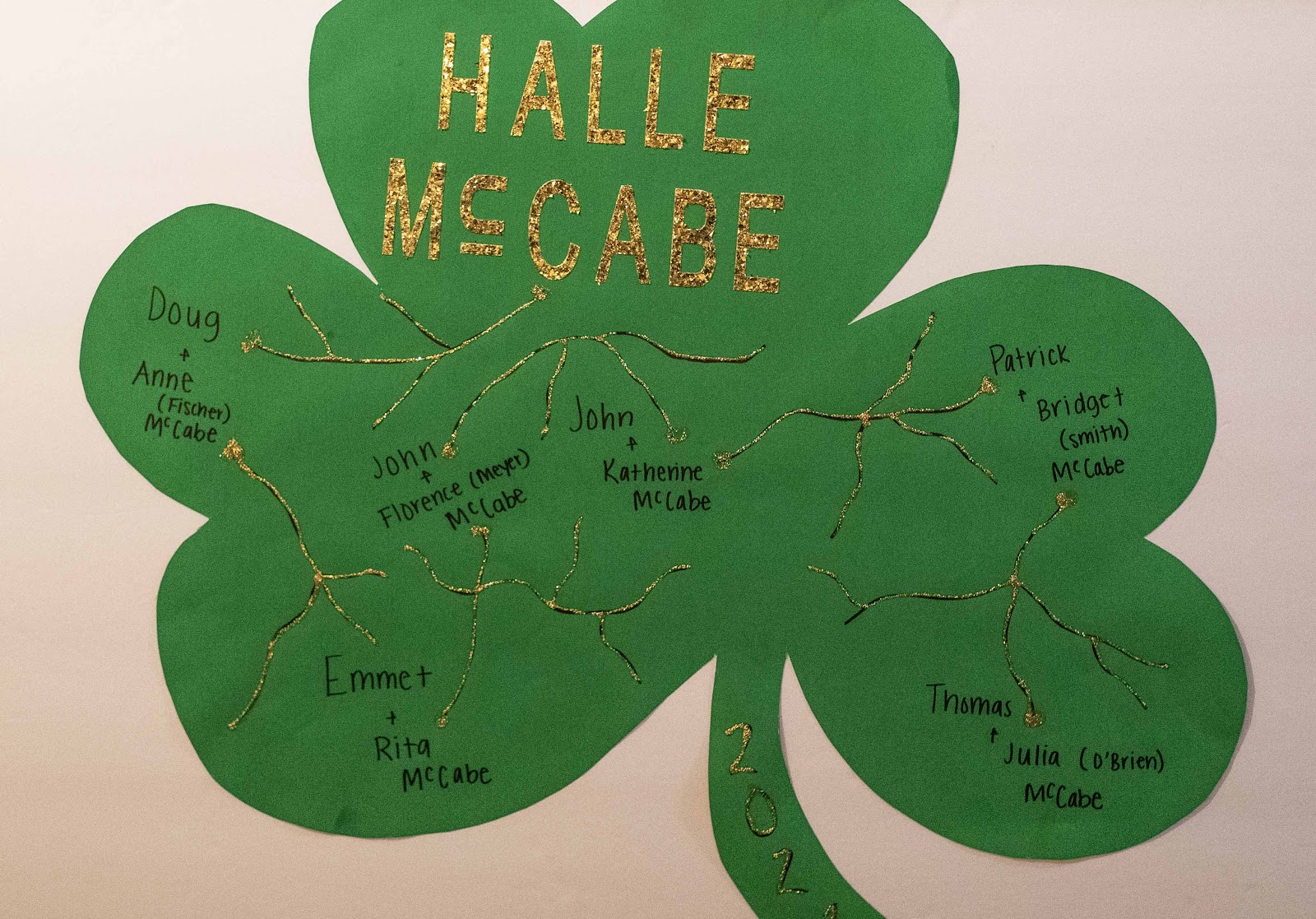