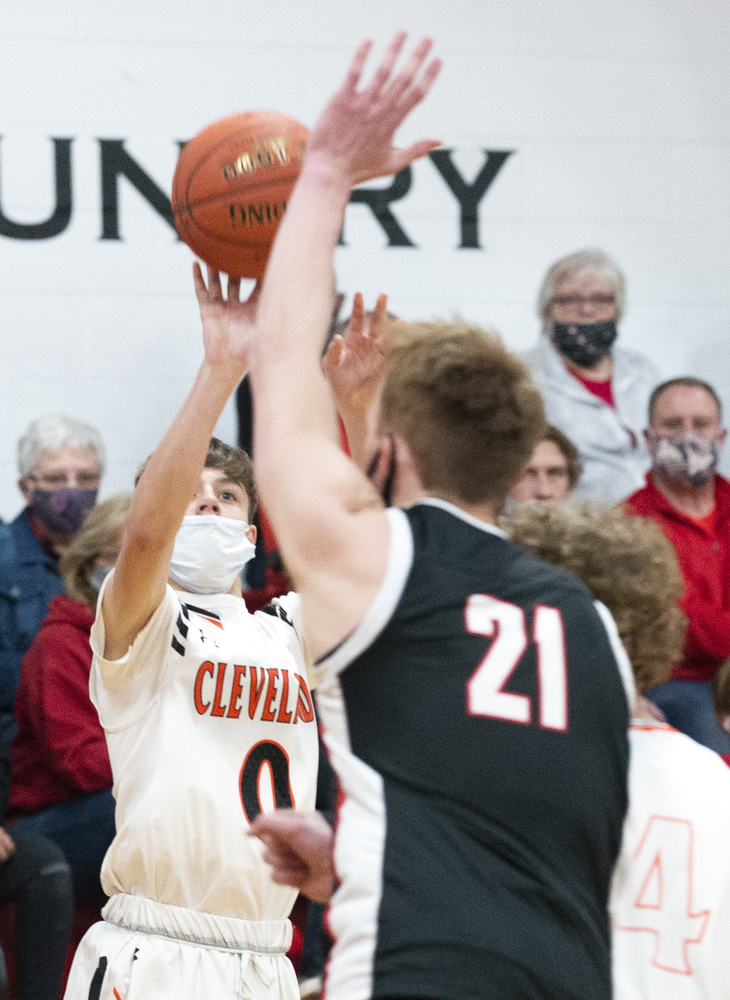 Packed in a black plastic bag, the poster Addie Holden brought into the Mayer Lutheran gym on Saturday recognized older brother Ben for a career 1000 rebounds.

The sign was speculative though. While the eighth grader hoped to unveil it sometime during the game’s 36 minutes, her sibling ended up a rebound shy of the 13 he needed to reach the milestone, and the poster stayed in its package.

But for Addie and Ben Holden too, it didn’t matter. Cleveland upset the top-seeded Crusaders 56-52 in overtime, and the poster will travel to Sleepy Eye St. Mary’s on Wednesday when the fourth-ranked Clippers compete against the second-seeded Knights in the subsection championship.

“I wasn’t even thinking about a thousand rebounds,” said Ben Holden, a 6-6 senior who missed some shots early but made the baskets he needed down the stretch. “The win is worth everything. There’s no feeling like this, not for a thousand of anything.”

After winning the OT jump, Mayer Lutheran burned a minute and 10 seconds before scoring. Following up, Isaac Mueller took a Holden assist up for a three-point basket that put the Clippers ahead by a point, and they got the ball back when a long Crusader shot flew out of bounds.

Head coach Dan Fredrickson said keeping the ball away from the Crusader’s 6-7 junior Tiegen Martin was key. While Martin hammered the ball inside for eight baskets in the second half, the Clippers shut him out in the OT.

“Everything for him was baseline screen, so we wanted Ben to sit on the baseline. We did a good job in overtime on not letting him get touches. Elijah (Sullivan) and Alex (McCabe) did a good job help side so they couldn’t go inside high wall.”

The Crusader’s quickly regained possession on a steal, but Sullivan stepped in front of a long in-bounds pass and tossed it to McCabe, who quickly relayed the ball back to Sullivan for a layup and a 53-50 Clipper advantage with 40 seconds remaining.

“You could just see steal in his eyes,” Fredrickson said.

The Crusaders scored on a baseline jumper 10 seconds later but fouled Mueller in the back court right after. Mueller made both of his shots from the charity stripe to put the Clippers back up by three.

McCabe wrapped up the rebound after the Crusaders missed another three, and Mueller made the first of two free throws to put the finishing touches on the triumph.

“We were the fourth seed and so felt totally disrespected for that,” Mueller said. “So we used that for motivation and came here and pulled out the win.”

With an unrelenting defense, Cleveland got off to a good start. Sullivan’s three and layup put the Clippers up 5-0, but missed easy shots, off-target threes and four passes that sailed out of bounds helped Mayer to go ahead 18-11.

“I think it was nerves,” Holden said. “We’re an old team, but we haven’t played in too many games like this, and we needed a little bit to settle down.”

But McCabe’s steal and shore-to-shore drive for a layup was the start of a rally late in the first half. Sullivan sunk a three, and Mueller made two fouls shots to propel the Clippers within two, 20-18, at the intermission.

“They kind of punched us in the mouth, but we stayed in the moment,” Fredrickson said.

After a McCabe steal, Holden took a Mueller assist in for a basket to tie the game at 24 early in the second half. Sullivan made a three to put the Clippers up 27-26, but the Crusaders, working the ball into Martin, scored the next five points before Eric Rohlfing put a Sullivan handoff in for a basket.

Mayer Lutheran responded with another inside basket, but Sullivan popped another three, and the Clippers trailed by only a point, 33-32.

Mueller navigated inside for a basket, and Rohlfing buried a three to again pull Cleveland within a point, 40-39 midway through the second half. The Crusaders looped in a three, but with his fifth basket from behind the arc, Sullivan canceled it to pull the Clippers back within a point.

From there, Martin’s backward shot from the baseline ricocheted off the bottom of the rim and into the hands of McCabe. McCabe almost lost the ball on the way down court but recovered and tossed it to Sullivan, who was waiting in the corner.

Sullivan’s three-point attempt caromed off the rim, but he somehow tracked down the rebound and lasered it to Holden under the net for an easy basket that put the Clippers in front 44-43.

The Crusader’s ensuing three pointer bounced off the rim. Mueller tipped the rebound to Holden. Back in Clipper territory, McCabe banged his way through two defenders and fired a pass to Holden, who made a layup that put the Clippers in front 46-43.

On the ensuing Crusader possession, Martin hauled in an offensive rebound and scored. After both teams wasted a three-point shot, the Crusaders broke away after a steal, missed the layup but pulled down the rebound. Sullivan wisely committed the foul to keep the ball out of the basket, but making the second of the two free shots, the Crusaders tied the game with 1:44 remaining.

Back on the Clipper side, as Holden spun inside, a Crusader stripped the ball away, and Martin’s backward basket after put Mayer up 48-46.

But Holden made up for the fumble on next trip down. Taking a Mueller pass, he pivoted right and then left before putting the ball up and in to knot the game at 48 with 18 seconds remaining.

Once again, the Crusaders couldn’t penetrate the Clipper defense. After a time out with 6.8 seconds left, they managed to get off a couple of outside shots but didn’t score, and the game advanced into the 4-minute overtime.

“Every possession at the end, we just guarded, and the kids were just tough” Fredrickson said. “Elijah a big shot…Isaac a big three…Eric a big three…Ben a big finish…Isaac, huge free throws…everybody contributing. The way we were getting to them defensively was just awesome. In overtime, on the road, in an environment like this…it was an incredible win.”

The Clippers needed to balance their scoring compared their game against New Ulm Cathedral and did with Sullivan pacing the Clippers with 18 points, Mueller scoring 15 points and Holden also in double figures with 14 points.

Rohlfing contributed five points while McCabe chipped in four points. Only Mueller and Holden went to the foul line. Mueller sunk five of six while Holden made two of five. Sullivan made six swipes.

With Mueller shooting his second free throw with 2.3 seconds left in the first half, Lucas Walechka and Cameron Seely checked into the game, but other than that, the starters never left the floor.

Mueller was limited defensively after four fouls starting at the 9:28 mark.

“I just took myself out of the defense,” he said. “I was just kind of a decoy. I stood in front and didn’t reach for a ball.”

Mayer Lutheran put in two three pointers and was successful in half of their dozen free throw attempts.

Sleepy Eye St. Mary’s (now 17-3), won 88-73 over Lester Prairie  to get to the subsection final. They beat New Ulm Cathedral twice in the regular season but fell to Truman/Martin Luther/Granada-Huntley-East Chain, a team Cleveland beat. 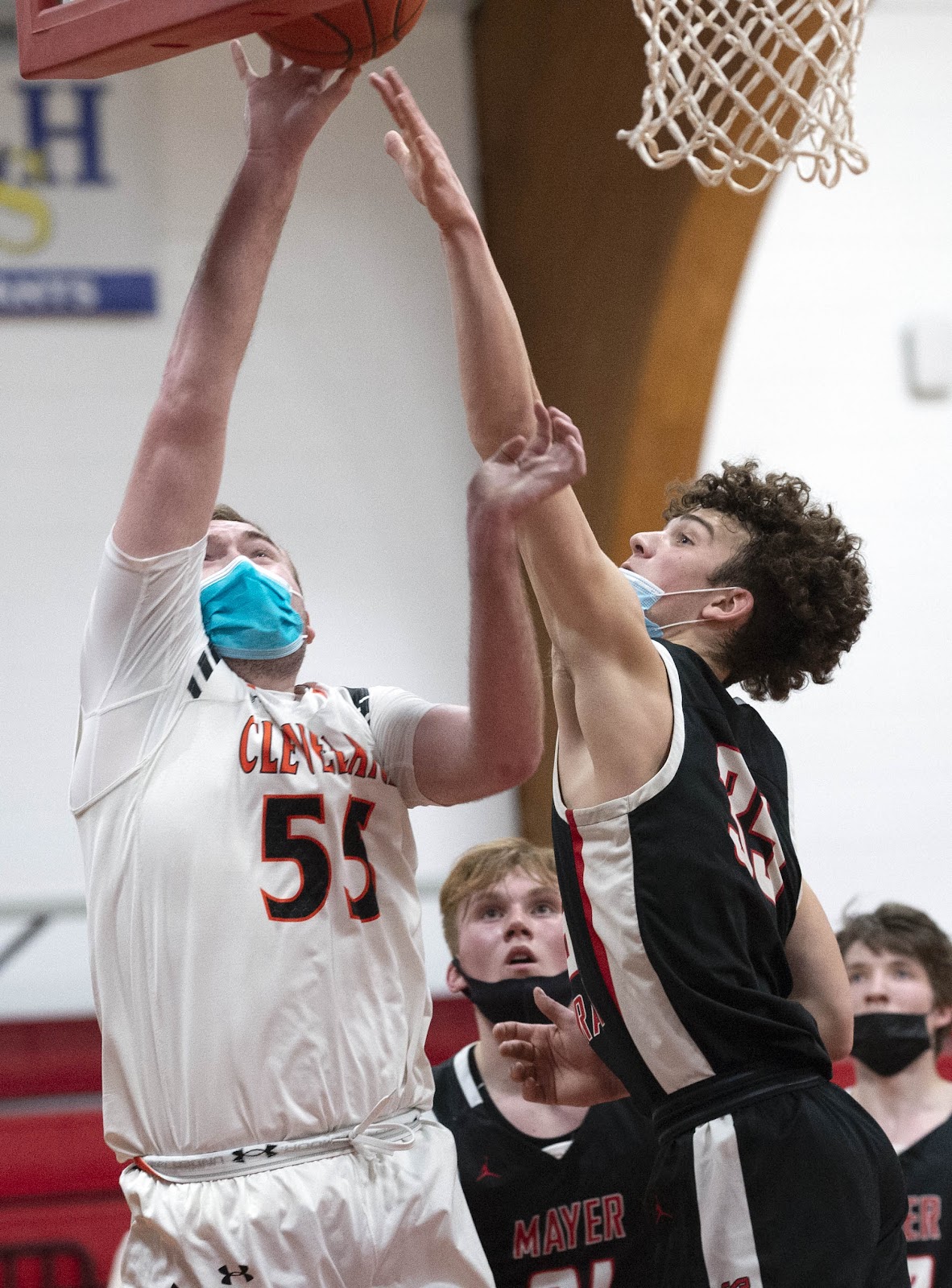 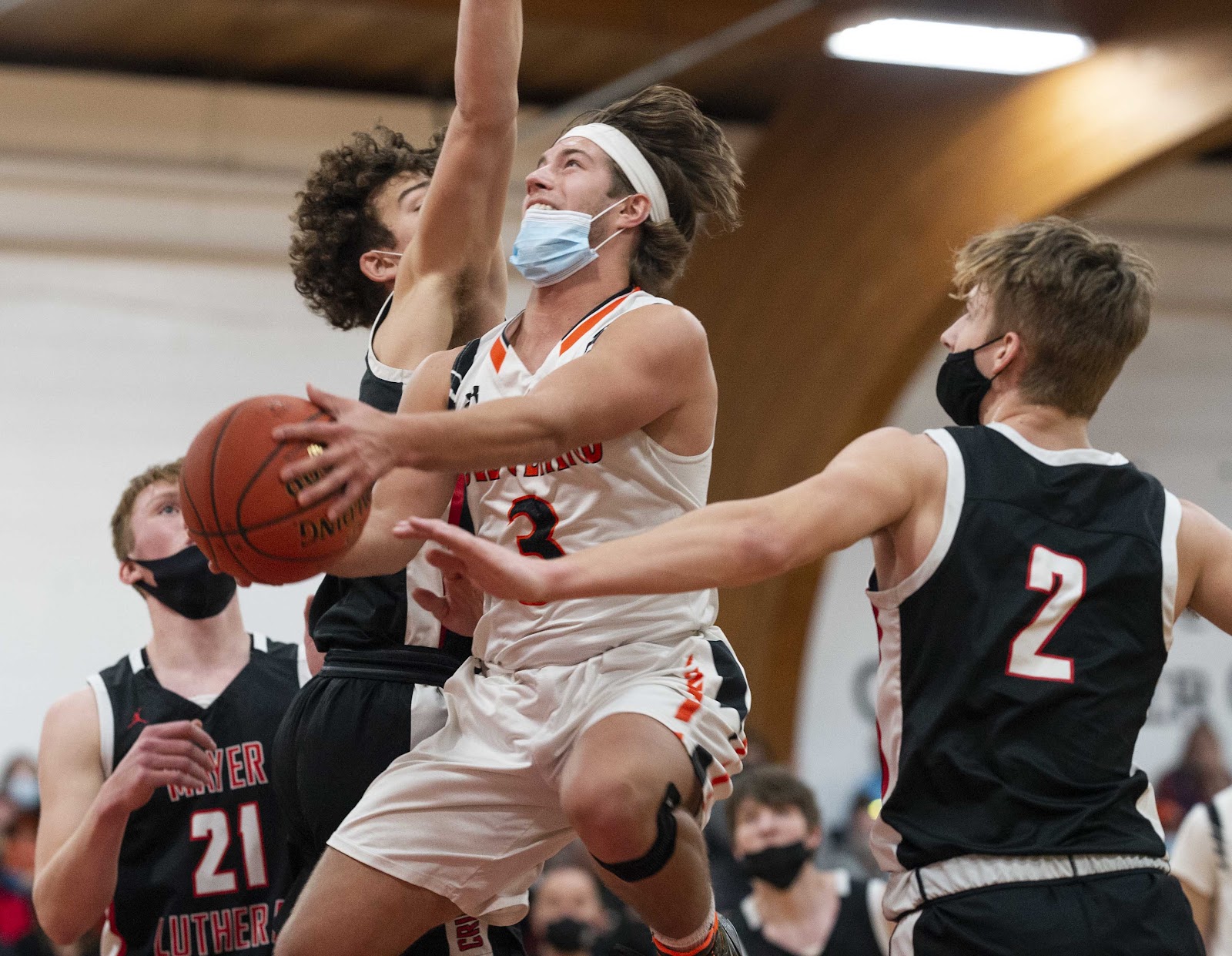 Alex McCabe bulls his way to the basket.

Isaac Mueller reaches out for a shot. 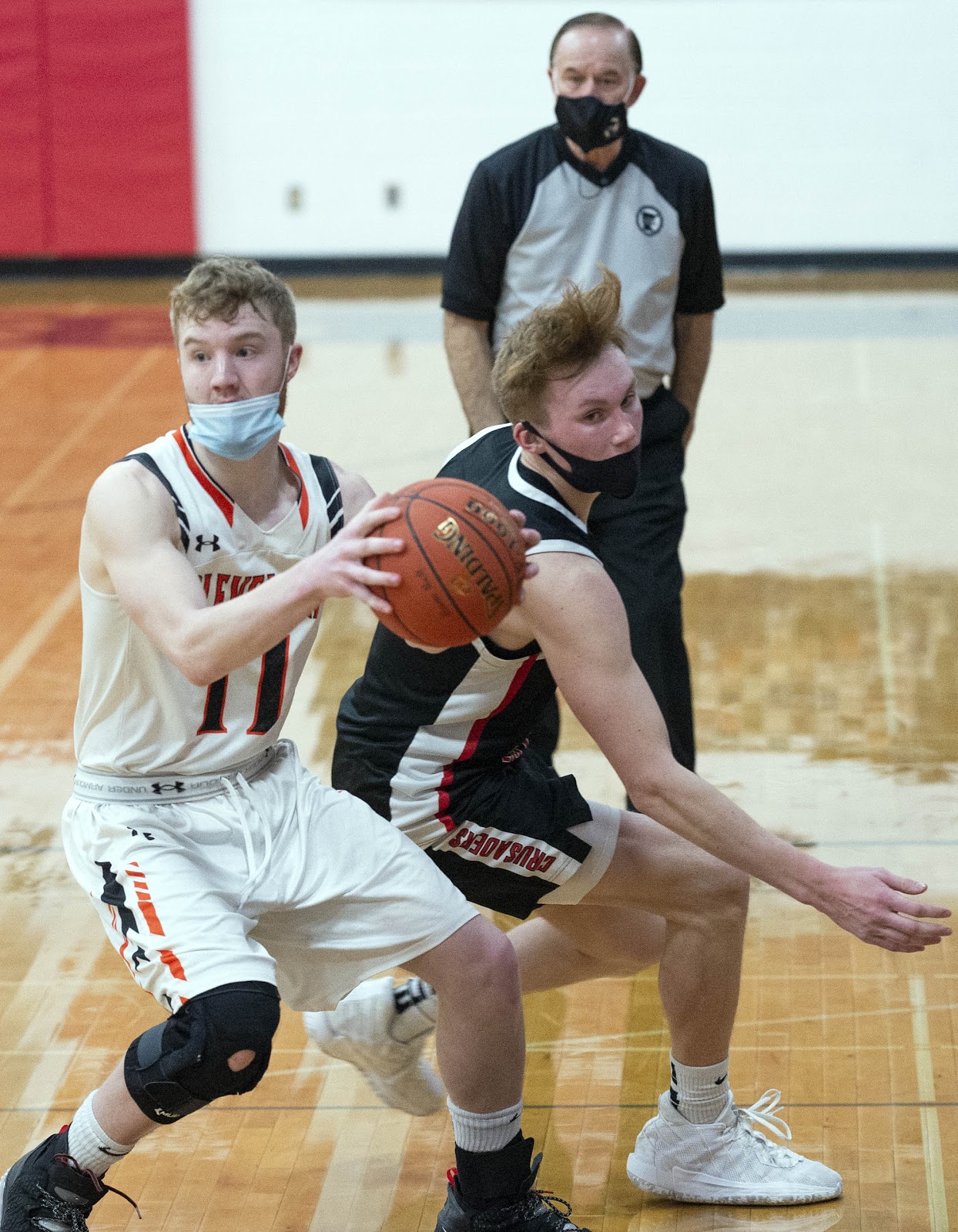 Eric Rohlfing swings the ball past a defender. 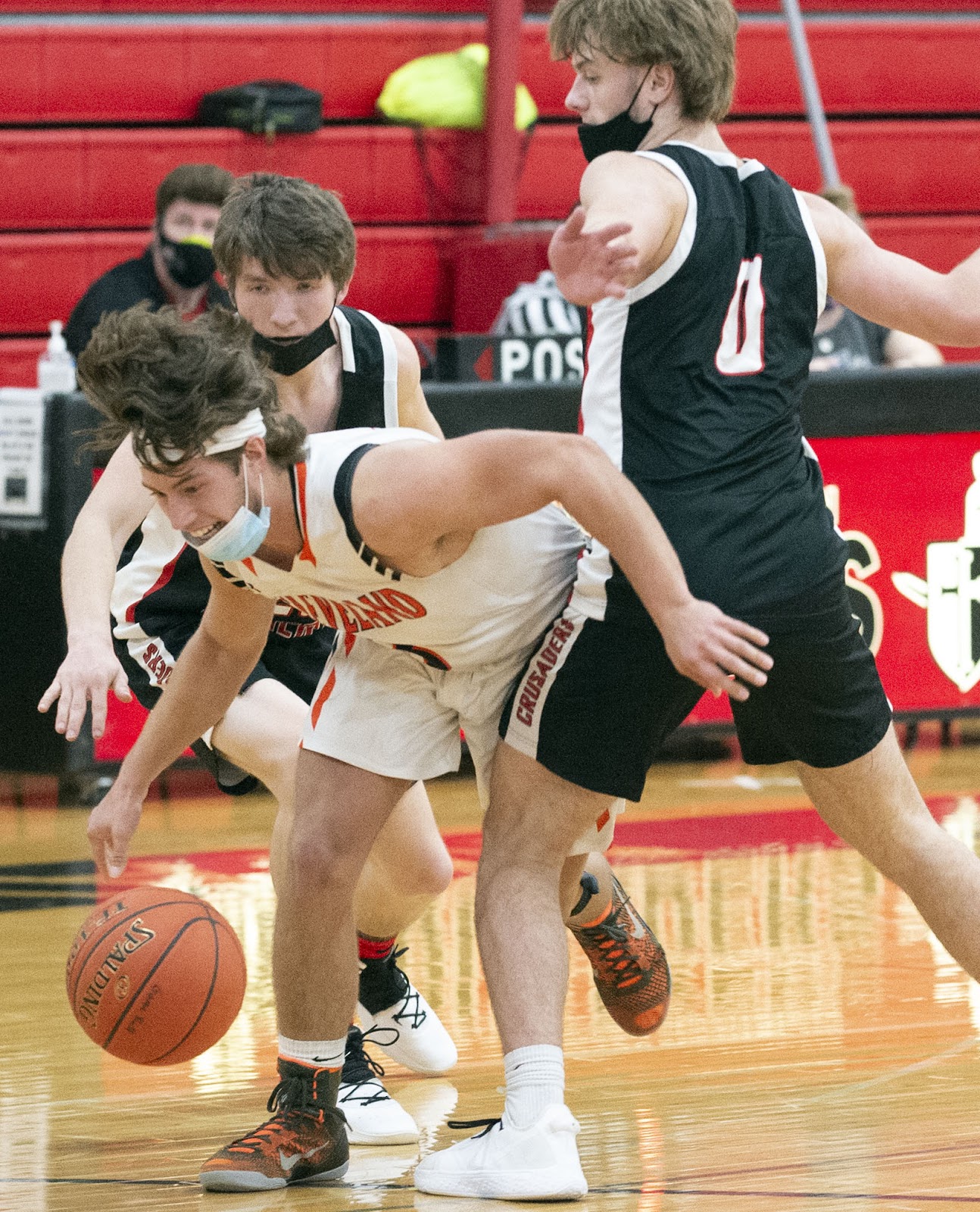 Alex McCabe got nudged on this play, but it didn’t matter as a second later he passed to Ben Holden for an assist that put the Clippers up 46-43.