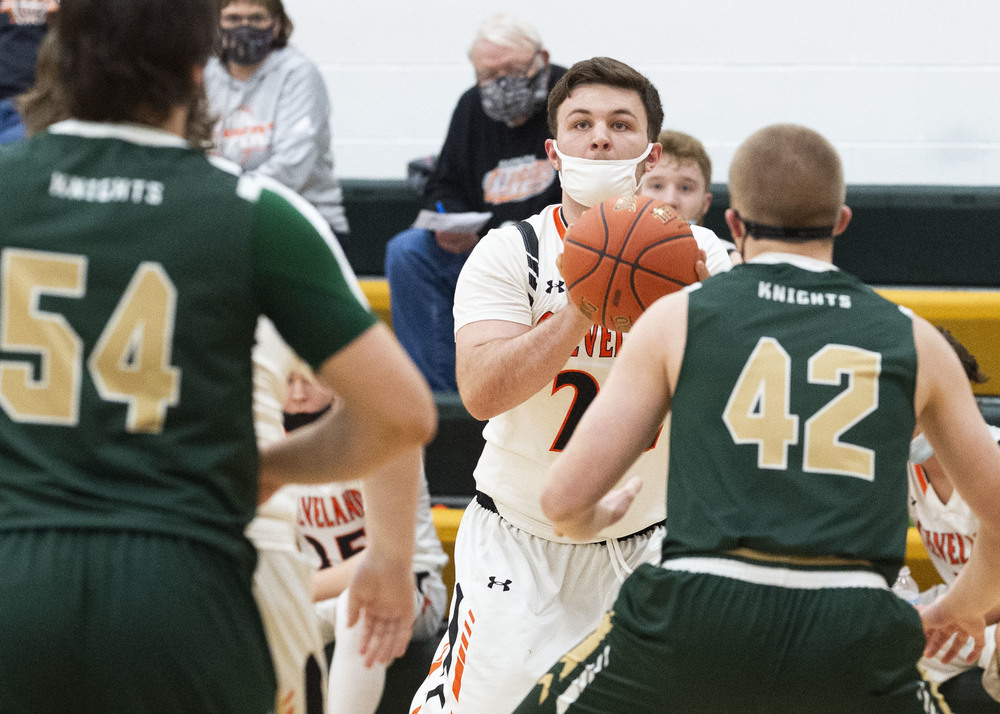 Spotting host Sleepy Eye St. Mary's 15 points early and never fully recovering, the Clipper boys' bid to make state for the first time in school history ended on Wednesday when they fell 81-48 in the subsection championship.

It was the end of the line for a senior first line of Ben Holden, Eric Rohlfing, Elijah Sullivan, Alex McCabe and Isaac Mueller as well as classmates Cameron Seely and Ellet Taylor.

While the fourth-seeded Clippers committed five turnovers, the second-ranked Knights canned five threes to go up 11-0 before Holden made pair of free throws five minutes in. After two more SESM threes, McCabe drove for a basket, and the Knights led 17-4.

“We got down 17-2,” said head coach Dan Fredrickson. “Our scouting report was number 25 (6-3 junior forward Cason Domeier). He’s the best player in their conference, and we let him step into four threes early. We didn’t guard him with any sense of urgency at all out of our zone. We just didn’t out to close; we didn’t play defense like we should have. Offensively it translated into too individual of basketball.”

Later, with a Sullivan and McCabe steal and coast-to-coast drives for a layups, a Mueller three and a pair of Mueller free throws, the Clippers went on a nine-point run to pull within six, 19-13.

Mueller navigated his way to the net for a basket, but the Knights added another three to go up 24-15. With 4:52 to the break, Sullivan went out briefly with an injured knee.

Holden rebounded and scored, McCabe weaved his way to the basket, and Sullivan scored after a Mueller steal, and Mueller made three of four free throws to pull the Clippers back within six, but the Knights tipped in an offensive rebound at the buzzer to take a 32-24 lead into the locker room.

“I felt the effort was there,” Fredrickson said. “I told them at halftime that there was no point where I feared these guys or anything they could do.”

Sullivan scored for the first basket of the second half. The Knights made a three, but Mueller quickly canceled it, and on a Holden-to-McCabe-to-Holden basket, the Clippers  narrowed their deficit to four, but the Knights dropped another three and then stole a Clipper in-bounds pass and scored.

“We had some success pushing it inside, but then we started going away from who we were: moving the basketball, a really good passing team, entering the ball inside and playing inside out, Isaac and Ben playing pick and rolls….we just got away from all of that and playing way too individually,” Fredrickson said.

With four Holden free throws, the Clippers were back within six, 41-35, but the Knights went on a 14-point scoring binge afterwards to put the game away.

“When the ball started rolling downhill it kept rolling and got bigger and bigger and just broke,” Fredrickson said. “I felt like a lot of it was self-inflicted. It started to add up along with them starting to play with some pace, playing with excitement and getting in transition. It was too much to overcome.”

Mueller fouled out at the 4:48 mark, and McCabe trailed him a minute or so later. One by one, the other three starters exited the game to finish their high school careers.

Peterson and Seely were among the players who came in off the bench. Seely made a free-throw, a two and a three (above) for six points.

Mueller led the effort with 17 points. Holden added a dozen points and pulled in 16 rebounds with the first of them his career 1000th. Sullivan scored nine points, and McCabe chipped in six points. The Knights scored 30 points from behind the arc. Domeier ended the night with 31 points.

SESM went on to beat St. Clair in the section championship in Arlington on Friday. St. Clair had topped Waterville in double overtime to win the south subsection.

The Clippers end the season with a 13-3 record. 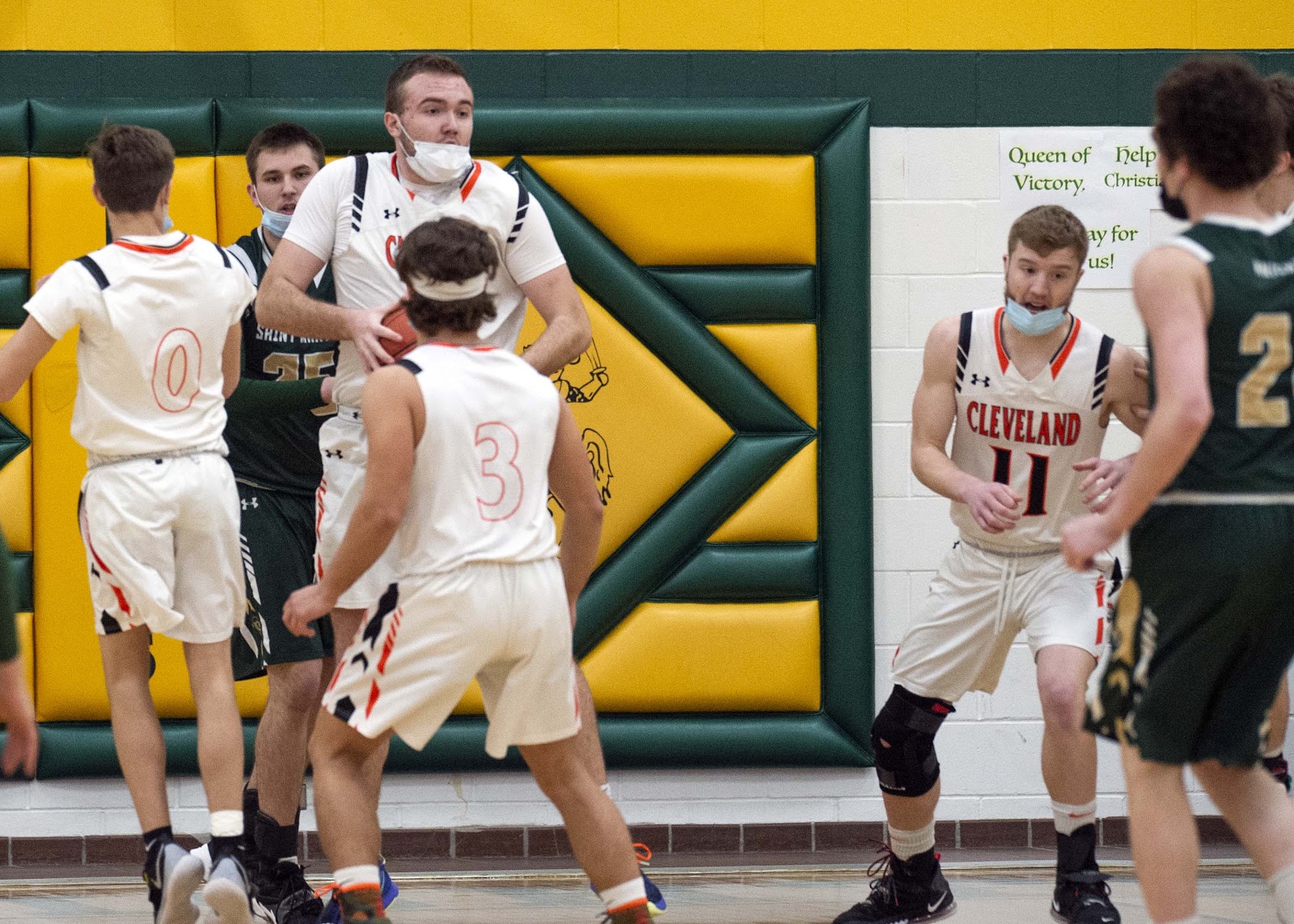 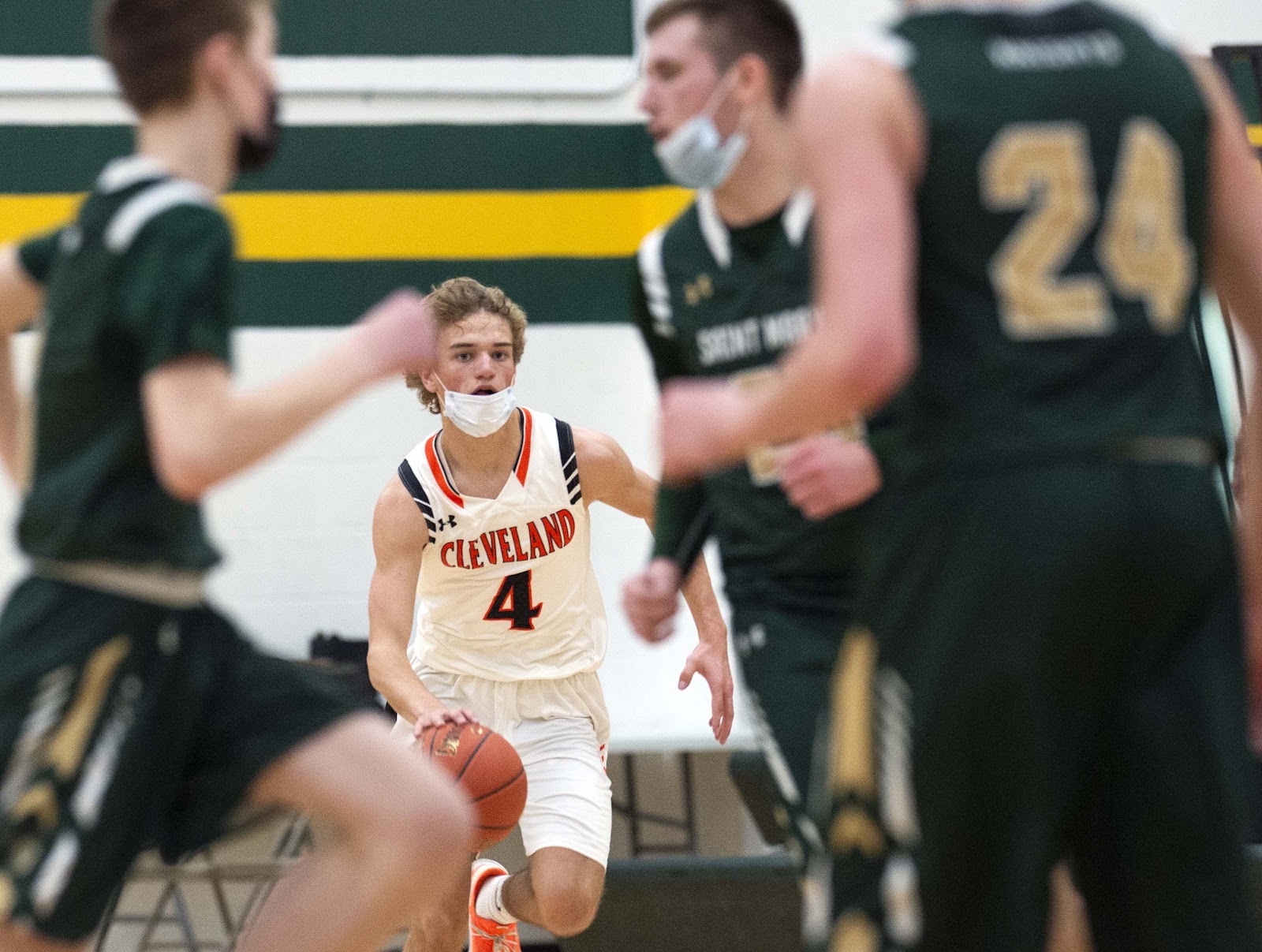 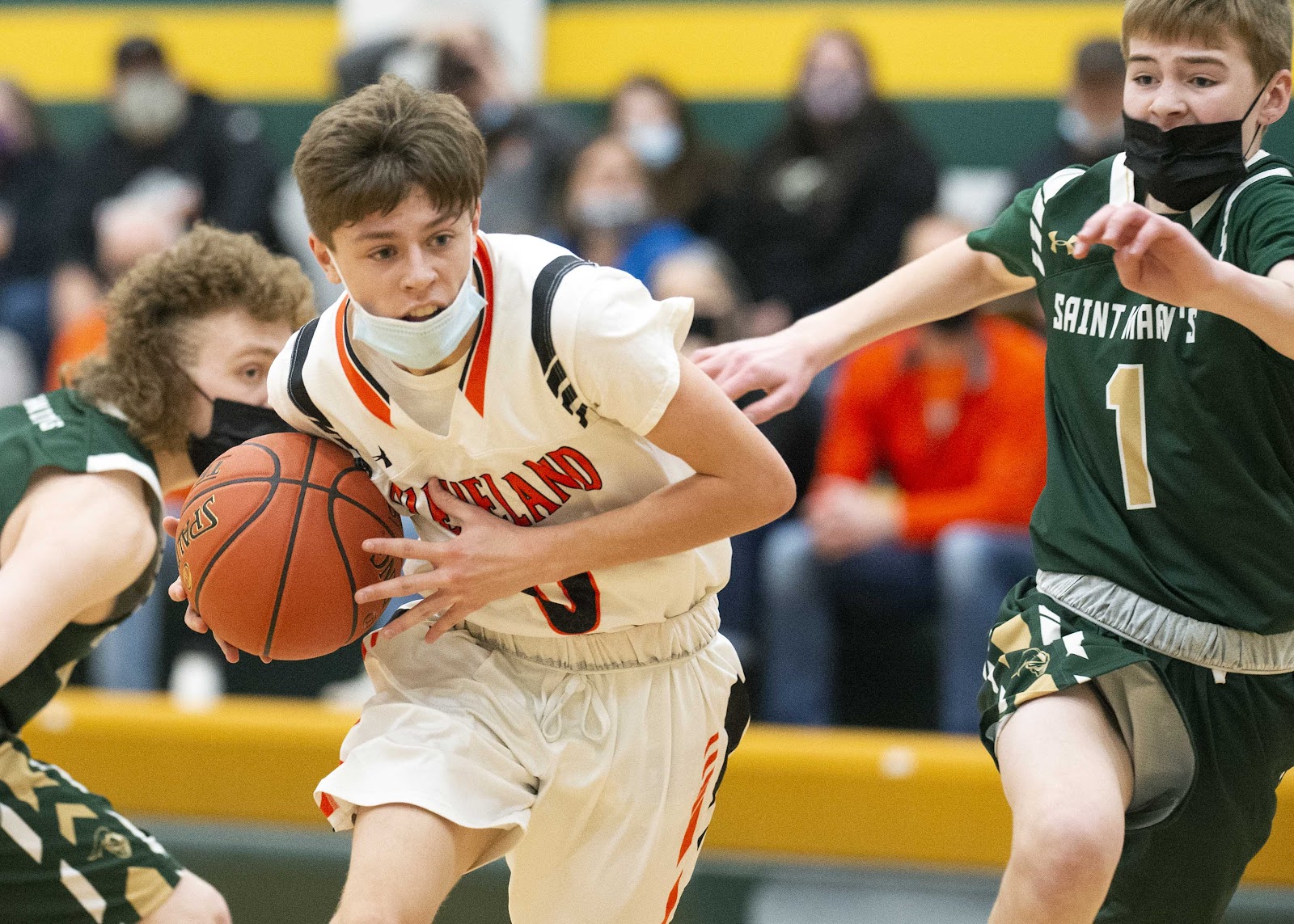 Playing with an injured knee he suffered early in the game, Elijah Sullivan bursts through a pair of SESM defenders. 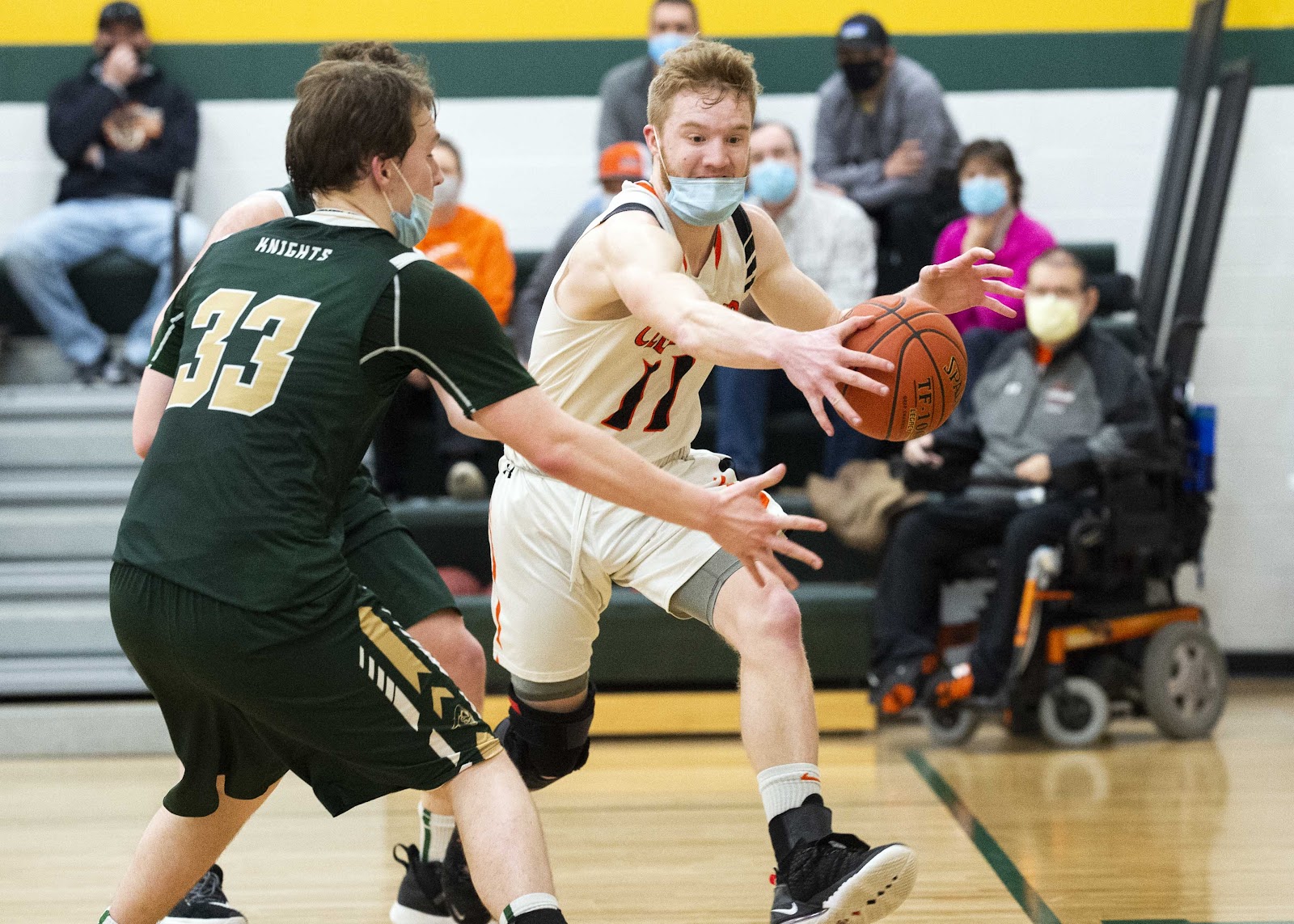 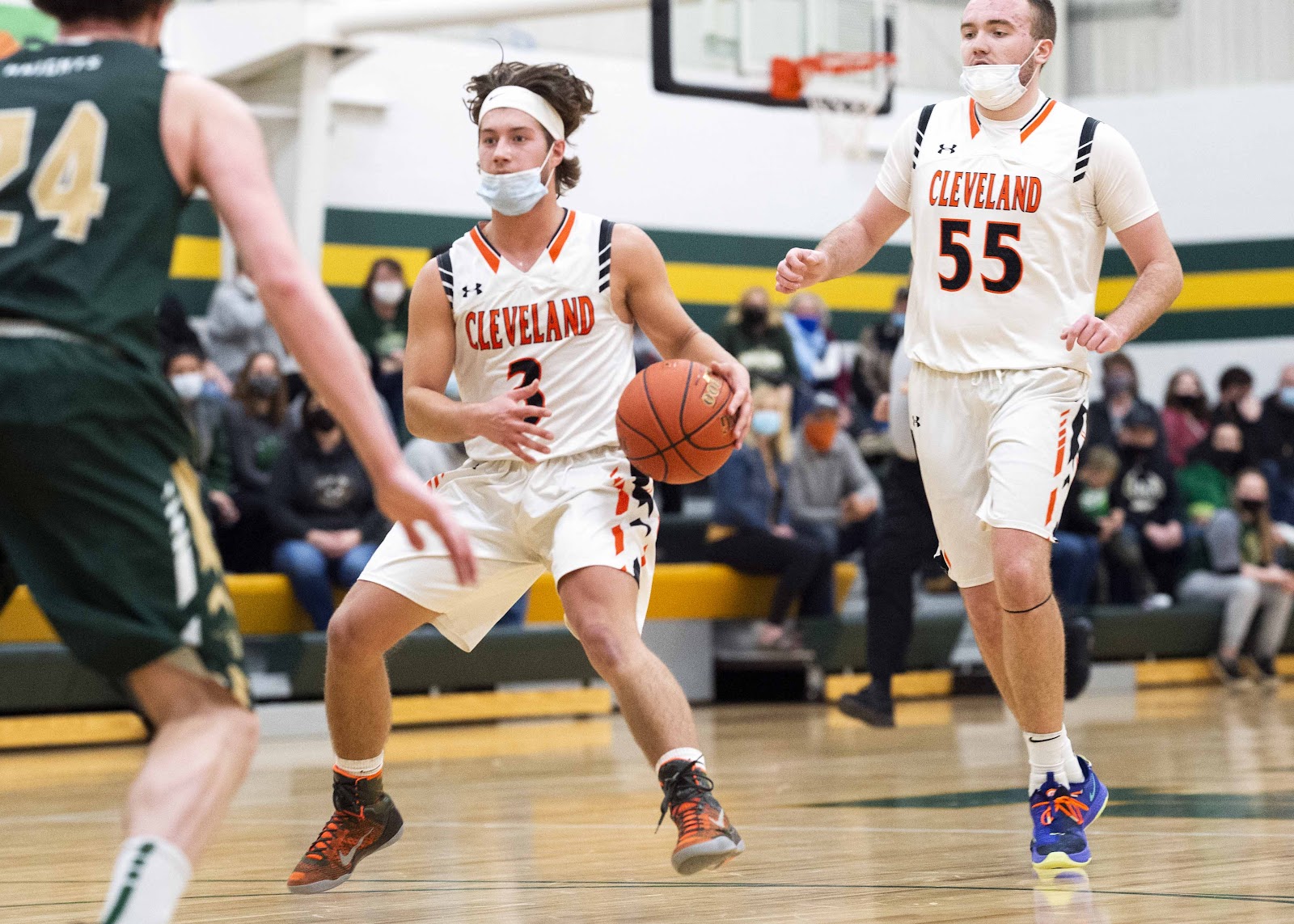 Alex McCabe looks for a way around an SESM defender. 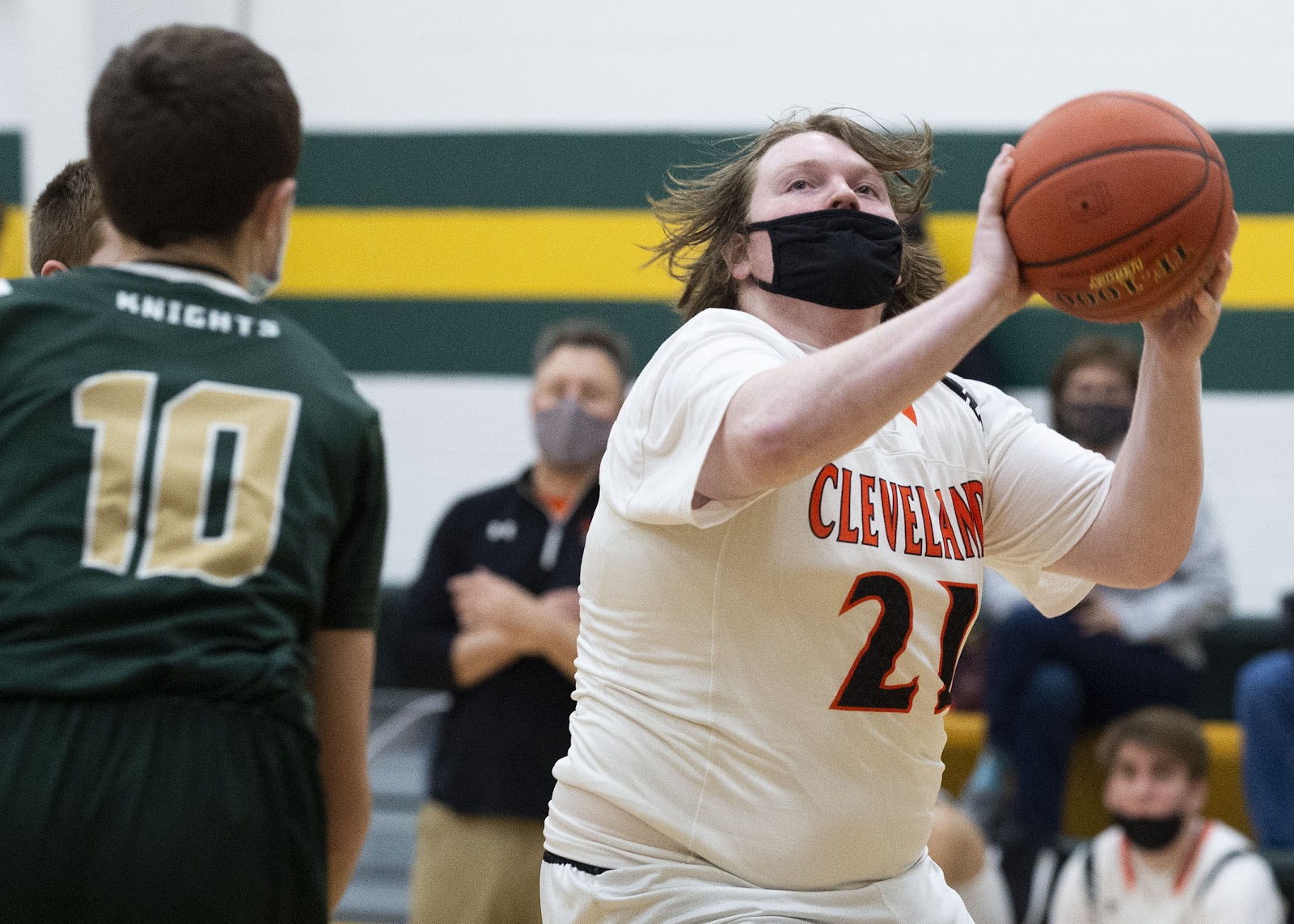 Ellet Taylor puts up a shot. 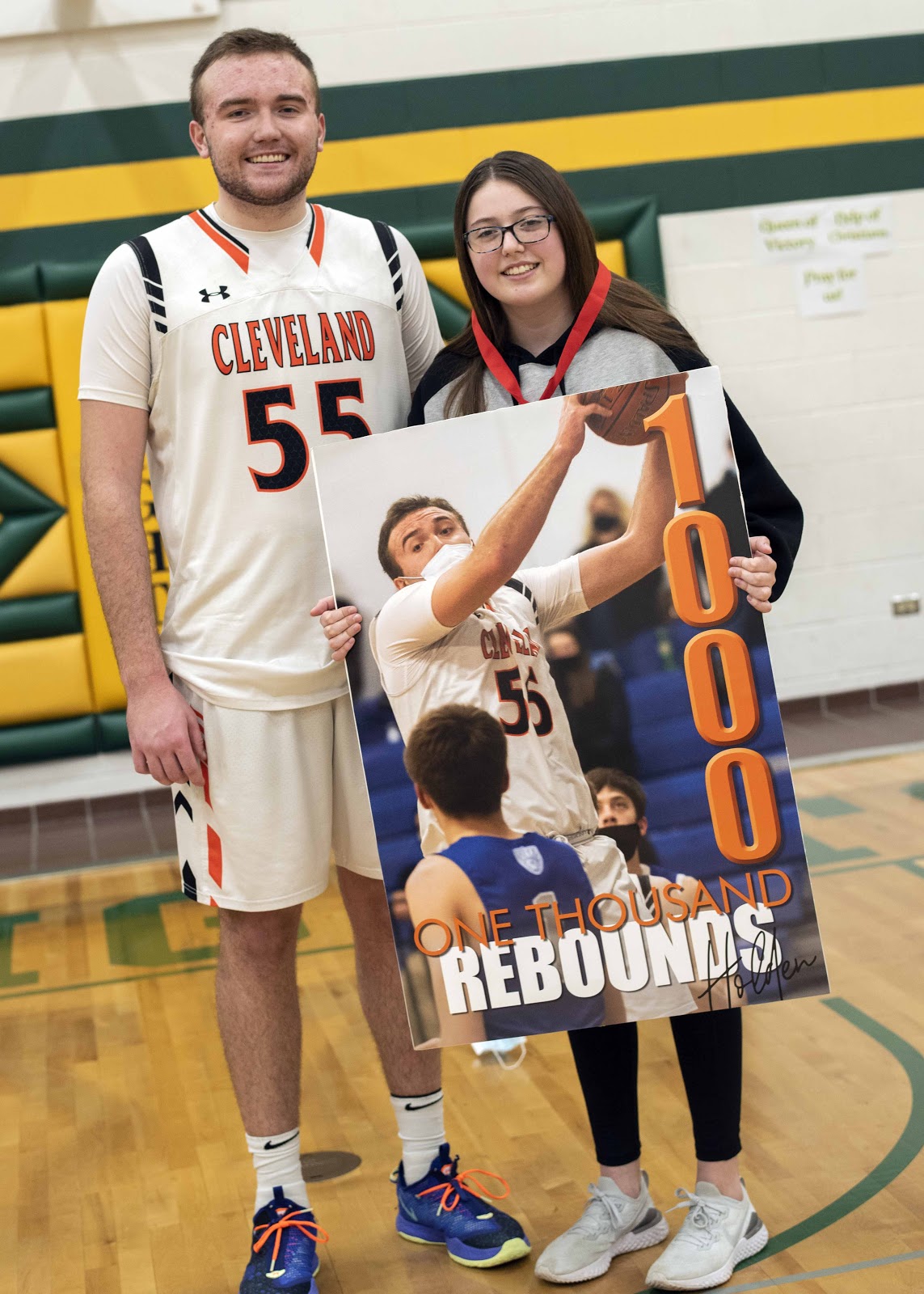 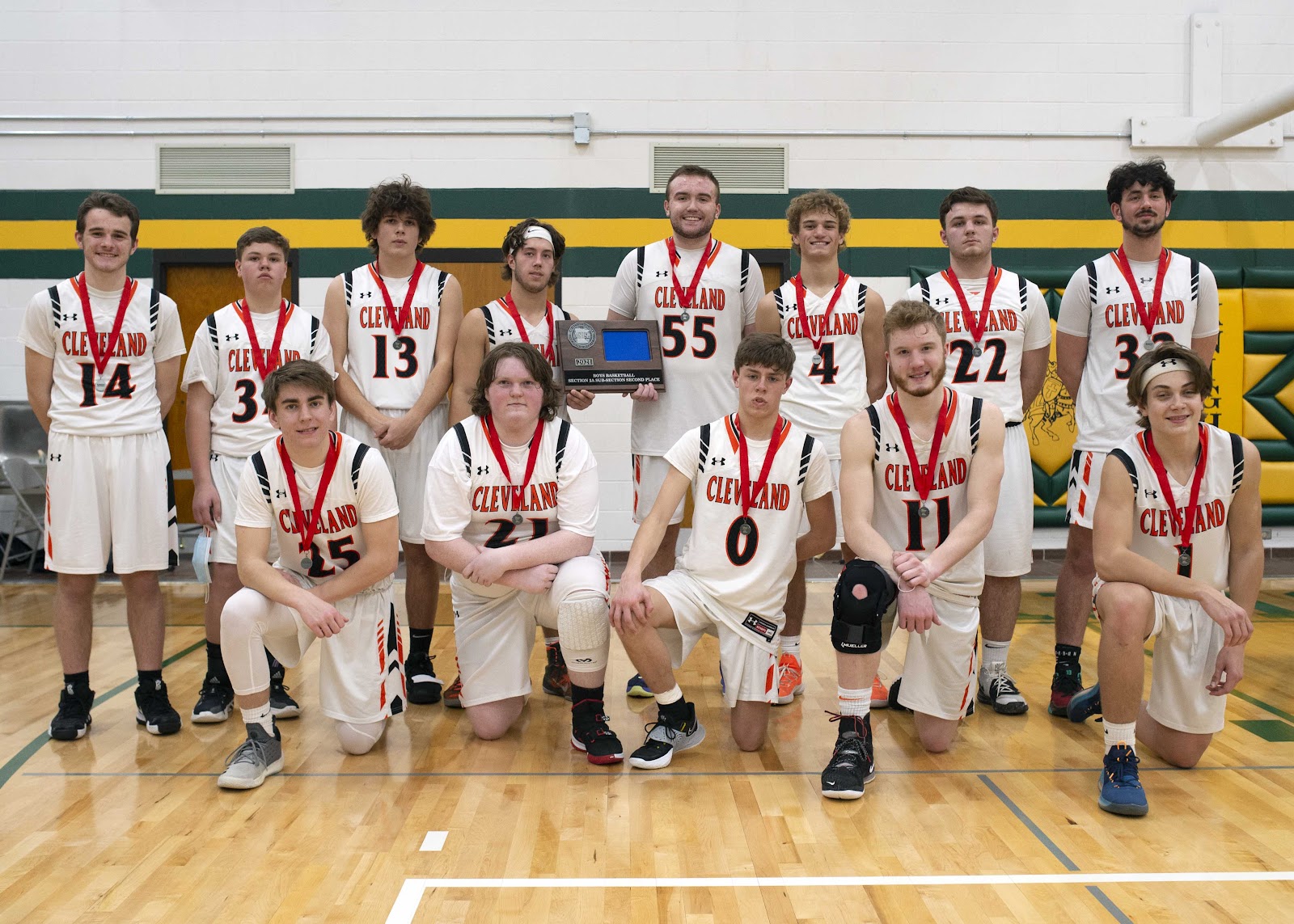