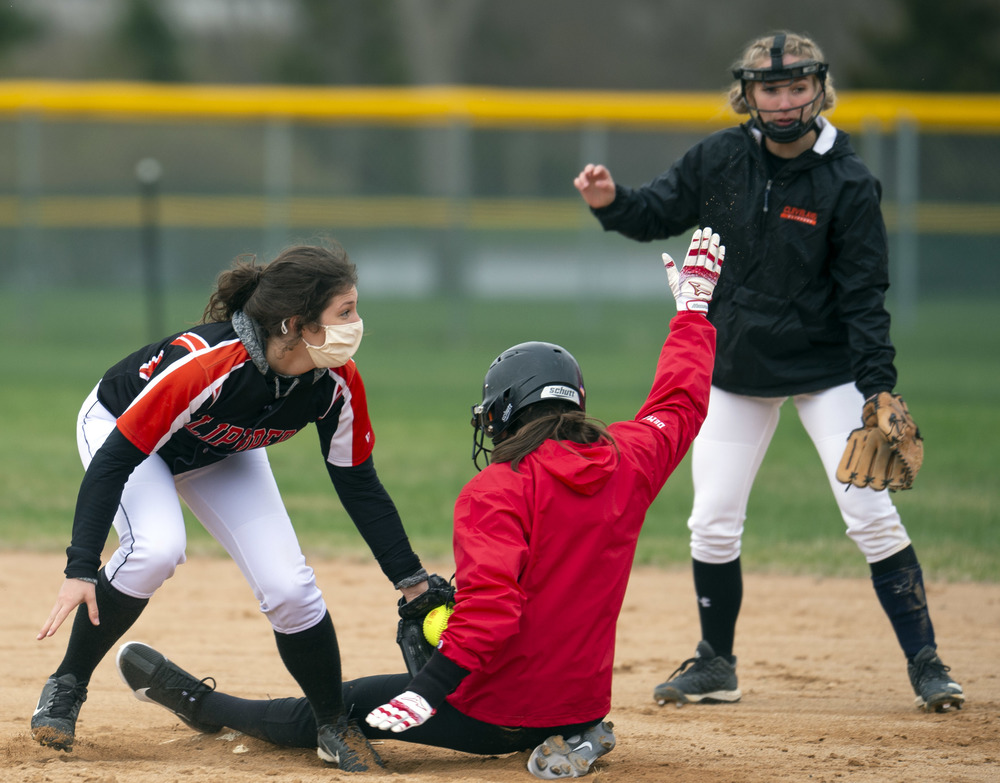 Clippers girls run out of steam at Faribault

Above, shortstop Halle McCabe tags a runner at second Backing her is Taylin Gosch. The runner was safe.

After a Clipper pitching change, Faribault Bethlehem Academy broke a 3-3 tie in the bottom of the sixth and went on to beat the Clippers 7-3 on Tuesday.

The game was played at Bruce Smith Park in the Rice County Fairgrounds.

While the Clippers had the momentum, acting head coach Sandi Hollerich didn’t want to push stating pitcher Emily Kern so early in the season…and in the frigid mid-30-degree temperature.

“She was really sore from Saturday after pitching both games,” Hollerich said. “We wanted to have her ready for JWP on Thursday. We took a risk.”

The second inning started out well for the Clippers with center fielder Macey Ziebarth teaming up with Grayce Kortuem to nail a runner rounding first in the second, but the Cardinals scored an unearned run on a single, a sacrifice bunt and a throwing error. They went up 2-0 in the third on a two-out walk with a stolen base tacked on and followed by a double.

The Clippers had a chance for a run in the fourth when Colie McCabe reached first on an error, swiped second and advanced to third on a Kern ground out. With two outs and Kortuem up to bat, McCabe broke for home after an escaped pitch. The catcher recovered, and the play at the plate was close, but McCabe was called out.

Kortuem must not have liked missing her chance for an RBI. When she led off the next inning, she batted in herself with her first varsity homer. Later in the inning, Cassandra Connor hit a ground-rule double and scored on a Halle McCabe hit into left field to knot the game 2-2.

The Cardinals posted another unearned run in the bottom of the fifth. The first batter reached first on an infield hit. On a hit-and-run, the Clippers opted for force at second, but the throw sailed to the outfield, and the runners scored on the play.

The Clipper didn’t roll over. Brianna Connor walked, moved to second when Kern smashed the ball back to the pitcher and scored on a Kortuem double, and it was three runs apiece.

But on three hits, two walks and a pair of Clipper errors, the Cardinals broke out with four runs in the bottom of the sixth to seal the triumph.

The Clippers totaled five hits. Harley Connor’s single in the third was the only one not part of the scoring sequence.

The Clippers, still looking for their first win, will play on the artificial turf of Janesville on Thursday.