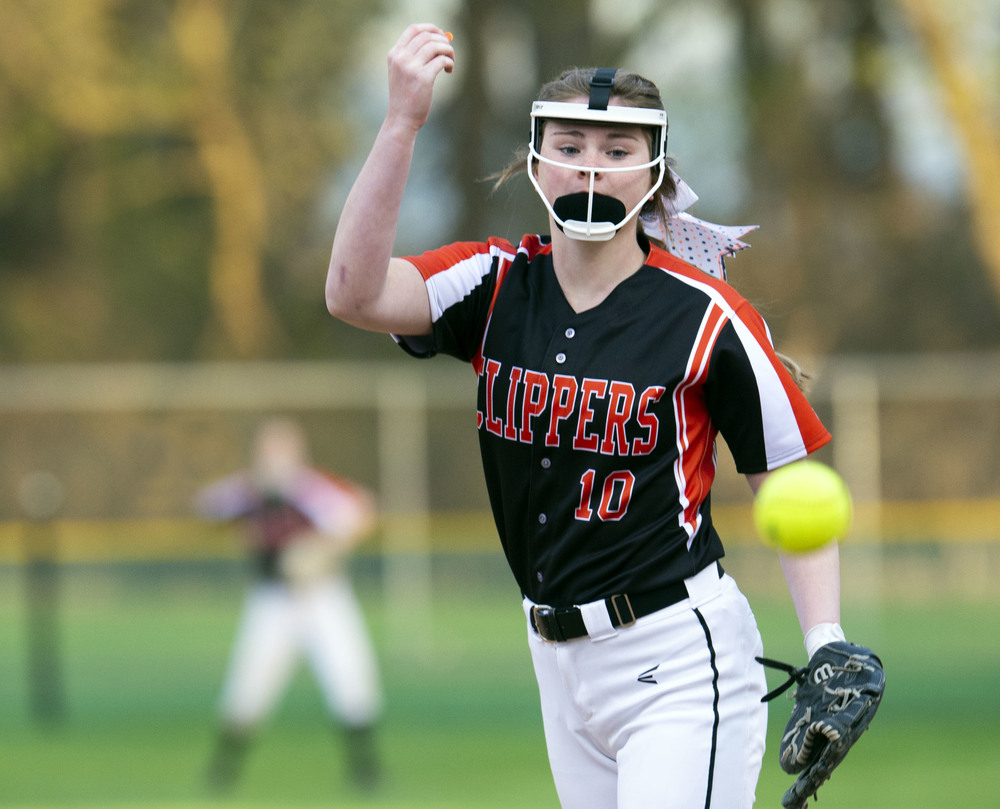 For five innings under the New Germany field’s Saturday night lights, pitcher Sierra Davis waited patiently in the wings as the Clipper varsity girls staged a comeback against Mayer Lutheran.

Like the Energizer Bunny, starting pitcher Emily Kern (above) kept going and going, even though she threw the entire seven innings in the Clippers’ 3-2 win over Goodhue just before. But a couple of errors didn’t help Kern’s cause in the fifth, the Crusaders scored six runs to go ahead 11-8, and Davis relieved Kern at the start of the sixth.

“I was very anxious waiting, and so I was super hyped to get out there,” said the junior, who pitched in two other games this season, both losses for the Clippers.

But she and the defense around her didn’t allow a run. Meanwhile, the Clippers put up four runs in the top of the seventh to earn Davis her first varsity victory and win the three-team, round-robin tournament.

On two hits and a walk followed by a pair of RBI ground outs, Mayer Lutheran scored three runs in the first.

The Clippers missed an opportunity in the second when Kern doubled but got caught trying to take third. Cassandra Connor followed with a double that would have easily been an RBI. With a single and an overthrow at first followed by a stolen base and a wild pitch, Mayer posted another run in the second for a 4-0 lead.

“We fell behind early,” Fredrickson said. “Maybe it wasn’t Emily’s best stuff after pitching such a fantastic first game, but she kept battling.”

But with a Brianna Connor double to start the third followed by a two-run homer by her cousin Harley Connor, the Clippers were on the board.

A Connor-Connor tandem struck again in the fourth—this time a triple from Ashley and a RBI single off the bat of her younger sister Casandra—to yank the Clippers within a run, 4-3.

After a single followed by a double, Mayer Lutheran scored again in the bottom of the fourth for a 5-3 advantage.

But the Clippers rallied for five runs in the fifth. Harley Connor got on board on a third-strike passed ball. Running for her, Emma Sweere took second on a stray pitch and scored on a Colie McCabe single. Halle McCabe walked, Kern reached first on an error, and Colie McCabe scored on a rouge pitch.

After Ashley Connor walked, Cassandra Connor hit into a fielder’s choice that scored two runs. When the shortstop overthrew first base on a Grayce Kortuem grounder, the Clippers went up 8-5.

Mayer Lutheran maximized two walks, two hits and two errors in the bottom of the fifth to pull back ahead 11-8.

After three quick Clipper ground outs in the top of the sixth, Fredrickson gave Davis the nod. She struck out the first batter she faced and got the second to ground out too.

“I thought I brought her in an inning too late,” Fredrickson said. “The ball comes off her hand really well. She throws hard, and when it is on, she has an awesome change up.”

After a Clipper error and a walk, two runners were on base, but Brianna Connor fielded a grounder and stepped on third base to halt the uprising.

The Clippers needed four runs to go ahead and got them. Halle McCabe walked to start the inning. Ashley Connor singled, and Cassandra Connor singled for two RBIs. The final two runs scored when the ball popped out of the first baseman’s glove after a Harley Connor grounder.

Davis was back in the circle in the seventh, this time facing the top of the order. She fanned the leadoff batter looking, but the Clippers missed an opportunity for an easy second out when three players watched a lazy popup drop in foul territory just a few feet down the third base line.

Davis knew she should have taken charge, but she didn’t let the slip-up rattle her.

“It was totally my mistake but I just blew it off. I got back in there and just threw strikes.”

A pitch or two later, the number-two batter reached first on a throw over Harley Connor’s head at first. The next batter doubled, and it looked like the runner would score, but centerfielder Macey Ziebarth hooked up with Laci Hollerich—who had entered the game at catcher—for a tag out at the plate.

Fredrickson had reminded Ziebarth to hit the cut a couple times earlier in the game, but the third time was the charm, and he was glad she threw to the plate.

“In normal situations there, you hit the cut: let the tying run score but don’t let the winning run go to second” Fredrickson said. “But Macey is going to do what Macey does. She sent it home, and it was an amazing throw and a great tag by Laci.”

The game ended when Brianna Connor caught a line ball to third.

Kern struck out four, gave up eight hits and walked four. Davis struck out two, walked one and allowed one hit. The Clippers had four errors.

Goodhue, which beat Mayer Lutheran 10-4 in the first game of the tournament, took Kern’s first pitch of the day over the fence for a 1-0 lead, but Kern got revenge with a homer of her own in the fourth.

The Wildcats posted another run in the sixth on a walk, a stolen base, a passed ball and a sacrifice fly, but the Clippers tied the game 2-2 in the bottom of the same inning when Nicole McCabe walked, stole second, advanced to third on a fly out and scored on another passed ball.

Later in the sixth, Kern walked. Running for her, Sophie Shouler made her way to third on a stolen base and a stray pitch, but with Kaylee Karels batting, Shouler got gunned out trying to steal home.

After the Clippers held Goodhue off in the top of the seventh, Karels, back at the plate, dropped a single down the right field line. Running for her, Shouler stole second, moved to third on a passed ball and scored on a Harley Connor single for the Clipper win.

Coaching in a strategy-filled seven innings, Fredrickson made a number of substations and shifts, but for the most part, they went his way.

“Goodhue is such a good team,” he said. “It is Randolph’s competition to go to the State Tournament.

The Clippers’ game at New Ulm on Monday was postponed. They travel to Welcome to take on Martin County West today (Tuesday). 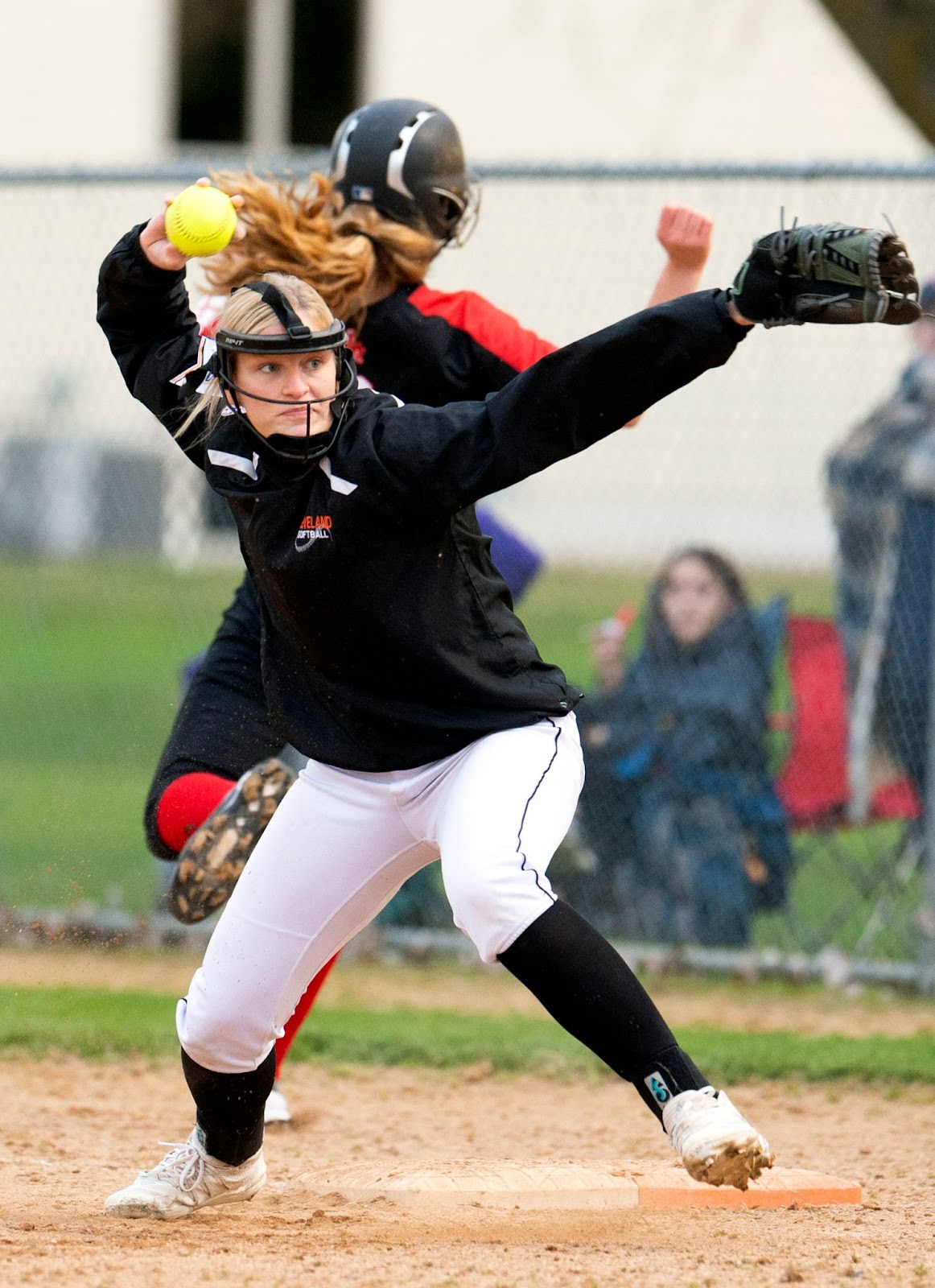 Grayce Kortuem winds up for a throw to home after stepping on first base for a Mayer Lutheran out. Later in the game, Kortuem was bothered by a cramp, and Harley Connor moved from catcher to first while Laci Hollerich took over behind the plate. 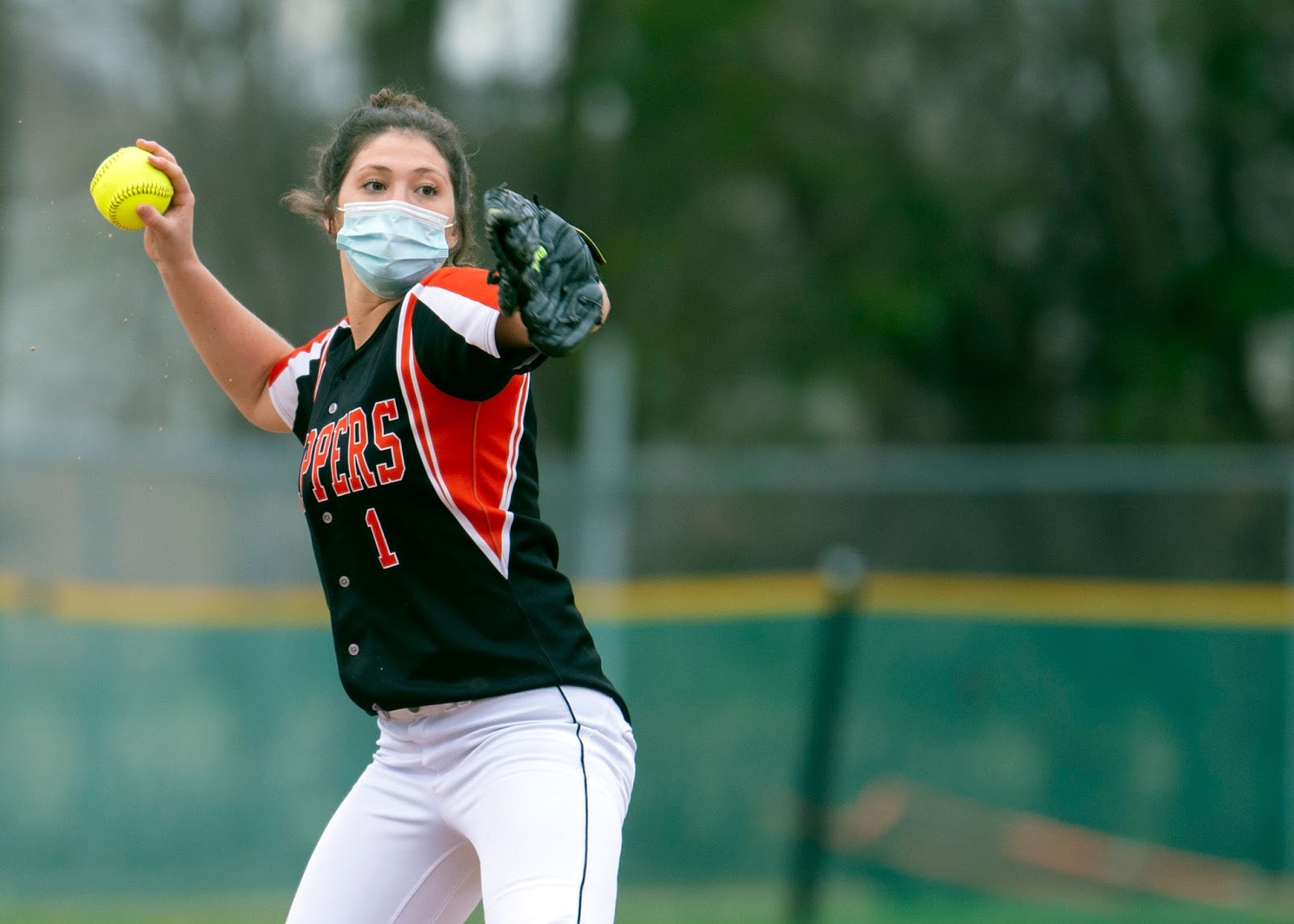 Shortstop Halle McCabe readies for a throw to first against Goodhue. 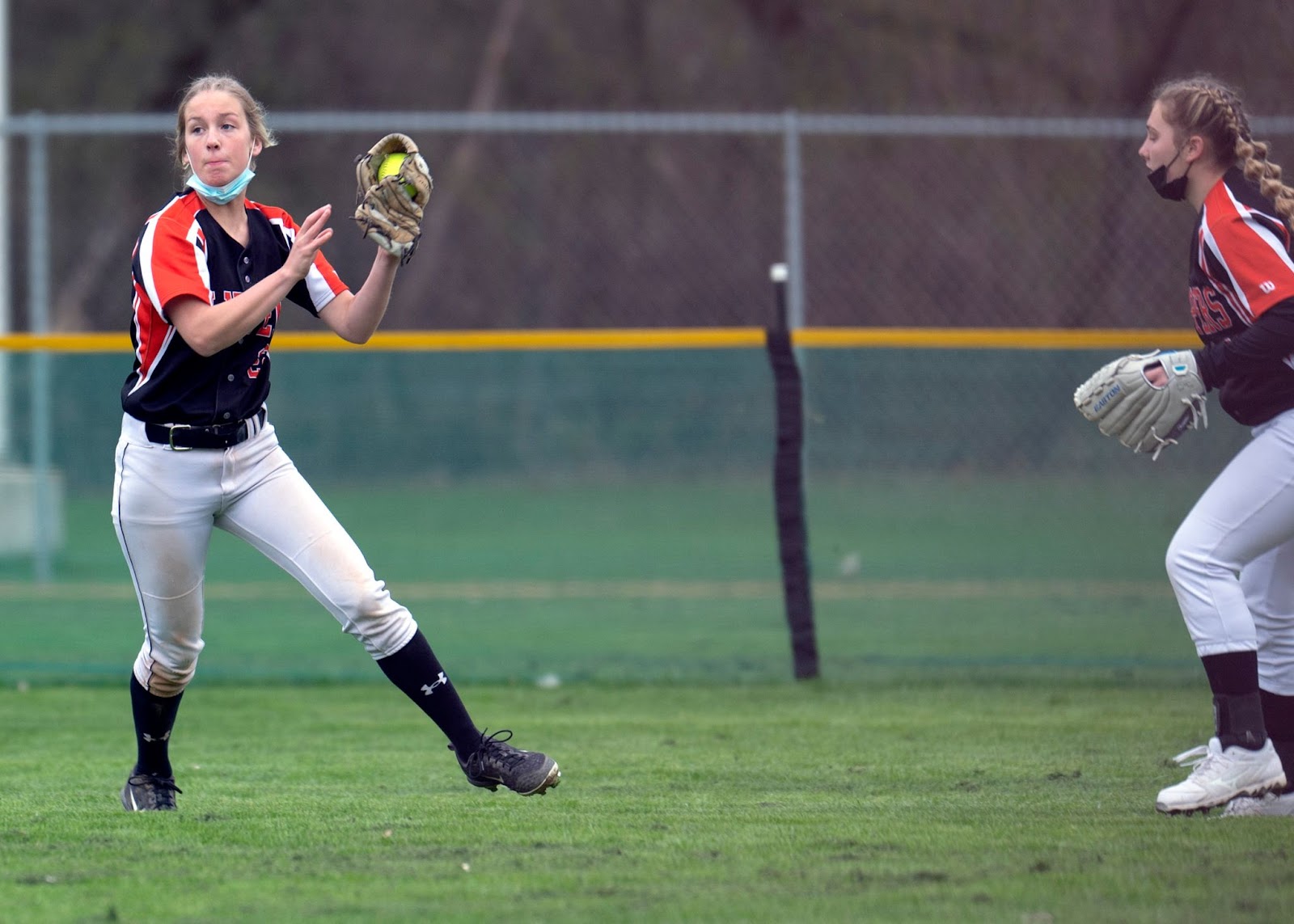 Macey Ziebarth grabs a fly ball in centerfield against Goodhue. Beside her is Kaylee Karels. 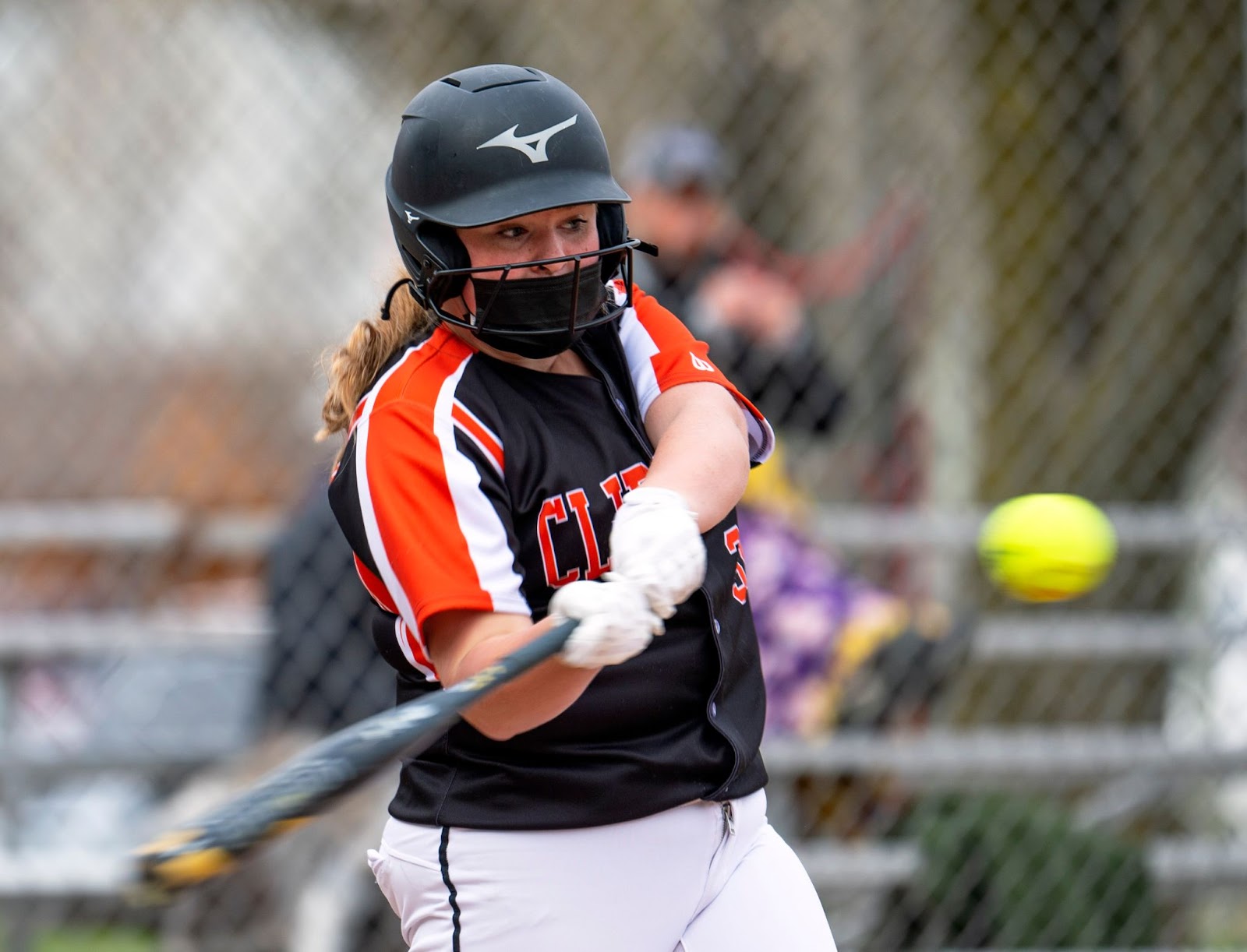 Brianna Connor swings against Goodhue. With a crash on defense and a hard slide, she suffered  a few hurts throughout the game.