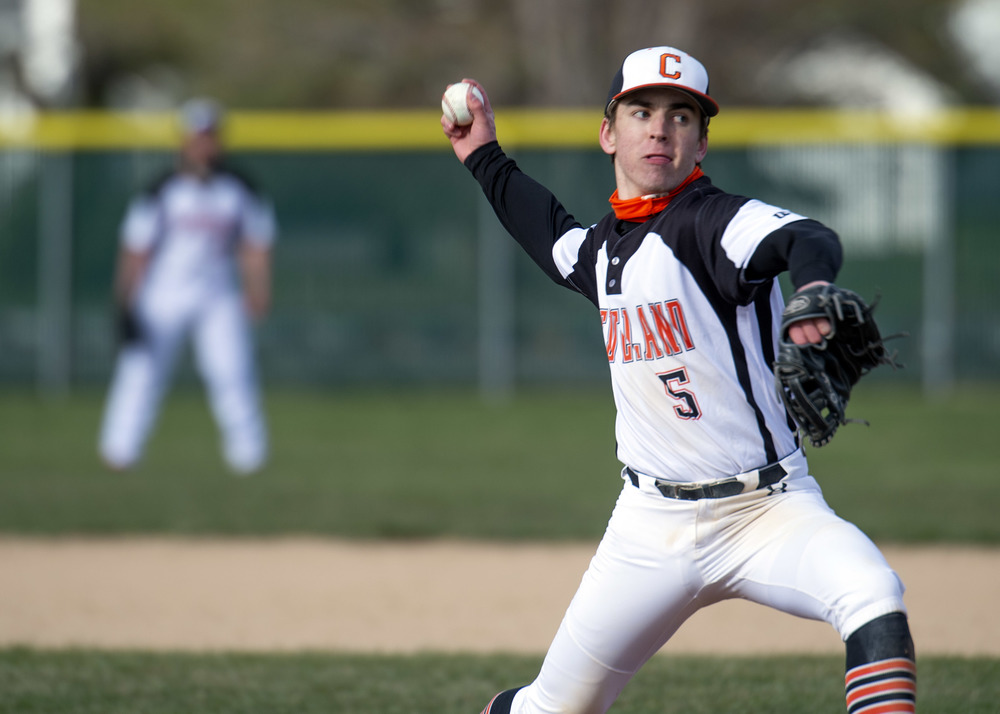 Clipper nine 2-3 for the week

With the varsity Clippers having three games last week, head baseball coach Mike Krenik was hoping they would have vacated the St. Clair field early on Tuesday and saved some pitching arms for later.

They didn’t, but the Clippers still controlled the Cyclones 11-4.

“We missed a few signs,” Krenik said. “We should have 10-runned them in five.”

It was another easy game on Thursday as the Clippers beat visiting Martin Luther/Truman/Granada-Huntley-East Chain 10-5 before falling to host New Ulm Cathedral 6-2 on Friday.

The Clippers outhit the Cyclones 13-6. Starting on the hill, Carter Dylla (above) lasted five innings. He fanned eight and allowed one walk and five hits for two runs.

“My command all day was a favor to me,” said the junior, who plays shortstop when not on the hill. “I was throwing the fast ball, and the curve was breaking, so that’s all I needed to do.”

There was a strong, cold wind gusting in from center field. It made the seven innings uncomfortable for fans and players alike, but Dylla thought it worked in his favor.

“I’d say the wind helped me because it pushed my ball movement a little bit. It’s never fun to play in, but it’s Minnesota.”

Alex McCabe threw the last two innings. He gave up one hit and two walks for two runs.

The Clippers went up 4-0 in the second. Lucas Walechka and Jackson Meyer each got on board on an error and advanced when Colin Krenik settled for a walk. Tanyon Hoheisel’s single scored Walechka, and Meyer crossed the plate when top-of-the-order Dylla walked. Walechka scored on an Elijah Sullivan single, and Meyer scored on a fielder’s choice. Dylla crossed the plate on a passed ball.

The Clippers posted another run in the third when Meyer and Krenik hit back-to-back singles. They advanced on a fielder’s choice, and Meyer scored on an errant pitch to put his team up 5-0.

St. Clair managed a run in each of the fourth and the fifth innings, but Hoheisel, Dylla, Kaleb Timlin, Jake Anderley, Walechka and Krenik all had hits in the sixth for four more Clipper runs.

Dylla singled to start out the seventh before he was forced out on a fielder’s choice, but Timlin got hit by a pitch, and he and Sullivan moved up on a McCabe walk. Sullivan scored on a passed ball while Timlin moved to third on an Anderley single and scored on a Walechka ground out for the final two Clipper runs.

The Clippers gave up two runs in the seventh after a pair of walks that started the inning, but the game ended when Anderley captured a couple of flies to center field.

Anderley went 3-5 at the plate. Dylla was 2-3 with two walks. Krenik was 2-3 with one walk. Hoheisel was 2-4.  Timlin, Sullivan, Meyer and Walechka all had one hit.

With a walk by Dylla and three-straight hits, which came off the bats of Sullivan, Timlin and McCabe, the Clippers went up 3-0 in the bottom of the first against Martin Luther/Truman/Granada-Huntley-East Chain.

Gabe Sullivan led off the bottom of the second with a base hit. Dylla followed up with a hit too, but later got thrown out on a Timlin fielder’s choice. Gabe Sullivan scored on an error. Elijah Sullivan walked and scored on a McCabe single. Timlin scored on a Walechka single. Meyer singled, and Krenik walked. Walechka got tossed out at third, but the Clippers added four more runs to go up 7-0.

“They were young and inexperienced,” Krenik said. “But I think everybody is in the same boat.”

The Clippers posted two more runs in the fifth to pull ahead 9-4. Walechka walked, advanced on Alex Garcia and Gabriel Sullivan singles. Walechka and Garcia scored on a Dylla hit, but Sullivan got tossed out on the play to end the inning. Their final run came in the sixth when Elijah Sullivan walked, stole second and third and scored on a grounder.

Staffing the mound for five and two-thirds innings, Walechka earned the win. He gave up nine hits and two walks and struck out seven.

“He pitched a good game but wasn’t quite as efficient today,” Krenik said. “He was struggling a little bit in the strike zone. The first three innings he was at 13 to 14 pitches an inning, which is what we want to see, but then he got a little tired and wasn’t finding the zone as he normally does, but we had to pull him because of pitch count.”

Taking over for the save, McCabe allowed two hits and one walk and struck out one. The Clippers had five errors.

The Clippers dispersed 11 hits. Dylla, McCabe and Gabe Sullivan each had two hits. Timlin, Elijah Sullivan, Meyer, Garcia and Walechka each had one hit.

Cleveland and NUC each had seven hits, but the Greyhounds took advantage of what else the Clipper gave them for the win.

Elijah Sullivan walked, moved to second on a passed ball and scored on a McCabe double while McCabe crossed the plate on a Walechka double to put the Clippers in front 2-0 in the first, but that was the end of the their scoring.

The Greyhounds answered with a triple and a single followed by a walk and an error to take a 3-2 lead after one. They added insurance runs in the second, third and fifth inning.

McCabe hit a single and a double in the effort. Dylla, Garcia, Walechka, Krenik and Gabe Sullivan each had one single.

McCabe threw the first four innings. He gave up six hits and four walks while striking out four. In relief, Krenik struck out two, allowed one hit and walked none. Each team errored once.

The Clippers host Madelia on Tuesday. 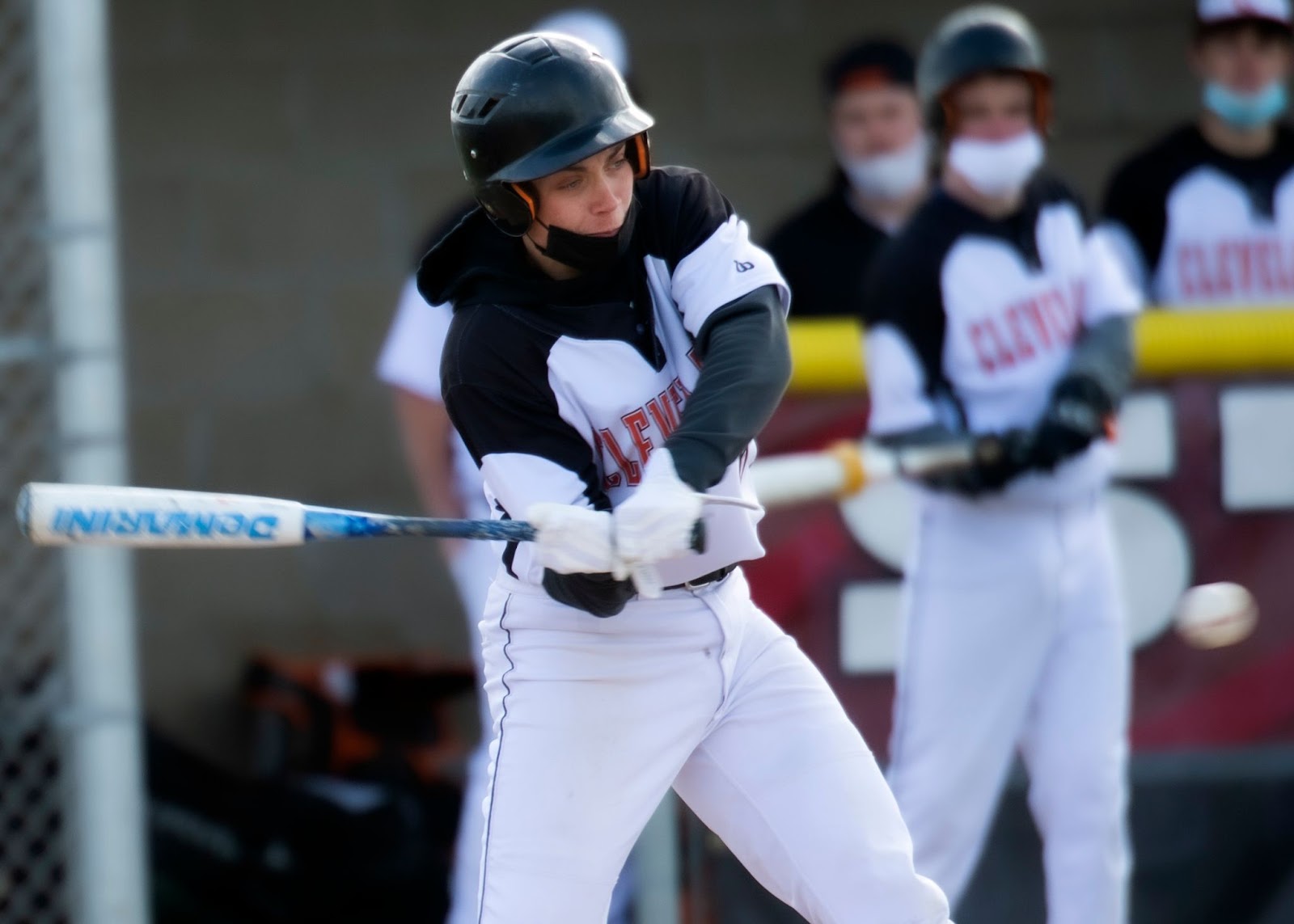 Jackson Meyer swings for what would be a hit against host St. Clair. 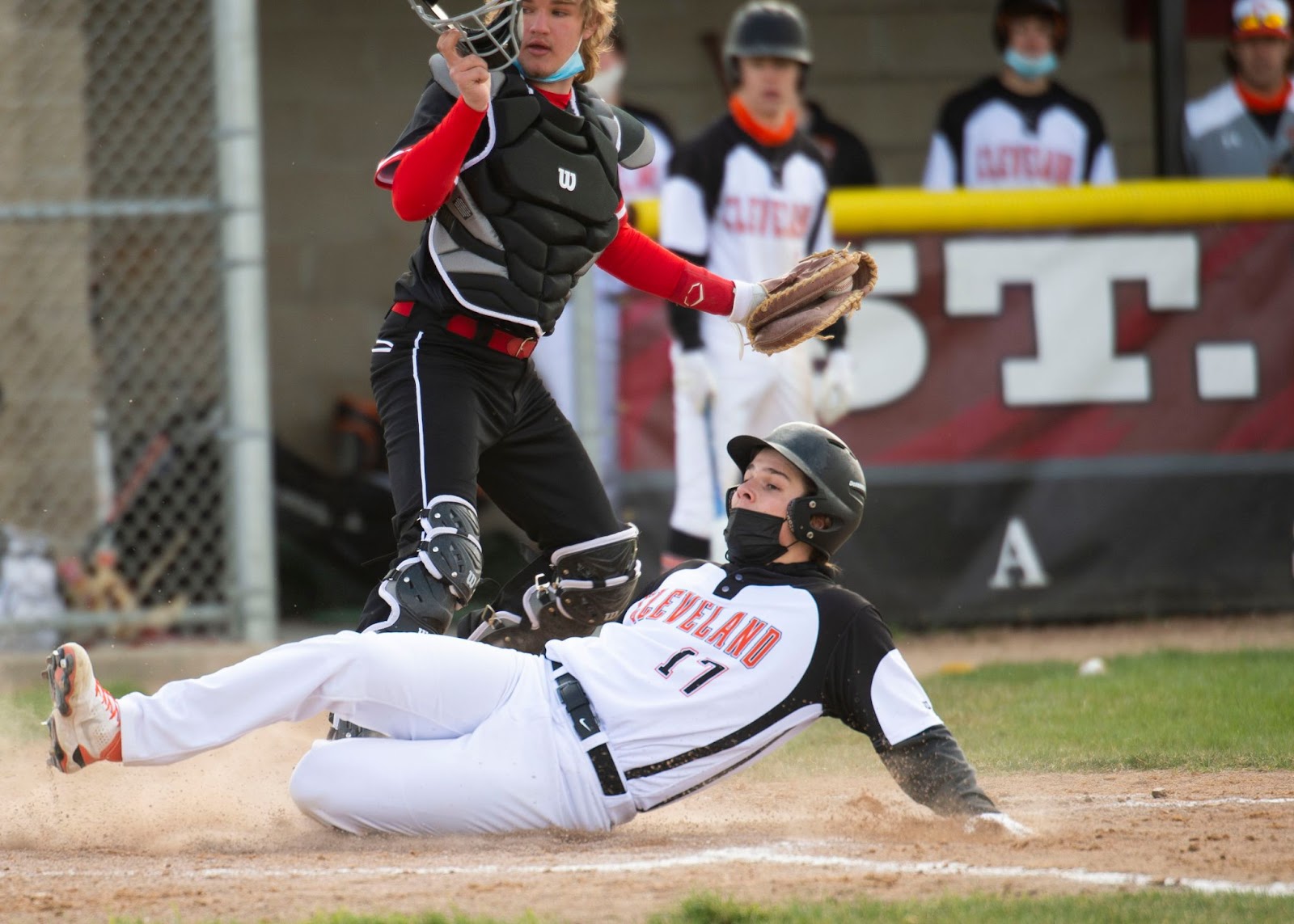 Lucas Walechka couldn’t quite beat the force out at home on this play at St. Clair. 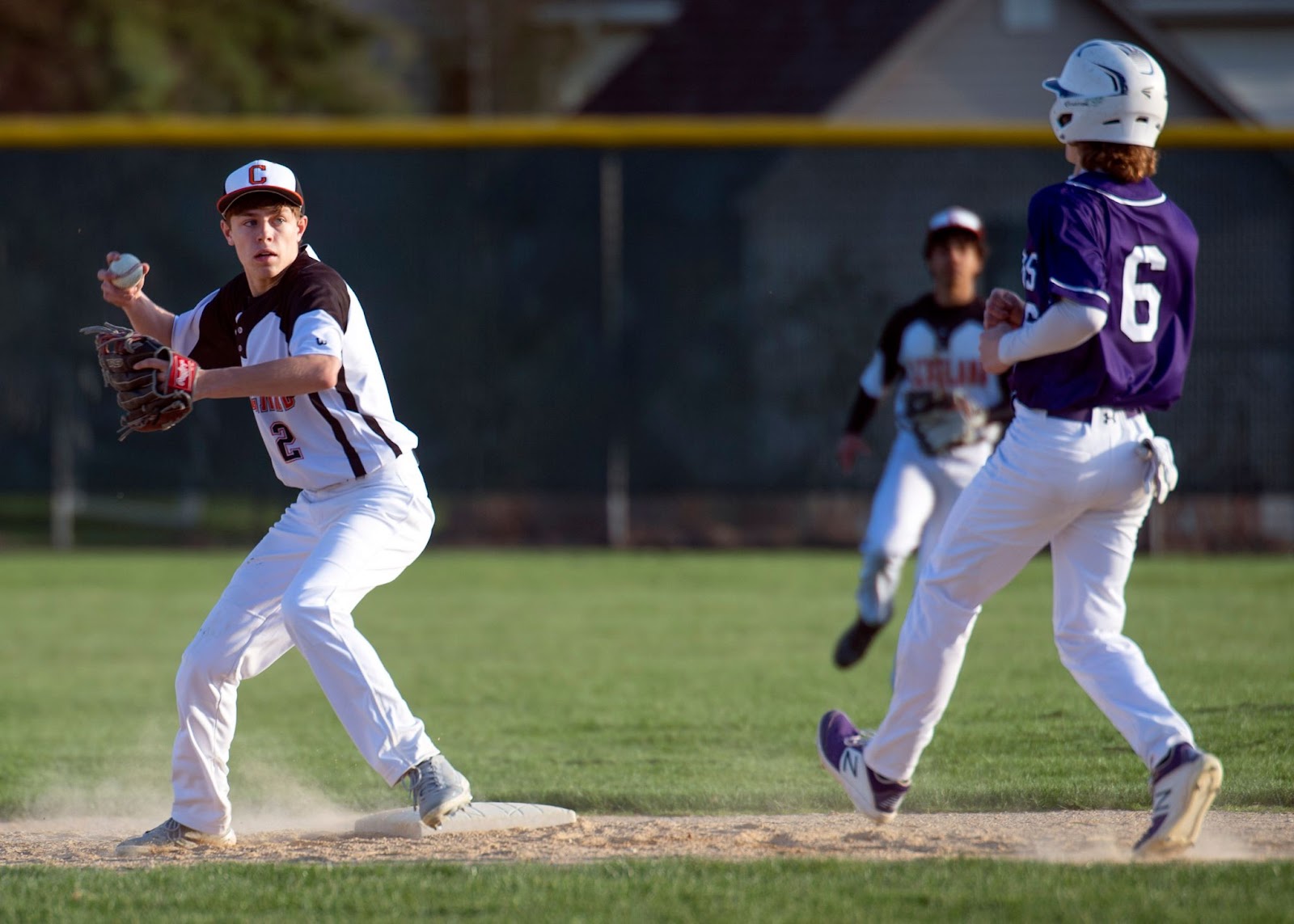