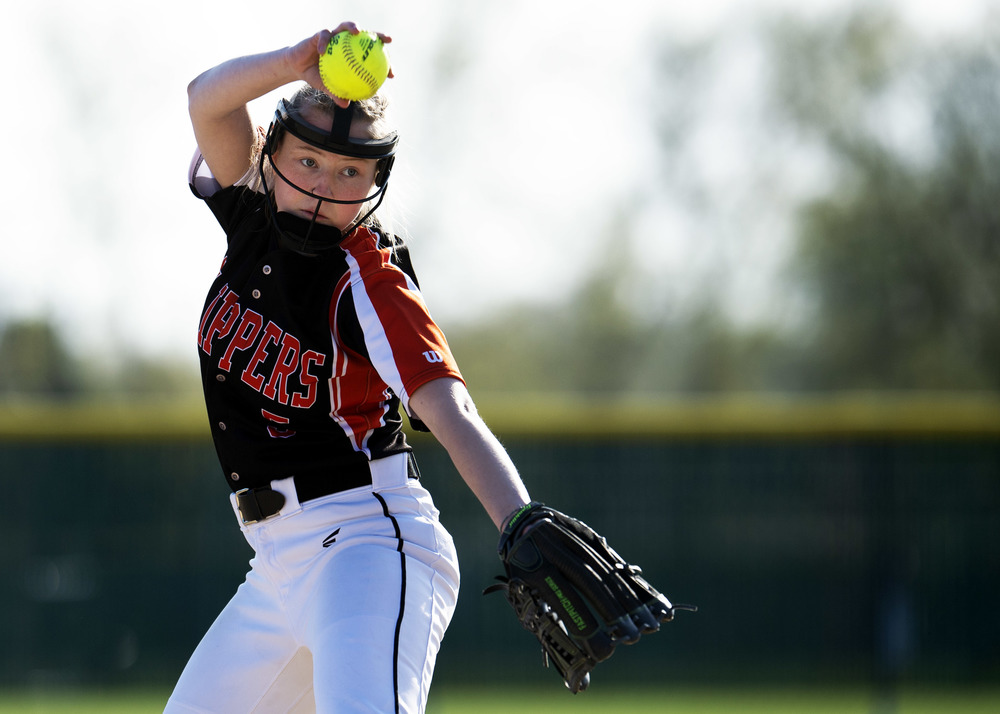 Visiting St. Clair/Loyola jumped out to a 4-0 lead after the top of the first, but the Clippers, worked their way back, broke a 5-5-tie in the bottom of the sixth and went on to win 7-5 on Thursday.

While the Spartans’ pitcher threw BBs, the rest of the defense played young.

“Other than the pitcher from Randolph, she’s probably the best pitcher we’ve faced,” said head coach Dan Fredrickson. “She threw hard and had a little change up, so that kept the girls off balance, but she put a few runners on base with walks, and that helped us out.”

With two outs, Sierra Davis (above) relieved starter Emily Kern in the sixth, but Harley Connor nailed the runner trying to steal second before Davis had a chance to fire off a pitch.

The first two batters struck out in the bottom of the sixth, but Nicole McCabe singled and stole second to get in scoring position. It looked like she was tagged out at home after an Emily Kern single, but the Spartan catcher lost the handle, and the Clippers took the lead.

Kern, who made it to second on the play, stole third and scored an insurance run on a Halle McCabe single before the Spartans retired the side with another strikeout.

With the top of the order up to start the seventh, Davis gave up a single but she struck out one too, and the Clipper defense  got the other two outs to bag the triumph.

“Sierra again…awesome job,” Fredrickson said. “Her coming in to close it out and save the game like that in a tough situation was awesome.”

The Clippers, coming off an easy 14-3 win over host Martin County West two days earlier, had a hard-luck first inning with two errors, a hit batter, a walk and a double. The four runs scored with only one hit out of the infield.

“It wasn’t fielding,” Fredrickson said. “Emily was knocking balls down that were hit back at her. We had Taylin in place to field them, or Halle, but it is hard for a pitcher not to do that. It’s one of those reaction things where it’s not necessarily an error but sort of like an infield hit.”

But the Clippers responded in the bottom of the first when Macey Ziebarth got on base on an error and Nicole McCabe got hit by a pitch. Both scored on passed balls to pull the Clippers within two runs, 4-2.

In the third, Ziebarth reached first on an infield error, and Nicole McCabe got on base after a dropped ball in the outfield. Ziebarth scored on a passed ball, and with the bases loaded, Emma Sweere, on the bases for McCabe, strolled home after Harley Connor walked to first.

Ziebarth scored again in the fourth for the Clipper go-ahead run. She singled, took two more bases on passed balls and scored when Nicole McCabe bashed a double over the left fielder.

The Clippers gave up the tying run in the sixth when Kern hit the leadoff batter. She stole second and scored when Taylin Gosch at second moved toward first and knocked down a fly ball that right fielder Kaylee Karels playing in, probably could have caught.

“Kaylee made tons of great plays all day in that short right field that we play,” Fredrickson said. “Taylin had come over and made a wonderful play earlier and made the throw to first. Being such an athlete, Taylin can cover so much ground. It was a ‘whose got it?’ type of thing. We’ve just got to be more vocal.”

The Clippers struck out a dozen times. All their five hits were part of the scoring. Kern struck out six and allowed just two hits and three walks.

At Welcome against MCW, Nicole McCabe, with a single, a double and a homer, the first of her career, was a triple away from hitting for the cycle. Kern hit one out too and had a double. Cassandra Connor had a double and a single, Brianna Connor and Grayce Kortuem each hit a double. Ziebarth, Halle McCabe, Ashley Connor and Harley Connor each hit a single.

“They just didn’t have the pitching they’ve had in years past,” Fredrickson said. “They can still hit the ball a little bit. The top half of their order is really good, but we made some nice plays in the field. The bottom half is not as good as it has usually been. I think they’re still a good team, but we hit the ball well over there.”

On an error, a walk, a two-RBI double, a single and two more walks, the Mavericks posted three runs in the fourth.

While New Ulm’s gigantic “Herman the German” statue brandished his sword from the hill above, the Cathedral Greyhounds wielded their bats on the field below on Friday to beat the Clippers 6-1.

Nicole McCabe singled in the third and scored on a Halle McCabe base hit for the Clippers’ only run.

The Greyhounds scored three runs in the third, two in the fifth and one in the sixth. Davis threw all six innings. She struck out two, walked three, beaned three and gave up 11 hits.

The Clippers travel to Truman on Tuesday. 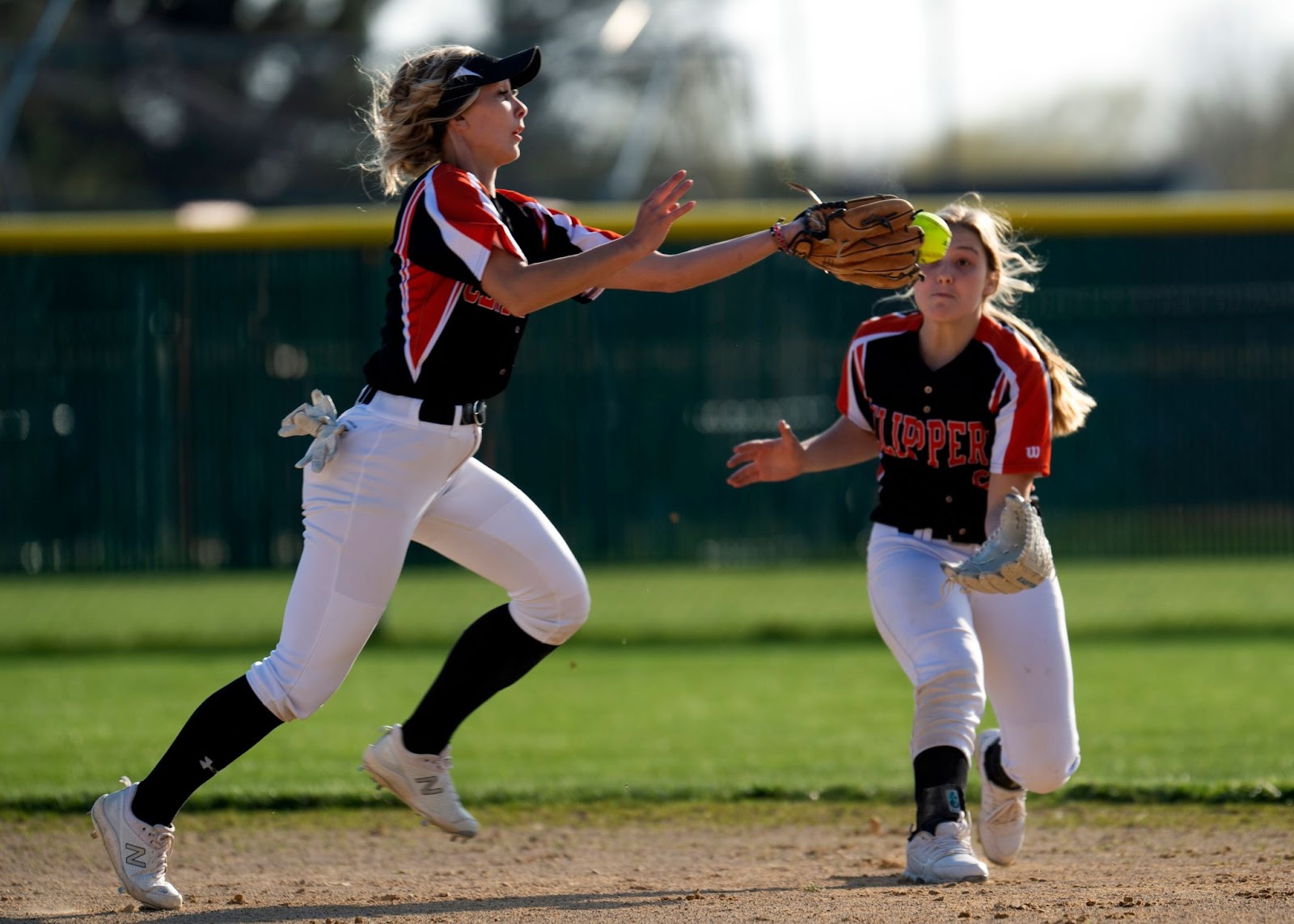 St. Clair/Loyola tied the game 5-5 in the fifth after this miscommunication error between second baseman Taylin Gosch and right fielder Kaylee Karels. 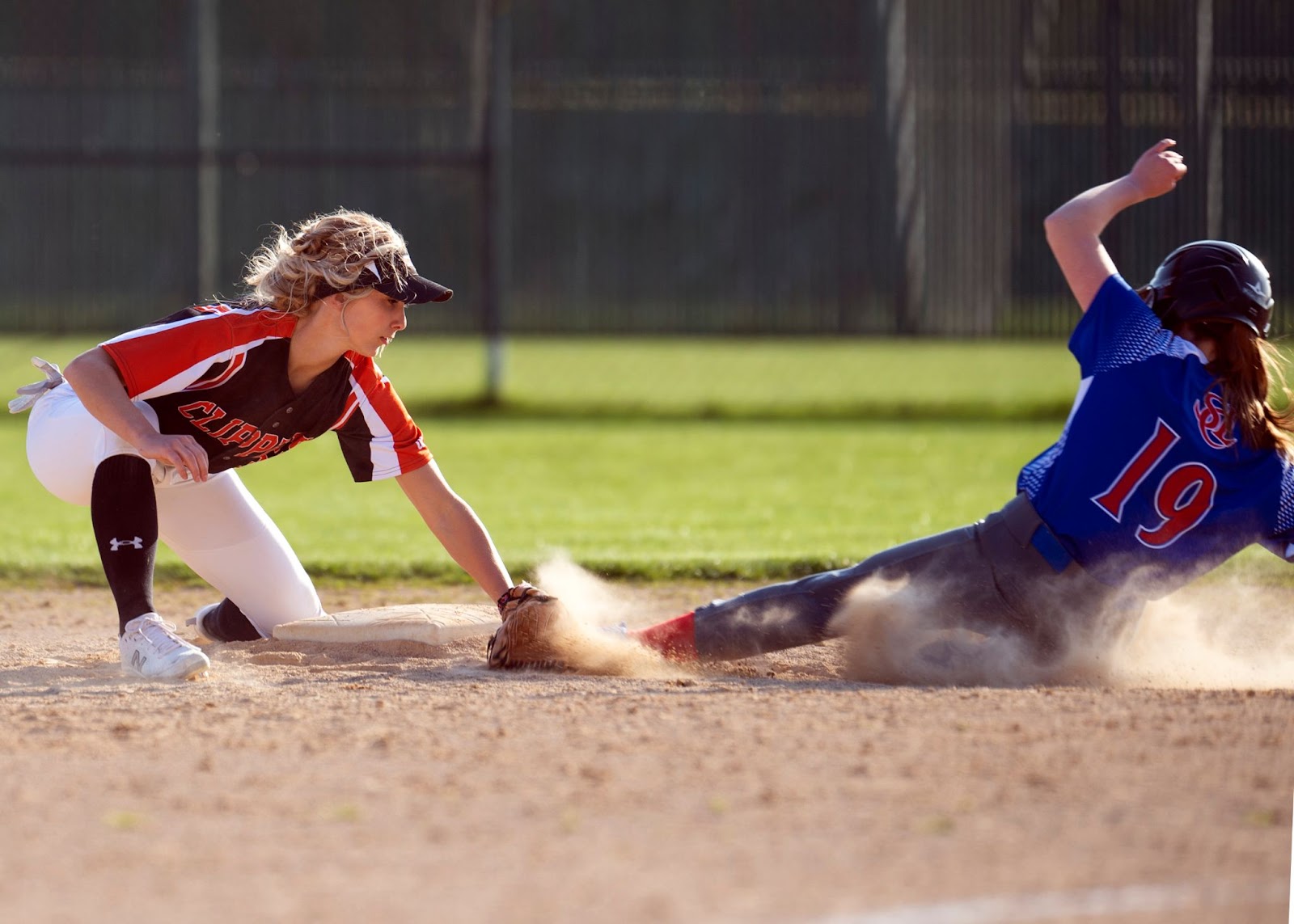 Taylin Gosch takes a catcher Harley Connor throw in for a tag for a big third out in the sixth against St. Clair/Loyola. 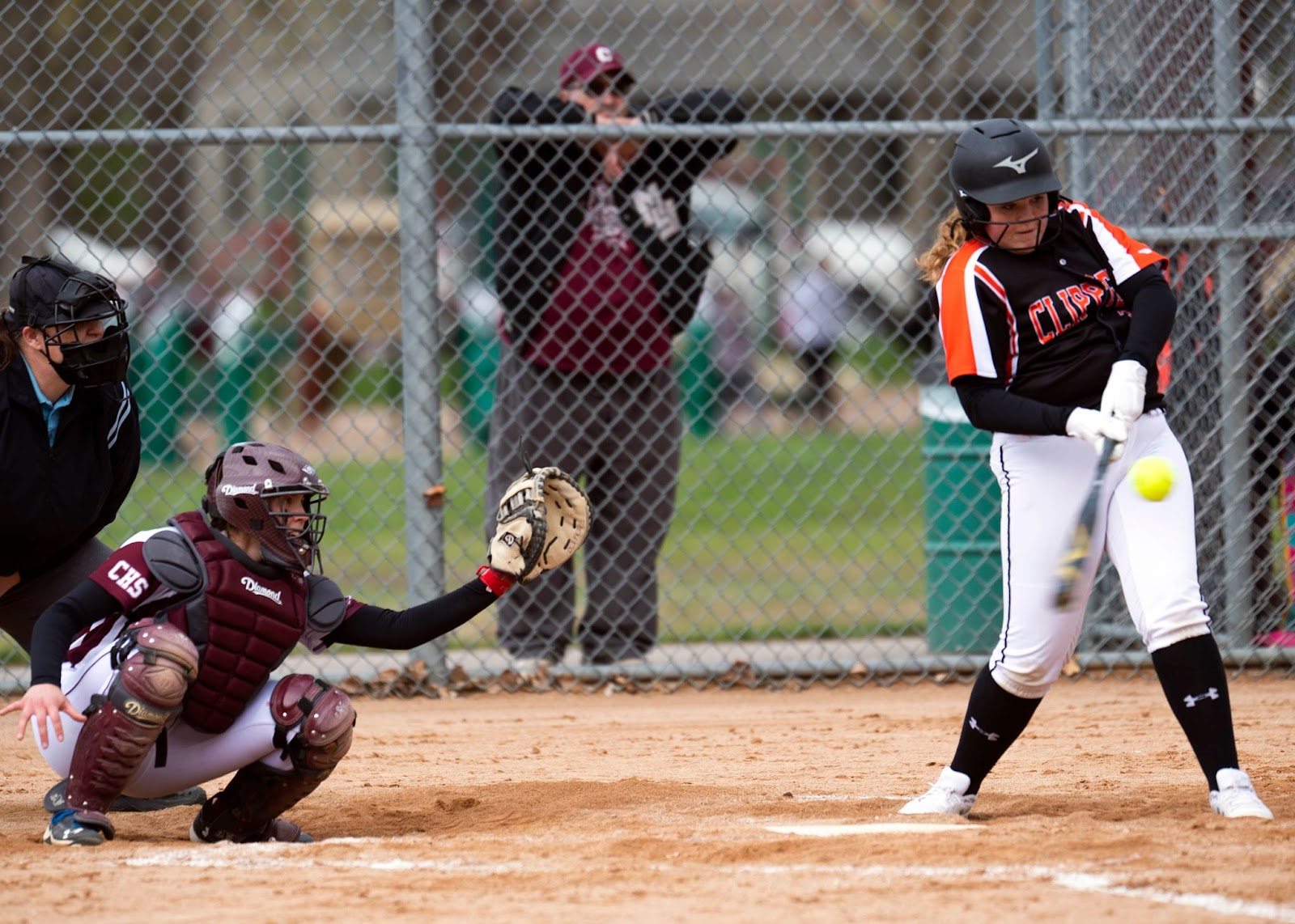 Cassandra Connor puts the ball in play at New Ulm.