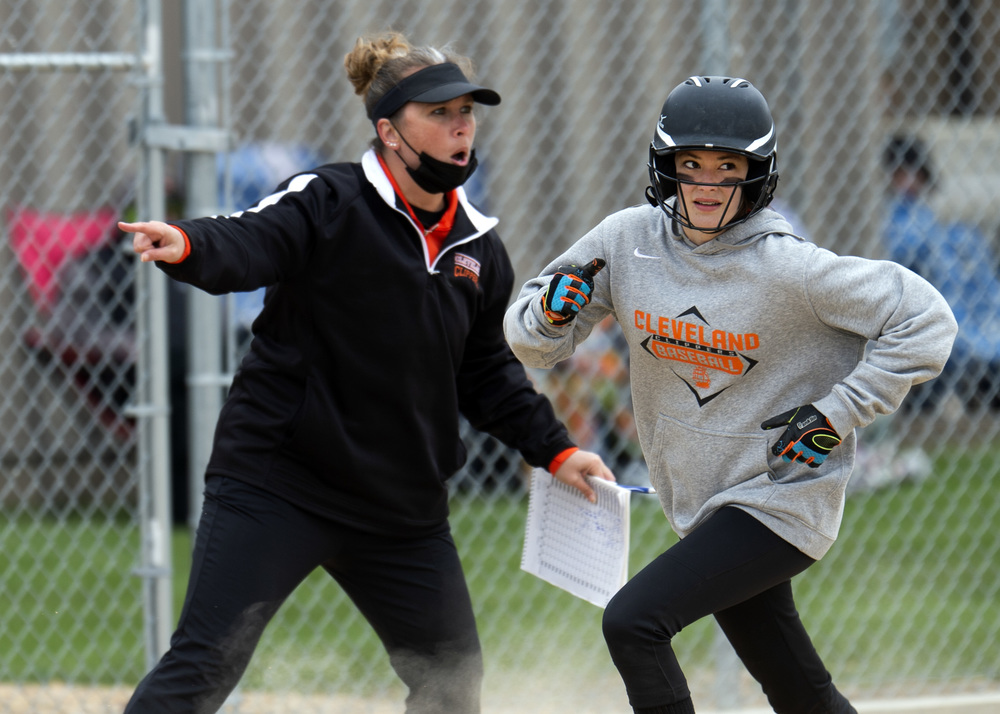 JV girls win one of four

The Clipper JV girls had four games in three days a week ago before having this week off.

They came up short against visiting St. Clair/Loyola on Thursday, bounced back to beat host New Ulm Cathedral on Friday and lost to Madelia and Lake Crystal-Wellcome Memorial in a blustery three-team round-robin tournament on Saturday.

This week, the JV girls travel to Madelia on Tuesday and to Nicollet on Thursday.

Lead off Greta Hahn got hit by a pitch and scored on a Sophie Shouler double. Shouler touched home plate on an Emma Sweere sacrifice fly to put the Clippers up 2-0 going into the second.

The Spartans responded with a couple of hits after a walk and an error for a 2-2 tie. On two more hits in the third, they went up 3-2.

Olivia Shouler walked and scored on an error in the bottom of the third, but the Spartans came right back with three runs on a walk, a double and a couple of Clipper miscues for a 6-3 advantage.

Shouler and Sweere had back-to-back base hits in the fourth. Shouler scored on escaped pitches while Sweere crossed the plate on a Hailey Plonsky grounder to pull the Clippers within a run.

But the Spartans replied with two doubles and a walk and then took advantage of a Clipper error for three more runs.

In the final frame, Jersie Kelley singled and scored on an Asia Kern sacrifice fly. Olvia Shouler got on board on an error and scored on a Madysen Seely walk, but the Clippers left the tying and winning runs on the base paths.

Plonsky went all five innings in the circle for the Clippers. She struck out two and gave up seven hits and three walks.

The Clippers scored the three runs they needed in the seventh to take the lead against the Greyhounds 9-8 and then held on for the win.

Taking advantage of a single, two doubles and a triple, the Greyhounds posted three runs in the first. With a walk, four singles and a double, they added five more runs in the third to go ahead 8-2.

But the rest of the game was all Clippers.

In the fourth, Sweere singled and scored after a  Plonsky base hit. The Clipper added three more runs in the sixth when Lilly Lamont walked and Greta Hahn, Sophie Shouler and Sweere teamed up for three-straight doubles

In the second, Laci Hollerich led off with a walk.  Plonsky blasted a triple, and McCabe scored Plonsky with a single.

The Clippers tallied 14 hits. Lamont doubled in the second. Lamont threw for the first two innings. Plonsky took over after that.

Trailing 9-5, Madelia came back in the seventh with five runs for the walkoff win.

Greta Hahn got hit by a pitch and scored on a Hollerich double to put Cleveland up 1-0, but shaky on defense all day, the Clippers errored three times, and starter Lamont gave up a hit for a 1-1 tie going into the second.

The Clippers went up 4-1 in the top of the second after Cassandra Connor, Waldron and Ava Hahn pieced together three-straight singles to juice the bases. Lamont hit a two-RBI double, and Hahn scored when her older sister grounded out.

Hollerich doubled in the fifth and crossed the plate on a McCabe smash to deep center for an in-the-park homer (shown coming around third above) that put the Clippers in front 8-4. But after Connor and Waldron singled and Ava Hahn got hit by a pitch, the Clippers left three stranded on a force out at third.

The Clippers final run came in the sixth when Greta Hahn singled, swiped second and third and scored on an error.

On a double and a pair of singles, the Blackhawks brought in one run in the third. After two singles and a hit batter, they added two runs in the fourth. On a walk, an error, a hit batter and a single, they posted another run in the sixth but left the bases loaded.

The Clippers had 15 hits, seven more than Madelia. McCabe hit a single, a triple and a home run. Hollerich hit a triple and a double. Connor had three singles. Waldron and Greta Hahn each had two base hits. Lamont had a double. Ava Hahn and Kern each had a single.

Lamont struck out seven in six and a third innings pitched. Kern stepped in the circle in the seventh. The Clippers had four errors.

The Knights outhit Cleveland 14-2. Sweere threw the first six innings. Ava Hahn, up from junior high, took over in the seventh.

The Clippers whiffed nine times. A Sweere triple in the seventh was the only other Clipper hit. 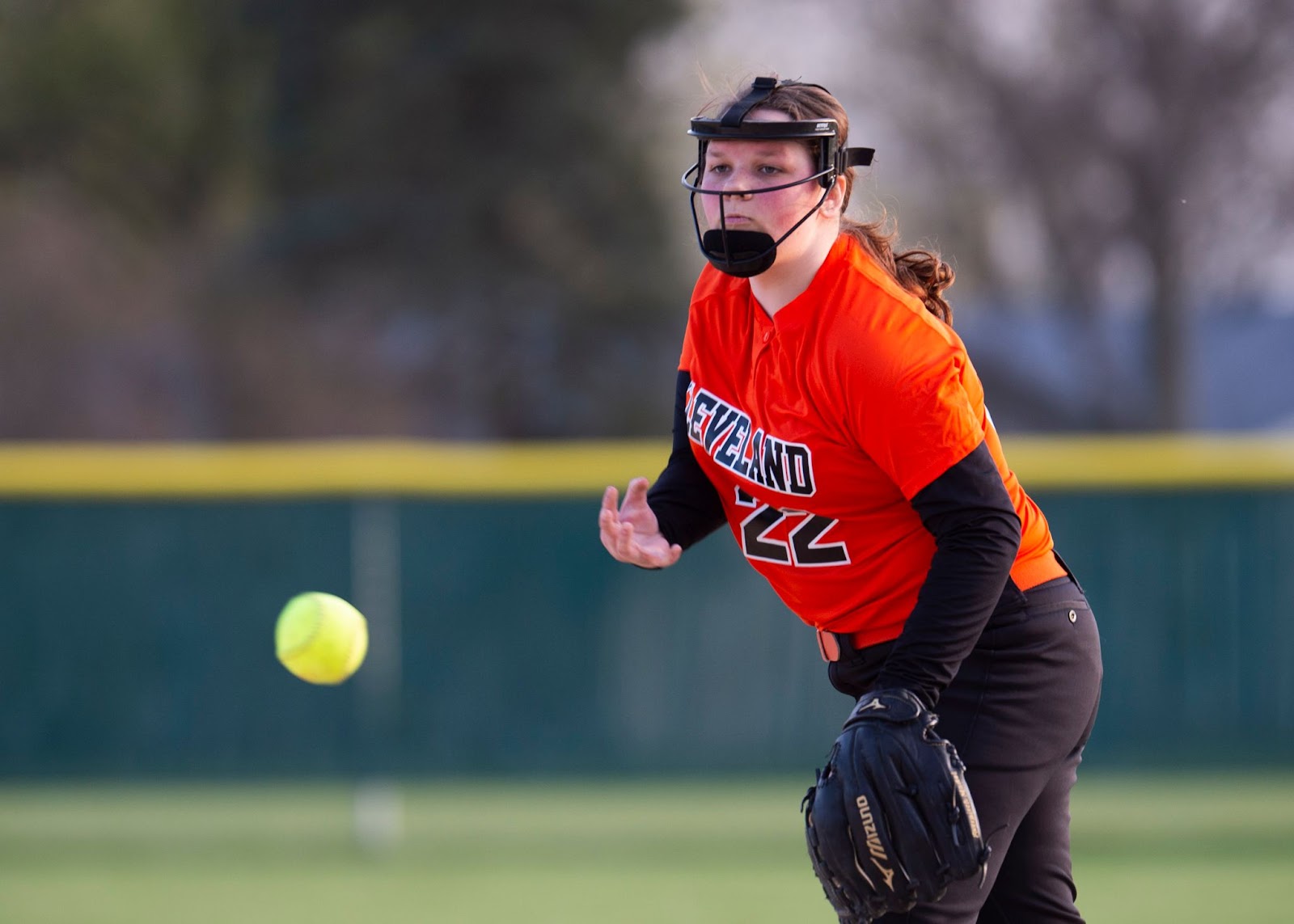 Hailey Plonsky took a tough-luck loss at home against St.Clair/Loyola. 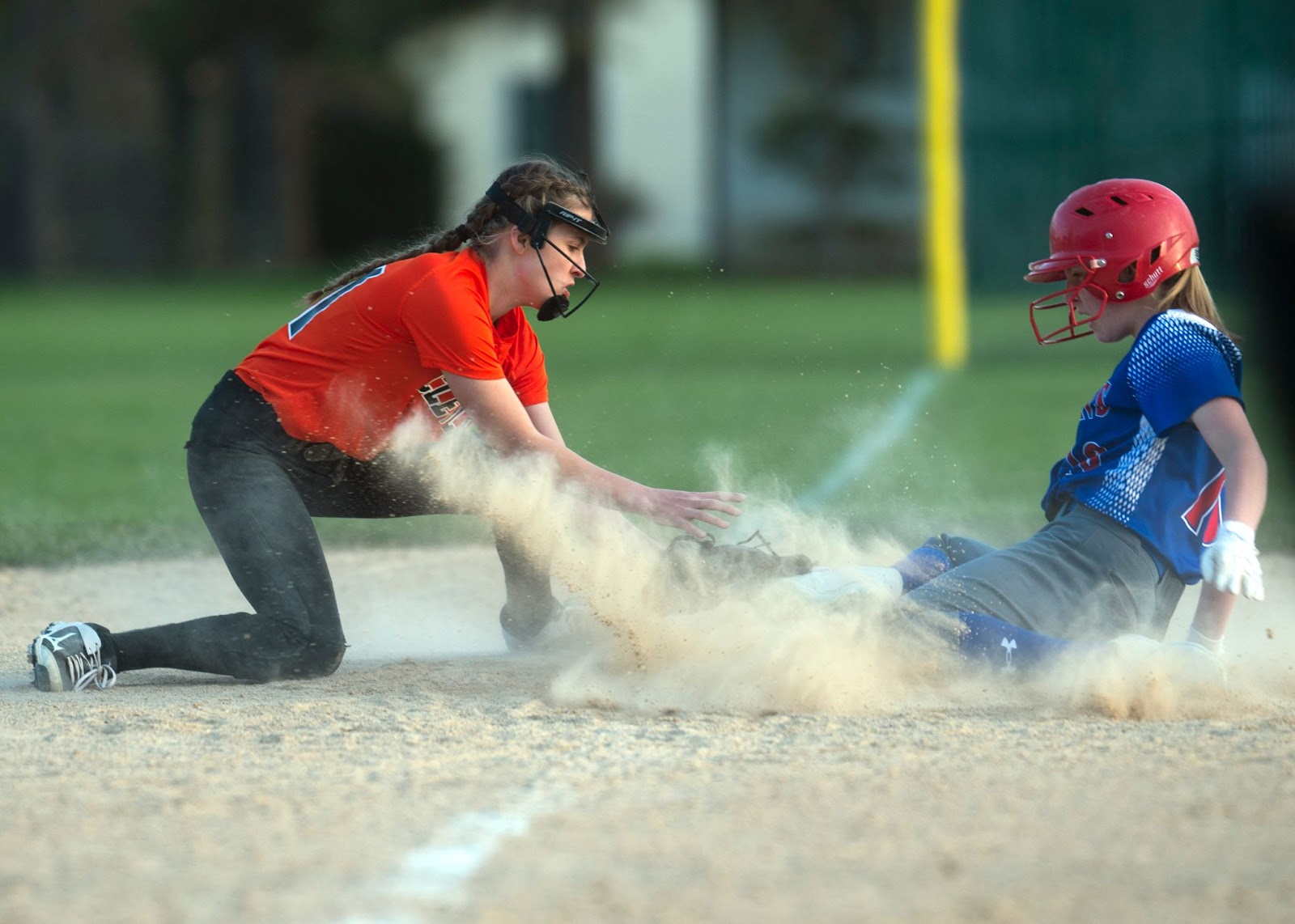 With the Clippers recovering after an error on the play, Sophie Shouler applies a tag against a St. Clair/Loyola runner for an out. 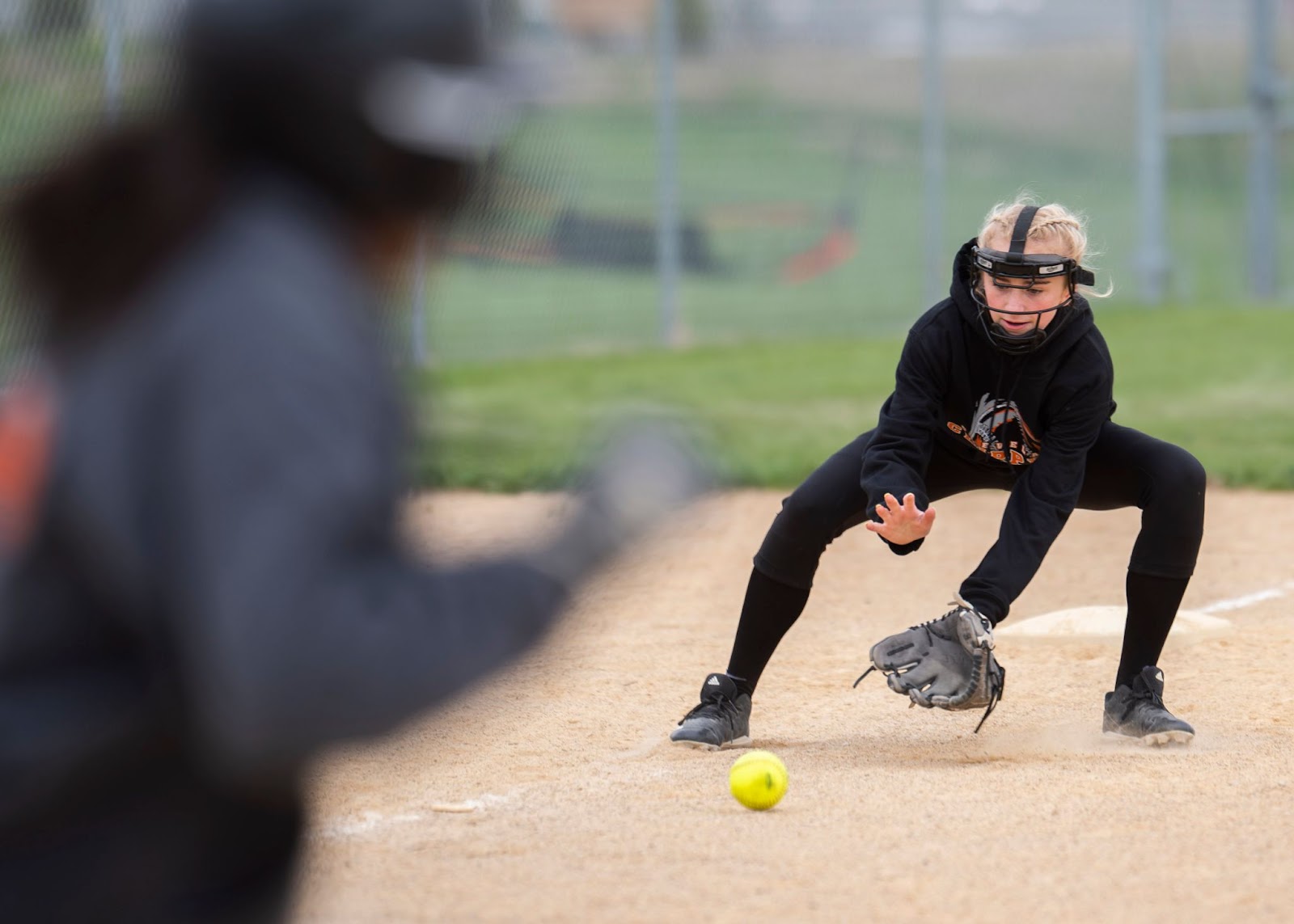 At third, Ava Hahn scoops up the ball against Madelia at Lake Crystal. 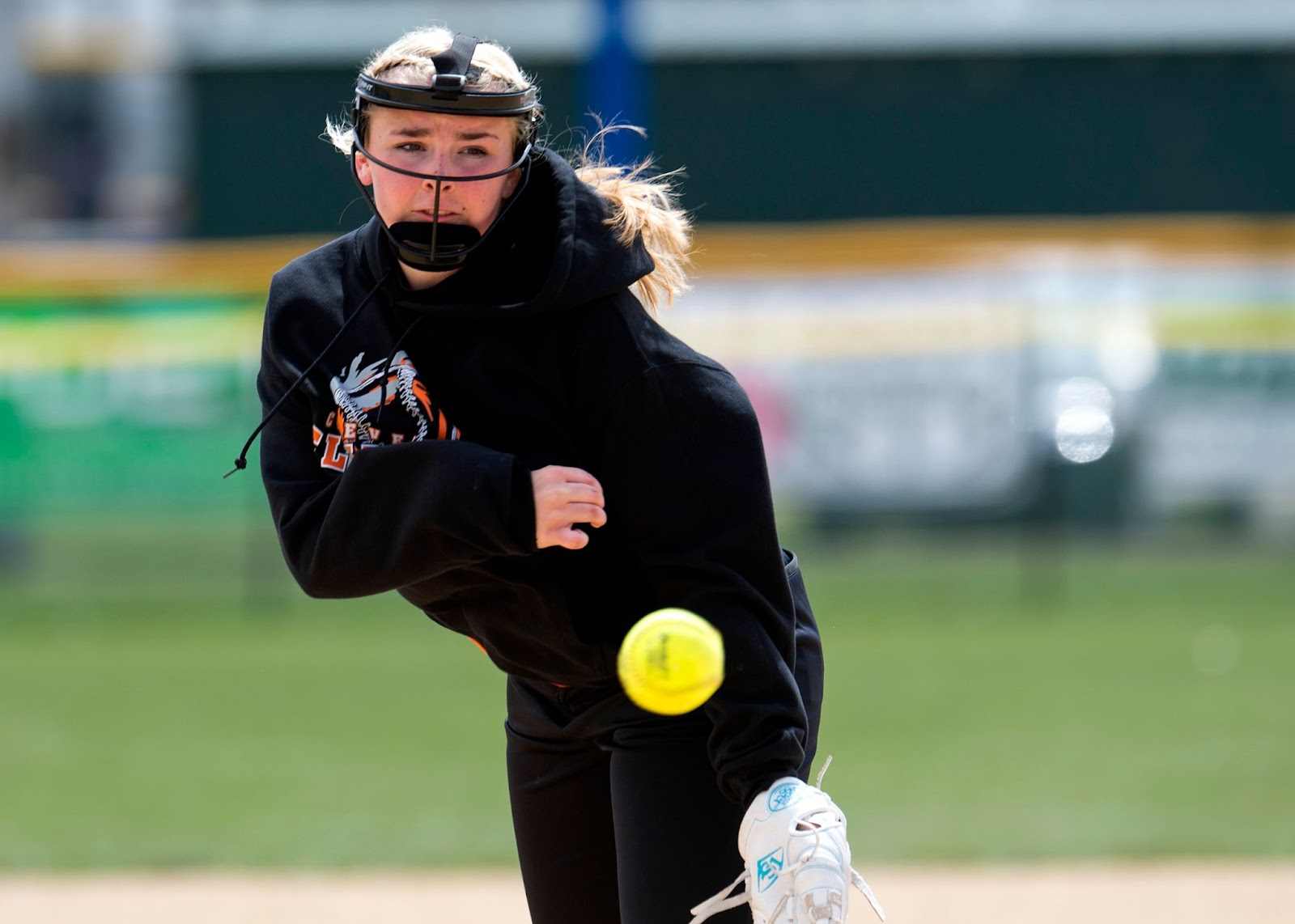 Lilly Lamont threw for most of the Clippers’ game against Madelia.