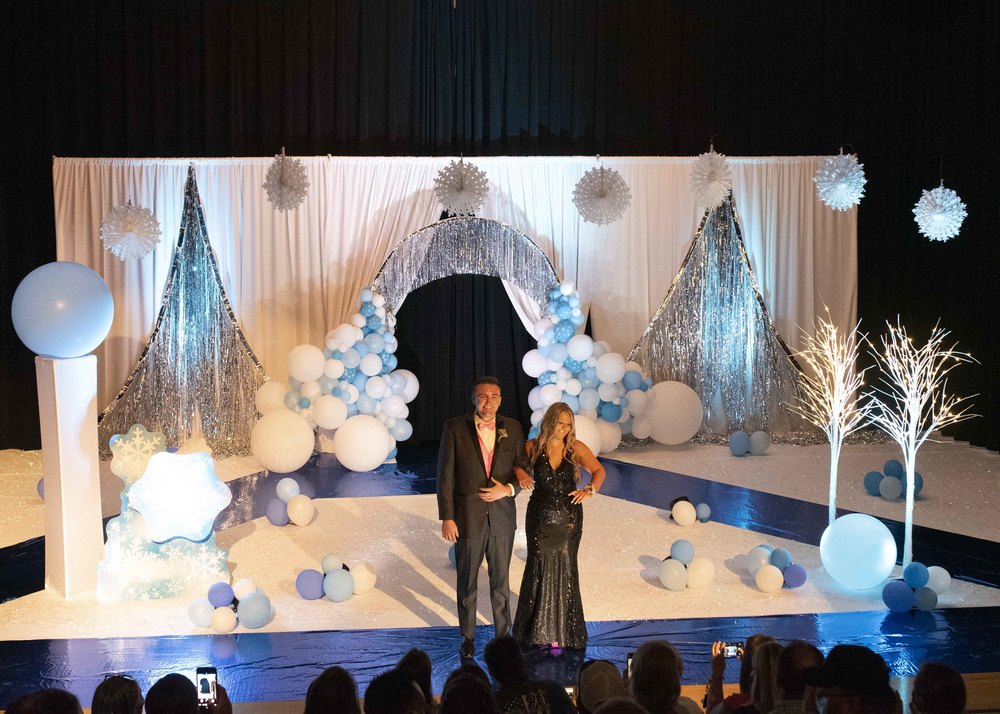 As fourth graders, Macey Ziebarth and Isaac Mueller vowed to each other they would one day attend Cleveland prom…together.

However, with their junior prom canceled a year ago and this year’s prom tentative too,  the pair doubted they could ever keep their promise.

But with the world gaining on COVID-19, and through the hard work and cooperation of parents and school staff, the annual rite of passage took place on Saturday, more or less as usual.

And, as one of 38 couples attending the event, the two friends fulfilled their eight-year-old pledge.

“Isaac and I have always remembered that promise, and today we kept it," Ziebarth said. "Many schools were not able to have a prom, but we were fortunate enough to have such amazing parents and staff come together and pull it off."

Like for the rest of the attendees, Saturday started early for her as she dolled up for what would be a long day. After Mueller picked her up, the pair met up with other couples and parents for a photo op. Later, they got together with classmates for dinner at a nearby restaurant.

“It was so much fun getting my hair and makeup professionally done and then going to pictures with all my friends," Ziebarth said.  "It was cool being able to go out to eat with everyone in a restaurant.”

“Frozen in Time" was the theme of the grand march, which was  held as usual in the school auditorium. Students paraded through icicles and giant snowflakes.  Sophomores Caitlynn McCarthy and Henry Strobel were the mistress and master of ceremony.  Afterwards attendees danced to music provided by Kern Brothers Entertainment with athletic director Rich Kern as the DJ.

Decorated with playing cards and poker chips and dice, the after-party in the new addition had a casino theme and the apt slogan “This is how we roll.”

A food truck in the parking lot offered fries, cheese curds and tacos in a bag. In the gym, teams of prom goers competed in games ranging from blackjack to bean-bag toss to pinball and bubble hockey. The tickets they earned from the games went into drawings for prizes, big and small…TVs, Chromebooks, Apple watches. The group was also entrained by a dueling piano act.

A decades-old tradition at CHS and across the US too, prom is a celebration of the high school experience and, for seniors like Ziebarth, is a last hurrah. It is also one of the few rites of passage that allows students to present themselves as emerging adults. The boys don tuxedos or suits, and the girls wear elegant dresses, shedding any appearance of adolescence….if only for one evening.

Ziebarth said the prom and after party, with all its games and prizes, went beyond her expectations, and it will be a memory to cherish.

“Prom is such a huge event that you will always remember forever. You make the best memories with everyone, and everyone looks so gorgeous, and you’ll always remember that. I am so thankful for everything that happened at prom. It will definitely be among my favorite high school memories.” 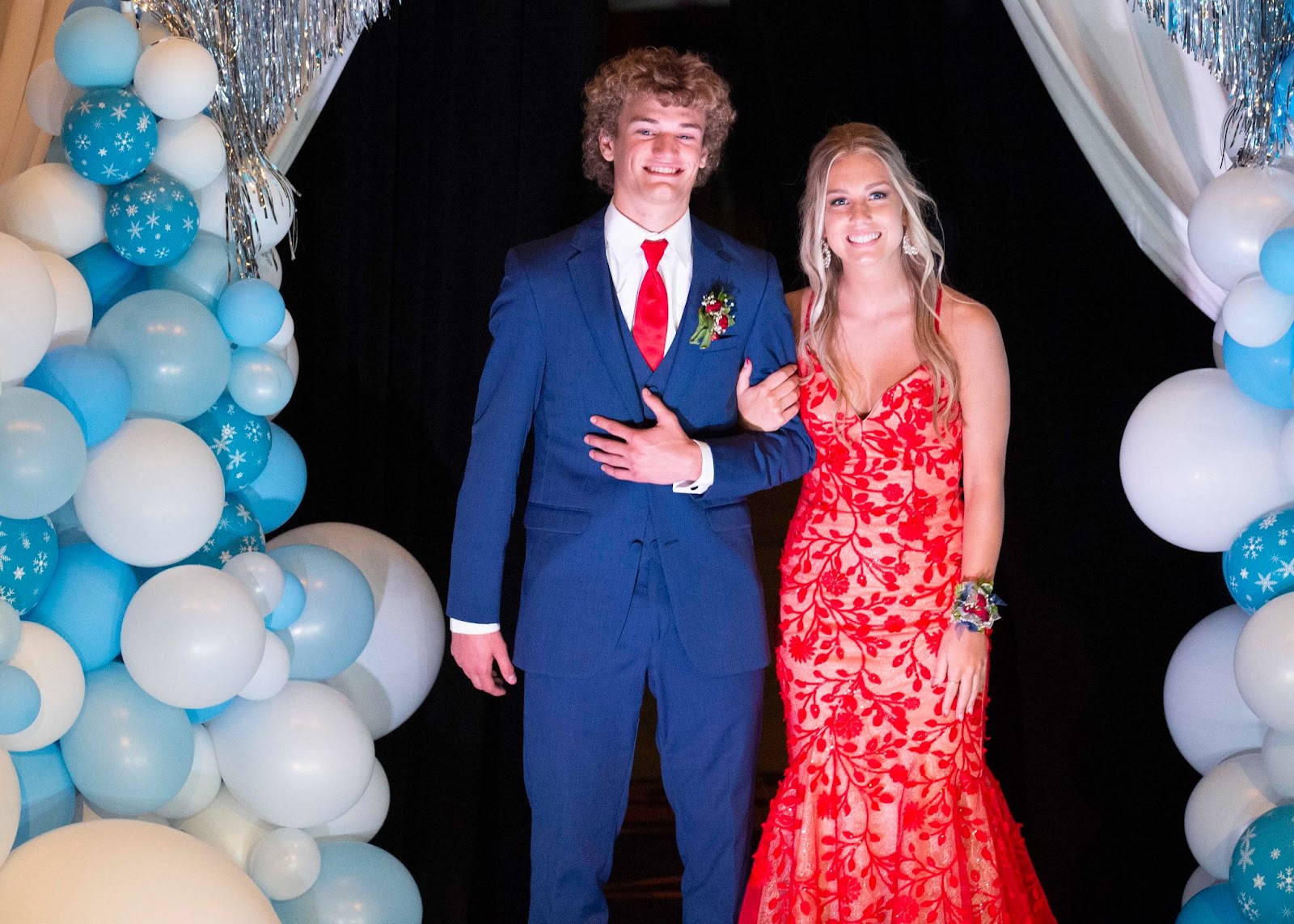 As fourth graders, Isaac Mueller and Macey Ziebarth promised to attend prom together. On Saturday, they finally fulfilled that pledge. 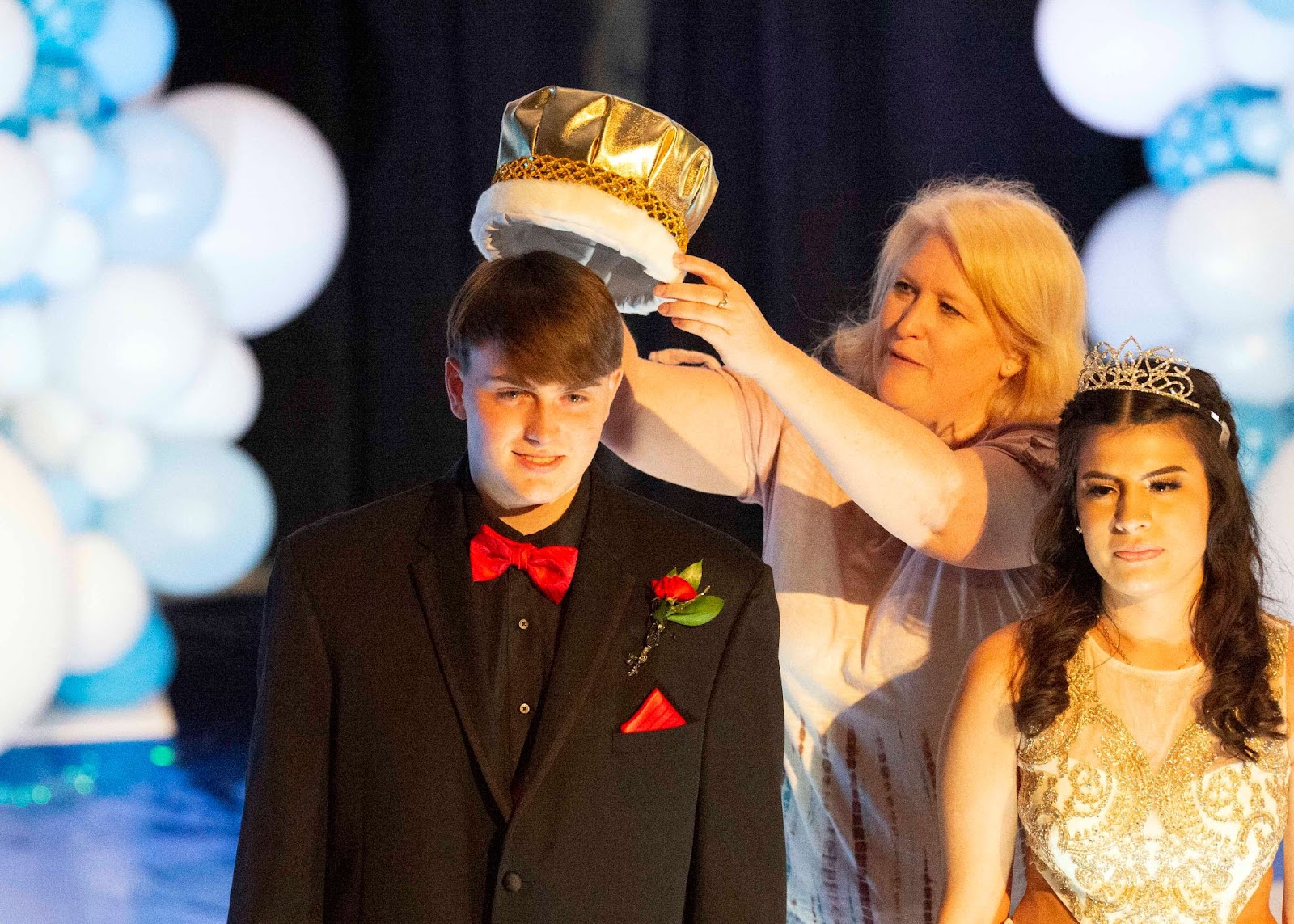 After she drew their names out of a hat, prom coordinator Lisa Pope crowned Cody Ranger prom king and Clarissa Williams prom queen. 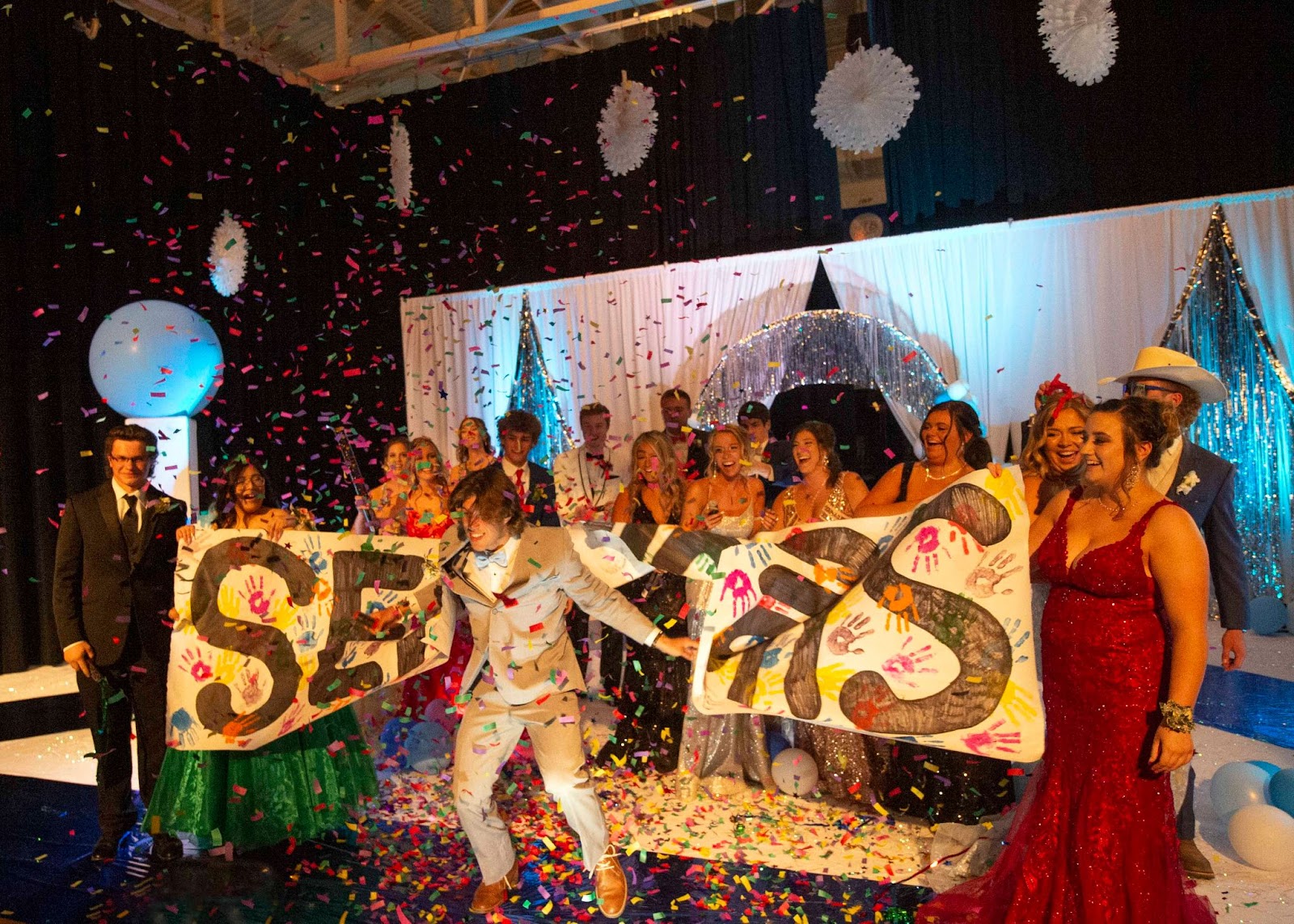 Alex McCabe breaks through the senior banner after the grand march. 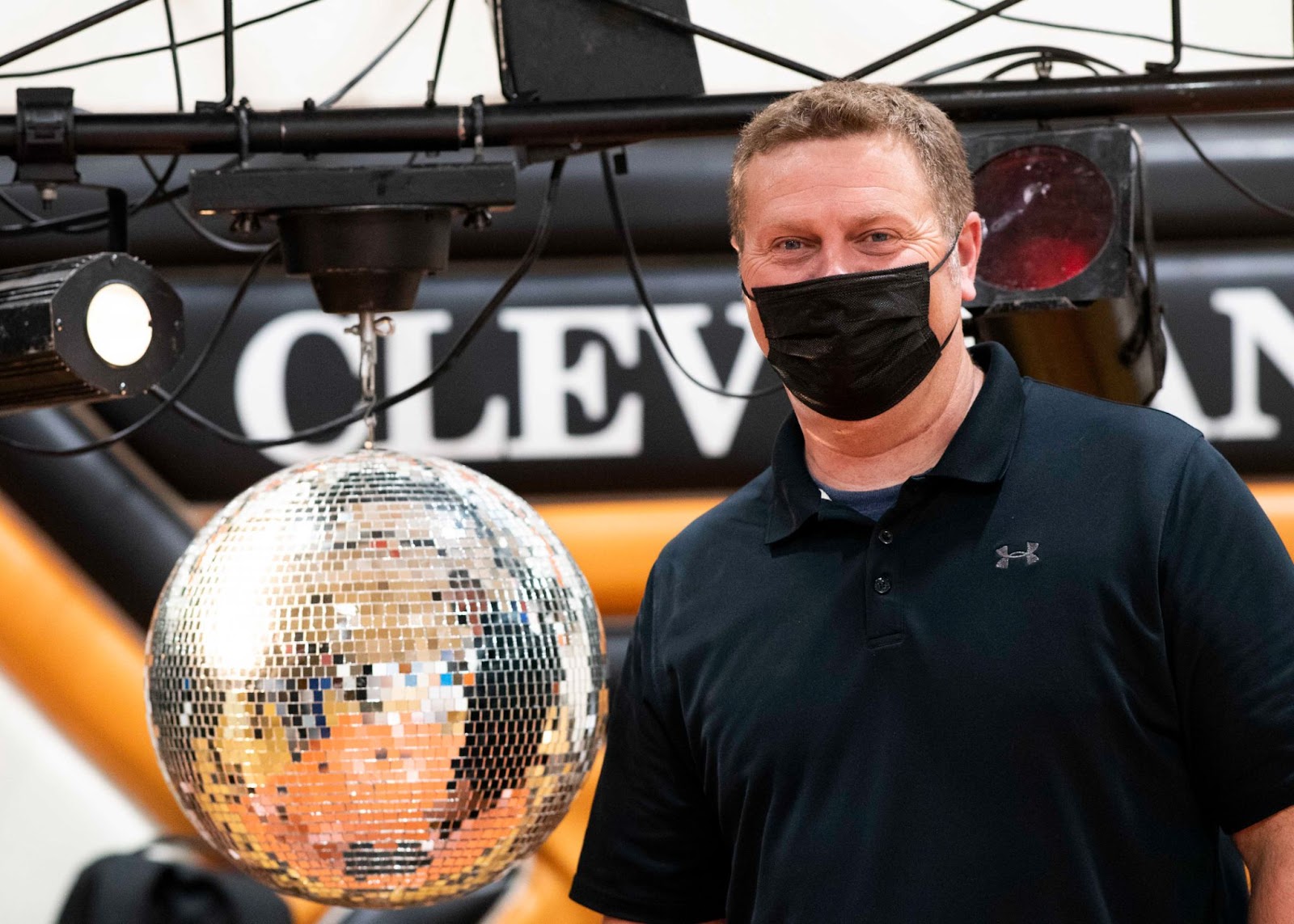 DJ Rick Kern spun the music for the dance. 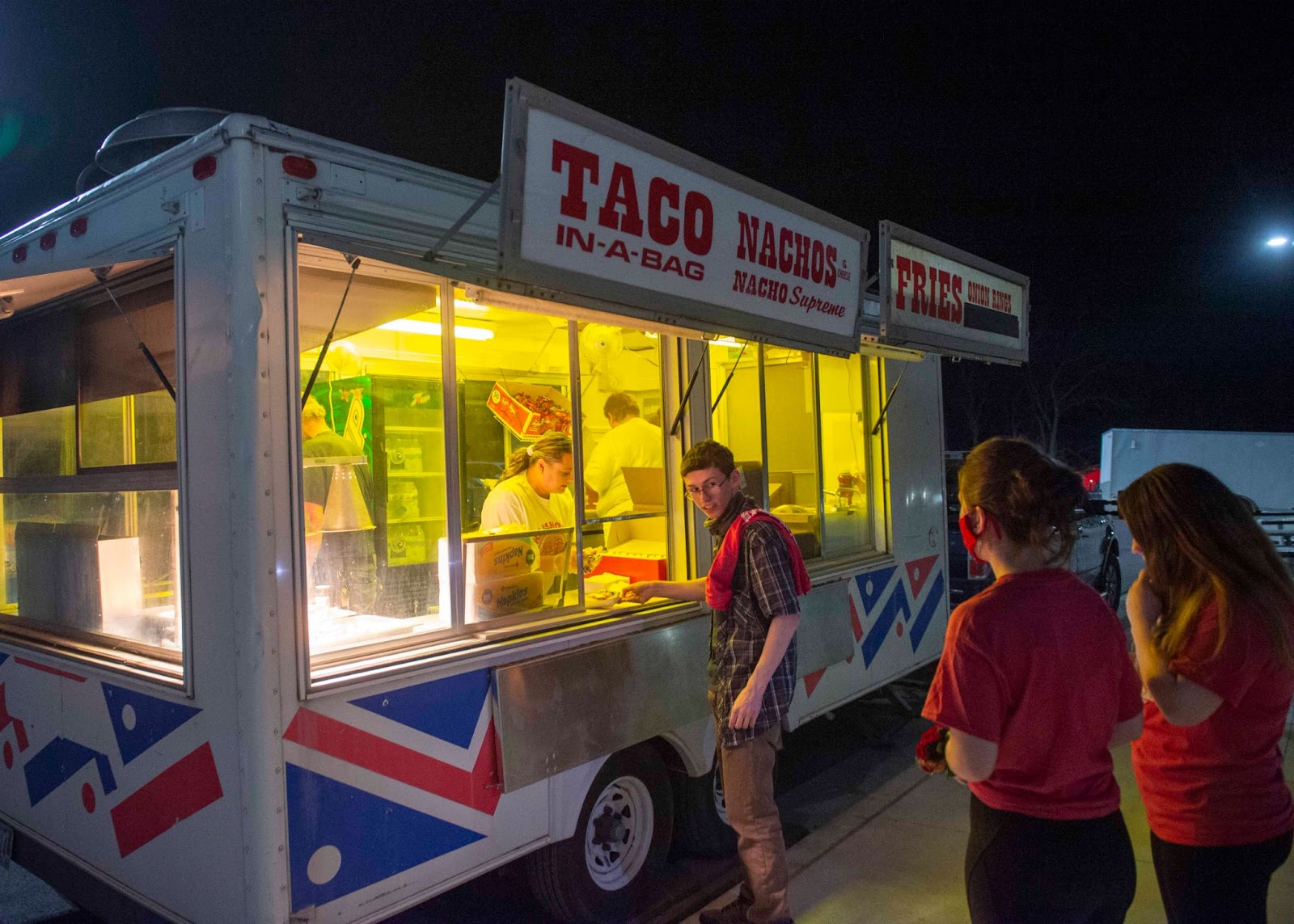 Besides snacks available all night, a food truck served the after-prom party for the first couple of hours. 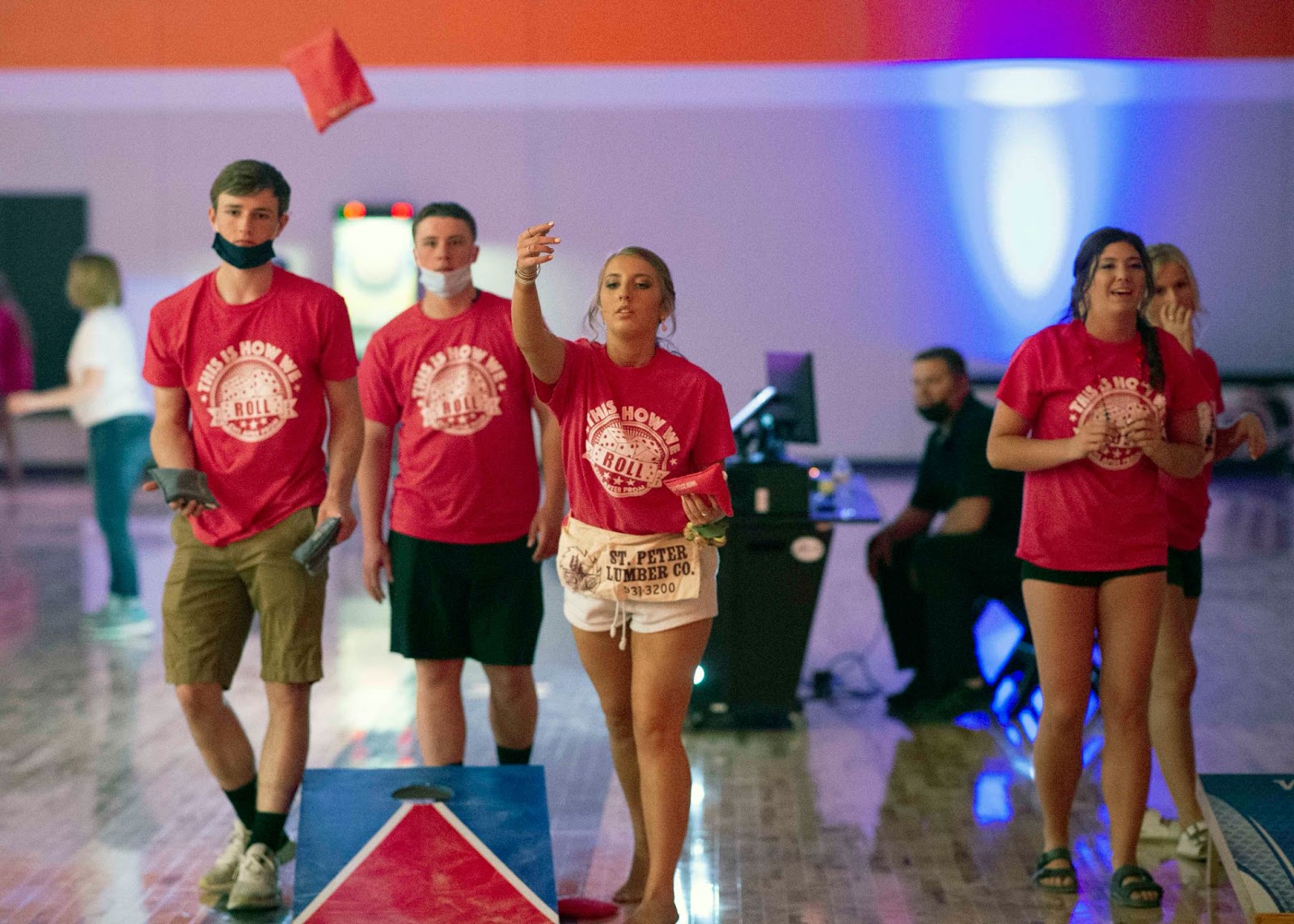 Allison Jindra tosses a bean bag in the games competition. 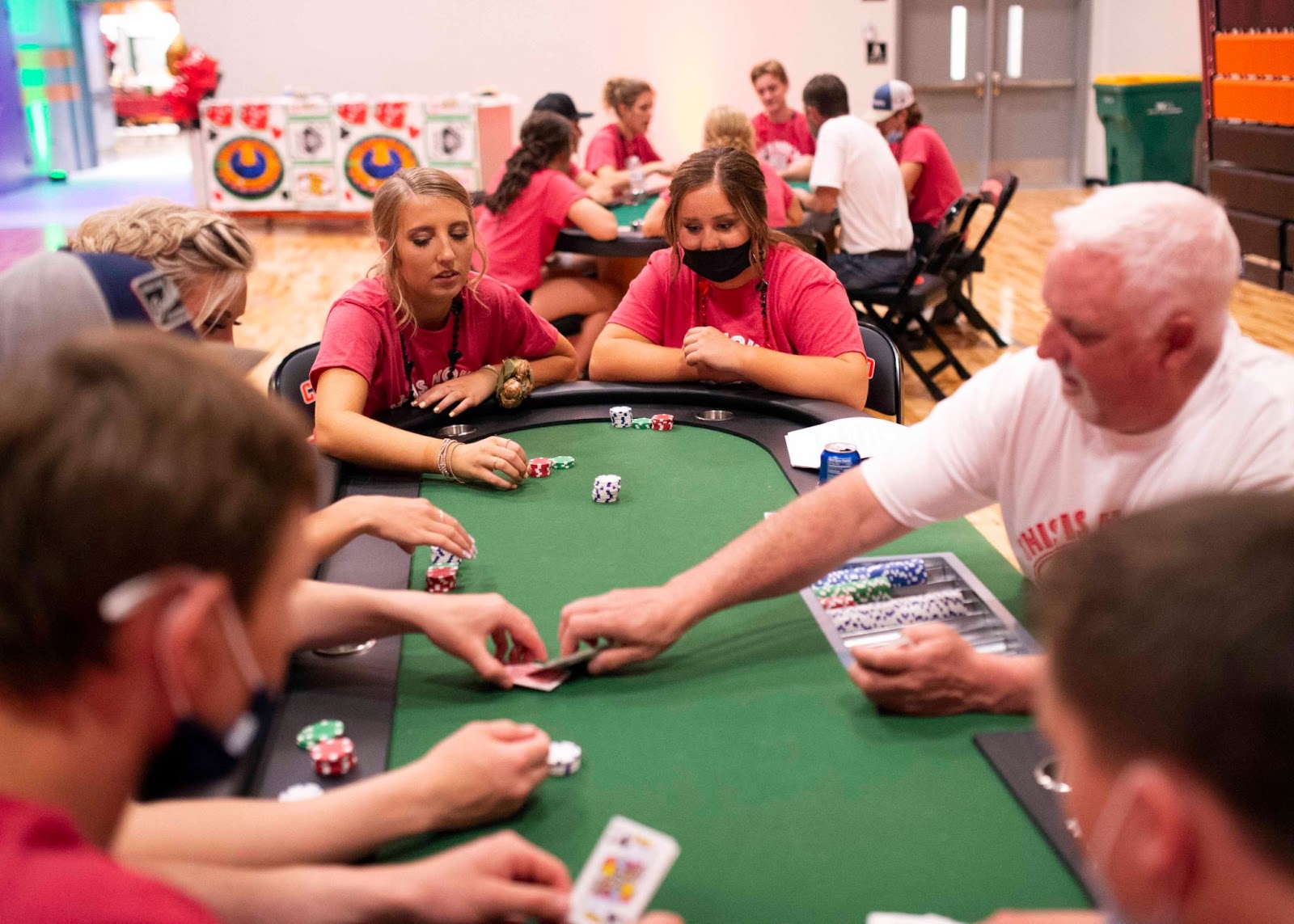 Prom goers could earn prize tickets at one of three blackjack tables. 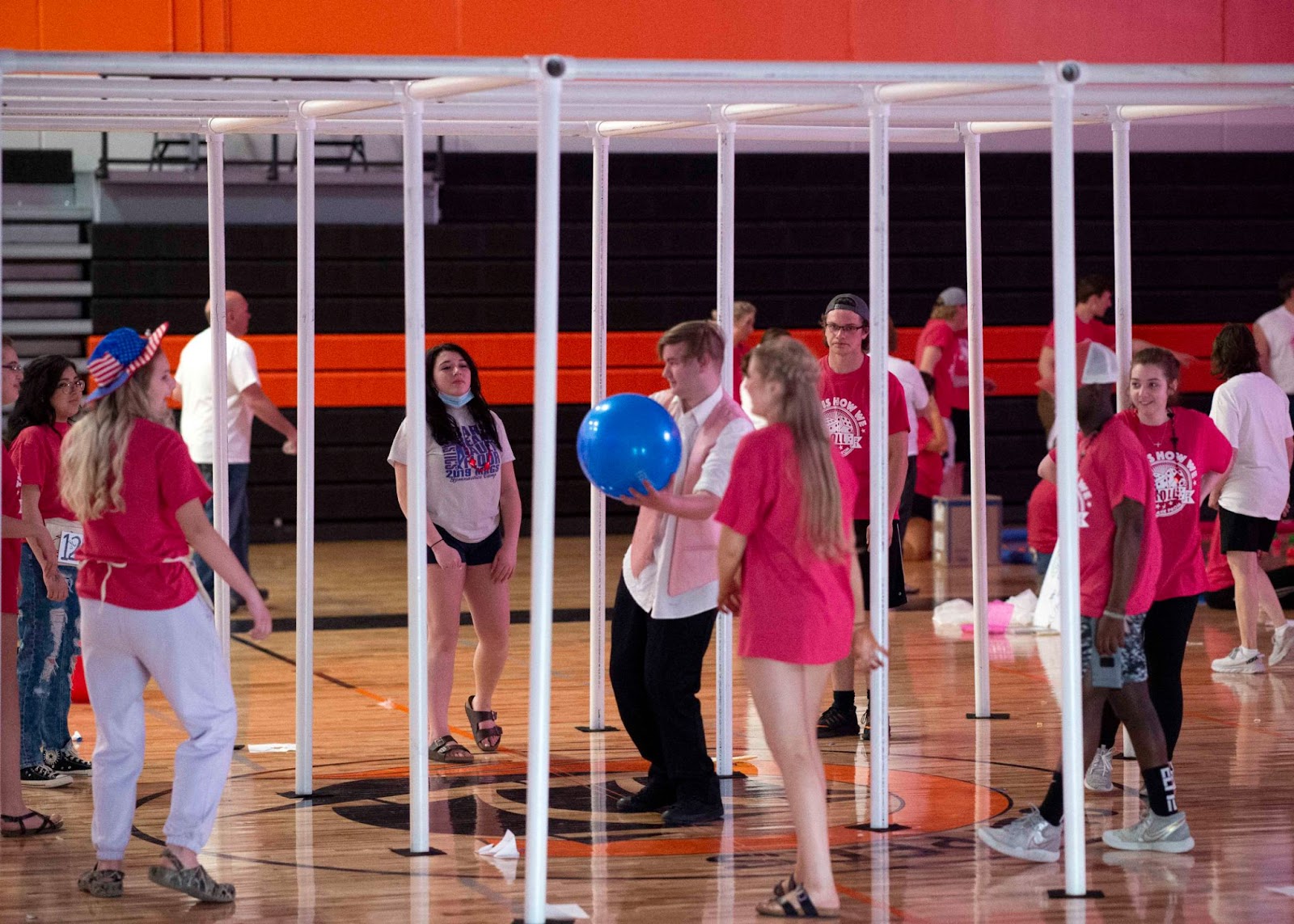 This game was kind of like playground four-square, except the idea was to get the ball over the lattice work on top and into one of the other five squares. 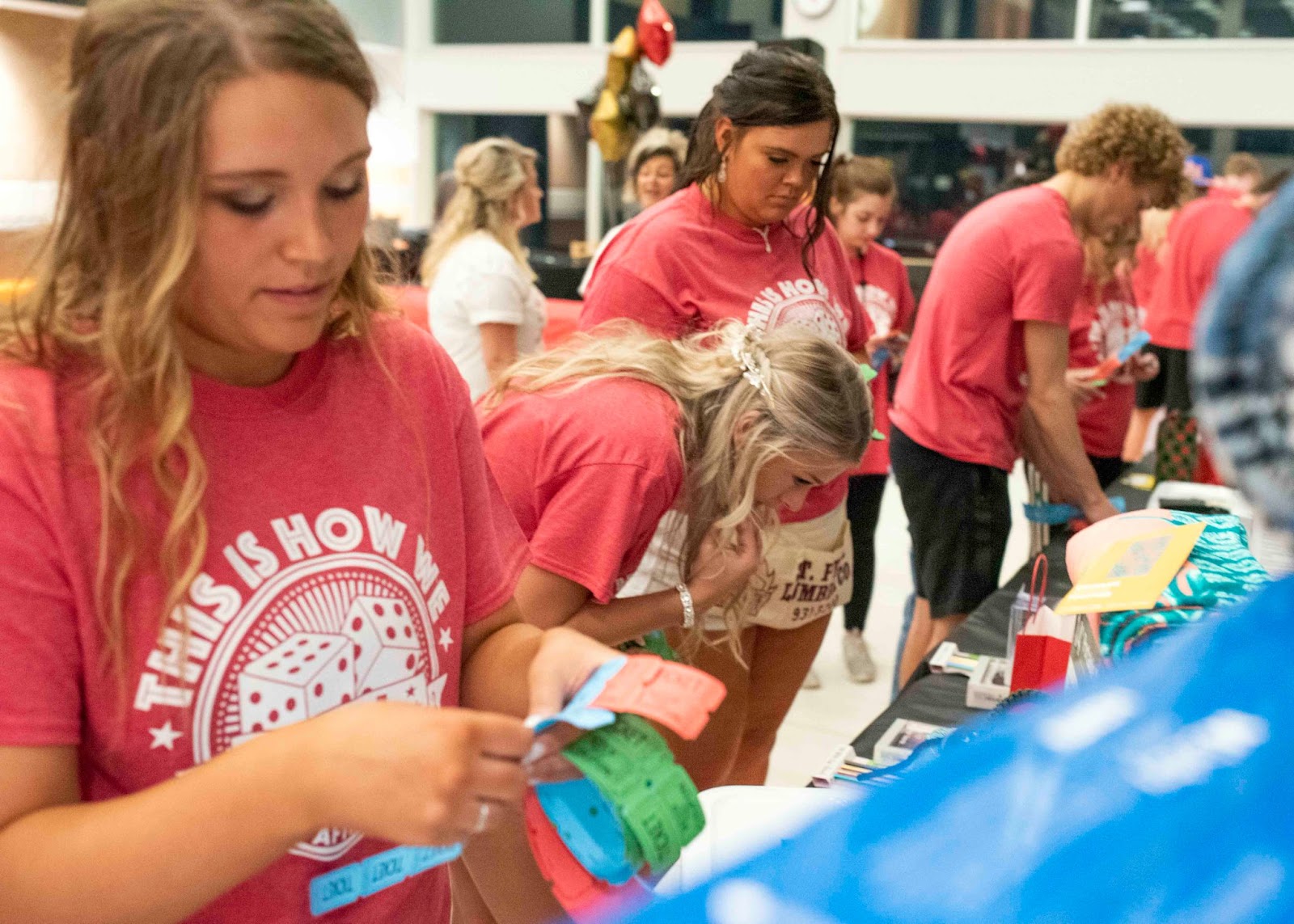 Tickets earned at the games went towards prize raffles. Here, students choose which prizes they want to bet on. 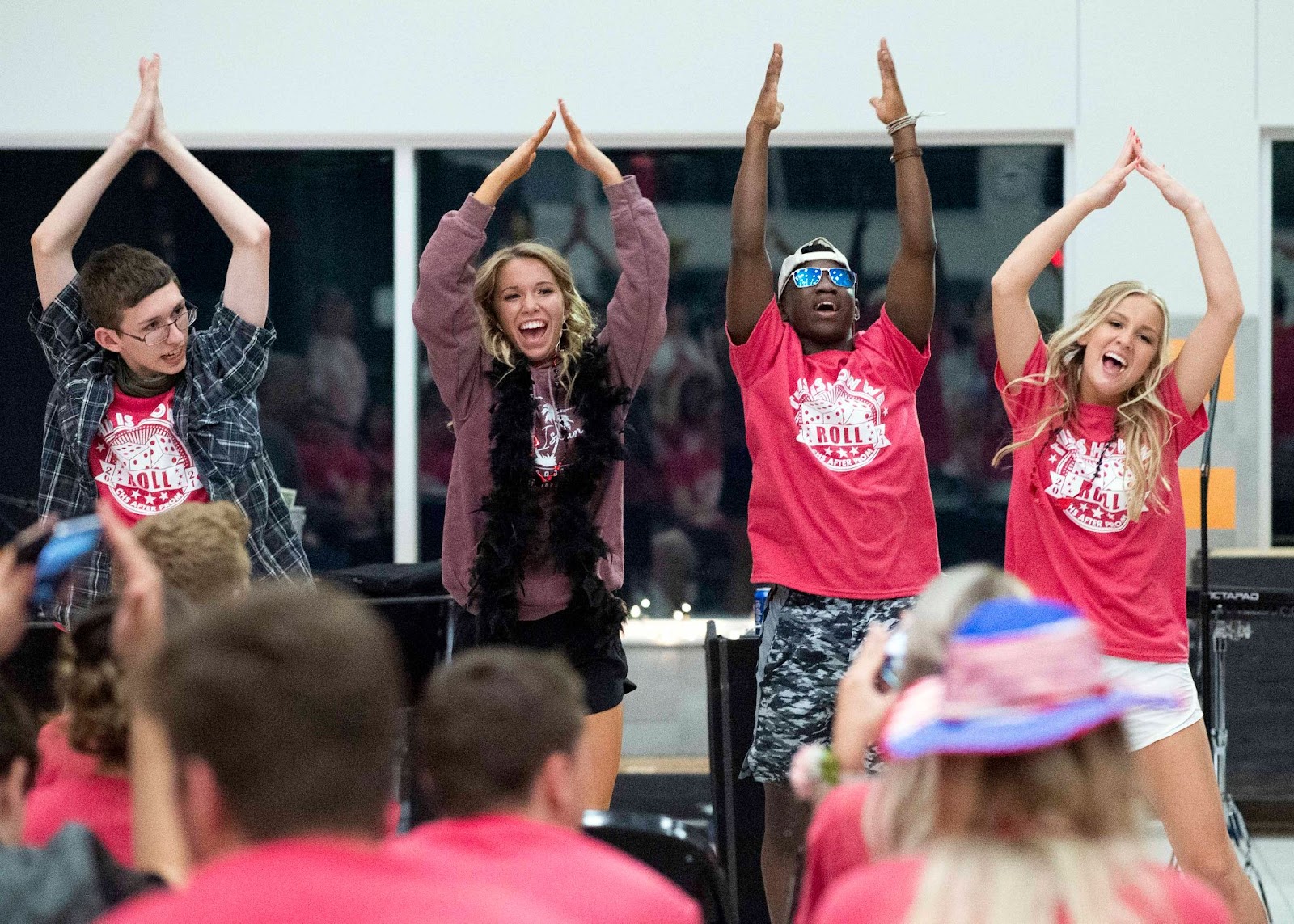 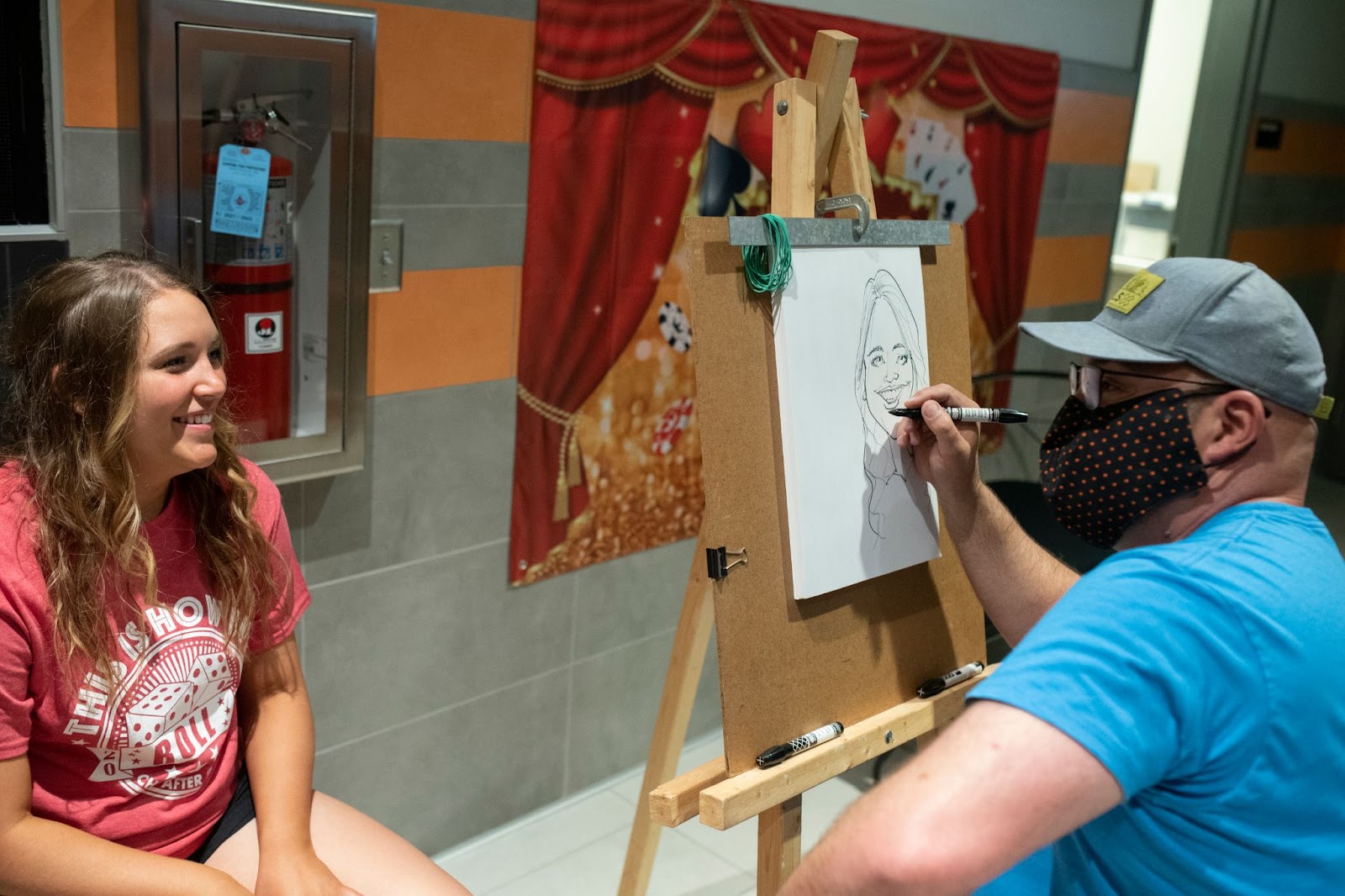 Zoe Porter gets a caricature of herself drawn by Scott Lassiter. 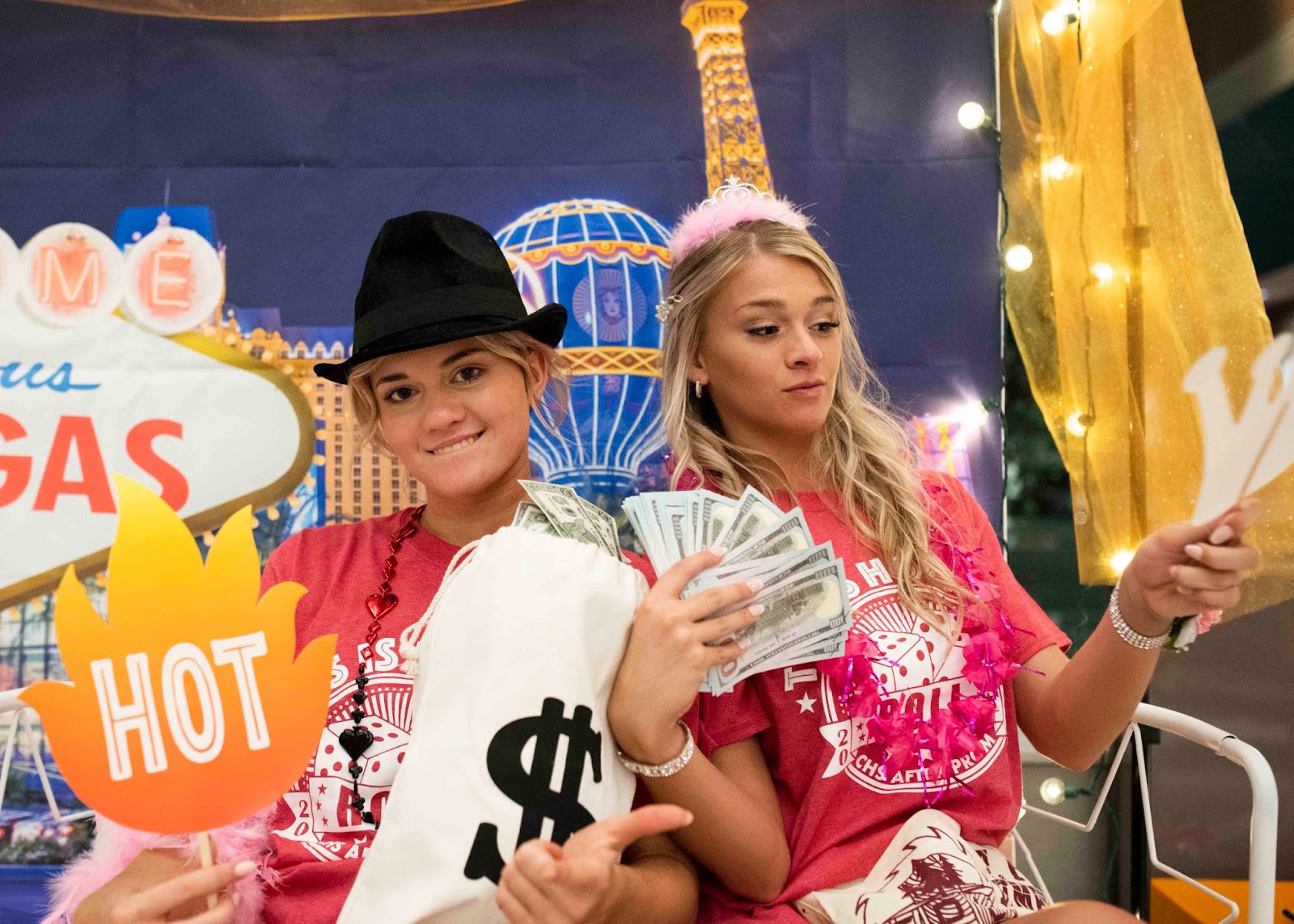 Emma Neubauer and Jordyn Klingel pose with some of the casino props. 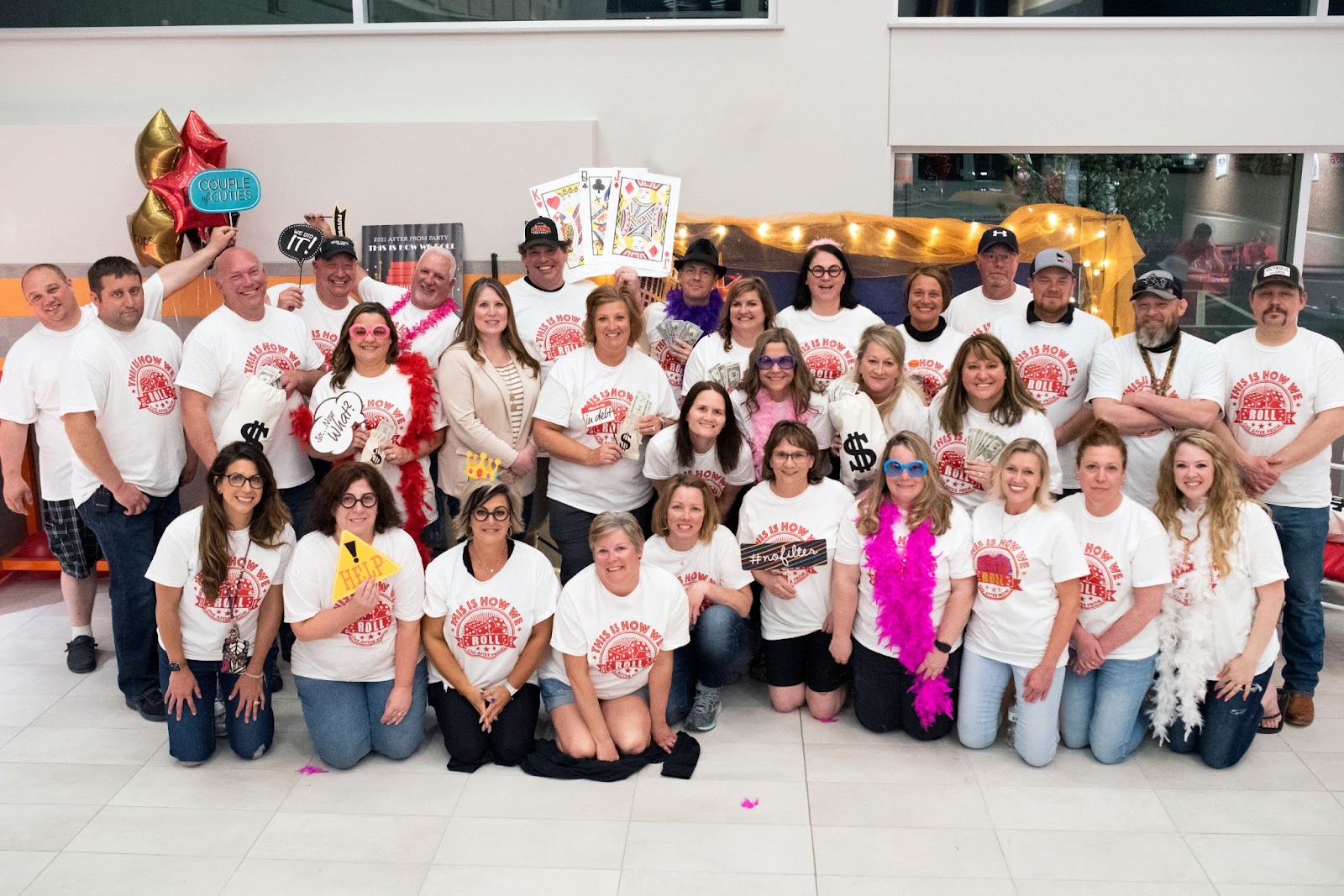 It took an army of junior parents to prepare the after-prom party and make sure it went off without a hitch.