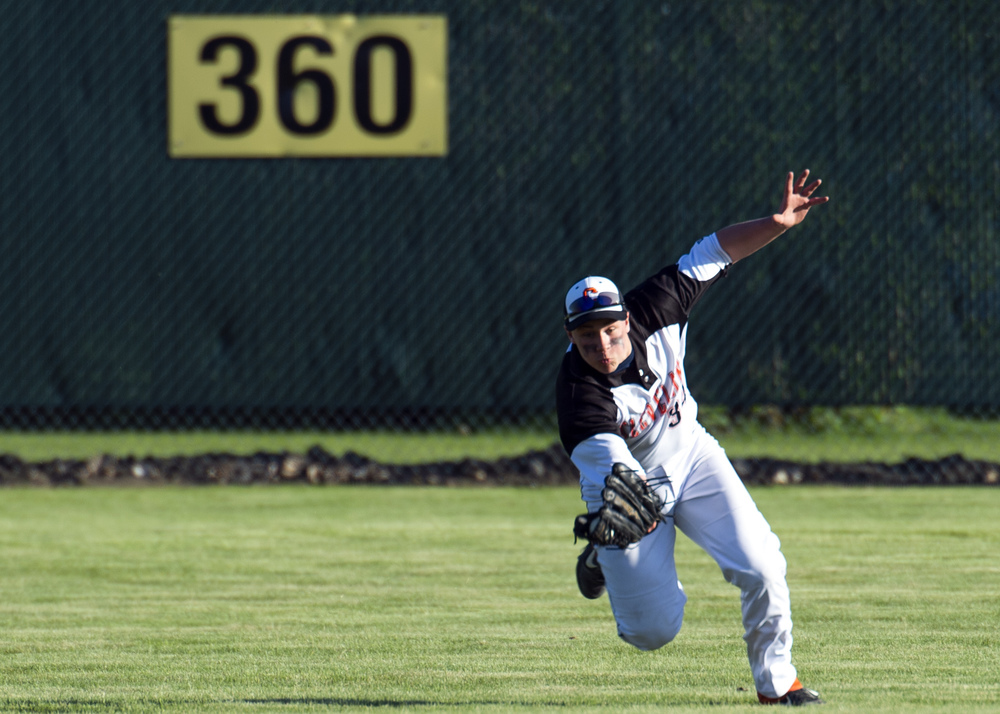 Above: Right fielder Tanyon Hojeisel made a nice running grab and  then tossed the ball to second to catch the Mountain Lake runner for a double play in the seventh.

Four games in five days all went in the varsity baseball Clippers’ favor after a 9-4 road win at Janesville on Thursday followed by a 15-5 victory over visiting non-conference Mountain Lake on Friday.

“If anyone would have told me we would win all four games, I would have told them they were nuts,” said head coach Mike Krenik, “but we hung in there and played disciplined.  A lot of them stepped up to the plate and had some great plays.”

Five-inning wins with Colin Krenik going the distance in both were the bookends to the week.

Krenik permitted eight hits and four walks while striking out four against Mountain Lake. Perfect defense surrounding him gave him the confidence he needed to limit the damage.

“I was trying to paint the corners,” said the junior. “Usually my fastball tails, and they mostly swing and miss at that, but my defense did a real good job.”

“He’s got to learn to use location and to learn to use his curve ball a little bit better, but he did a very good job,” Krenik said. “He threw strikes. After playing all these games and knowing how good your defense is behind you, it’s hard not to throw strikes.”

Meanwhile, the Clippers took advantage of five errors, 10 walks and eight hits, all singles. Jackson Meyer and Alex McCabe each had two hits while Kaleb Timlin, Elijah Sullivan, Carter Dylla, and Krenik all had one hit.

In the first, Carter Dylla walked, and Sullivan got hit by a pitch. After McCabe singled to load the bases, Dylla scored when Gabe Sullivan walked. Elijah Sullivan scored on a  Meyer single, and McCabe scored on a Timlin single.

In the second, Lucas Walechka walked, reached second on a McCabe single, moved to third on a Gabe Sullivan walk and scored on a passed ball to put the Clippers up 5-1.

On a pair of errors and hits by Dylla and Elijah Sullivan and a Walechka RBI groundout, Timlin and Tanyon Hoheisel scored in the third to put the Clippers up 7-3. On walks and errors and singles off the bats of Walechka and Krenik, the Clippers scored eight runs in the fourth.

“They were young, but they played a lot better than I expected them to,” coach Krenik said. “There were not a lot of weak arms. It was mental mistakes more than anything else. They’ll be good in a few years after they go through the learning process.”

At Janesville, the Clippers jumped out to a 1-0 lead in the top of the first when Elijah Sullivan walked, stole second and scored on an error.

In the third, Krenik walked, advanced to second on a Meyer single and scored when Dylla hit into a fielder’s choice. Sullivan swatted a hit to left field to bring Meyer and Dylla home and scored on a Walechka single to put the Clippers in front 5-0.

“They hit the ball well,” Krenik said. “It was a pretty slow gunner that they had to sit back and be patient for to hit.”

The Clippers took advantage of free tickets to post three more runs in the fourth. Meyer led off with a walk, and Dylla reached first on a fielder’s choice. Sullivan and Walechka walked too.  McCabe’s single scored Dylla and Sullivan, and Walechka scored on a passed ball. Gabe Sullivan and Timlin walked too. The Clippers left the bases loaded but were up comfortably 8-1.

JWP scored a run in the third on a double and a single and three more in the fourth after a walk, a single an error and a passed ball.

The Clippers put the finishing touches on the triumph in the seventh when Timlin walked in the sixth, stole second and scored on a Hoheisel double.

Before he reached his pitch count after five and two-thirds innings, Walechka gave up six hits and walked four. He whiffed seven. Closer Hoheisel allowed now hits or walks and fanned one.

It was Hoheisel’s first stint on the mound in a varsity game.

“He threw strikes like he was told and slammed the door,” Krenik said.

The Clippers struck out four times. Both teams had six hits. Helping his campaign, Walechka hit a double and a single. Elijah Sullivan and Hoheisel each had a double. Jackson Meyer and Alex McCabe each had a single.

The Clippers had two errors, one more than JWP.

“I told everybody you can’t take them for granted,” Krenik said. “We might have an awful day, and they might have the best day of their lives.” 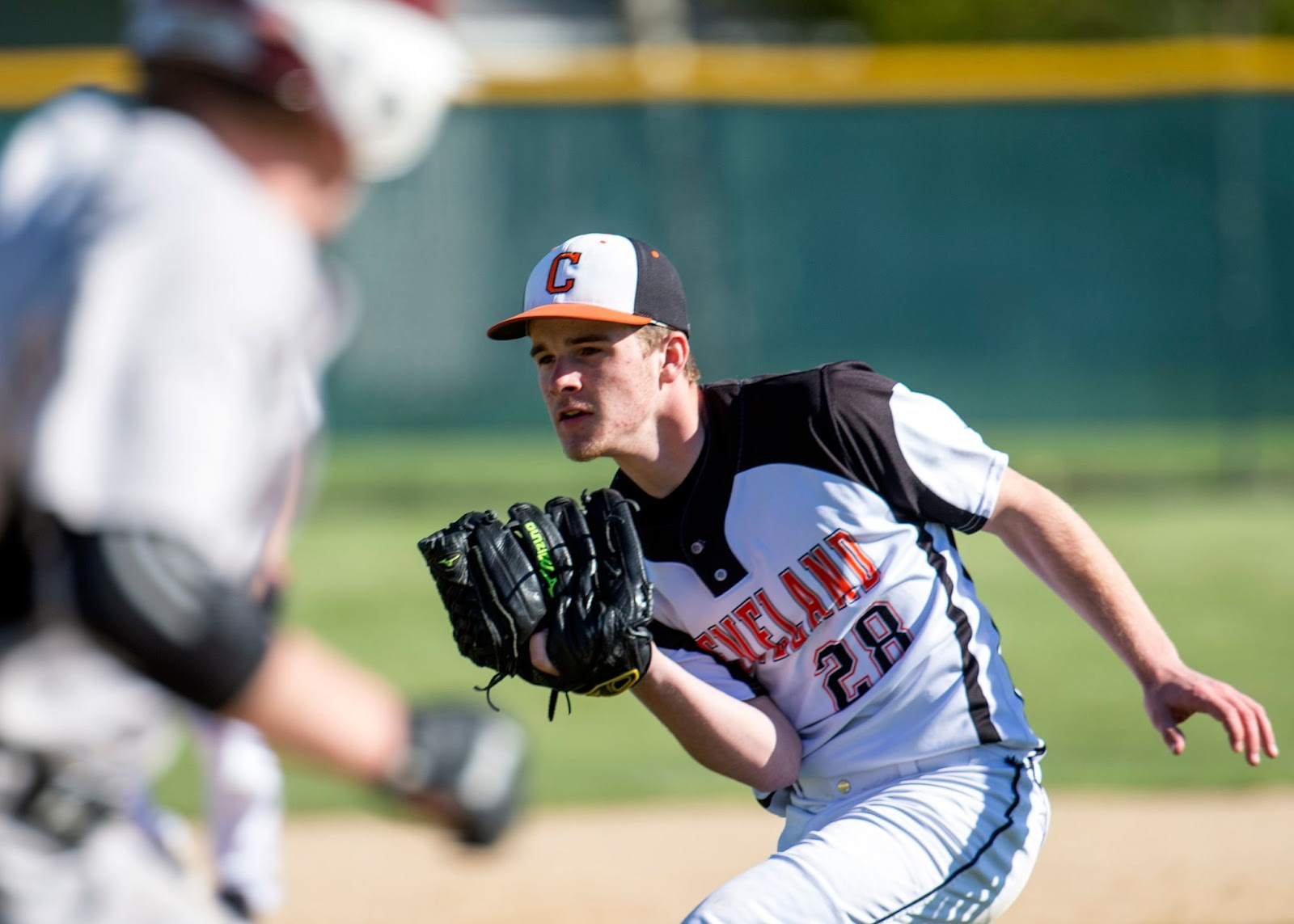 Colin Krenik cleanly fielded a number of popups and grounders to help his cause against Mountain Lake.