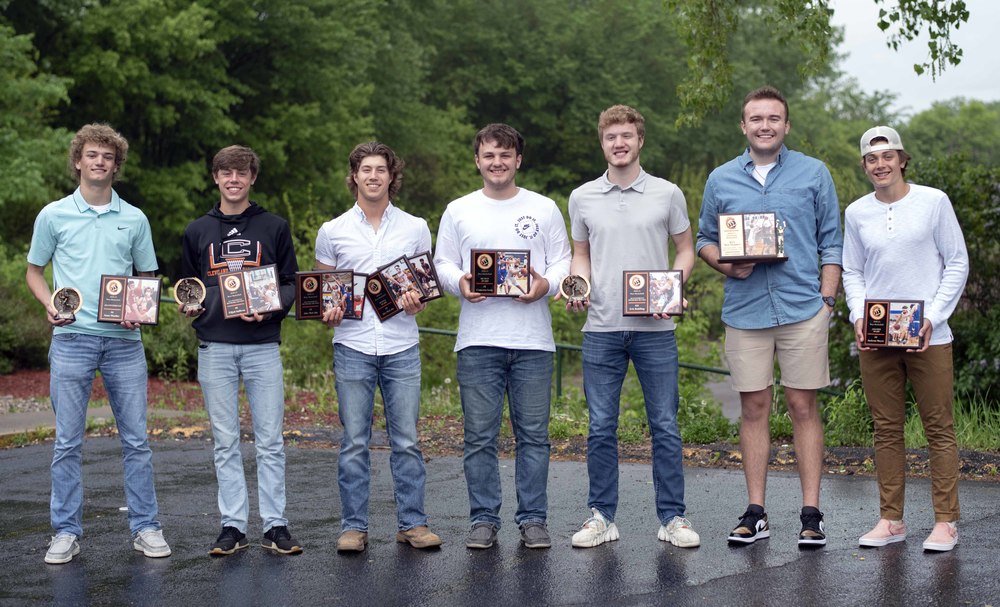 For the first time in known Clipper boys basketball history, all five starters were recognized with Valley Conference honors.

Chosen by conference coaches to be members of the Valley All-Conference Team were Ben Holden and Isaac Mueller. Elijah Sullivan, Eric Rohlfing and Alex McCabe were All-Conference Honorable Mentions.

The senior quintet and their teammates were honored at an awards banquet on May 19, held at Neisen’s Riverside restaurant, just east of St. Peter.

“It just shows how respected our team was,” said head coach Dan Fredrickson, who presided over the event. “Never have we walked out with even two honorable mentions.”

Voted by his teammates as the Most Valuable Player was Holden. As he has for the last three seasons, he led the Clippers in free throw percentage and field goal percentage. He also paced the team in rebounds (244) and points (318). He had the most blocks (32).

Holden finished his career with 1491 points and 1014 rebounds.

“He just had a  monster of a career,” said Fredrickson. “We wish him the best as he goes on to compete at the next level.”

His teammates chose Mueller as the Offensive Player of the Year. He had the most assists (64).

“The leap Isaac made this year was incredible,” Fredrickson said. “He has been an exceptional player since he stepped on the floor as a freshman, but this year he took another leap forward and to me he was the best guard night in and night out in our league. Just his ability to finish at the rim and how creative he became as a player. He really stepped up huge this season.”

The Hustle Award went to McCabe as did the Mr. 95 Award.

The latter was an prize that was new last year and presented to the player who contributes in a manner that does not show up on stat sheets but always has an impact on a game (the 95 percent), like helping on defense, making the extra pass on offense, being a good teammate, hustle stats and batted balls, Fredrickson said.

“He plays just like the titles say. He had an awesome season this year.”

McCabe was also voted as the Defensive Player of the Year.

Fredrickson said that multiple players got votes for the Hustle Award and the Defensive Player of the Year Award, which is indicative of what they thought of each other: that they were all working their hardest...all of the time.

Practice Player of the Year, chosen by the coaching staff, was Sullivan.

“If you came to watch us in practice…he was just playing hard and doing things all the right way,” Fredrickson said.

“This is a monster number per game,” Fredrickson said.

For his efforts, Sullivan was picked by his teammates as the Most Improved Player.

“He really became a competitor big time in a lot of games,” Fredrickson said.

“He comes off the bench, provides hustle, provides rebounding, works hard in practice…he did a nice job for us,” Fredrickson said.

“He is a player that we expect big things come going forward. He always comes to practice with a smile on his face. He’s a player who accepts every role we give him and really busts his tail.”

“I felt like he was really deserving,” Fredrickson said. “He really cheered the team on and took stats and also was a senior playing freshman basketball for Curt (C-Squad coach Curt Buhl). He had a sweet bucket on varsity down in Alden.”

With a GPA of 3.5 or higher during the season, Elijah Sullivan, McCabe, Mueller, Rohlfing and Holden earned All-Conference Academic awards.

“It was a very nice season...an excellent season,” Fredrickson said. “It’s hard to quantify in a COVID year, but in most seasons, this would have been a 25-win team, so they should be celebrated like that. It was an exceptional team.”

But the Clippers were one of three teams that had to suspend their season due to COVID protocol. At that point, the Clippers were tied first in the East Division and had beaten everyone on the other side, Fredrickson said, and they held all the tiebreakers up to then, so they would have faced Truman/Martin Luther/GHEC, a team they had beaten already, for the championship.

“No doubt in my mind, had the season played out, you guys would have been the conference champions,” Fredrickson said.

The Clippers gave up an average of 54.9 points per game, the second best in the section, a point behind New Ulm Cathedral, a team that plays much slower than Cleveland, Fredrickson said.

“Our kids were so good defensively for the majority of the season, and we don’t play slow basketball. We play quick, we are up and down, we try to get out on transition and shoot quick shots. That makes that number even more impressive.”

The Clippers’ 11.5-point differential was fourth best among Clipper teams that Fredrickson could find stats for in Cleveland basketball history book. He said beating subsection top seed Mayer Lutheran on its own court in the section quarter finals was the pinnacle of the season.

“It was a fun group to coach. I was excited to have a season. I felt like we had all the pieces to go a little further than we did. The guys played together, played team basketball and shared the basketball a lot, and it was a lot of fun.

Fredrickson said preparing for games each week was a large part of that fun.

“One of the things I enjoyed most was the practices. We had those playoffs wins, and it was a lot fun because we were getting one more practice. This is a fun group to have in practice because they’re loose. If they would play against some of the teams the way they play against each other in practice…they make each other better. I was proud to be your coach.”

Fredrickson that he missed what is typically an amazing fan base in the gym and sense of community but said the live stream added a new dimension with friends and family members being able to watch the games from around the country.

“It was a neat thing to connect people in those times.”

Rohlfing and Holden were named to the All-Conference team. Mueller was an honorable mention.

Fredrickson chose Baker and Elijah Sullivan as the Practice Players of the Year. The Coaches award went to both Baker and Luke Mueller. McCabe earned the Mr. 95 award.

Isaac Mueller dropped it the most three-point baskets for the Clippers (30). He also had the most assists (130). 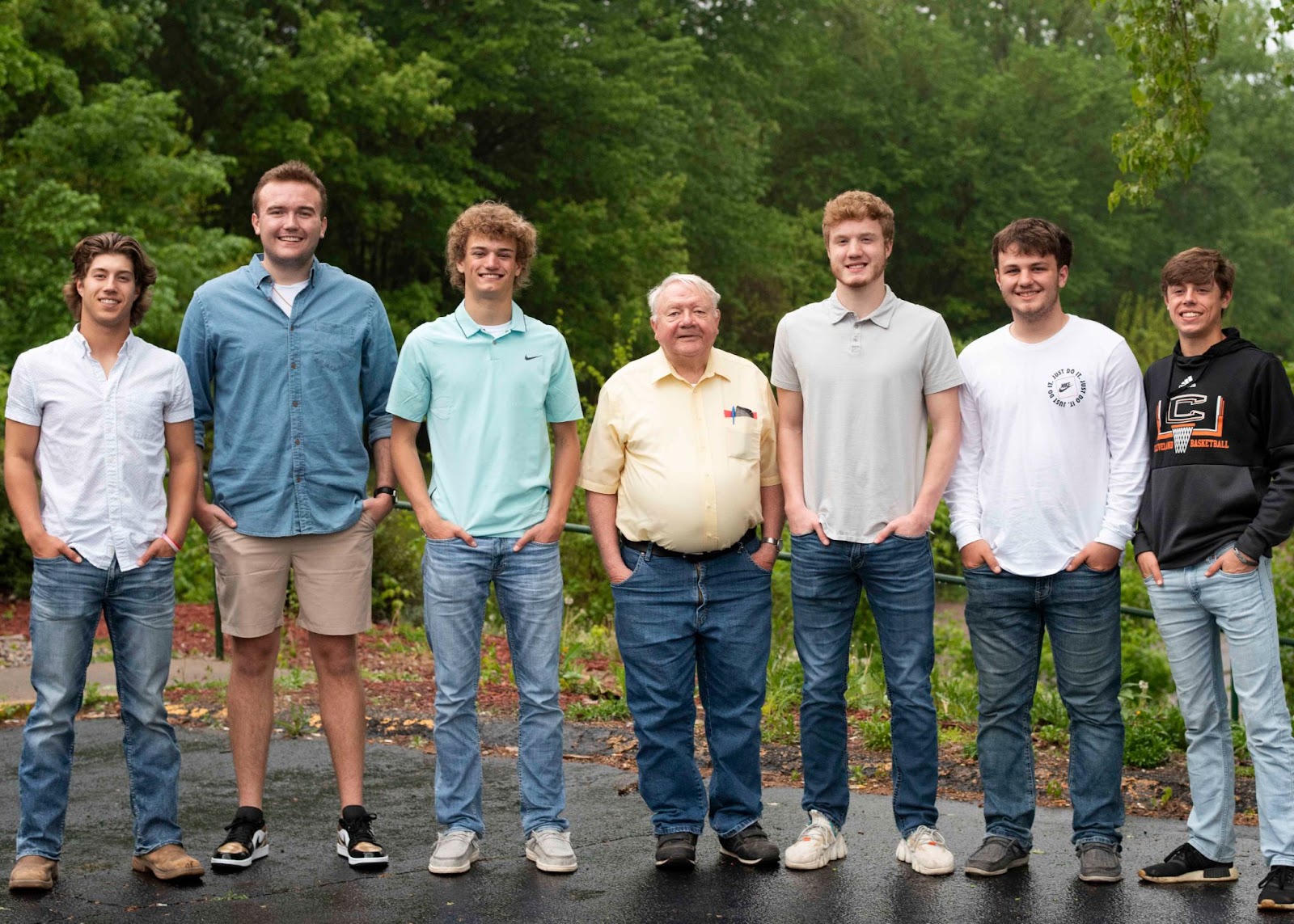 Greg Davis poses with the seniors. 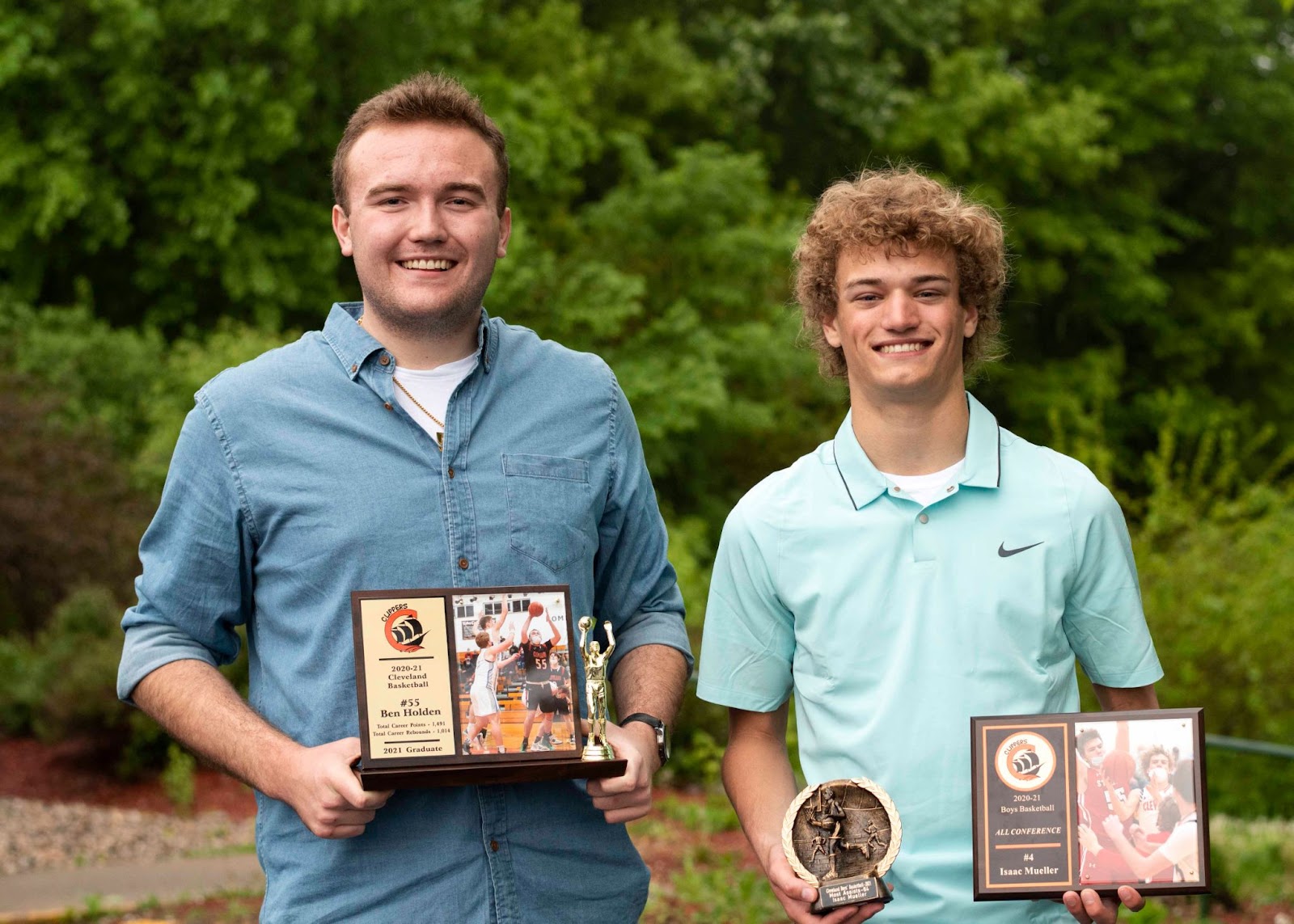 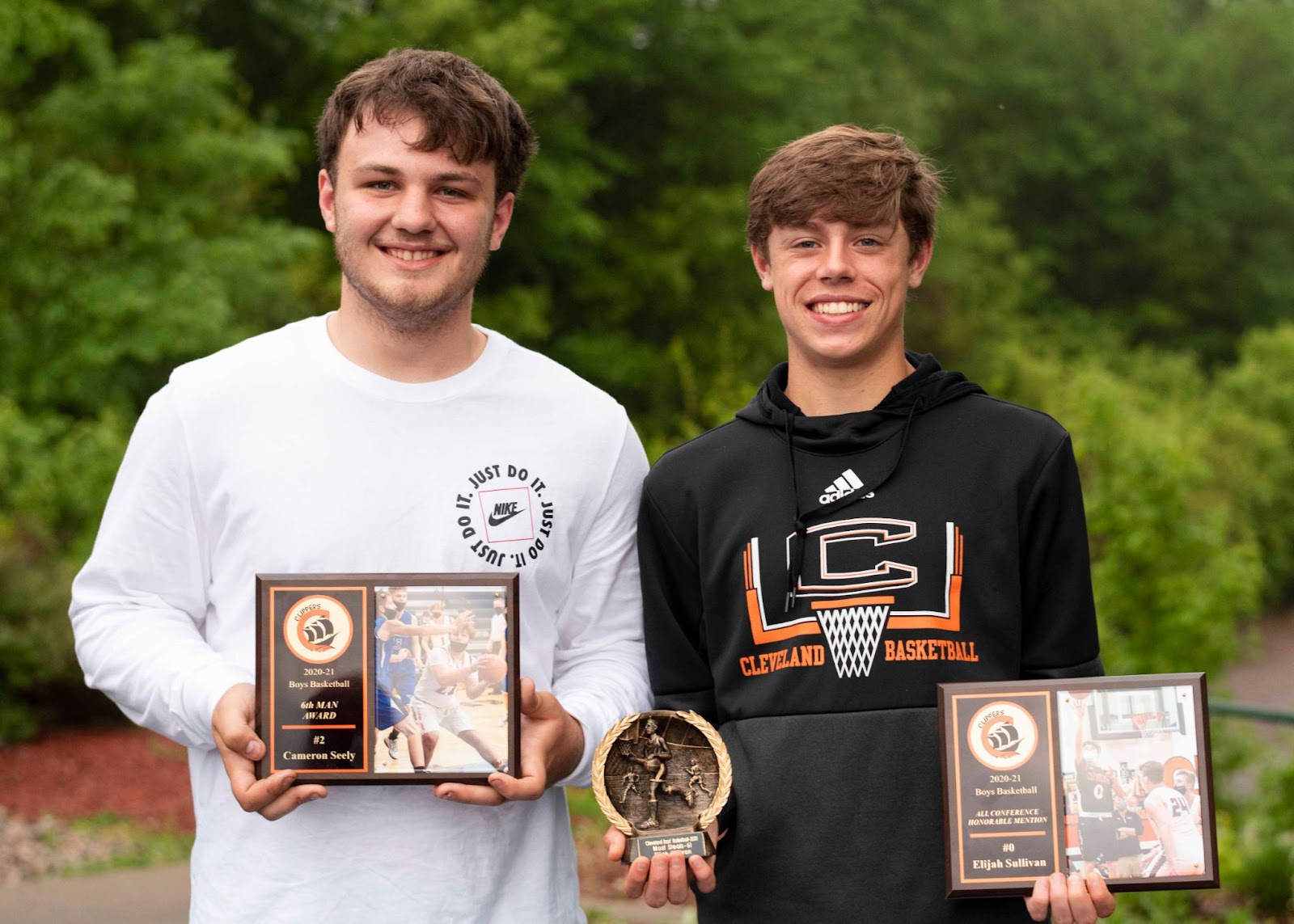