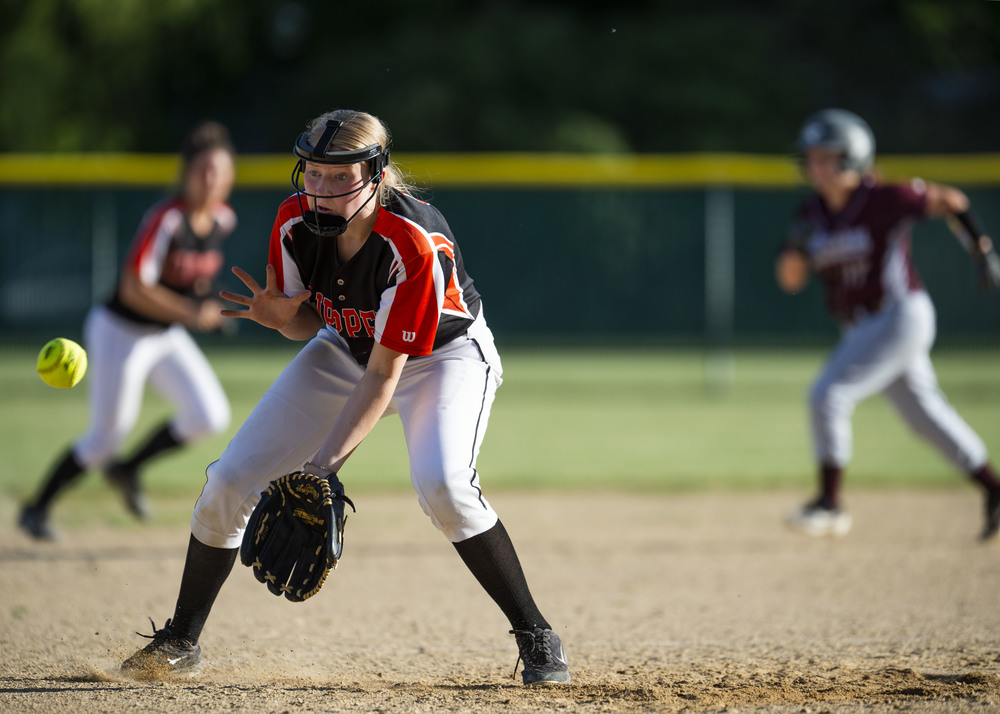 The Mountain Lake Area girls put up more of a fight against the host Clippers than when they fell 12-2 in Cleveland back on May 7, but the Clippers beat the Wolverines 10-5 on Tuesday to advance in the section 2A tournament.

“We just didn’t get the big hits to break it through early and get that 10-run game,” said head coach Dan Fredrickson.

The Clippers travel to Nicollet today (Thursday) for the third game against the Raiders this season. They lost the first two.

Sierra Davis (fielding a comebacker above) stayed in the circle for all seven innings for the win.

Nicole McCabe cracked a hit to deep center field and slid into second for a double in the bottom of the first and scored when Emily Kern followed up with her fourth home run of the season.

Without hitting the ball out of the infield, the Wolverines scratched two runs in the top of the third on a walk, an error on a bunt, a bunt hit, a sac bunt for an RBI and a ground out RBI to knot the game 2-2.

The Clippers, who had 32 hits over the previous two games coming in, left the bases loaded in the second but managed to post the run they needed to regain the lead in the bottom of the third. Grayce Kortuem led off with a walk, stole second and scored on an overthrow at first.

The Wolverines posted a run in the fifth after a double, a grounder out and a fielder’s choice to tie the game 3-3, but the Clipper opened the game up in the bottom of the same inning with five runs.

After Halle McCabe led off with a walk, Kortuem doubled and Taylin Gosch walked to load the bases. Kaylee Karles hit into a fielder’s choice with McCabe out at the plate. Macey Ziebarth and Brianna Connor each walked for an RBI before Nicole McCabe singled for a pair of RBIs. With Connor crossing the plate on a passed ball, the Clippers were suddenly in front 8-3.

The Clippers added two insurance runs in the sixth. Kortuem walked and moved around the base paths on passed balls for one run. Harley Connor hit an infield single, moved to second on a stray pitch, advanced to third on a Karels infield single and stole home when the Wolverines tossed out Karels trying to steal second.

On a couple of errors and a base hit, the Wolverines  posted two runs in the seventh, but the game ended when Brianna Connor snared a line drive for the final out.

Davis struck out two, walked one and beaned two. The Clippers committed six errors. MLA rotated two pitchers, each taking the circle twice. The Clippers had faced the one who was second and last.

While the MLA game was for elimination, the Clippers are now guaranteed two more games and will play at Caswell Park in North Mankato on Saturday at 10 am. 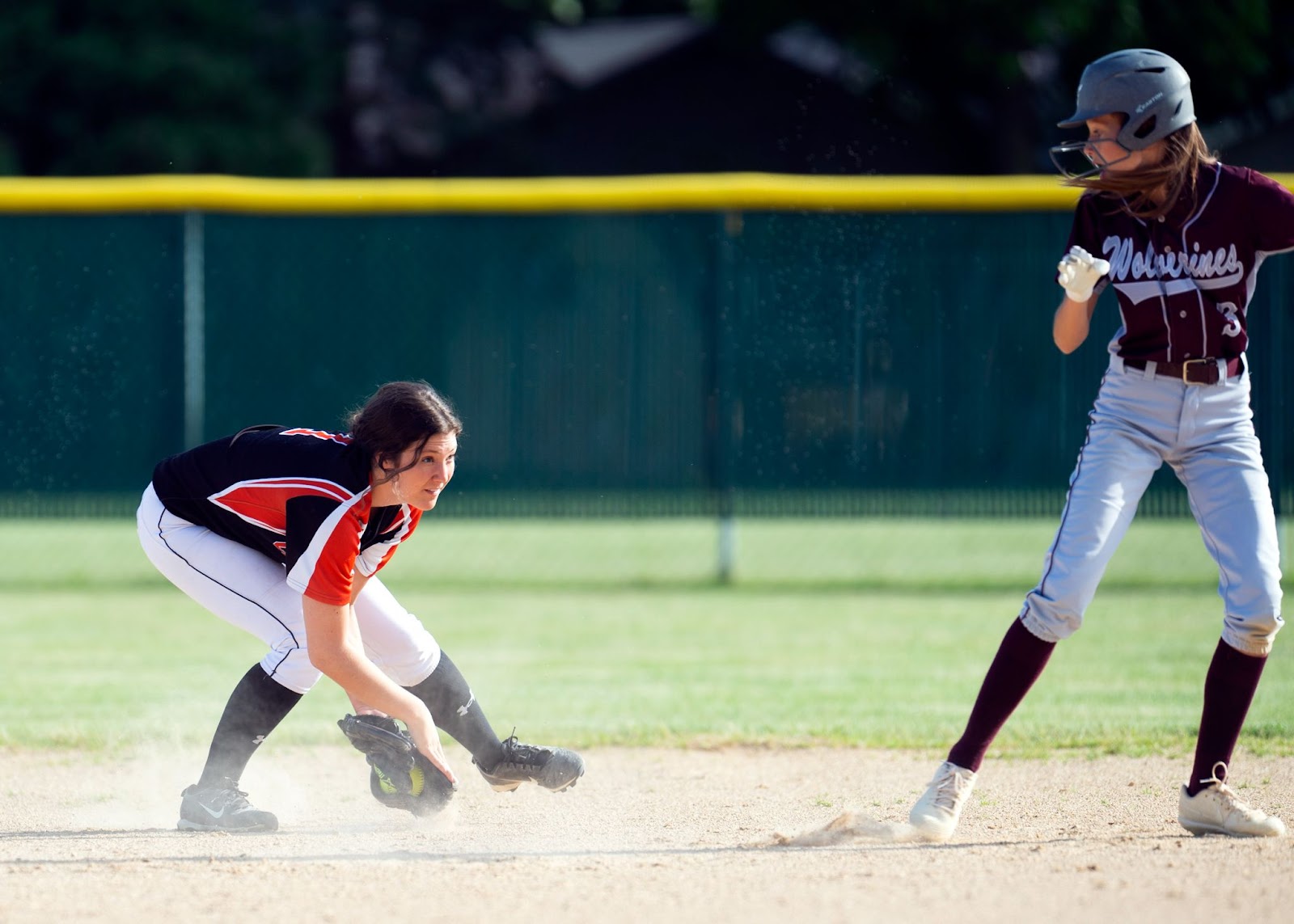 Shortstop Halle McCabe fields a grounder while a runner heads back to second. 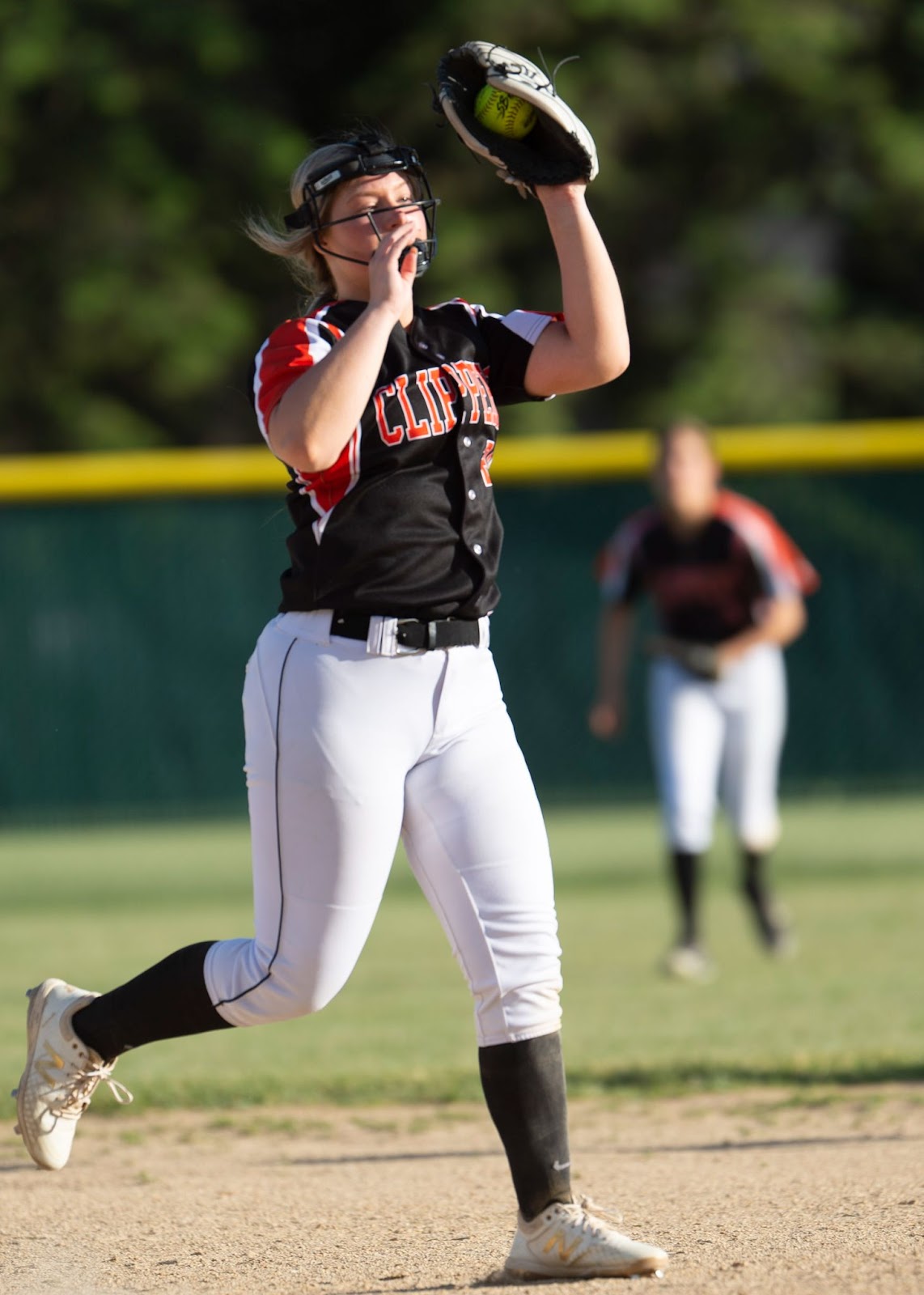 Brianna Connor speared a couple of line drives at third, including one for the final out