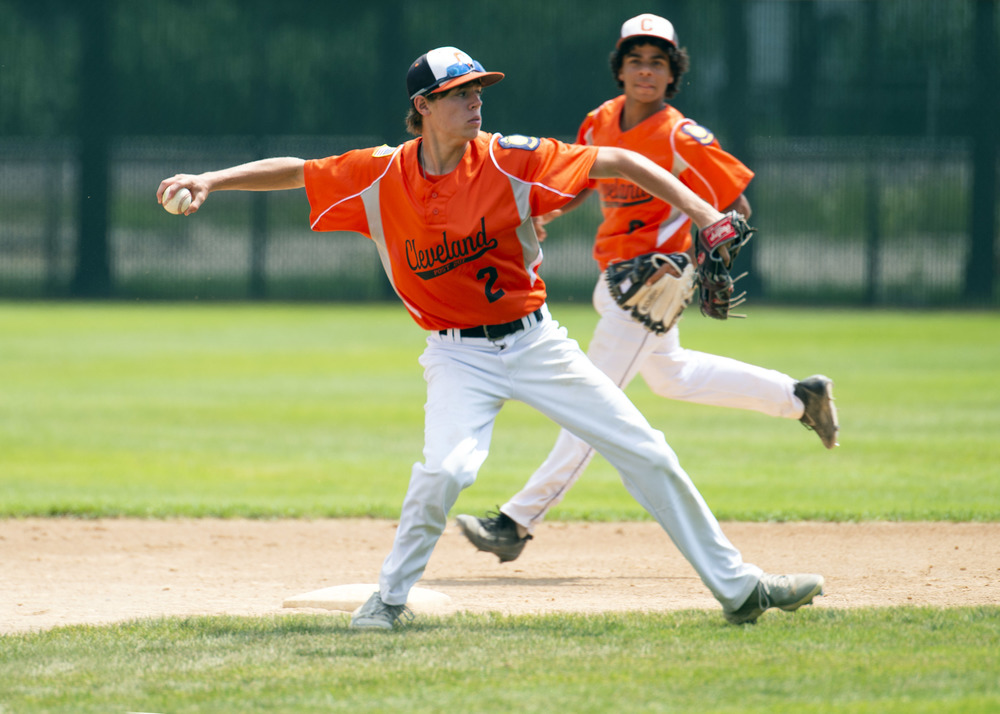 Above, shortstop Elijah Sullivan makes a putout throw to first. Sullivan is the only 2021 senior who played in the tournament but was still only 17 at the time.

The first ever season for the Cleveland Legion Post 207 baseball team (U19) came to an end on Sunday in Arlington with a 5-2 loss to Cannon Falls in the third round of the sub state tournament.

The Clippers had only one error but were outhit by the Cardinals 10-5.

“The one thing I said when coming into this game was ‘our defense is going to play great,’ which it always does,” said head coach Alec Rogers. “But the one thing we really need to get going early is our hitting. We were kind of lacking in that department. We left too many guys on base, and when we needed the big hit, we were lacking.”

The Clippers, who split with Cannon Falls in the regular season, were coming off a 4-1 loss to Randolph and a 15-4 win over Goodhue the day before. Both games were on the Green Isle field.

The Cardinals rallied with six hits in the bottom of the third for four runs. The Clippers limited the damage when catcher Jackson Meyer feigned a throw to second on a steal and then whipped the ball to Carter Zimmerman (from Mankato Loyola) at third to catch the runner there off base.

But Cannon Falls added another run in the fourth on two hits and an infield throwing error, the only miscue the Clippers had.

The Clippers’ first run finally came in the fifth. Carter Dylla beat out an infield single, advanced to third on an Elijah Sullivan hit and scored on a catcher overthrow.

Lucas Walechka led off the sixth with a double, moved to third on a Colin Krenik ground out and scored when the Cardinal infield mishandled a Meyer grounder.

The Clippers whiffed seven times, all but two watching.

“These guys fight,” Rogers said. “They’re looking. Sometimes they can be a little picky, but that’s just a part of the game. We just need to learn from our mistakes and jump on the pitcher early, and great things will happen after that.”

Tanyon Hoheisel hit an infield single in the third, and Kaleb Timlin dropped a single down the right-field line in the sixth to account for the rest of the Clippers’ five hits.

With three runs in the first and five in the second, the Clippers, in a must-win game to continue, took a commanding lead early. Both teams scored two runs in the third and one run in the fourth. Goodhue added a run in the fifth.

The game ended in the sixth when Ethan Fuller doubled on a line drive to center field to score Walechka, Meyer and Jack Voit, who had walked. Earlier in the inning, Zimmerman reached first on an error and scored when Meyer hit into a fielder’s choice.

“We got the bats going early,” Rogers said. “We put the ball in play, and our defense was great.”

The Clippers tallied 11 hits. Walechka led the effort with three hits in four at bats. Fuller had a double and a single. Meyer had two singles. Dylla, Sullivan, Krenik and Zimmerman each hit a single.

The Clippers were errorless while Goodhue committed three errors.

On two singles, a walk and a hit batter, Randolph scored two runs in the first and never looked back.

“It came down to a few close plays, and we played neck-to-neck with them,” Rogers said.

The Clippers’ lone run came in the fourth. Zimmerman reached on an error, advanced on a Walechka walk, stole third and scored on a fielder’s choice.

Walechka took the loss. In five innings and facing the first batter in the sixth, he allowed eight hits and four runs while striking out three. Zimmerman took over after that and got the next three batters to ground or pop out.

Meyer led the Clippers with two hits in three at bats. Dylla, Sullivan and Hoheisel also had hits.

“Our defense was great,” Rogers said, “but in a tournament like this it’s small ball. That’s the way the game goes sometimes.”

While in the past, if a Cleveland player over 15 wanted to play summer ball, he had to find a team in another town, so Rogers was grateful he and assistant Nick Dylla could bring together a Cleveland team.

“The importance of it is getting our players playing during the summer. If you look at it now, our guys are playing almost to the first of August. If you looked at it last year (when there wasn’t a school season), a lot of guys played town ball, but they weren’t getting the amount of reps we’re getting now. Now we’re getting game reps all the way past June."

Rogers said that the time put in will help the Clippers in all facets of their game.

“I think that’s a big benefit for us because our pitchers get on the mound for extra time, our hitters get to see more balls, our fielding gets to improve…so many great things that can happen during summer that transition to school ball. It makes us a better team and better players."

The Clippers end their season with a 4-11 record. 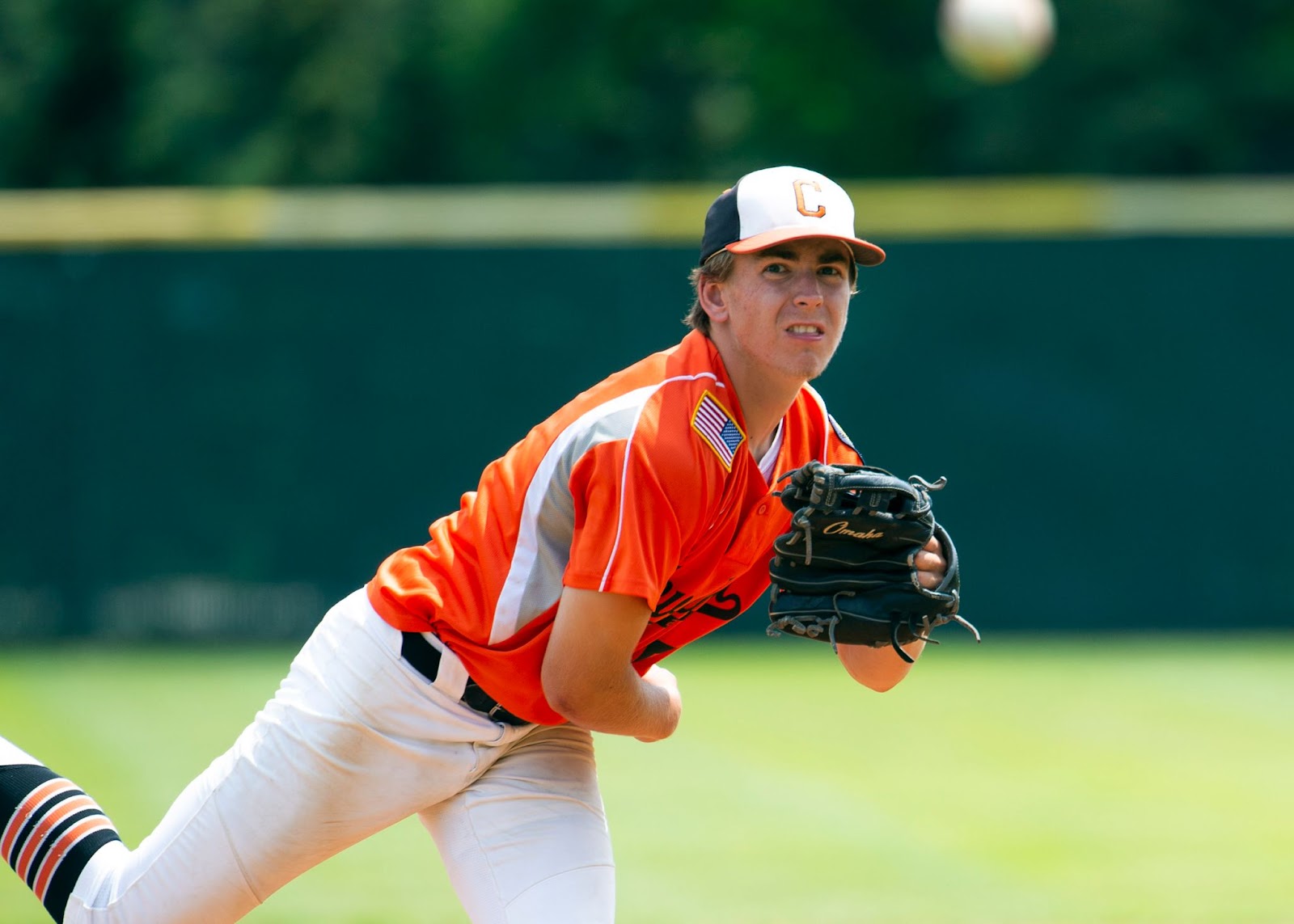 Carter Dylla was the starter against Goodhue on Saturday and again on Sunday against Cannon Falls. 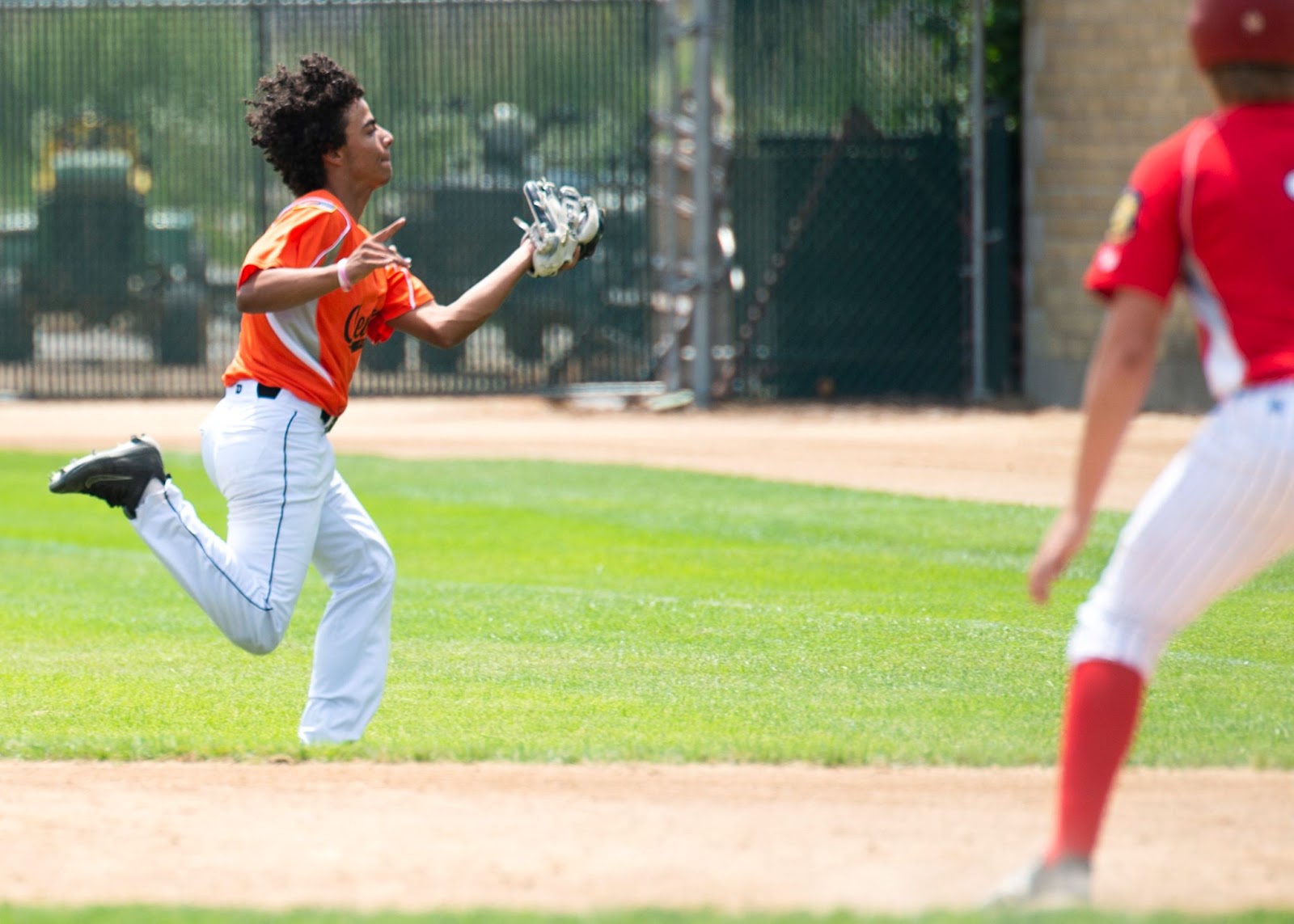 Second baseman Kaleb Timlin made a nice running grab in the second against Cannon Falls. 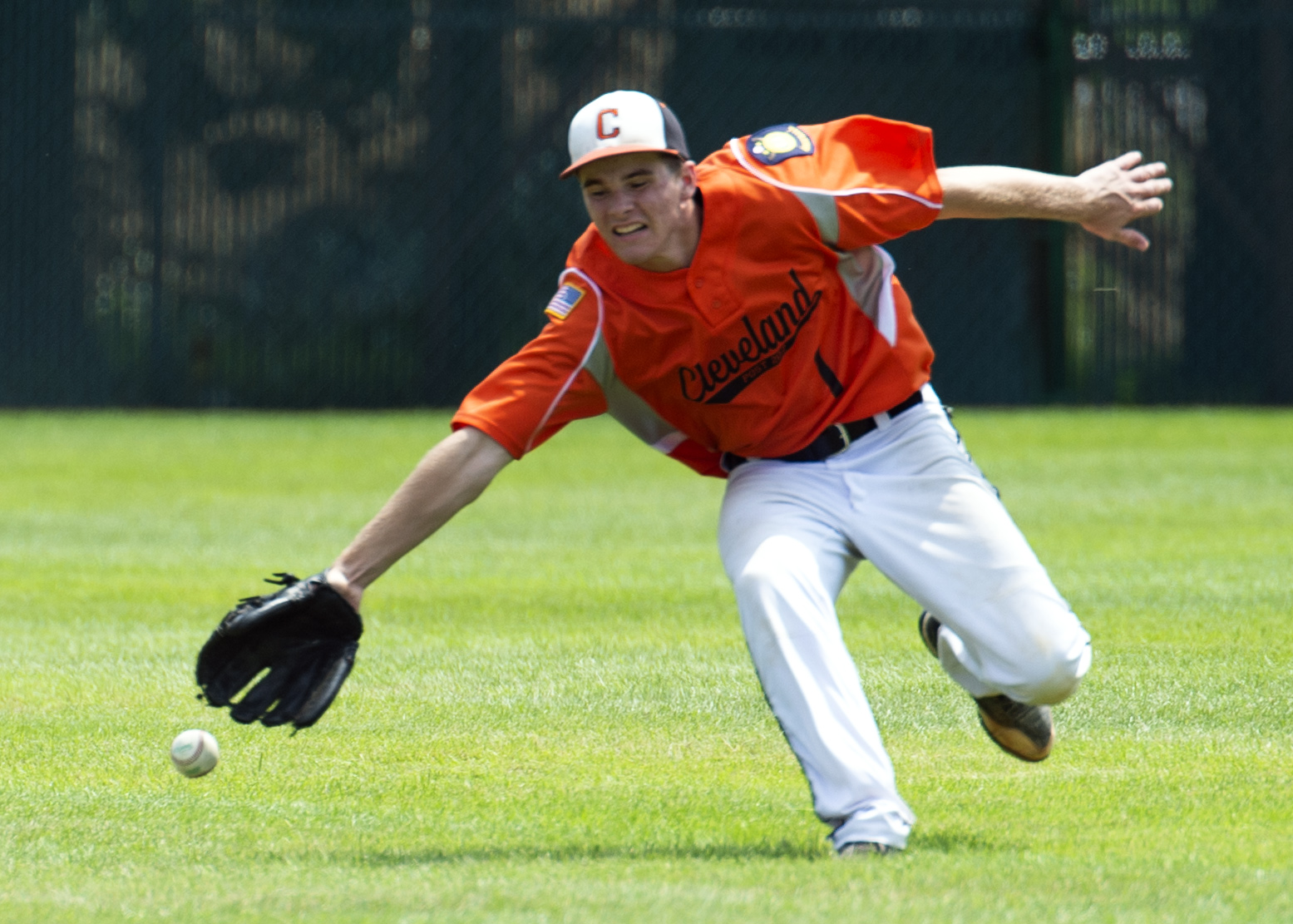 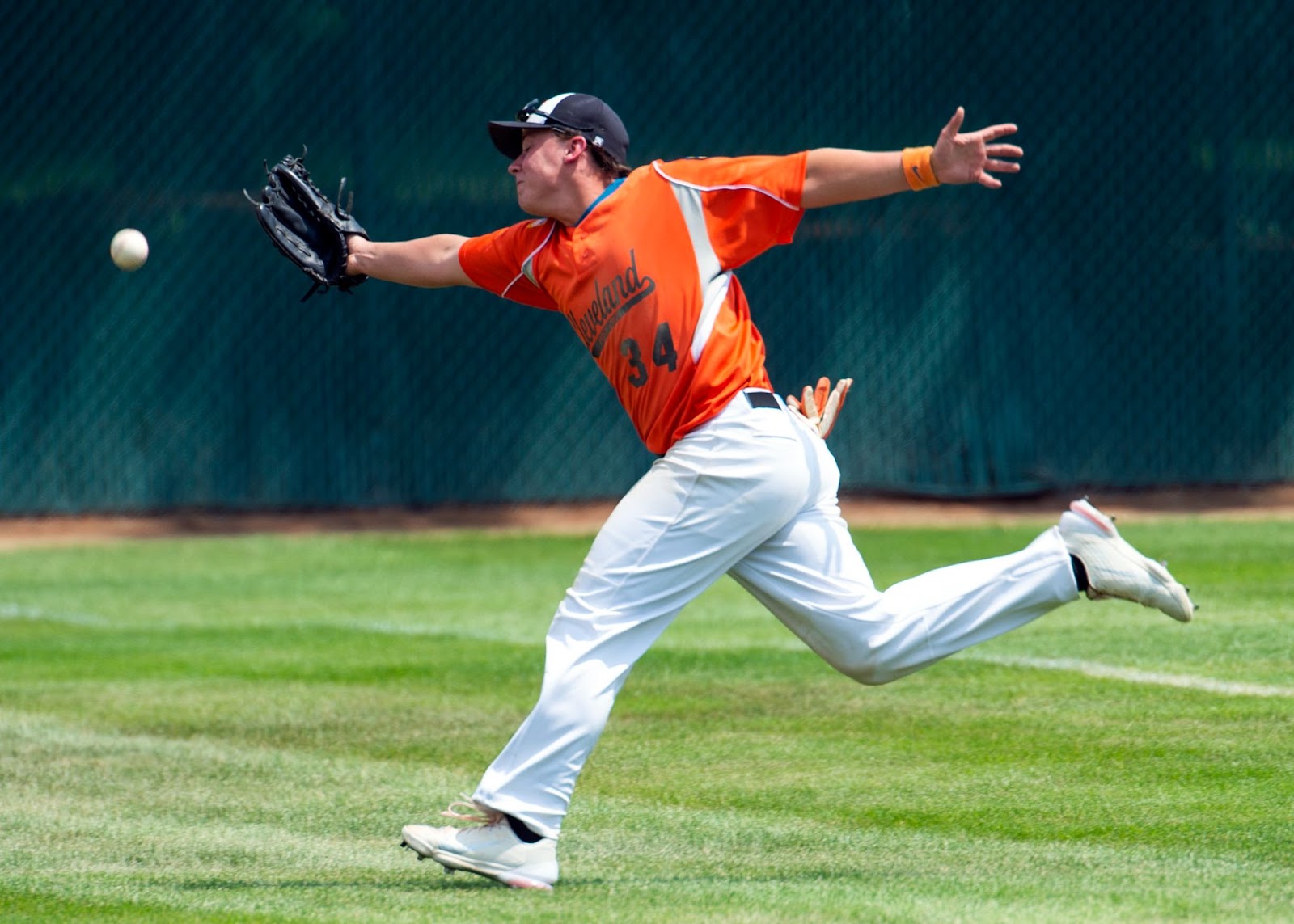 Left fielder Tanyon Hoheisel has good speed, but this Cannon Falls hit was just out of reach. 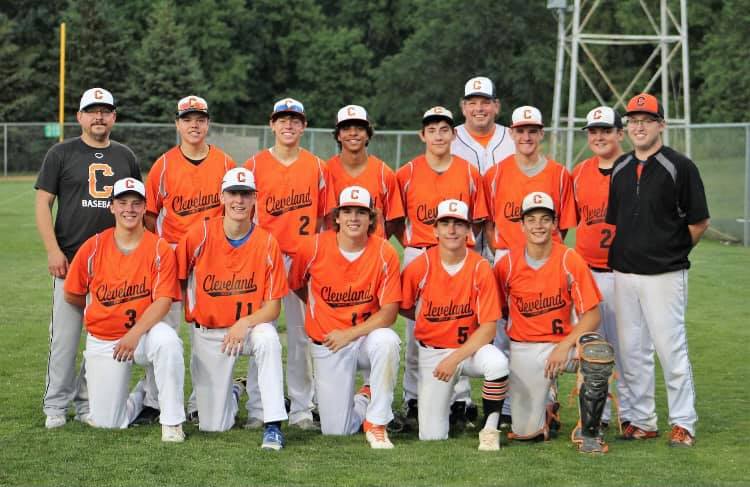