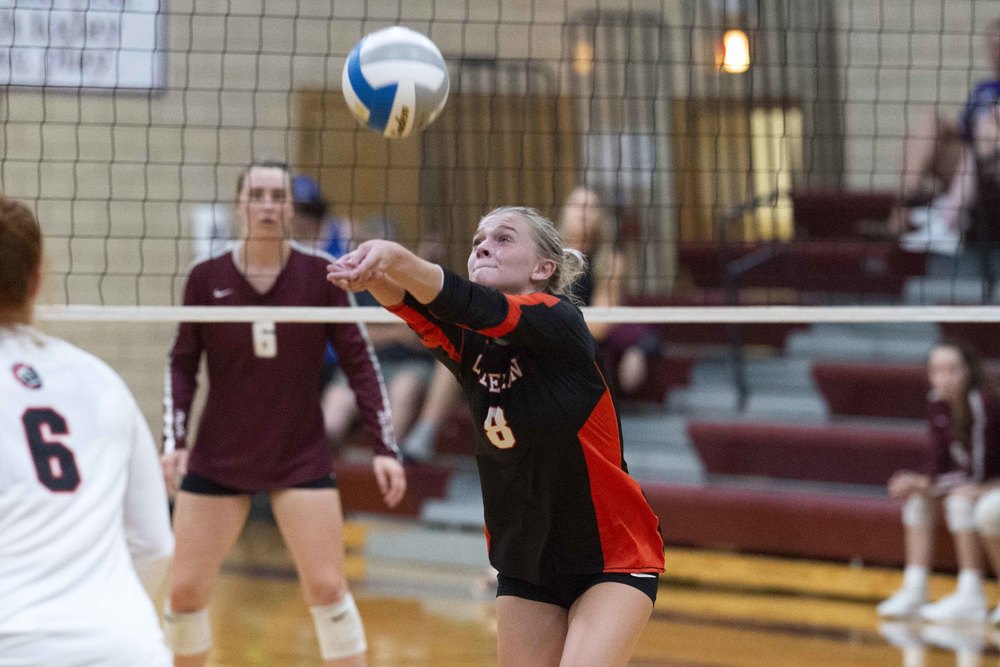 Above: Jordyn Klingel makes a two-handed bump. With usual setter Taylin Gosch out for a few games, Klingel took over the setting role.

With the exception of last year—when there were no non-conference games—since 2008, Cleveland’s first volleyball match of the season has been against New Ulm Cathedral.

Carrying momentum into the rubber game with a victory in game four on Thursday, it looked like the host Greyhounds would pull ahead in the series 7-6, but the Clippers won the short match 15-12.

Head coach Bree Meyer said NUC has always been scrappy, especially at home, and so she wasn’t surprised the match went the distance.

“I kind of knew…we saw them in a summer tournament.”

Starting setter Jordyn Klingel only had a week to prepare for a role she hasn’t taken much in prior years, but the senior, who practiced as an outside hitter all summer, came through, Meyer said.

“I didn’t know what to expect tonight. For her to get into that setter’s position in a week was really huge for us.”

Down 4-2 in game 5, Emily Kern dropped down a kill, and the Clippers tied the game 4-4 after the Greyhound’s hit got caught in the net.

“We worked so hard in all these games, so the last game…we just had to win that,” Kern said. “We worked too hard to just lose.

The first game started with the Greyhounds sending a serve past the boundary line and ended in Cleveland’s favor 25-19 when senior hitter Maddy Steen hit into a vacant chunk of gym floor.

NUC tied game two 9-9 and then scored 16 of the next 21 points for a 25-14 triumph. The Greyhounds had seven winners in the run, and the game ended when the Clippers couldn’t make the set after a NUC hit.

“Sometimes we get down on ourselves and lose all of our energy,” Kern said, “but when we had our energy up, everything was perfectly fine.”

Game three featured runs by each team, but it ended 25-20 on a Kern kill.

Kern slapped down three-straight kills down the stretch, but NUC still led 22-15. The Greyhounds scored a point on an attack, and Kern spiked for another point before NUC scored on a kill and an out-of-bounds Clipper kill for a 25-16 win.

“Ava did really well,” Meyer said. “I was very impressed. She wasn’t afraid to touch the ball. I put Greta (sophomore Greta Hahn) in too, and she did a great job.”

Steen and Klingel each had two kills. Klingel passed for 23 assists. Kortuem posted up four blocks and ratcheted down one kill. Emma Sweere scooped 18 digs. Laci Hollerich had five digs and was nine for nine from the serving stripe. Zoe Porter had six digs and a pair of service aces.

The Clippers return to action on Tuesday with a home game against Janesville-Waldorf-Pemberton. 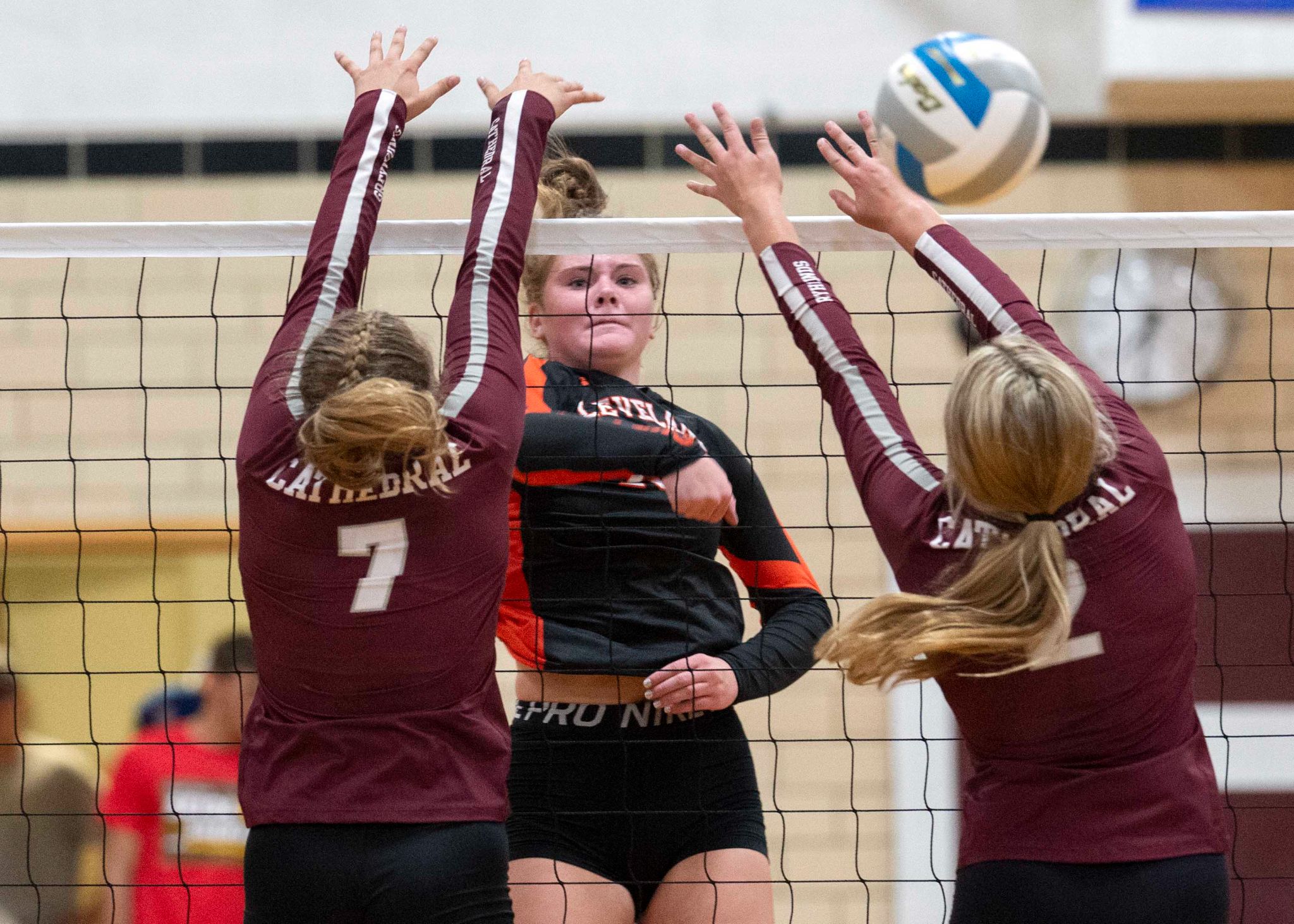 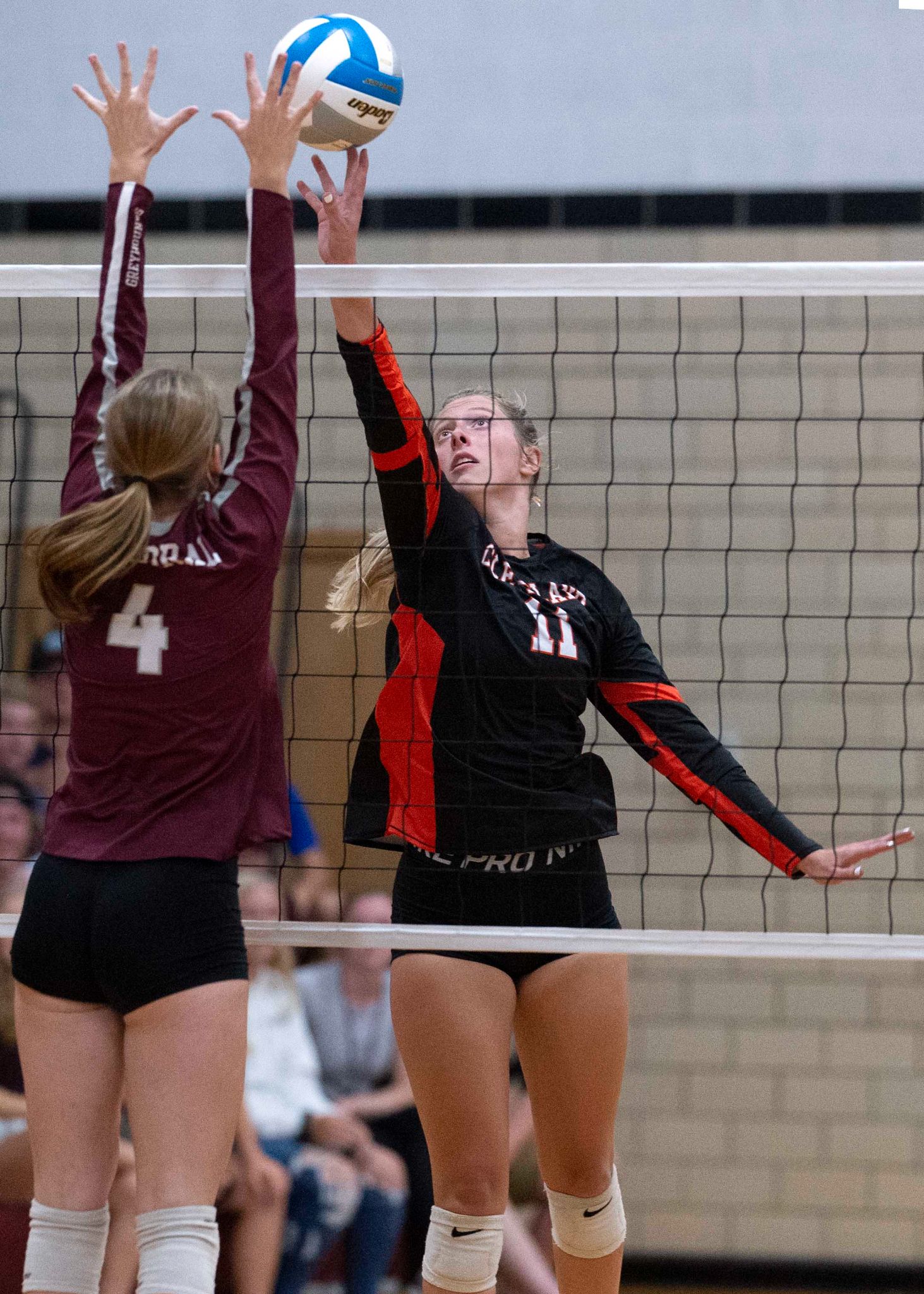 Harley Connor goes to hand-to-hand combat at the net. 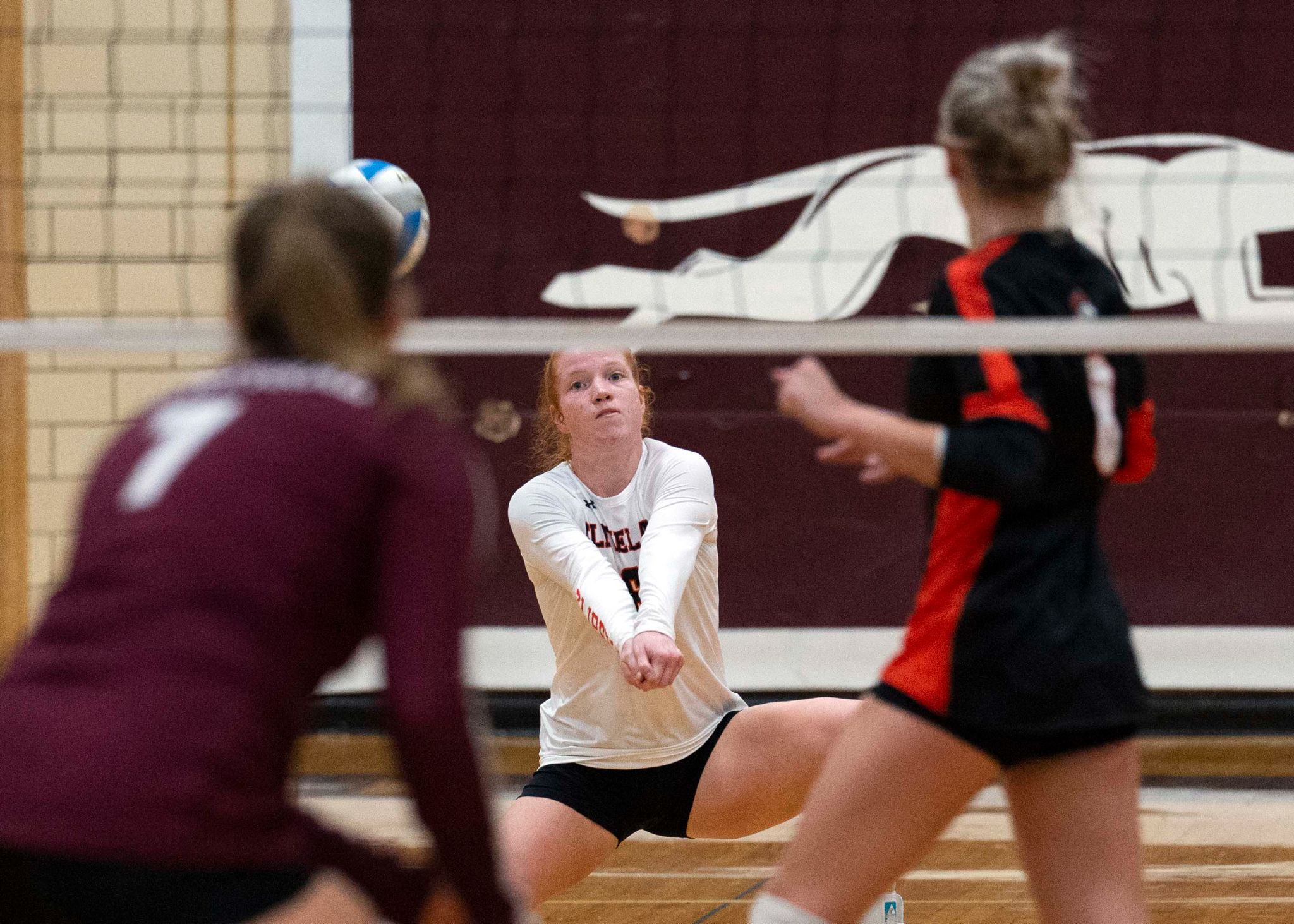 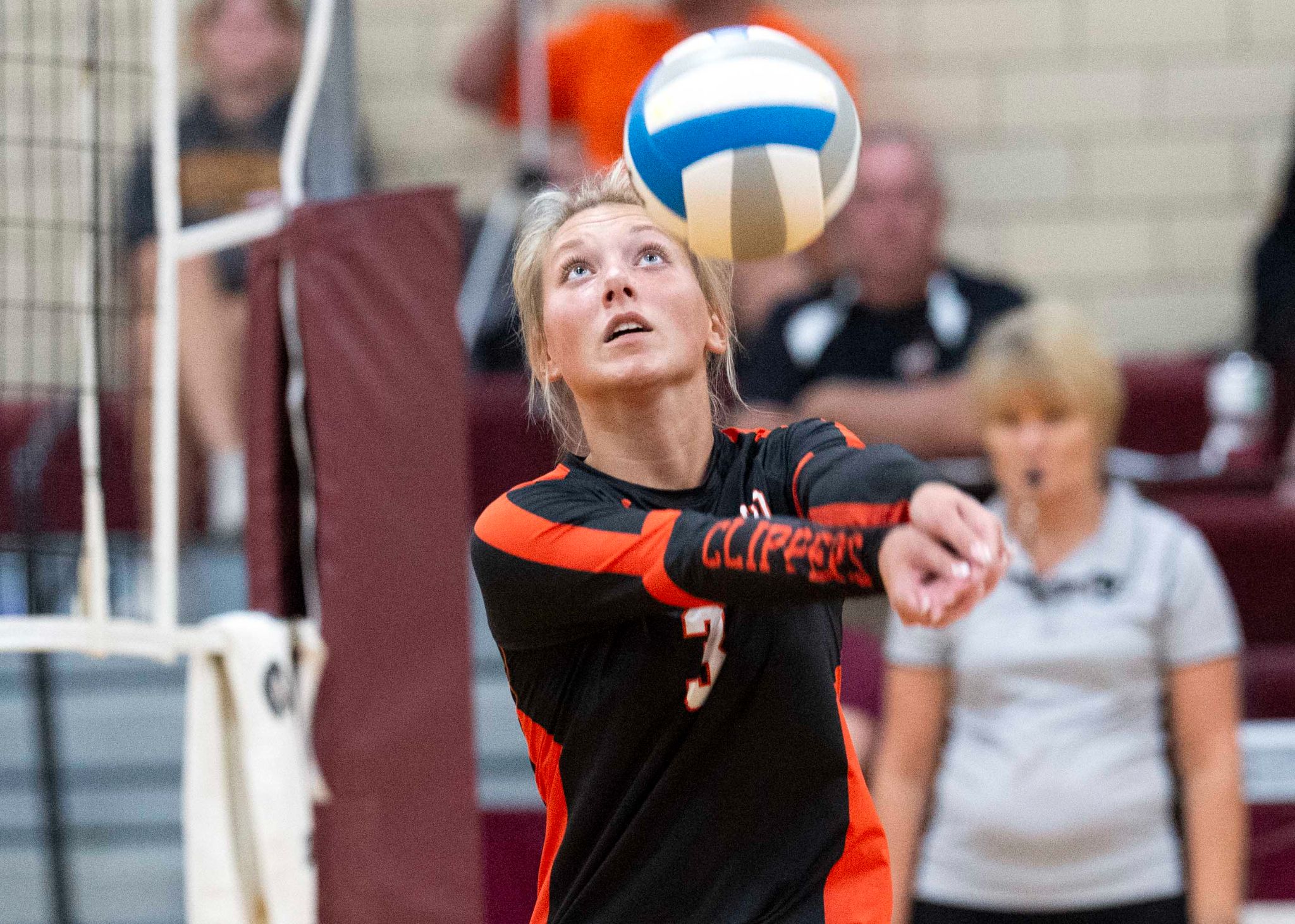 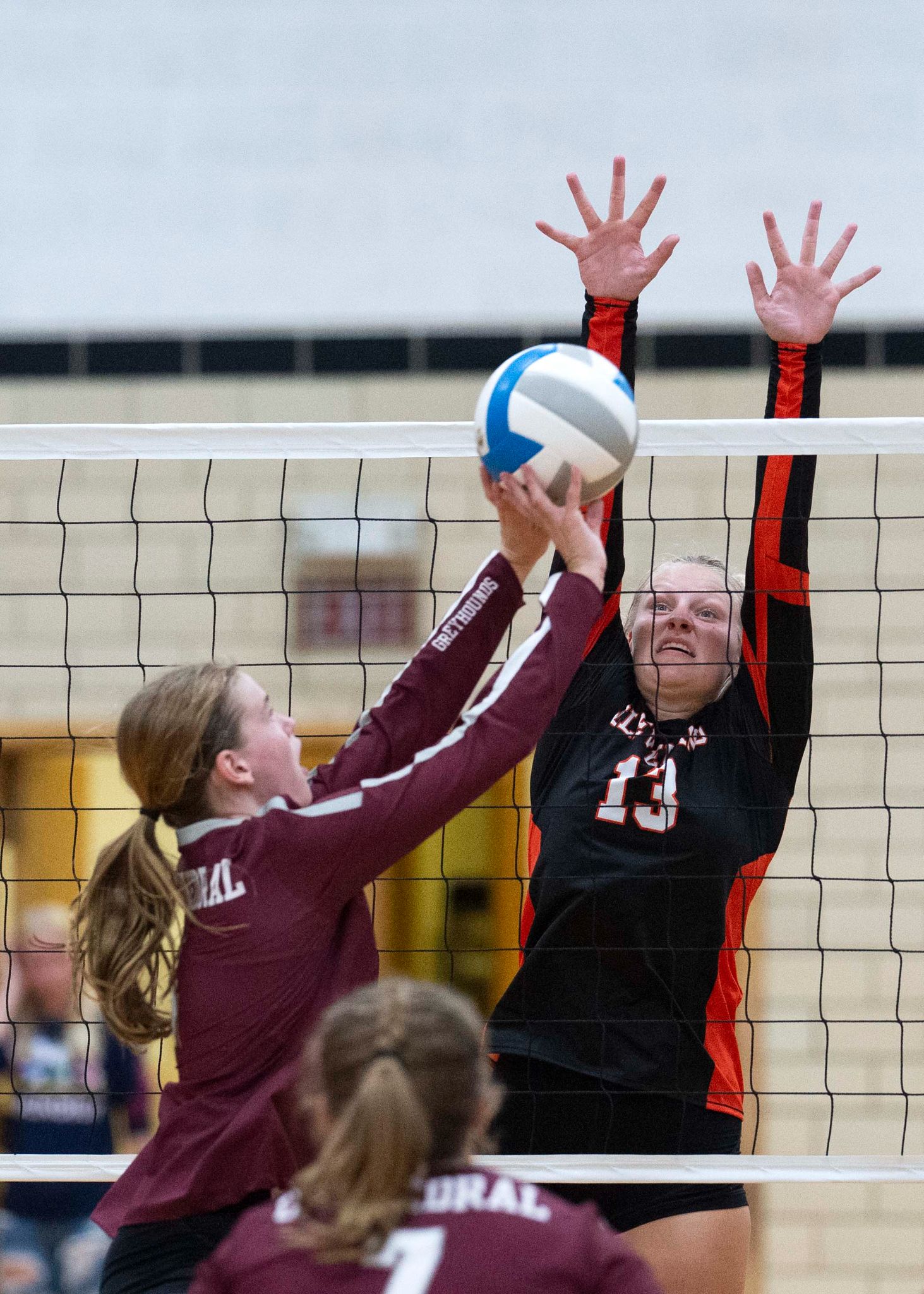 Grayce Kortuem goes up for a block. 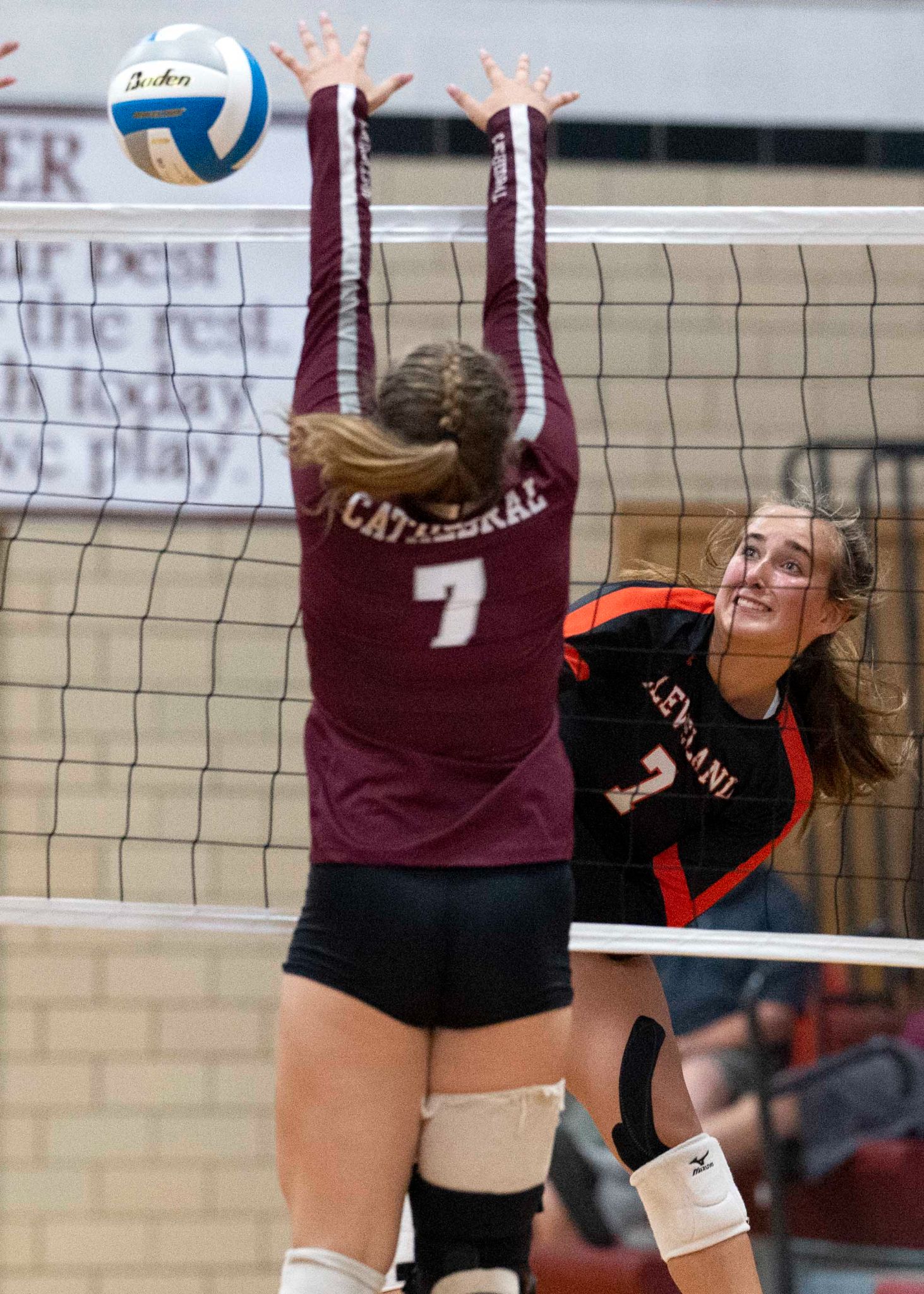 Laci Hollerich follows through after an attack. 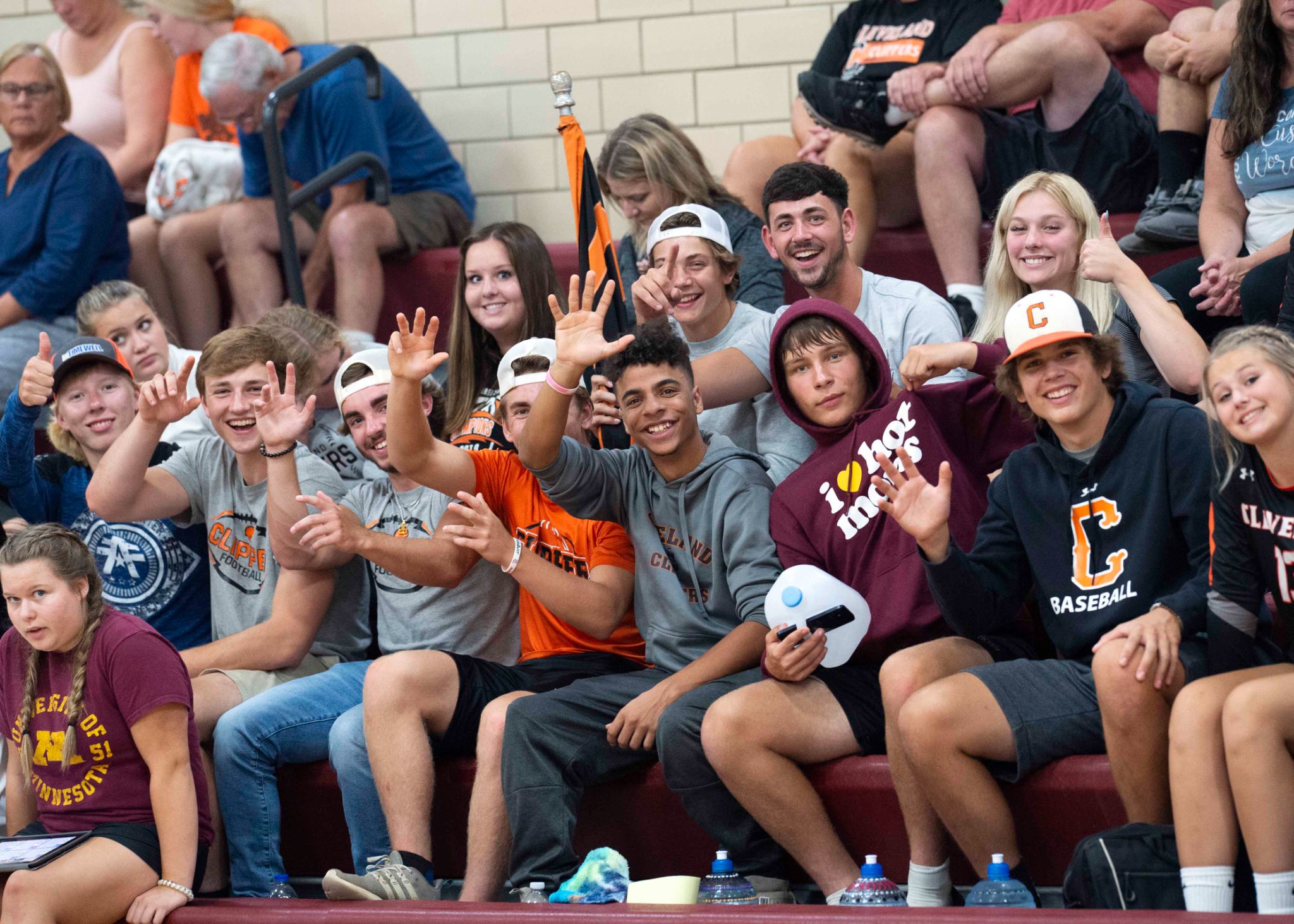 A contingency of Clipper football players made the trip to New Ulm to cheer the girls on. They include, from L-R, front row: Cade Kriah, Jake Anderley, Tommy Kennedy, Carter Dylla, Kaleb Timlin, Fischer Knish and Lucas Walechka. Back row: Jackson Meyer and Kolby Gens.