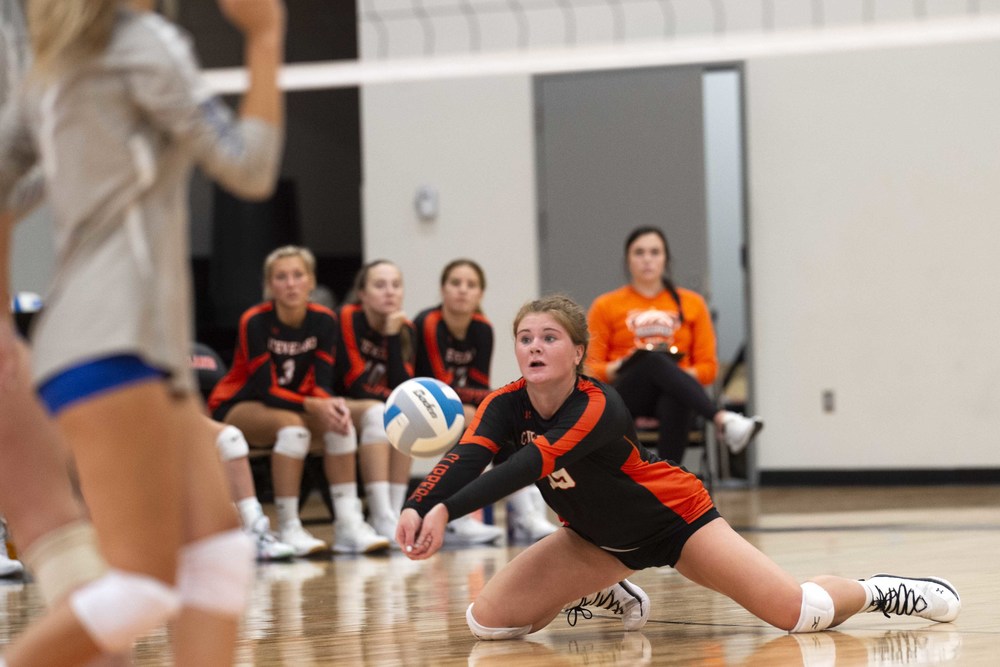 Above: Although they lost momentum in the third game, Emily Kern and company dug themselves out for a win.

In the first official varsity competition of any type the new gym, the Clipper girls downed Janesville-Waldorf-Pemberton 3-1 on Thursday.

The Bulldogs took game three, but the Cleveland eked out a win in game four to avoid a fifth meeting

The night will be a memory to savor, said senior Jordyn Klingel, who had setting duties for the Clippers.

"It’s our senior year…brand new gym…first game here. It means a lot to us."

Taking advantage of an off-the-mark Clipper serve, one of 18 they would have in the match, the Bulldogs scored the first point of game four and then the next two on missed Clipper hits.

"We just have to find out who is consistent," said head coach Bree Meyer. "Everyone wants to serve all the time, but they have to perform. It’s the same thing with hitters. I switched some hitters around too."

Emily Kern got the Clippers on the board with a kill, but the Bulldogs built on their lead to go up 13-7 before another Kern kill was the catalyst to a Clipper comeback; they won the next five points to knot the game at 13.

"We just had to keep in our minds that had to push through," Klingel said. "We wanted this a lot. They did too, but we knew we were better. We just had to take a time out, think about it, take a deep breath and just push through."

With yet another Clipper serve into the net, JWP went up by a point, but freshman Ava Hahn’s kill tied the game once again. The Bulldogs scored the next three points on Clipper errors, but with two more Hahn kills, it was all even at 17.

After three Clipper hits into the net, the Bulldogs were up 21-19, but the Clippers won the next four points with two of them off the hands of Kern.

JWP tied the game at 23 after two Clipper miscues, but they served out of bounds on the next points and then deflected an Emma Sweere serve out of bounds for a 25-23 Clipper triumph.

"We just want to go hard this year," Klingel said. "We’re all supportive of each other, so we’re going to have a good season."

Game one opened with a JWP winner, but that was the last lead the Bulldogs would have. Kern followed a couple of ace blocks with a kill, and Klingel served up a winner to put the Clippers up 9-4.

From there, it was back and forth, but the game ended 25-19 when the Bulldogs shanked a Sweere serve.

Grace Kortuem slapped a kill for the first point of game two. Zoe Porter followed up with an ace serve, and with Laci Hollerich’s attack, the Clippers were in front 3-0.

Taking advantage of off-target Clipper serves, the Bulldogs hung around but never took the lead. Kortuem dropped down a kill for point 24. The Bulldogs scored on a Clipper out-of-bounds hit and again when Clippers let a serve drop, but Kortuem came up with another kill to end the game 25-20.

JWP started game three with an ace serve and a kill. With the Bulldogs in front 4-2, the next five serves—three by the Clippers—either sailed out of bounds or crashed into the webbing, but JWP still led 6-5 before Kern served up an ace.

Hollerich dropped down a hit for a brief Clipper lead, but the Bulldogs went on a seven-point spurt that finally ended on a Kern  attack. Down 21-13, the Clippers scored seven of the next 11 points—five on Kern kills—but the game ended 25-21 when the Clippers jetted a hit out of bounds.

"We were close in coming back," Meyer said. "We’ve done that before, where we’ve gotten down and came back and won the match. That’s what we worked on in the summer: when you get down, don’t give up. We just need to make those serves and be confident…trust each other and communicate."

"Greta really stepped up tonight," Meyer said. "Her playing back row for Emily helped a lot."

Harley Connor had three kills, one block and a pair of digs. Maddy Steen had two kills. Hollerich had four kills and one dig.

Savannah Meyer landed all 10 of her serves. Kern, Sweere and Klingel each had a pair of service aces.

The Clipper varsity returns to action on Tuesday when it hosts non-conference Mountain Lake. 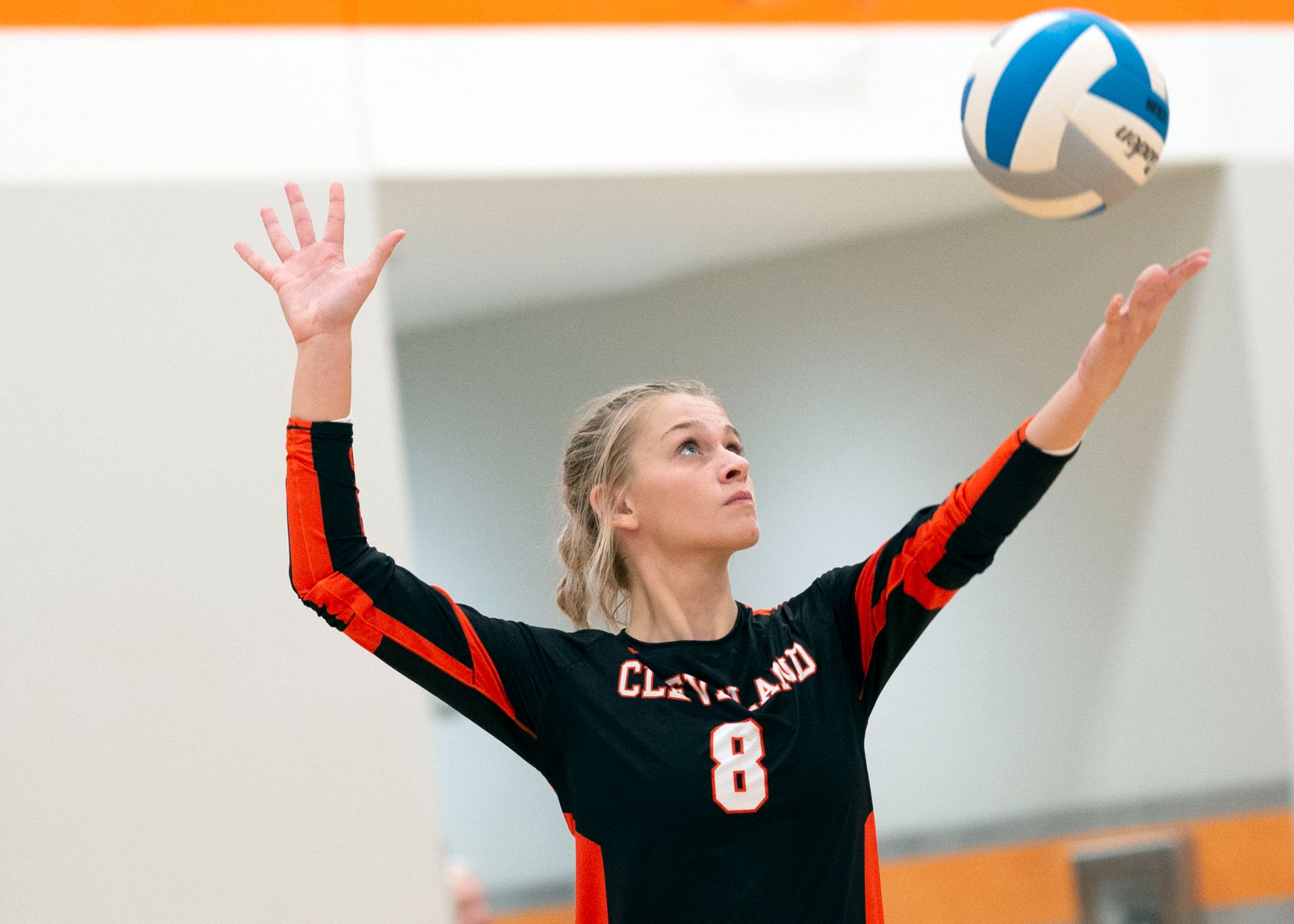 With Taylin Gosch returning to the lineup next week, Jordyn Klingel, shown serving here, will switch from setter to outside hitter and also play some back row. "She was hitting all summer, and her energy on the court helps a lot," said head coach Bree Meyer. 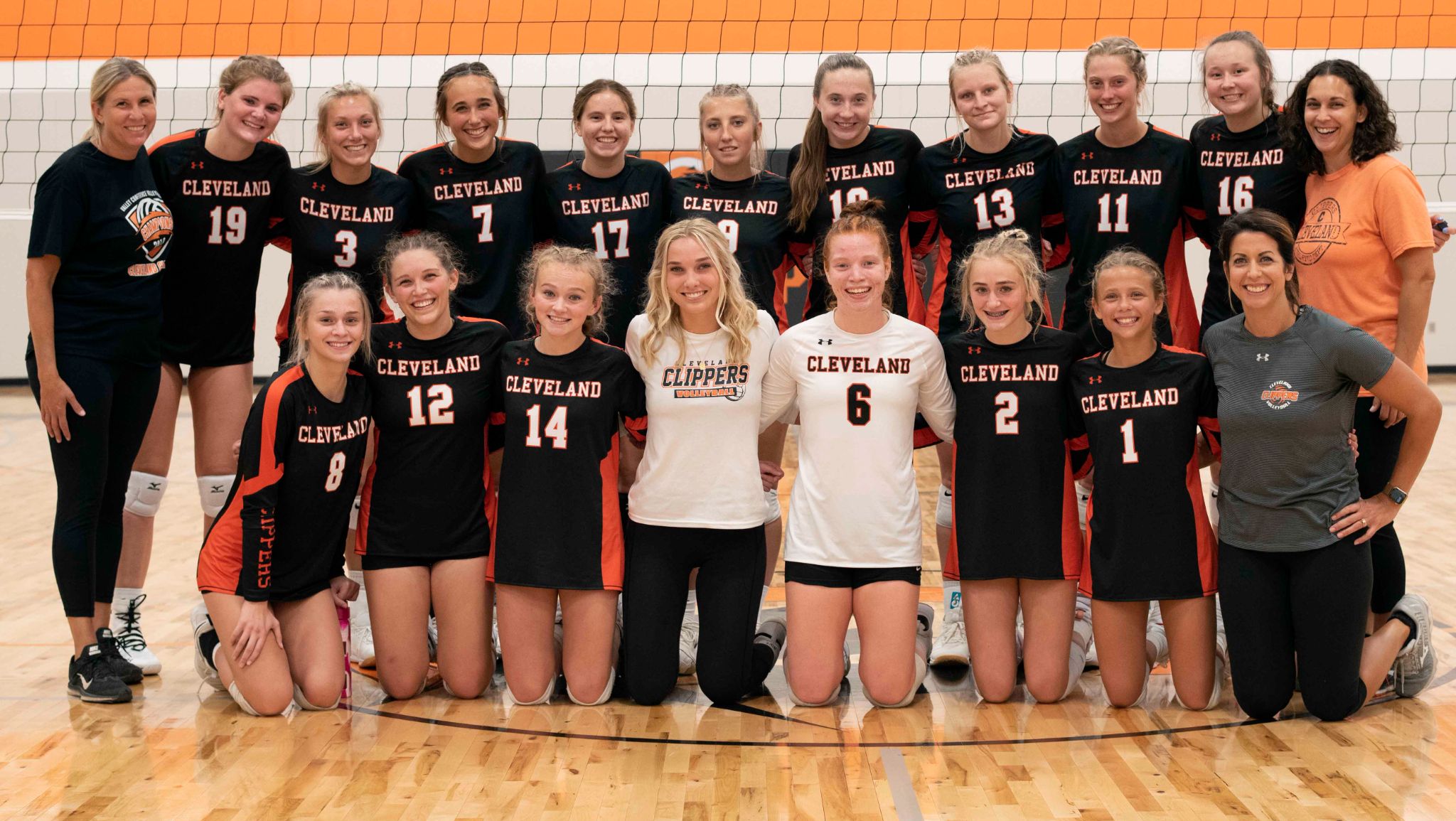 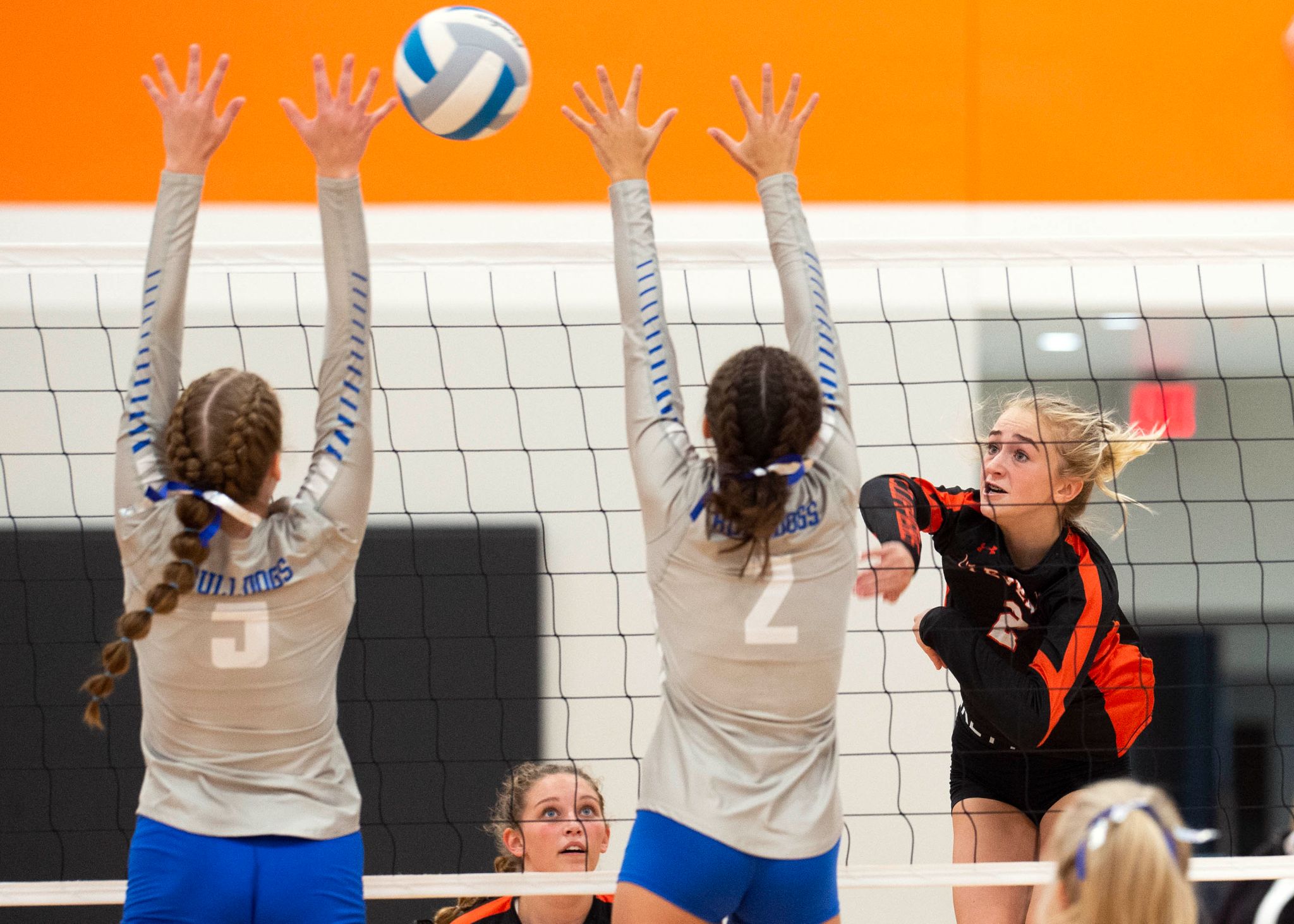 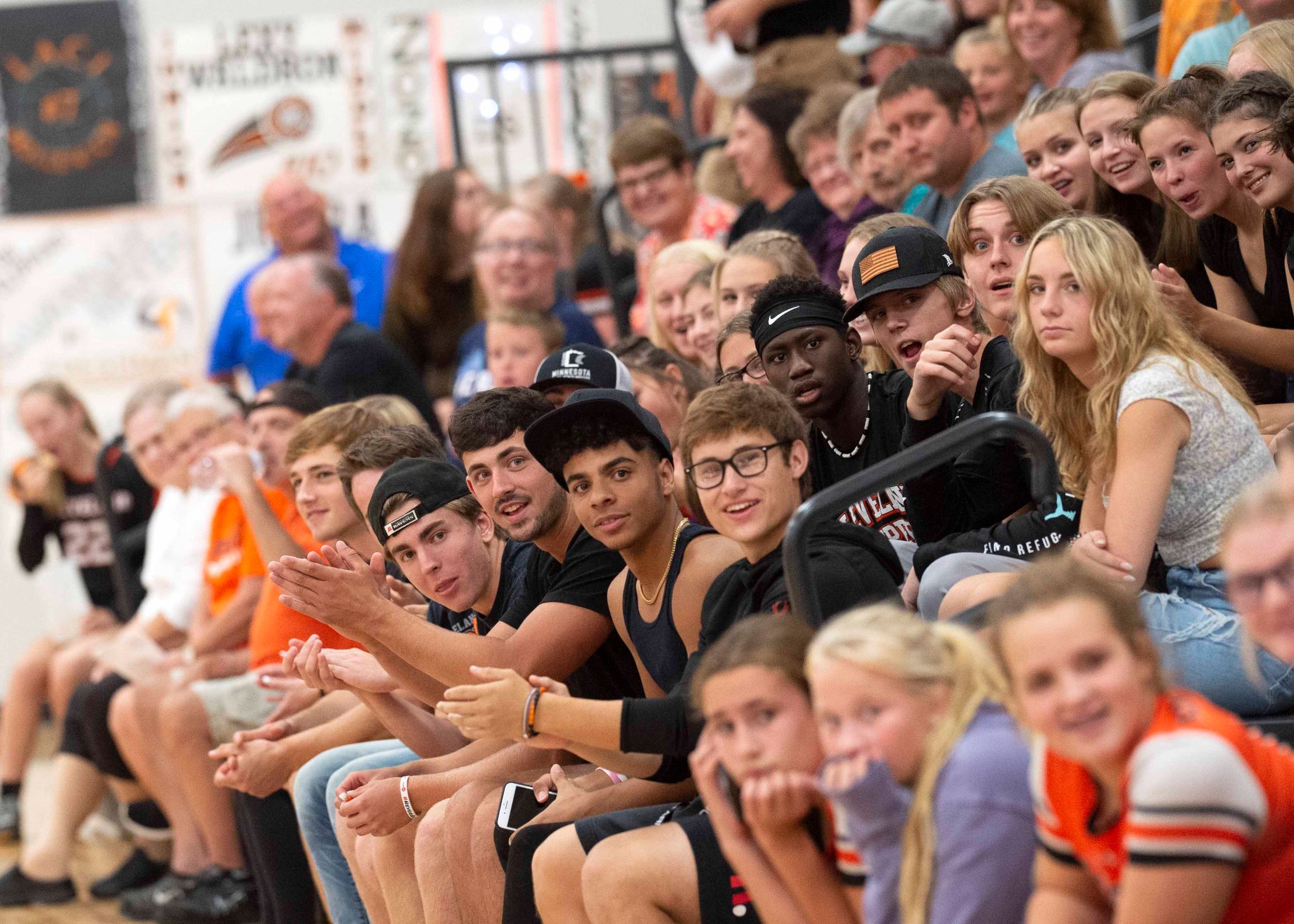 A sizable crowd showed up for the first official games in the new gym. 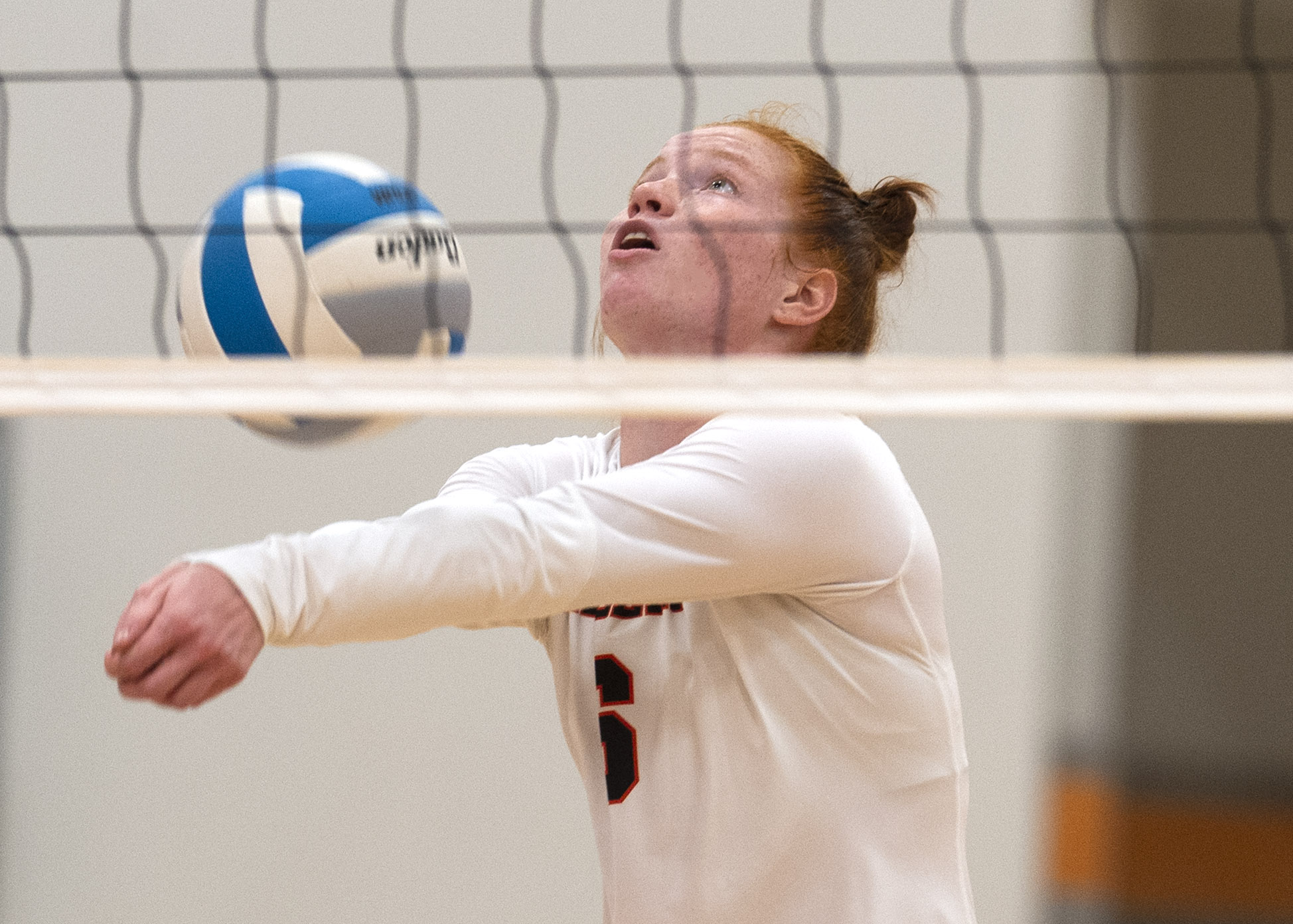 Libero Emma Sweere on the bump. 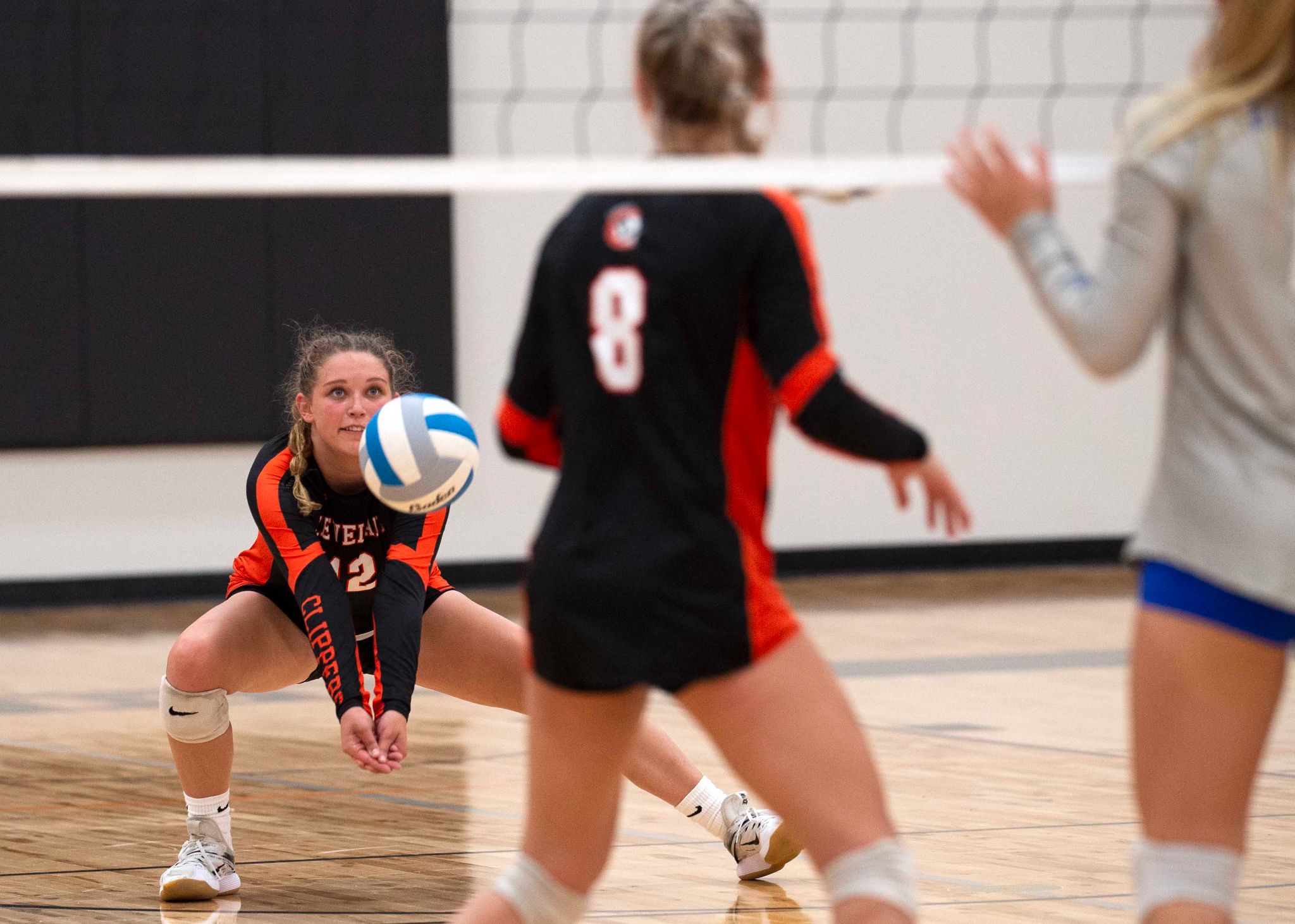 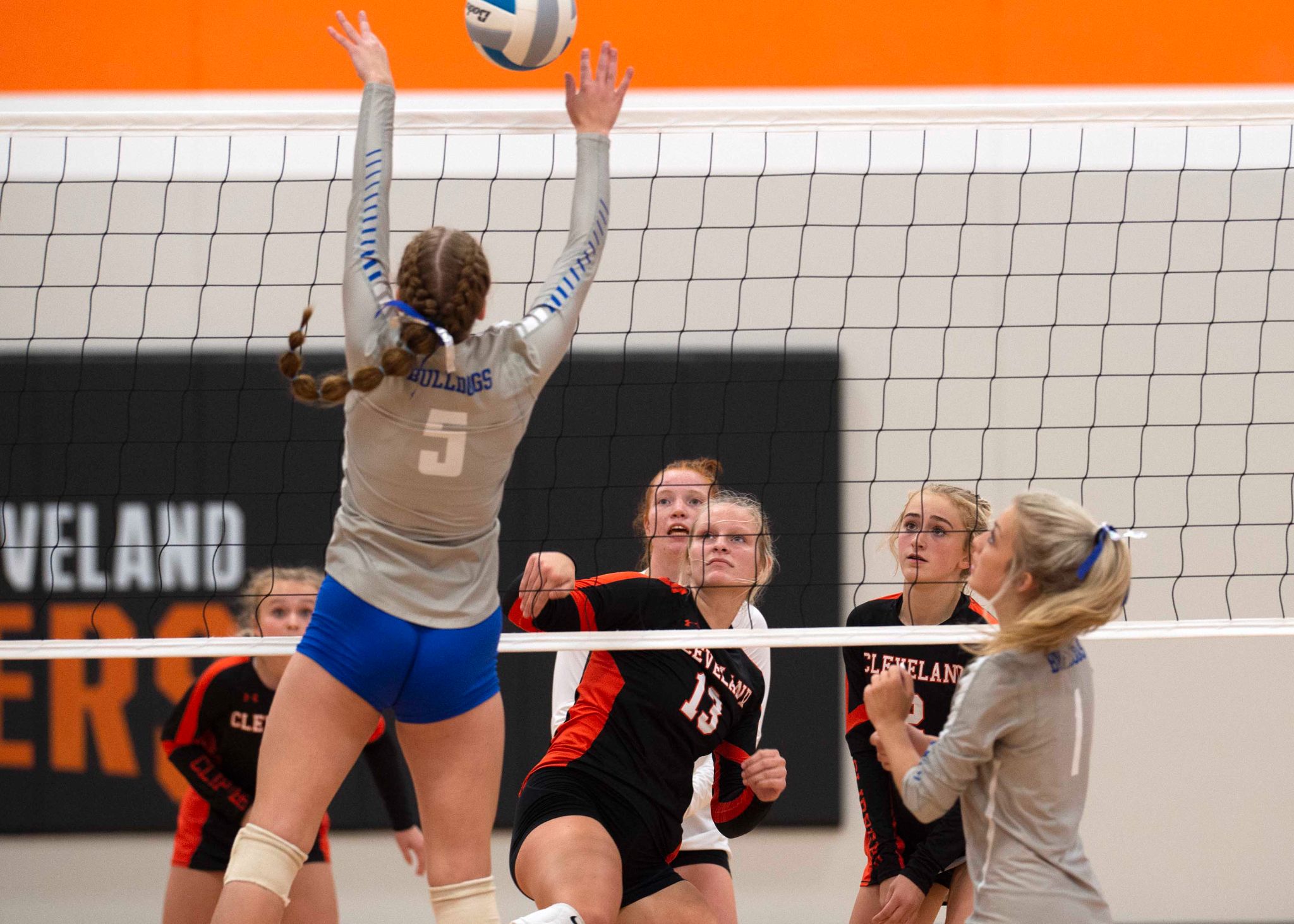 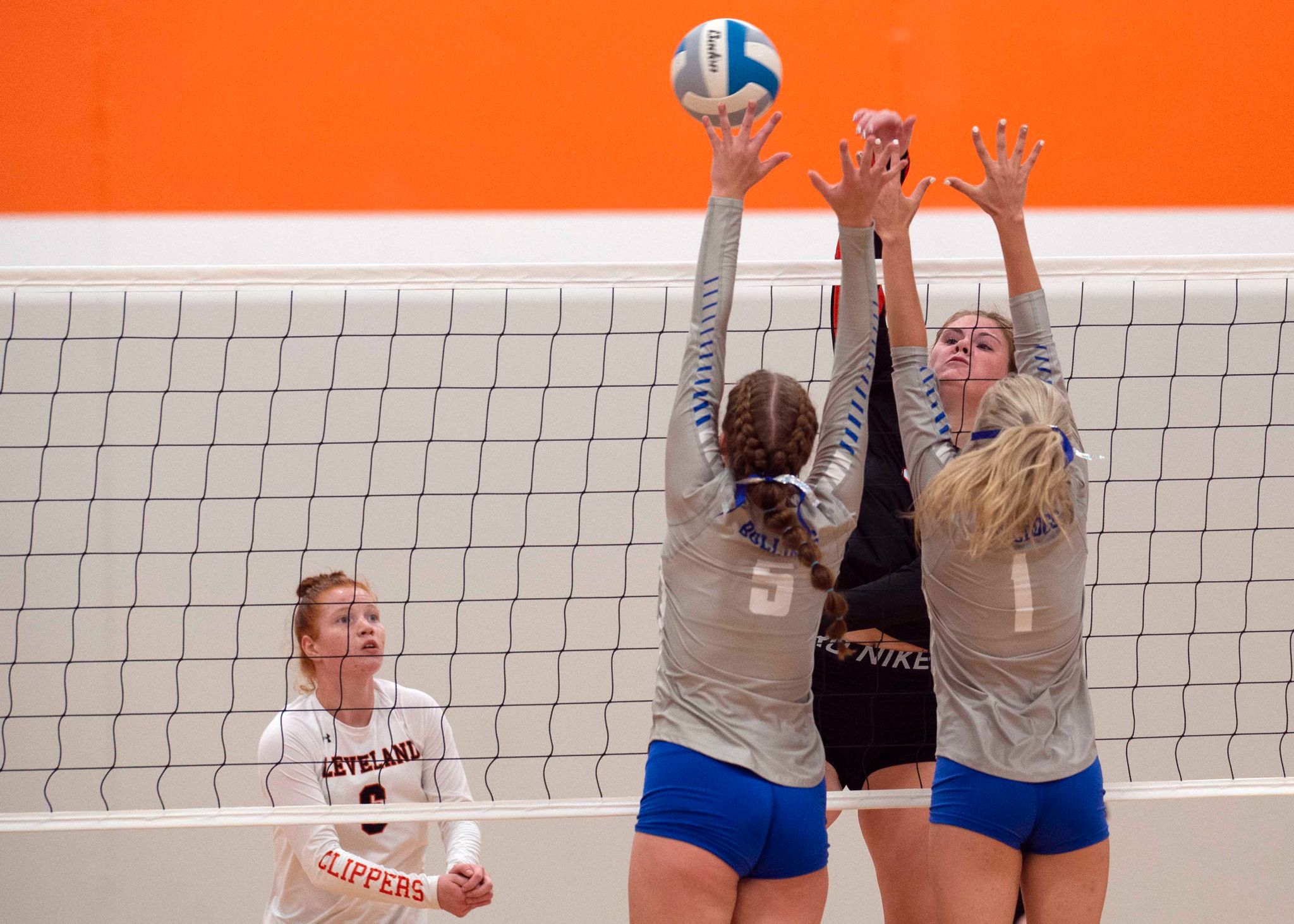