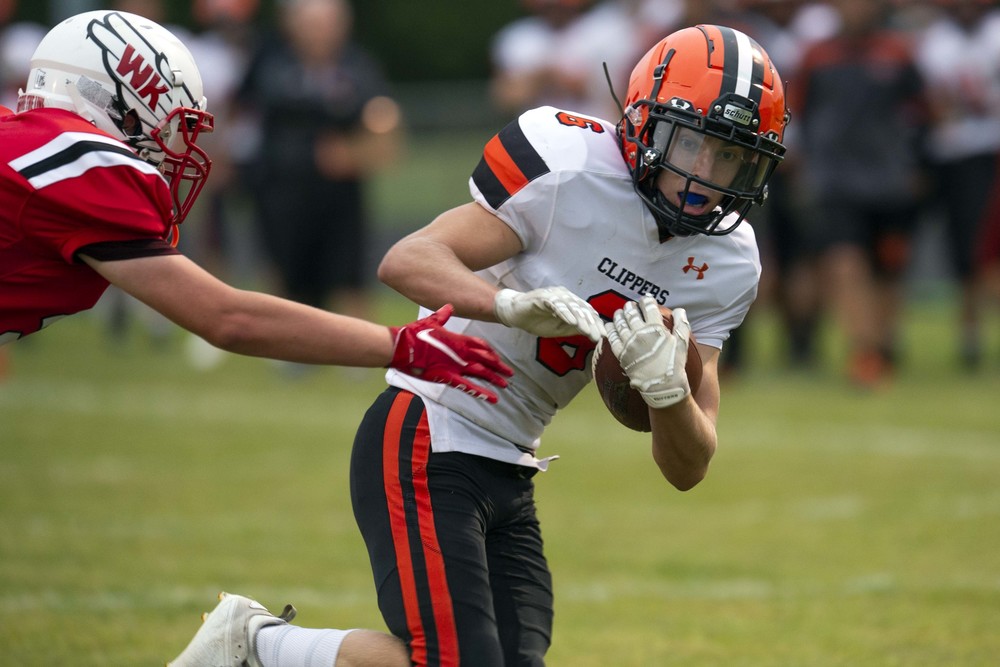 Above: Carter Dylla on the catch and run for the Clippers’ second touchdown.

The long and winding road that leads to Wabasha also led the Clippers to a 41-0 victory on Thursday in the football season opener.

“The thing that we were counting on and that luckily came through is that the seniors were great leaders,” said head coach Erik Hermanson. “It’s great to have success, and all the things we preached these first couple of weeks in practice came to fruition.”

Five plays after the opening kickoff, Jackson Meyer intercepted a Falcon pass and sprinted down the sideline for a 45-yard pick 6.

Henry Strobel booted in the PAT, and from there, the Clippers never looked back.

After the Clipper defense held Wabasha-Kellogg to negative yards in two plays, Colin Krenik stepped in front of a Falcon pass and returned it 33 yards to the 12.

From there, Tommy Kennedy plunged for 6 yards, and quarterback Meyer followed up with a toss to Carter Dylla for a score. Strobel airmailed the PAT over the crossbar, and the Clippers were suddenly up 14-0.

“Jackson starting off with a big pick. Colin with another…that’s just the seniors stepping up and leading, and they did the same thing on offense with Carter Dylla,” Hermanson said.

The Falcons managed to pick up a couple of first downs on their next possession but turned the ball over on downs at the Cleveland 25. From there, Kennedy dashed for 8 yards, and Meyer kept the ball for another 8 before hurling it to Dylla for a 58-yard catch and touchdown run.

With another Strobel point-after kick, the Clippers, still in the first quarter, were up 21 to zippo.

Held deep in their own real estate, the Falcons punted on their next series. Cleveland went three and out too, but Strobel’s punt—the only one the Clippers would have—took a Cleveland roll to the W-K 6-yard line.

After the Clipper defense backed up the Falcons 3 yards, Carter Barto sacked the Falcon's QB in the end zone for the safety.

Three plays after the free kick, Meyer hooked up with Dylla for a 45-yard touchdown catch and run. The Falcons blocked the PAT kick, but the Clippers were up comfortably 29-0 with 7 minutes left before the intermission.

“It feels so good,” said Lucas Walechka, a 215-lb senior linebacker and lineman. “You put in all that work, all winter and all off season. To come out here and put up the numbers like we did, the amount of picks, and all the stats, that really feels good to have it payoff. It’s a good confidence booster for everyone.”

The Clipper defense forced another three and out. Taking over on the Falcons 47, they were moving downfield before time ran out in the half.

Dylla took the second-half kickoff 30 yards Cleveland 46. From there, Kennedy, Krenik, Strobel and Dylla clicked off runs with the Kennedy crossing the goal line from 11 yard out. Strobel’s PAT kick was just outside the upright, but the Clippers were up 35-0.

With many of the starters watching from the sidelines and freshman Blake Lyons behind center, the Clippers put the finishing touches on the triumph when Strobel dove 5 yards for the score. The Falcons stopped the ensuing PAT run.

Meyer threw just six times, but in his four completions he racked up 130 yard and three touchdowns. He also kept the ball six times for 18 yards Lyons was successful in one of his two passes for 13 yards.

Dylla pulled down four catches for 130 yards and three touchdowns. Freshman Kale Kelley had one catch for 13 yards.

Strobel carried the ball a dozen times for 75 yards and a touchdown. Kennedy had seven rushes for 50 yards. Krenik ran 11 times for 41 yards. Lyons had two carries for 13 yards. Junior Braeden Hastings had two runs for 7 yards.

“Both of our line  coaches, Larry Walechka and Matt Miller, have done such a great job with these guys…counting the tight ends, five to seven guys that got beat up the last three years playing against bigger, stronger guys. But they made the decision to be dedicated and lift, and tonight they were able to get to that next level, to push their guy back, to assert themselves and take control of the game.”

Forced by Walechka and recovered by Barto, the Falcons fumbled once. Cleveland fumbled five times with two of them turnovers. Most of the fumbles were on the snap.

“Our starting center Fischer Knish hurt his hand,” Hermanson explained. “He had to come out. Our backup center Lucas Walechka had to some in, so we had a few bad exchanges just from switching centers, but then they got it under control.”

Stepping up early, Jacob Anderley had two solo tackles and one assist before hampered by an Achilles heel.

“We missed him so much last year,” Hermanson said of Anderley. “It made a huge difference right away having someone who lifted all year, got stronger and wanted to play so badly. He was a man among boys out there.”

Stymied by COVID, Wabasha-Kellogg didn’t have a season last year.

The Clippers will take on Waterville-Elysian-Morristown at home on Friday. Hermanson noted that this will be the first game at home without audience restrictions in almost three years. 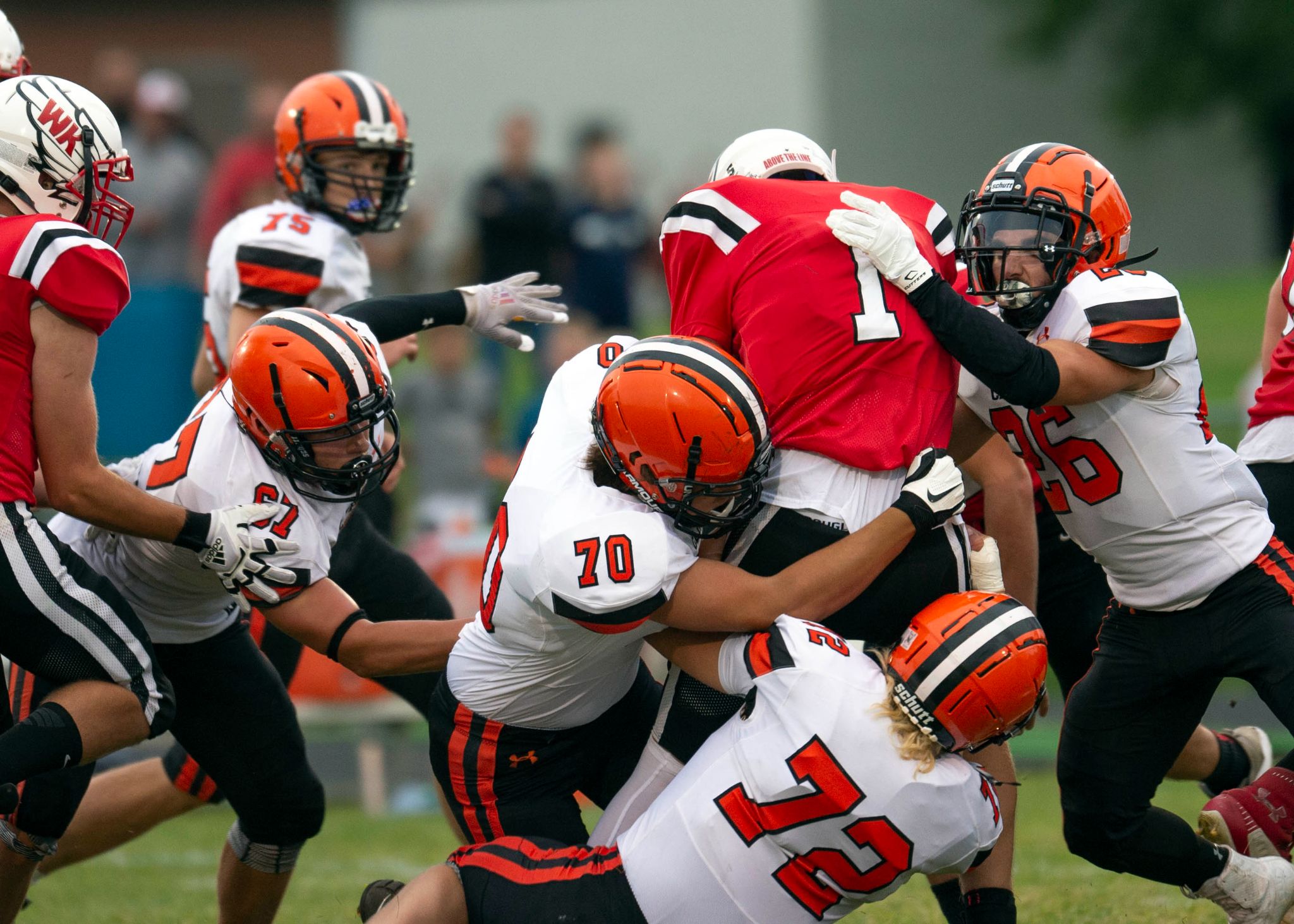 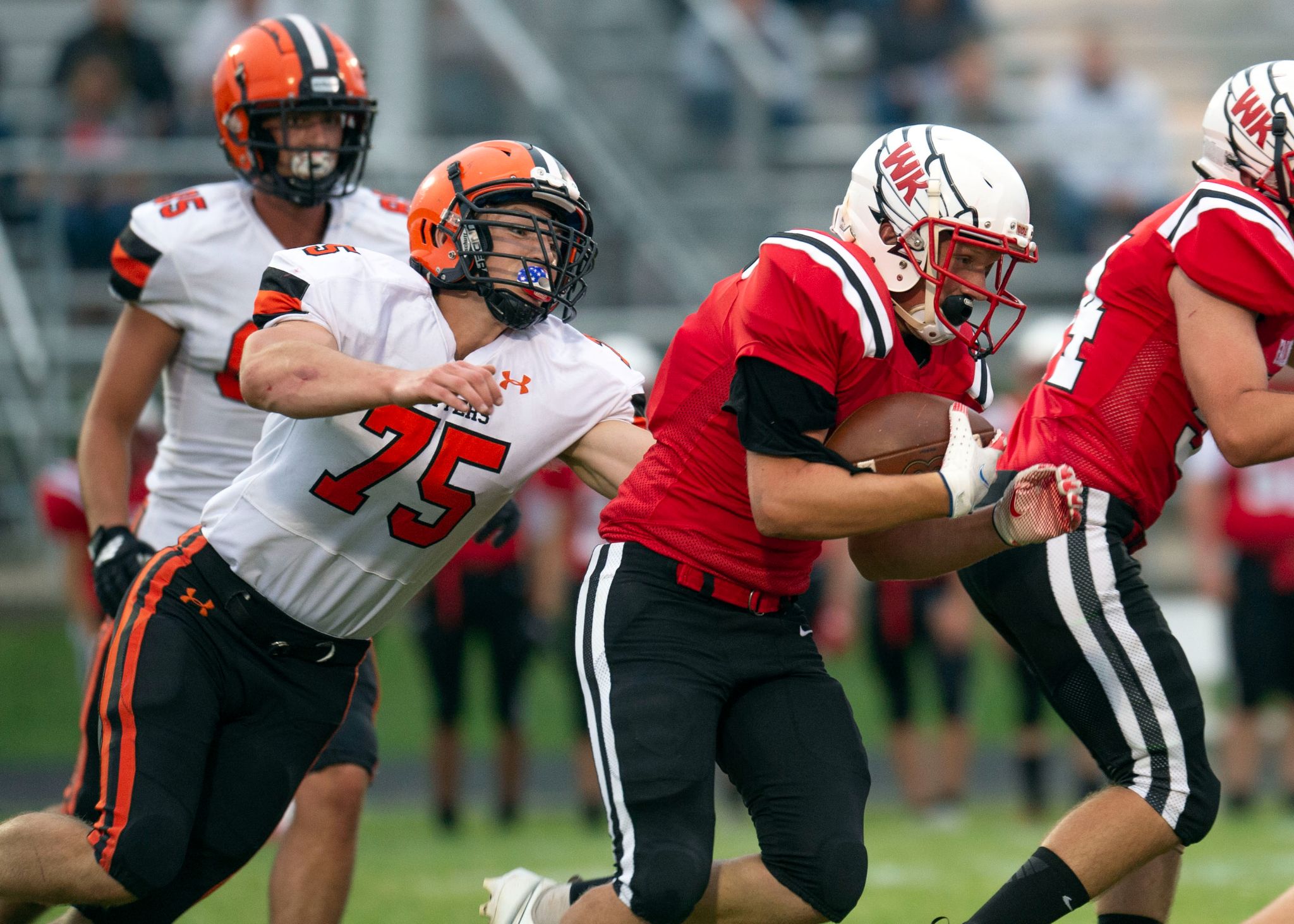 Jacob Anderley was a beast at the start but later was hampered by an injury. 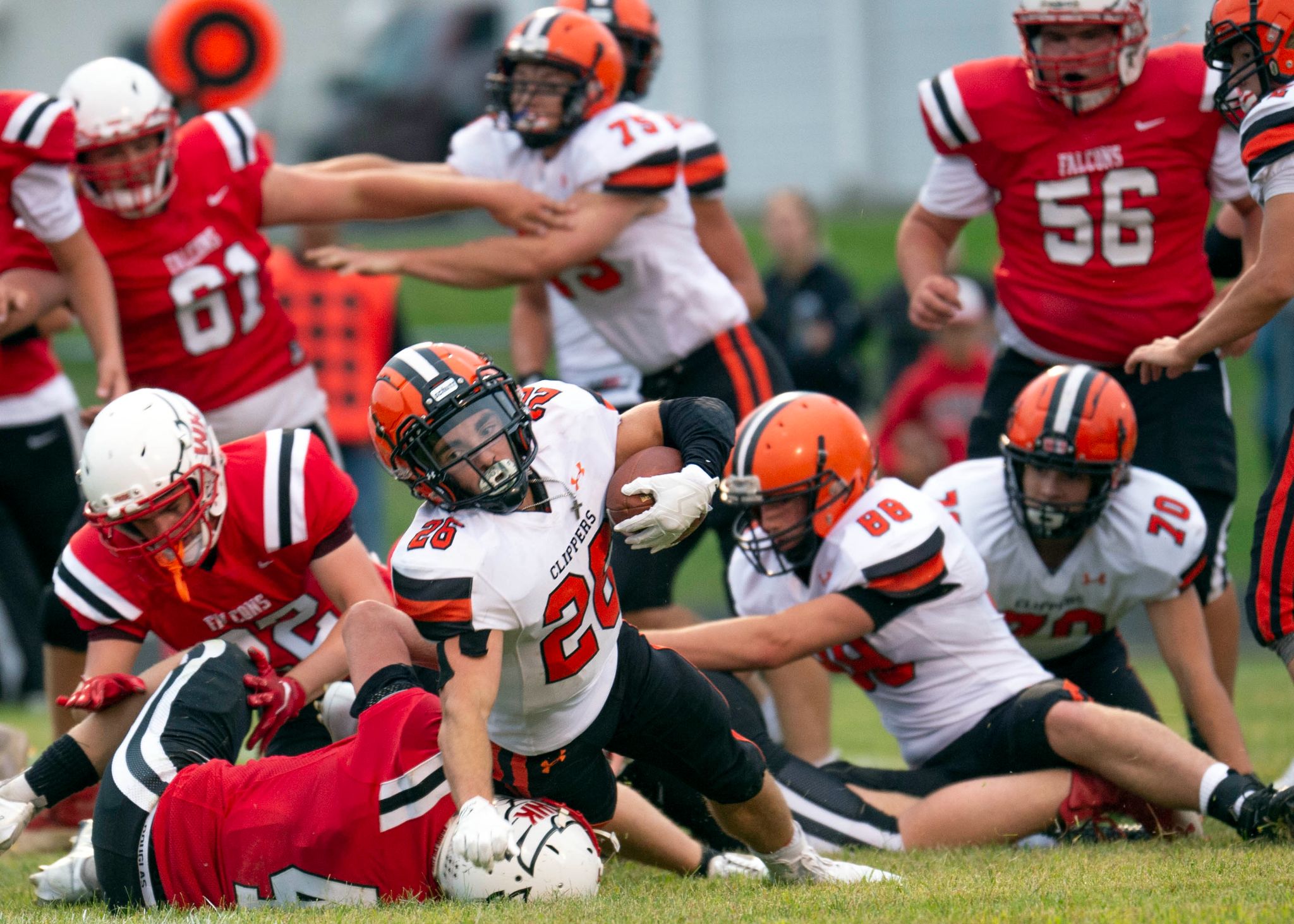 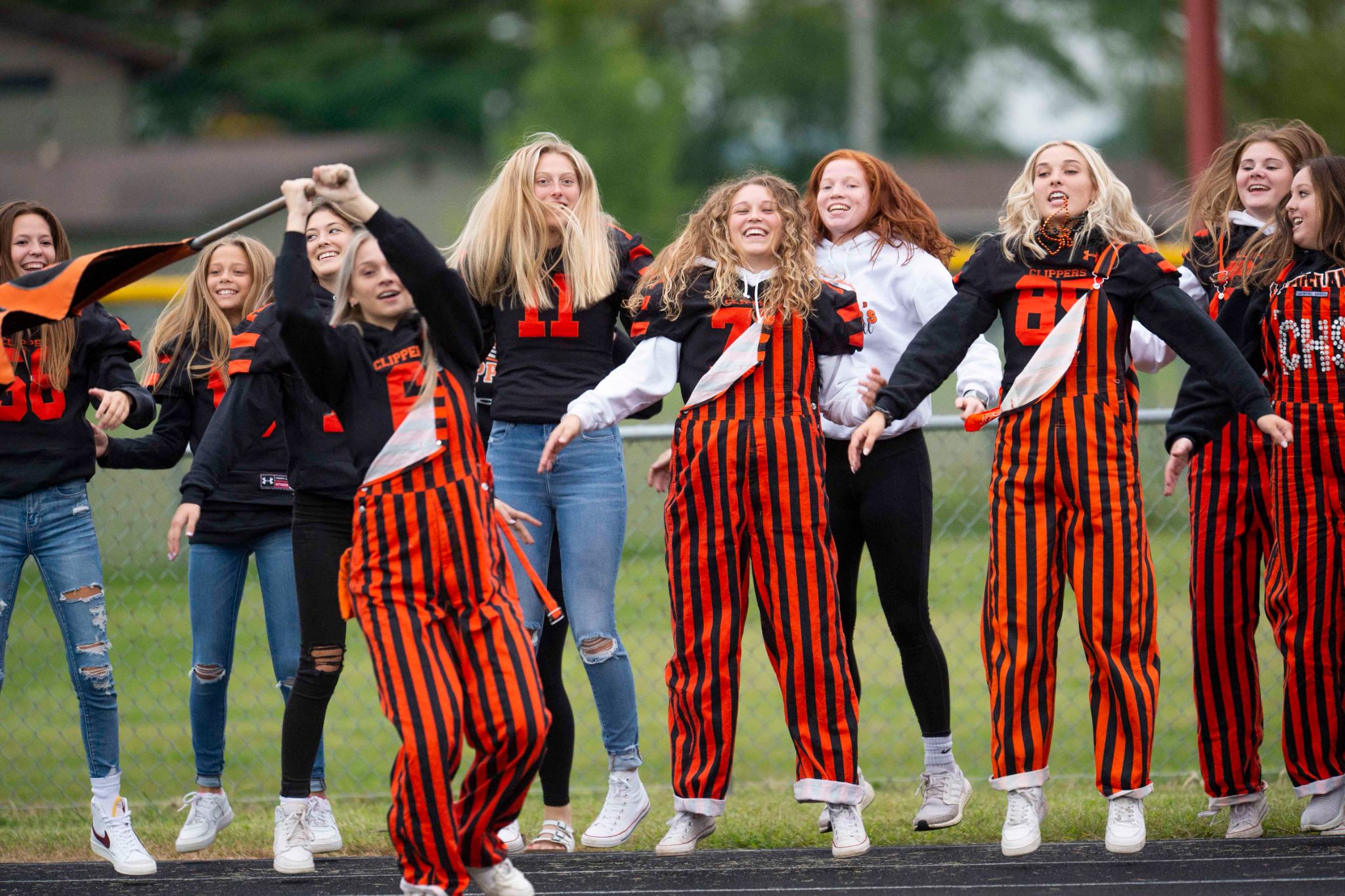 The bib girls had a lot to cheer about. Waving the flag is Jordyn Klingel. 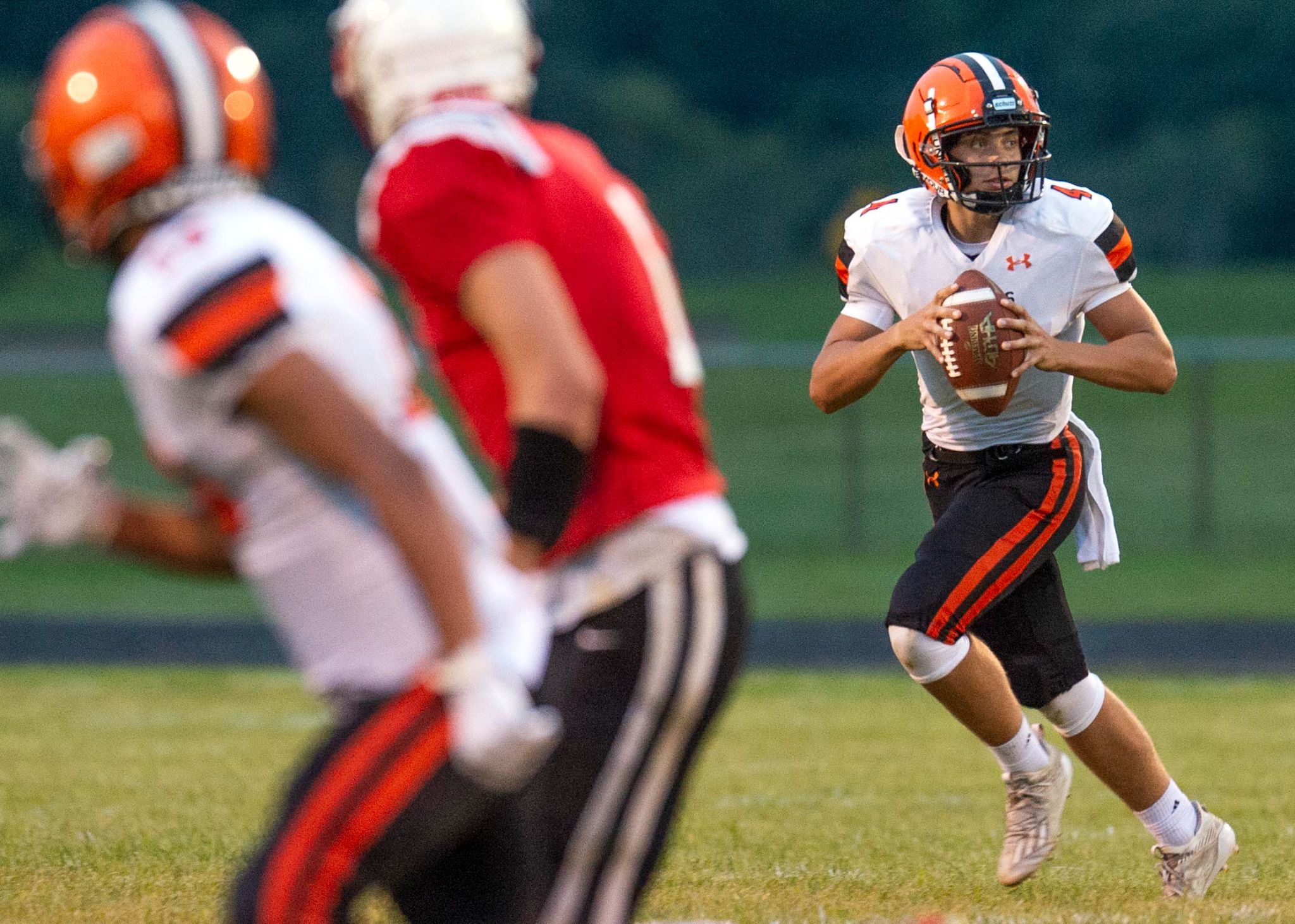 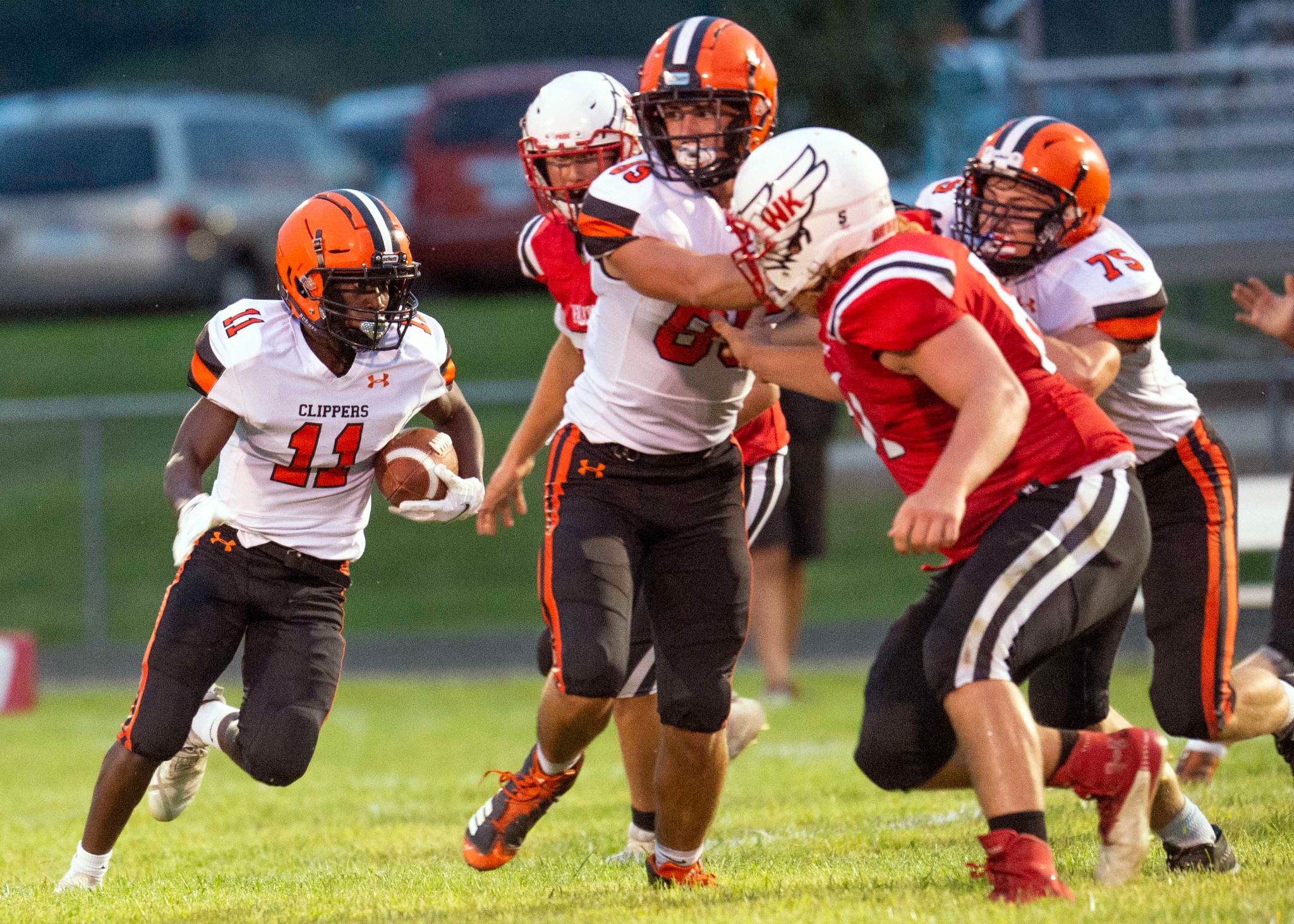 Henry Strobel on the carry. Clearing space out front is Kolby Gens. 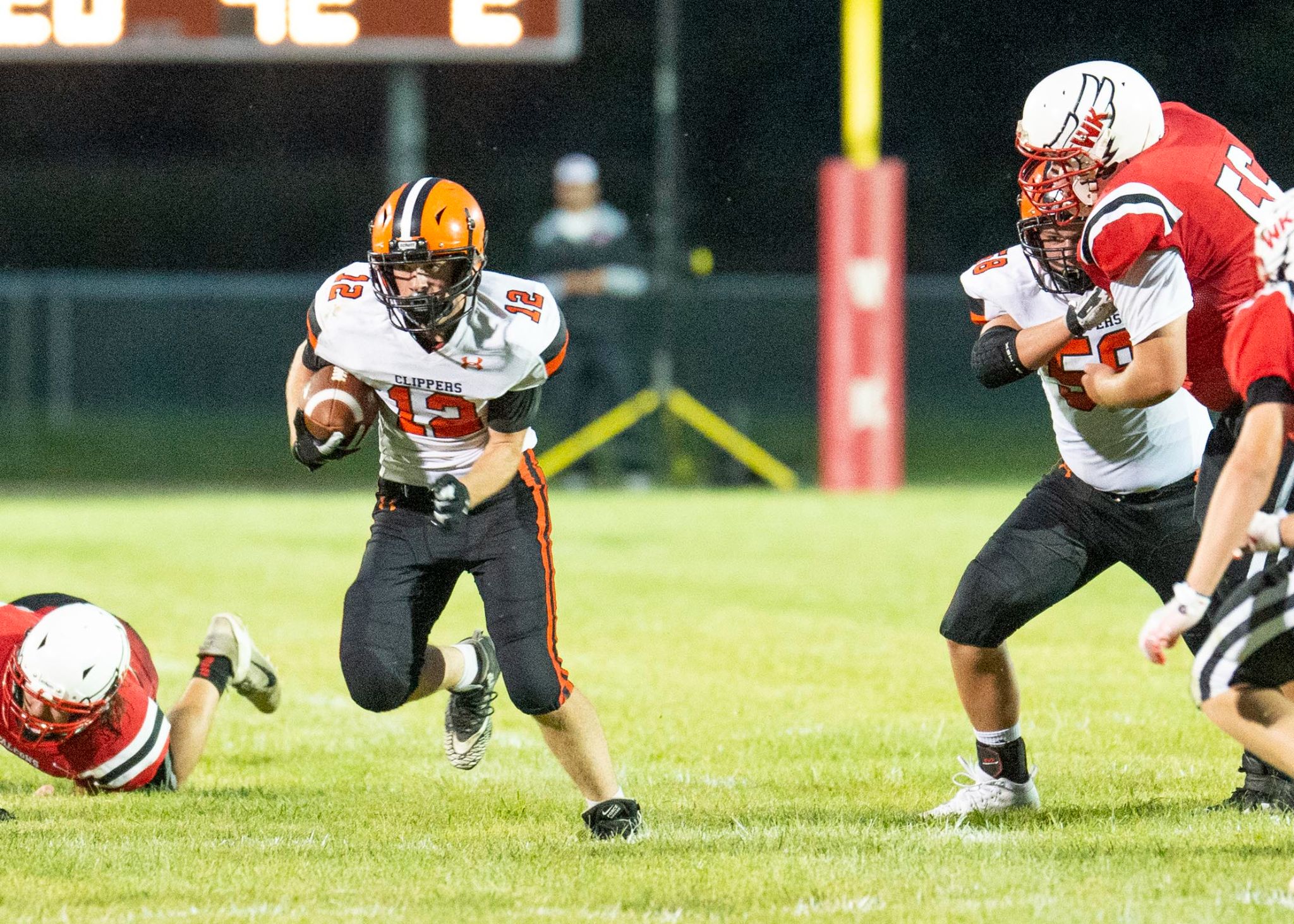 Colin Krenik sprints through a big hole. Blocking for him is Tanyon Hoheisel.