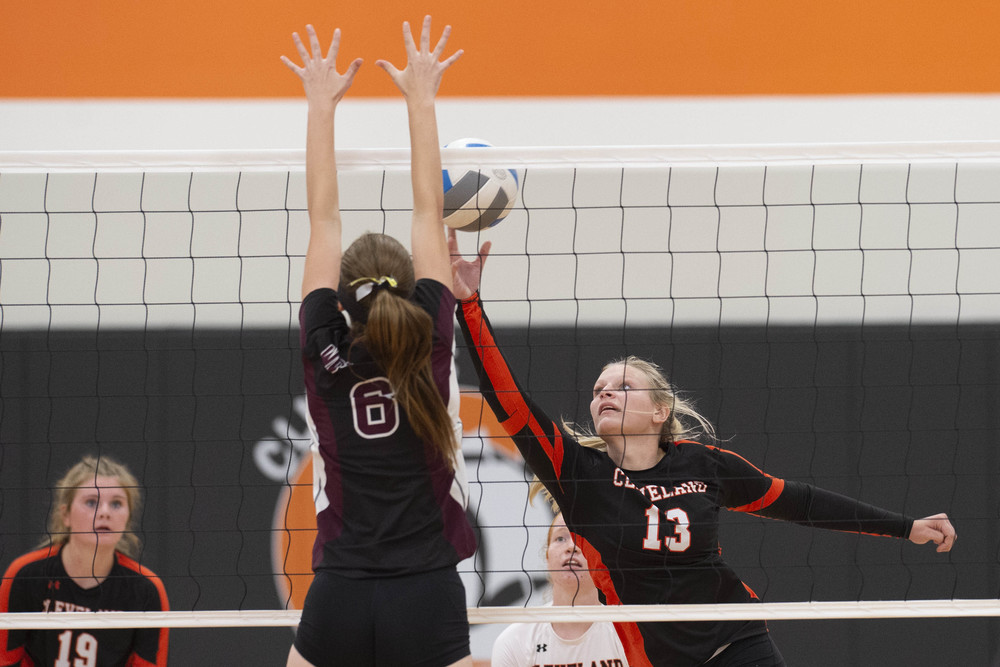 Above: Grayce Kortuem reaches out for a volley.

Visiting Mountain Lake was skilled at keeping the ball afloat, but the Wolverines ultimately succumbed to the Clipper varsity’s firepower on Thursday.

The Clippers won all three games in their first sweep of the season.

Senior middle hitter Grayce Kortuem said the Clippers made a few errors hitting and passing and Mountain Lake had a good outside hitter who found her spots, so the win wasn’t a cake walk.

“They were really scrappy,” “We really came out strong and very positive, so that helped us. We did make a lot of mistakes, but in the end we came out on top.”

With the Clippers trailing 2-0 in set one, Kortuem dropped down an ace tip, Emily Kern posted an ace block and swatted a kill, and Savannah Meyer dispatched a service ace during a 5-point Clipper spurt.

The Wolverines closed the gap after that but sent three-straight hits out of bounds while Kortuem laid down a kill, and Jordyn Klingel—moved from setter to back to hitter, a role that she practiced all summer—swatted a kill and tapped an ace tip to put the Clippers up 15-9.

Mountain Lake went on runs of 5 points and then 3 points to pull within two, 20-18, but the Clippers scored 5 of the next 6 points. The first four for the Clippers came from a Taylin Gosch ace serve, two Kern kills and a Laci Hollerich attack.

Game two see-sawed at the start, and the Wolverines led 10-9, but after a Kortuem kill, Kern, taking a position in the front row, put a few dents in the new gym floor as she laid down a hat trick of kills. After a Klingel attack, the Clippers were suddenly up 14-10.

Cleveland never trailed in game three, but down 23-15, the Wolverines took the next seven points to pull within one before Gosch, feigning a set, found a vacant slot in Mountain Lake territory.

The Wolverines responded with an ace tip, but Kortuem slapped a Gosch pass over the mesh and to the ground for a 25-23 orange-and-black triumph.

“Emily was able to hit over the block and Grayce too,” said head coach Bree Meyer.

Klingel and Ava Hahn each had four kills. Gosch and Harley Connor each had three kills. Hollerich and Maddy Steen each added one kill.

Meyer said the players are accustomed to Gosch’s setting, and that made a difference in the win.

“Taylin is a leader on the court,” Meyer added. “She has that confidence and hustles to the ball.”

Improving some from the last outing, the Clippers missed 10 serves.

“It wasn’t fabulous, but it was a lot better than the 18 we had,” Meyer said.

Gosch, Kern and Hahn each sent over four ace serves. 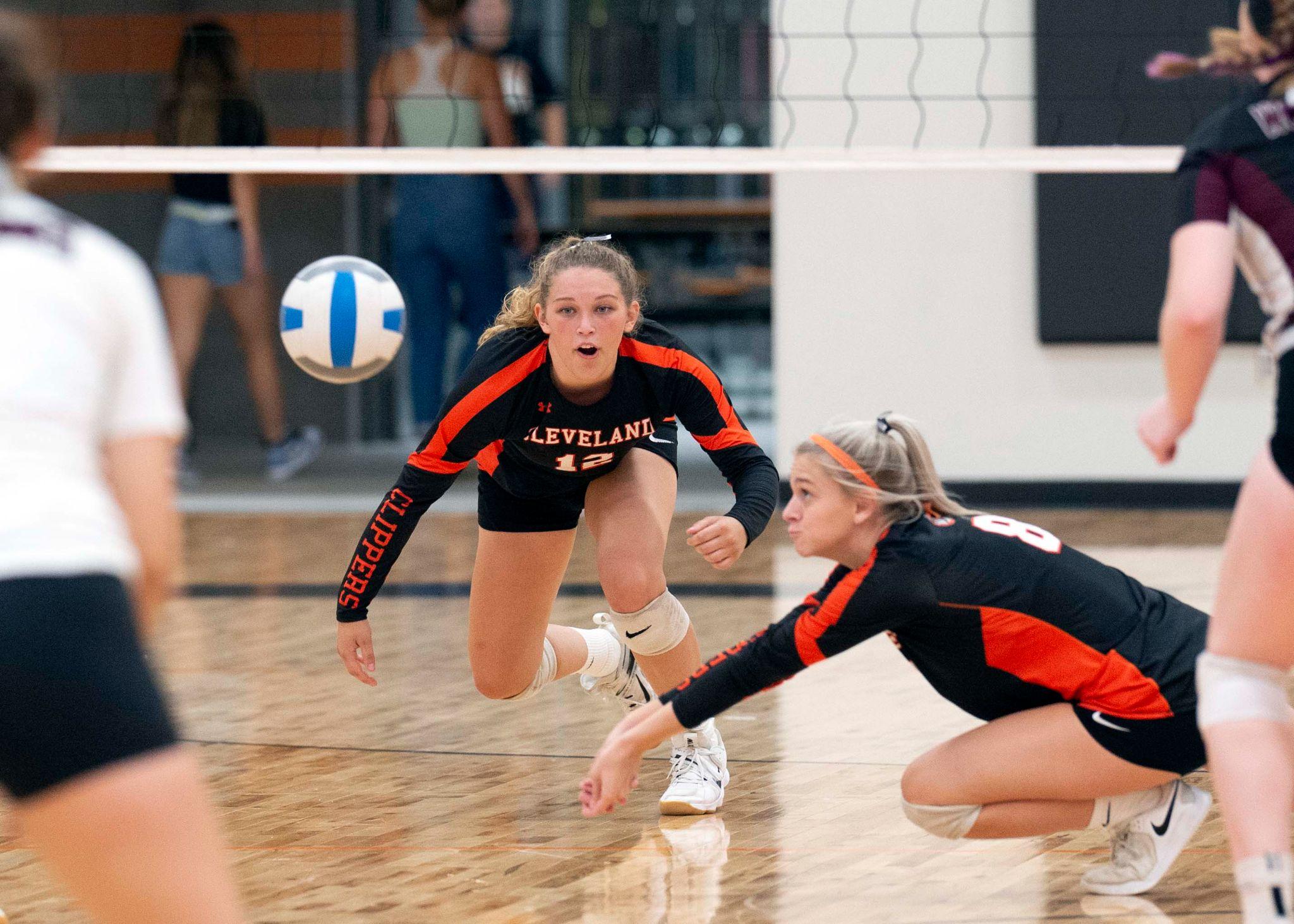 Jordyn Klingel crouches for a dig while Zoe Porter moves into the play. 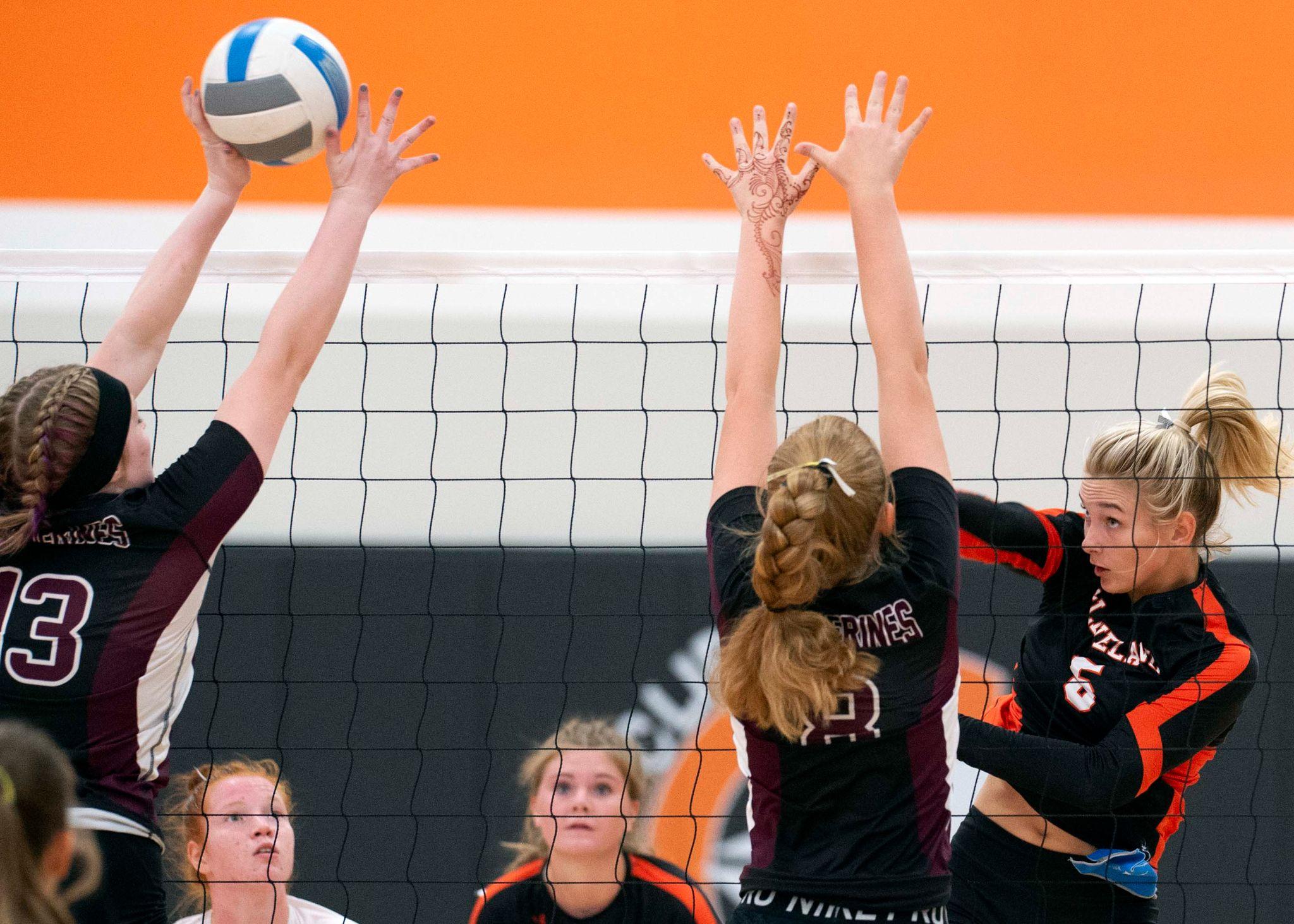 Taylin Gosch on the smash. 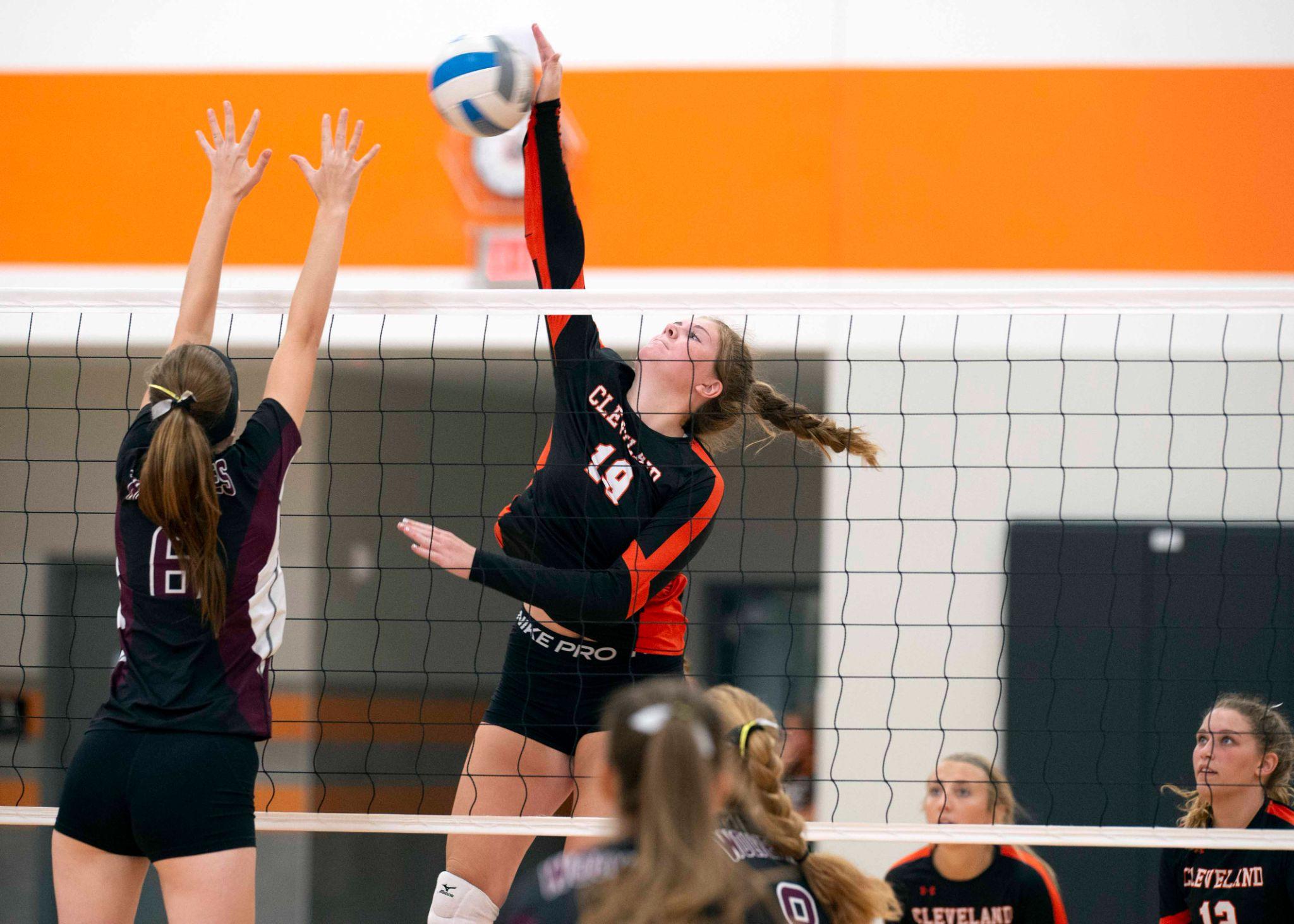 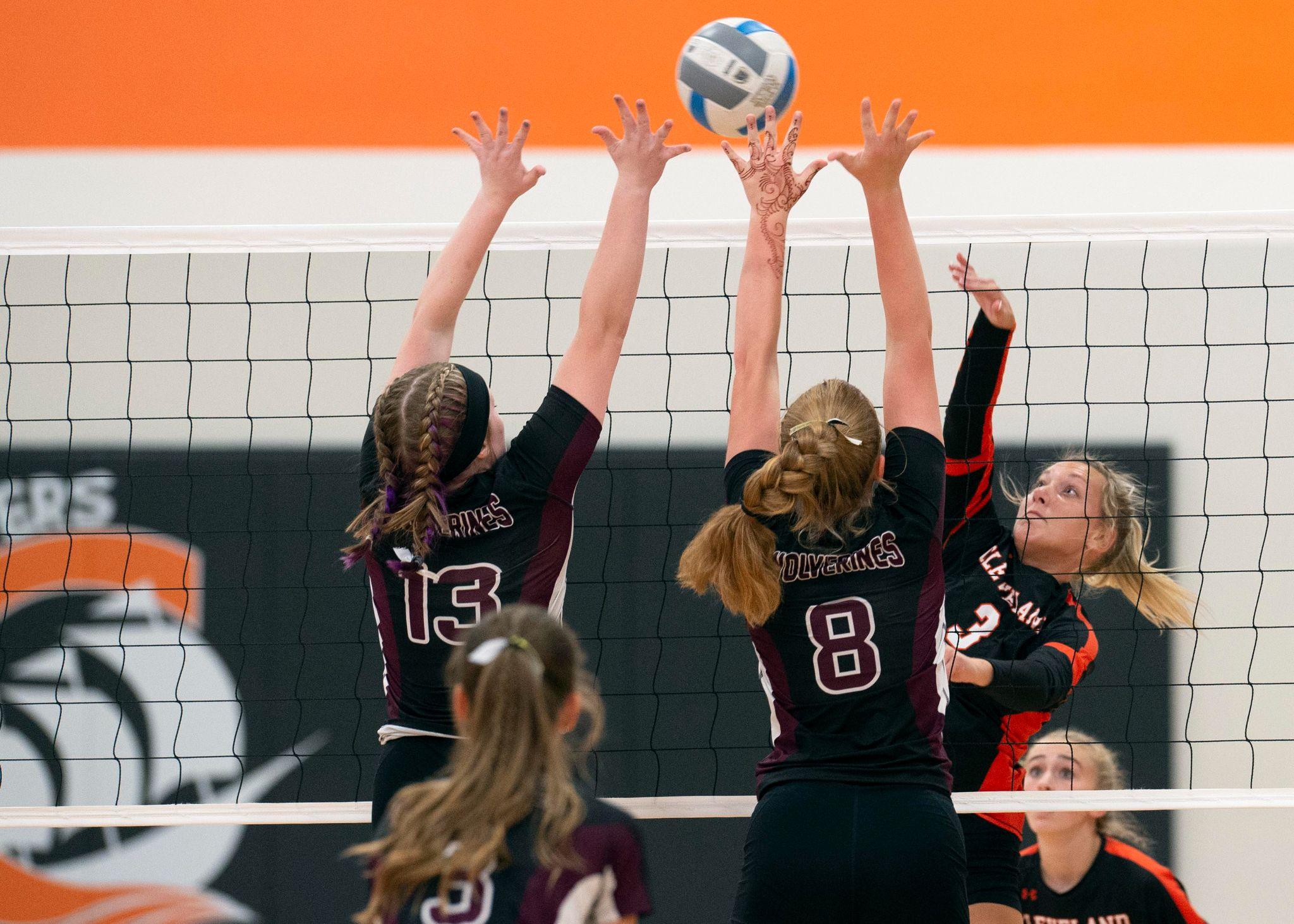 Maddy Steen follows through a spike. 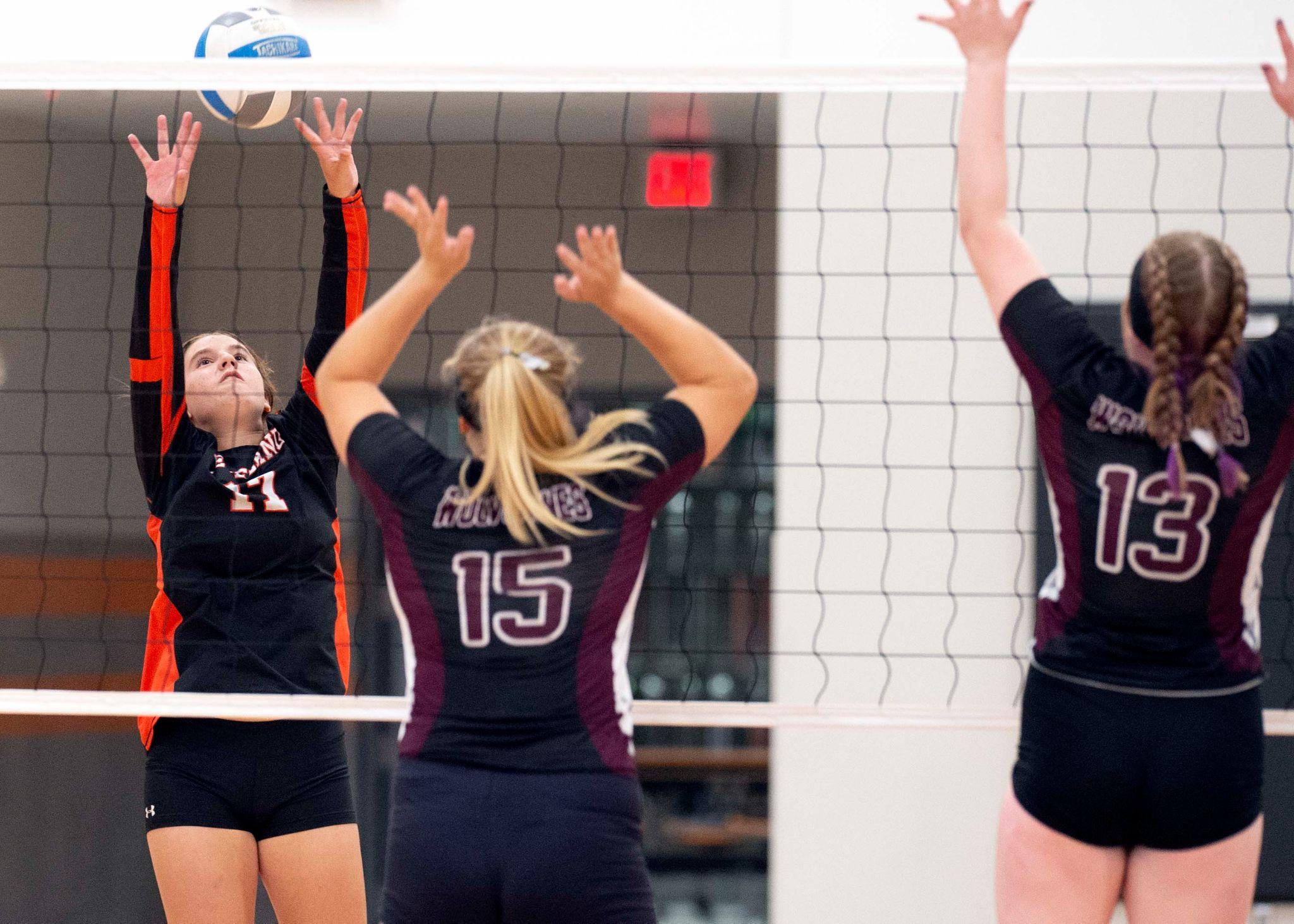 Sophie Perkins on the set. 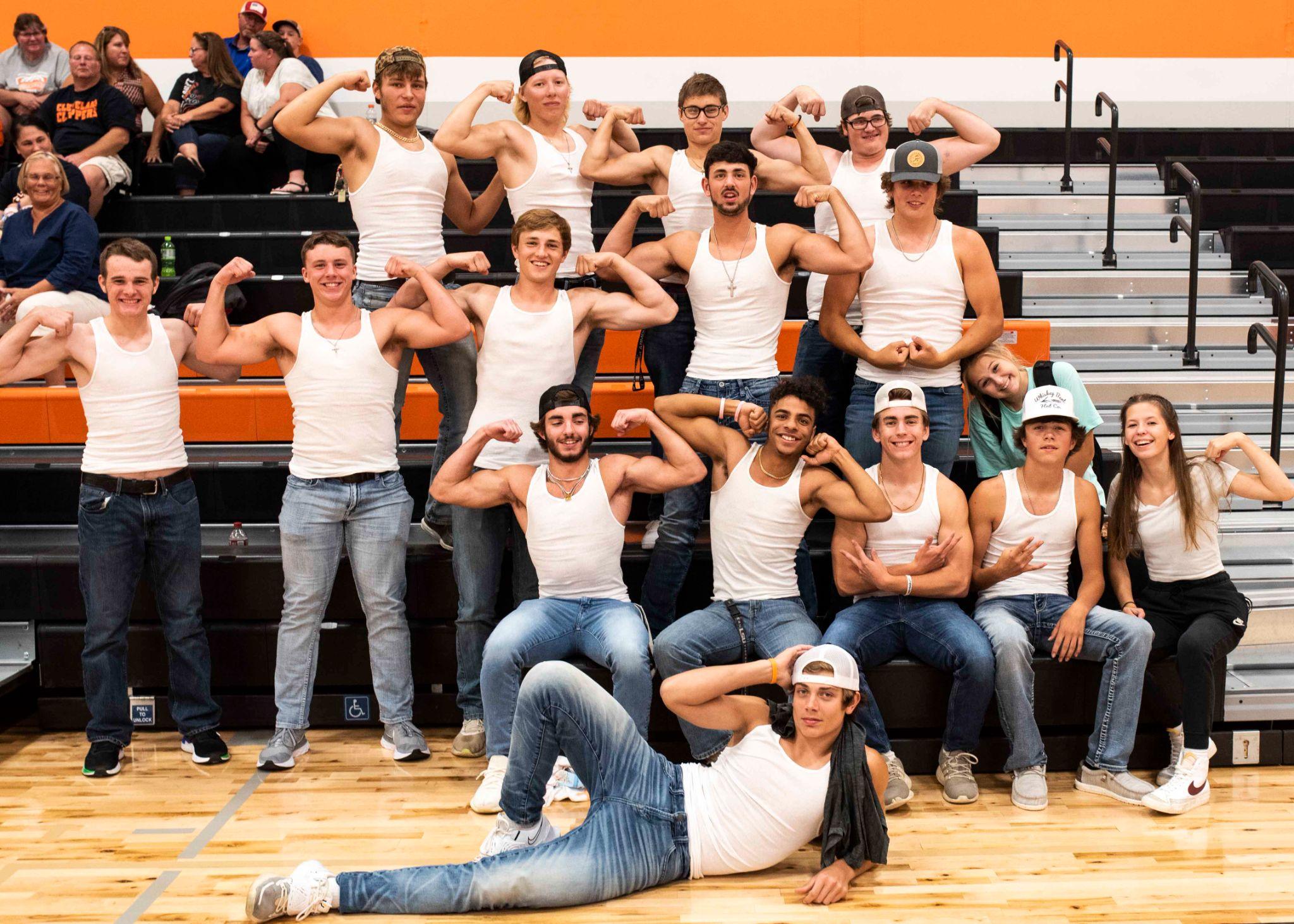 While the varsity girls flexed their muscles on the volleyball court, members of the Cleveland football team contracted theirs on the bleachers. They are, from L-R, front: Jackson Meyer. First row: Tommy Kennedy, Kaleb Timlin, Carter Dylla and Reid Knish. Second row: Colin Krenik, Tanyon Hoheisel, Jacob Anderley, Kolby Gens and Lucas Walechka. Back row: Fischer Knish, Cade Kriha, Braeden Hastings and Jay Pankratz. Getting in on the action as well were Jersie Kelley (front row, right) and Caitlynn McCarthy behind her. 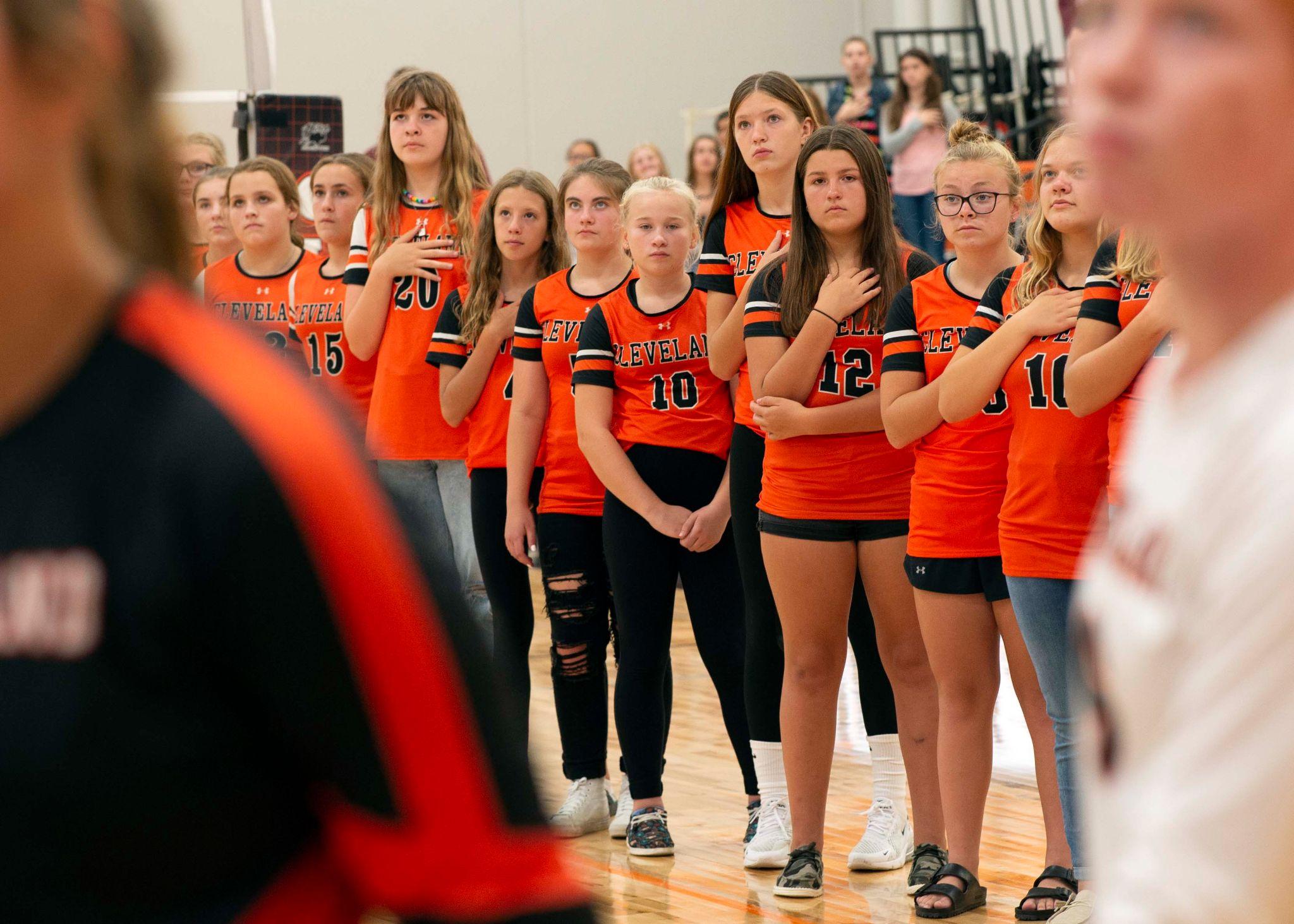 The match was also junior high volleyball night. Here, they stand for the National Anthem before being recognized. 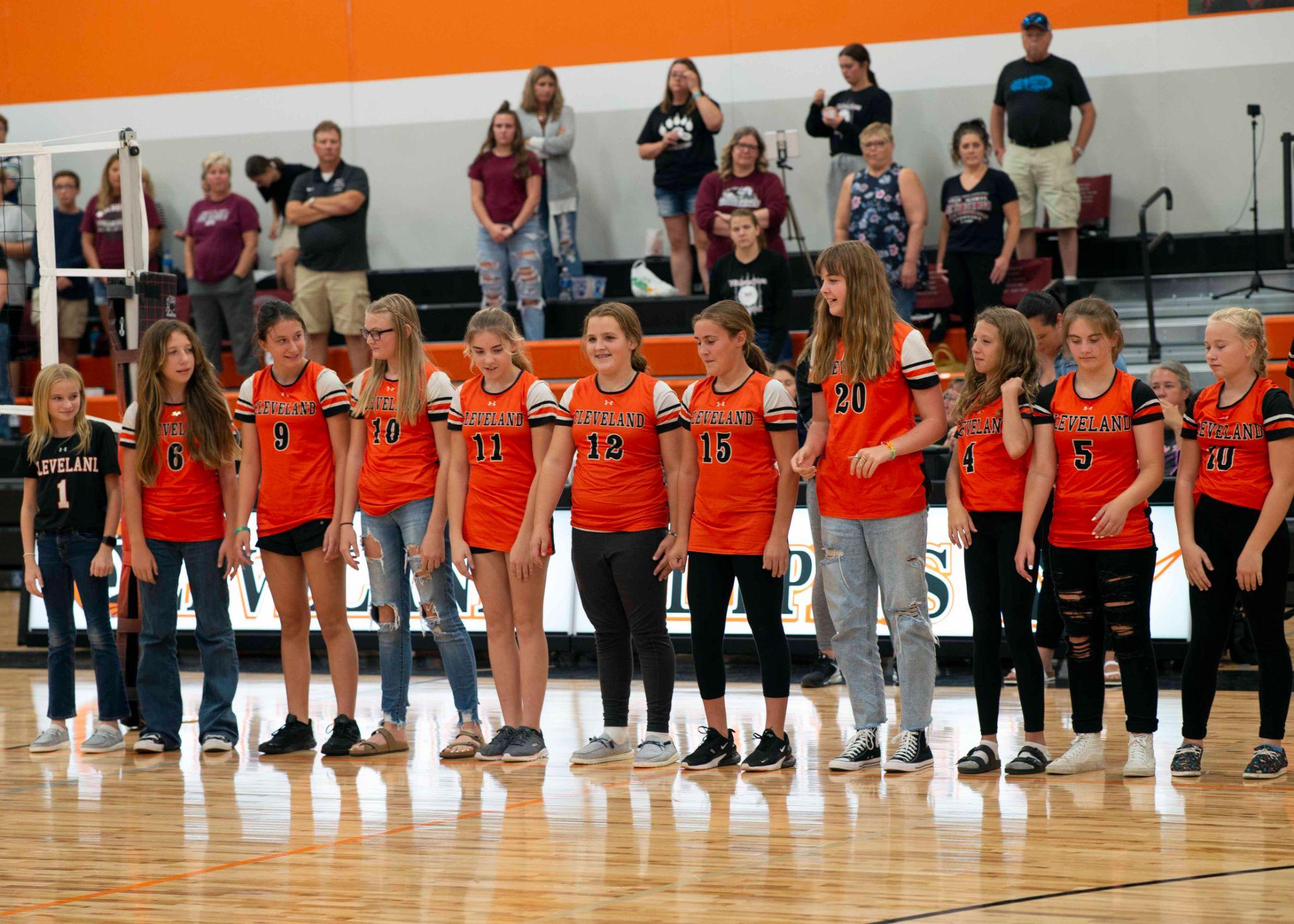 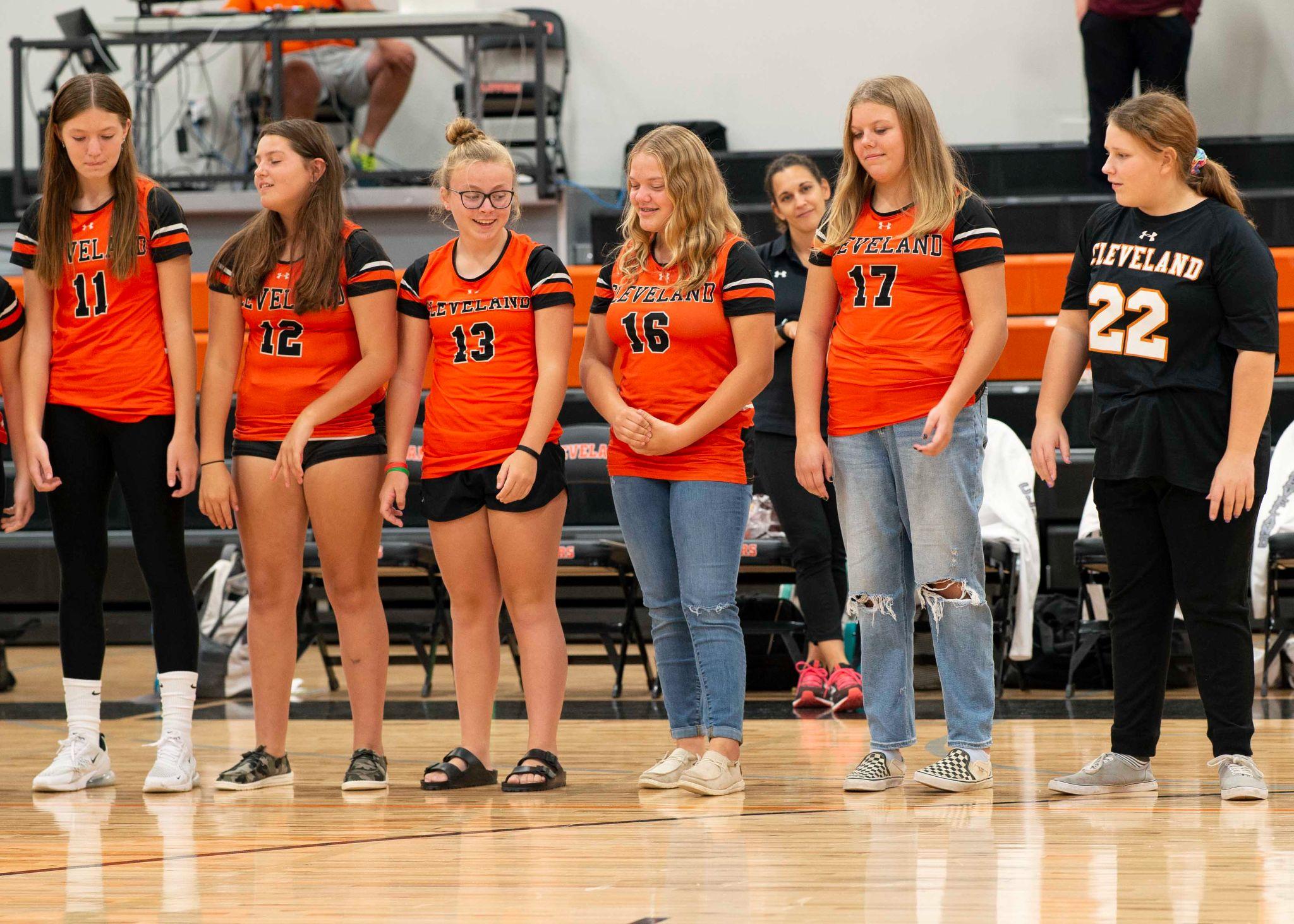 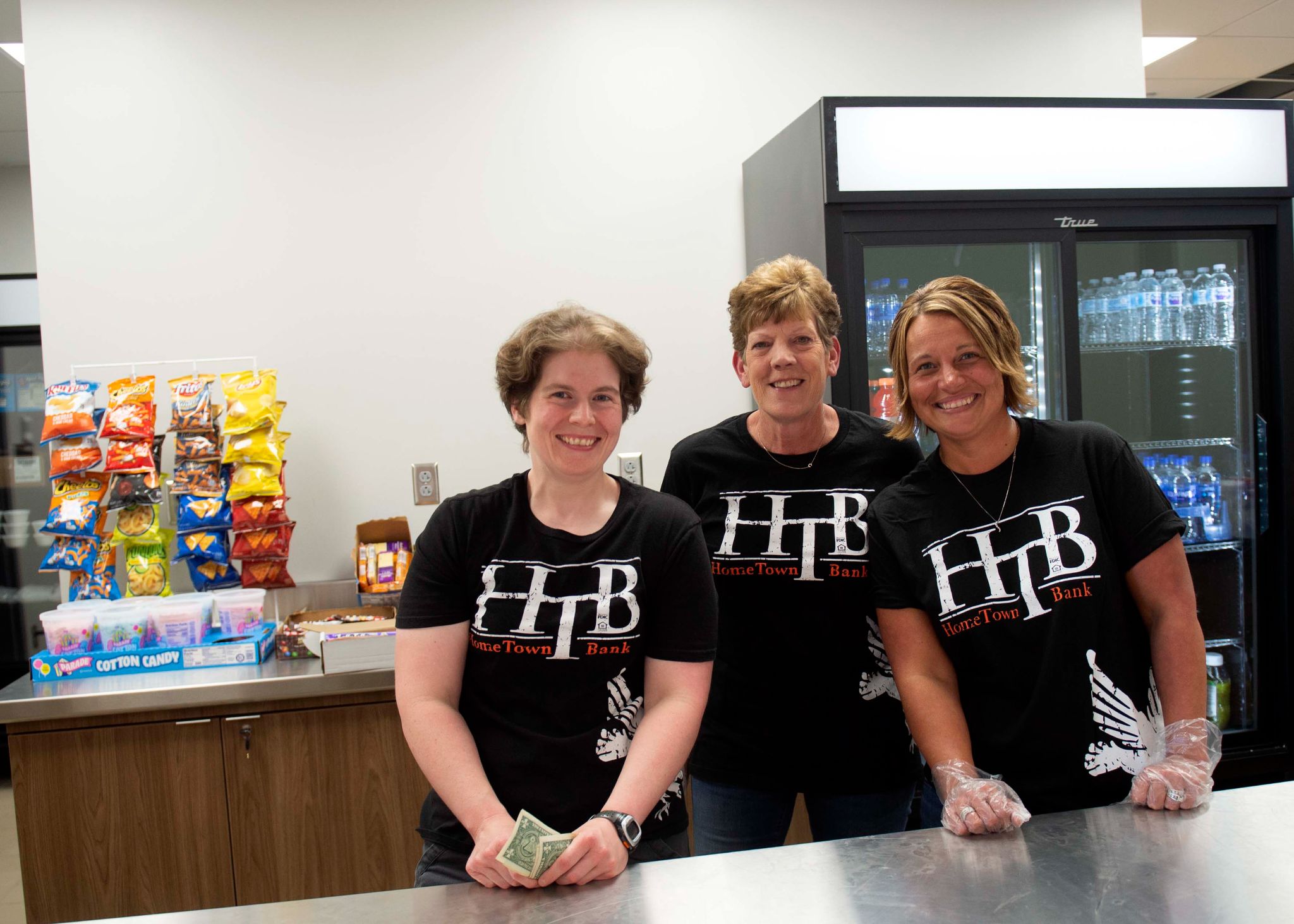 With Sally Haase, Jennie Stauff and Angie Knish behind the counter, buying a snack in the concession stand felt kind of like making a deposit at HomeTown Bank.