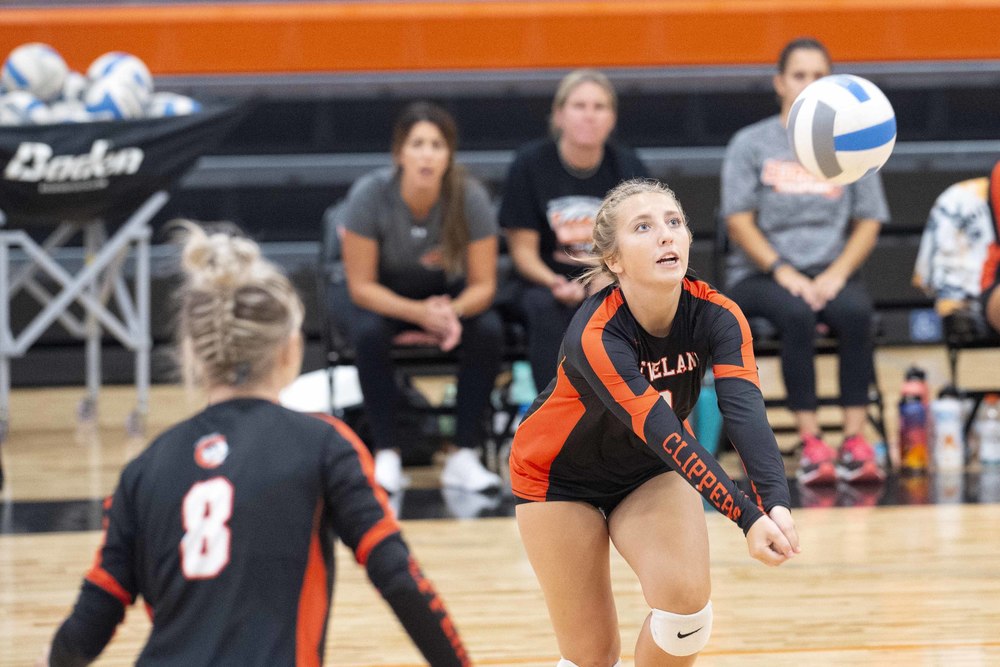 Above: Allison Jindra on the dig.

When it comes to the business of getting a volleyball from one side of the court to the other, Taylin Gosch is more than capable of going on the attack.

But she prefers to be the middleman.

Gosch has been the Cleveland’s starting setter for the past three seasons. This year, with an arsenal of skilled hitters to choose from, she has been passing the ball in a lot of directions.

“I love my offense this year,” said the senior. “They are doing such a great job.  I hate when people say ‘oh, she’s such a ball hog; she just sets to one person.’ I love to set to all the hitters, but I have to gain that trust before I can set. Last year, I relied on Halle (McCabe) and Emily (Kern), but this year I can rely on everyone.”

Gosch cuffs down a few hits too, but they are usually the result of a dig that gets too close to the net.

“I see videos all over of setters getting more kills than they usually do, and I wanted to try it myself. But some of the passes to me are a little tighter, so the kills that I have are mostly from tight passes that I can’t set out. Otherwise, I would be called in the net.”

Gosch completed 25 set assists on Thursday when the Clippers, now 4-0, swept visiting Nicollet in their first conference match of the season. Besides herself, seven Clippers had a mark in the kill column.

"The girls really came out to play tonight," said head coach Bree Meyer, "and Taylin really spread the ball around."

With the first set tied at 18, Jordyn Klingel spanked down a winner, and the Clipper never trailed after.

Emma Sweere followed up with an ace serve, and Ava Hahn’s ace tip put the Clippers up 20-18. The Raiders took point 19, but Harley Connor dropped down an ace block.

Cleveland’s next serve was over the boundary line, and Nicollet came up with a kill to pull within two, 22-21, but Grayce Kortuem slammed a kill, and the game ended 25-21 when a Nicollet hit sailed out of bounds.

With a couple big runs featuring a mixed bag of kills and ace tips, Cleveland easily won game two 25-15. Down the stretch, Kortuem lasered three kills, and, helped by the net, Sweere served up an ace to put the Clippers up 24-14.

The Raiders came up with a kill after that, but their next hit was out of bounds for the 25-15 Clipper triumph.

Game three was similar to game two. The Clippers never trailed. With a Kern kill, they led 22-14. Maddy Steen followed up with an ace tip, and Nicollet missed the next two kills, one in the net and the other out of bounds for a 25-15 final.

Kern had 10 kills. Kortuem had a PR high of nine kills.

“She was pumped,” said Meyer.

Gosch, Hahn and Connor  each had four kills. Klingel had two kills. Laci Hollerich and Maddy Steen each had one kill.

With a dozen misses, the Clippers didn’t have the best night behind the service line. Klingel sent over two aces. Kern and Allison Jindra each had one service ace.

Kern walled up a trio of ace blocks. Gosch and Steen each had one ace block.

The Clippers will participate in the Waterville-Elysian-Morristown tournament on Saturday. Their first game is at 8:30 am against TCU. 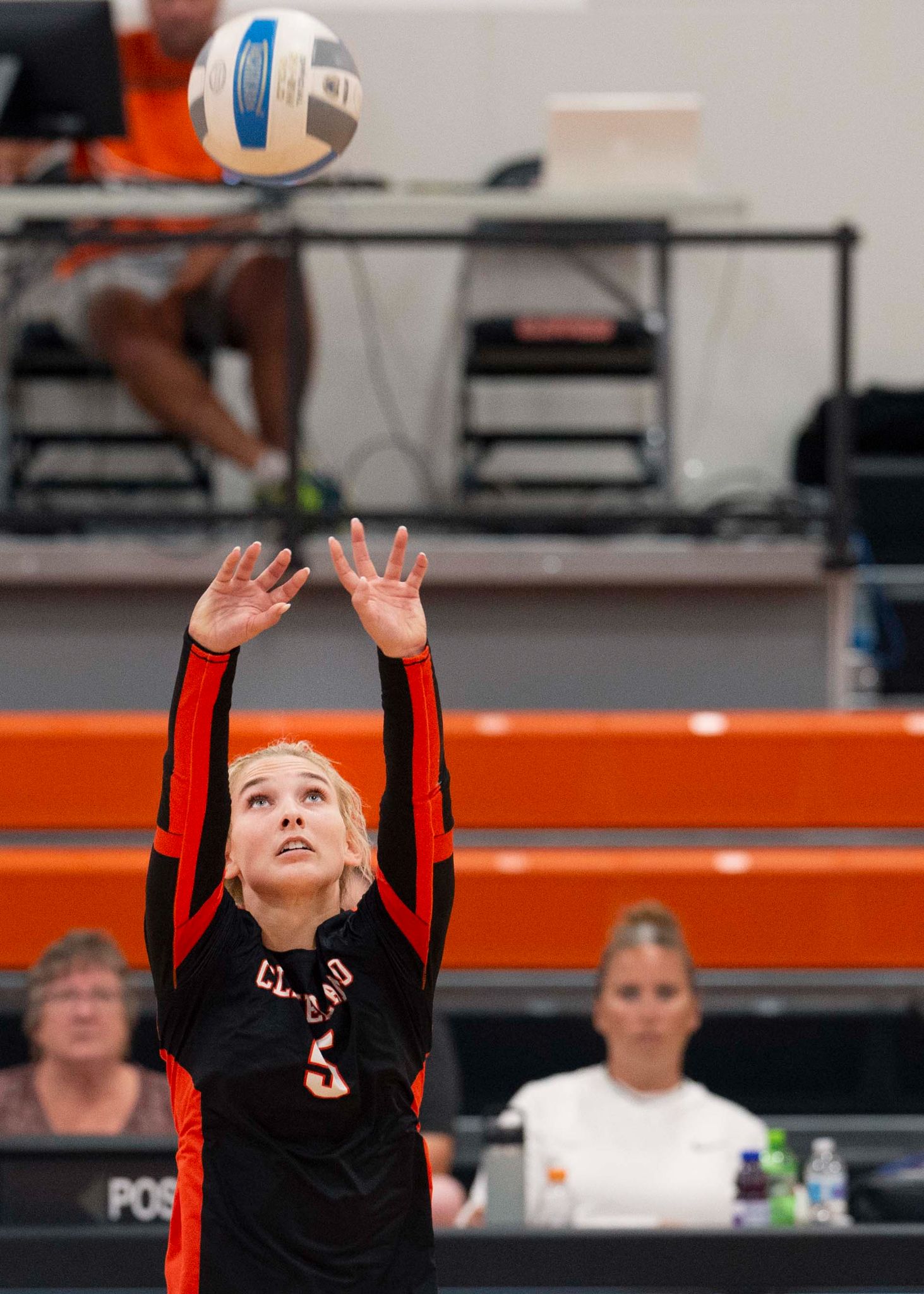 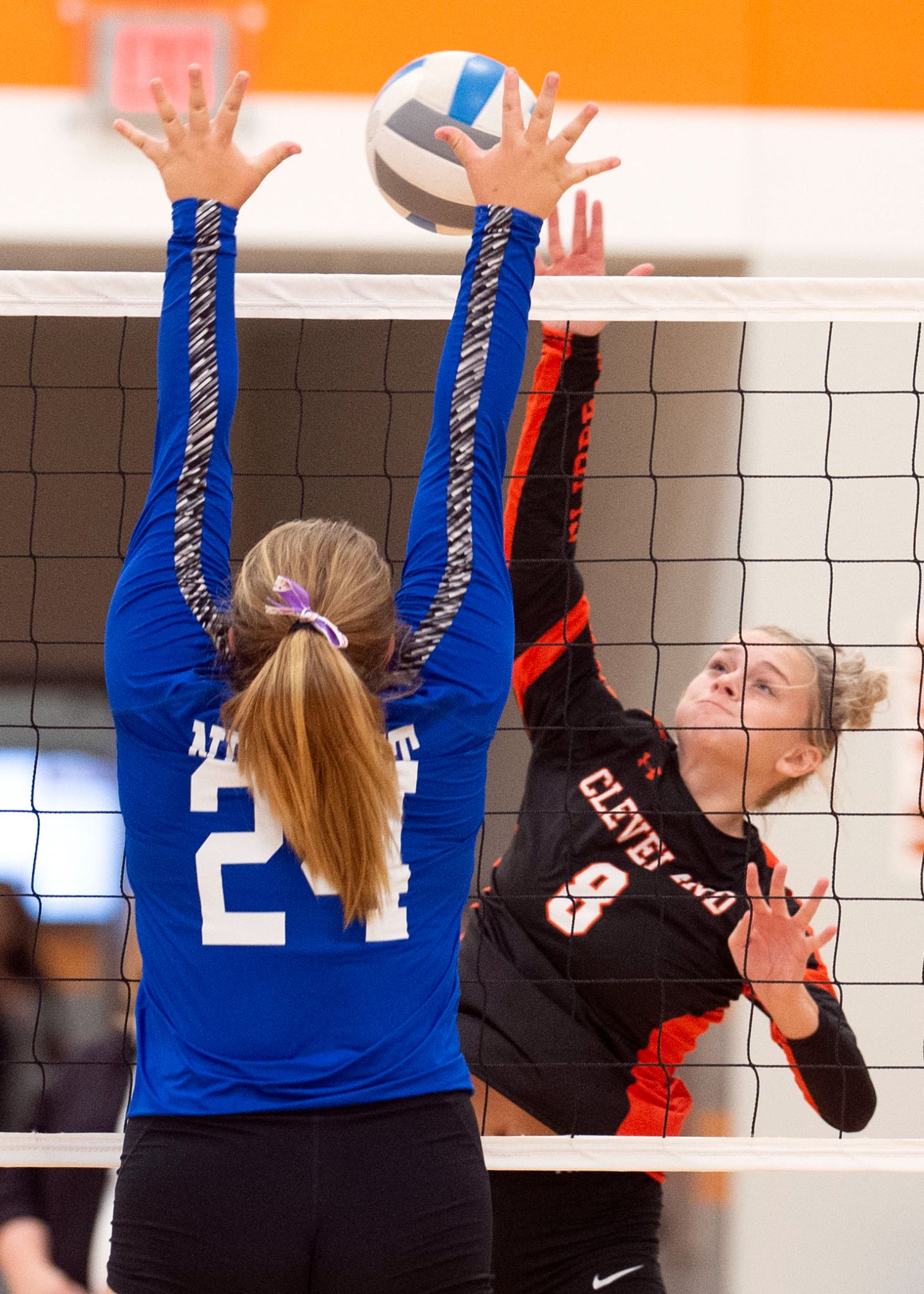 Jordyn Klingel pumps up the jam. 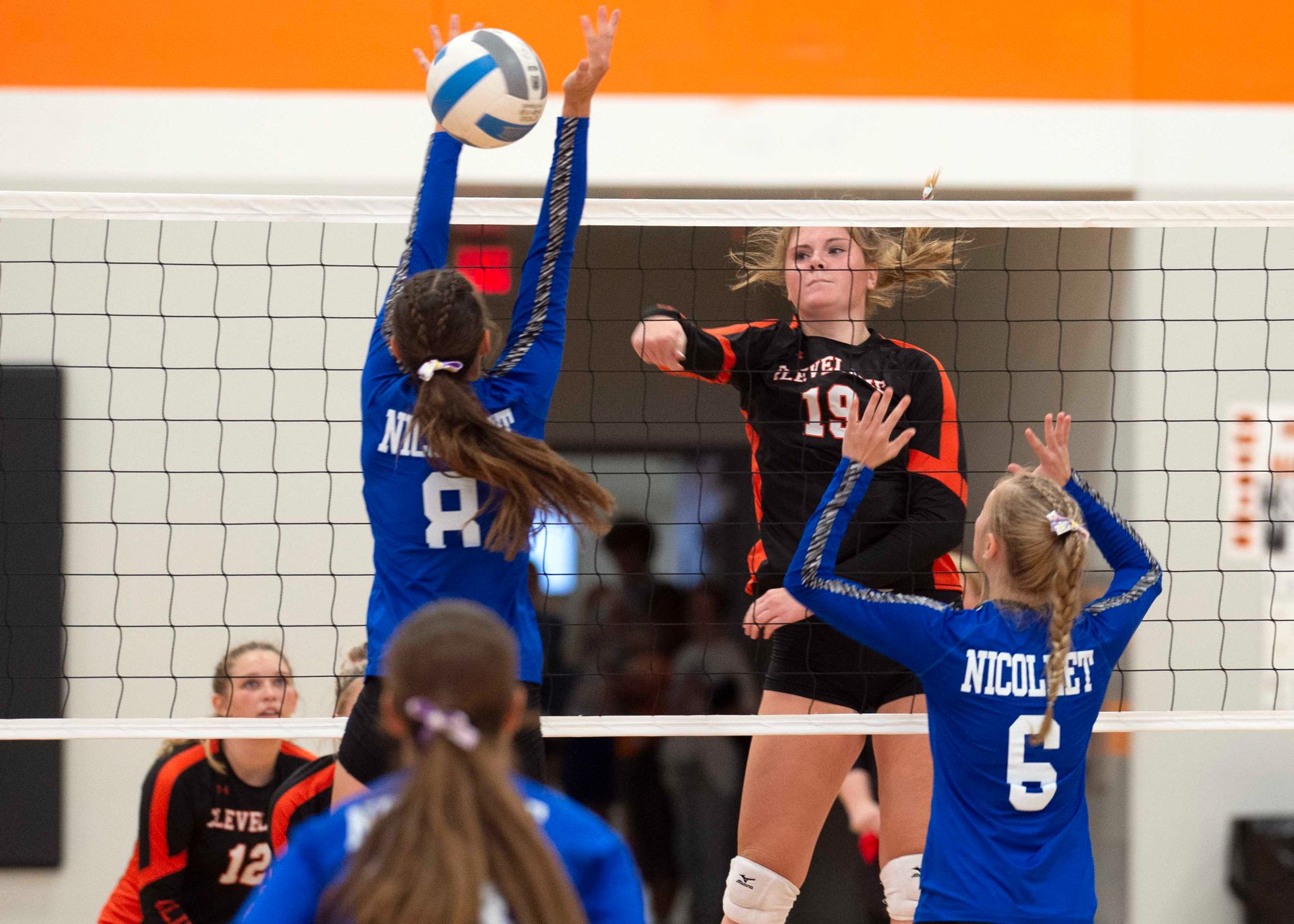 Emily Kern on the attack. 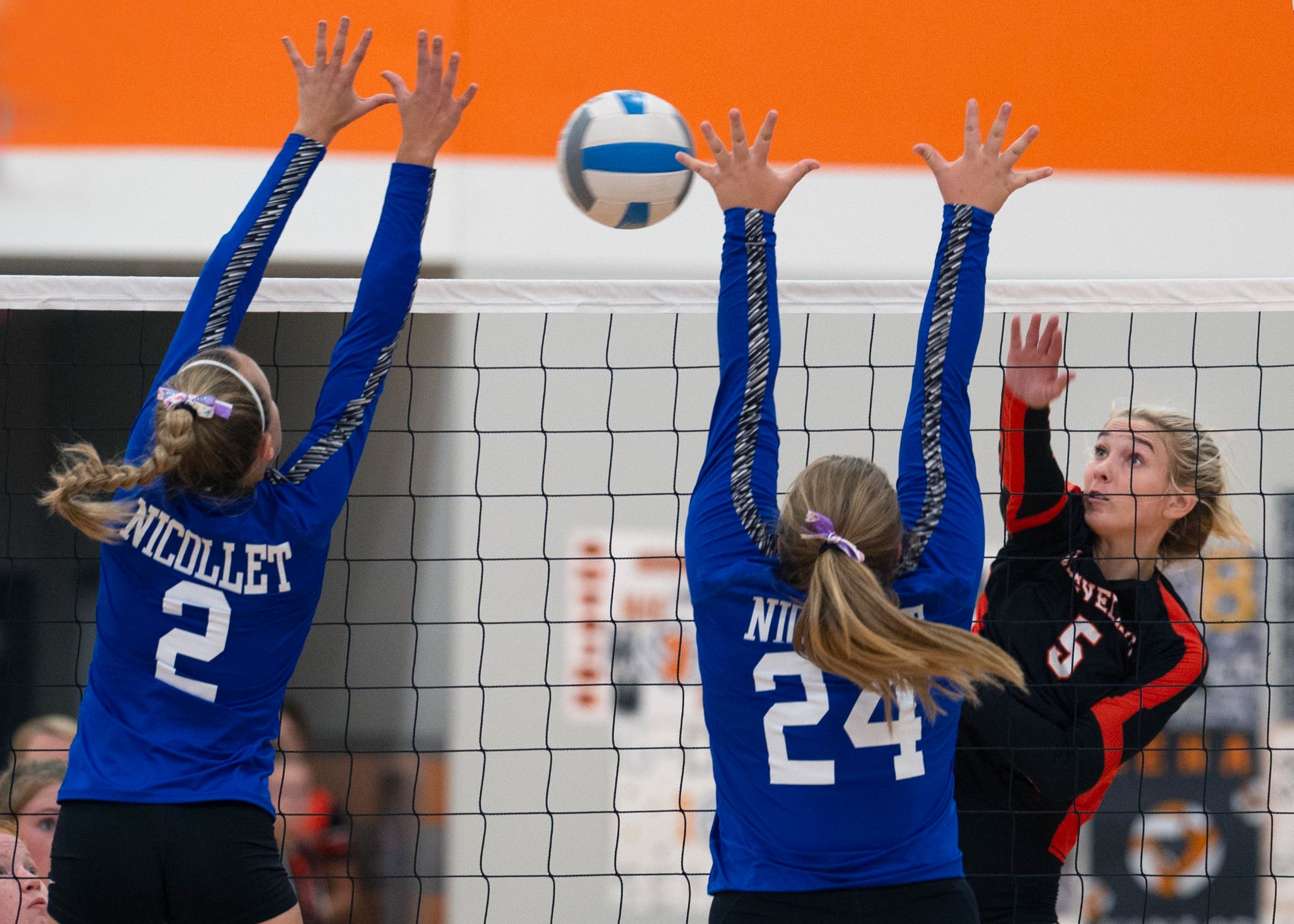 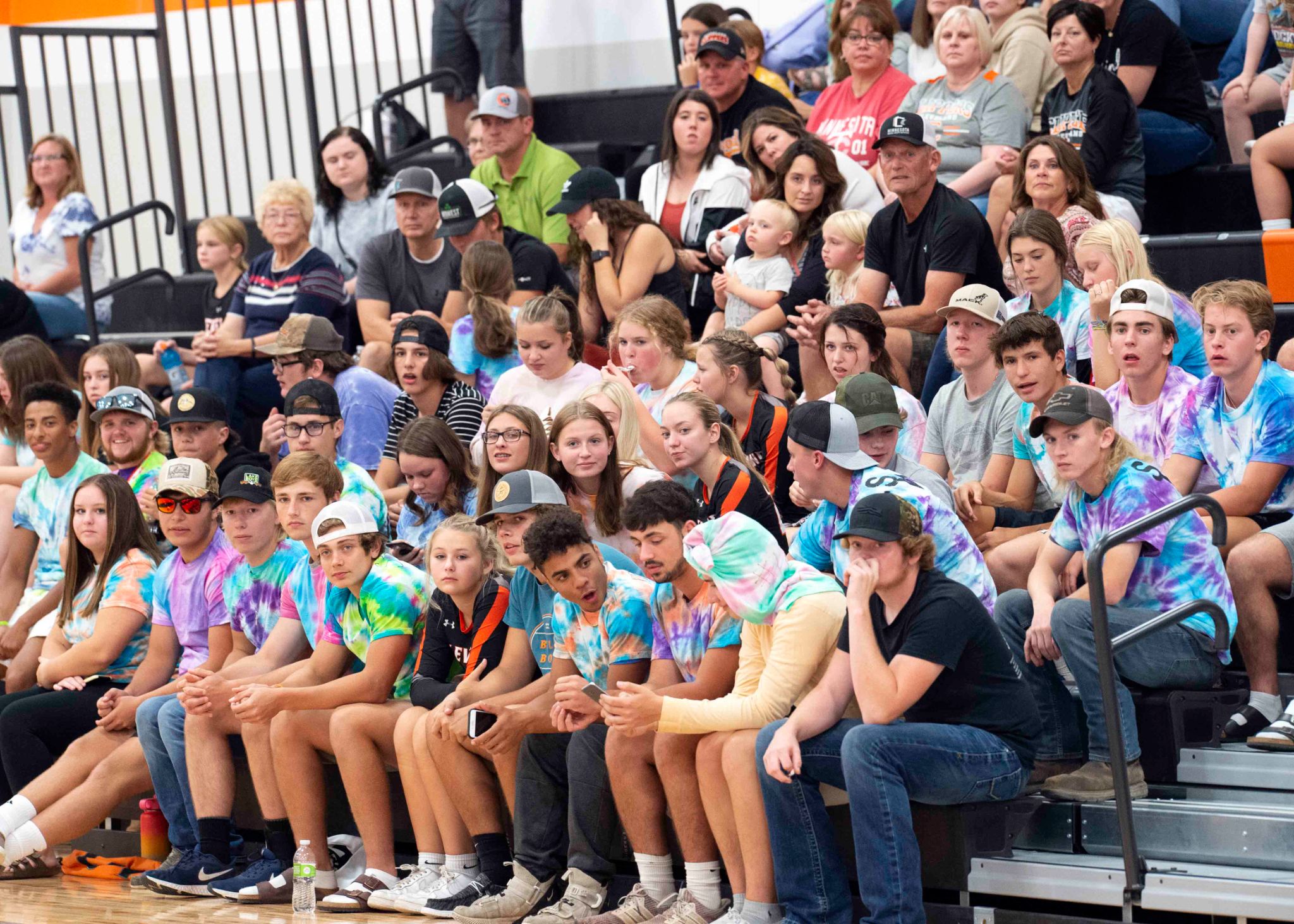 With the match being tye-dye night, it was a vibrant atmosphere in the gym.