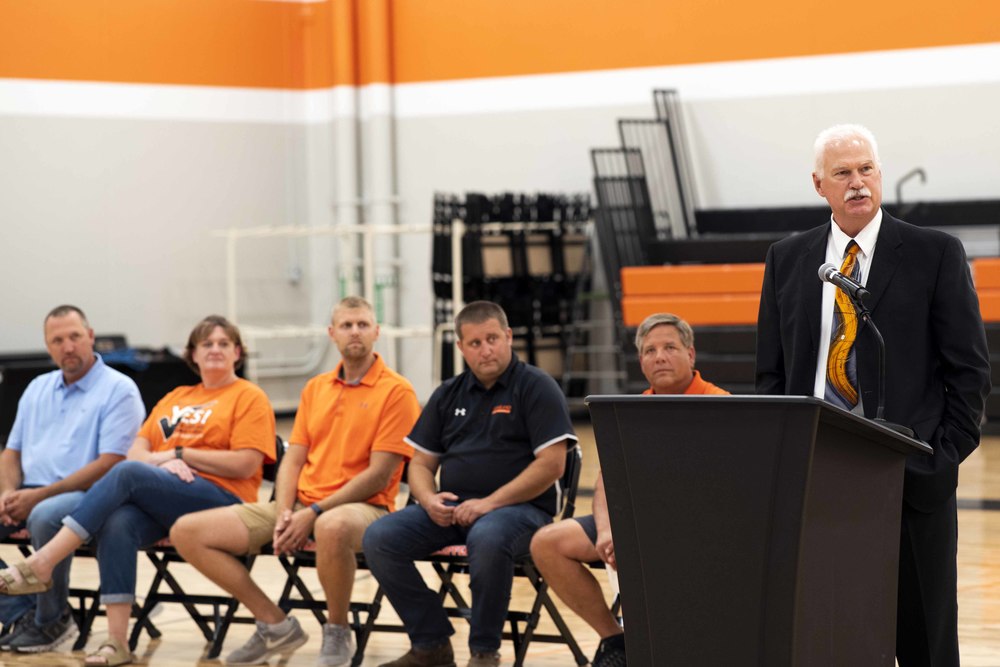 Much of the new Cleveland school addition has been in use since last spring, but at the end of the first week of the new school year and with the building now in full swing, a substantial crowd turned out for a formal dedication ceremony on Friday.

The 30-minute program was held in the addition’s gymnasium, located just off the entrance and commons area. Before that, dozens toured the new section, which also includes a mix of classrooms, a science lab, an art room, a STEM and Ag/Tech lab, a shop, a band room, a cafeteria, a weight room, locker rooms and spacious commons.

After Principal Scott Lusk welcomed the crowd, Superintendent Brian Phillips talked about being interviewed for the job by school board member Myron Wolf back in 1996. When it came time for Phillips to pose some questions to Wolf, he asked him how long he thought Cleveland school would be around.”

“For sure five years,” Wolf replied, “after that, anyone’s guess.”

But the school kept going, and later Wolf became a conduit of information between community and school. When he was downtown for coffee, Wolf would hear scuttlebutt, talk to Phillips to get information “straight from the horse’s mouth,” and take Phillips’s perspective back downtown to “set them straight.”

Phillips said Wolf was a sounding board for him as was his wife Connie Phillips and School Board Chairman Ron McCabe, whom he introduced.

McCabe talked about the three attempts to get the bond referendum passed.

“The first one, crash and burn. Bad bet. The second one we thought we had it going and realized it wasn’t going to be, and after that one, we had to regroup and lick our wounds.”

McCabe said that shortly after the second referendum failed, he got a call from community member Ken Baker.

“Ken got a few of the farmers together and wanted to talk to us, and I’m thinking ‘there’s a lynch mob.’ So Jeff (Robb) and I met with about 10 of the local farmers, and it was an eye-opening experience because there was a lot of non-truths out there, and we realized we needed to get information out to the public on what we were trying to achieve, so we took that information and worked hand-in-hand with the farmers, which helped us out tremendously.”

So finally, the $14.4 million for classroom additions, a cafeteria, and labs passed by over 200 votes while the second part of the referendum, for a gymnasium, locker rooms, mechanical room, and a weight room, all for $5 million, was voted in by 35 votes. The project broke ground in late May of 2019.

McCabe went on to introduce Heidi (Voit) Wobbrock and Jeri (Thieman) Miller, leaders of the Next 100 Years Committee. Formed after the second referendum went down, the group was dedicated to promoting awareness of the school’s needs and to encouraging the community to vote for the project.

“I look back at the small team we started with and all we accomplished in just a few short months, and it just amazes me,” Wobbrock said. “Along the way we were faced with some great challenges and some uncomfortable moments, but in the end the rewarding experience of bringing our community together and ensuring that our school and our town will continue to grow and thrive made it all worth it. We are proud to be standing here today to see the fruits of our labor…but it was all of you rallying together and showing up to vote that made the difference.”

“Without your time and dedication we wouldn’t be standing here today,” she said. “Each and every one of you made a difference, and because of you, Cleveland school's legacy will live on for years to come.”

In his closing comments, Phillips recalled the program used during the dedication of the 1991 addition. There were 68 school teachers and staff listed on the program’s last page, he said.

“My point is, we can build beautiful buildings, and we did. This awesome building will generate a lot of excitement and offer opportunities and programs for our students. It’s an awesome thing for our community, and we couldn’t be prouder. But keep in mind, it really is the people who are the heart and soul of this place. It’s the people that we hire who dedicate their lives to working with the children who walk through our front doors...and we do an amazing job of taking care of the students.”

Recalling Miller’s speech, Phillips said he appreciated being part of a school with a rich history that began in 1858.

“You know, the names of teachers and staff may change, but the word ‘legacy,’ which was used just now, it’s true. This place is special and has a legacy, and that legacy lives on. So I stand here like the rest of the people in front of you, humbled and thrilled, definitely proud, but especially grateful, and I’m grateful…for having the opportunity to be part of this legacy.”

Wrapping up, Phillips thanked all those who made the new addition possible.

“I want to thank those who supported the bond, because without their dedication, their commitment, their perseverance, and their encouragement...and what I mean by that is that there were times after several failures that I would be extremely discouraged, and I had some wonderful people who came to me and said ‘let’s get back at this. This is no time to feel sorry for ourselves,’ and I truly thank them for that. I do thank the people who supported with their taxes. It’s a commitment. We knew we were going after a big chunk of money to do this, but we had a strong vision, and it was very well supported in the community.”

Phillips noted the plaque that dedicated the new building thanked the Next 100 Years Committee.

“That is a symbolic thankful to all the committees. There were others, which is a huge list of men and women who participated.”

Before the ceremony, there was a picnic in the parking lot, complete with food and kids games. 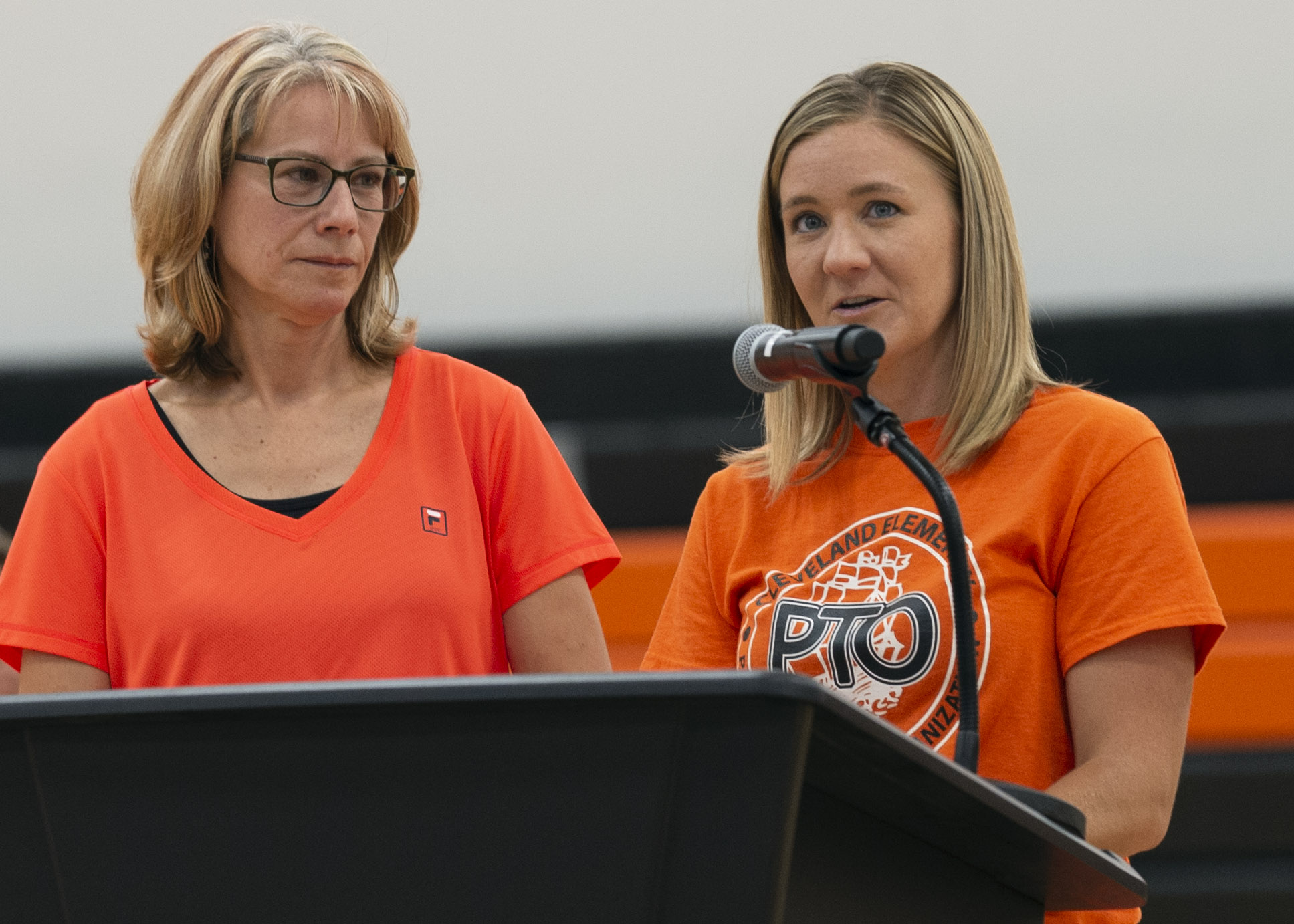 Next 100 Years Committee leaders Jeri Miller and Heidi Wobbrock were guest speakers at the dedication ceremony. 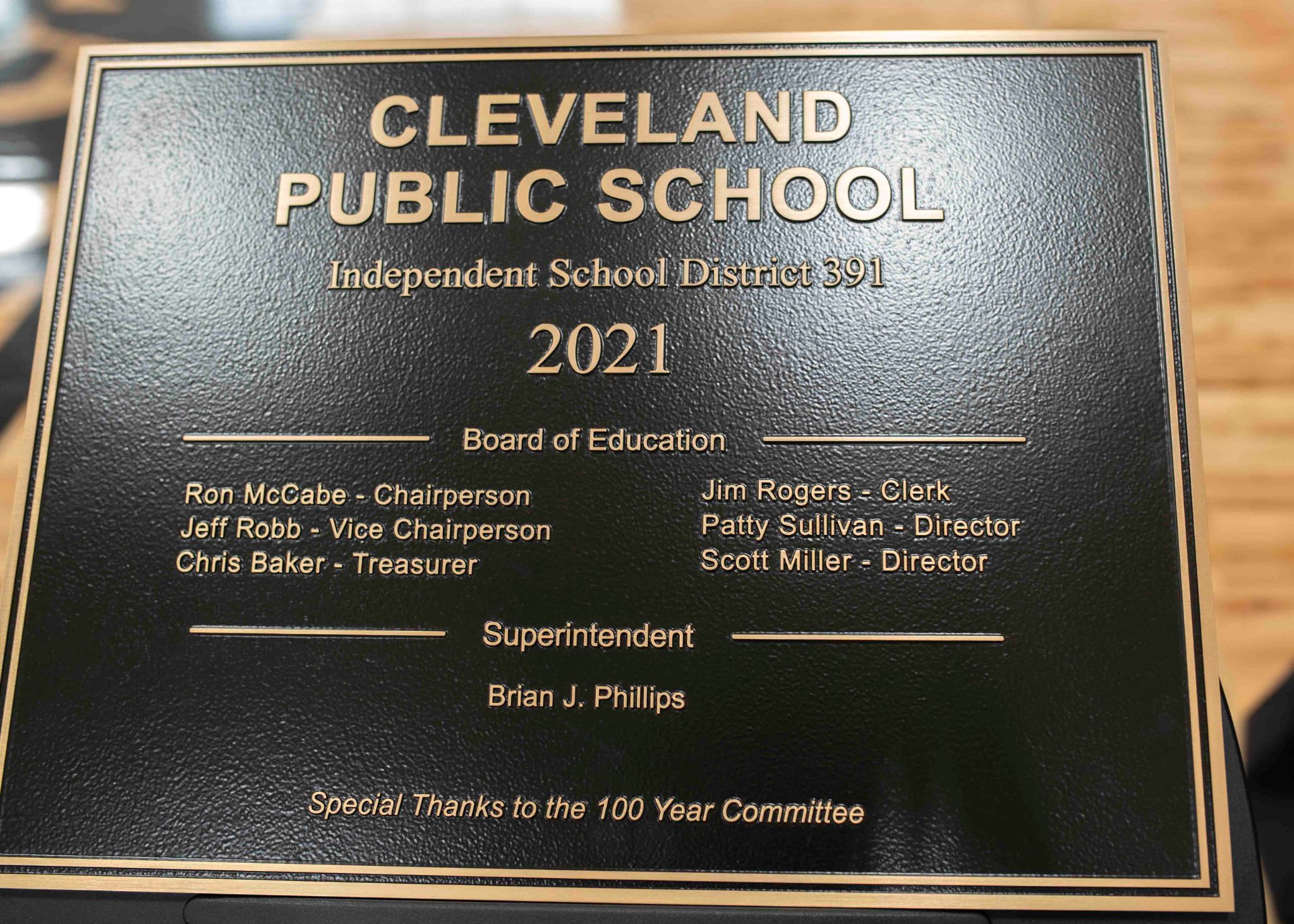 The dedication plaque will be hung in the commons. 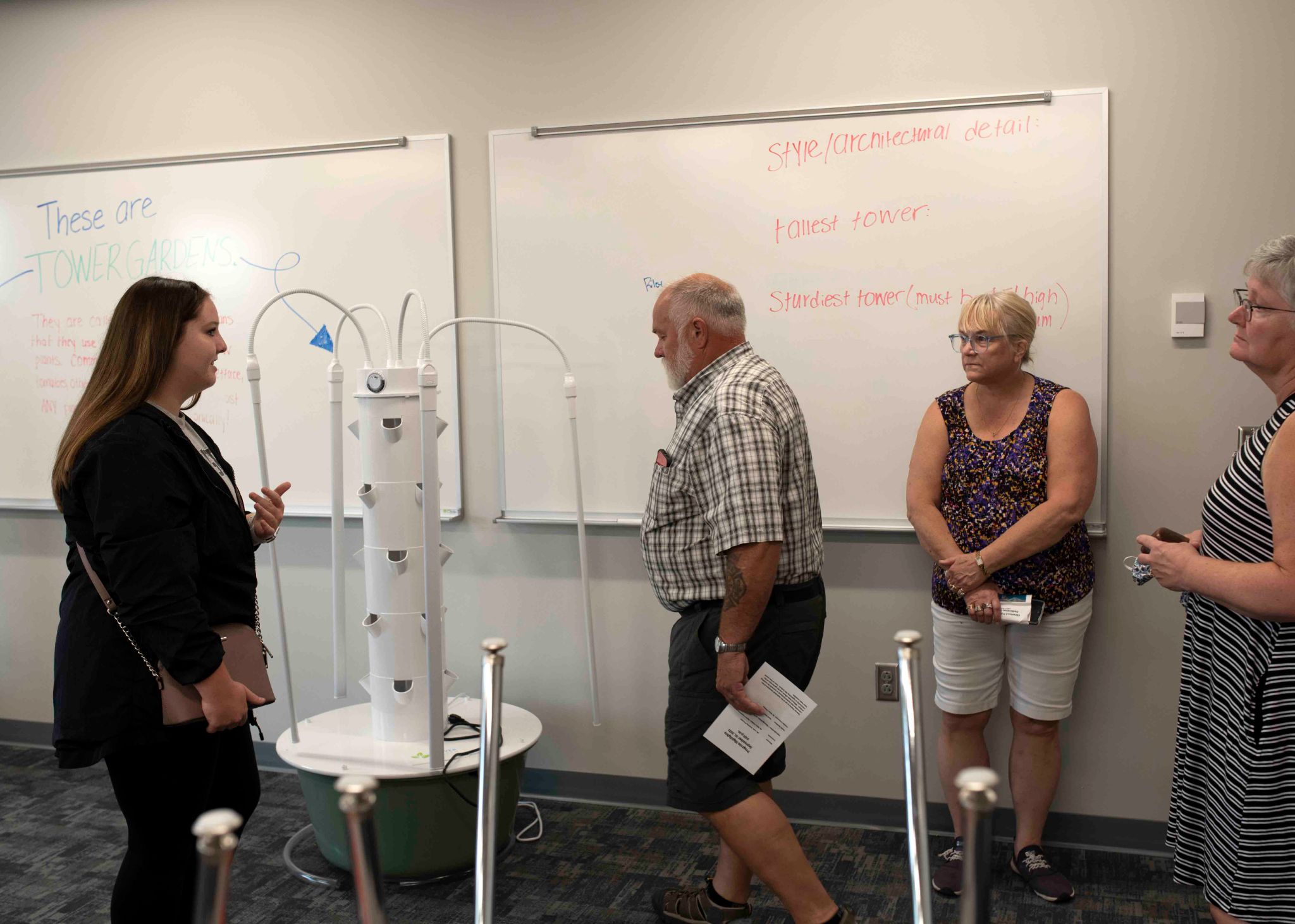 Student tour guide Ashley Connor (left) shows her tour the hydroponic tower gardens in the agriculture and STEM lab. The towers are used to grow plants, like vegetables,  in water instead of soil. 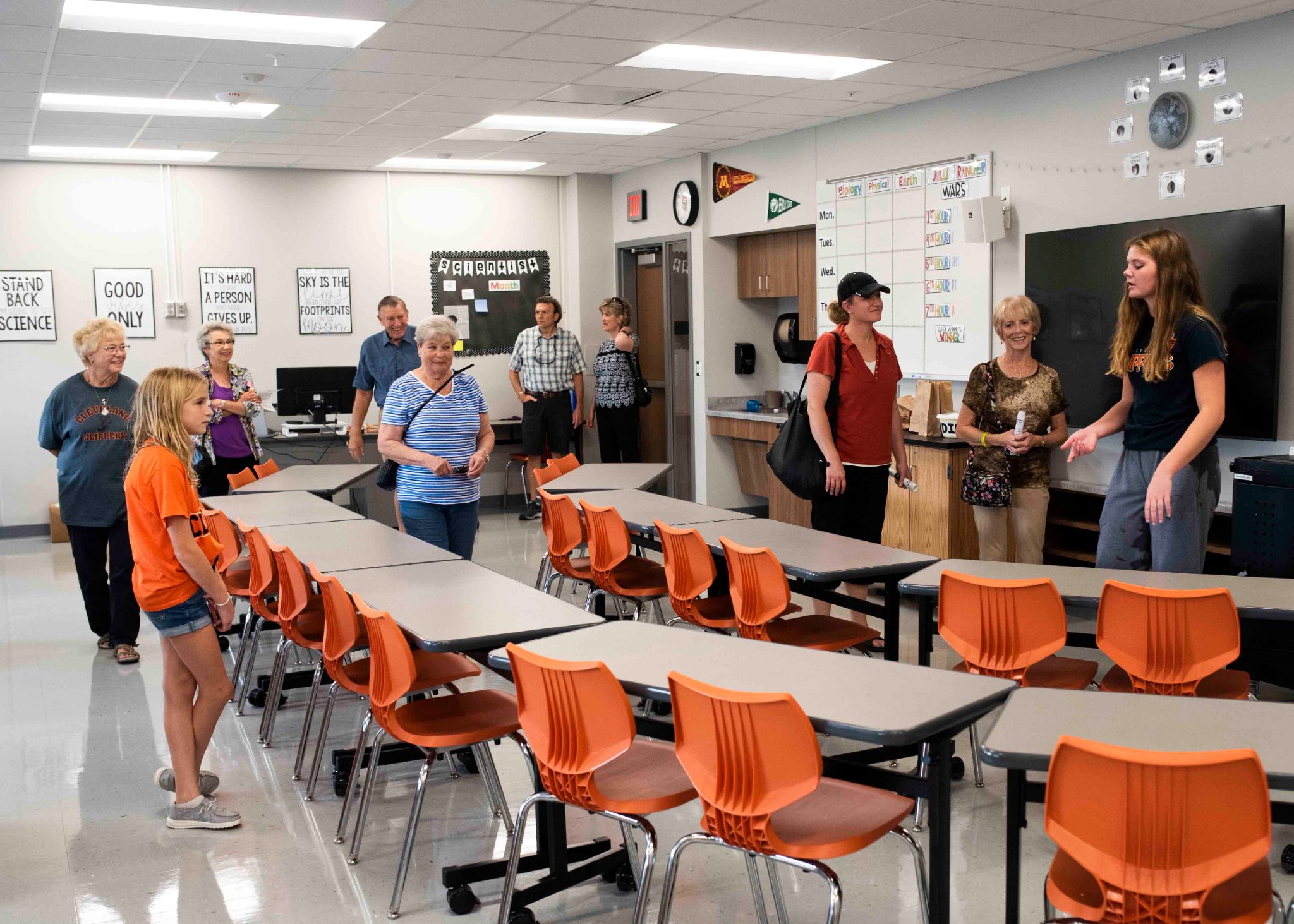 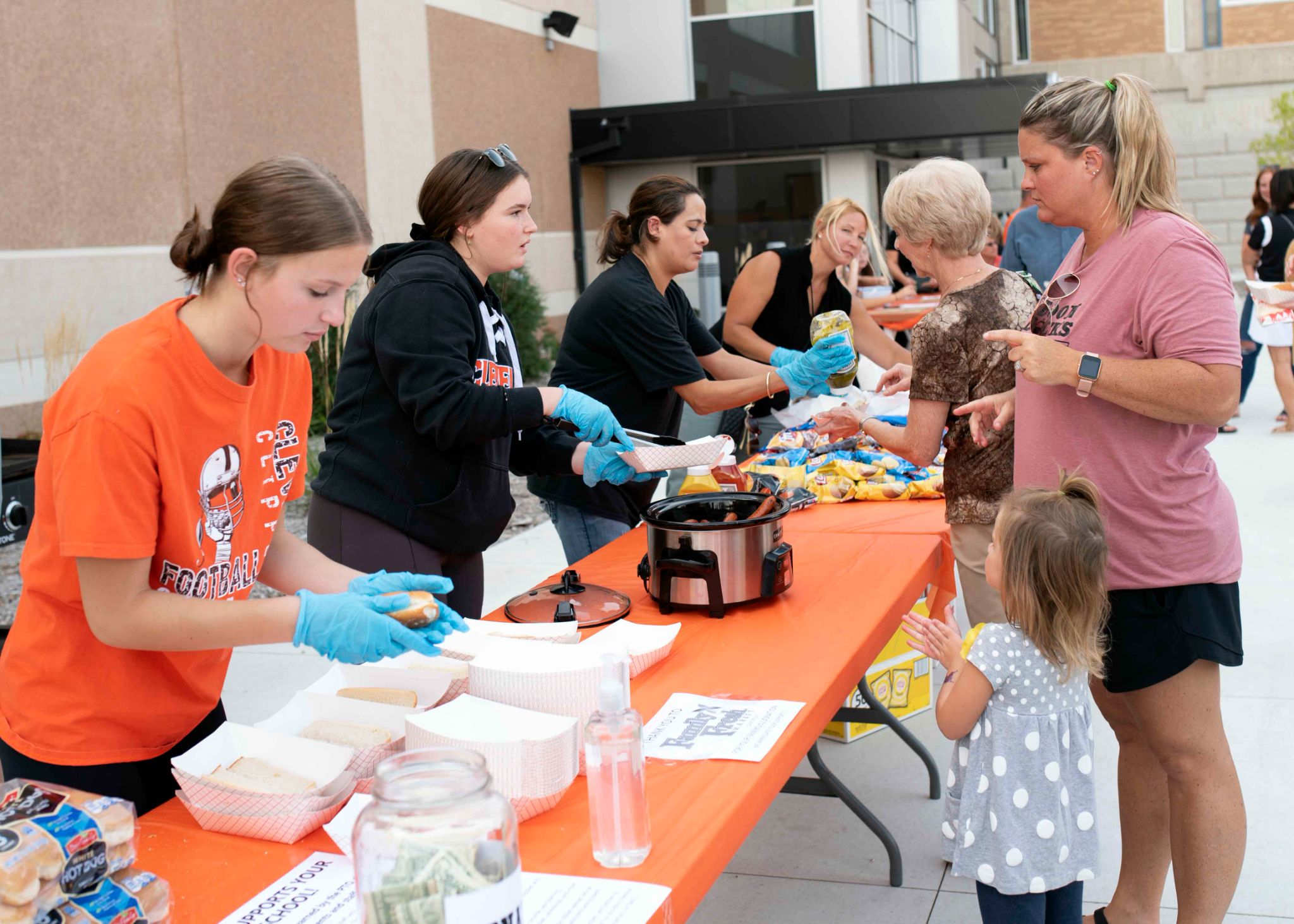 Outside in the parking lot before the ceremony, volunteers served a “picnic” dinner. In front is Alana Hartman. 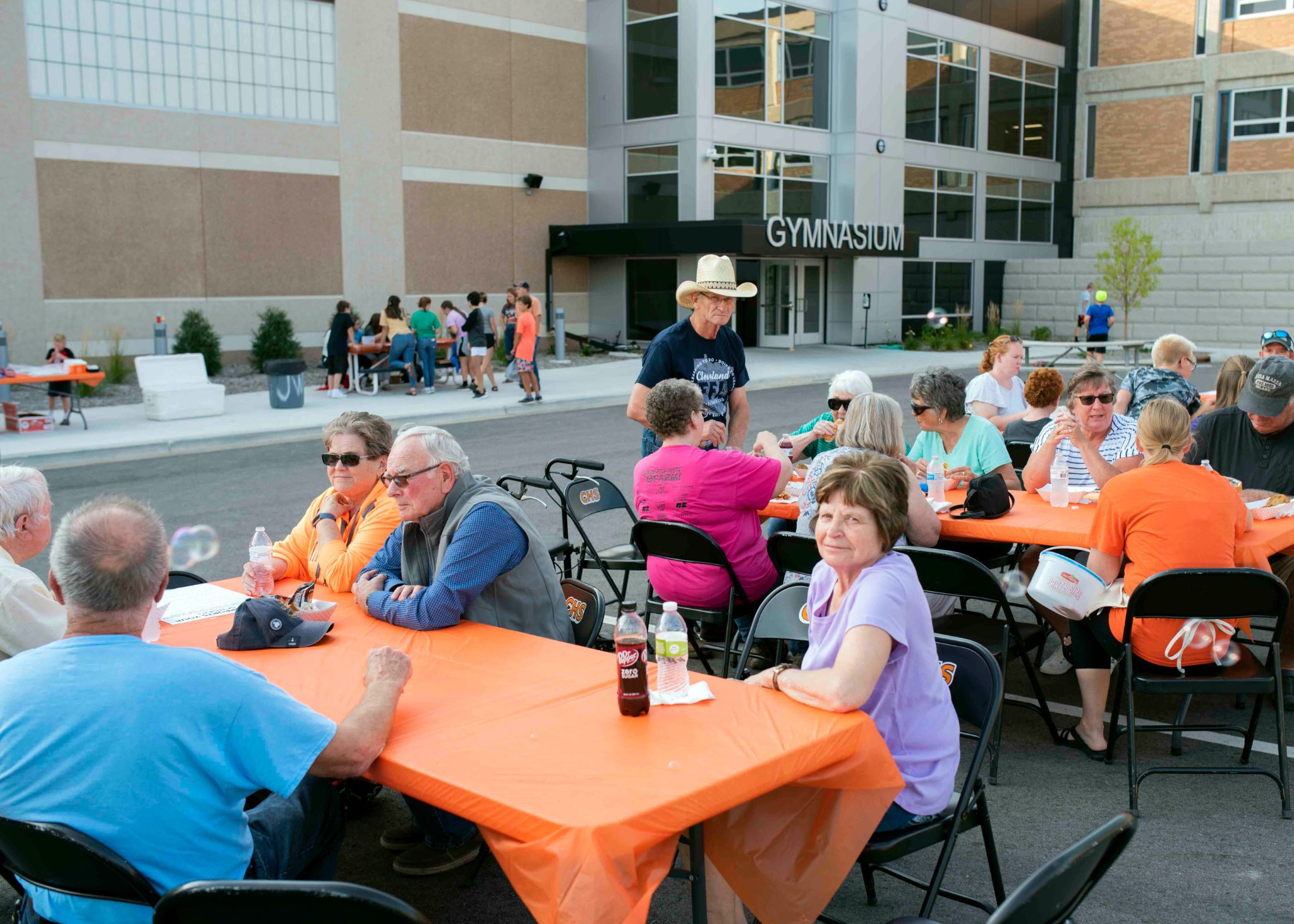 Picnic tables in the parking lot filled up throughout the evening. 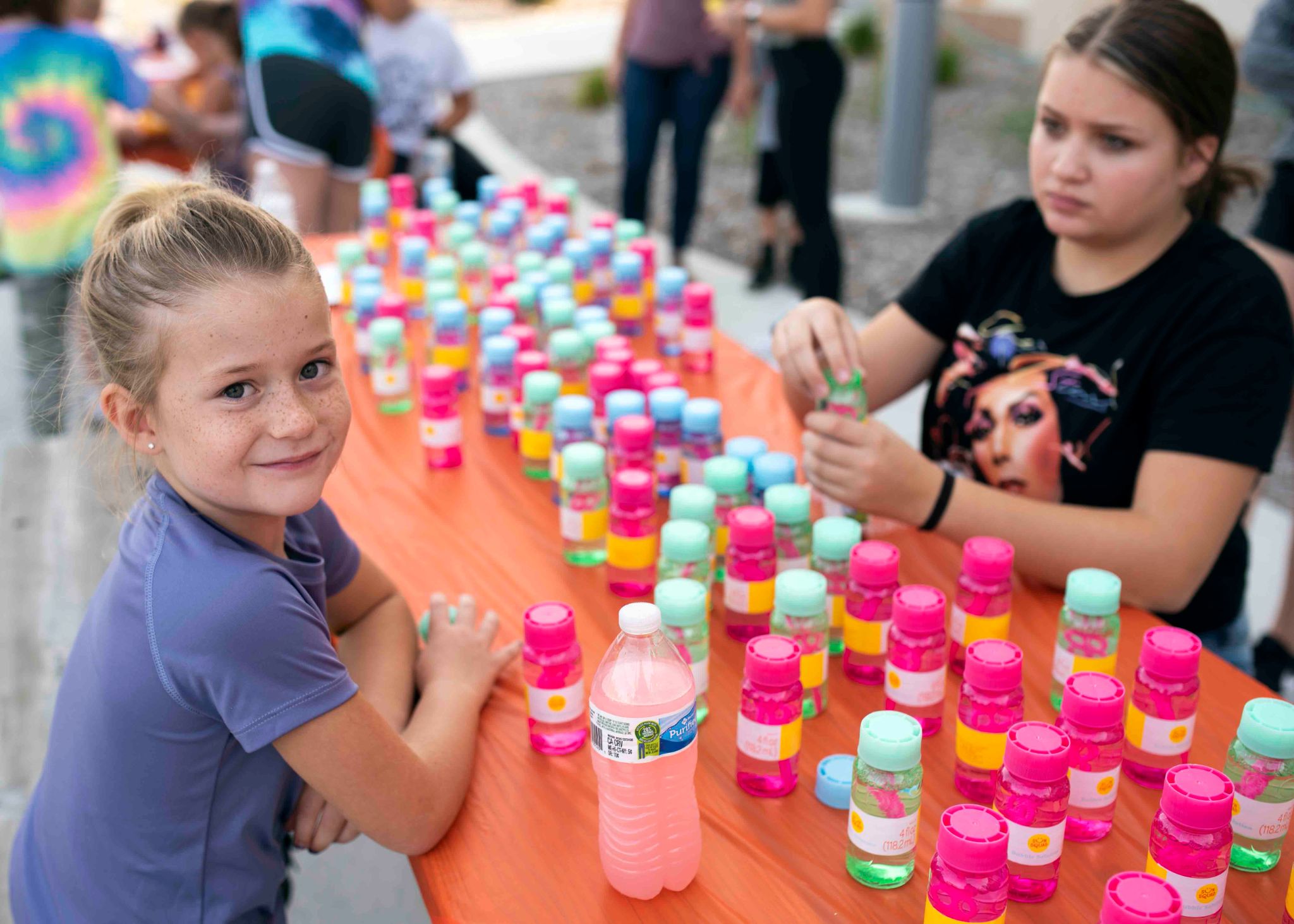 Lexi Wobbrock helped out in the bubble blowing stand during the parking lot picnic. 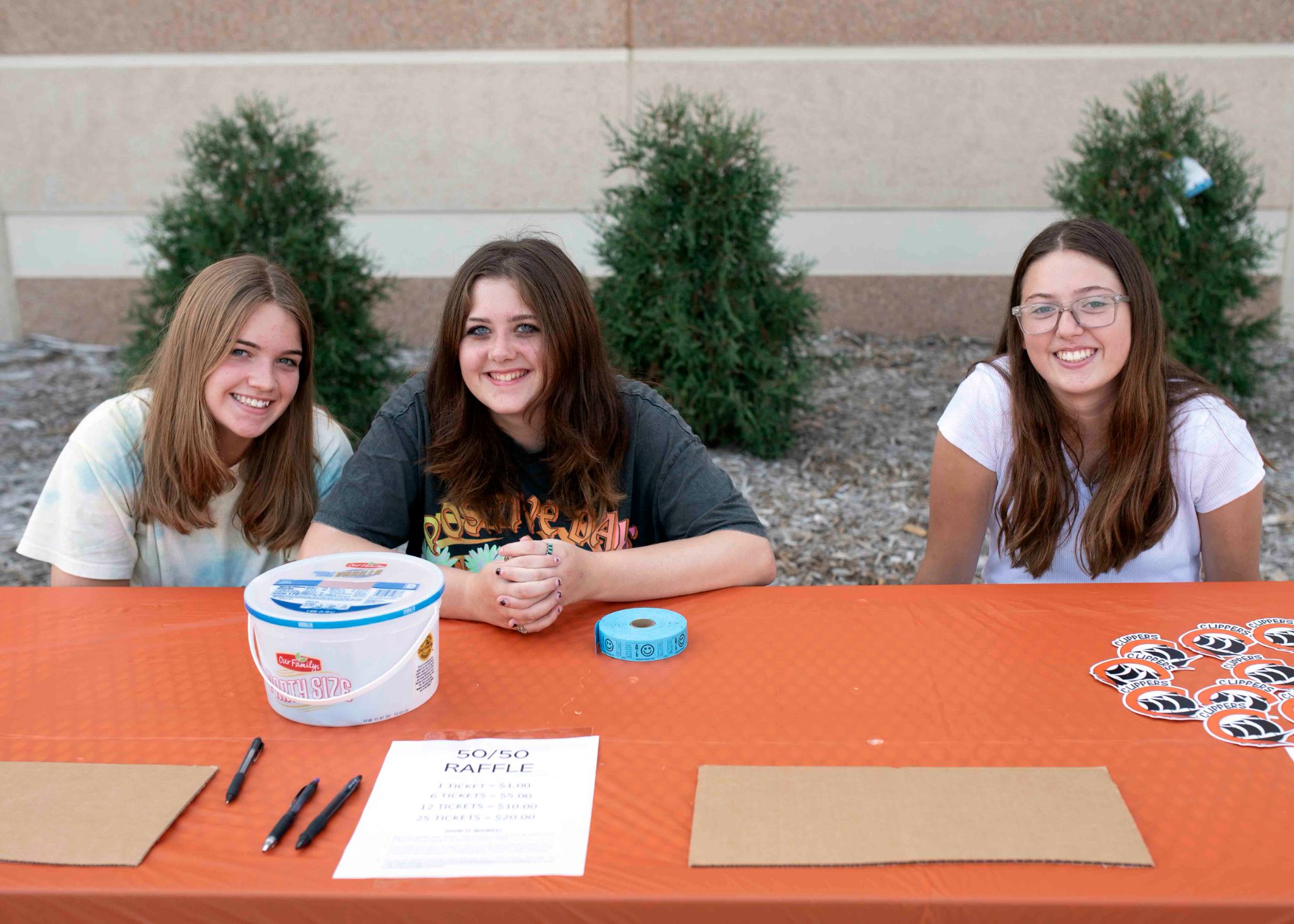 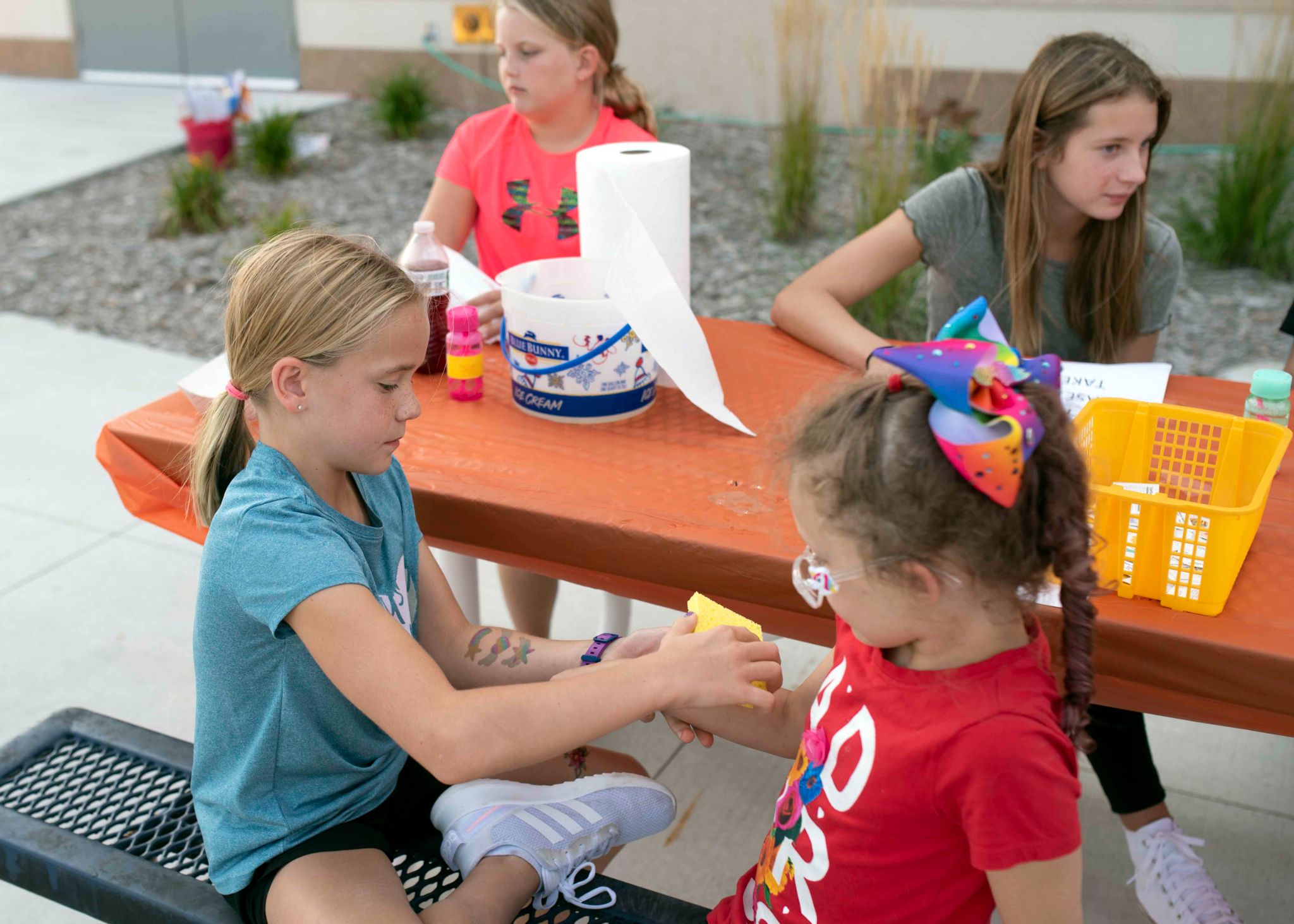