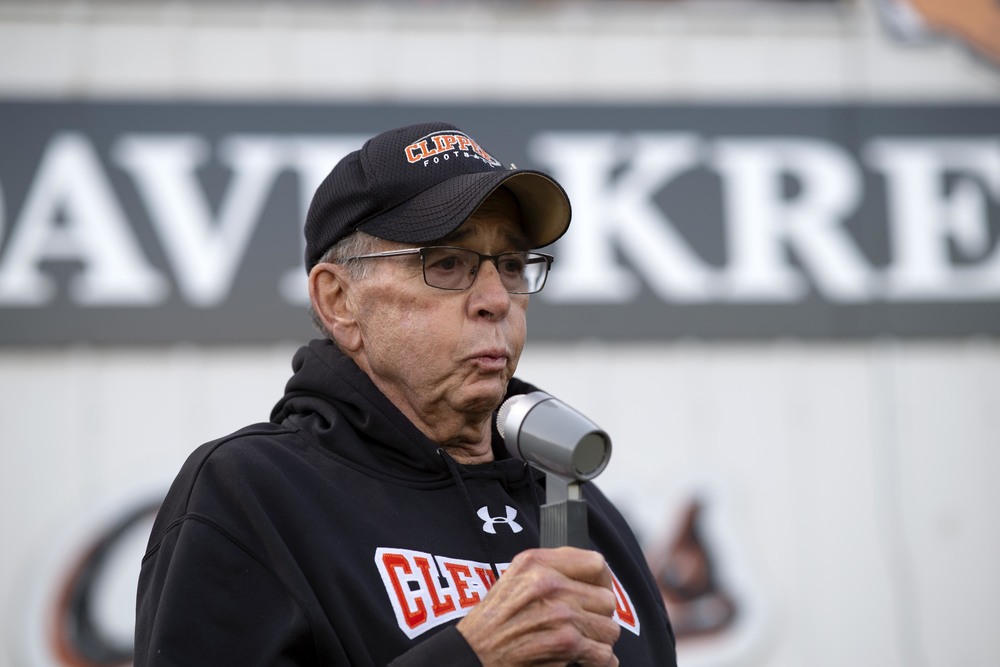 Football fields, by any other name, would still have a pair of goal posts and measure 100 yards from end zone to end zone.

But there are individuals and stories behind them.

For Cleveland’s field, located at the bottom of the hill behind the school since the mid 60s, no one has left a larger mark than Dave Krenik, the program’s longest tenured coach.

So, in ceremonies before Cleveland’s game against Lester Prairie on Friday, and with many of Krenik’s friends, former players and family looking on, the field was officially designated Dave Krenik Field. He received a commemorative plaque and watched as his name—on a 20-foot-long sign across the crow’s nest—was unveiled.

“A week ago, 25 former players and school personnel stopped at my house and told me about this,” Krenik said in a short speech during the ceremony. “I was overwhelmed and honored. A week later, I still am.”

Krenik recognized those who made the high honor happen.

“I know (School Board Chairman) Ron McCabe was a big part of it and (School Board member) Jeff Robb, also a former player of mine, and Rich Kern, the athletic director."

He also acknowledged those who supported him in his term as head coach.

“I would like to thank my wife, Mary. Anybody who has ever coached knows your spouse is in it with you...and also our two daughters, Sarah and Laura. I missed a lot of their tennis matches because of football, but I think they understood. They’re both coaches now. I would like to thank all my former players and their parents. It was a great community to teach and coach in. Many of them remain friends forever. I had eight different assistants in my 29 years here. A lot of them are here tonight. A couple of them are head coaches at big-time schools.”

Krenik closed with what he used to tell elementary students in the PE and health classes he taught at Cleveland School.

“He was the true definition of a players’ coach,” said current Cleveland head coach Erik Hermanson, who assisted Krenik for 17 years. “He loved football at every level and helped foster that passion into his teams.”

One of Krenik’s great strengths was his ability to adapt to the team that he was given, Hermanson said.

﻿“He didn't make the players conform to his idea of a particular offense. Each year, he would evaluate his talent, and that was the style of play that his team would execute. He had great passing teams with quarterbacks like Pat O'Connor, Matt Johnson and Scott Perron. But he also had smash-mouth teams that featured running backs like Derek Fults, Ryan Losinski and Marty Schmitz. He also helped Cleveland effortlessly flow back and forth between 9- and 11-man football, sometimes in the same season and week to week.”

Krenik, a Le Center native, continues to attend many Cleveland football games, even though he was diagnosed with acute myeloid leukemia in 2017. 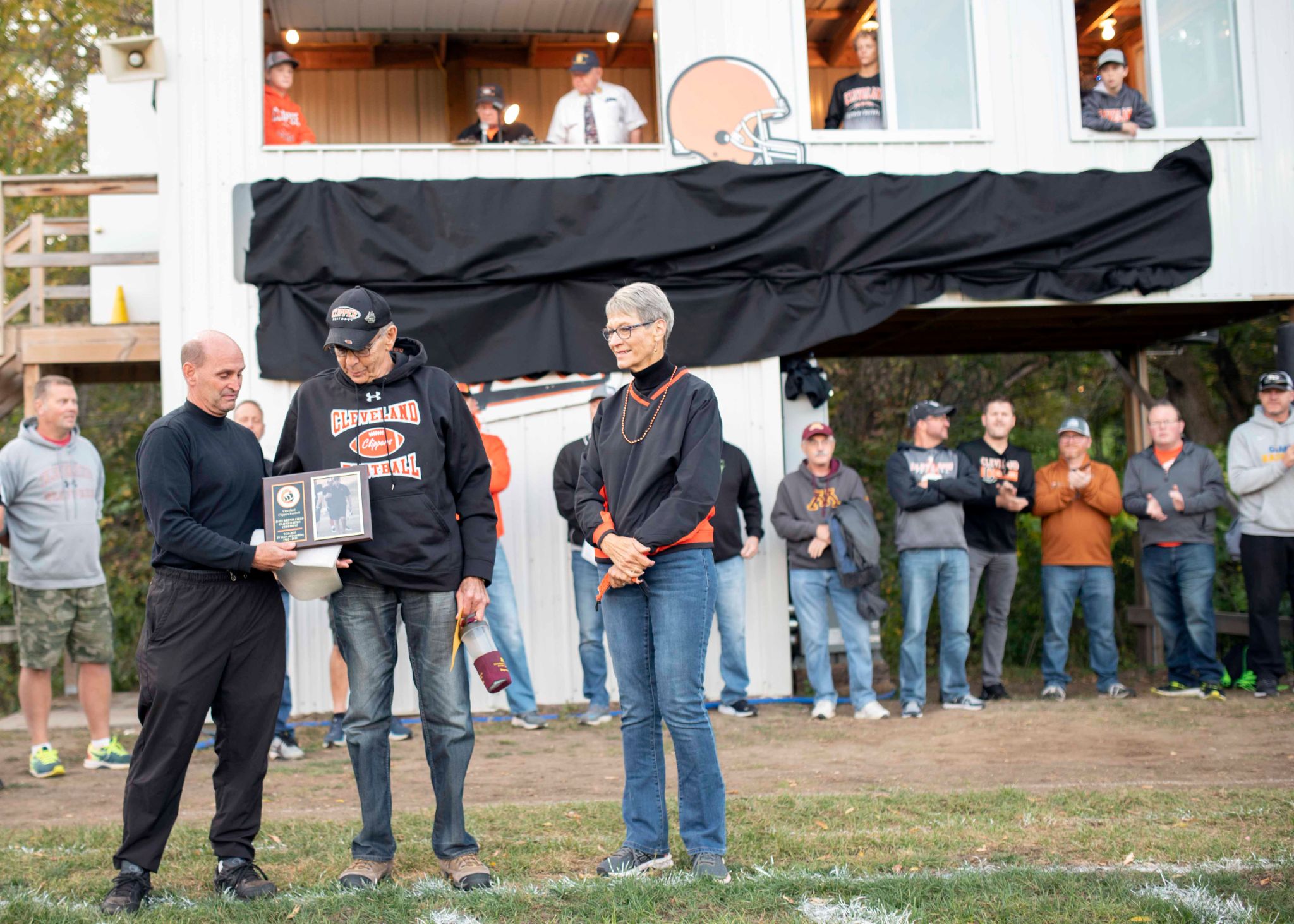 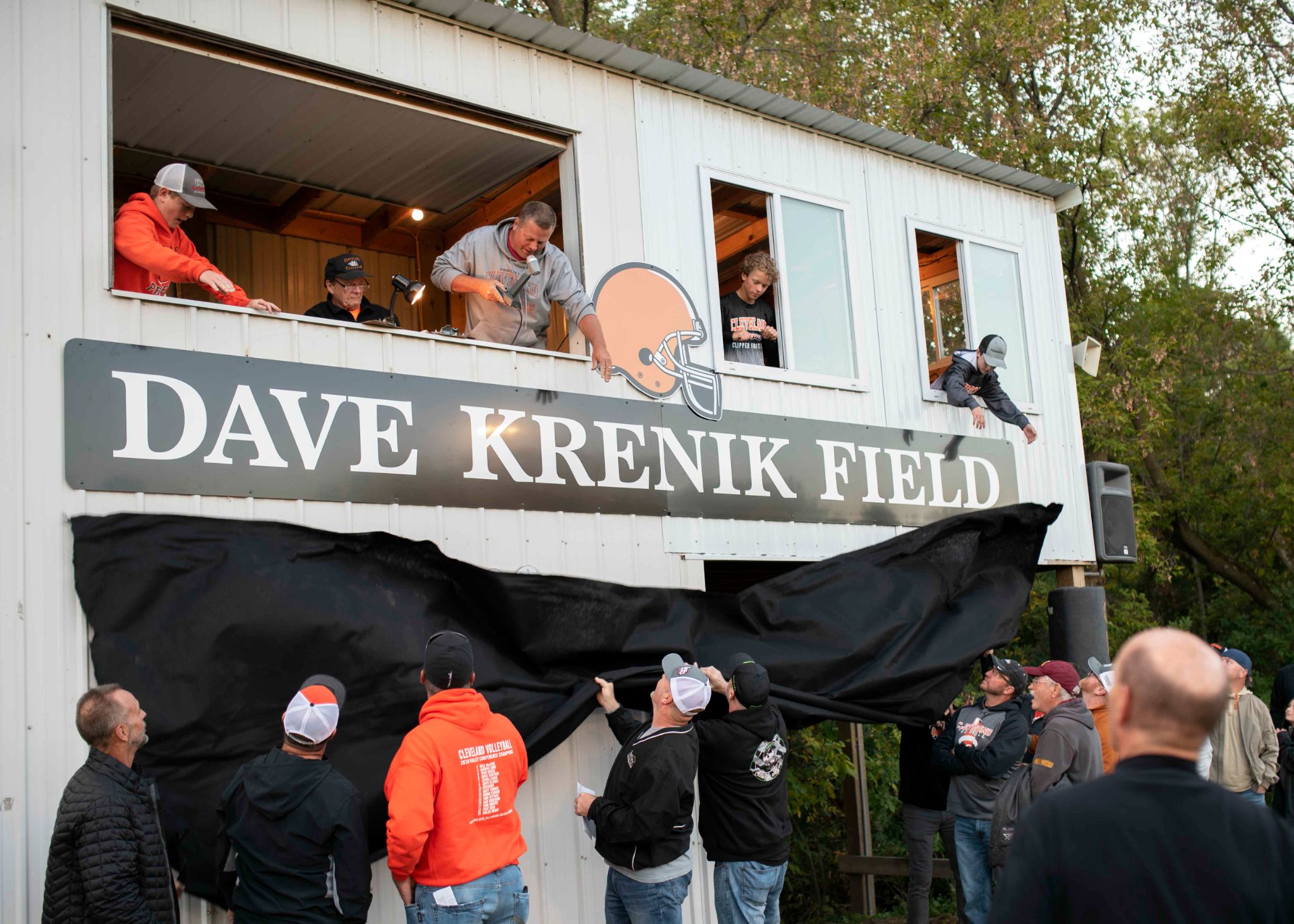 Former players helped unveil the sign on the crow’s nest. Guiding the action from above is AD Rich Kern. Next to him, CHS football announcer Steve Biehn emceed the ceremony. 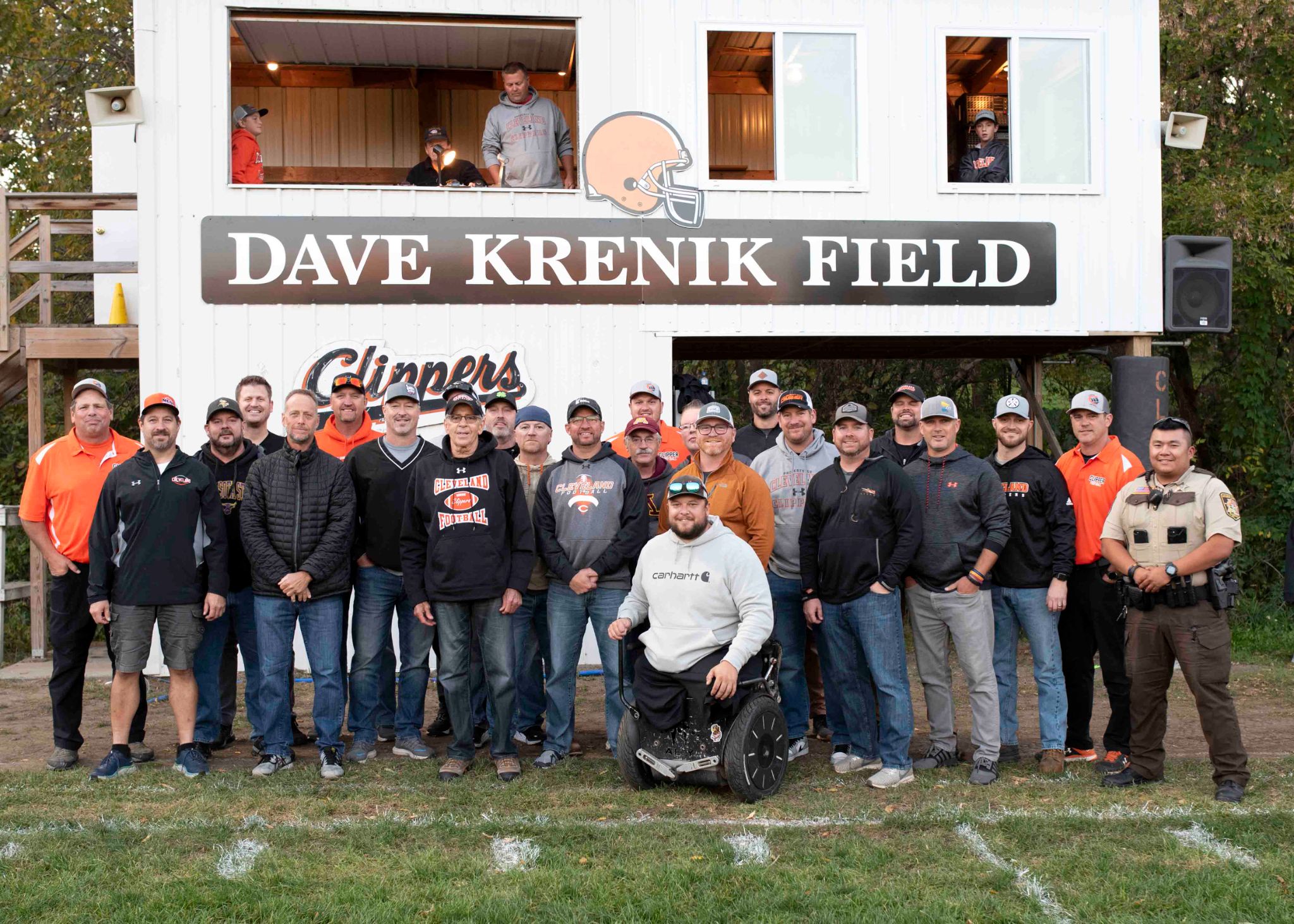 Many of Krenik’s former players were in attendance. 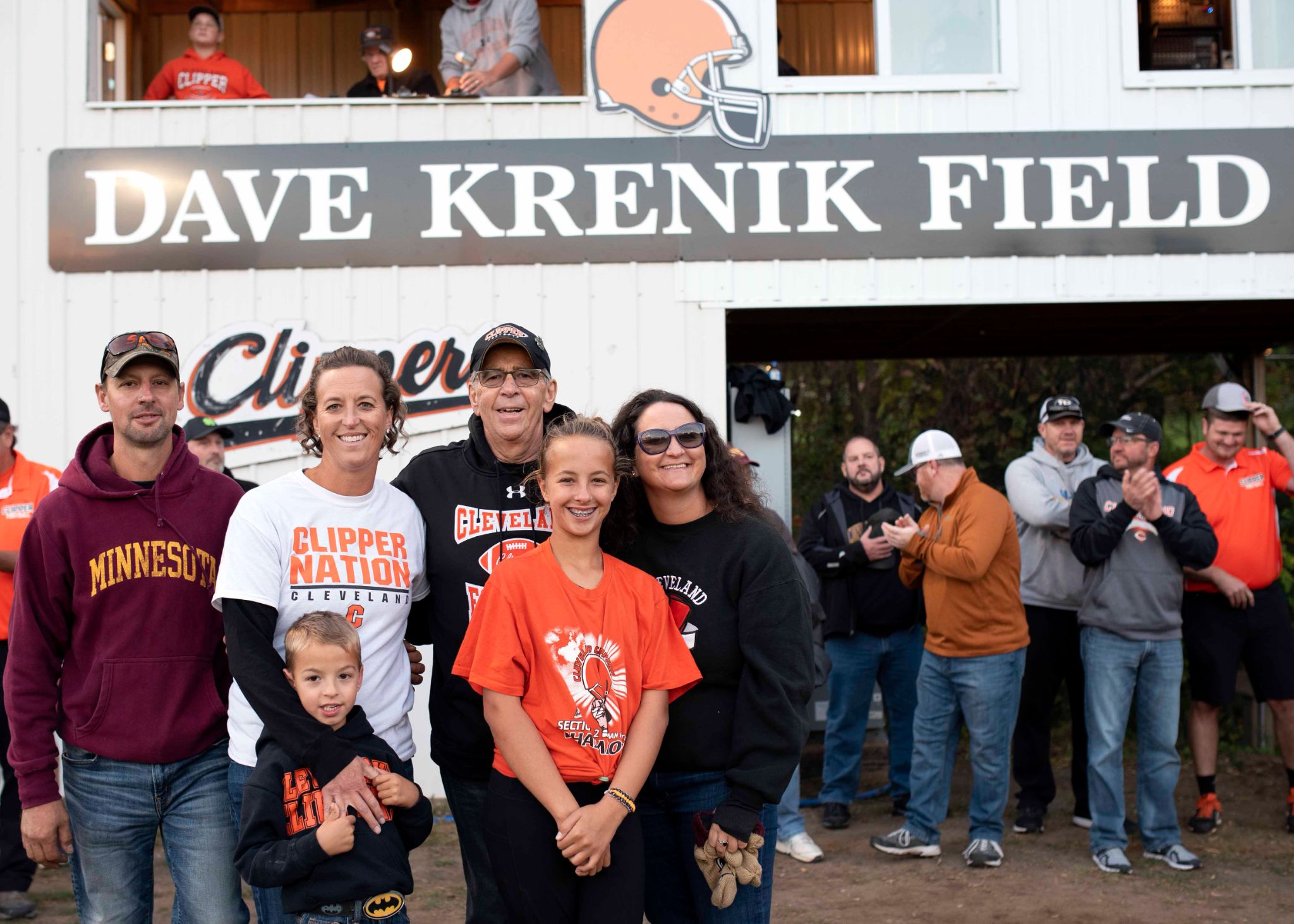 Krenik and his daughters, Sarah (left) and Laura (right), his son in law and their children. 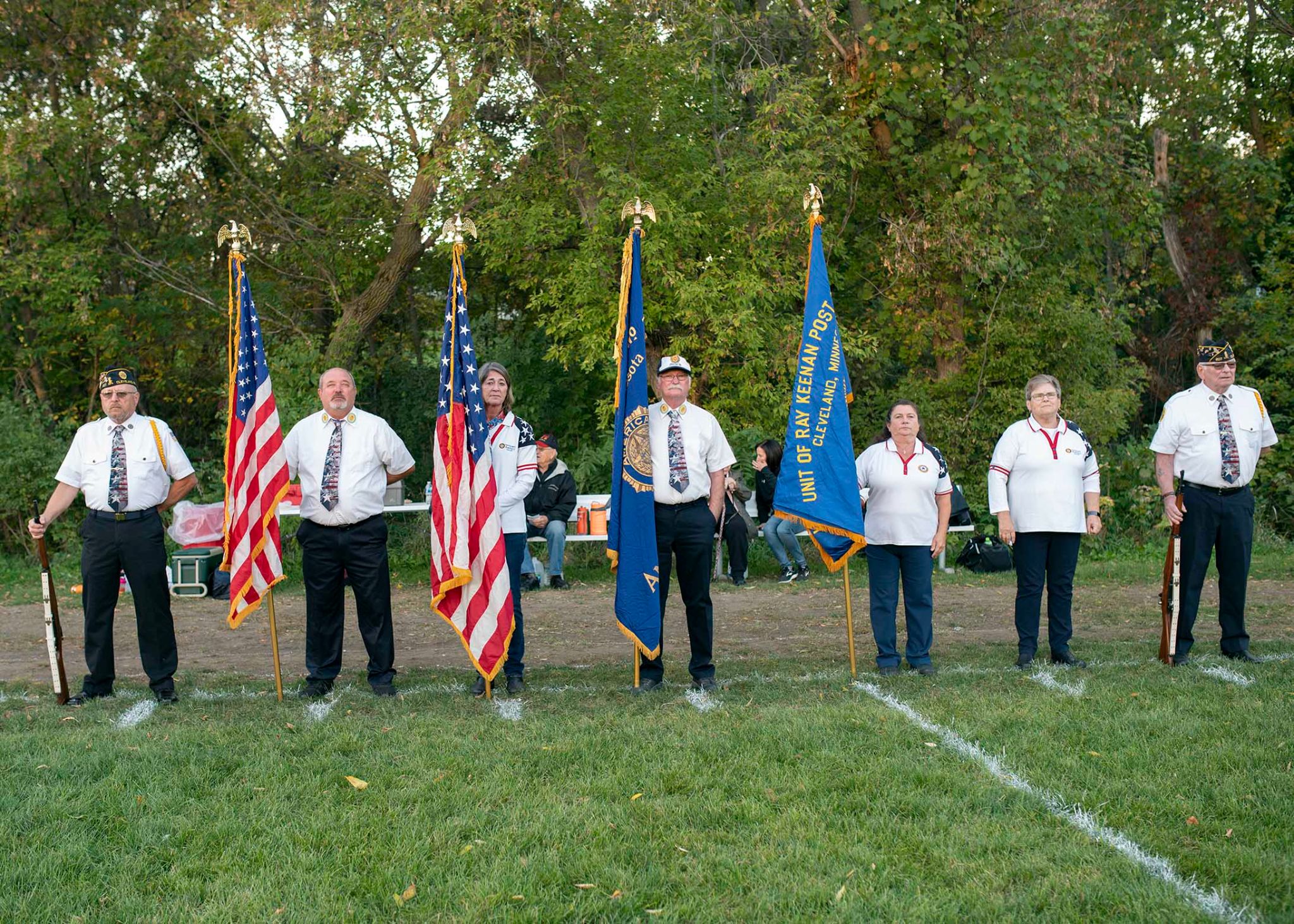