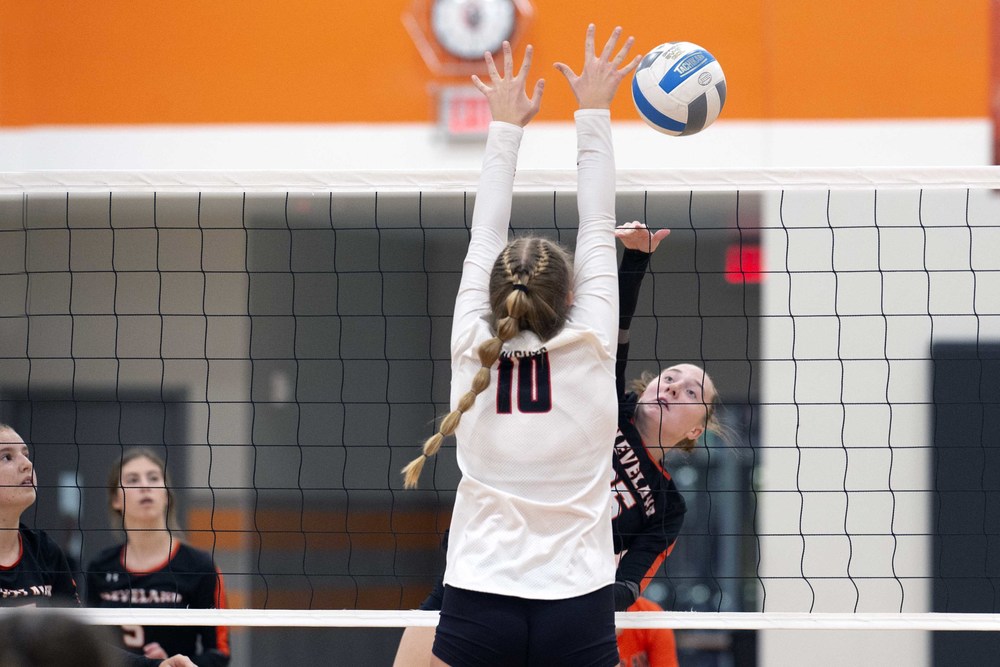 Above: Lexi Waldron on the attack against Alden-Conger.

Winning the second and third game on Thursday, visiting Alden-Conger handed the Clipper B squad girls their first loss of the season.

The Clippers never threw in the towel but were a different team with Greta Hahn moved up to varsity, said coach Sally Kortuem.

“The other girls stepped up and did a good job, but it didn’t pan out.”

The Clippers led through most of game one. Down the stretch, Mariah McCabe slammed down a hit, and Maya Lassiter dropped in a kill and then posted up an ace block for Clipper point 21. The Clippers won 25-19 after the Knights socked the ball into the net.

Cleveland got off to a 6-0 start in game two and then sent a serve outside the boundary line. After three-straight Clipper errors, the game knotted at eight.

Trailing 13-12, the Knights went on a roll though, capitalizing on what were mostly Clipper miscues to take a 22-13 lead. They won 25-15 on an attack.

Game three started on a Sophie Perkins ace tip, but the Knights grabbed the next three points to take a lead they would never give up. Later, Lacey McCabe and Mariah McCabe poked in winners, and the Clippers narrowed their deficit by three, 11-8.

The Knights responded with a kill, but Perkins found some vacant floor with a push, and Mariah McCabe scored on an ace tip to pull Cleveland within two 12-10, but the Clippers served into the net, and the Knights followed up with an ace serve. The game ended 15-10 on a Clipper hit into the webbing.

In the Tri-City United tournament on Saturday, the Clippers Bs fell to Lester Prairie in a close 2-1 match but came back to beat Zumbrota Mazeppa 2-0.

Connor had 10 digs, a pair of kills and was five for five in serving with one ace. Maddy Seely had four set assists, one dig and two ace blocks. Lassiter completed three of her four serve attempts and had one kill and two blocks. Lilly Lamont had six set assists, two digs and was five for five in serving. Brenna McCarthy had four kills and two digs. She was three for four from the service line with one ace. Jocelyn Bartell was six for six in serving with one ace. She also had three digs and two kills.

The Clipper B and C girls travel to Madelia on Thursday. 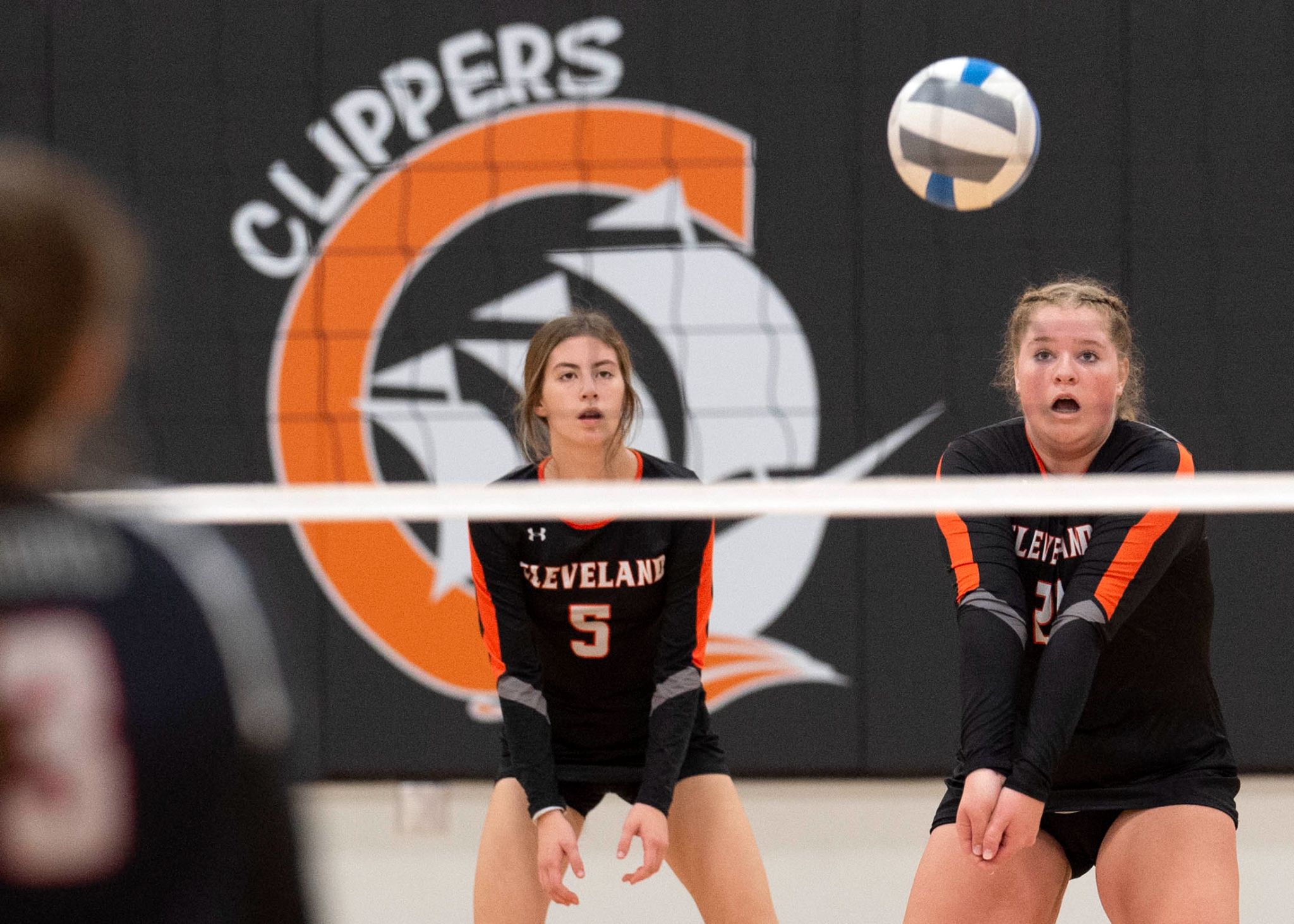 Cassandra Connor receives an Alden-Conger serve. Ready behind her is Lacey McCabe. 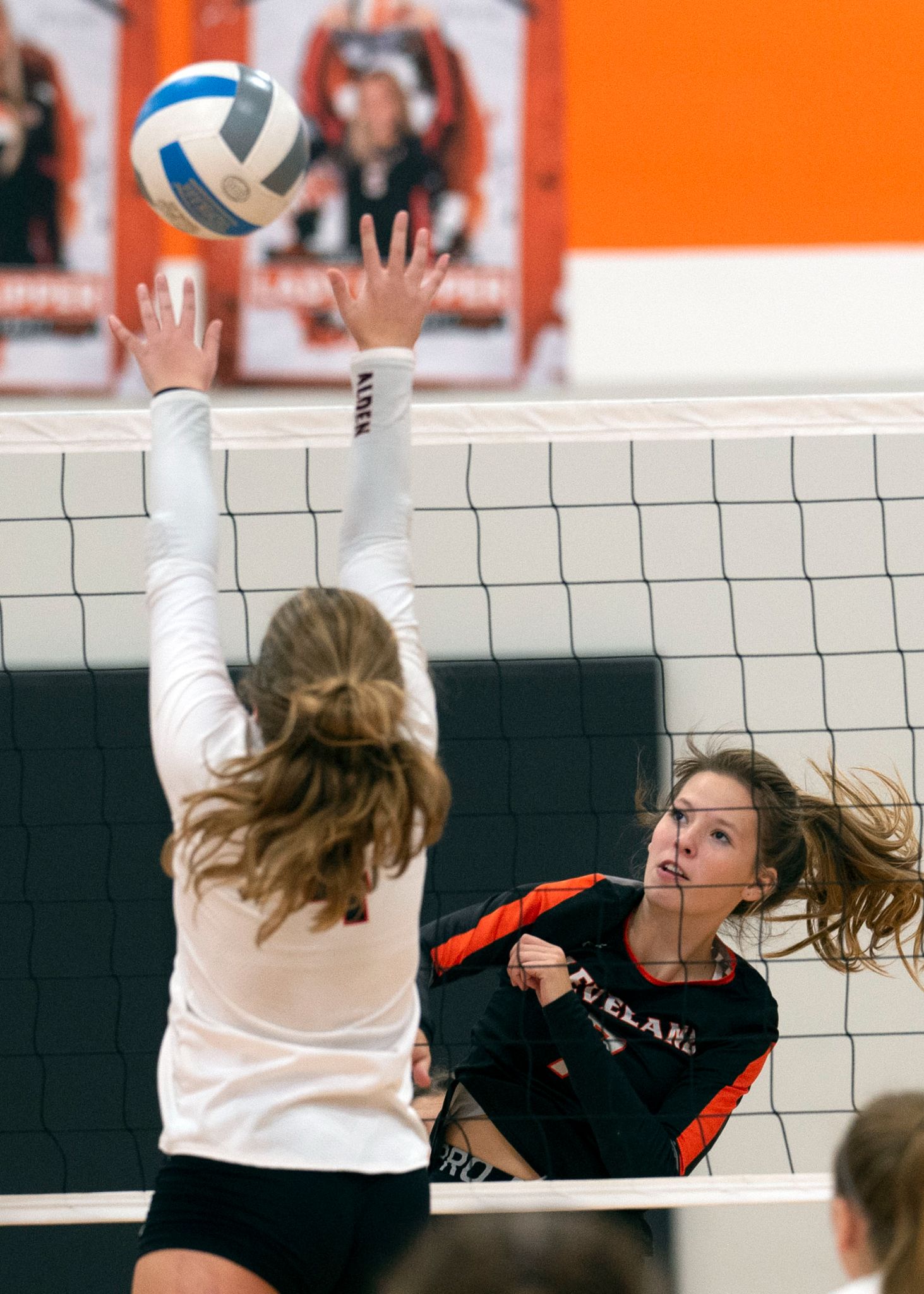 Jersie Kelley goes on the attack against the Knights. 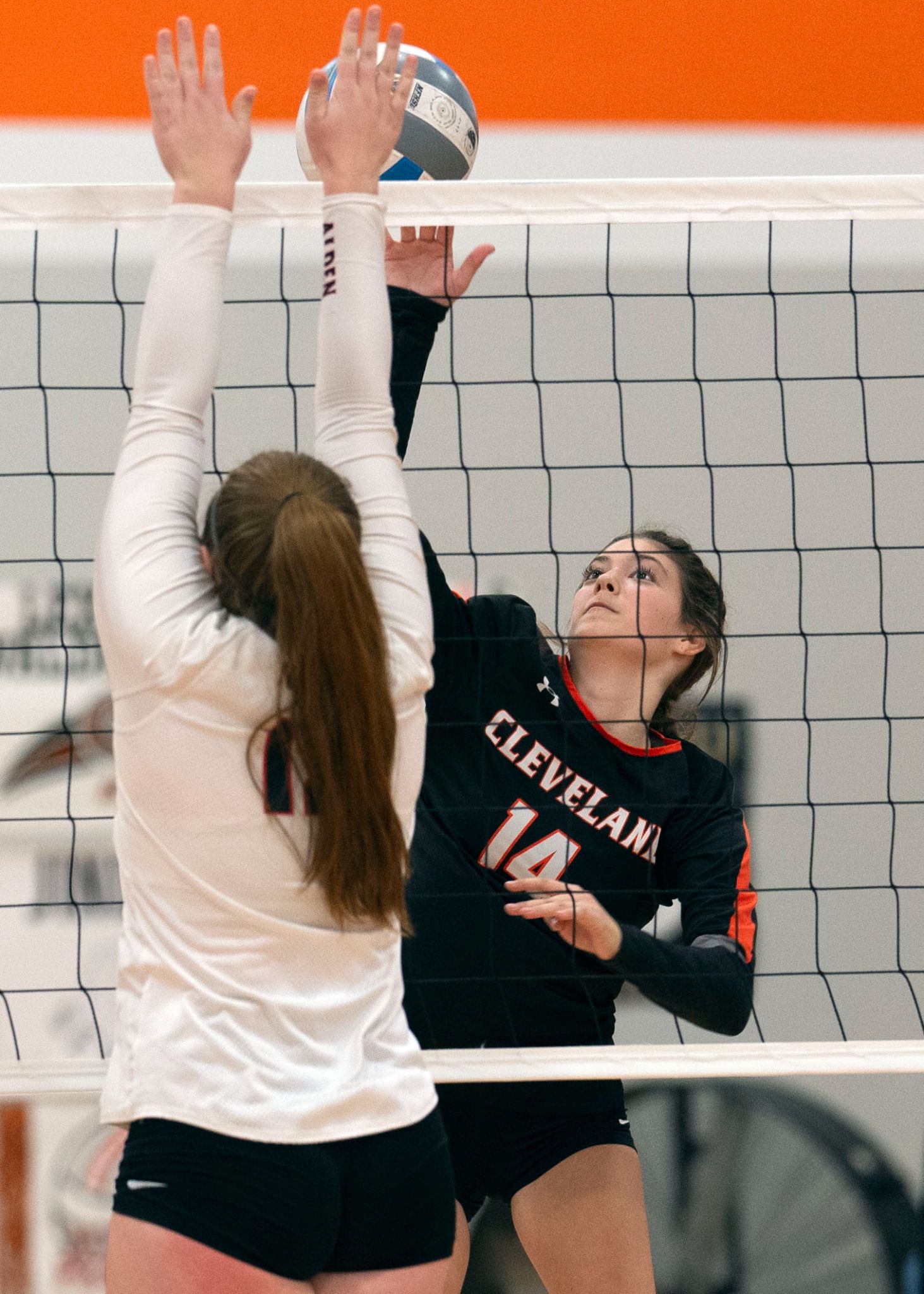 Mariah McCabe battles an Alden-Conger blocker at the net. 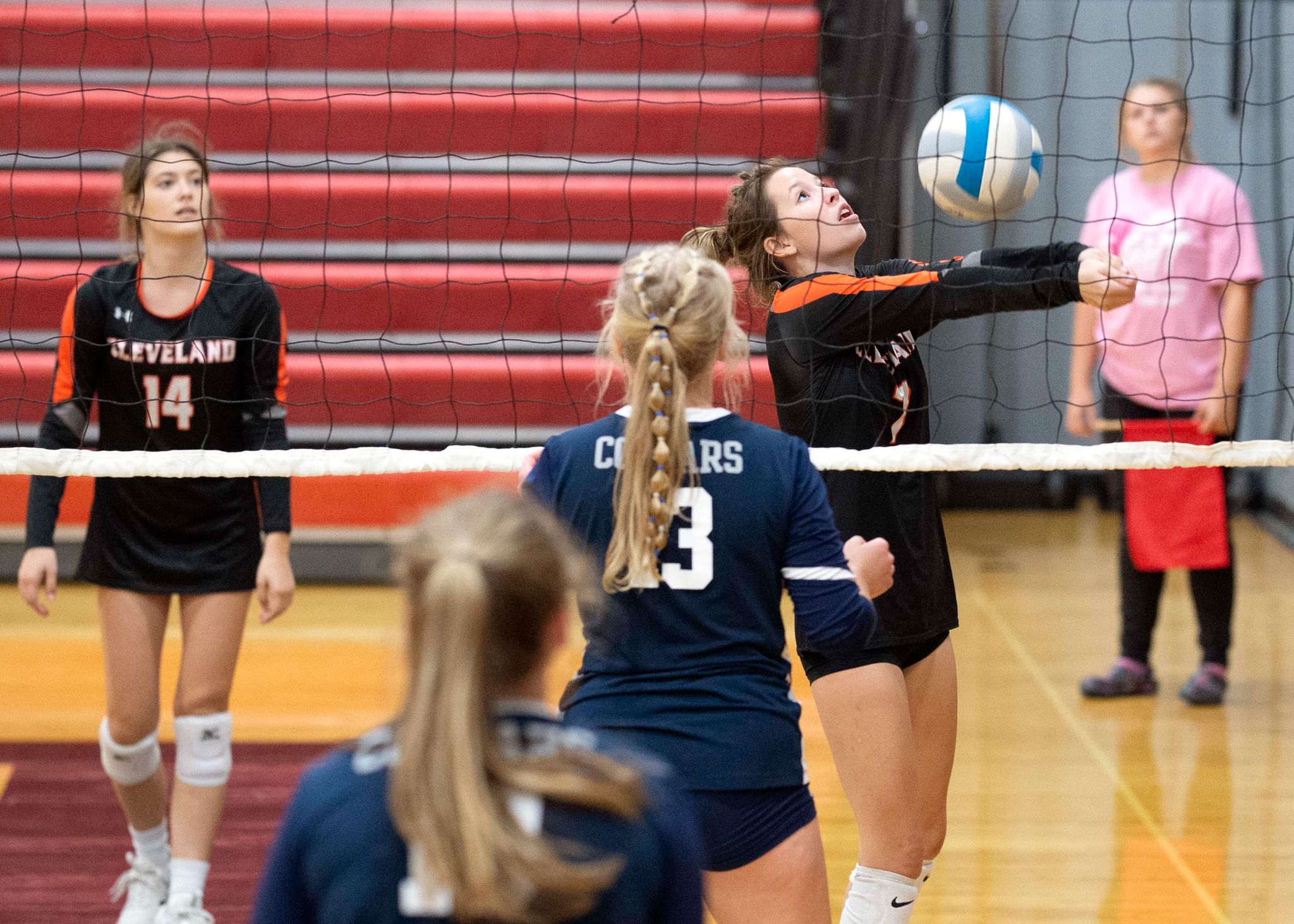 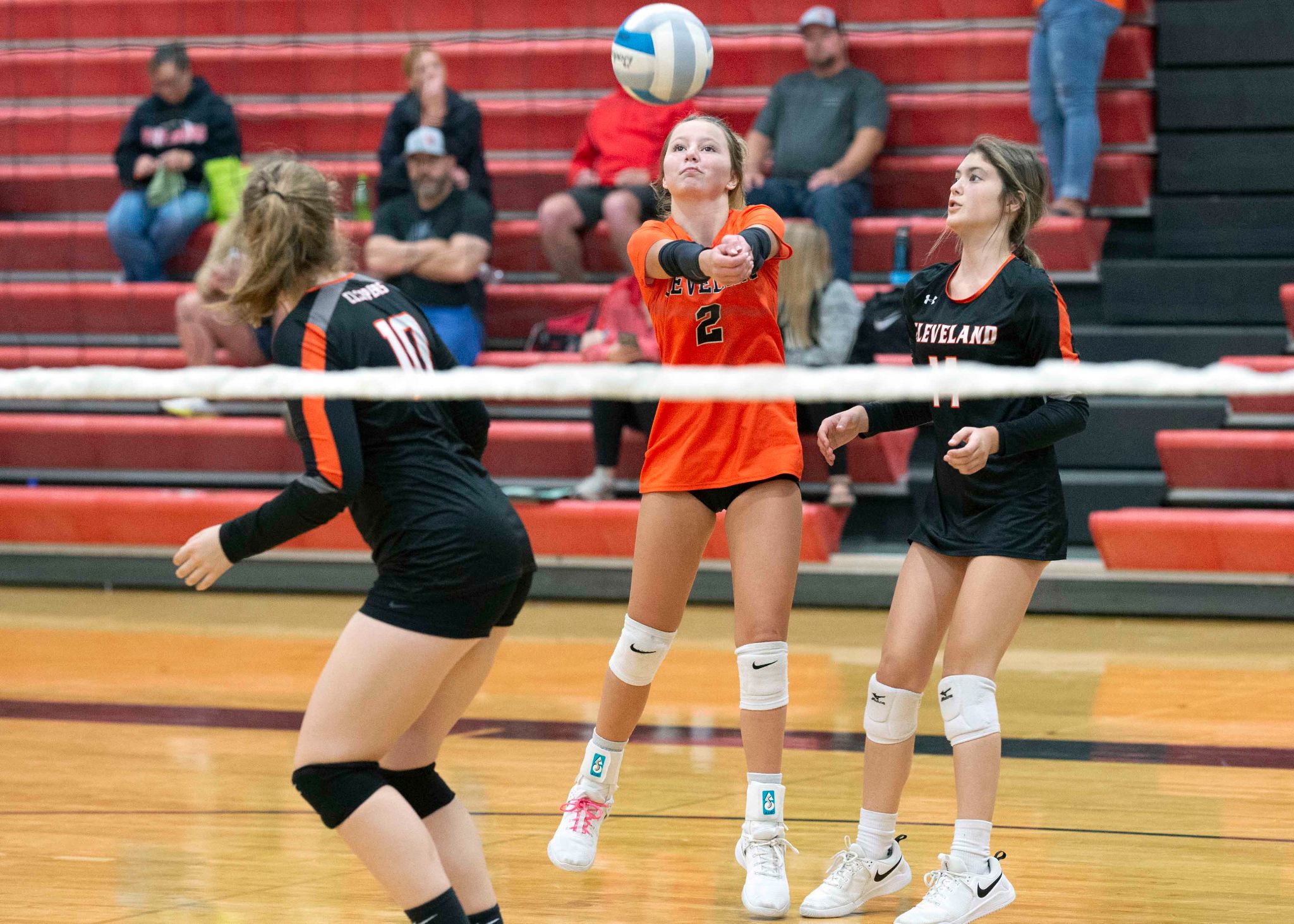 Libero Chole Anderson on the serve receive at TCU. 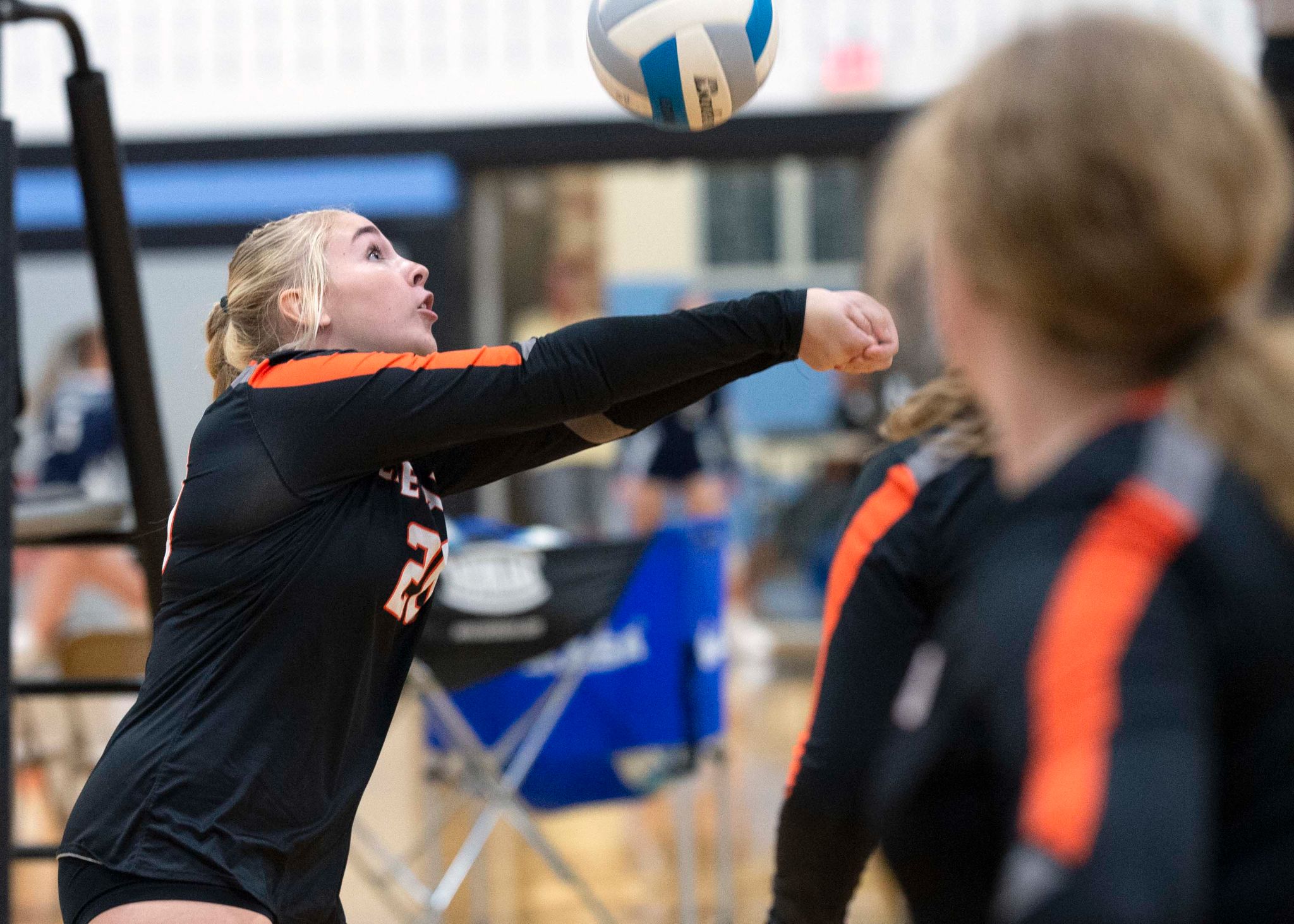 Lilly Lamont props up a bump set at TCU. 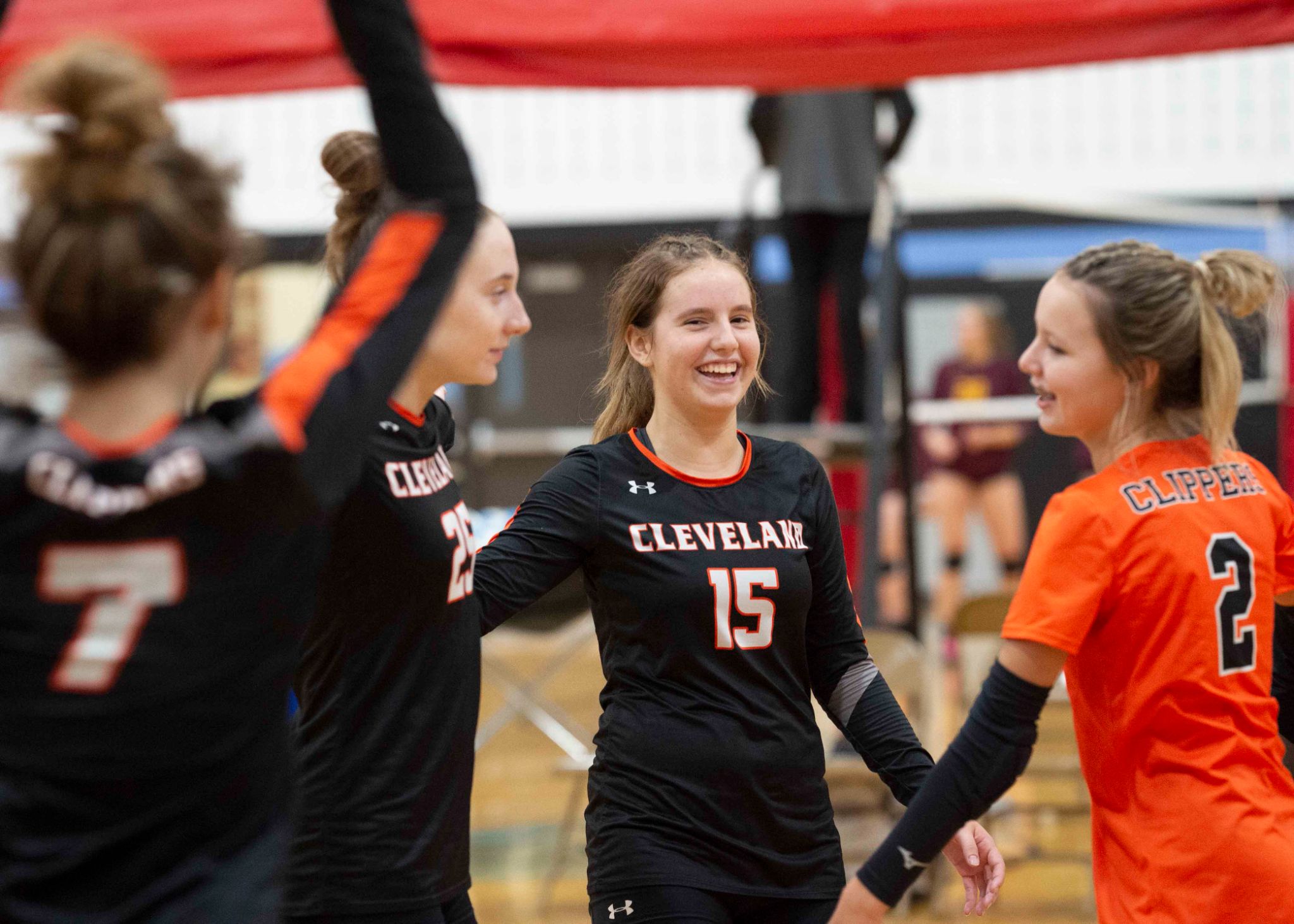 Playing well on Saturday afternoon, the Clippers had a lot to celebrate. In the center is Sophie Perkins.