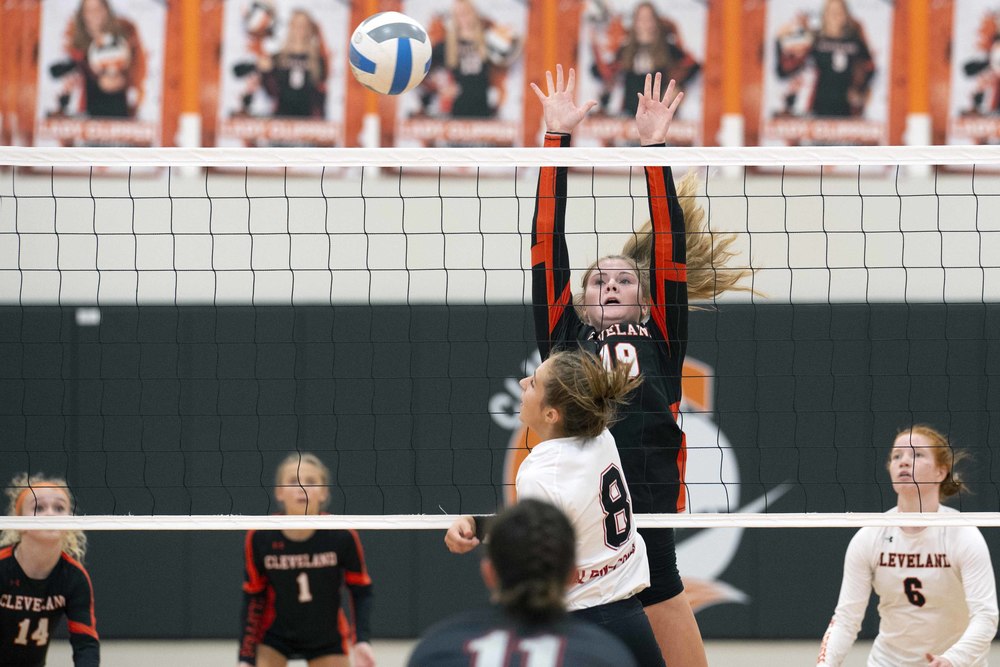 Above: Emily Kern goes up for a block against visiting Alden-Conger. Later, she exited the match with a deep muscle pull in her thigh.

After an easy win in game one against visiting Alden-Conger on Thursday, Emily Kern’s injury in the second game couldn’t have happened at a much worse time for the Clippers.

In what was the de facto conference championship between the two Valley unbeatens, the Clipper power hitter left the gym in a wheelchair, and the Clippers, seemingly rattled by the thought of losing their ace, surrendered the next seven points en route to a 25-17 defeat.

Back in the gym but on the sidelines, Kern wanted to return but couldn’t put much pressure on her leg, and the Clippers fell in the next two games as well for a 3-1 loss on Senior Night. It was their first defeat in the new gym.

“It is what it is,” said head coach Bree Meyer. “We really missed Emily”

Starting with an Ava Hahn ace block, the Clippers scored 10 out of the first 11 points of game one. Grayce Kortuem’s kill was the Clippers’ point 24, and the game ended 25-9 when the Knights sent a hit out of bounds.

Picking up from where she left off, Kortuem went on the attack for the first point of game two. Kern followed with an ace block, but the Knights scored the next two points.

From there, the lead pendulumed. With a Kern ace tip and a pair of Alden-Conger errors, the Clippers were up 14-12 before Kern’s untimely injury.

Regrouping, the Clippers got off to a 4-0 start in game three, but after a Hahn service ace put them in front 10-7, the next 11 points went on the Knights side of the scoreboard with the run finally ending when Gosch pushed the ball into a vacant spot on the Knight side of the court.

That was the start of a four-point Clipper spurt. Maddy Steen served up an ace to the Clippers within four, 18-14, but that was as close as they could get. The Knights kept on the attack and won 25-20 after an ace tip.

Keeping the pressure on, the Knights eased out front in game four at the 13-13 mark. With attack winners by Steen, Hahn and Kortuem, the Clippers pulled within one, 20-19, but the Knights responded with a kill and an ace block for the next two points.

The Clippers were back within a point, 22-21 after Kortuem angled down a winner and the Knights sent a hit out of bounds, but the Clippers got tagged for four touches, knocked a hit over the back line and then had trouble near the net for the 25-21 loss.

Kortuem had a dozen kills and four blocks. Ava Hahn had 10 kills. Gosch had 27 set assists and five blocks. Emma Sweere had 25 digs and completed all 18 of her serve attempts. Ava and Greta Hahn each had 14 digs. Ava Hahn was 18 of 18 from the service line with three aces.

Kern was back on the in the lineup for a matinée game in Mapleton on Friday, where Cleveland defeated Maple River 25-18, 25-16 and 25-17.  Limited to the front row, she had 10 kills, and four blocks. Gosch had 24 set assists, three kills and six digs. Sweere had 13 digs, Kortuem added six kills, and four blocks, and Savannah Meyer was 10 for 10 serving with one ace and four digs.

On Saturday, Cleveland tied for third at the TCU tournament in Montgomery. The Clippers started out the day by defeating Janesville-Waldorf-Pemberton 25-18, 25-18. From there, they won the first set against Fairmont 25-21.

In a hard fought set during the last match of pool play, the Clippers lost the first game against Glencoe-Silver Lake 31-33.

Back and forth with each team a point within winning, the game tied at 31 when Klingel dropped down a kill. But GSL responded with a couple of pushes over the net and down to some Clipper open floor for the 33-31 win.

Deflated after the narrow defeat, Cleveland fell in the second game against GSL 22-25 and then lost to Zumbrota-Mazeppa 25-27, 19-25 in the first round of bracket play.

Cleveland 17-8, (5-1) travels to Madelia for a Valley Conference match-up on Thursday. 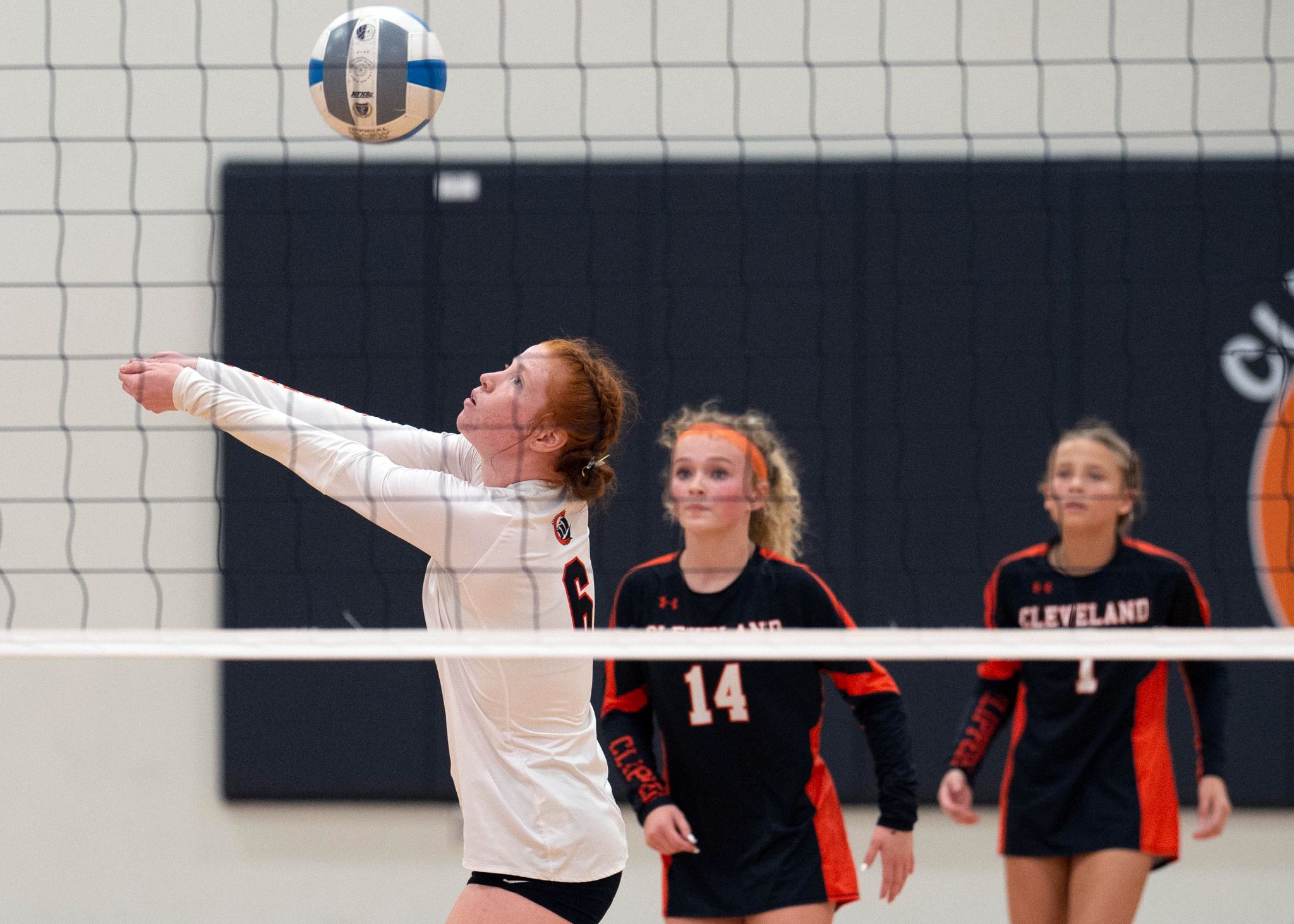 Emma Sweere at the net. Next to her is Greta Hahn. 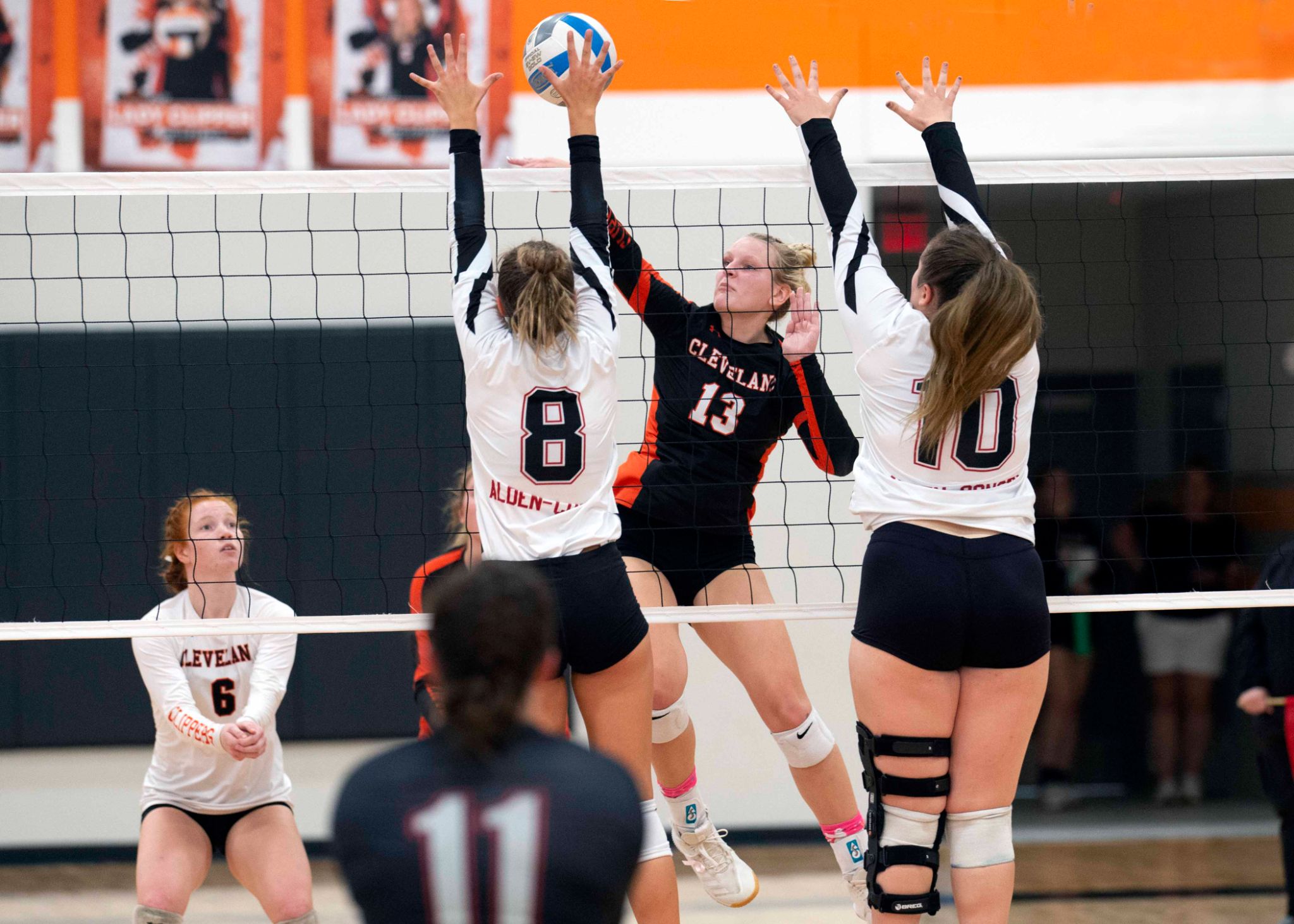 Grayce Kortuem leaps for an attack. 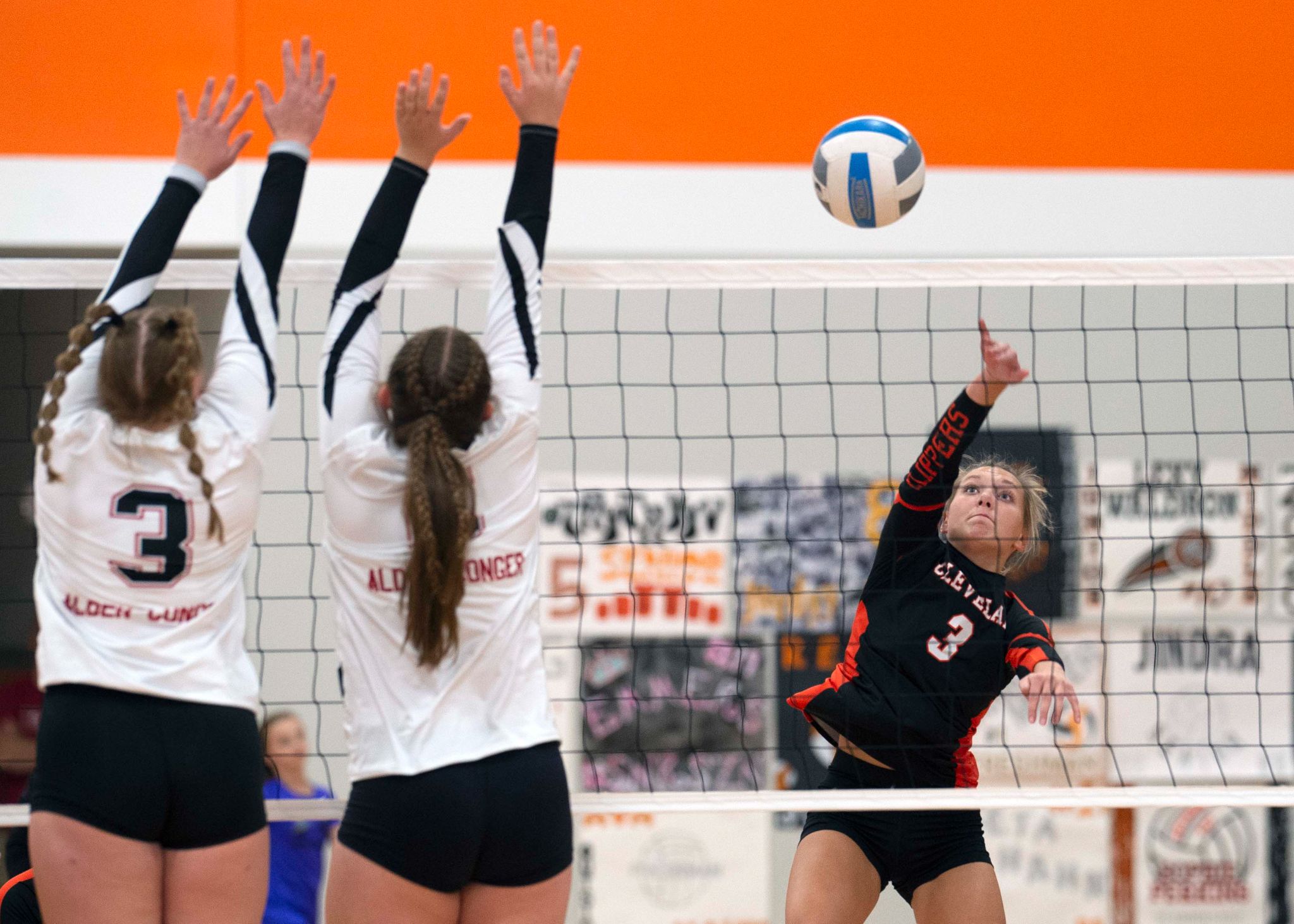 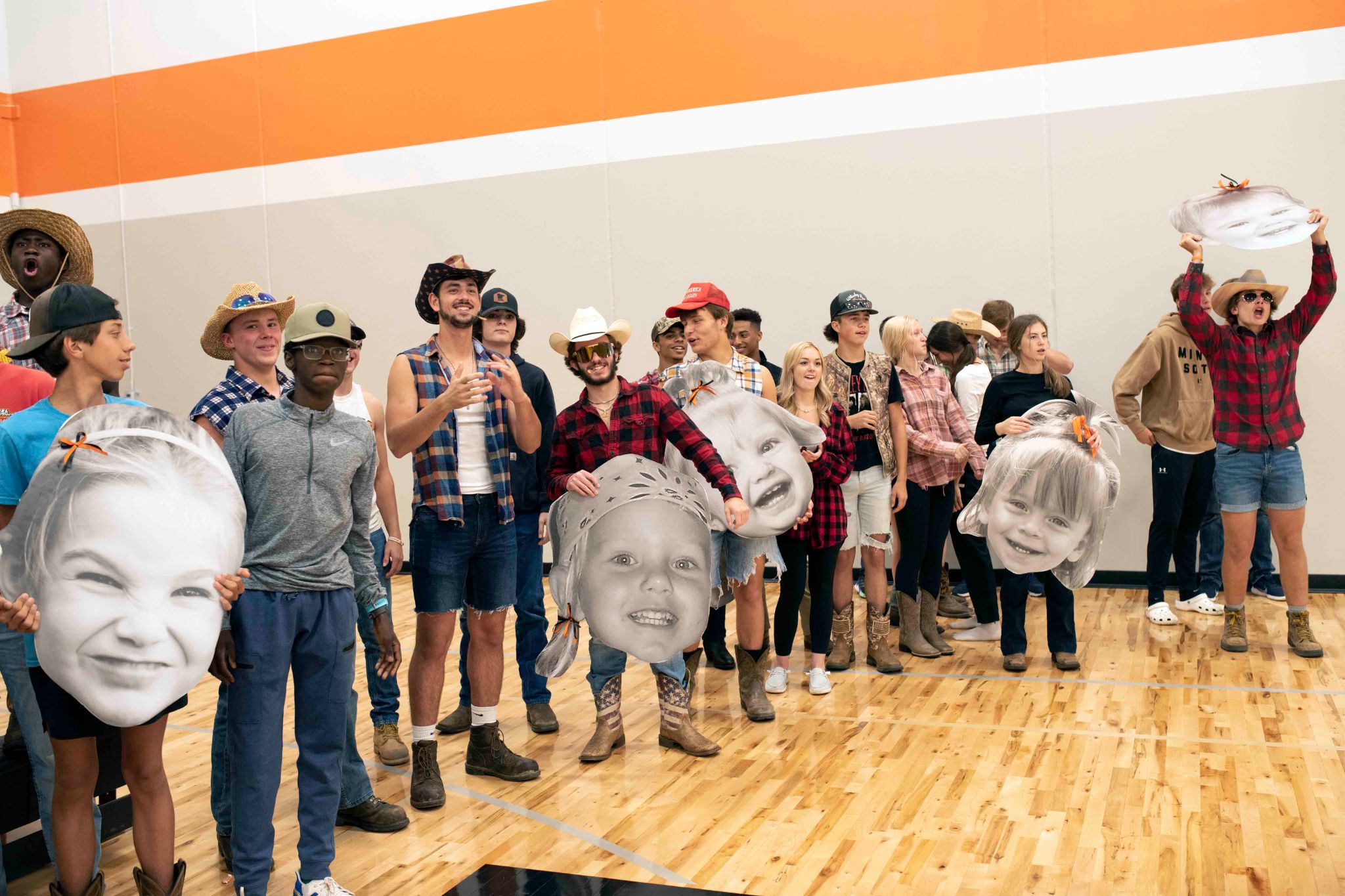 It was a rural theme for the student section. 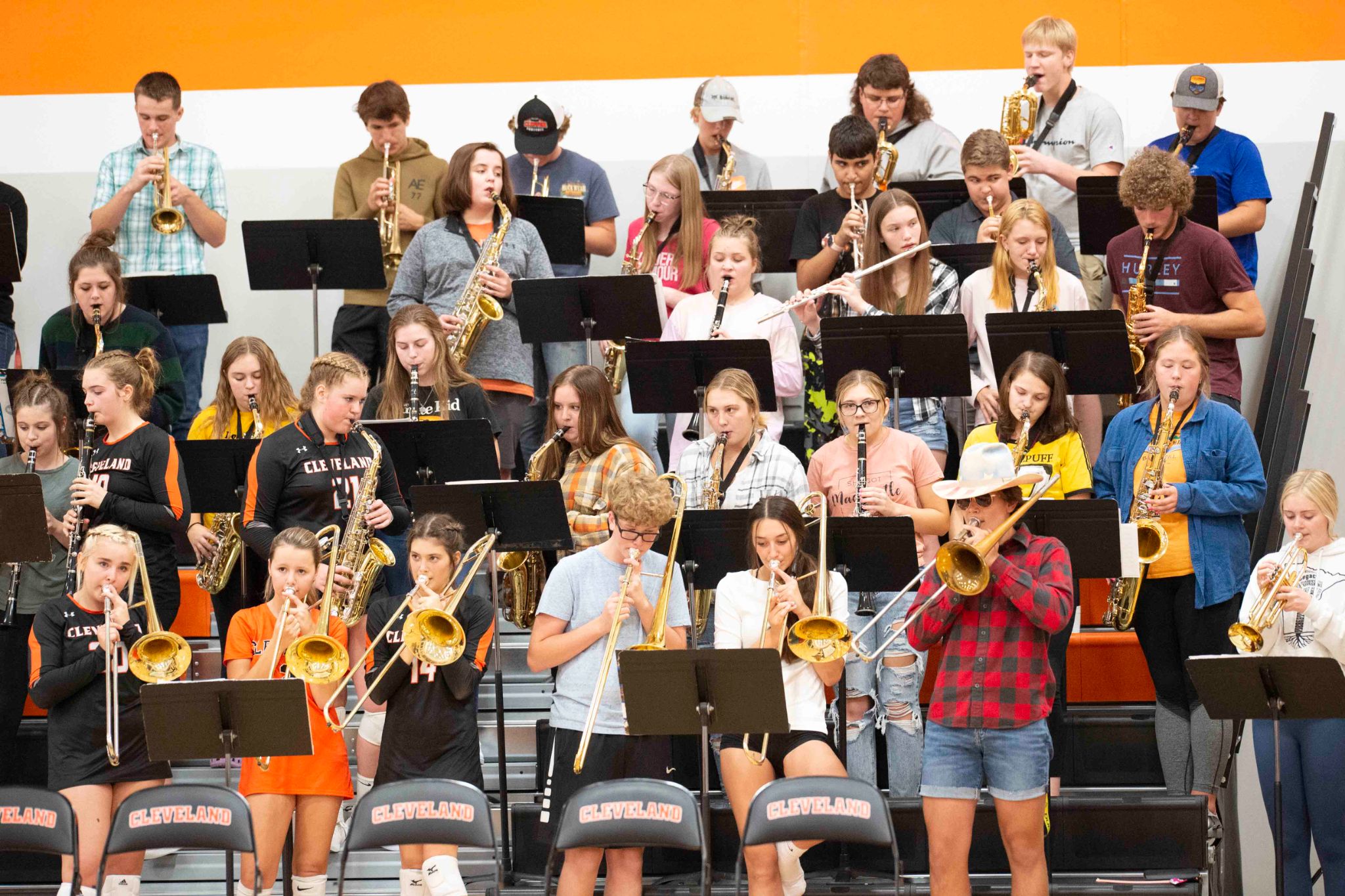 The Pep Band was out in full force on Thursday. 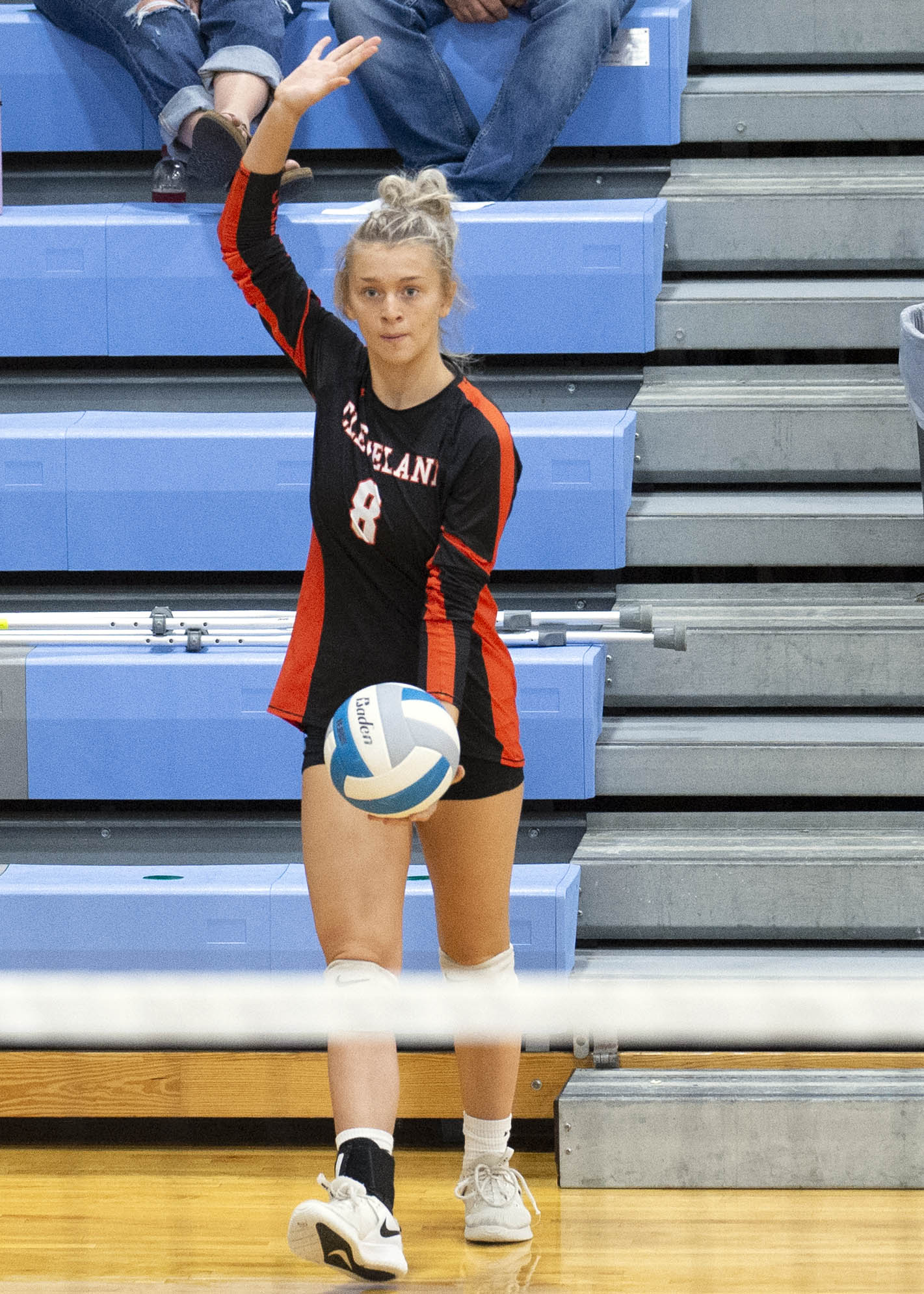 Jordyn Klingel winds up for a serve against Fairmont during the TCU tourney. 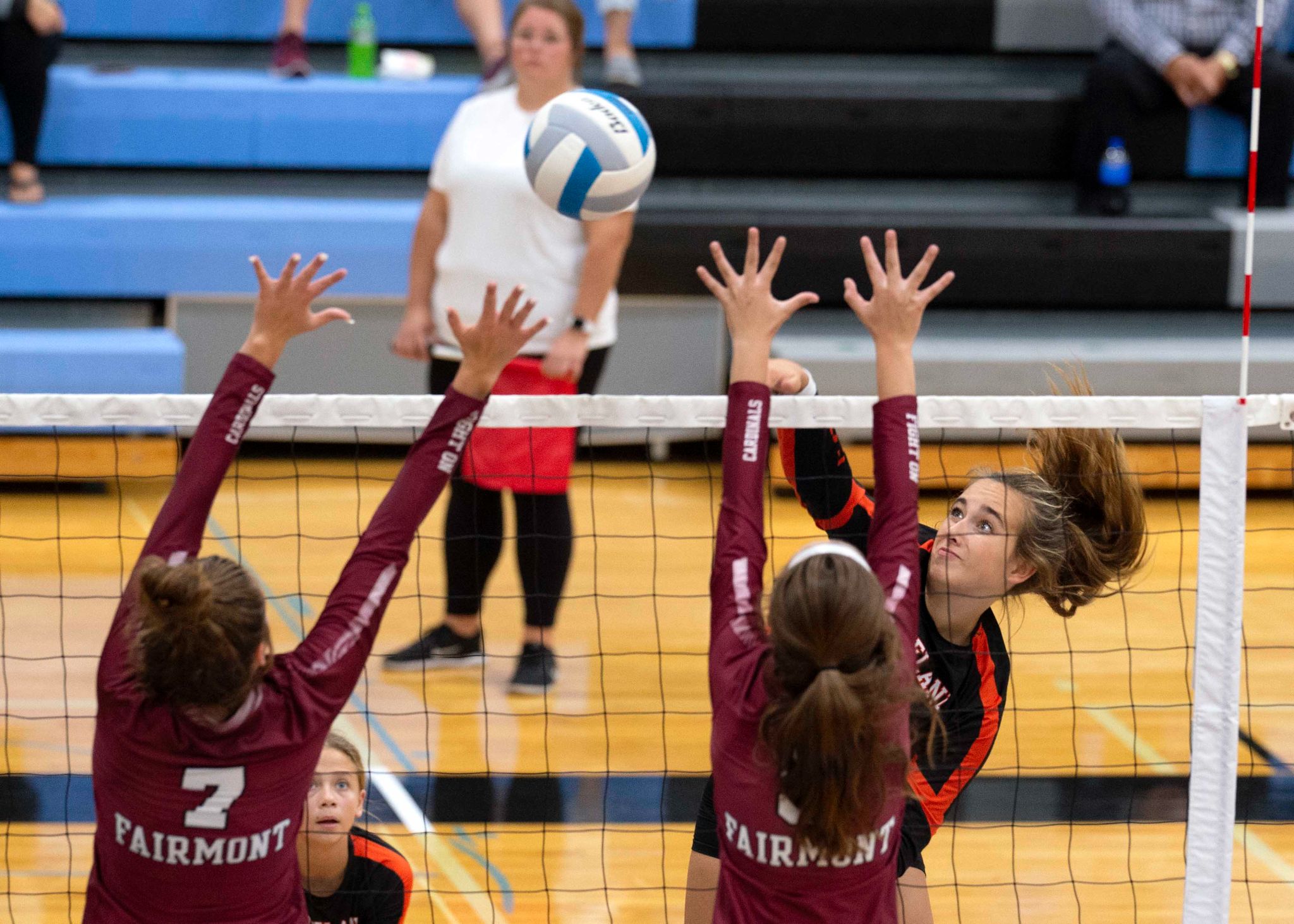 Laci Hollerich plops over a hit against Fairmont. 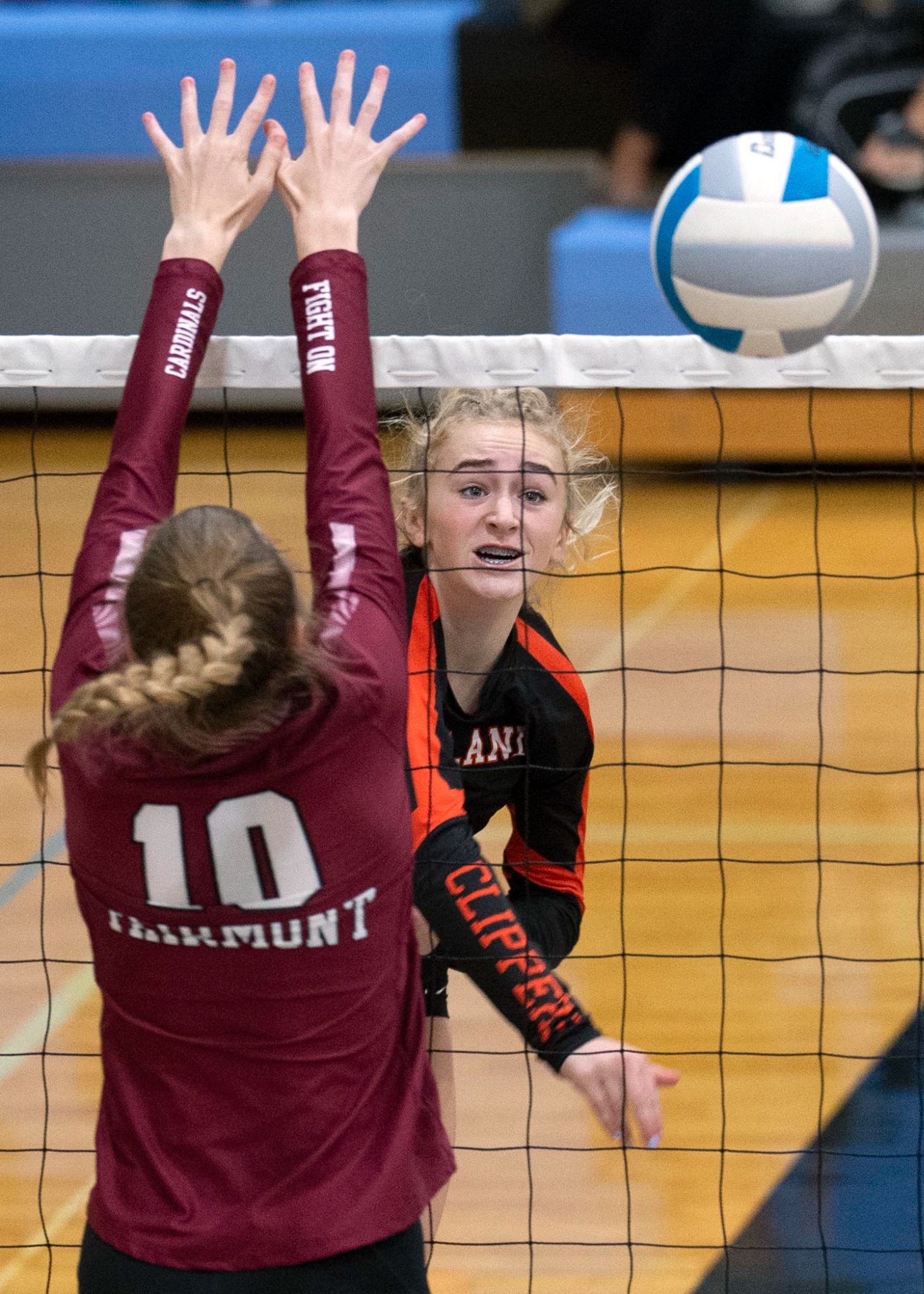 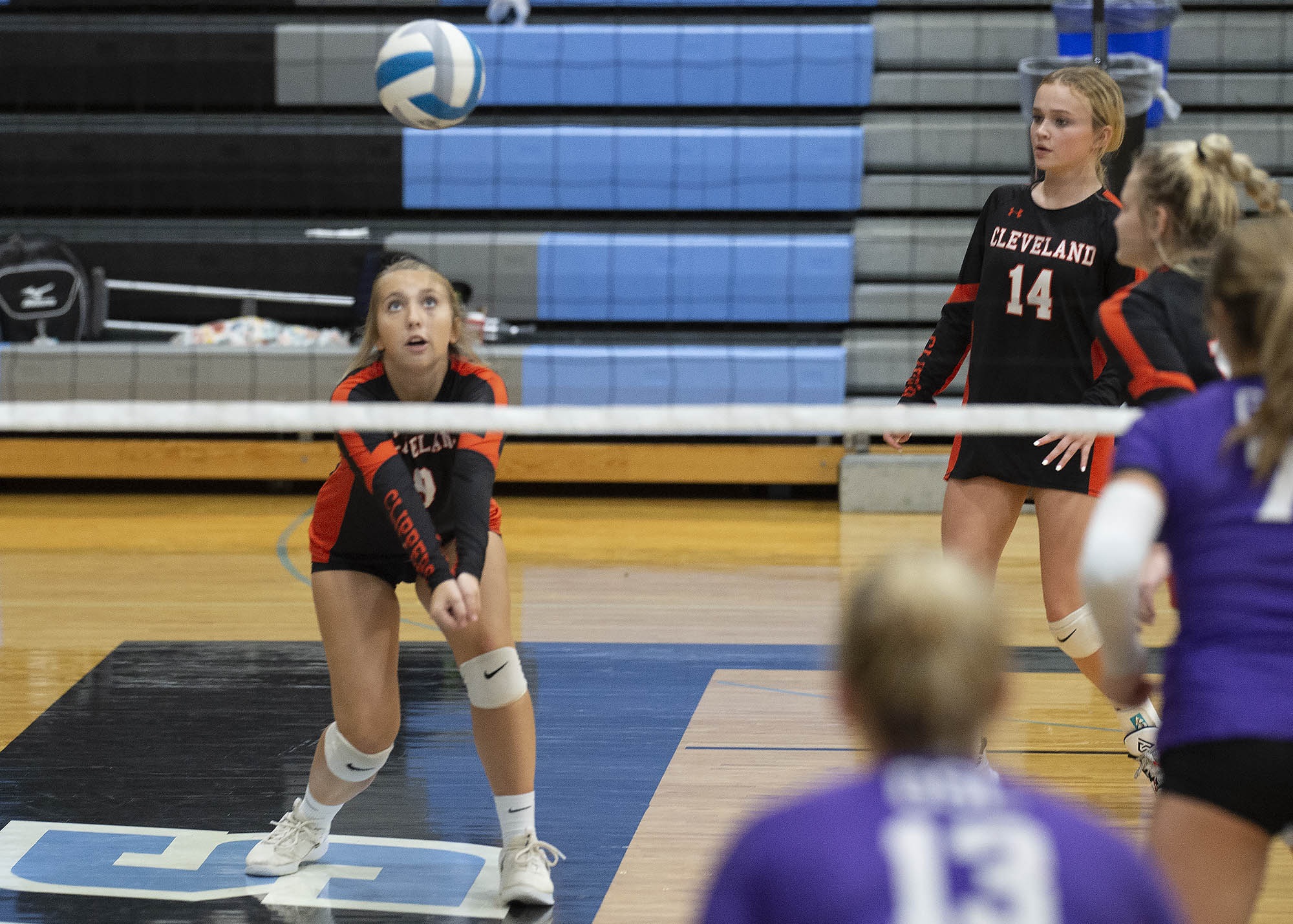 Allison Jindra on the dig against Glencoe-Silver Lake.