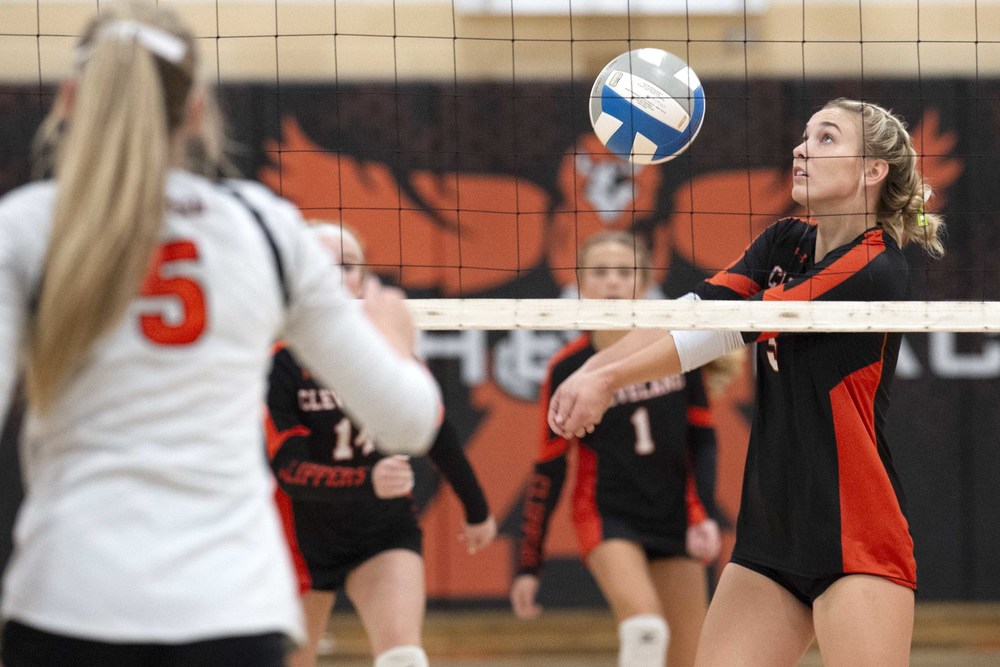 Win at Madelia puts Clipper girls back on track

Above: Taylin Gosch bumps the ball near the net.

But Kern said her leg was feeling fine, and the Clippers are letting go of last week’s loss to Alden-Conger, a defeat that kept them from winning the Valley Conference title. After an easy victory in game one against the Knights—who won the conference last year—the Clippers melted down after Kern left game two with the injury.

“We’ve moved past it,” said the senior, who plans to continue her career at a collegiate level next fall. “We can’t keep looking back at it. We have to keep moving forward and focusing on the matches we have left and on playoffs.”

And the Clippers did keep focused at Madelia, easily coming out on top, 3-0.

Game one started on a Blackhawk error and ended 25-15 on a Harley Connor kill.

The Clippers sent a serve out of bounds to start game one, but Taylin Gosch pushed the ball into empty Madelia floor for the next two points, and with Blackhawk miscues and a couple of Kern kills, the Clippers were suddenly up 8-1.

After a Grayce Kortuem ace tip for Clipper point 23, the game ended 25-13 when Madelia didn’t field a Clipper return.

Game three started in the Clippers’ favor with a Gosch attack and punctuated on a Connor ace spike.

With a 4-4 record, the Blackhawks rank in the middle of the Valley, but head coach Bree Meyer said the Clippers probably made them look not as good as they are.

“It’s kind of like us when we play Mayer Lutheran."

Leaving her mark on Madelia’s court and the hawk that watches over it, Kern had 13 kills. She also added seven ace blocks and three digs.

Playing around the horn, Kortuem racked up five ace blocks, three digs, two set assists and was six of six in serving. Gosh set up 24 points and also had three kills, two blocks and a trio of service aces. Connor had five kills and five blocking aces.

Ava Hahn had five kills and four digs. Maddy Steen had three kills and a pair of digs. Jordyn Klingel had one dig. Greta Hahn had five digs and one kill. Savannah Meyer had six digs and was perfect in her dozen serve attempts. Zoe Porter had two ace serves and one dig.

The Clippers close out their regular season on Tuesday with a match at Lake Crystal.

Savannah Meyer hoists up a Madelia serve. Behind her is Jordyn Klingel.

Emily Kern follows through after a hit.

Ava Hahn reaches for a hit.