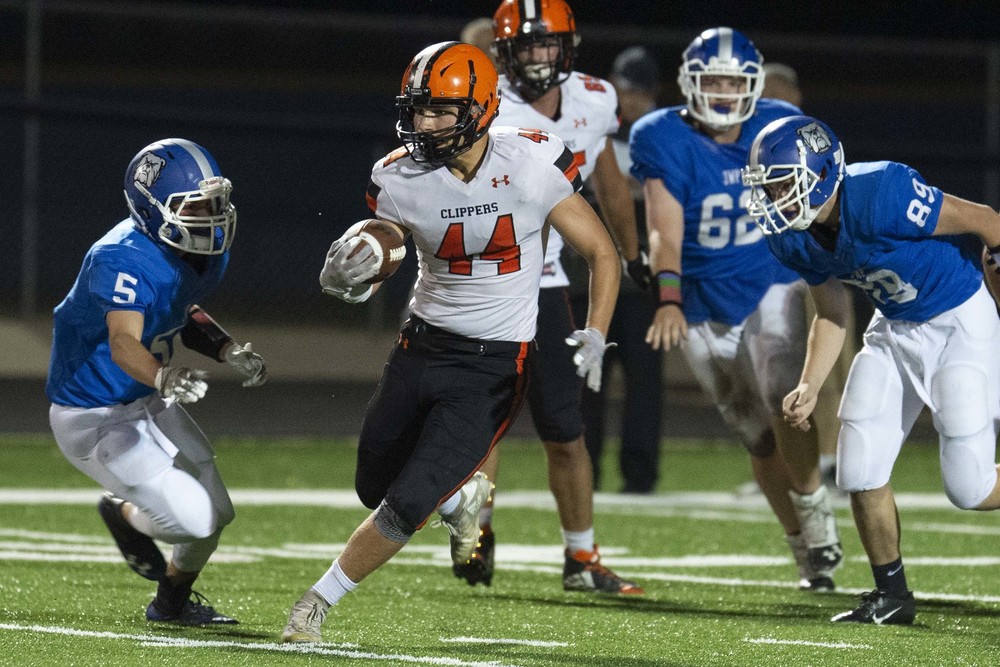 Above: Fisher Knish was back on the field after suffering a hip injury last week. He ran for 80 yards and the Clippers’ only TD.

Cleveland 8, host JWP 6 had the strategy of a chess match.

While the Clipper offense kept the ball close to the hip for most of the 48 minutes on Friday and worked the clock after scoring early, their defense did its job just as the coaches had planned.

“We knew we could be conservative because we knew our defense could stop them,” said head coach Erik Hermanson. “Unless there was a broken play, they weren’t going to sniff the end zone, and we were right.”

Meanwhile, senior-receiver-turned-quarterback Carter Dylla, in his second stint behind center for the injured Blake Lyons—and as a defensive back as well—was everywhere he needed to be.

After a Fisher Knish 2-yard run capped off a 65-yard drive in the Clippers’ first possession, Dylla took the snap on a fake PAT kick and rolled left for the 2-point conversion.

Designed by special teams coach Brady Hahn, the play ended up being the difference.

With 6 minutes left in the third quarter, when the Bulldogs took over on downs at their own 45, quarterback Karson Lindsay, who QBed the Clippers four seasons ago after starter Alex McCabe was injured and then transferred to JWP the following year, completed a 25-yard pass and followed it up with a 21-yard touchdown throw.

But when Lindsay rolled right on the point after, it was Dylla who pinned him in front of the goal line to preserve the Clipper lead.

Late in the match, Dylla struck a third time

After JWP took over on their 27, Lindsay completed a 31-yard pass that, with the couple of runs that followed, put the Bulldogs on the Clipper 32. But Dylla halted the drive with an interception on the 20.

“That last drive they had where they threw the pick in the red zone, everyone was getting all nervous and thinking ‘Oh no. Here we go again.’” Hermanson said. “But coach Matt Miller up in the booth said ‘Our defense always makes a play when we need it. Don’t worry. Everybody just do your job. Do what you were taught,’ and that next play, Dylla picked it off.”

“It was kind of broken coverage,” Dylla said. “It was like a scramble play. I was watching his (Lindsay’s) eyes, and he kind of juked to the right, and I saw the wheel (wheel route), and I just jumped the wheel. I was fortunate we got a good pass rush, and it forced him to throw that ball, so I couldn’t have done it without the guys up front.”

With a couple of minutes left, the Clippers were all about draining the clock. And they almost did, but Dylla, on third-and-5, kept the ball and slid in bounds for only 4-yard gain. Just in front of the first-down marker, he could have easily ran out of bounds beyond it.

But given all that Dylla had done beforehand, the mistake was an easy one to forgive.

“He’s so smart,” Hermanson said. “He’s athletic, and he’s watched the game, so he knows, but even on that last drive he easily had the first down. But I know what he’s thinking. Because he’s smart, he’s going to slide and keep the clock running.”

With the Clippers playing conservatively on fourth-and-1, Henry Strobel’s punt was what the Clippers needed. It landed on the JWP 15, and the Bulldogs took over with 47 seconds remaining.

Lindsay completed throws of 9 and 11 yards, and with 7 seconds left, the Bulldogs pulled out the hook-and-ladder. With a successful exchange after the pass completion, it looked like the trick play might work, but once again it was Dylla, this time making the tackle with no time remaining to save the touchdown.

“It’s definitely our biggest rival, and they gave us their best game of the year because they knew it was a good chance for them to win because we’re down to our third quarterback, we’re playing freshmen,” Hermanson said. “I’m just glad our seniors were tough enough, worked hard enough, especially Fischer after getting pounded last week, and his hip is still sore, but he ran like a senior that wanted to win a game.”

Knish said even though the Bulldogs were winless, the Clippers took them seriously.

“I think everyone came into this week not thinking ‘oh, this is Janesville, we can blow them out,’” said the 205-lb senior, who was back on the field after getting carted off in an ambulance last week. “But we came in this week thinking we’re playing a team that can legitimately beat us. I think that made the difference because everyone came out with that fire. The defense did what it was supposed to. We kind of locked up everything. There were a few blown coverages here and there, but it was mostly sound, solid defense.”

Dylla completed five of only nine pass attempts for 28 yards and kept the ball 11 times for 43 yards.

“It helps when I got more than two practices, like last week, and I know the plays we’re running,” Dylla said. “I just have to play the role with guys down. That’s what I’ve got to do.”

Kolby Gens hauled in two passes for 10 yards. Strobel and freshman Kale Kelley each caught one pass for 9 yards. Knish caught one pass, but it was for zero yards. He also bulled 19 carries for 80 yards.

Defensively for the seniors, Dylla had 10 tackles. Lucas Walechka had seven tackles with two of them behind the line and one a sack. Jacob Anderley and Cade Kriha each had six tackles. Knish had five tackles.

Tanyon Hoheisel had five tackles with one behind the line. Carter Barto had two tackles and one sack.

Joining Jackson Meyer and Lyons on the sideline was Tommy Kennedy with a knee injury. Wyatte Devens was back in action, but Kaleb Timlin was limited to just a few plays.

The Clippers host Alden-Conger/Glenville-Emmons for homecoming on Friday. Like JWP, the Knights are still looking for their first win. 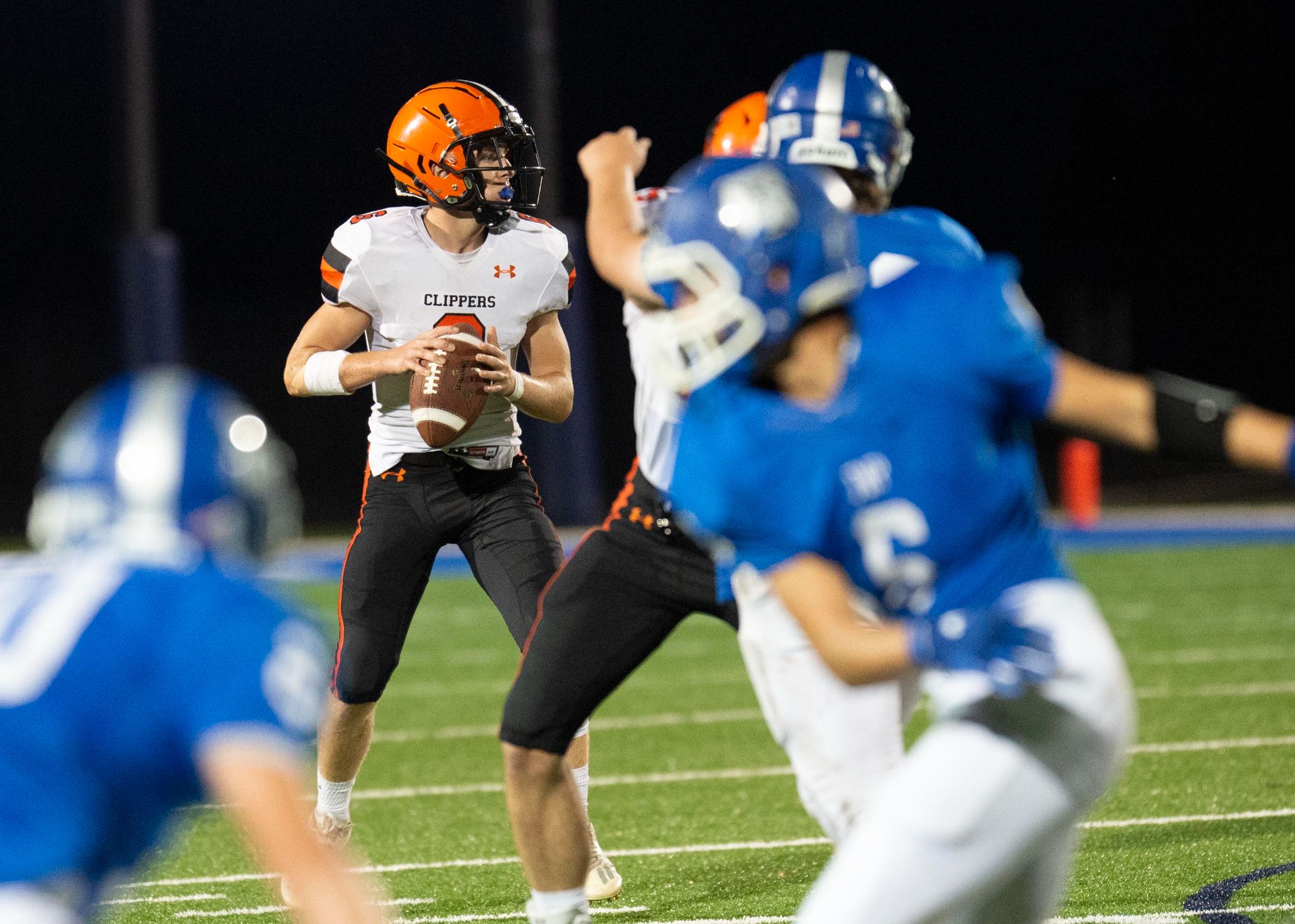 While Carter Dylla is settling into the QB role, the Clipper coaches would like to get him back to being on the other end of a pass play. 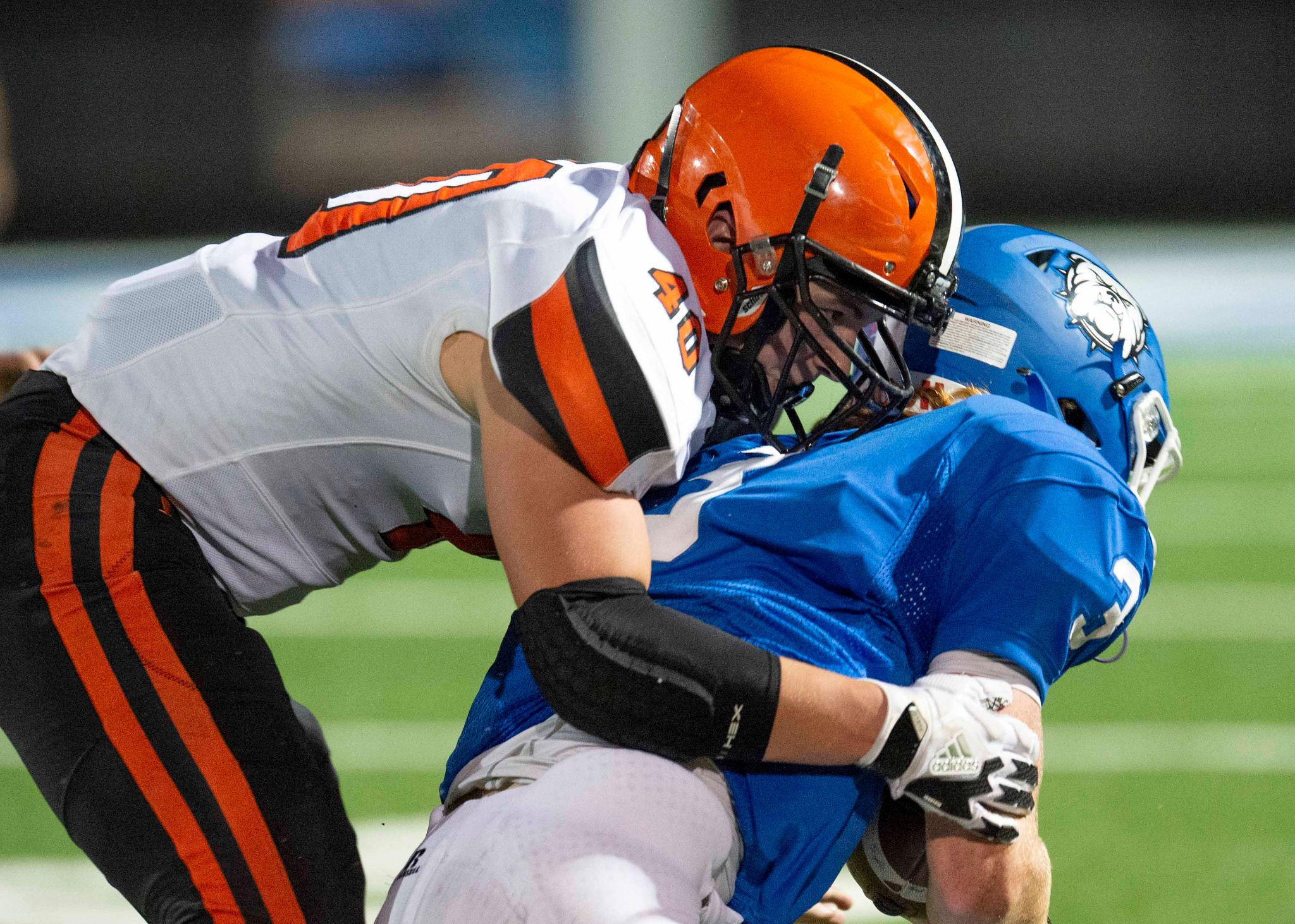 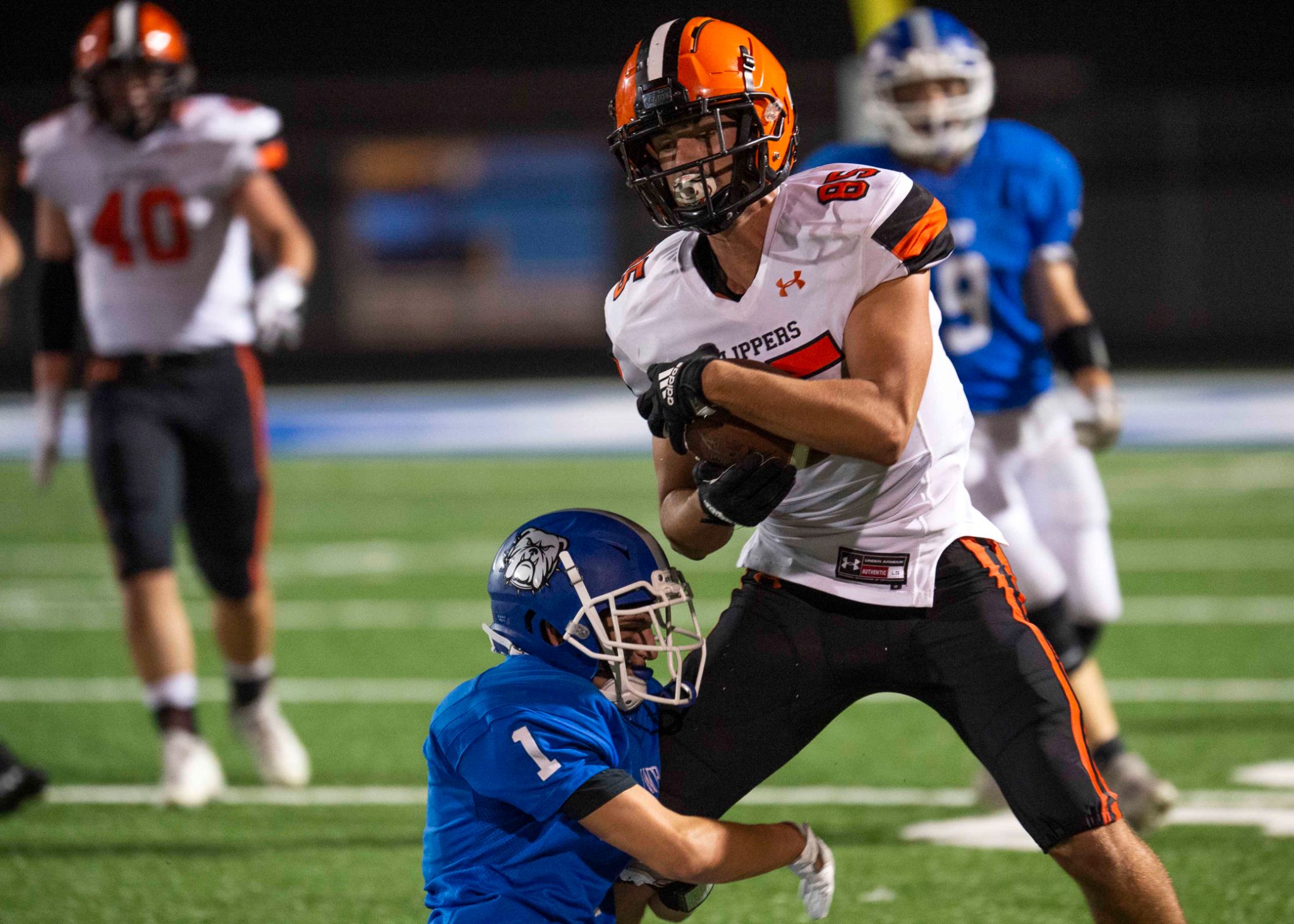 Kolby Gens fights a JWP defender after hauling in a Carter Dylla pass. 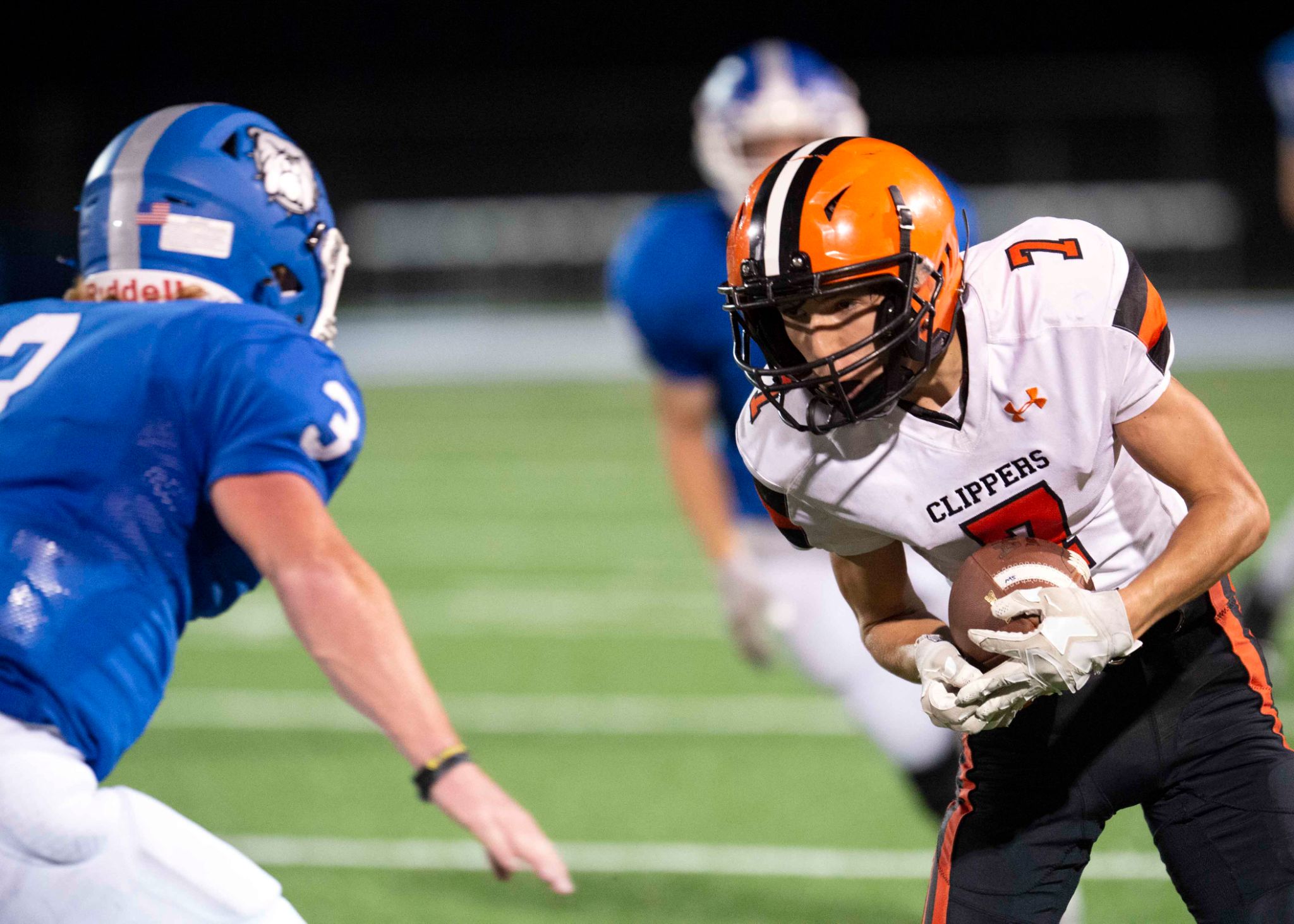 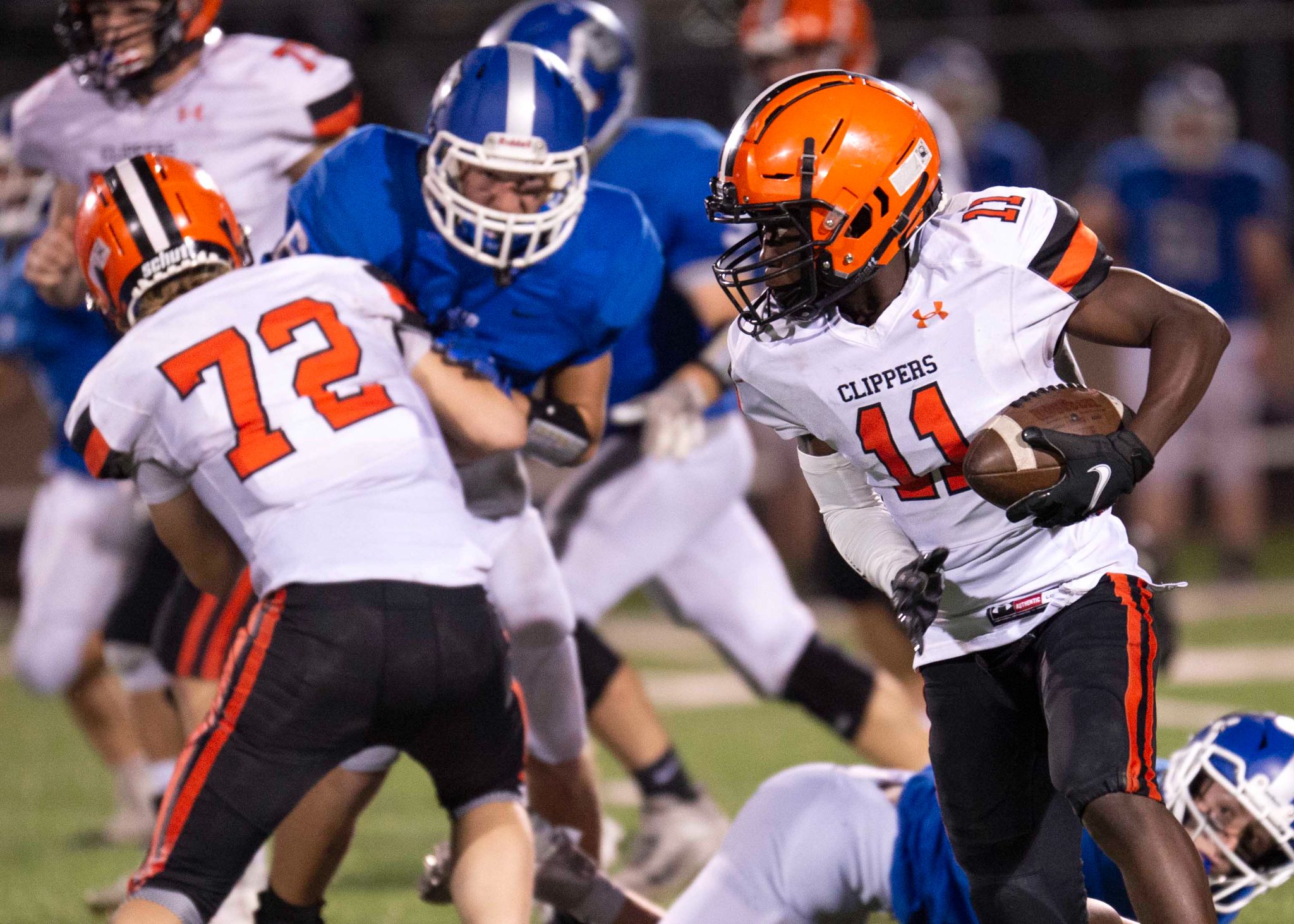 With Cade Kriha creating an opening, Henry Strobel scoots around the JWP defense. 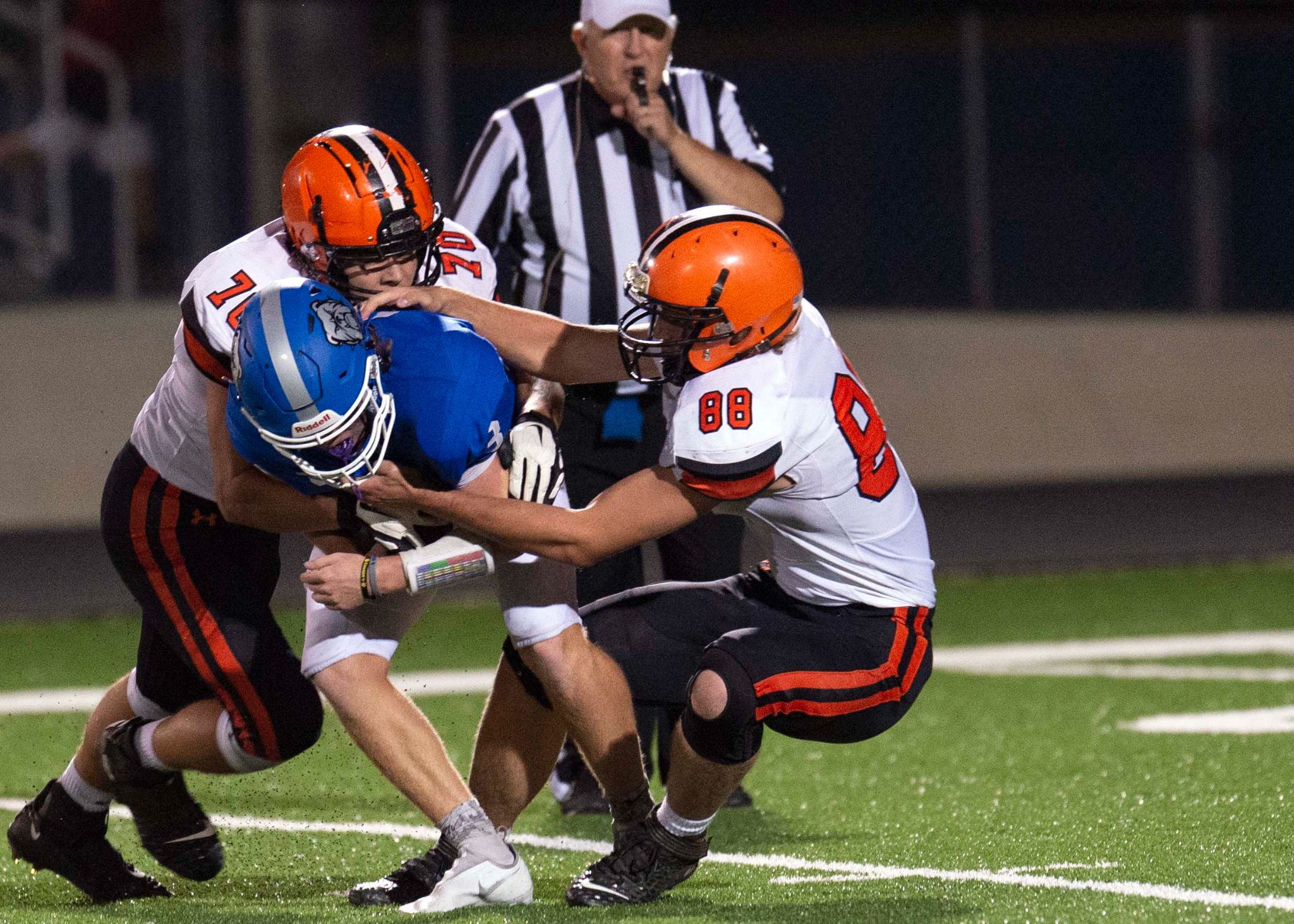 Lucas Walechka and Carter Barto team up for a sack.