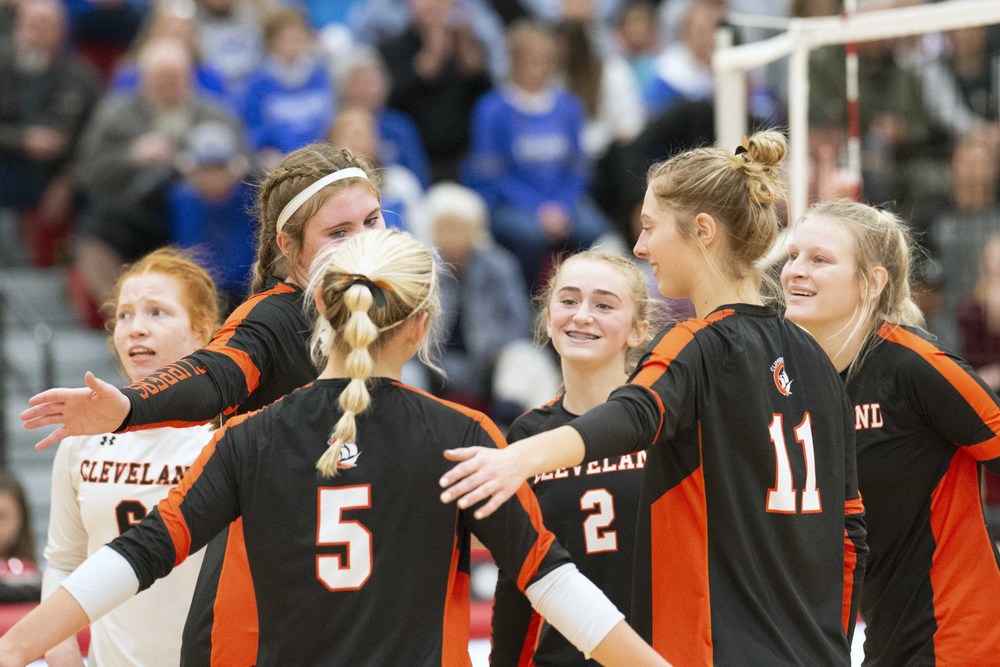 Above: Emma Sweere, Emily Kern, Taylin Gosch Ava Hahn, Harley Connor and Grayce Kortuem celebrate a point as they close in on a match victory.

Meeting Cleveland for the third time this season, Janesville-Waldorf-Pemberton put up a valiant effort on Tuesday in the subsection semi-finals on the neutral St. James court, but the Clippers came out on top 3-1.

The Clippers had beaten JWP in four sets in their first home game this season and then won both sets against the Bulldogs during the Tri-City United tournament in early October. But JWP did a good job on Tuesday working over Cleveland’s front row and pulling up Clipper hits.

“I knew they would not go out without a fight,” said head coach Bree Meyer. “They’re scrappy, and yes, we played them twice before, but they didn’t stop fighting. They didn’t get down. They kept on playing for every point.”

The Clippers, top seed in the south subsection, travel to Mankato East on Thursday for a 6:00 pm game against second-ranked Cedar Mountain for the subsection championship.

Stringing together a couple of kills and ace blocks with an ace serve, the Bulldogs—who easily beat fifth-ranked Madelia to earn the right to play the Clippers—went on a 5-point run in game one to pull in front 6-3. It was a lead they would never relinquish. Capping off a 4-point spurt, the game ended 25-15 on an ace block.

While Meyer was ready for a hard fight, Grayce Kortuem was expecting the match to be easier.

“They really came out here and surprised us all tonight,” said the senior hitter. “We’ve had a couple of easier wins against them, so I think we were just big in the head when we came in, but after we realized that they were coming out a lot stronger, we kicked it into gear.”

An Emily Kern ace block was the first Clipper winner in game two and put them ahead 3-1. Spreading around the attack, the Clippers kept up front and were leading 14-10 when Kortuem limped off the court after landing on Taylin Gosch’s foot.

The Bulldogs won the next three points, but the Clippers regained composure. Ava Hahn dropped down a hit, Kern followed up with a kill, Gosch tapped over an ace, and Hahn swatted another kill that put the Clippers up 18-13.

While Kern went on the attack, the Bulldogs had trouble keeping the ball in play, and the Clippers scored seven of the last eight points for a 25-17 victory.

With Kortuem still sidelined in game three but Kern lighting it up, the Clippers managed to keep in front, but the Bulldogs pulled within a point, 19-18, after a kill, a Clipper hit in the net and a serve the Clippers watched skid to the floor. From there, the Bulldogs errored twice and then climbed back within a point after a couple of kills.

But complementing Kern, Hahn went on a riot, starting with a push to open floor and then a couple of kills. The game ended 25-21 when the Bulldogs got caught in the net.

When the Clippers took the floor in game four, Kortuem was back in the lineup.

“The athletic trainer said I could go back in if I could jump on it without making a face. I didn’t make a face.”

With kills by Kern and Hahn and ace blocks by Kern and Laci Hollerich, the Clippers went up 4-2, but the Bulldogs took advantage of a trio of Clipper errors to take a 8-7 lead.

Hahn angled a couple of hits to the floor to put the Clippers up 10-8, but they lost the lead a couple times after that until a Kern kill started a 5-point Clipper rally.

Up 20-15, the Clippers committed four errors in a row, but the Bulldogs socked the ball into the net, and Kortuem knocked down an ace block for a 22-19 Clipper advantage. With a Hahn kill followed by a Kortuem ace block and ace tip, the Clippers scored the game’s final three points for a 25-21 win.

“I was in pain, but the adrenaline really pushed me through,” Kortuem said. “I wanted this win more than anything.”

Kern racked up 17 kills, six blocks and a dozen digs. Ava Hahn had 12 kills, a pair of ace serves and 11 digs. Kortuem had two kills and two ace blocks. Hollerich had seven kills. Gosch passed for 30 assists and had 24 digs. Greta Hahn hoisted 20 digs and safely landed all 12 of her serves. Savannah Meyer was 14 of 14 from the service line and had eight digs. Emma Sweere raised 20 digs. Harley Connor posted a trio of blocks.

Cedar Mountain is ranked second in the south subsection. The Cougars beat third-ranked Springfield in a match that went to five games, including a 20-18 fifth game, to get to the subsection final.

On the north side of the section, top-seeded Mayer Lutheran easily dumped fourth-ranked New Ulm Cathedral and will take on third-seeded BOLD for the sub-section championship. NUC beat second-ranked Sleepy Eye St. Mary’s to get there. 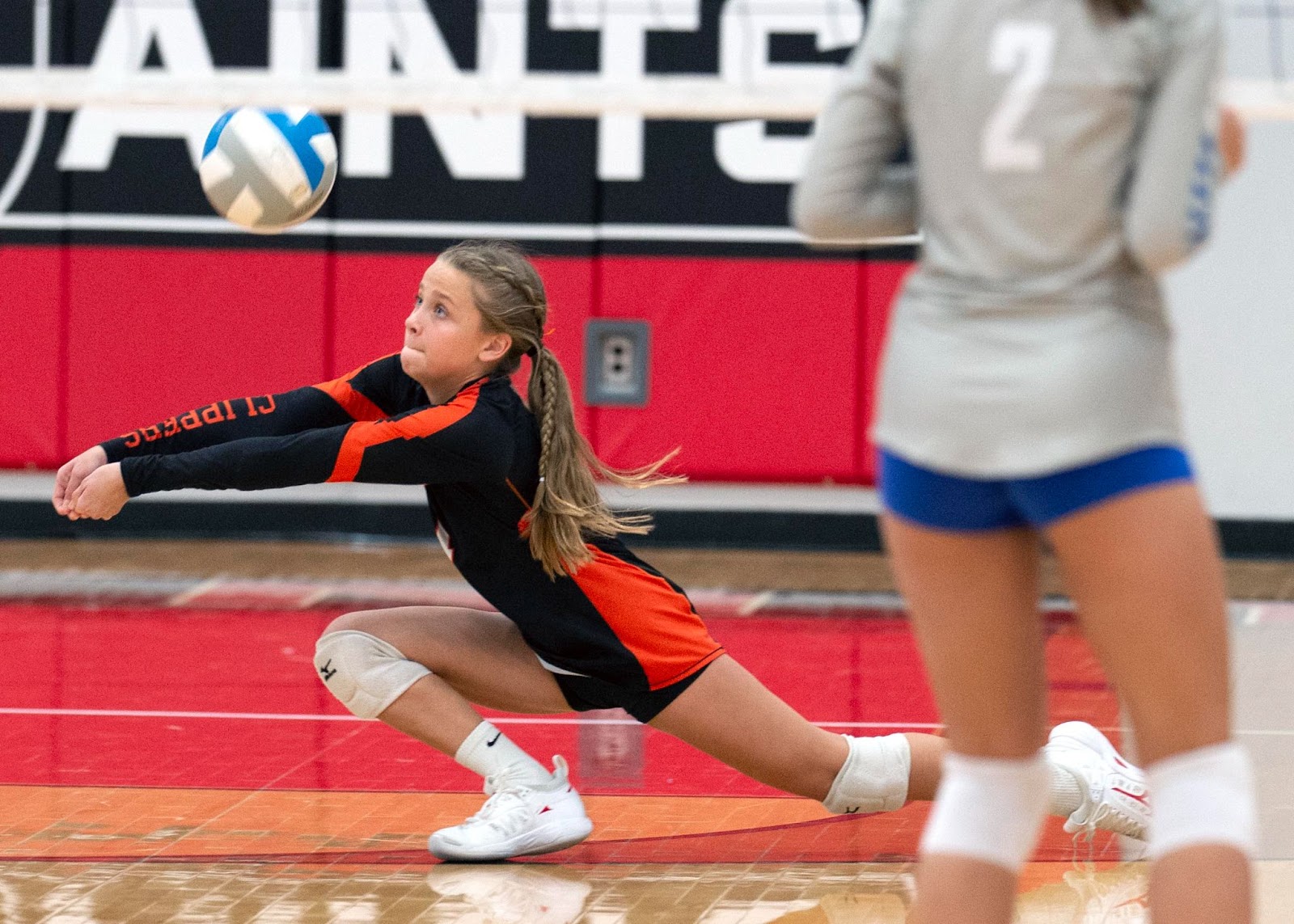 Savannah Meyer stretches for a dig. 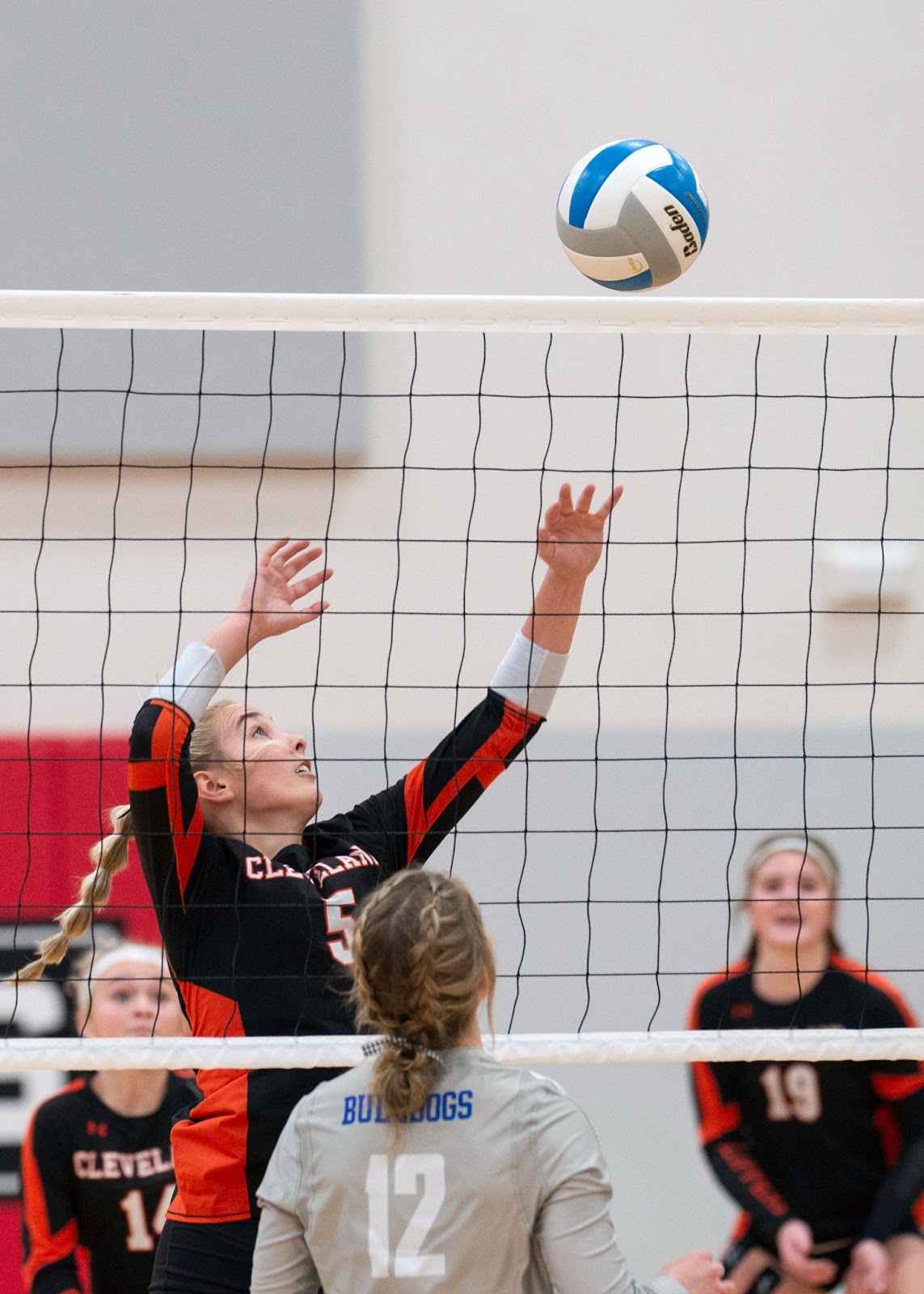 Taylin Gosch pushes the ball over the webbing. 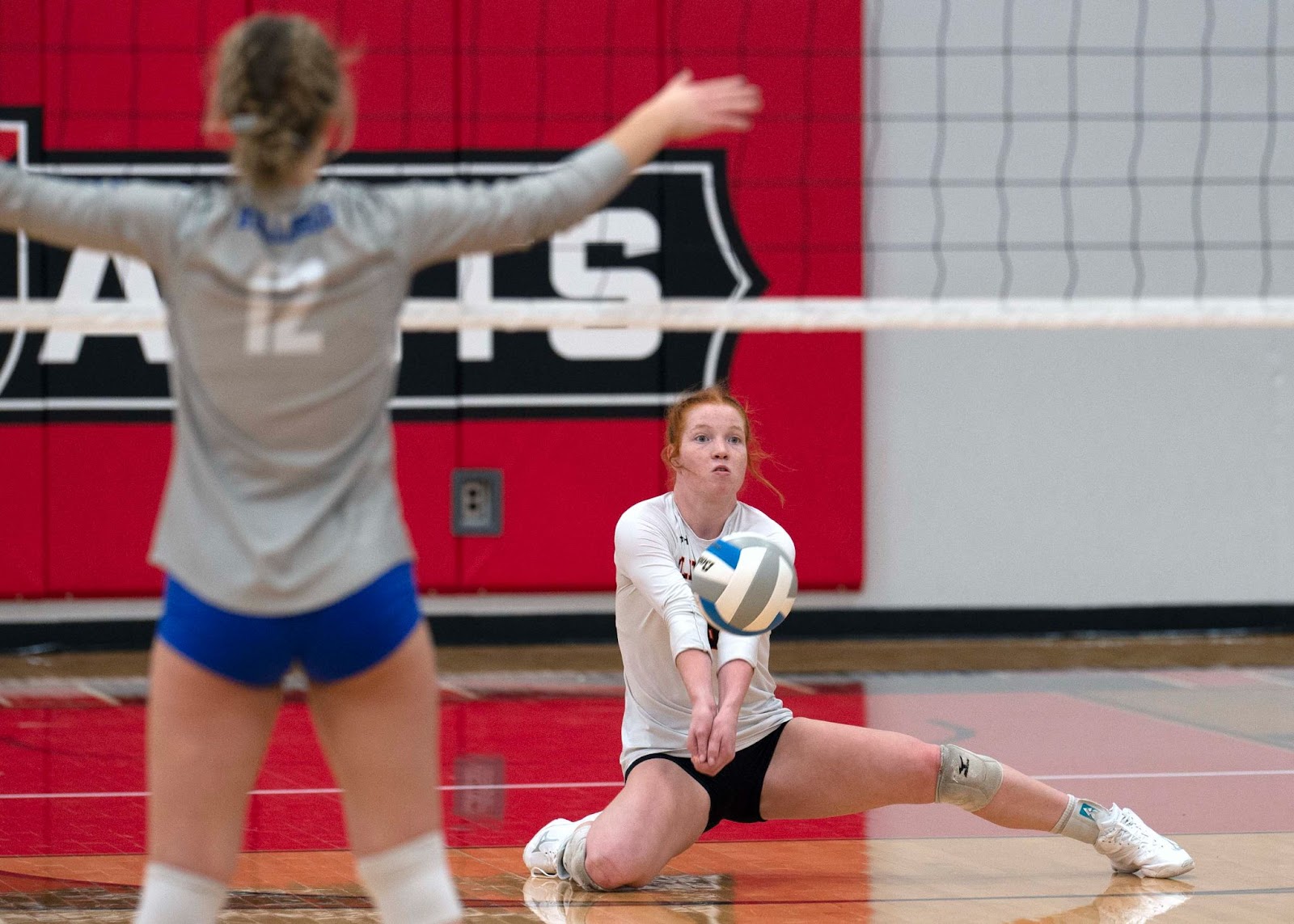 Emma Sweere splits for a dig. 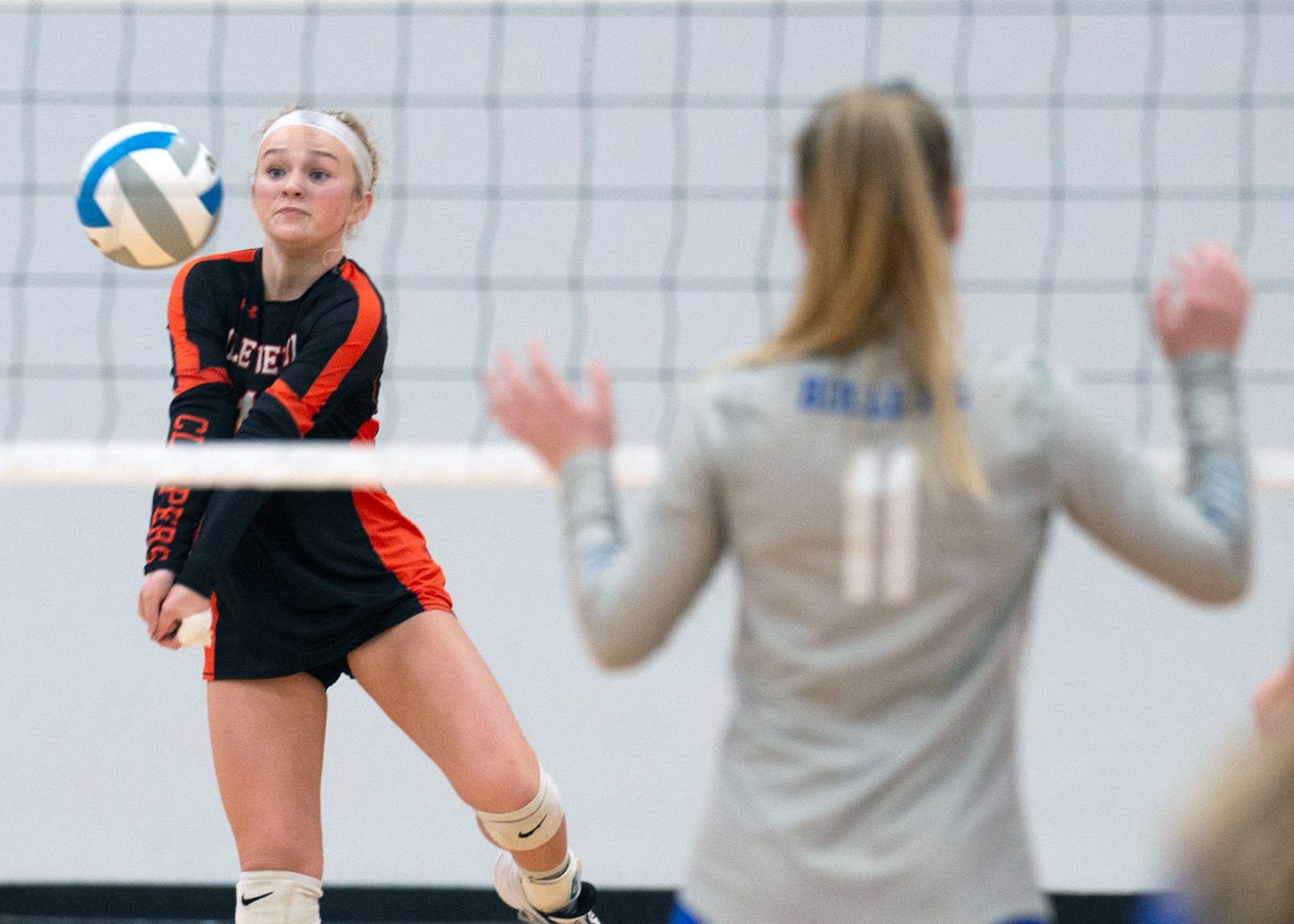 Greta Hahn bumps from the back row. 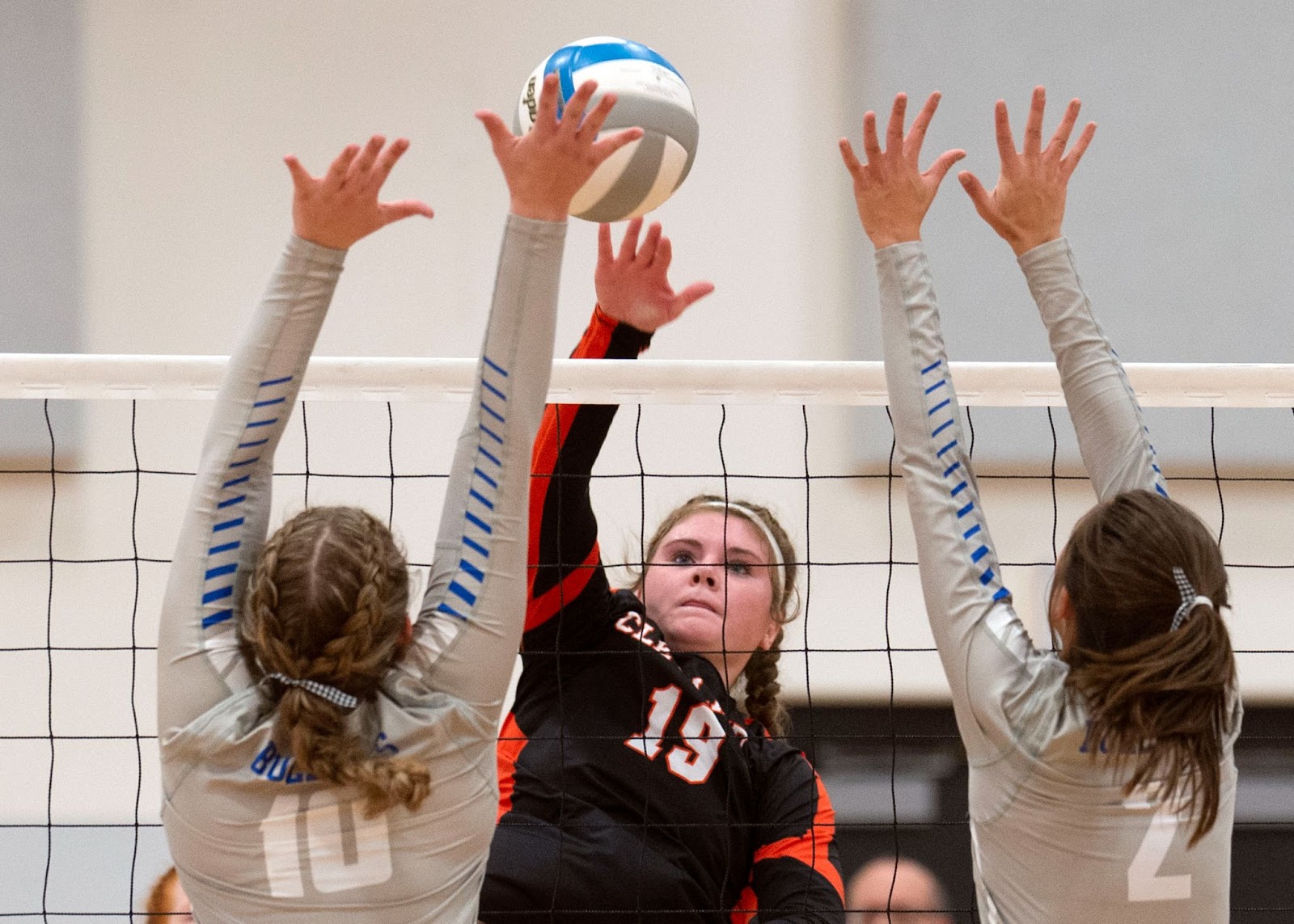 Emily Kern slid this hit between the two blockers for a kill. Ava Hahn passes from the back of the court. 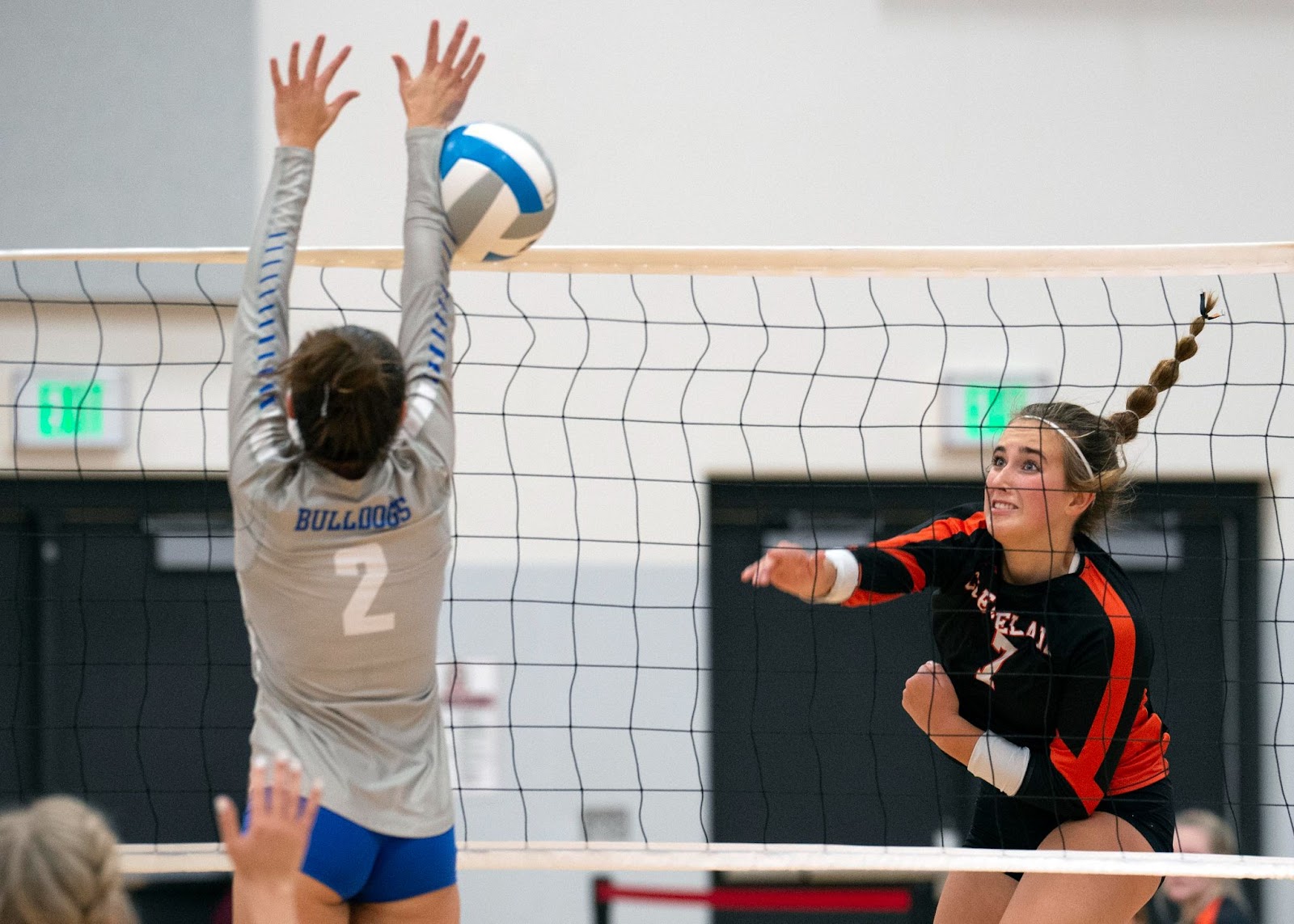 Laci Hollerich follows through on a hard hit. 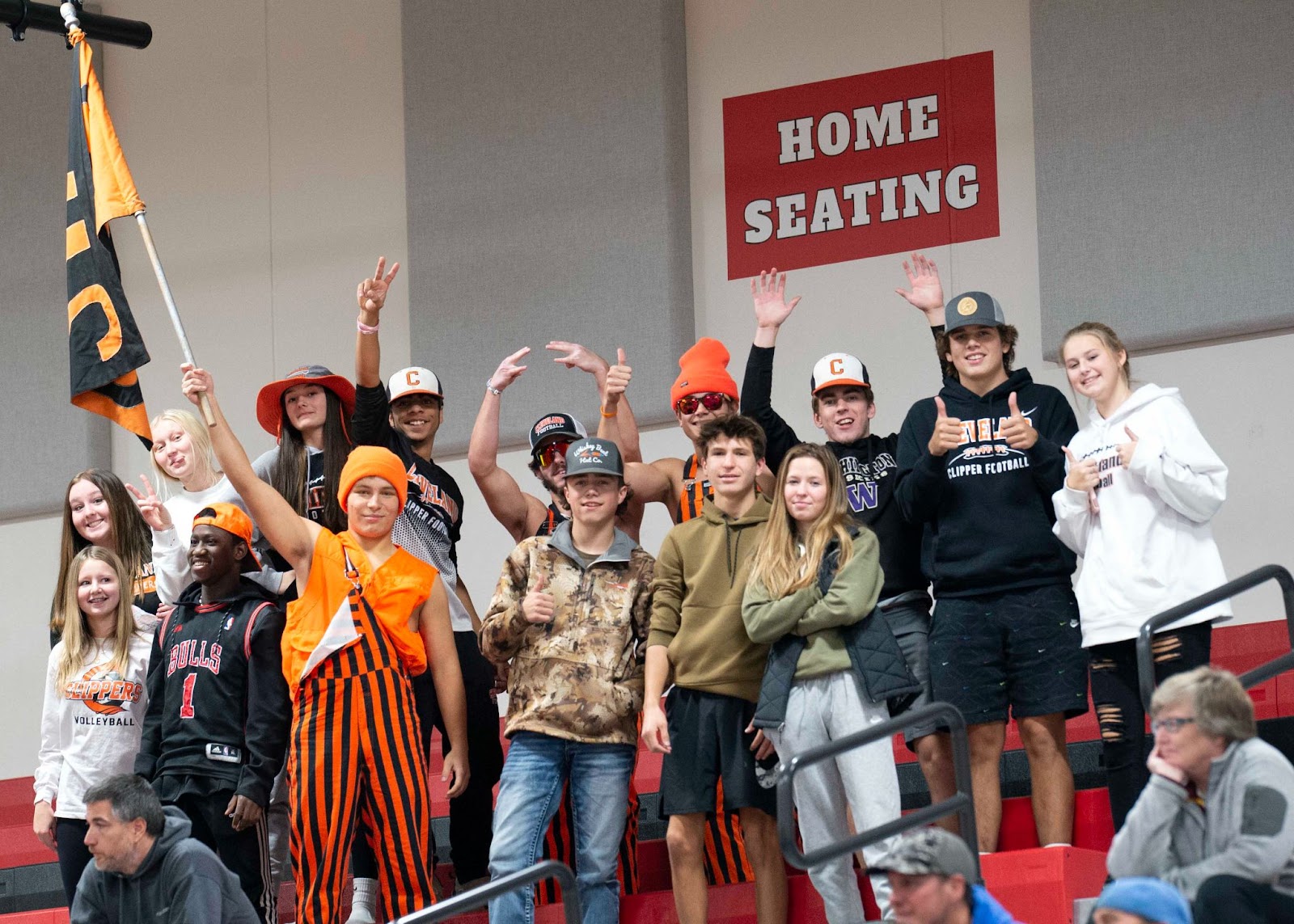 In a switcheroo, some of the boys donned the orange-and-black striped bibs that are typically worn by the girls at football games.