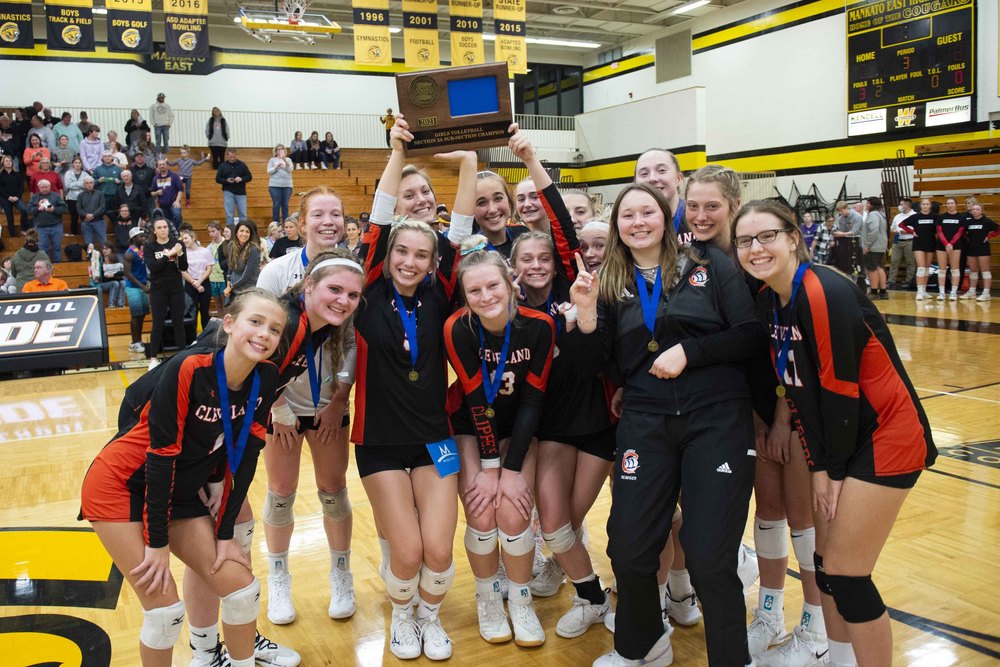 Above: The Clippers celebrate winning the subsection championship trophy.

Since they unfurled the volleyball nets for their first practice in mid-August, the Clipper varsity girls have had their sights set on a subsection championship.

Sweeping Cedar Mountain 3-0 on the Mankato East court on Thursday, they achieved it.

“This is the match I have been waiting for this whole season,” said 6-1 senior middle hitter Emily Kern, “I’m just really happy and proud of my whole team.”

The Clippers will take on Mayer Lutheran for the section championship at St. Peter high school at 6:00 pm on Saturday.

Ava Hahn inaugurated game one with a kill, and Kern followed with her first of what would be 20 kills to put the Clippers up 2-0. The Cougars posted the next three points, but Kern tied the game 3-3 with an ace tip, and the Clippers took the lead immediately after on a Greta Hahn service ace.

The Clippers dialed up their attack force early. And, after Kern and Laci Hollerich each dropped down a hit, Emma Sweere flustered Cedar Mountain with four-straight service aces that put the Clippers up 13-6.

From there, most everything went the Clippers’ way, including a Kern backward bump that fell to the Cedar Mountain side of the floor for a winner. The game ended 25-14 when the Cougars shanked a Kern serve.

“In order for us to win, we had to start off strong,” Kern said. “We couldn’t start off slow. Our offense was really firing. Taylin Gosch’s sets were right on. All our passes were good.”

“I just passed to who was hot at the time,” said Gosch, who ended the night with 34 set assists.

With the Clippers in front 5-3 in game two, Cedar Mountain went on a 7-point run that finally ended when they sent the ball into the mesh. But the Clippers worked their way back and knotted the game 12-12 after back-to-back Ava Hahn kills.

The Cougars pulled ahead on a kill but lost the next 6 points, five on errors and one the result of an Ava Hahn attack. Later, up 23-16, the Clippers let Cedar Mountain gave up 6-straight points, including five that resulted from Clipper errors, to allow the Crusaders to narrow their deficit to a point

“They’re a really good team,” Kern said. “They’re number two in our subsection. They fought for it.”

But Hollerich spiked a winner, and Grayce Kortuem made an over-the-back bump that caught the line for a 25-22 Clipper triumph.

“We analyzed what we did on Monday (vs JWP) and tried to come out strong,” said head coach Bree Meyer. “We worked on a couple of things in practice that we had struggled with.”

Meyer added that after a break of 16 days, getting back into a rhythm with two games so far this week helped.

“It’s keeping consistent instead of having that big gap.”

Cedar Mountain led for most of game three, but an Ava Hahn cross-court kill was the start of an 8-point Clipper rally that put them up 19-15. The Crusaders won the next two points, but after a Kern kill, Ava Hahn tossed over three-straight service aces for a 23-16 Clipper advantage. The game ended 25-18 on a Kern ace block.

Along with her big night on the attack. Kern posted four blocks and one block assist. Hollerich and Ava Hahn each paddled eight kills. Harley Connor uncoiled two kills and put up one block. Kortuem smashed three kills and walled up one block. Emma Sweere shoveled 28 digs and dispatched five ace serves.

After the Clippers’ game, Mayer Lutheran dominated BOLD 25-14, 25-15, 25-5 to win the north subsection. The Clippers met Mayer Lutheran a few times last summer, and in late September they watched the Crusaders win a showcase tournament in Burnsville, where the Clippers were 13th.

“They have a really good team,” Kern said. “We played them in the past, but I have faith that we can do it. We just have to come out and play our game, but no matter what happens, I’m proud of our team and everything that we’ve done.” 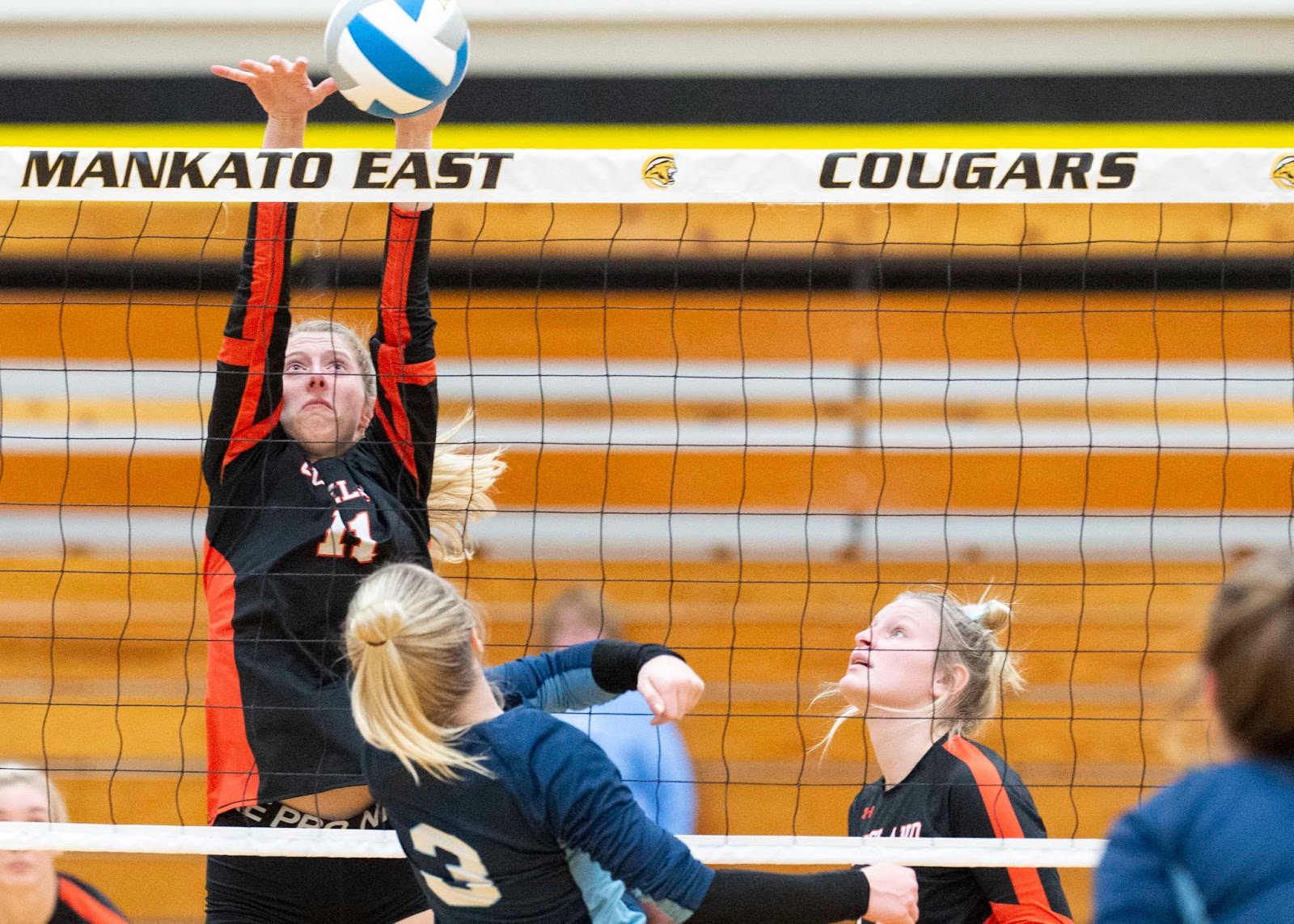 Harley Connor stretches for a block. 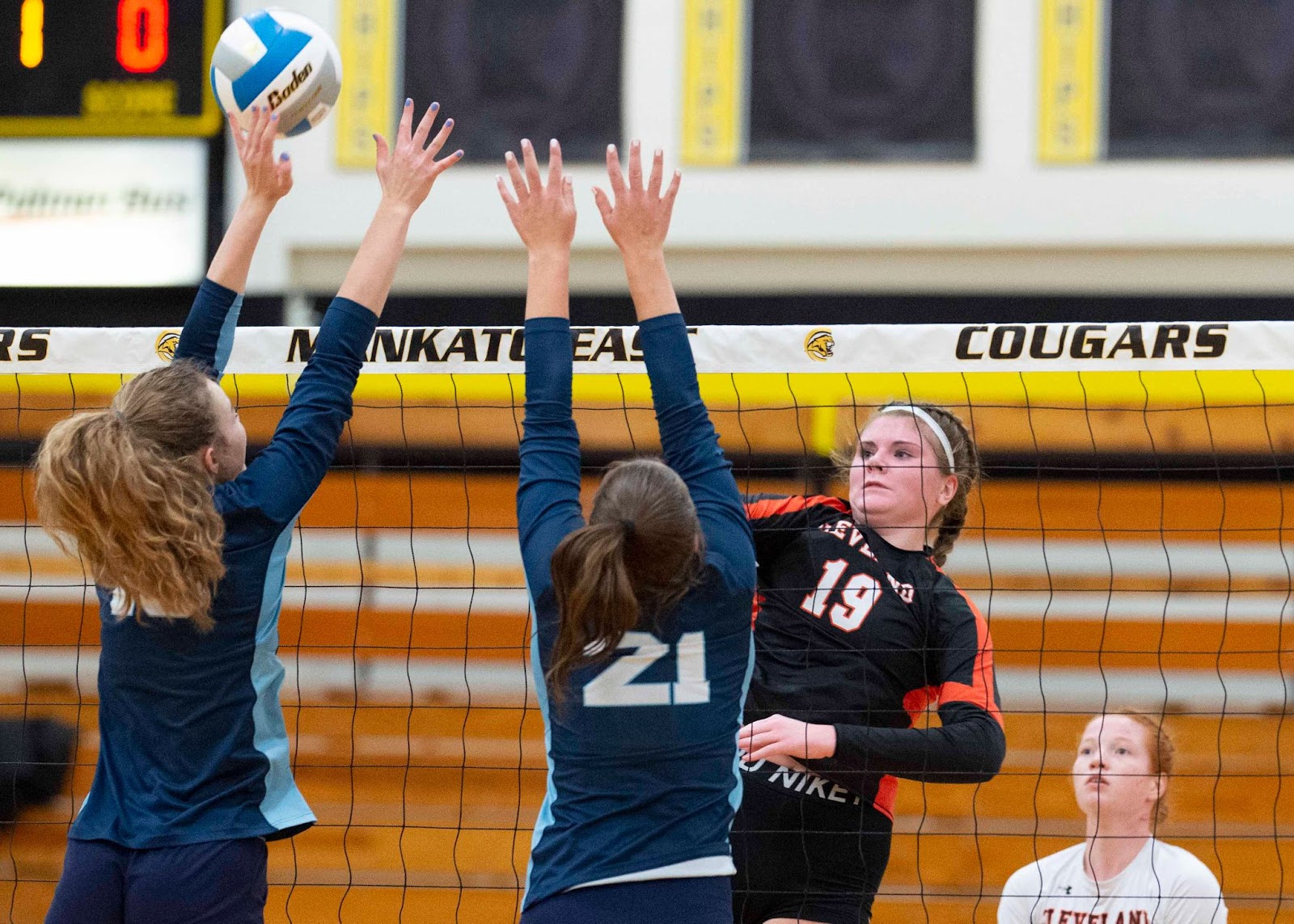 Emily Kern hits the ball over the fingertips of a pair of Cedar Mountain blockers. 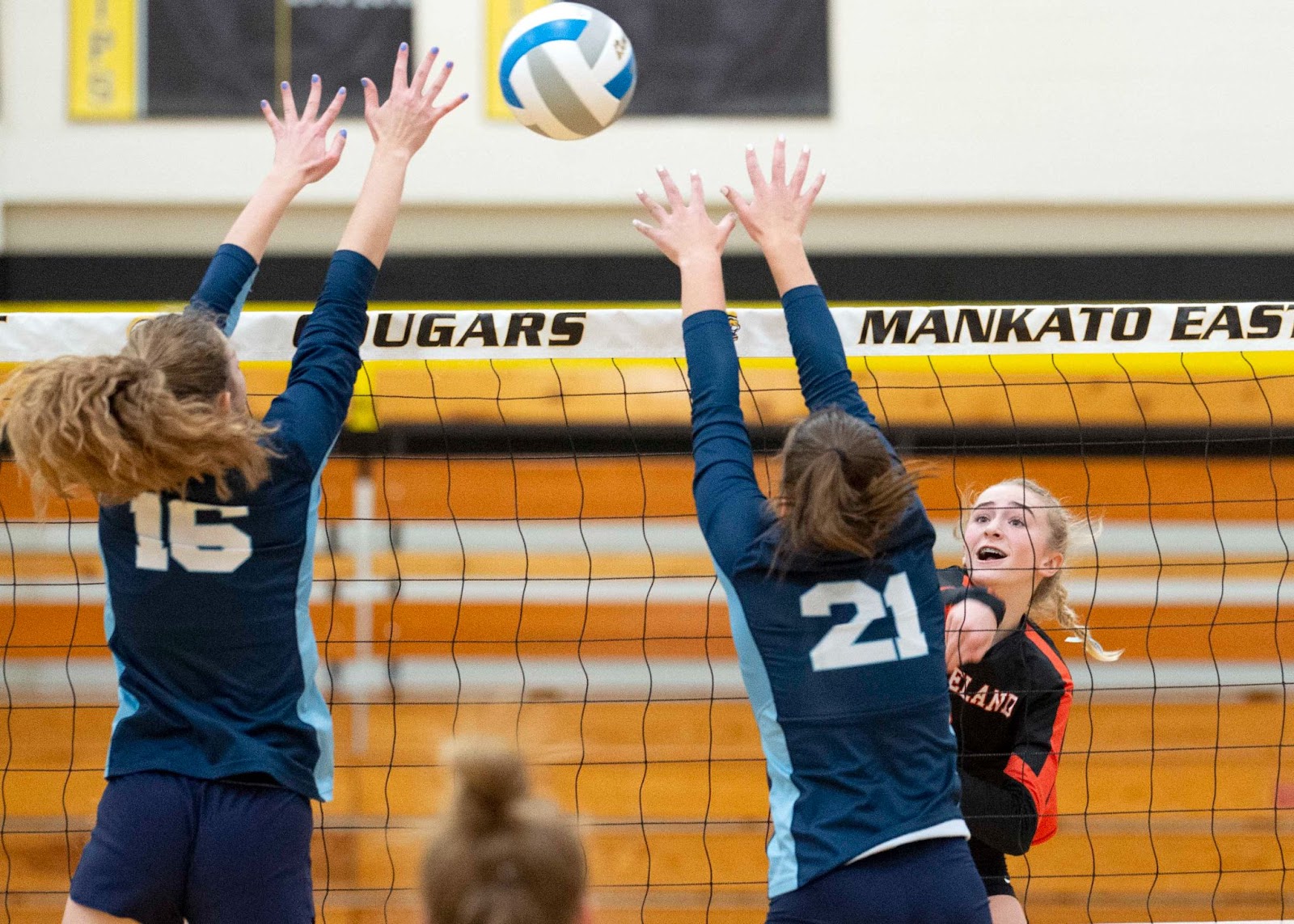 Ava Hahn goes on the attack. 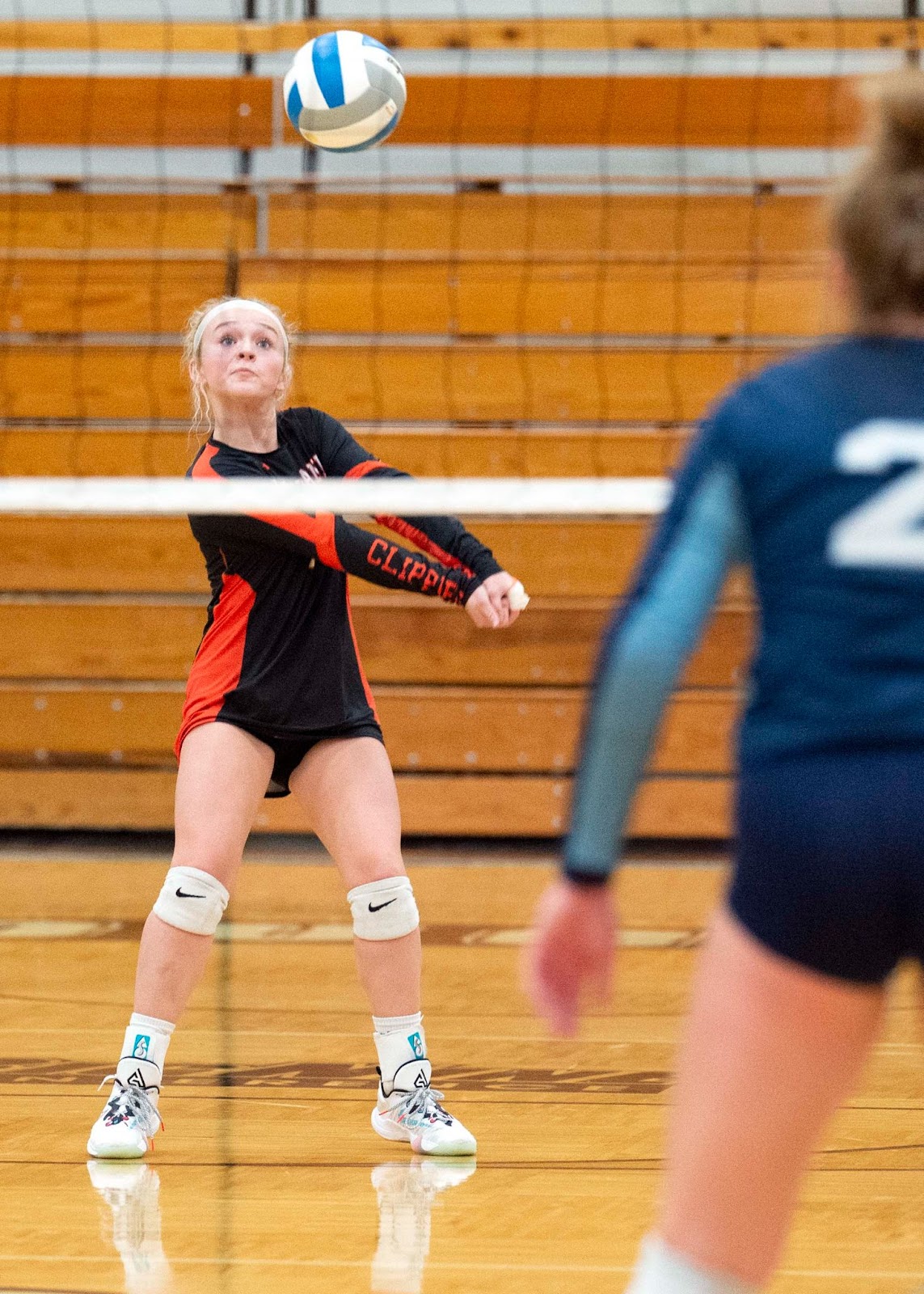 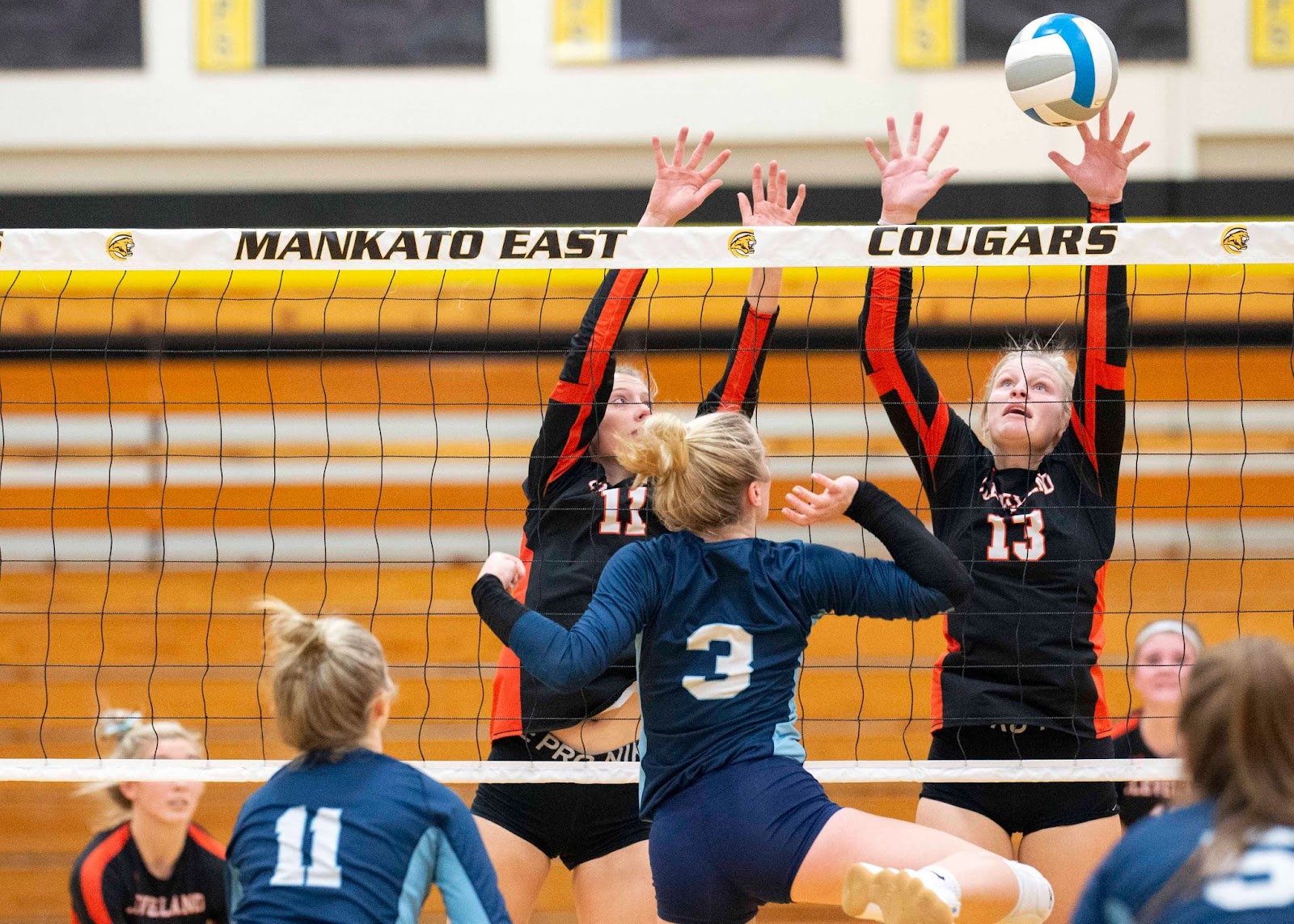 Grayce Kortuem leaps for a block. 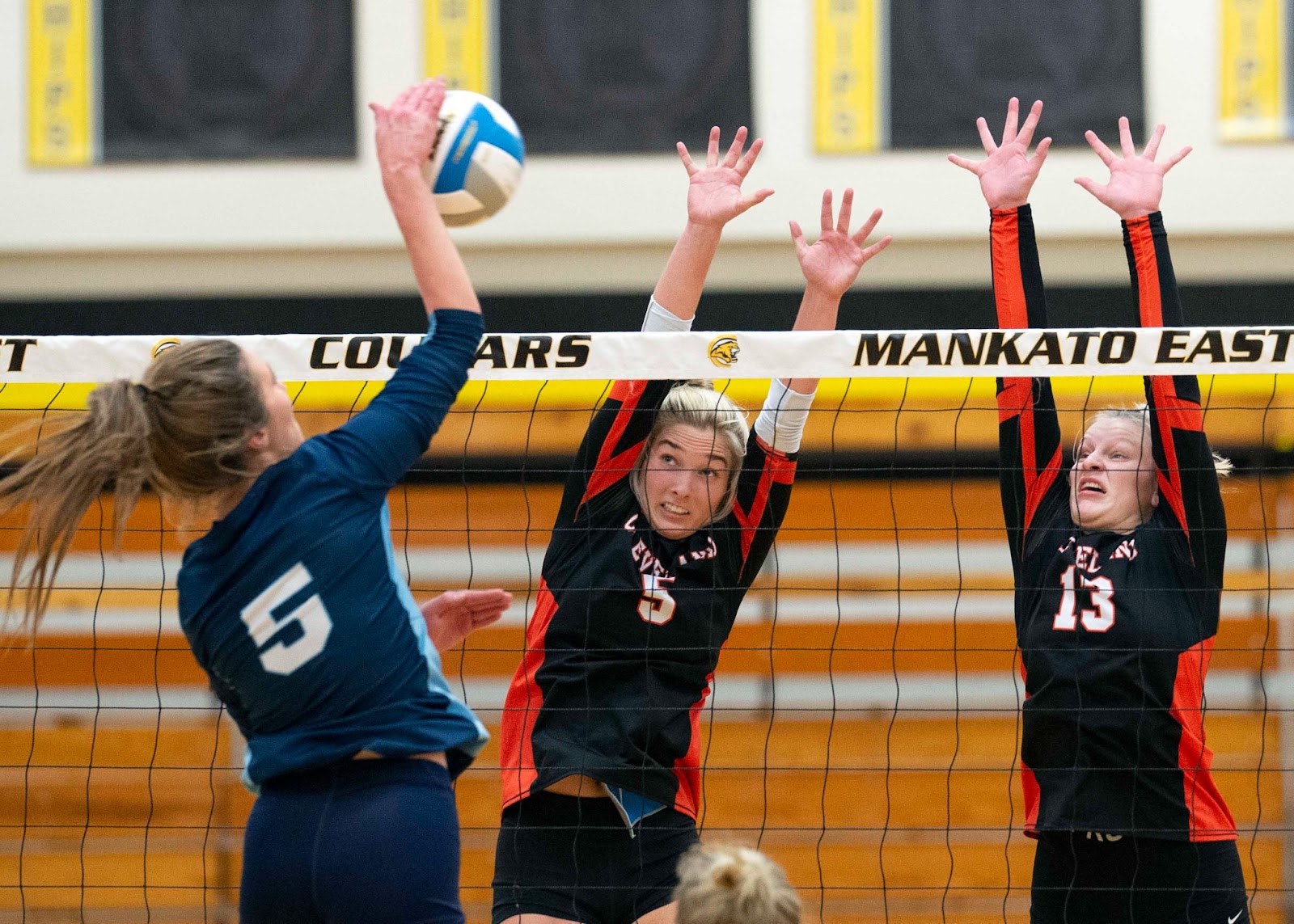 Taylin Gosch jumps up to stop a Crusader hit. Beside her is Grayce Kortuem. 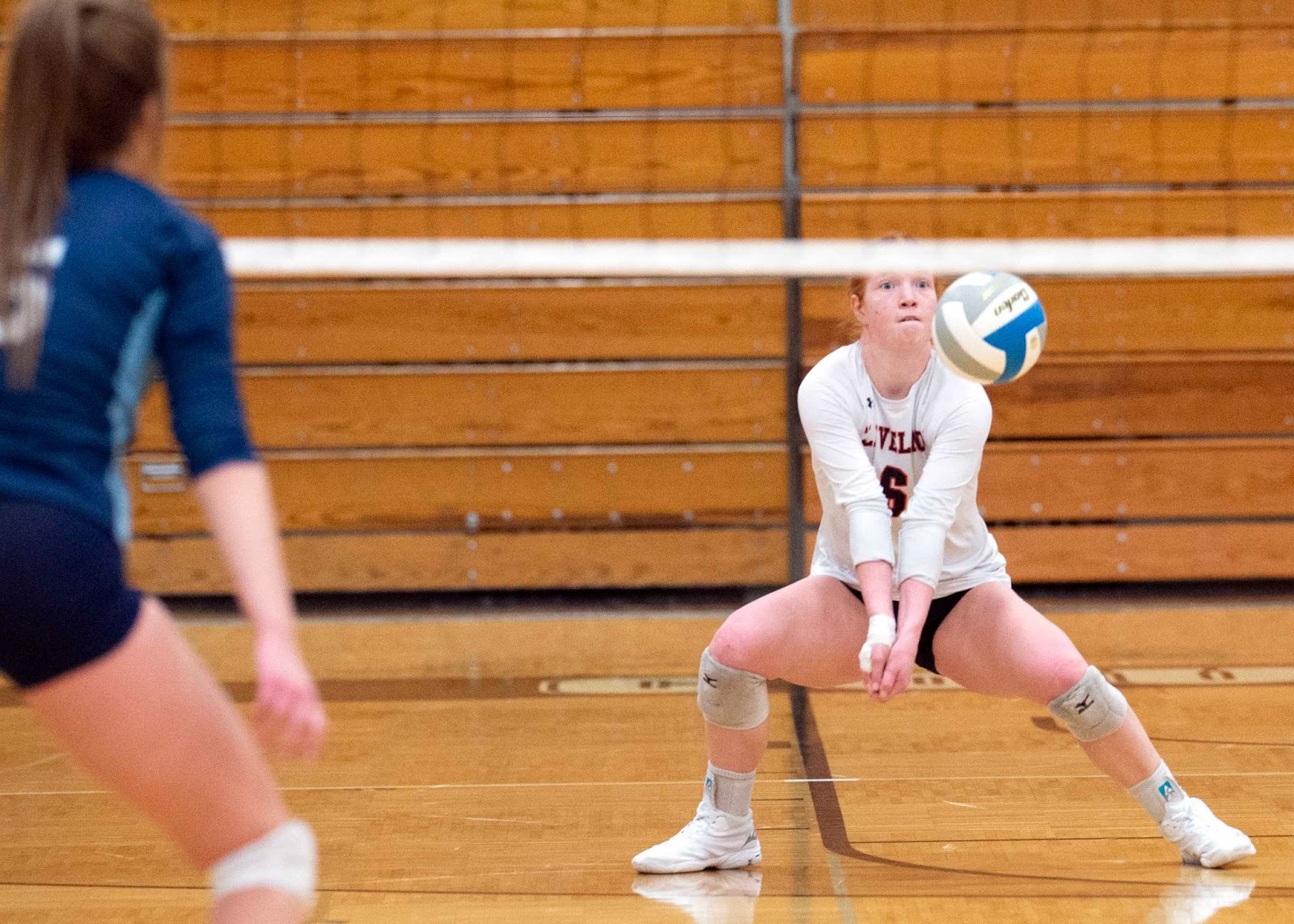 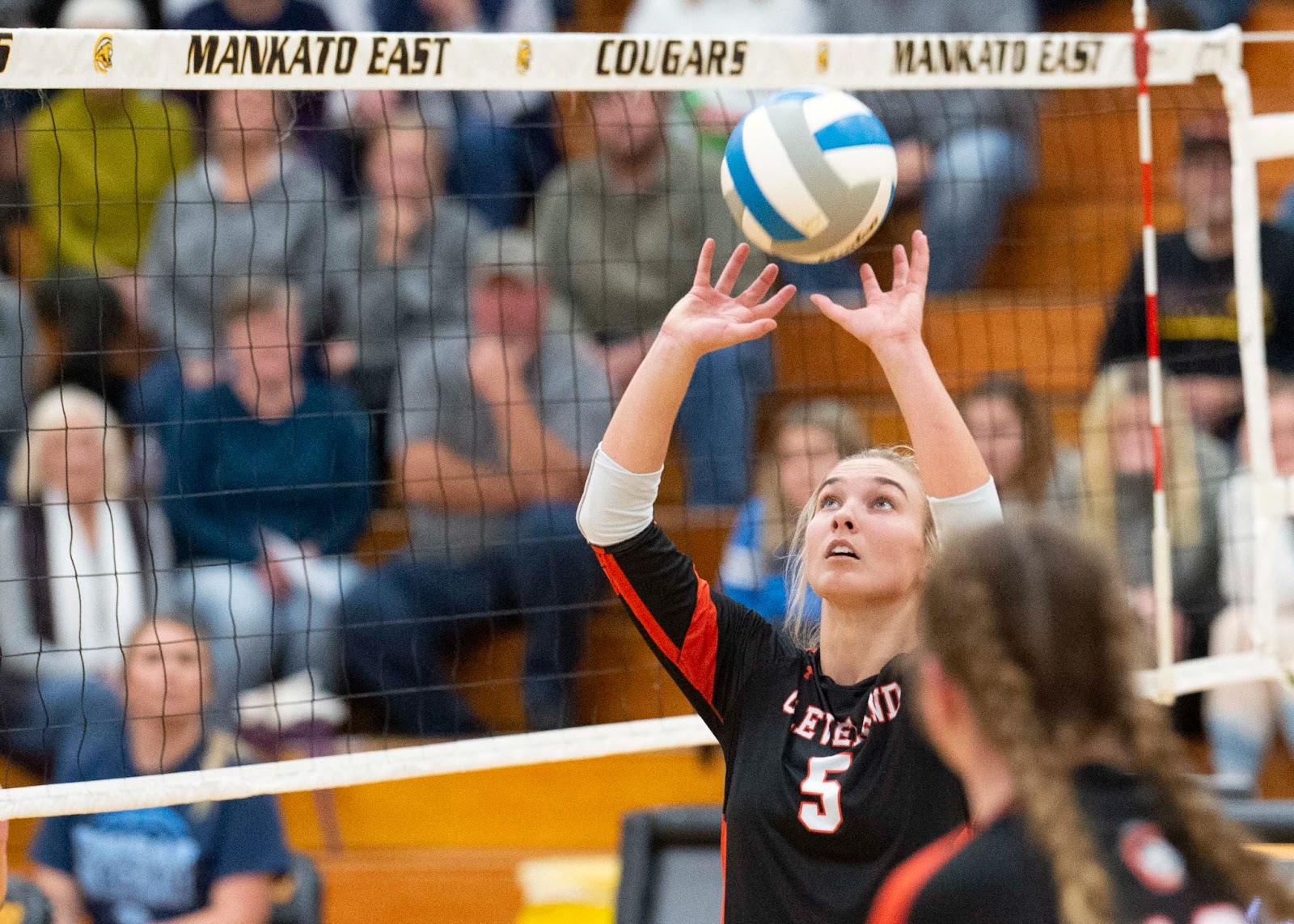 Taylin Gosch sets up the ball late in game three. 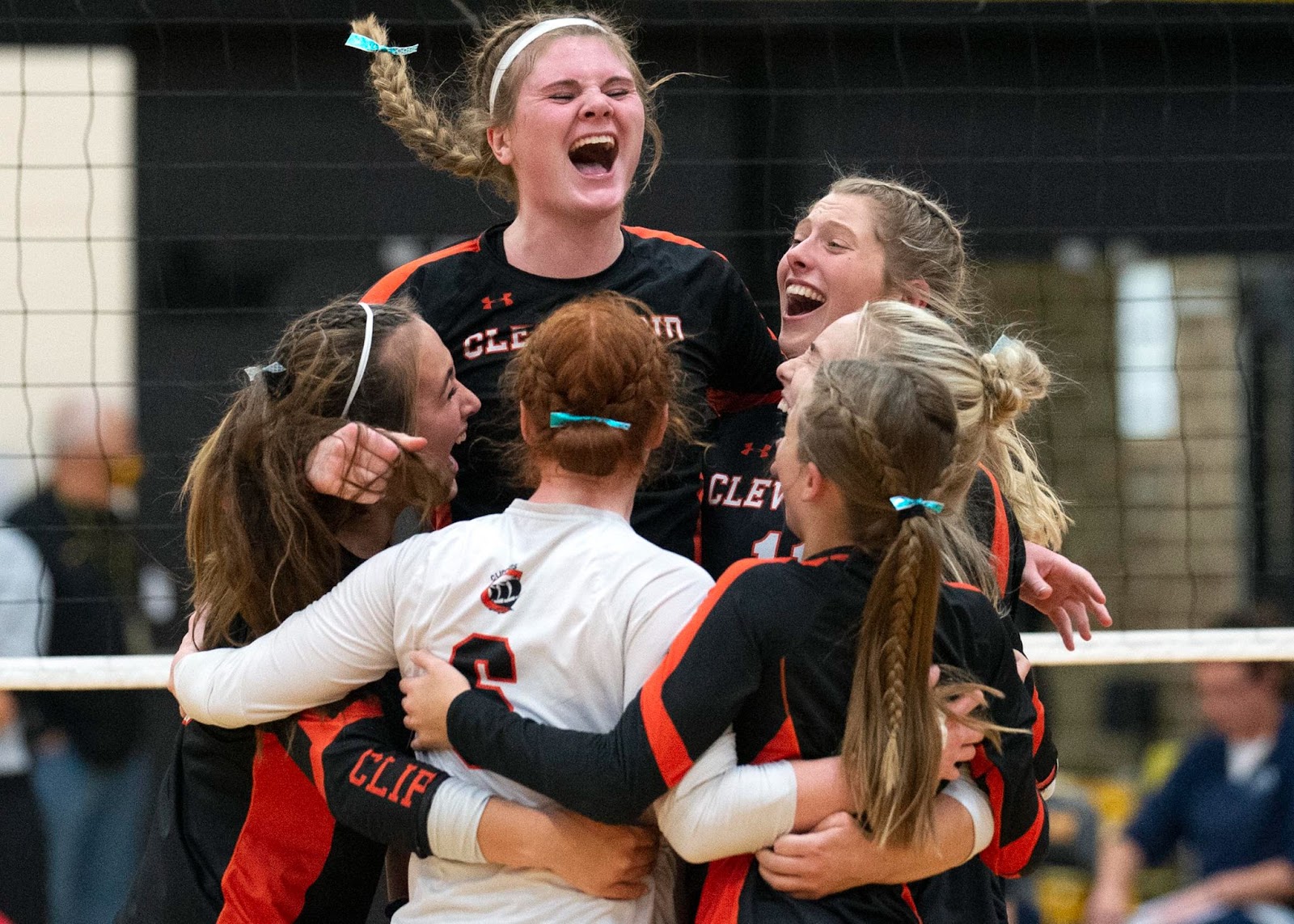 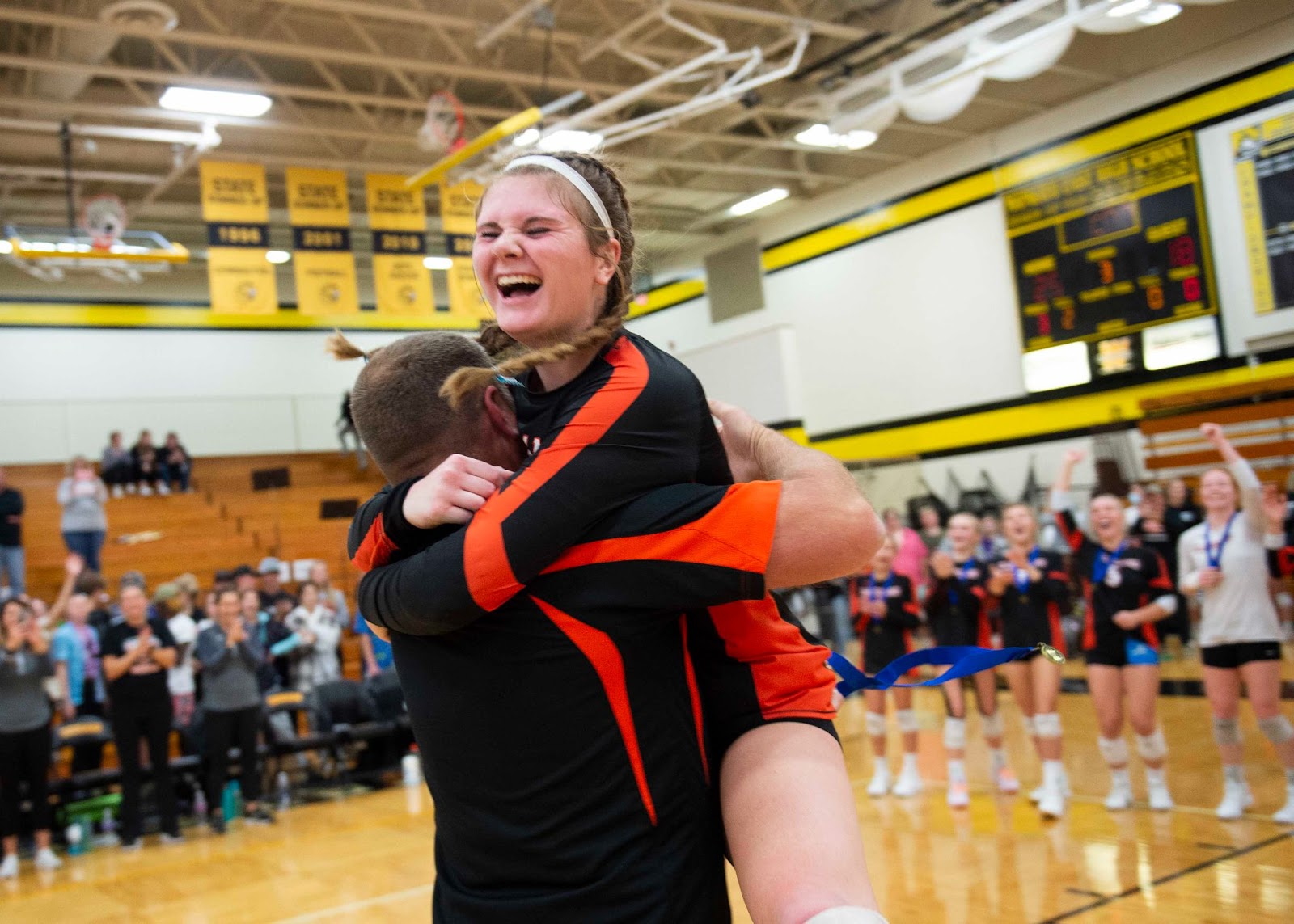 Emily Kern greeted her dad Rich with a bear hug during the medal ceremony. 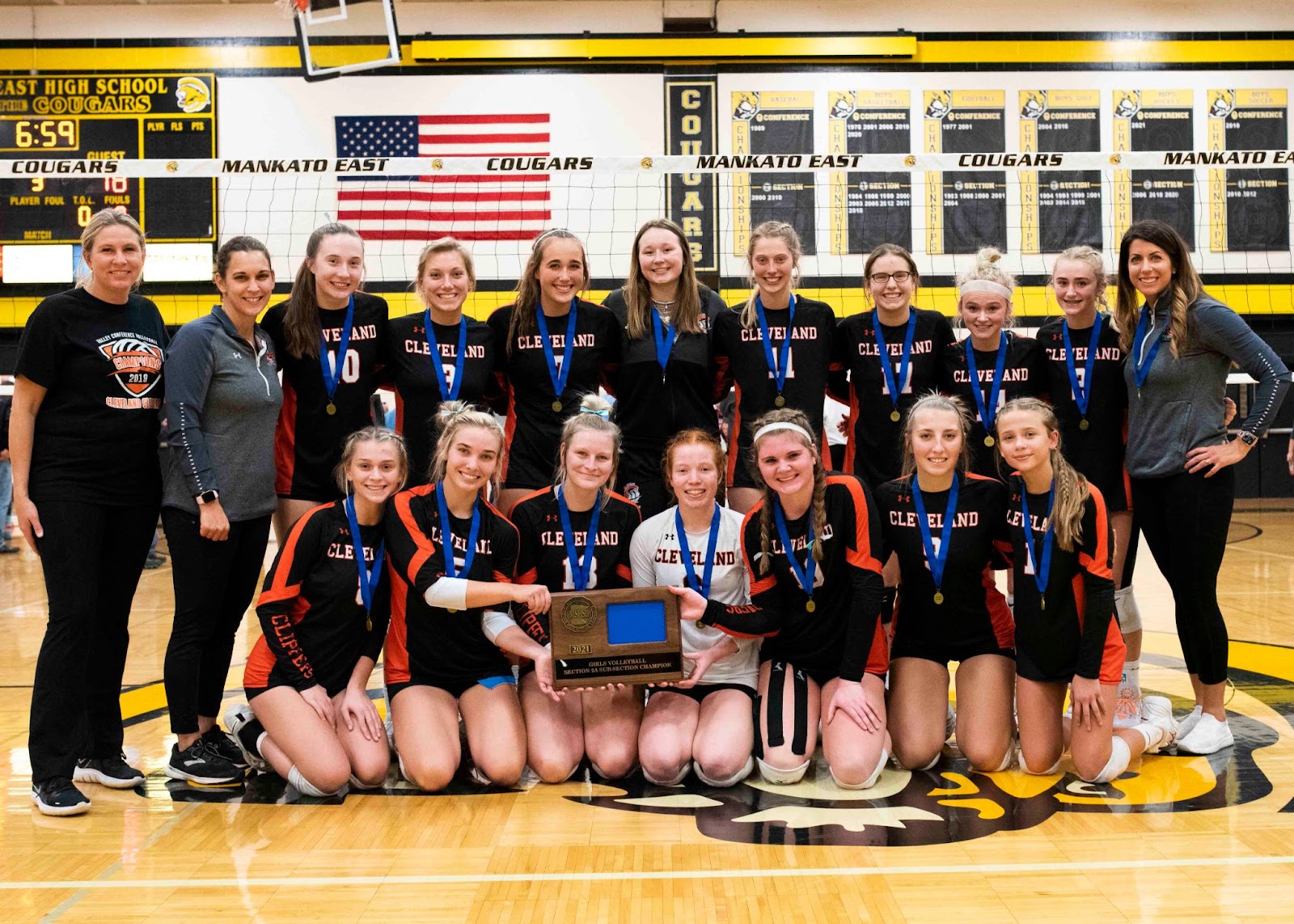 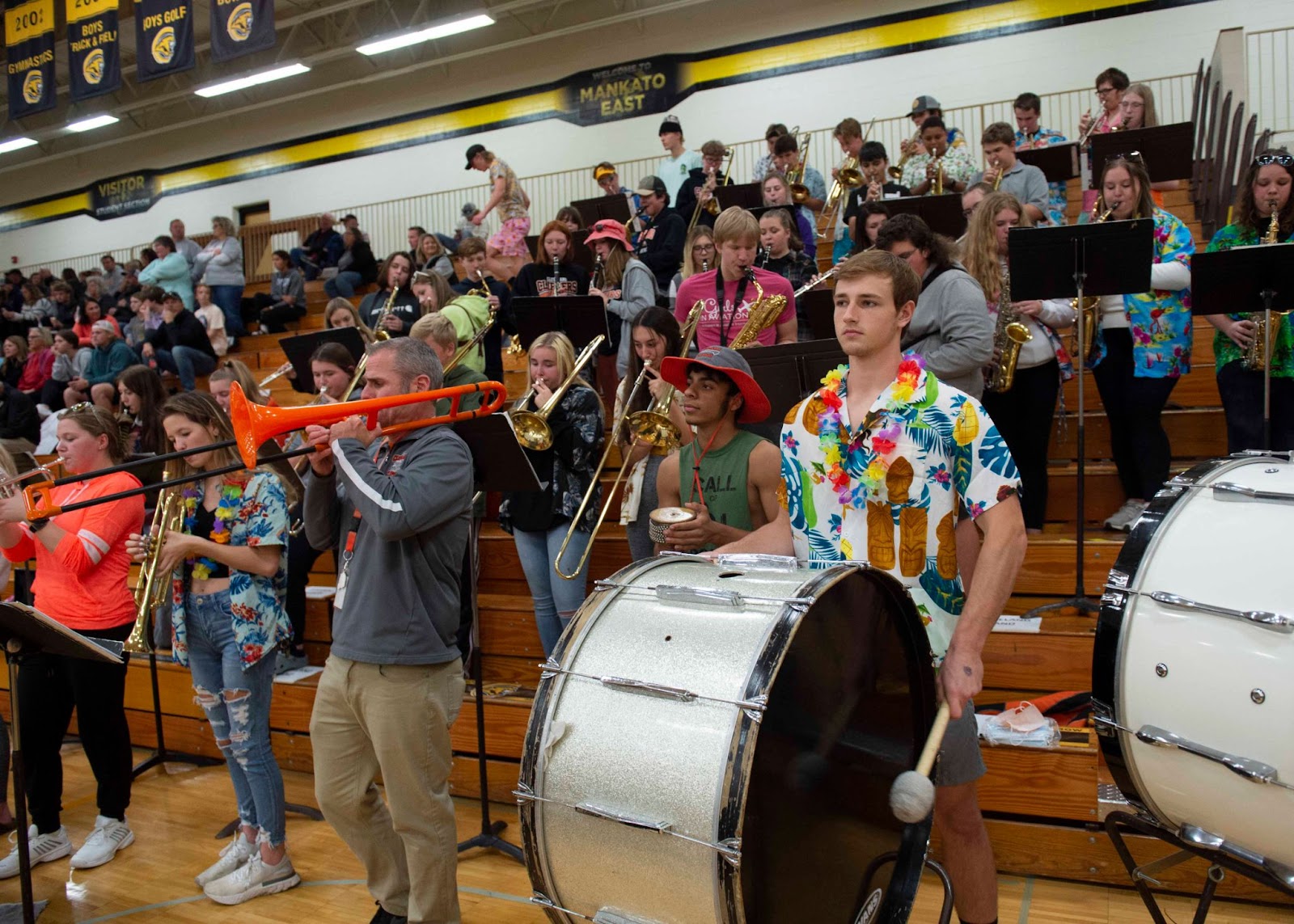 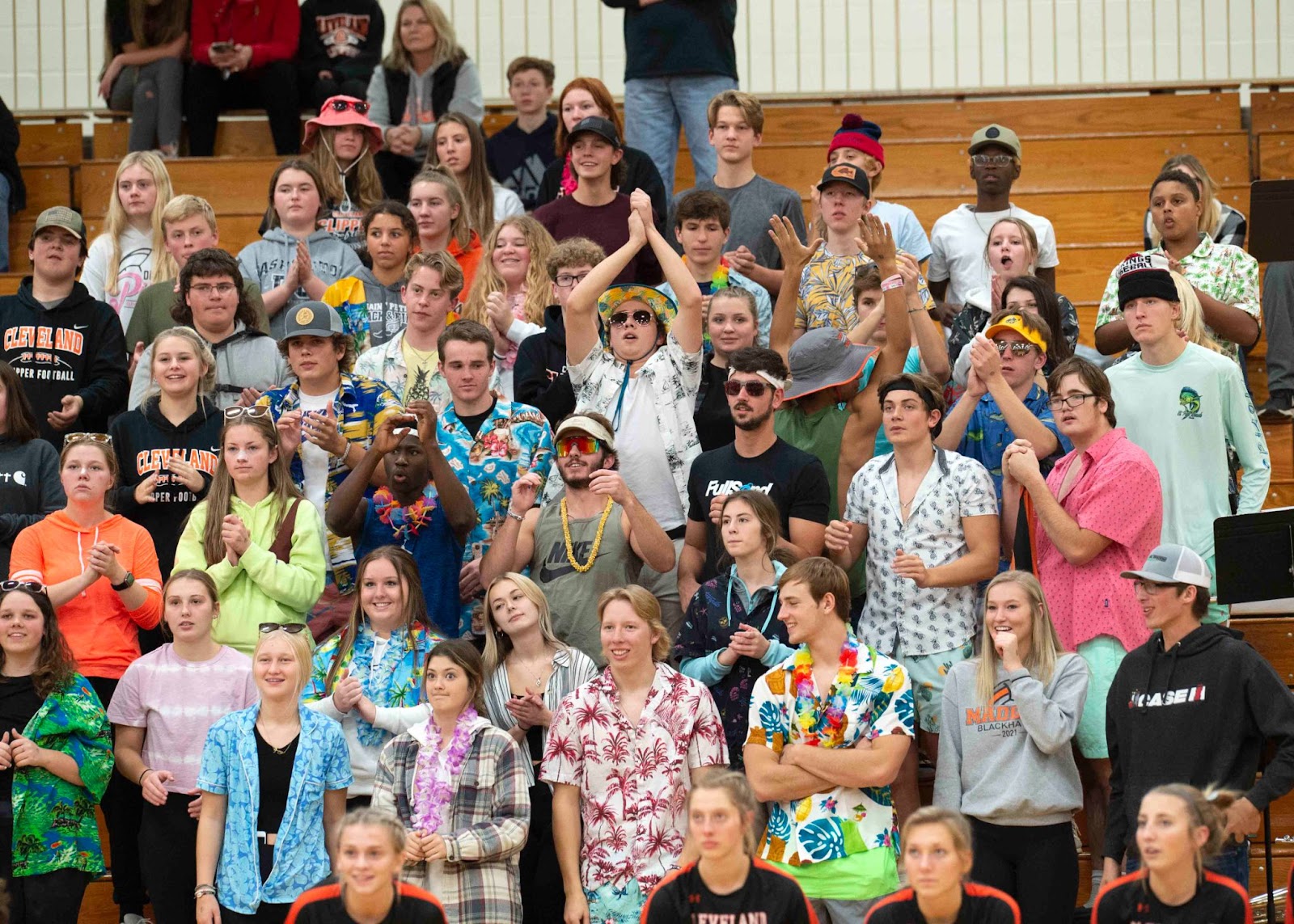 The student section had a tropical flavor.