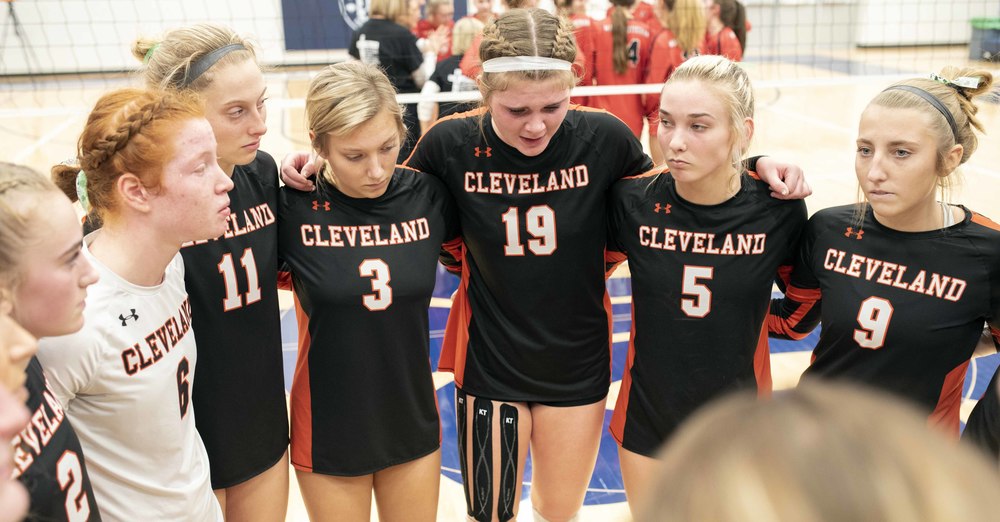 Above: The Clippers huddle one last time after falling to Mayer Lutheran.

It would be easy to say that Cleveland taking on Mayer Lutheran for the Section 2A championship on Friday was like David vs. Goliath.

After all, the Crusaders, with a 28-2 record, have been ranked either first or second in the state. They beat most of the 4A schools they took on this season and 3A and 2A division teams too.

A perennial power, they made it to the state tournament in 2018 and were the section runner up in 2019. Last year, they only lost three sets. Their roster, drawn from around the south-western metro, typically includes a D1 recruit or two.

But despite a 3-0 defeat, the Clippers held their own on the St. Peter court for most of the championship, and the difference in the teams wasn’t as great as it might have seemed on paper.

“We put up a great fight,” said head coach Bree Meyer. “I’m very pleased with how we competed in the first two games, but it is heartbreaking because this Cleveland team is so good, and this is the furthest we’ve ever gone.”

For Emily Kern, the match was also bittersweet. She was sad that she will never wear a Cleveland volleyball uniform again, but like her coach, she was proud of how far the Clippers went in the playoffs.

“We showed up. We all wanted to play and did play,” said the 6-1 middle hitter, who ended the night with eight kills. “The first set was really close, and we didn’t give up the whole time. Even though the score from the last game wasn’t the best, we were trying the whole time.”

“I’d rather play this game than any other game, so it is definitely a victory in my eyes.”

Freshman hitter Ava Hahn opened the match with a kill, but smacking down hits and posting up blocks, 11 of the next 14 points went to the Crusaders.

But the Clippers didn't roll over. Starting with a Kern kill, they spurted for the next five points, which included a Kern service ace and a Laci Hollerich hit that Mayer blocked out of bounds.

From there, the teams traded the next 12 points before the Crusaders went up 20-15 on an ace tip. Down the stretch, Gosch pushed the ball onto vacant real estate for a winner, and Hahn paddled another kill, but the game ended 25-20 when the Clippers stepped under the net.

Game two started with a Greta Hahn ace serve, After a couple of Kern kills and an Ava Hahn kill and serve that rolled over the net and down to the floor, the Clippers were in front 6-3.

Kern sent over a winner from the back row to put the Clippers in front 12-8. Despite a series of rapid-fire digs by junior libero Emma Sweere, the Crusaders went on a power trip after that for an 8-point run and a lead they would never relinquish. The game ended 25-17 on an ace block.

The Crusaders got up 3-0 in game three and never let up on the throttle. With all six Cleveland seniors on the floor: Kern, Gosch, Grayce Kortuem, Jordyn Klingel, Maddy Steen and Allison Jindra, the game ended 25-9 on a kill.

Gosch tossed 15 assists and also had one block, one kill and five digs. Sweere scraped up 10 digs, passed for one assist and had one kill. Greta Hahn and Savannah Meyer each had one kill. Harley Connor had one dig.

While they didn’t serve a ton, the Clippers only missed twice.

The Clippers return a strong group in 2022.

Ava Hahn was second only to Kern in kills this season, and Meyer expects her to lead the attack force. Her sister Greta will switch from back row to setter. Hollerich will continue on the outside, and Connor will staff the right side. Lexi Waldron and Serena Remiger will take turns in the middle, while Meyer and Sweere will staff the back row.

Especially since they were in her son’s class, Meyer will really feel the absence of the six seniors next fall.

“I’m going to miss seeing them after school and at practice or riding the bus.”

Gosch felt the same way about her teammates.

“I’ll never forget the bonds I made with the younger girls, especially with Savannah (Meyer). I think having that friendship out on the court really helps out the team.”

The Clippers finish their season with a 22-9 record. 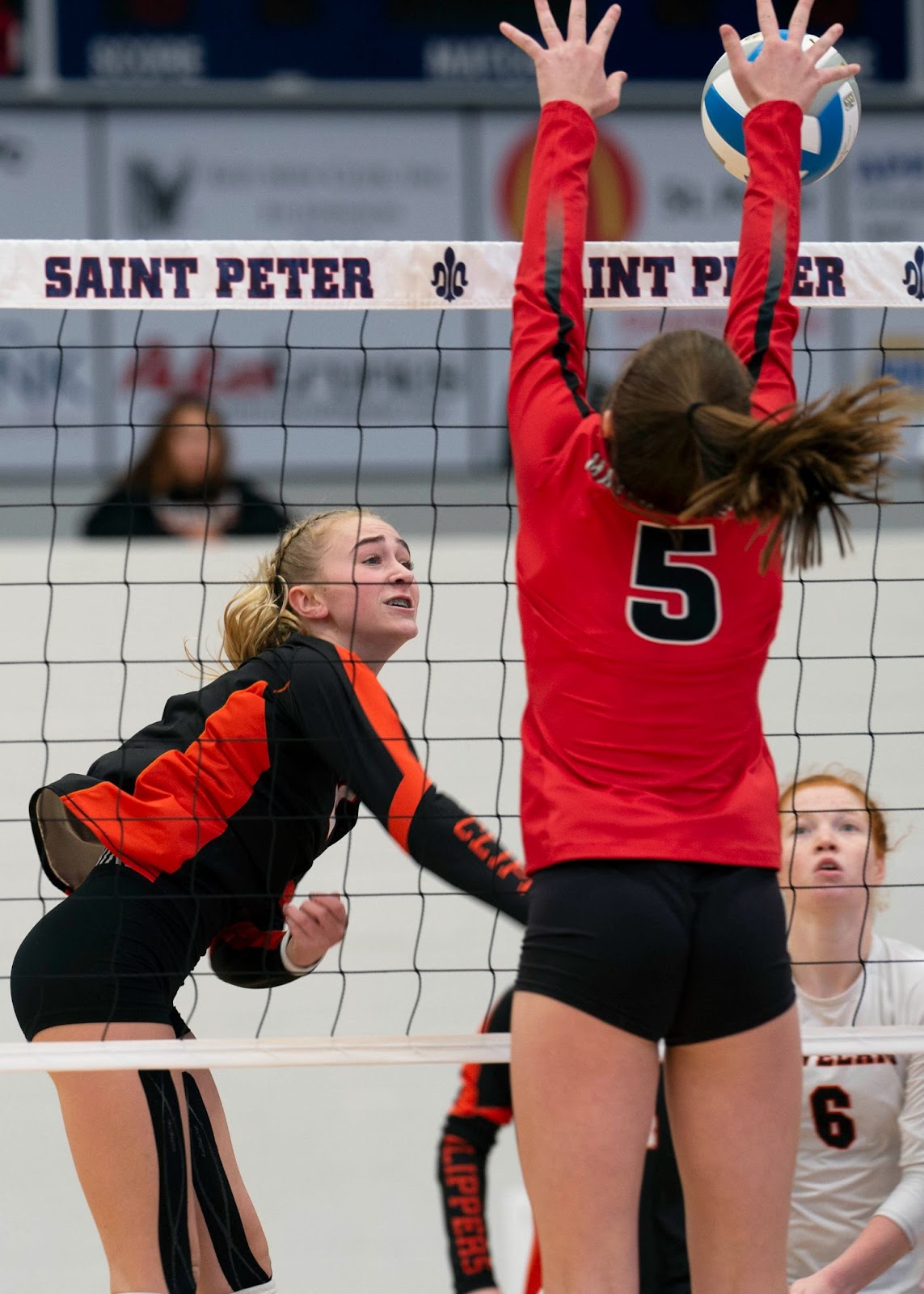 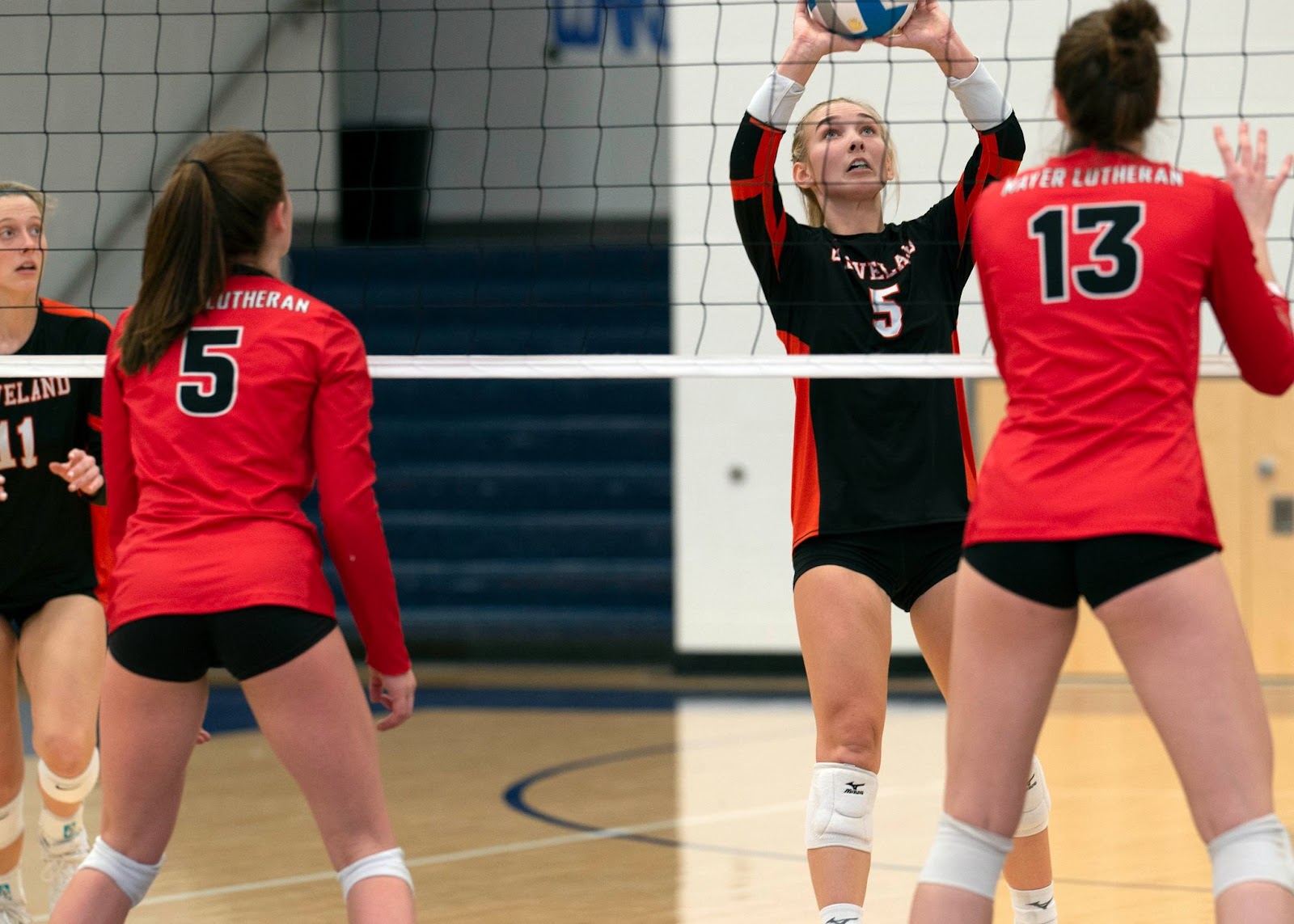 Taylin Gosch pushes the ball skyward for a set. 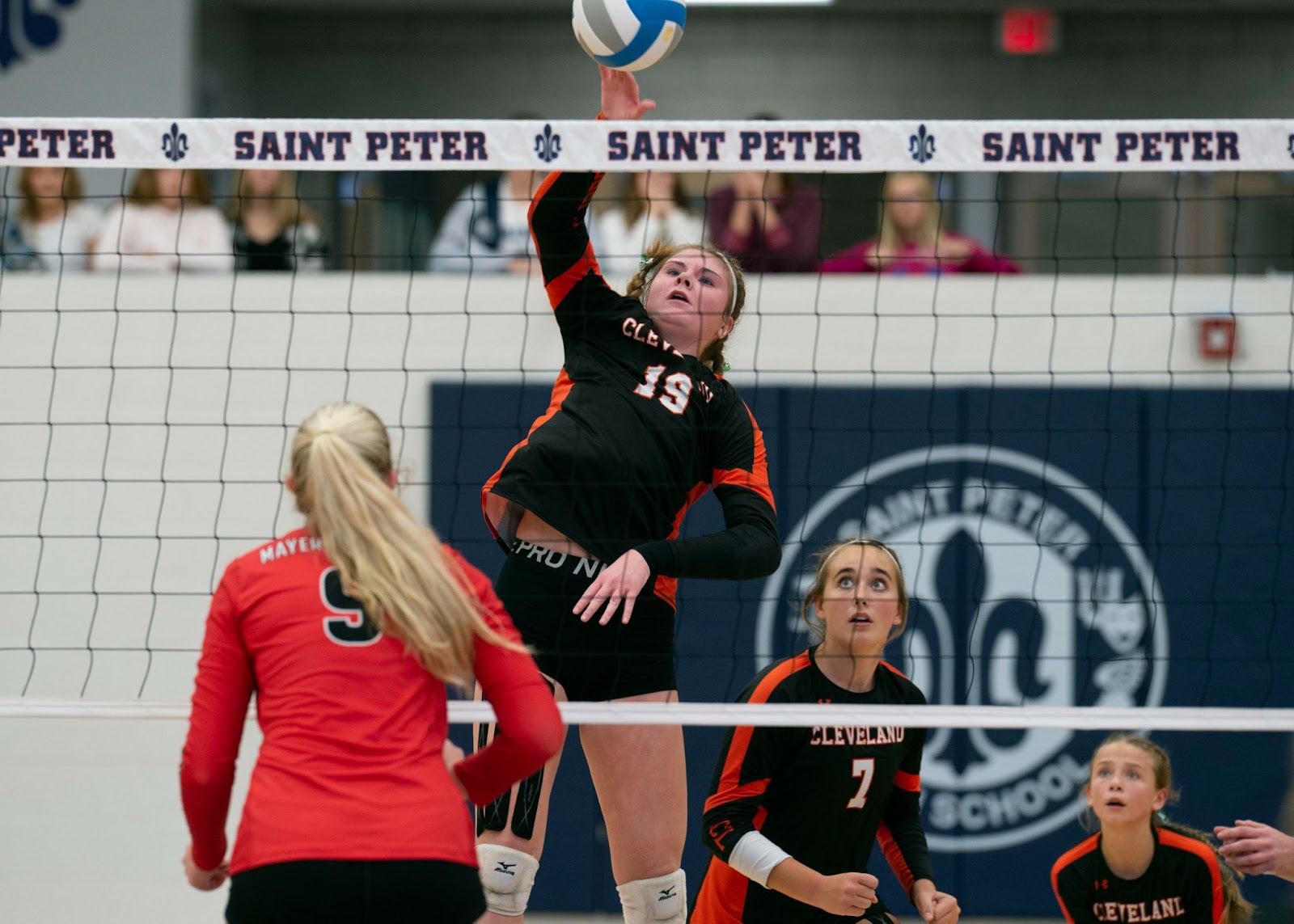 Emily Kern swings through a hit. 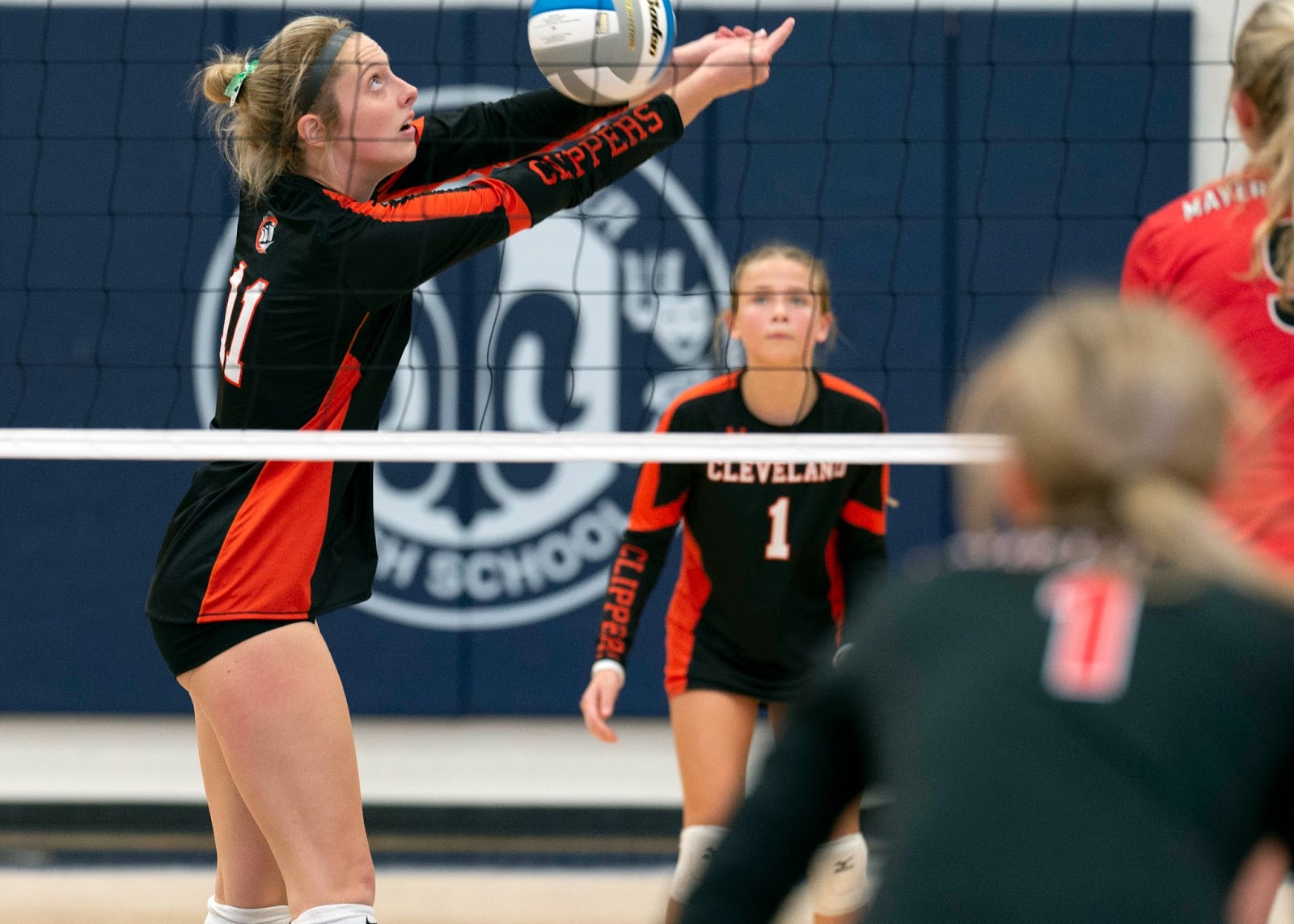 Harley Connor pushes up a bump. 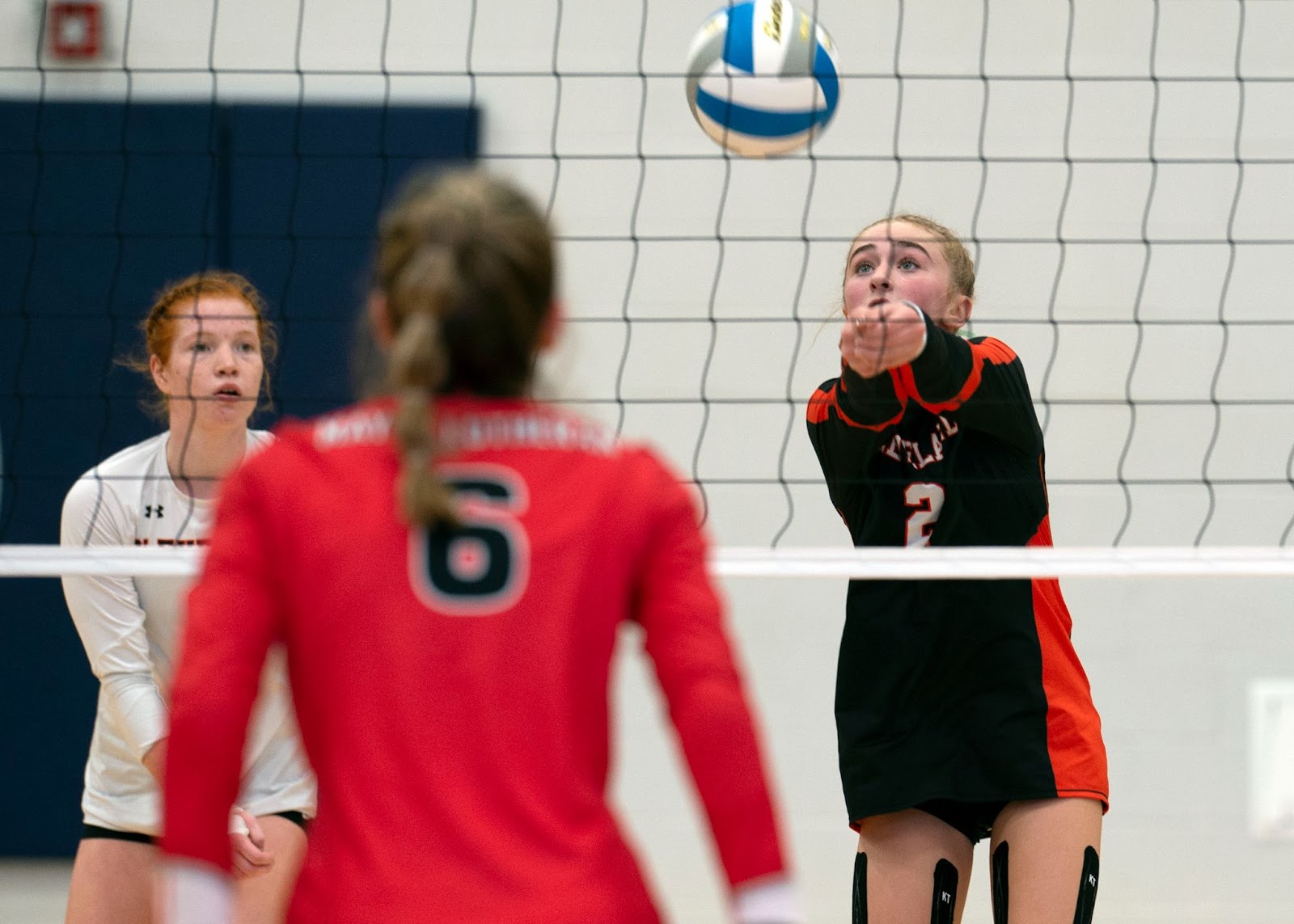 Ava Hahn claps her hands for a set. 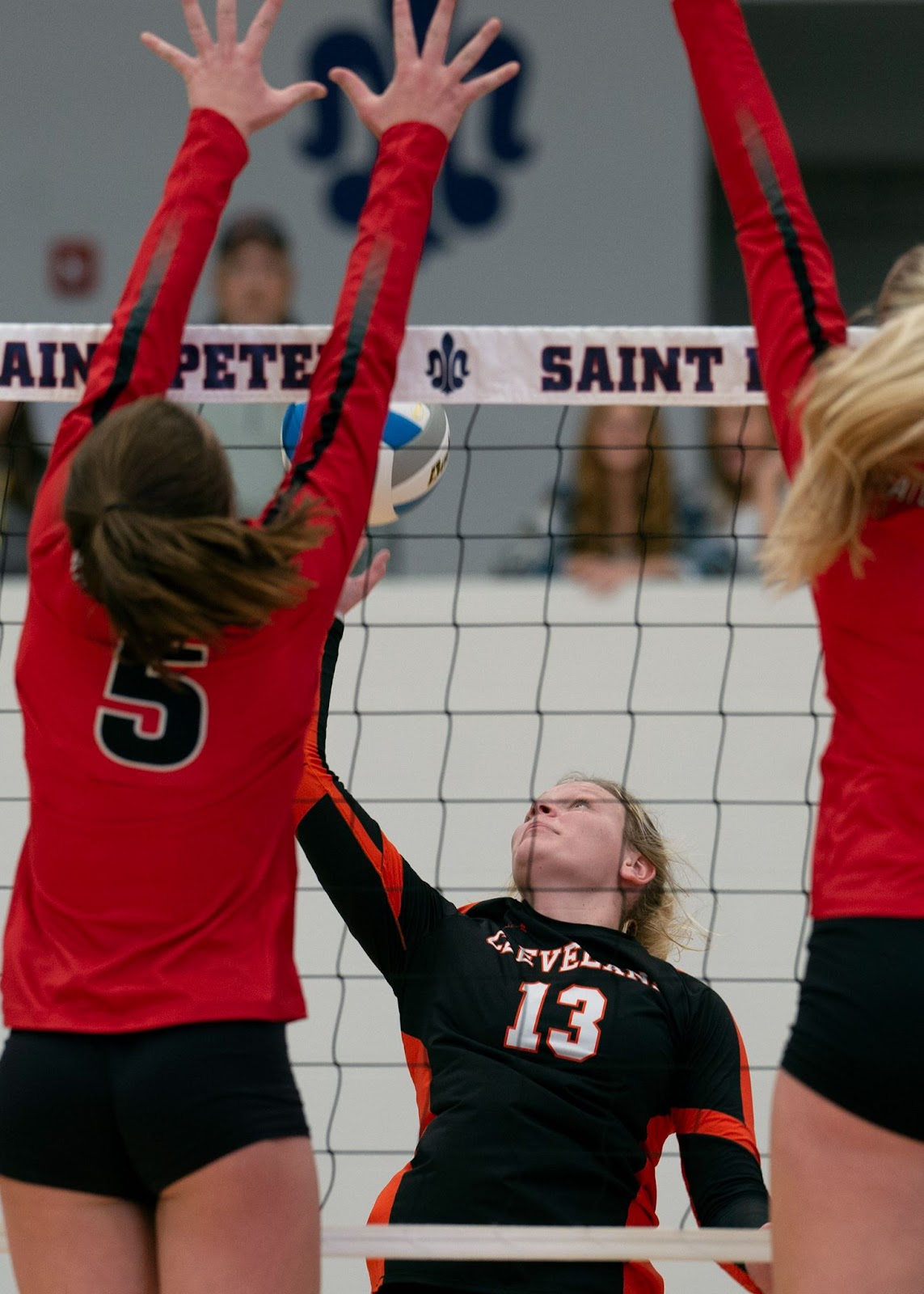 Grayce Kortuem pushes the ball over the net. 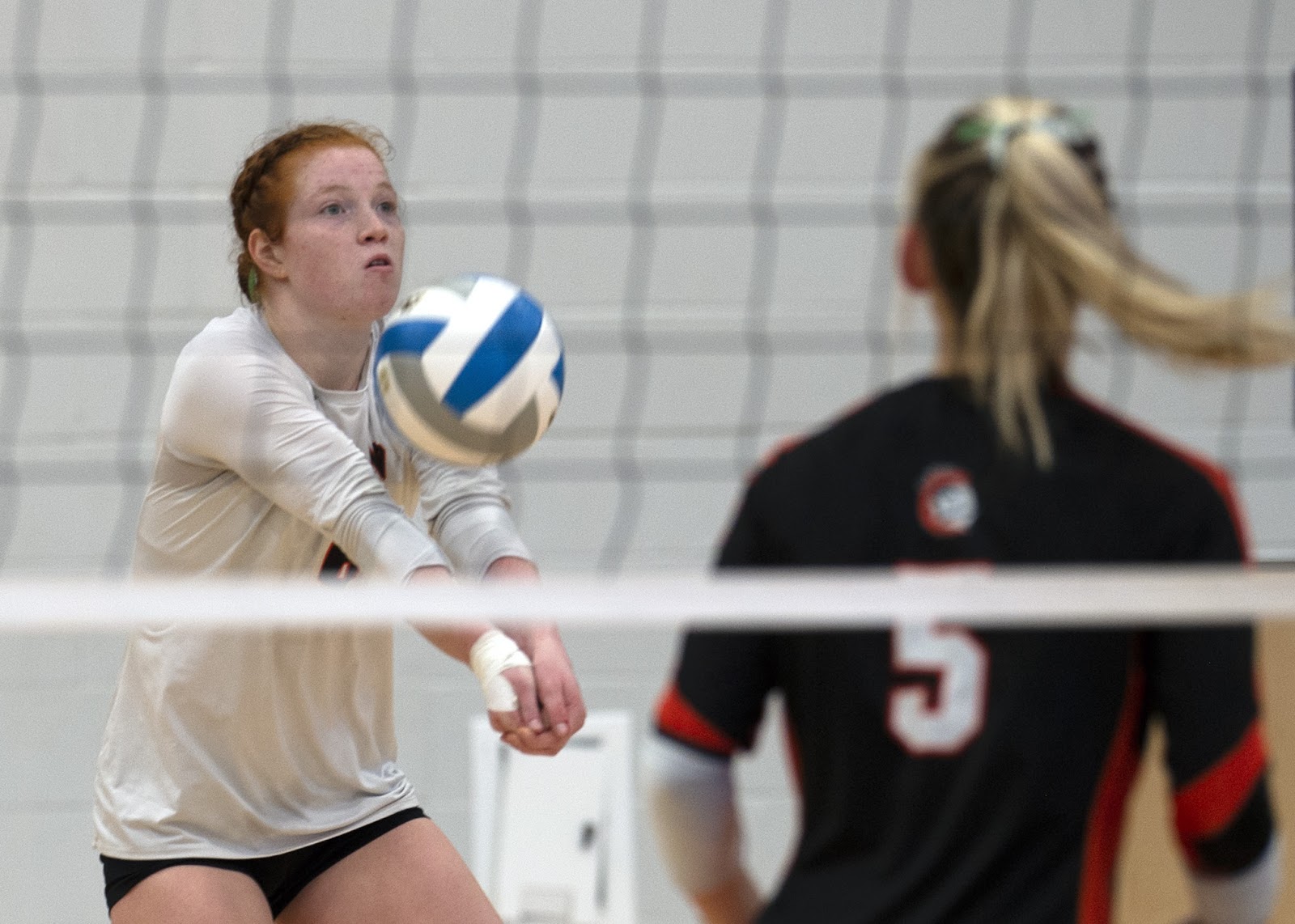 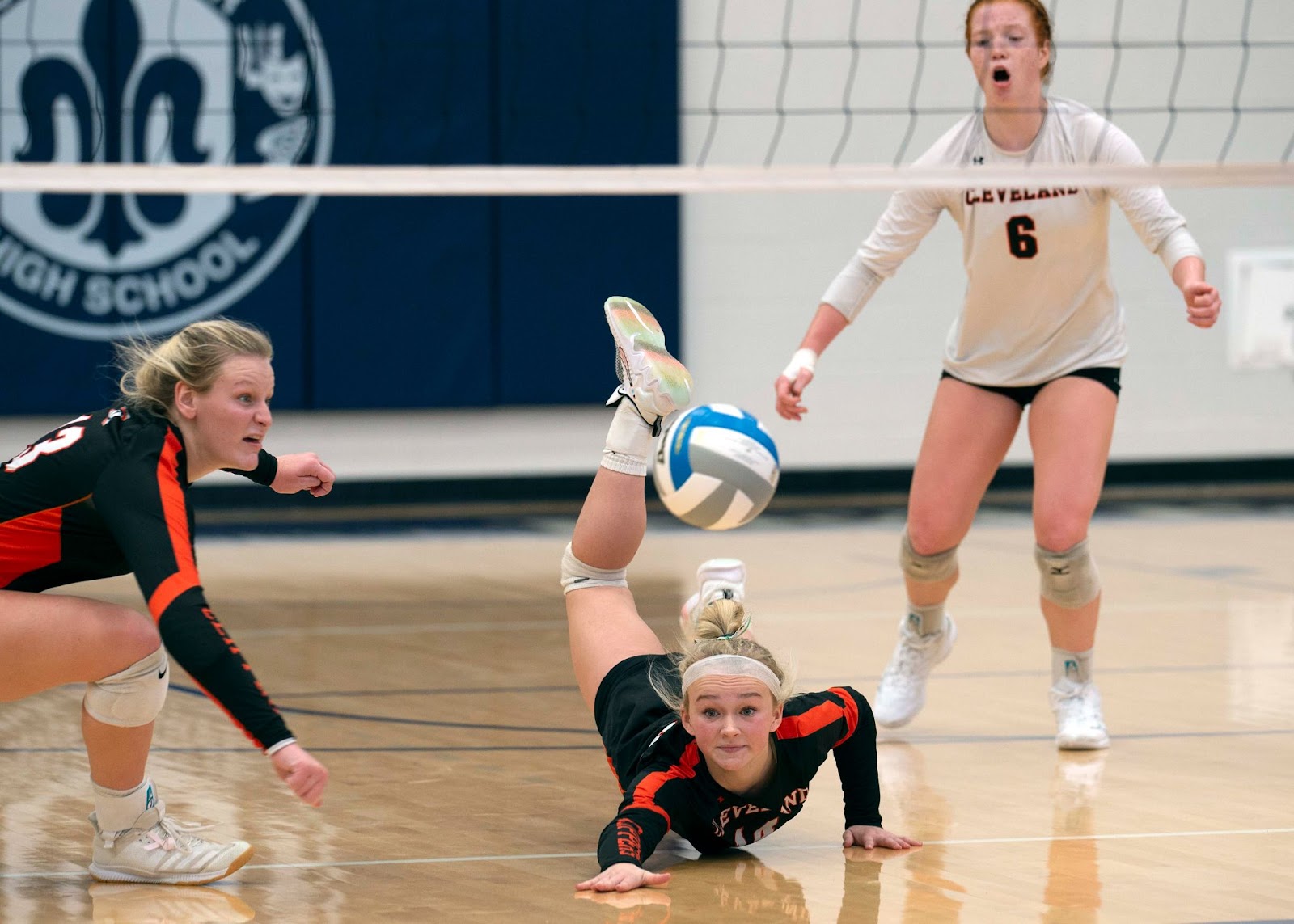 Greta Hahn dives for the ball. 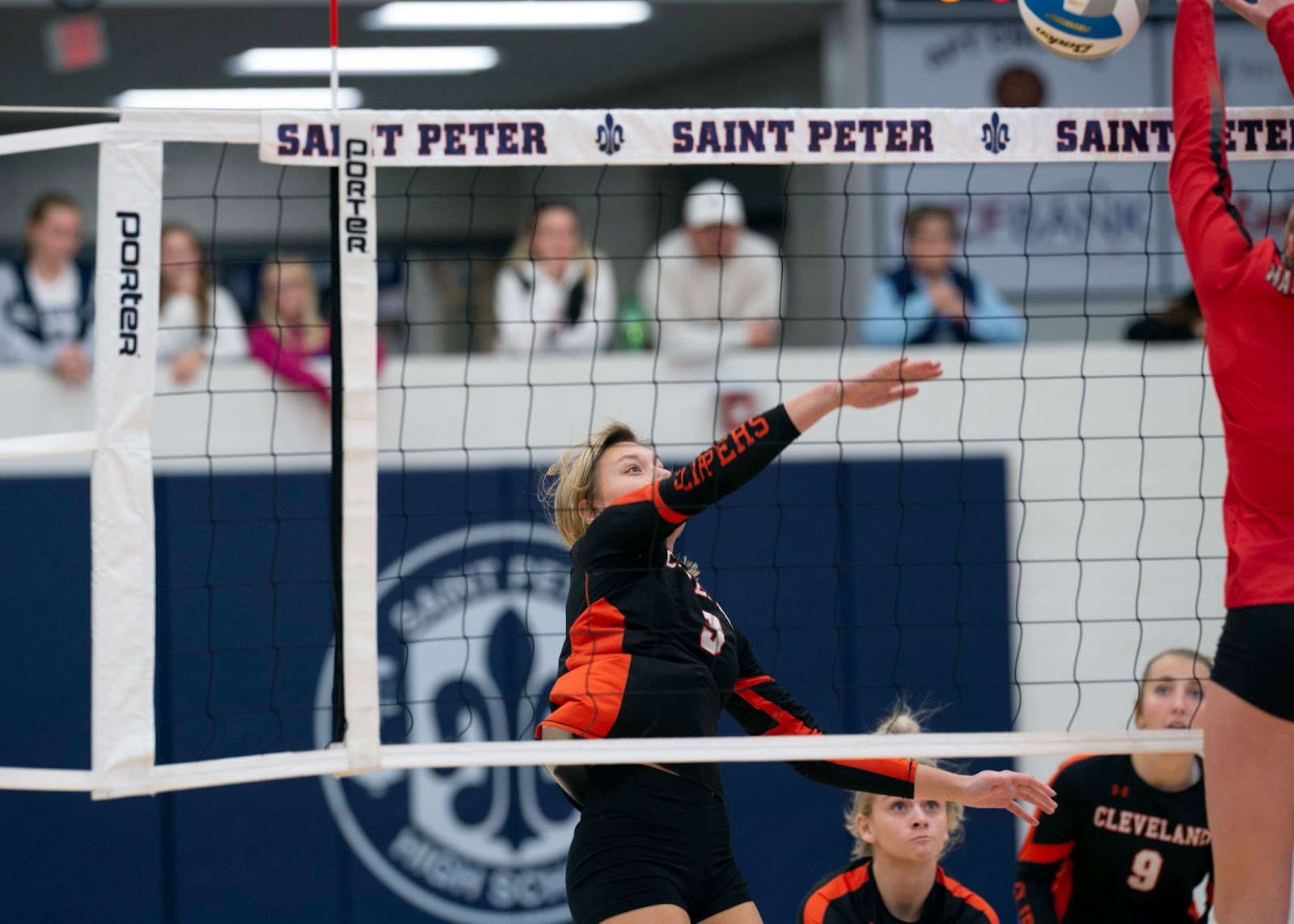 Senior Maddy Steen goes up for a hit. In the background are classmates Jordyn Klingel and Allison Jindra. 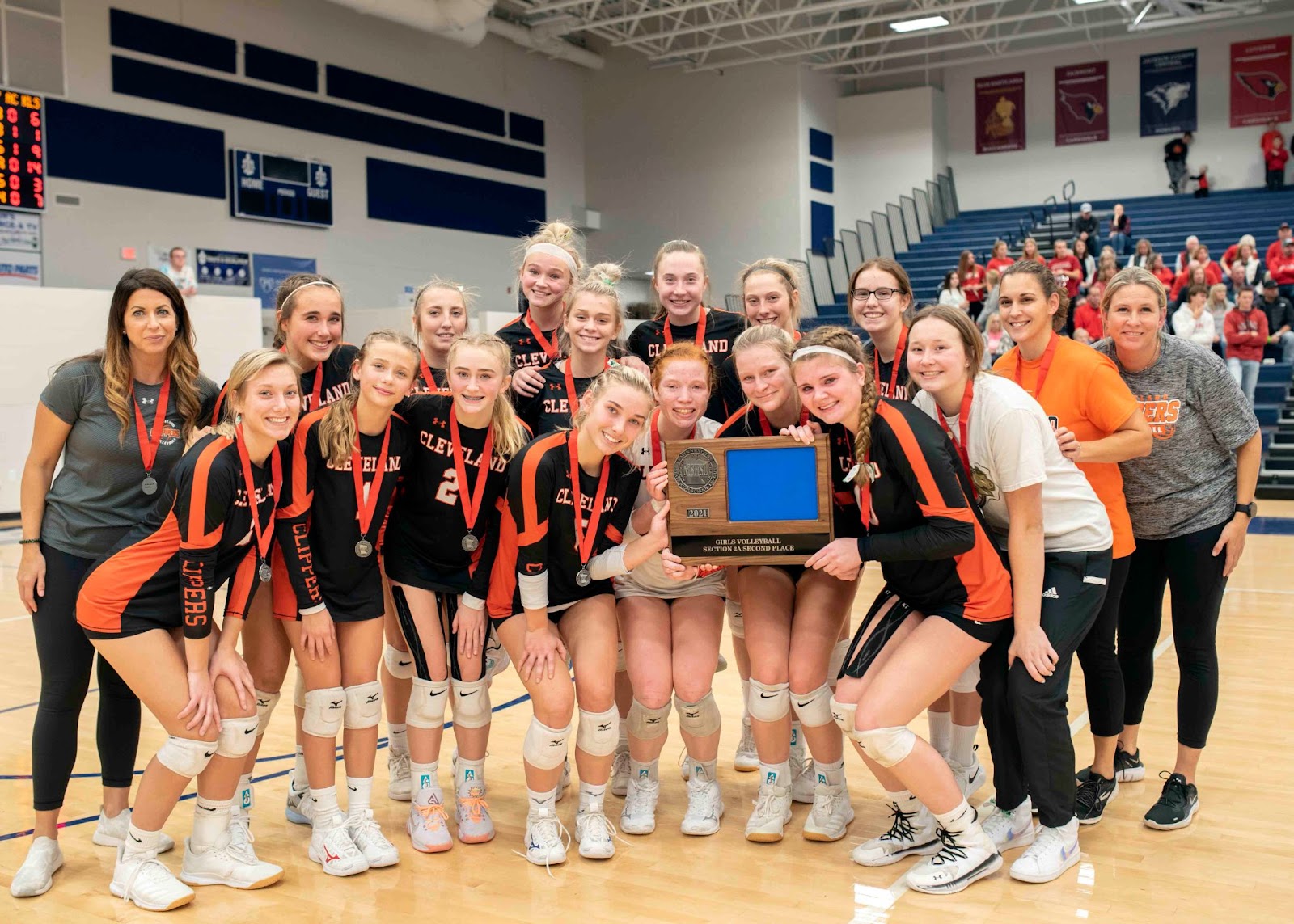 The Clippers hold up their runner-up trophy 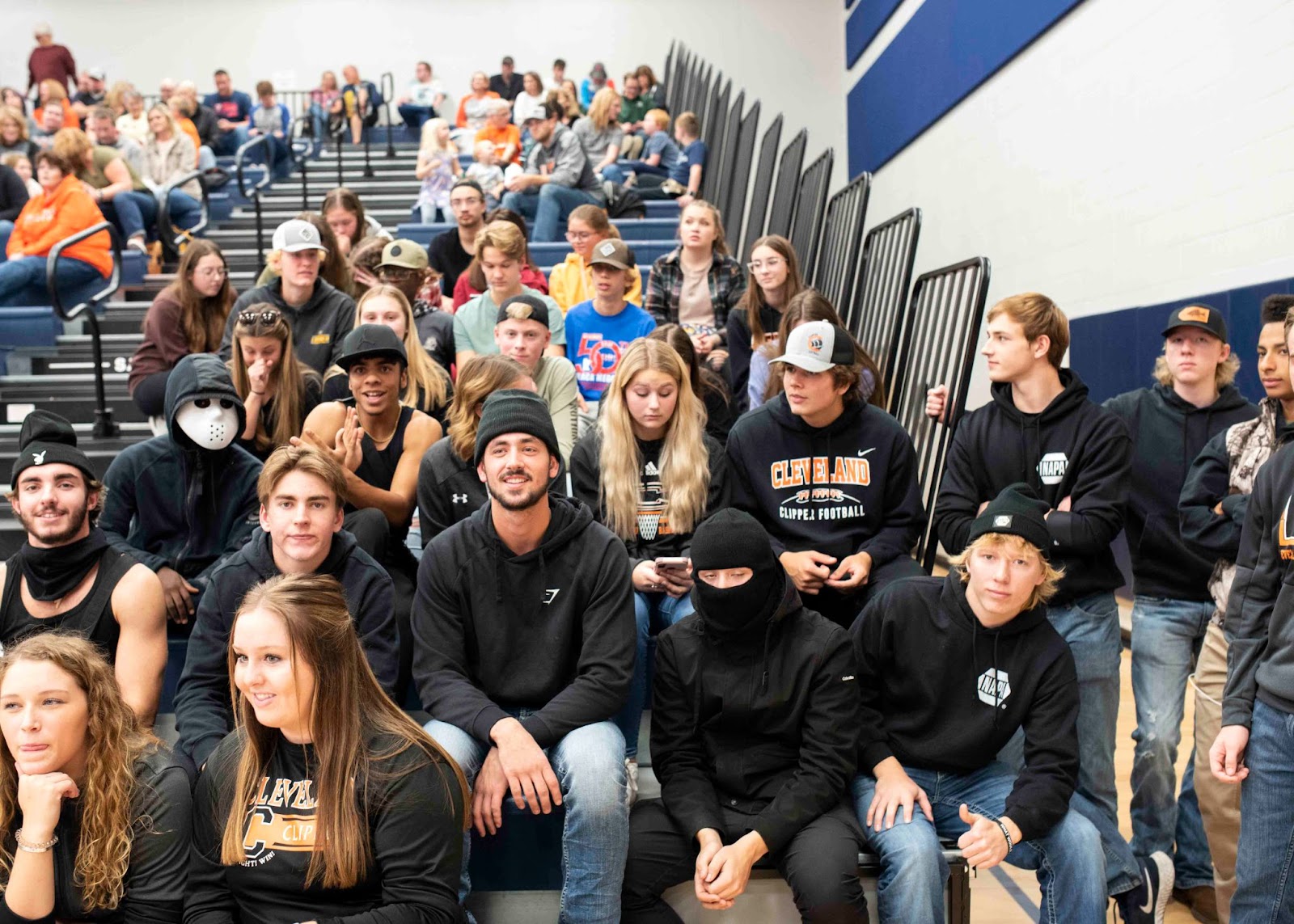 It was “Heist Night” in the student section. They were hoping the Clippers could steal a victory over Mayer Lutheran.