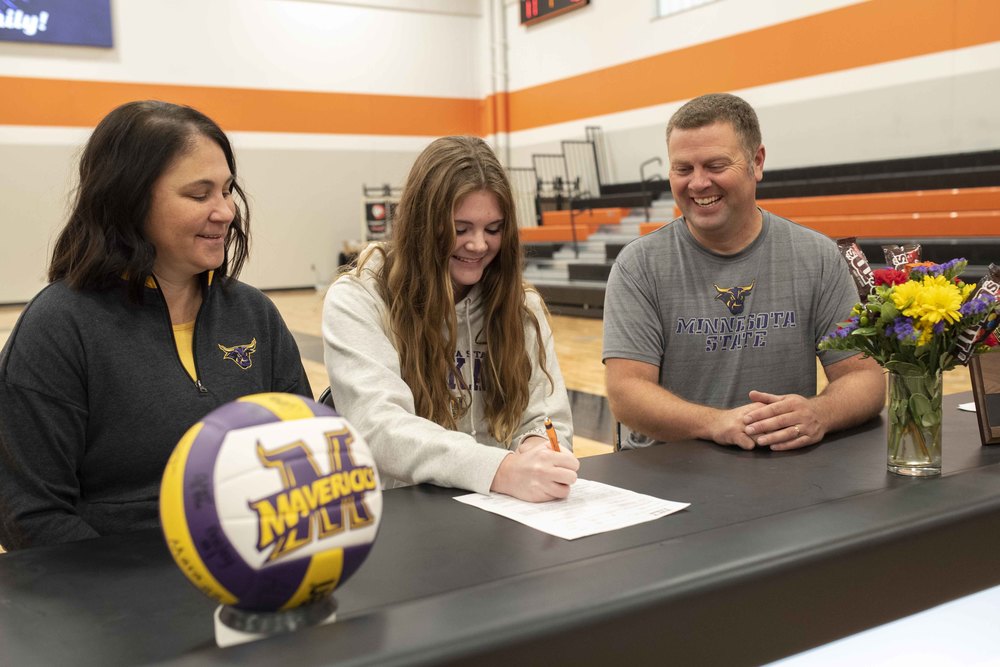 Above: Flanked by her mom Becky and her dad Rich, Emily Kern signs a National Letter of Intent to play volleyball at Minnesota State University, Mankato.

While Emily Kern competed in her final volleyball game as a Clipper last Friday, it was not the end of a career for the 6-1 middle hitter.

She will become one of only a handful of Clipper athletes to  compete at a Division II level.

“Years of hard work have led to this moment today,” said high school counselor Megan Peterson, who presided over the signing. “However nothing is official until you sign the National Letter of Intent. Through all of her hard work, dedication and commitment over the years here at CHS, Emily Kern earned a scholarship to attend Minnesota State University, Mankato, home of the Mavericks.”

“I had Emily as a sixth-grade student, and I saw her aggressiveness when I subbed for phy ed and watched her play dodge ball against the boys,” said Cleveland volleyball coach Bree Meyer, who took the podium during the ceremony. “Seeing her for tryouts her 10th-grade year, I told my assistant that Emily was going to be a college athlete. She had the height and the quickness and the drive. She is coachable and has been a captain for two years and a leader on and off the court.”

Kern began to consider MSU,M as a sophomore.

“We went to a game, and the coach had already heard my name, and we went and talked to him, and then my junior year he saw my film, and he asked my parents and me if we wanted to make a visit there to see the team and the school.”

A week later, she returned to the campus, and the coach offered her a scholarship. She verbally committed a few days later.

“The campus is really nice. When I met the team, everyone was really friendly. I watched their practice, and there was a lot of positive energy, and the coach is really nice too, and I know I’m going to work well with him and all the girls. It was just a really good environment.”

Kern also likes that the school is nearby.

“My parents and grandparents and all my family and friends can come.”

“I’m excited,” said dad Rich Kern, athletic director at Cleveland school. “It’s close by so that makes it easier to come and watch her.”

Kern has been a part of the Cleveland public school system since preschool. She first competed in volleyball as a third grader. She started as a C-squad player as an eighth grader and leapfrogged to varsity as a freshman. She was on the 2019 conference champion team and led her team to the section championship this year.

“I know the numbers would be higher if we didn’t have a Covid year last year,” Meyer said.

Not every school uses the NLI, but about 650 NCAA DI and DII schools do. It’s not mandatory to sign, but every year more than 48,000 student-athletes commit via an NLI. The National Letter of Intent is not affiliated directly with the NCAA; it was created by the Collegiate Commissioners Association to protect both the college and student from either party backing out.

A three-sport athlete, Kern will be a part of the Cleveland basketball and softball team before she heads off to Mankato next summer. 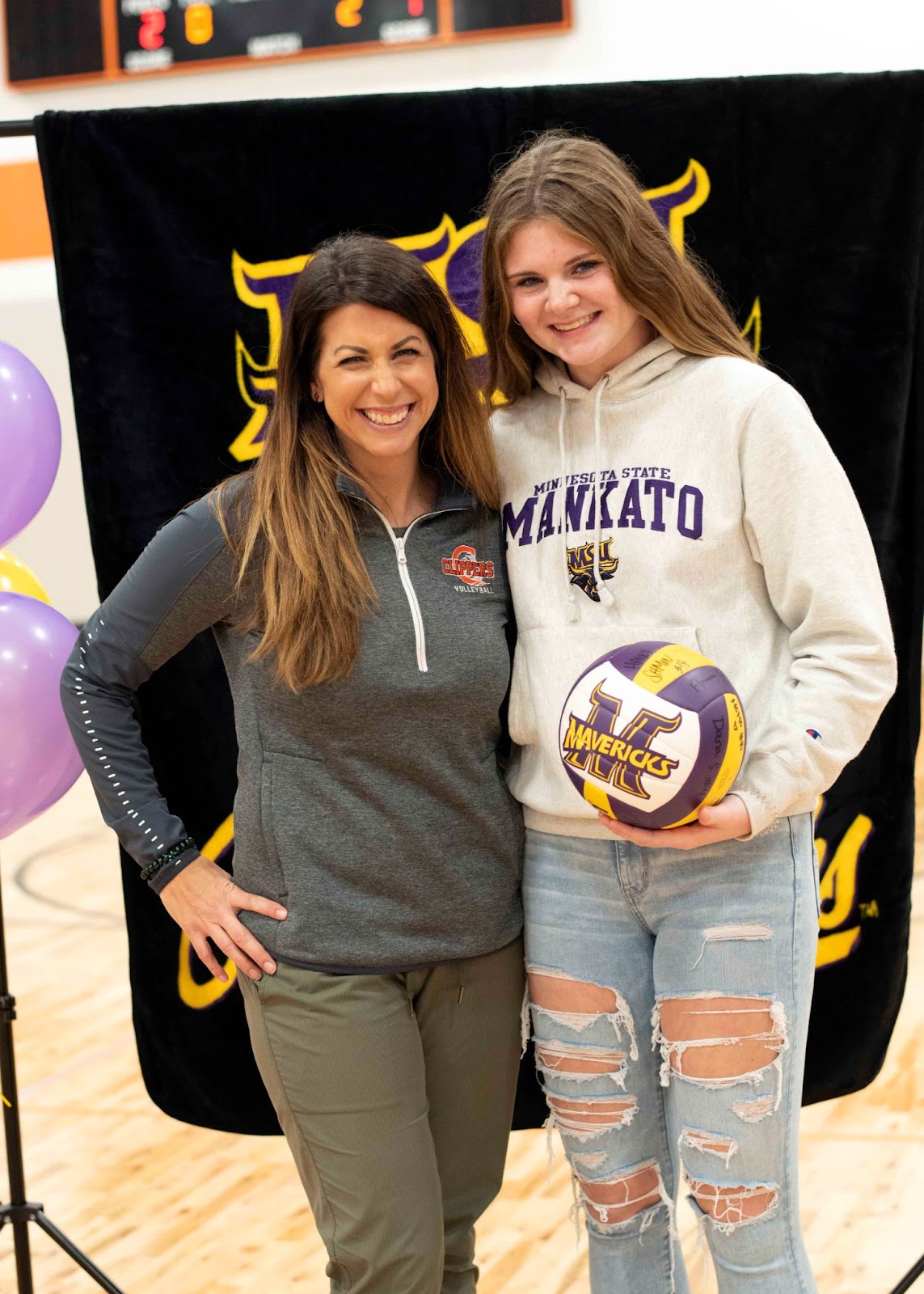 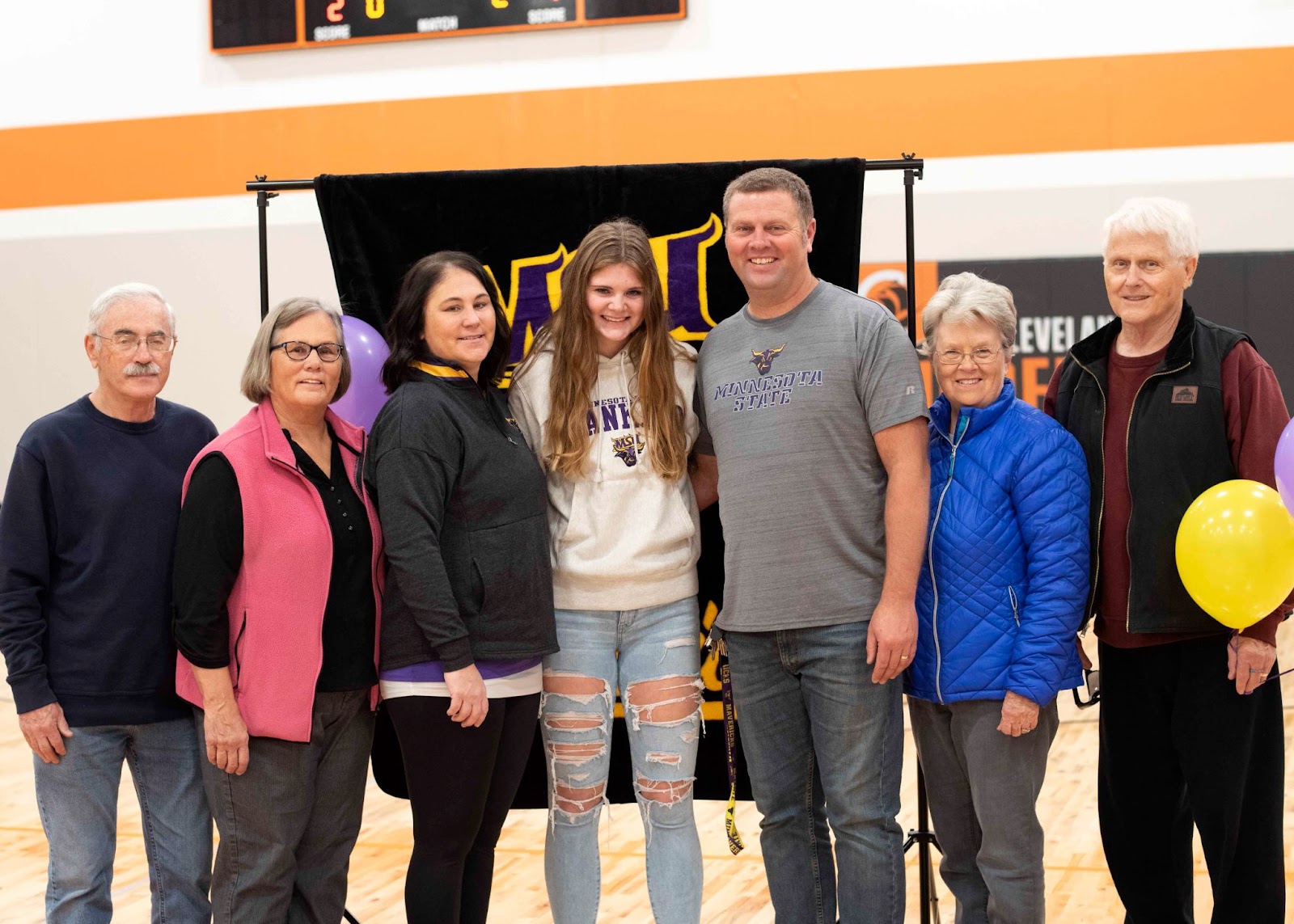 Emily Kern (center) comes from an athletic-oriented family. Grandfather Glen O’Connor (left) coached several sports at CHS and served as athletic director. Her grandfather Richard Kern (right) competed in five sports at Montevideo High School and, as a football player at Mankato State College (now MSU,M), was a three-time All-Conference award winner. He went on to coach several sports at St. Peter High School. Her father Rich (third from right) and mother Becky (third from left), were three-sport high school athletes. Rich Kern is the current AD at CHS and also coaches. Also shown are her grandmother Sandy O’Connor (second from left) and her grandmother Bonnie Kern (second from right). 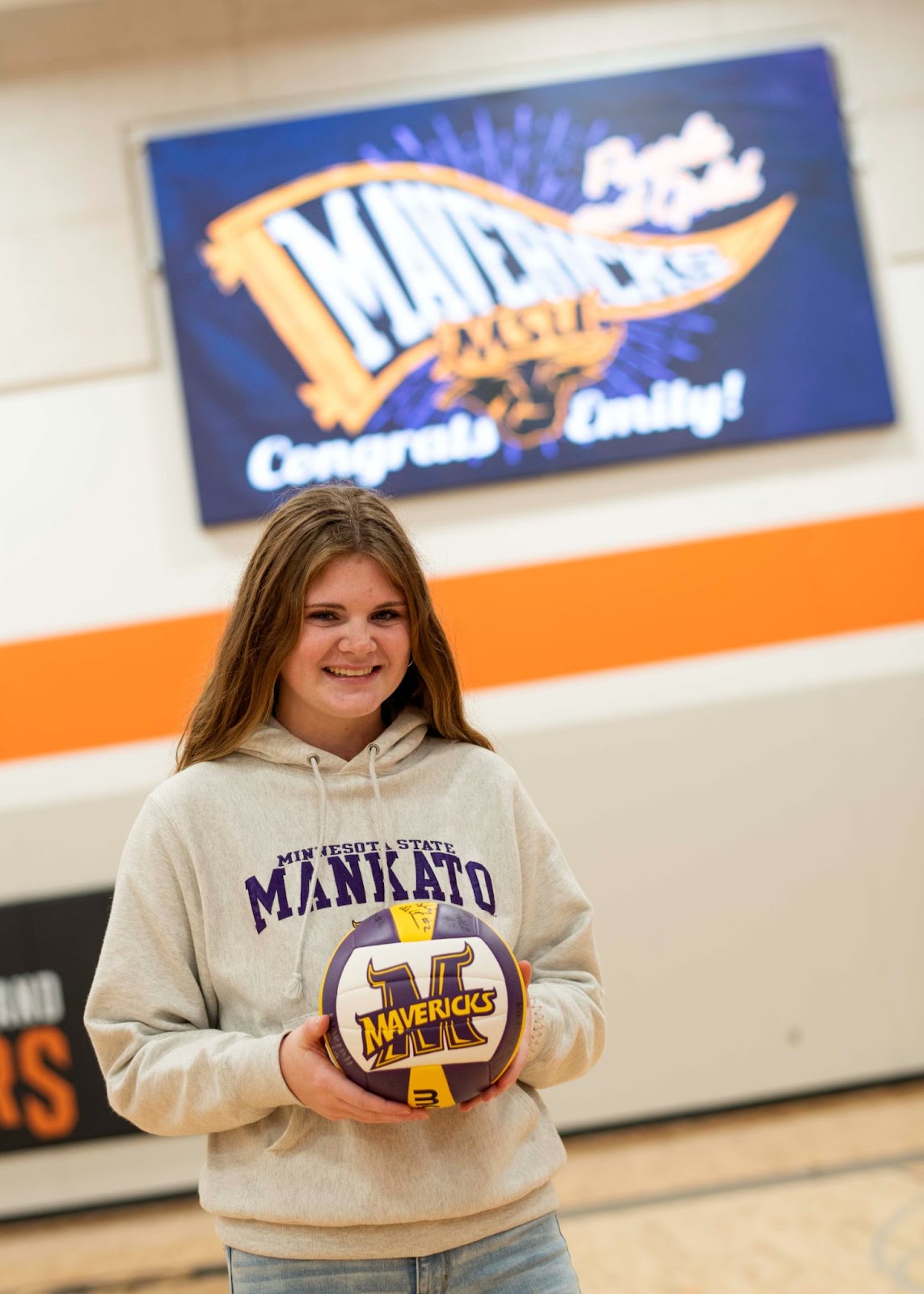