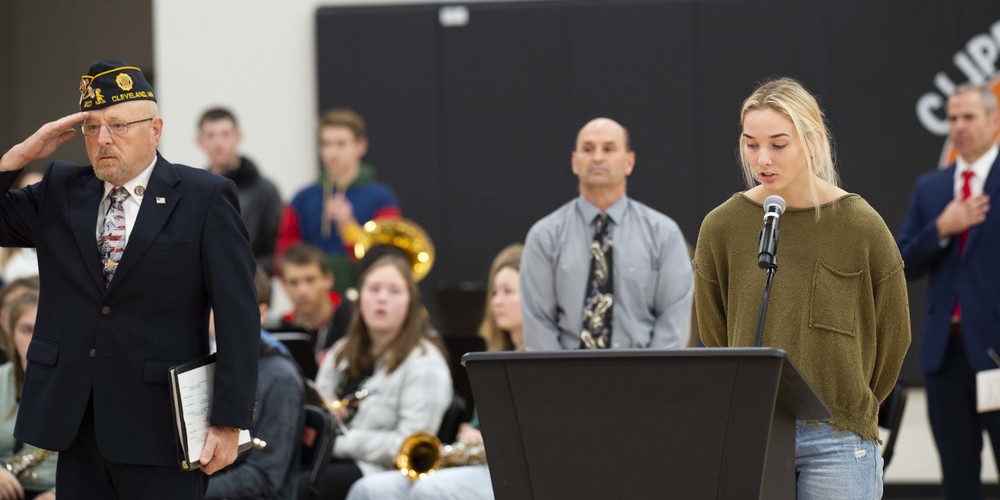 Sixth grader Kayla Hoffmann’s definition of a veteran was straight to the point.

“Being a veteran means you are willing to sacrifice yourself for others. They leave their homes and loved ones to fight for us.”

Hoffmann was one of three elementary students who were chosen to read their Veterans Day essays at Cleveland’s Veterans Day program, which was held in the new gym on Wednesday morning.

But once back in civilian clothes, Hoffmann went on to say, there is no set pattern for a veteran.

“A veteran can be many things, like a shopkeeper, or a mother or father or a dog walker, for goodness sake. But even though the war may be over, they are still a veteran at heart, so if you see a veteran or soldier today, please thank them for their service.”

Chosen from among the third and fourth graders to read her essay, Hadley Thompson, a fourth grader, had a similar definition. She evoked her great grandfather, who served as a soldier in the Army.

“He risked his life, like many people…we can’t thank them enough for what they’ve done. Love them like you would sacrifice your lives for them because they did for us.”

For Barett Vogel, a first grader, being a veteran came down to courage.

“These brave heroes went into a dangerous war for all of us.”

“Each time I read this speech, I feel these words are just as significant today as they were then,” Queen said.

After his speech, Queen presented band director Erik Hermanson a $5000 check from the Cleveland American Legion to go to the band's spring trip to Florida.

Members of the Cleveland American Legion, Legion Auxiliary and the Sons of the American Legion posted the colors. Firing a three-round salute, with directions by Queen, were Legion members Steve Biehn, Dave Voss, Kevin Derner, Leonard Seitz and Bob Hahn.

Directed by Hermanson, the 9-12th-Grade Concert Band provided music for the event, including the Star Spangled Banner and Armed Forces on Parade (Anchors Aweigh, The Caisson Song, The Marines' Hymn and The U.S. Air Force Song). 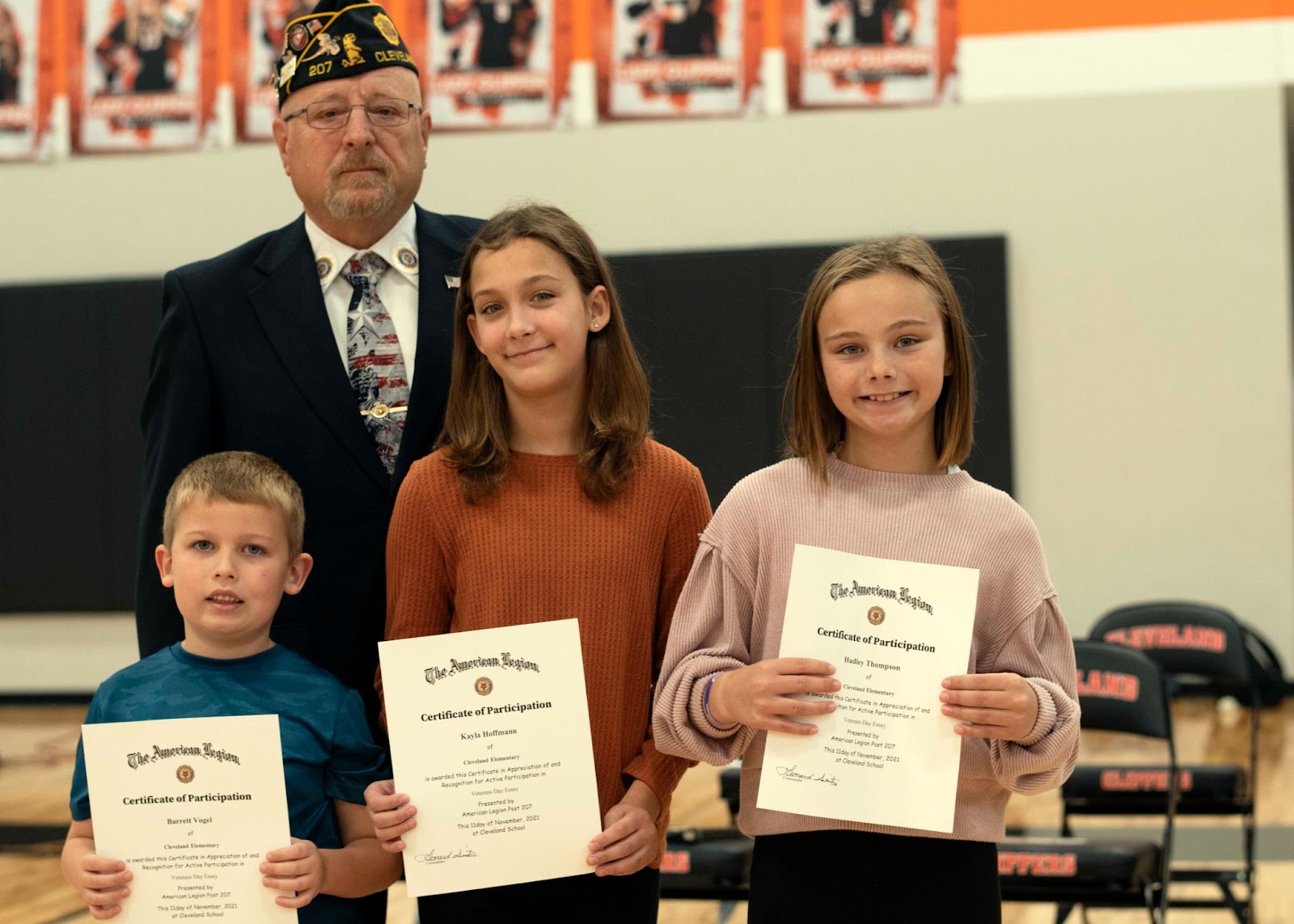 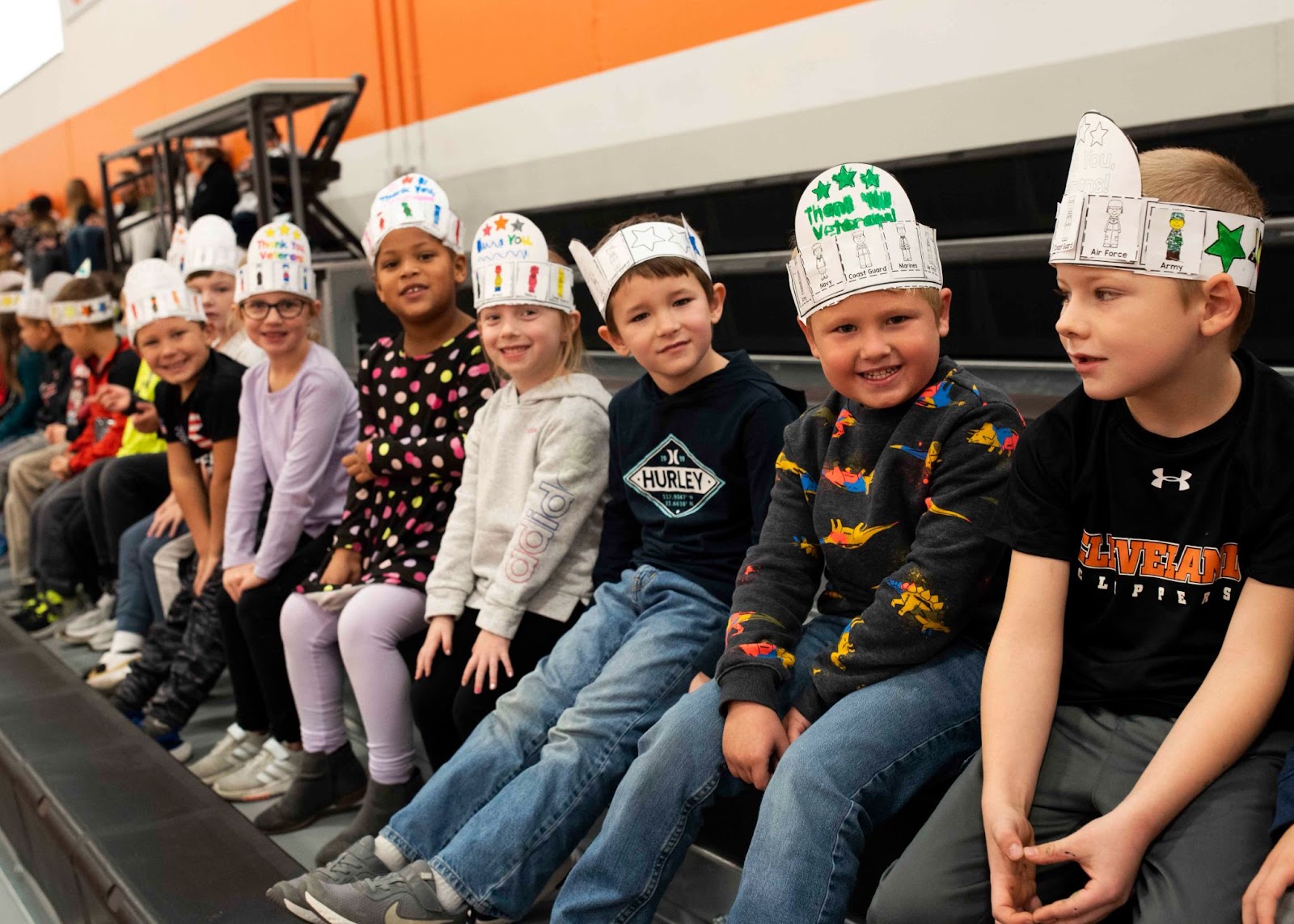 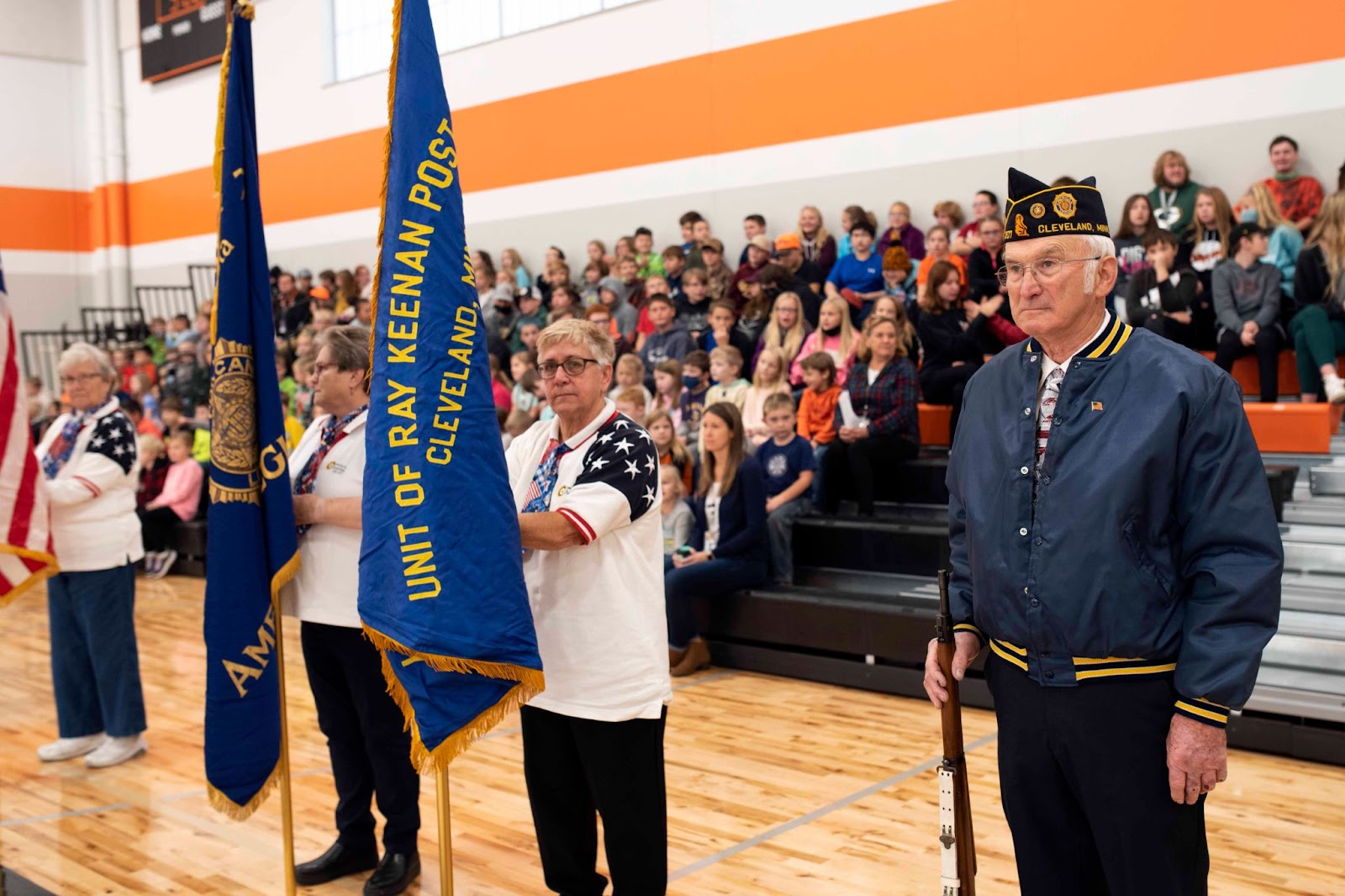 Becky Michels and Jim Beckel were among the members of the Color Guard. 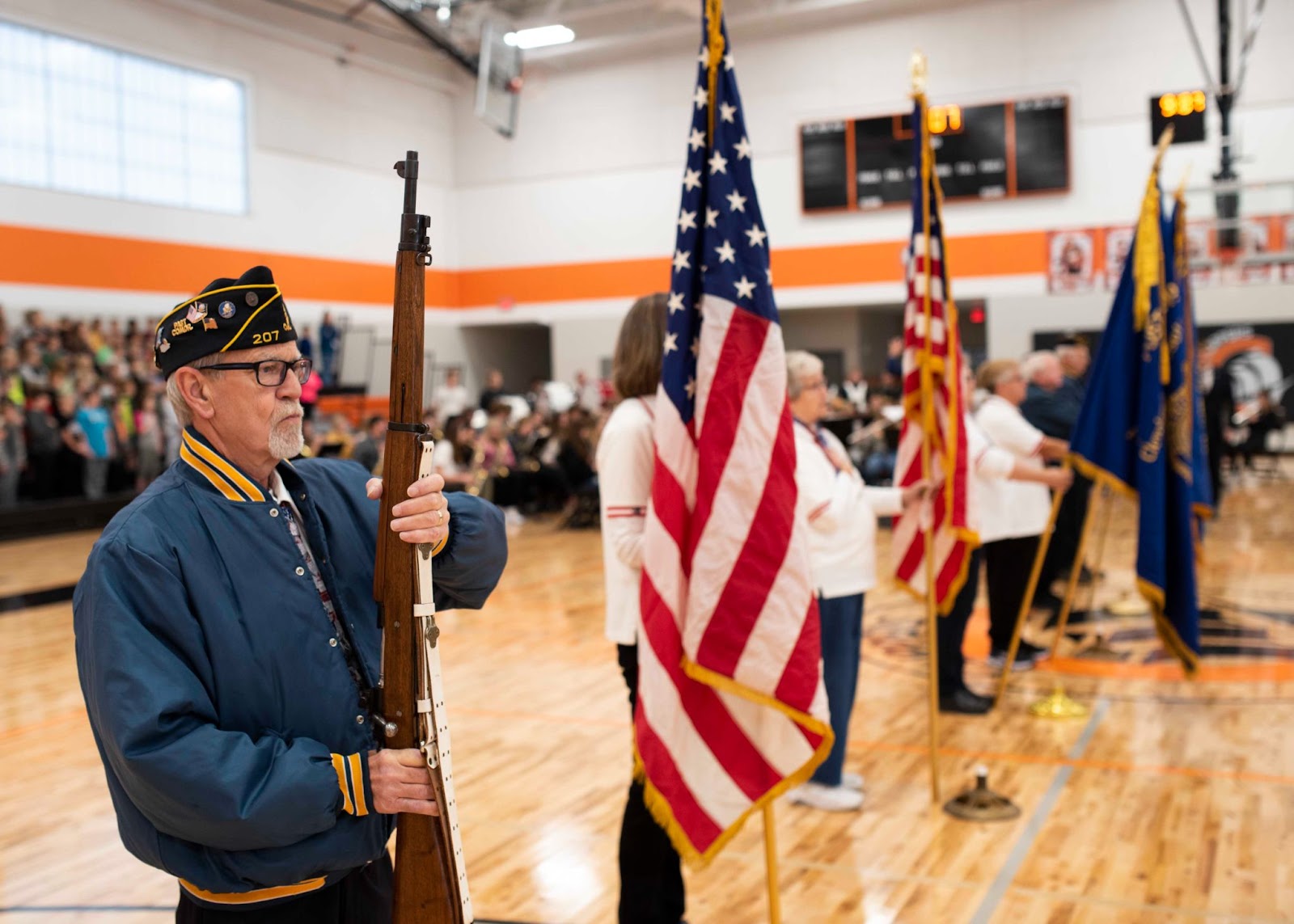 Another view of the Color Guard 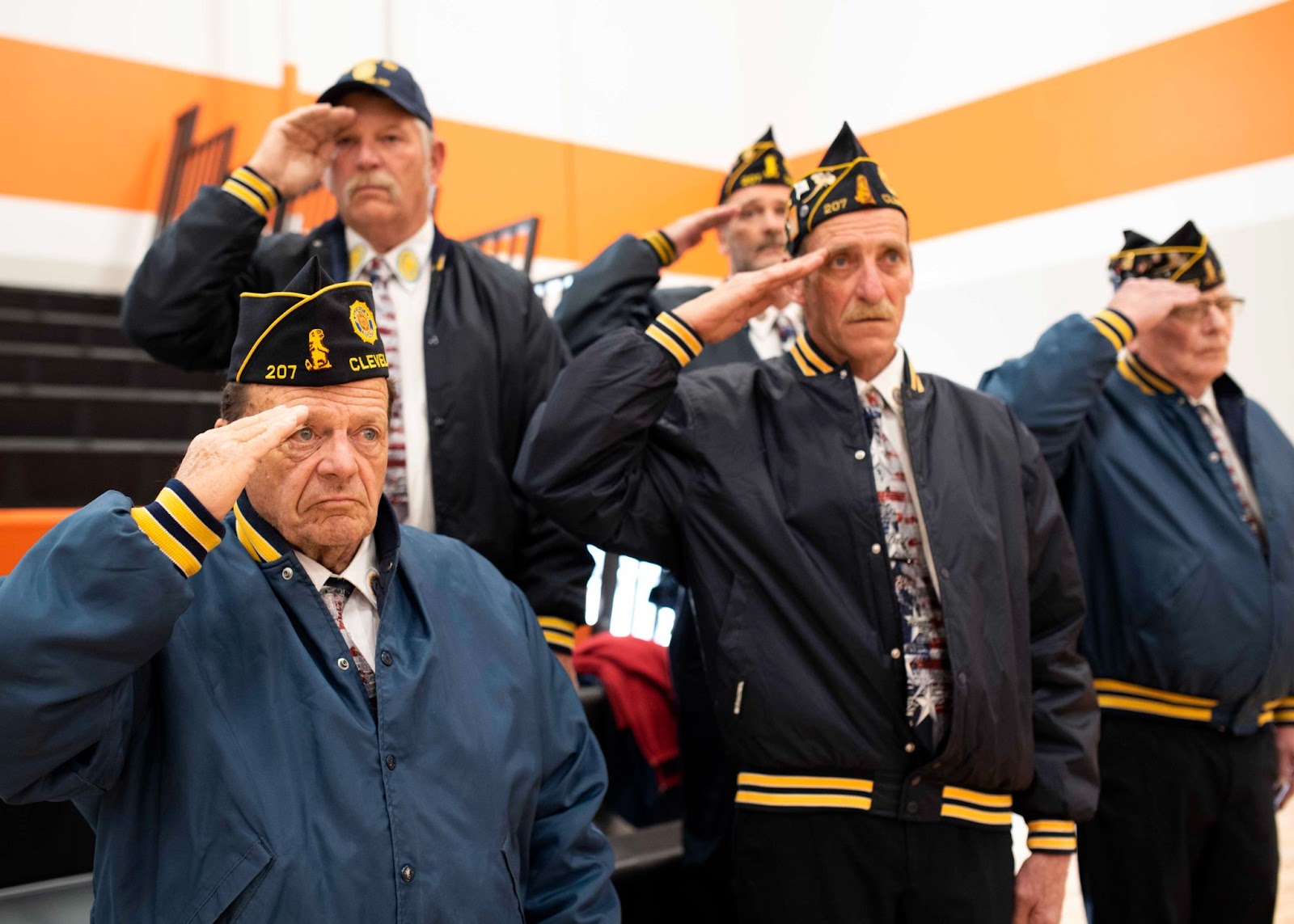 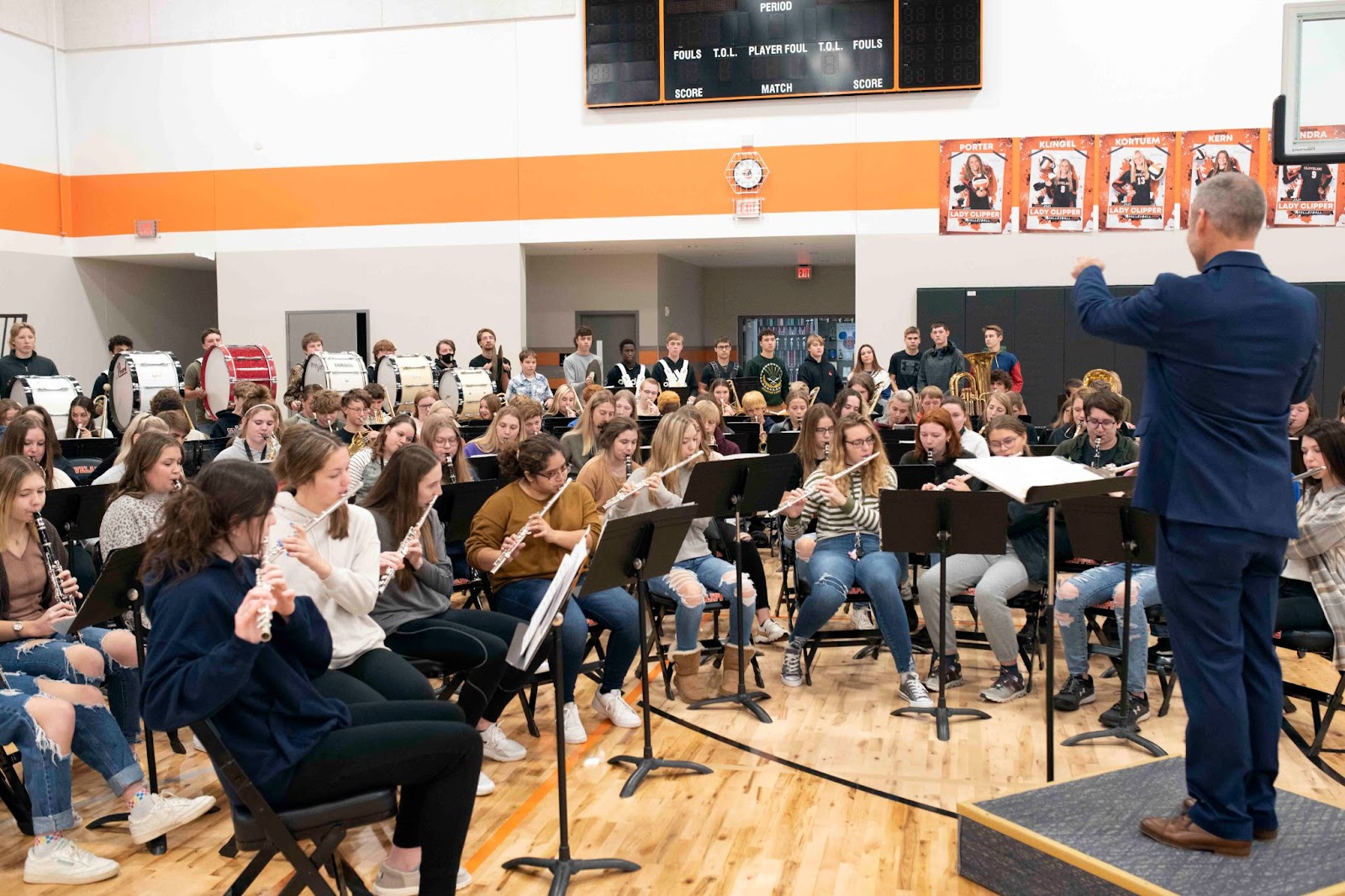 The 9-12th Grade Concert band was out in full force. 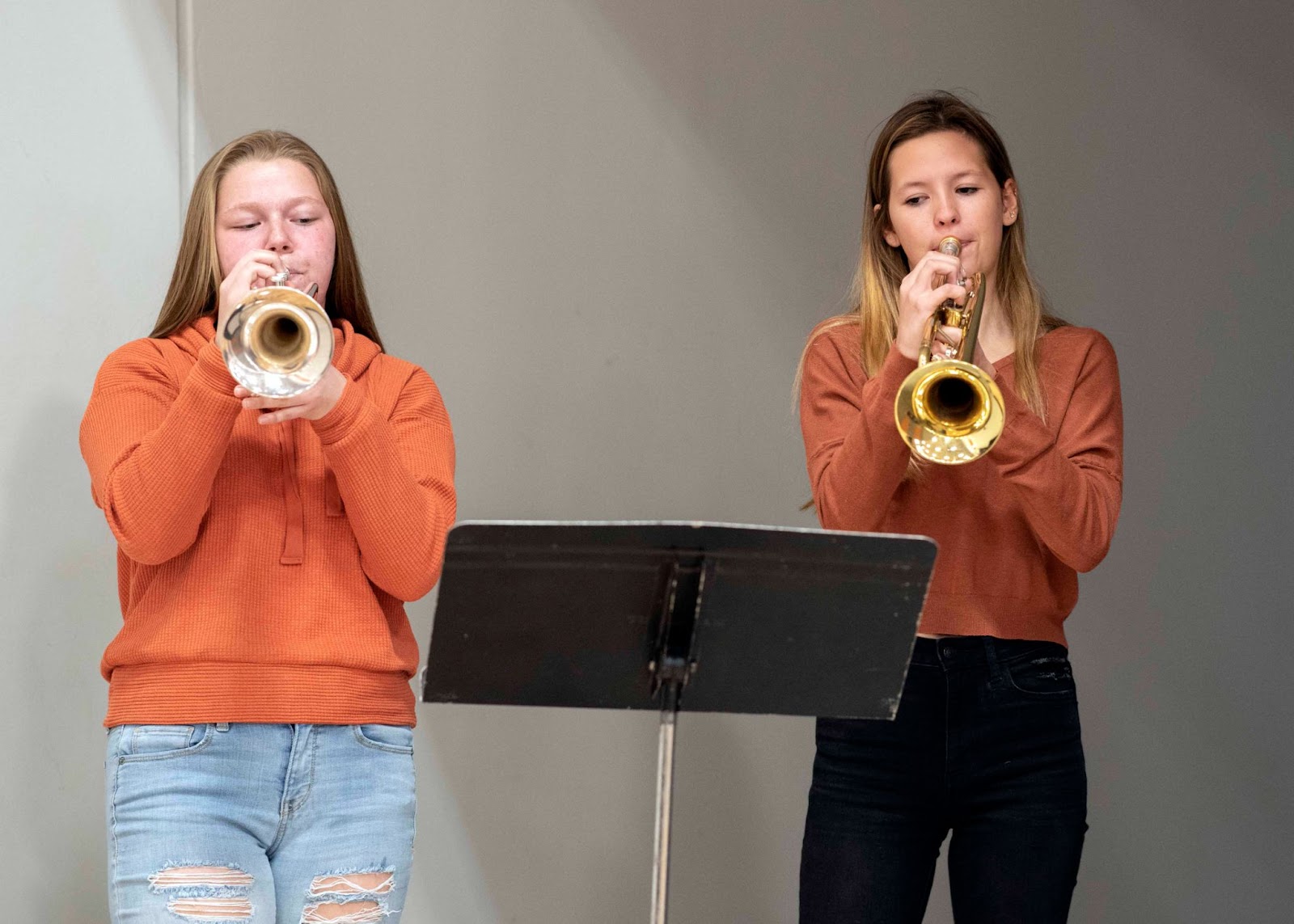 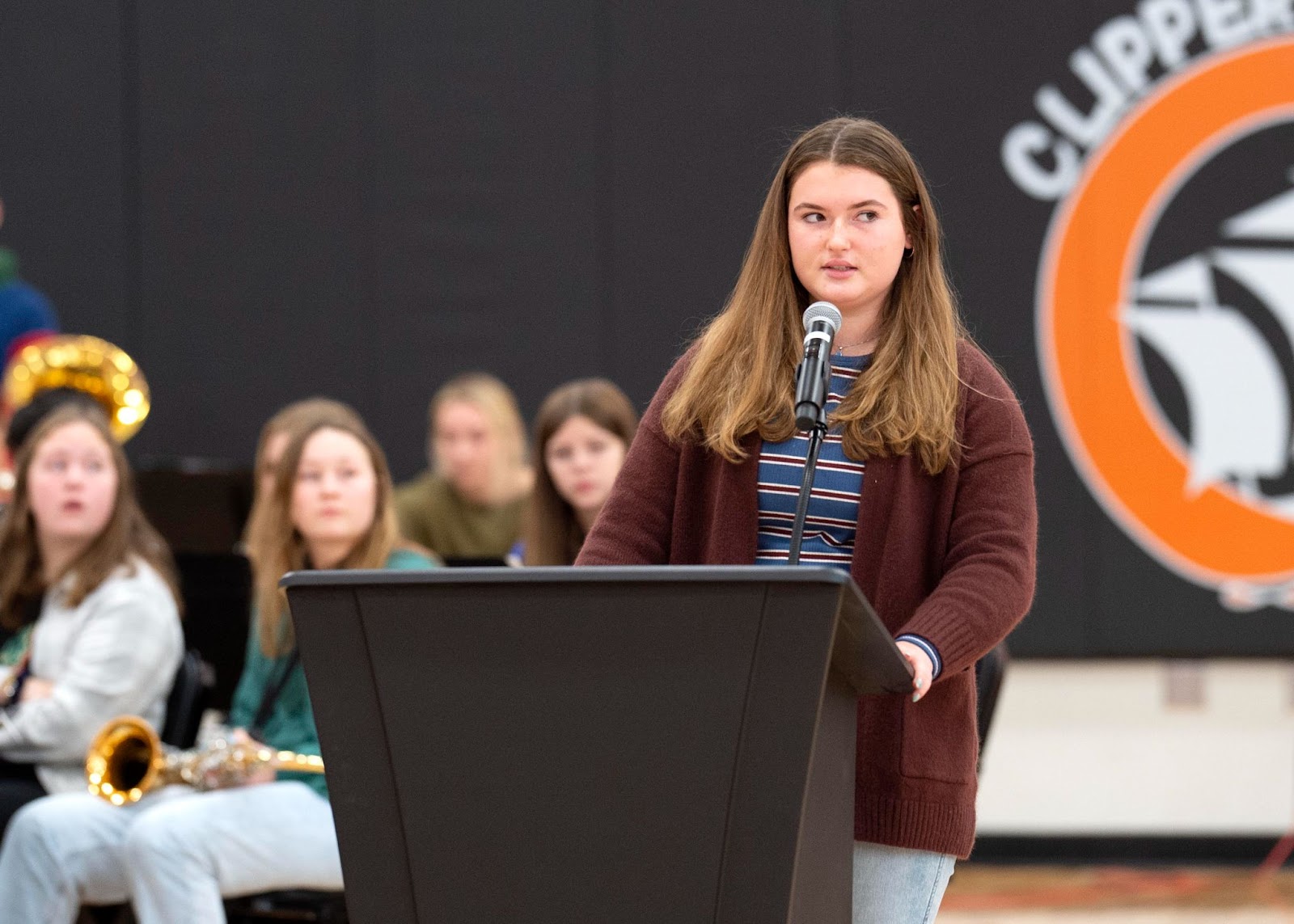 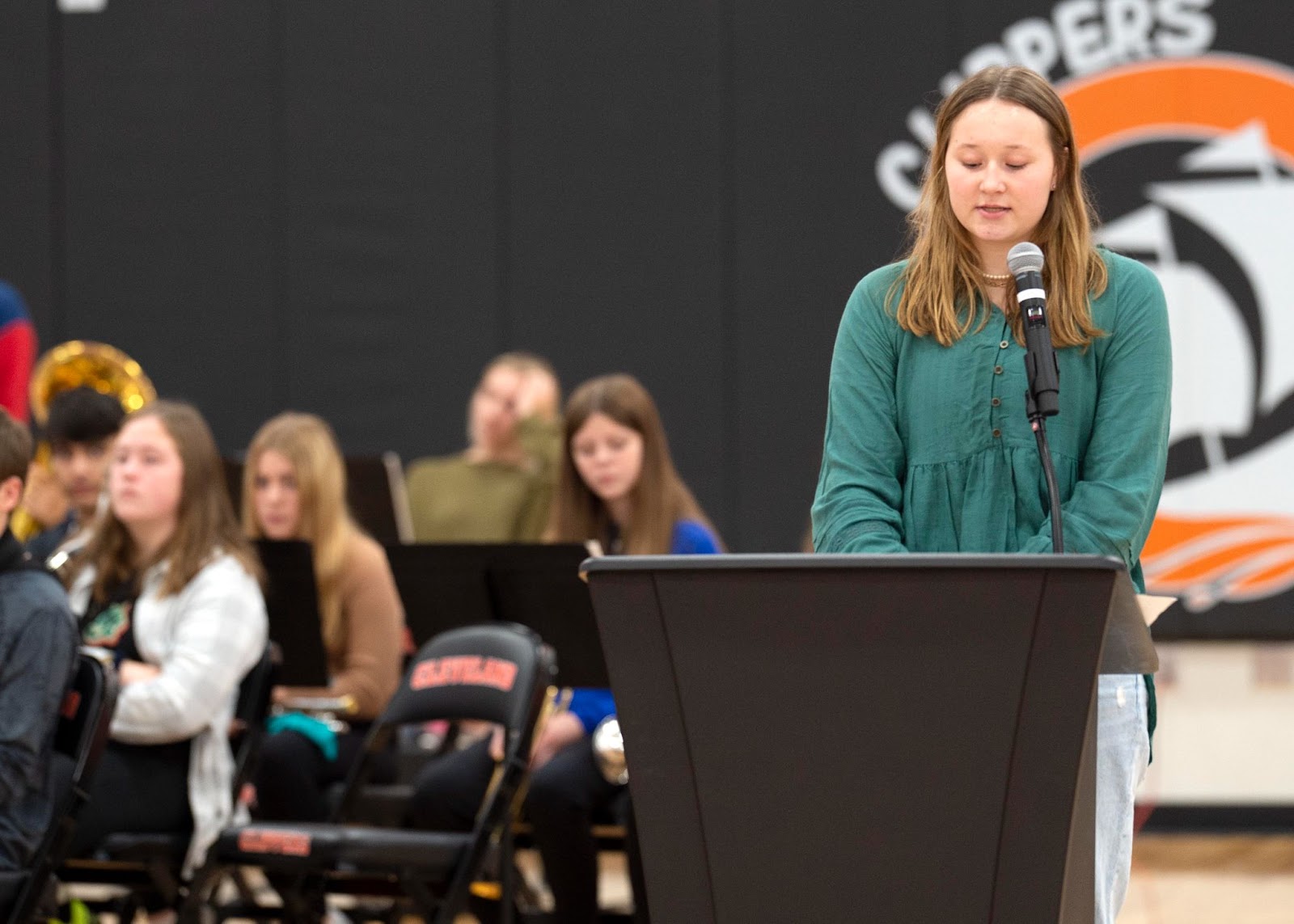 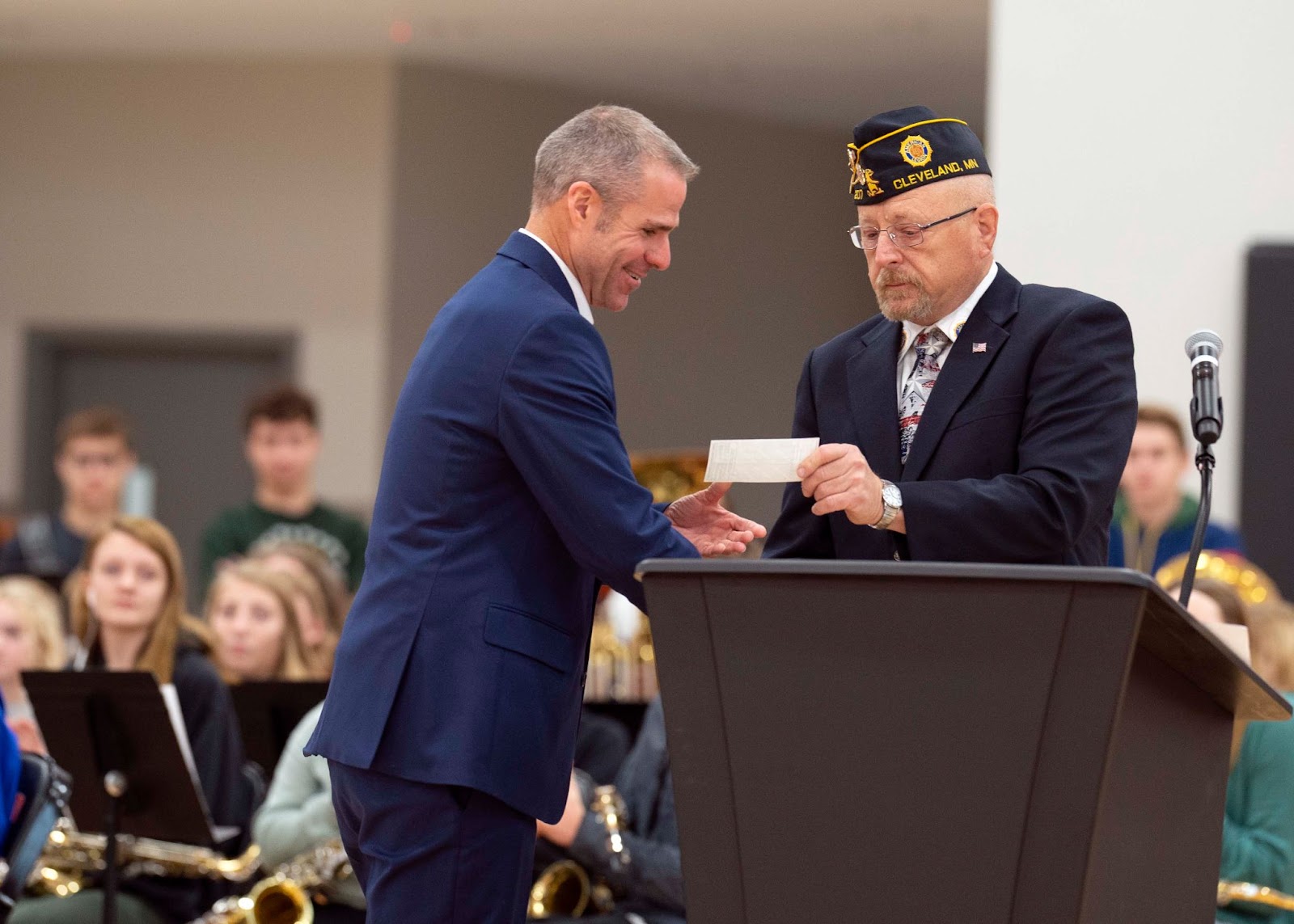 The ceremony was a good opportunity for Andy Queen to present band director Erik Hermanson with a $5000 donation from the Legion Club to go toward the band’s planned spring trip to Florida.