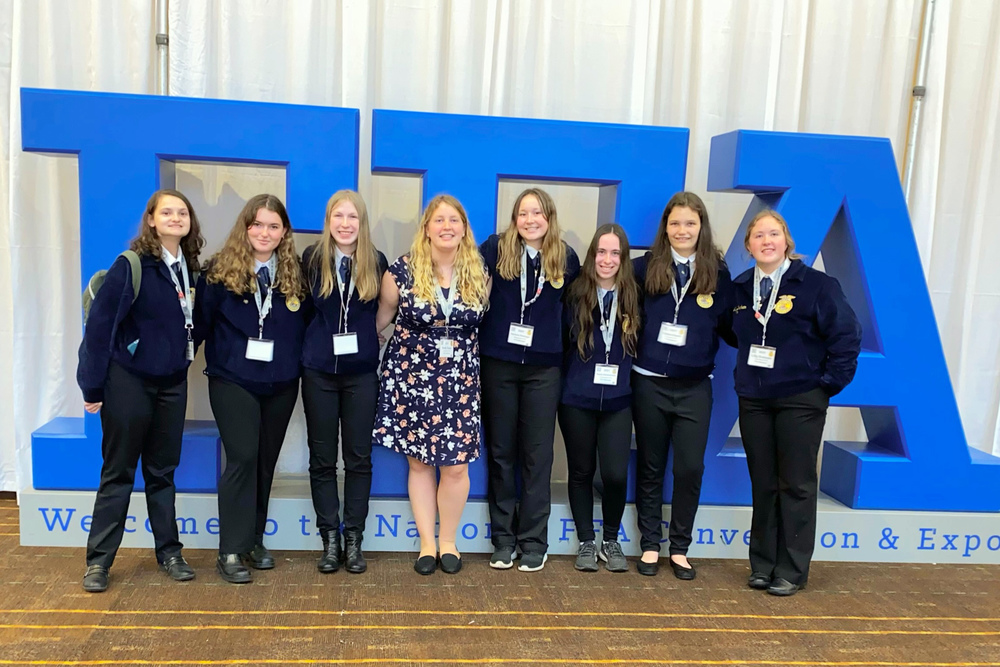 Clad in their traditional navy blue corduroy jackets, seven Cleveland delegates were among the 60,000 FFA members from across the country who flooded downtown Indianapolis October 27-30 for the 94th National FFA Convention & Expo.

The CHS students were chaperoned by ag teacher Kelly Susa, who resurrected Cleveland FFA a year ago after a 50-year hiatus.

"The National FFA organization makes a positive difference in the lives of students by developing their potential for premier leadership, personal growth, and career success for agricultural education," said Susa.

Leaving on Tuesday, October 26, the CHS group traveled in a coach bus with FFA members from other nearby schools: JWP, Mankato, GFW, and Waseca. Their bus caravanned with two other buses. They returned the following Saturday.

The convention and expo celebrated the achievements of FFA members and advisors as they networked with one another, and national delegates conducted the organization’s official business.

Hearing from industry leaders and motivational speakers, they participated in student and teacher career and leadership development workshops and educational tours.

“It was a cool experience to see over 60,000 other kids my age all coming together to learn while in official dress,” said Remiger.

Remiger enjoyed most the morning and evening educational sessions. One of the session speakers particularity impressed her.

“She told us that to live an extraordinary life you need to dream more, love more, and do more. I thought this was very interesting and impactful because as teenagers we are not quite sure what we are doing, so attempting to follow these few guidelines will help us try new things and step out of our comfort zones.”

The highlight of the trip for Zimmerman was listening to the national officers speak at the main convention and seeing groups get on the stage for winning awards.

“It was really inspiring to see kids my age accomplish so much,” she said.

The event also demonstrated to Zimmerman how large the FFA is outside of Cleveland.

“What impressed me the most was seeing just how many chapters from around the U.S. came to this event. I even saw some members from a chapter in Puerto Rico. It gave me a chance to meet other FFA members from other chapters too.”

Zimmerman plans to apply what she learned during the trip when she heads off to college next fall.

“I hope to use my FFA skills to accomplish my goals once I enter college next year. I will also continue to work towards earning my chapter/state degree during my freshman year of college if I am able to apply for them.”

The group made several pit stops along the way. Their first tour was not too far across the Iowa boarder, Seed Savers in Decorah.

Seed Savers Exchange is a non- profit that preserves and shares heirloom varieties of fruits, vegetables and even animals. "Heirloom" seeds are traditional varieties of crops, typically no longer used in common production agriculture.

An hour or so south of Chicago, they visited Fair Oaks Farm, the largest dairy farm in the United States. The farm also raises swine and has several education buildings with interactive education sessions on agriculture, dairy, swine, crop farming, and more. While there, they saw a calf being born and saw some newborn piglets.

They also visited Ozark Fisheries, an ornamental fish farm near Indianapolis. It is the oldest, continuously operated private fish farm in the United States. They supply many popular chain pet stores and also sell direct to consumers on Amazon.

Remiger said the entire trip was about strengthening friendships.

“Ms. Susa also always made sure we were having a great time and getting along. She played a huge role in this trips success and nothing would have gone smoothly without her. Whether it was looking through the expo and exploring new booths while eating Culver’s custard or ordering pizza at 1:00 in the morning, we truly enjoyed each other's company. All the naps on the bus ride or the tours we took also added to that fun and bonding.”

While the FFA kept the corduroy jackets, first worn in the 1930s, FFA is no longer is an abbreviation for “Future Farmers of America.”

Cleveland’s FFA program had a growth spurt this year and is now sitting at about 35 members, said Susa.

“Much like the goal of the national organization, we want to prepare the next generation of ag leaders. We do a few various projects throughout the year like the farm safety awareness assembly we held earlier this year, elementary ag day in the spring, National FFA Week the last week of February, and a few more we are going to try out this year.”

Students had to pay a small portion out of pocket for the trip while the rest was covered by the chapter through their various fundraising efforts throughout the year. They are currently selling Butterbraids and holding a community craft fair on December 4th to help fund future trips, Susa said. 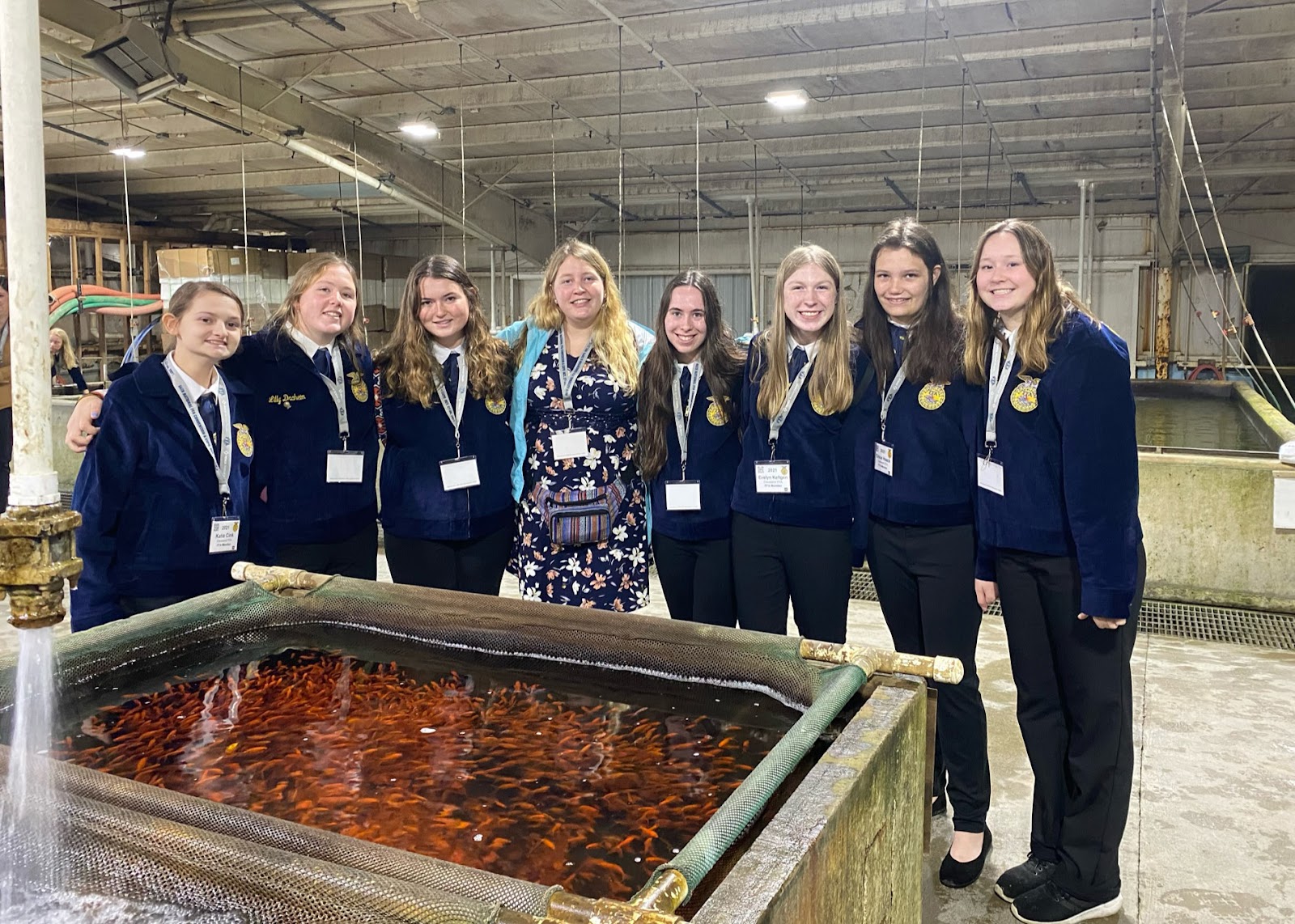 The Cleveland delegation poses in front of a tank of ornamental fish at Ozark Fisheries. 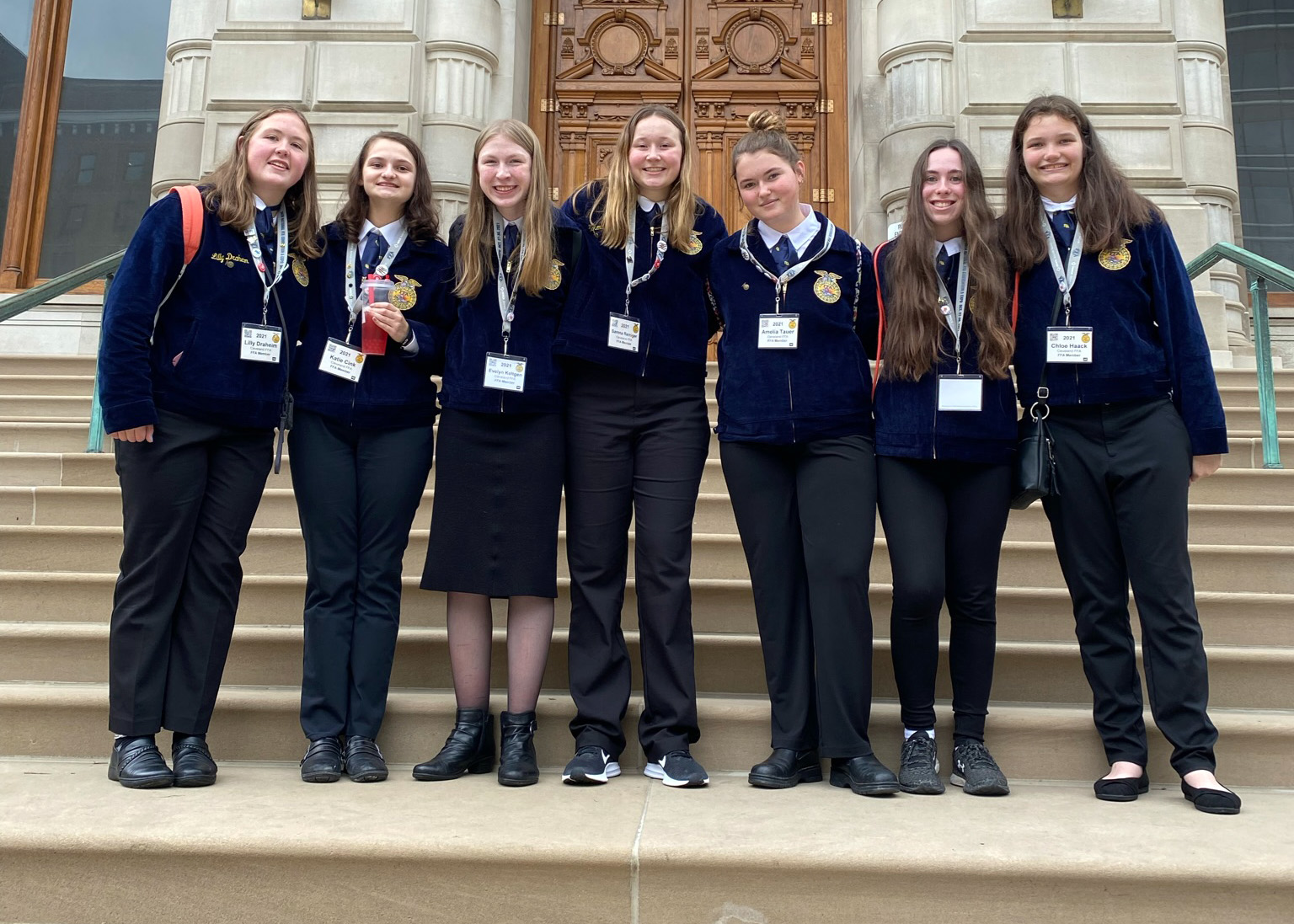 The group poses on the steps of a building in downtown Indianapolis.

All photos courtesy of Kelly Susa.