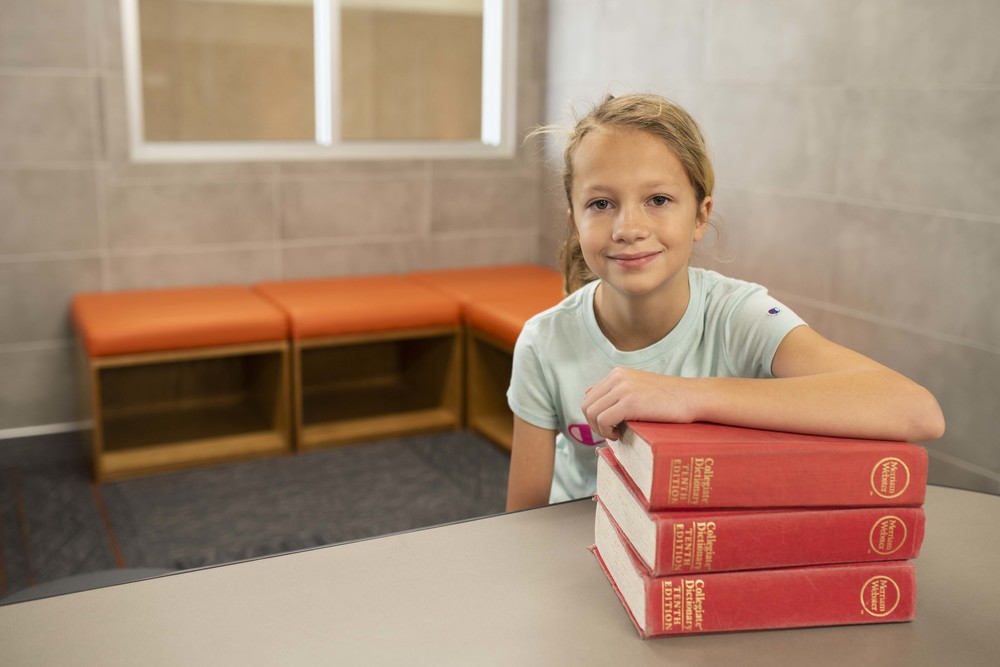 With that correct spelling of a word that means "to expend or give in great amounts," Cleveland fifth grader Mattea Grandaw (above) beat out a dozen competitors, including upperclassmen, to win Cleveland’s grade 5-8 spelling bee.

The contest was held in the school auditorium on Thursday.

While spelling is far from a favorite study of many students, Grandaw said she loves the subject, especially since she is good at it.

But she said winning the bee, her first ever, came down to rehearsal.

“I practiced the spelling bee practice pages with my mom. At first I spelled lavished wrong, but then I practiced it more, and I got it right.”

Despite living in the age of auto-correct, Grandaw thinks learning to spell words correctly is a worthwhile endeavor.

“If you know how to spell well, you will be smarter when you grow up...and more successful.”

Since studies show that spelling, reading, writing and comprehension skills are closely linked, Grandaw is spot on. Furthermore, mastering those skills is more important for than ever in this age of rapid, mass communication.

To make it to the competition, each grade had a contest of its own. Other competitors from grade five were Kaelyn Blaschko, Blake Stocker and Jessilynn Milnes. Sixth grade participants included Anika Sathoff, Aubrey Blaschko, Luci Blaschko and Ethan Hoehn. Representing the seventh graders were Henry Boelter, Anthony Torres and Charlie Maxfield.

Seventh grader Anna Lamont and eighth grader Vivian Hilfer made the cut but did not compete. Sixth-grade alternates Ava Kluntz and Jax Leagjeld competed in their place. Austin Tarkey and Jackson Mons were also alternates.

Former CHS teacher and librarian Virginia Grabow was the pronouncer.

Grandaw, the daughter of James and Brandi Grandaw and the granddaughter of Chris Thomas, will go on to compete at a regional level on February 22 in an online platform.