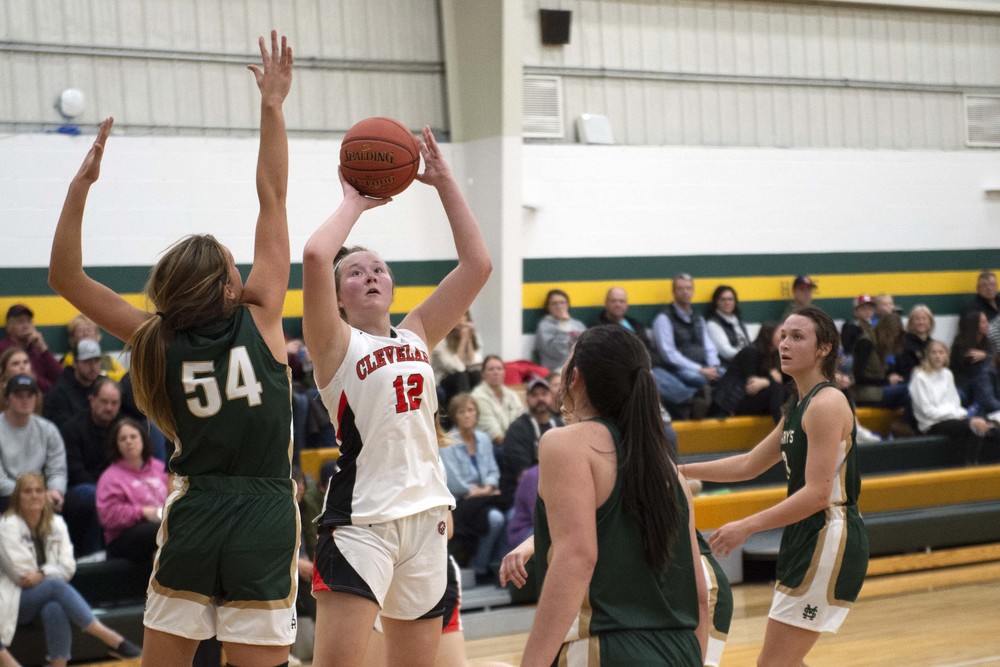 Above: Sarena Remiger coils for a jump shot.

Facing host Sleepy Eye Saint Mary’s, a team that made it to the second round of the state tournament last winter, the Clipper varsity girls jumped head first into their season on Friday.

The Knights dominated the Clippers 89-33 in a four-team tip-off tournament. The Clippers return to Sleepy Eye to take on SE Public today (Saturday) in a 2:30 contest.

“You got to get game one out of the way sometime,” said head coach Joe Remiger. “They may not be the team they were last year, but at the end of the day, they’ve got some really good ball players. They are where Cleveland basketball wants to be as a program…that we need to take steps to get to.”

Remiger said the Clippers have the pieces to get there, despite losing last year senior starters Macey Ziebarth and Halle McCabe.

Starters for the Clippers were guards Greta Hahn and Kaylee Karels and forwards Emily Kern, Laci Hollerich and Sarena Remiger.

The Knights were up 9-0 when Hahn, a 5-4 sophomore, drove the baseline for the Clippers’ first basket. Hahn took the ball through the paint for the Clippers’ next basket too. Later, Remiger, a 6-0 junior, scored inside, and Karels, a 5-4 junior, dropped in a three, but the Knights still led by 20 points.

With a pair of Kern freebies, a couple of Karels drives to the hoop and a three from 5-5 freshman Ava Hahn off the bench, the Clippers went on a 7-point run, but the Knights picked off their passes after that with six steals in the first half. Micah Peterson, a 5-5 junior, sunk an inside basket to close the half, and the Clippers trailed 51-22 at the break.

“It we would do little things right or even better,” it would change a lot,” Remiger said. “Getting back on defense; that was pretty much nonexistent tonight. I think it just shows how out-of-shape we are. Offensively it’s our basic V cuts, set and screen, setting them on a person instead of in an area. We did do well setting screens from the guard down to the posts.”

Kern, a 6-1 senior, scored early in the second half, but the Knights went on an 11-point run after that before Remiger spun inside for two points. The Clippers were held to just three more baskets from the floor after: one by Kern, one from Remiger and one by freshman Lacey McCabe off the bench—and the Knights cruised to the triumph.

“It’s game one. It’s good to get out of the way,” Remiger said. “We can’t let tonight determine who we are, because we are better than that. It’s just going to take some time to get there.”

The Clippers made a pair of three pointers and were 5-9 at the free-throw line.

Other players who got in court time were freshman Addi Holden, sophomores Mariah McCabe and Asia Kern, and junior Ava La France.

“I love to see these young girls get in,” Remiger said. “For some of them, they have never been on a varsity floor, so for them to realize it’s the same basketball you play with, that’s a good thing and for them to get some confidence. If they show a little promise, I have no problem if they get a ton of playing time this year. I’m kind of leaving that up to them.”

In the earlier game, Sleepy Eye came back from a 14-point deficit to beat BOLD. 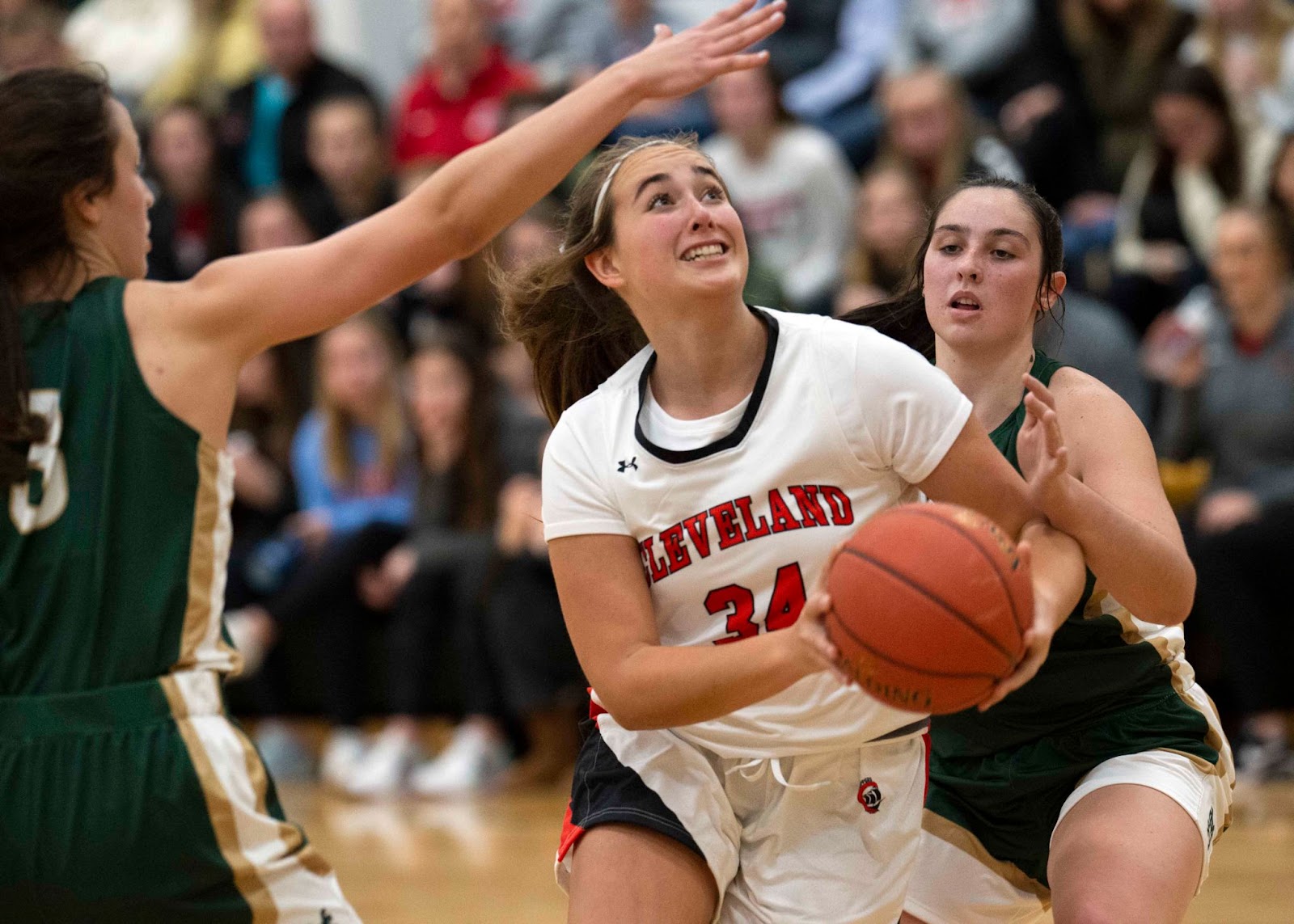 Laci Hollerich looks at the basket. 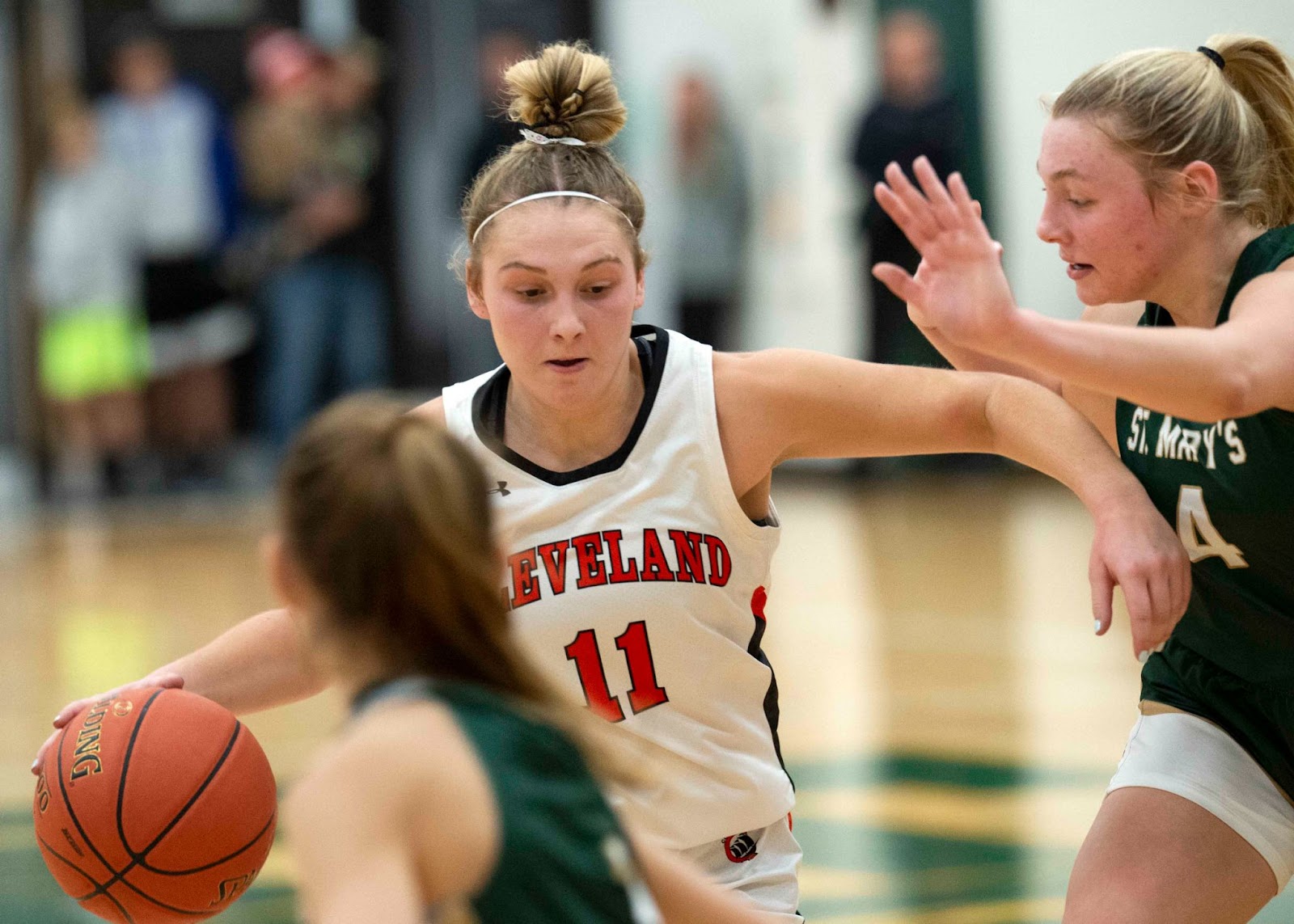 Kaylee Karels battles around a pair of defenders. 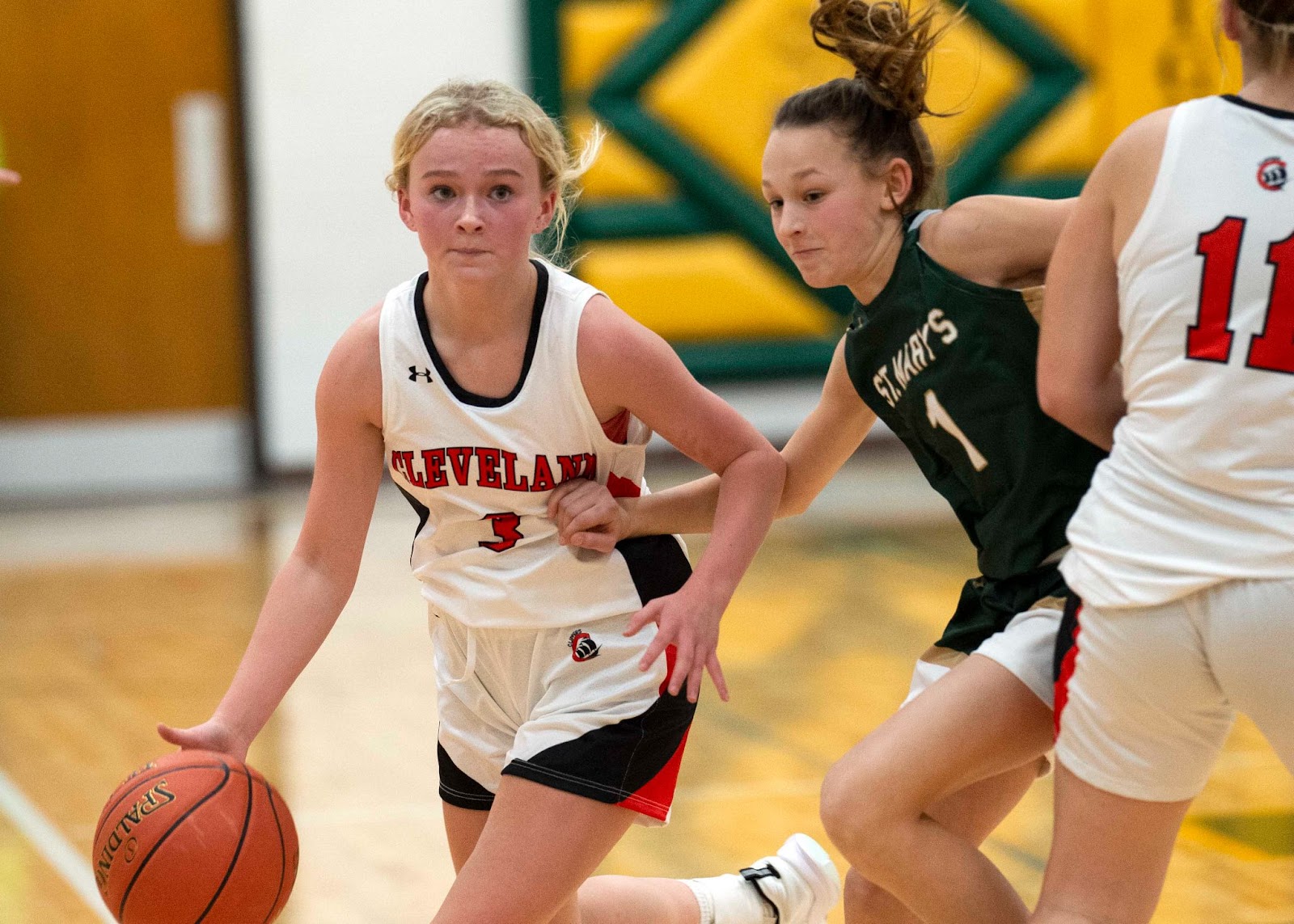 Greta Hahn cuts around a screen. 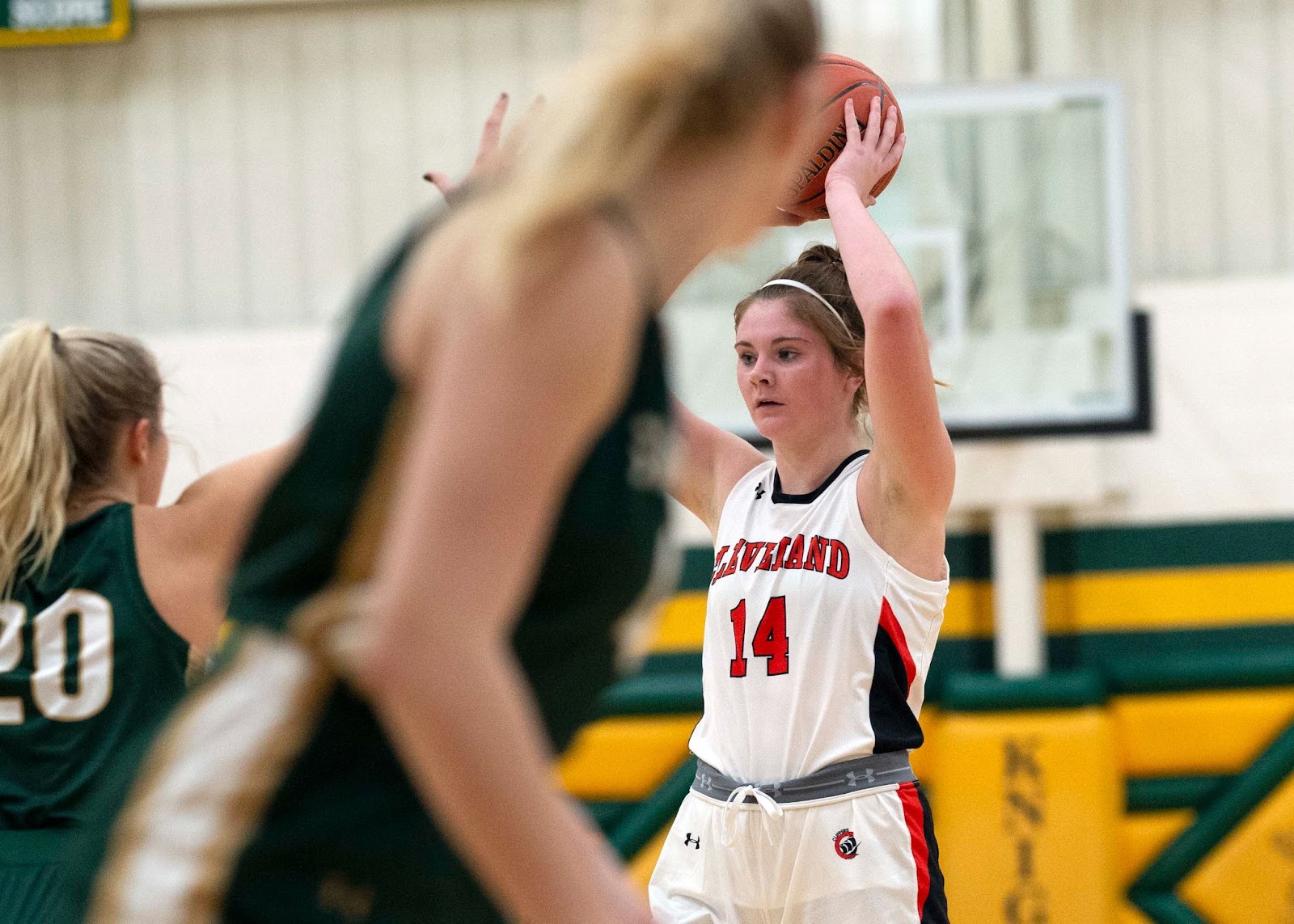 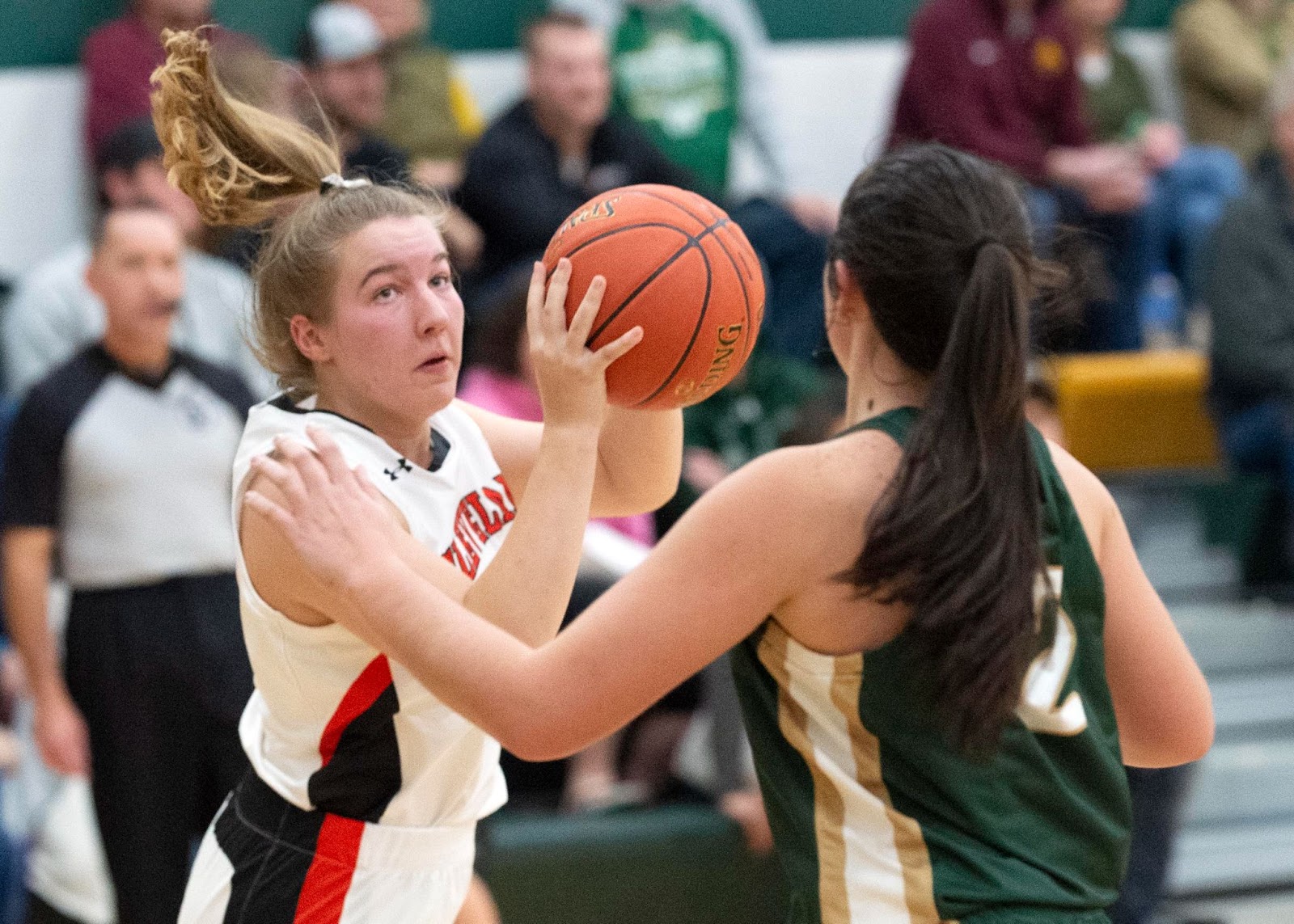 Micah Peterson eyes up the basket. 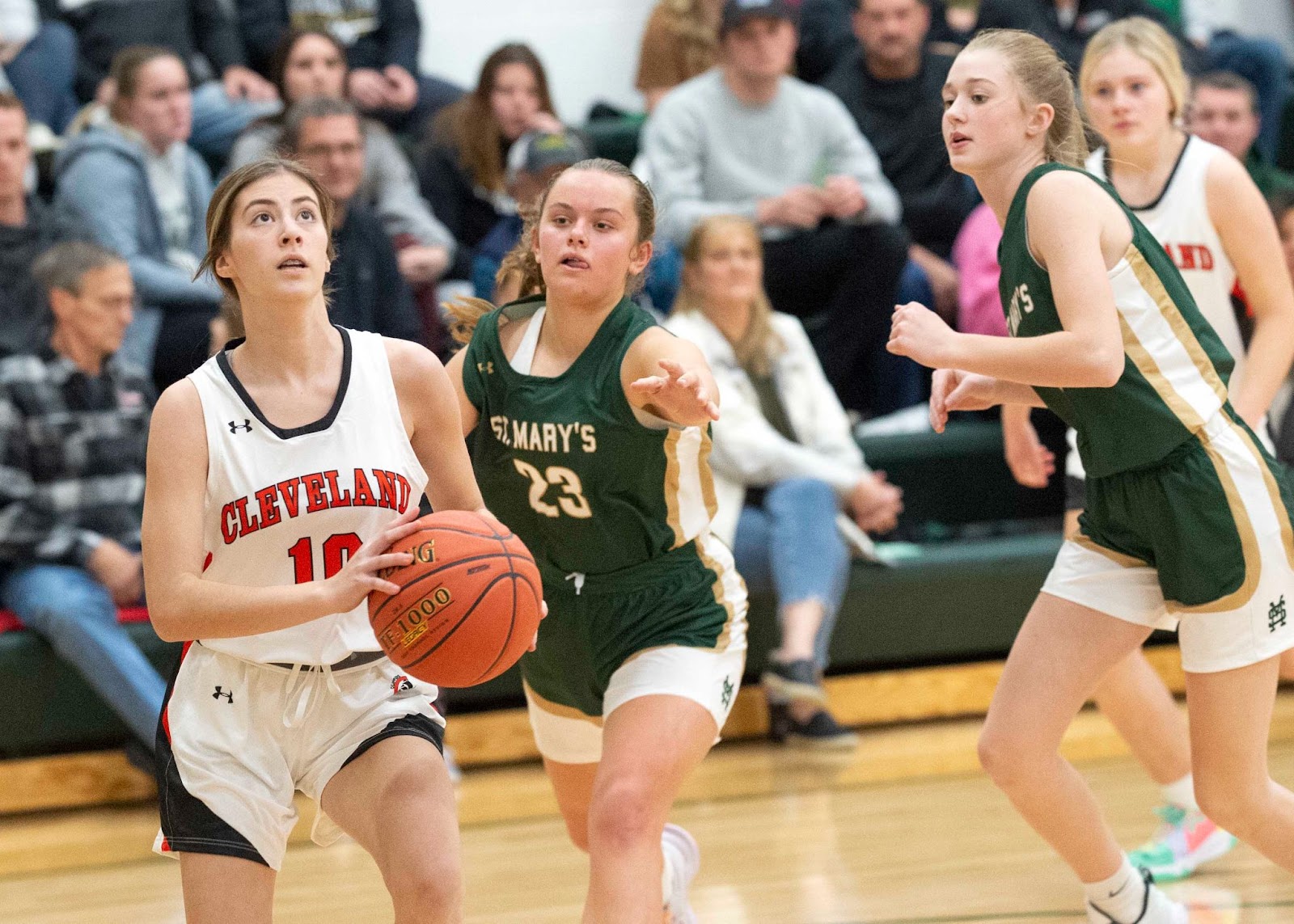 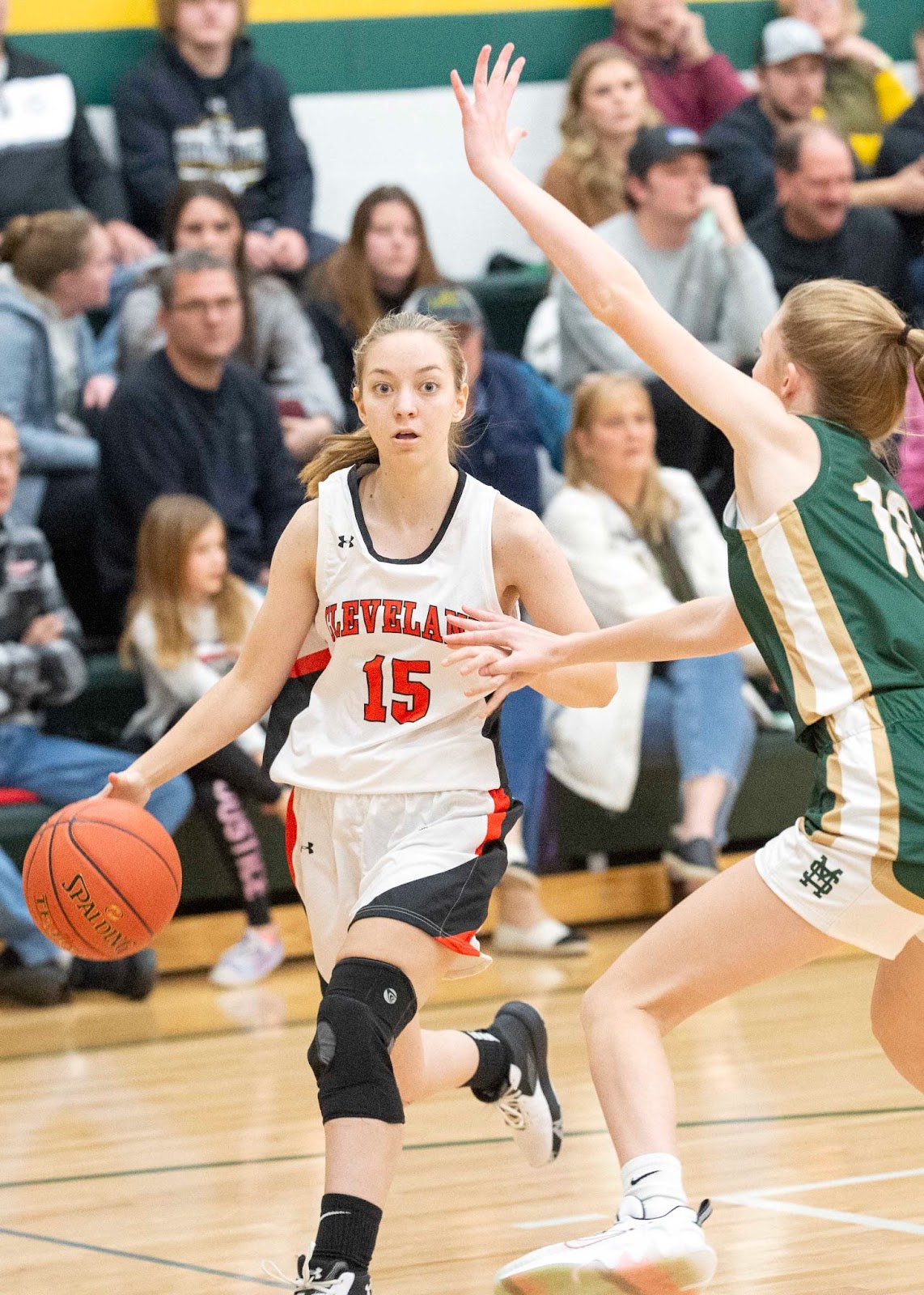 Ava LaFrance dribbles toward the basket.