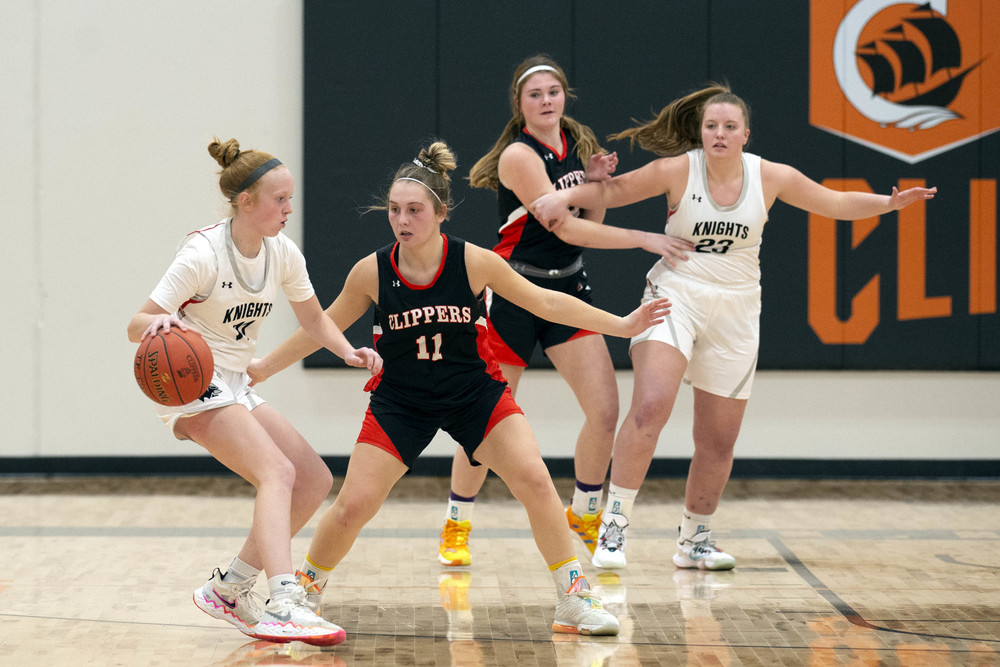 Above: Defense high and low was key to winning the home opener.

While the competition was not up what the Clipper's varsity girls faced on the St. Mary’s court over Thanksgiving break, they looked like a different team on Tuesday when they defeated visiting Alden-Conger/Glenville Emmons 48-25.

It was the Clipper’s home opener, and the first varsity basketball game played in the new gym.

“Sure, it’s your home court, and so let’s defend the thing,” said head coach Joe Remiger, “but I think tonight, and even in practice yesterday, we just worked on some little things; let’s try to change this and this and see where it leads.”

While the other four starters competed in the new gym in volleyball, it was a first official game there for Kaylee Karels.

She led the Clipper effort with 21 points.

“It’s a completely different environment and a lot of fun to play on,” Karels said. “I love how the fans came and having a lot of room on the court…it’s a lot easier to move the ball.”

The 5-4 junior guard said it was an important victory for the 2021 version of the Clippers as they work to define themselves.

“Down in St. Mary’s we really know how to play, but now we really showed who we are.”

With the Clippers intercepting a number of Knight passes, the defense made the difference.

Greta (Hahn)…Kaylee…Ava (Hahn) decided ‘you know what? These Alden girls are going to struggle bringing up the ball, so I’m going to take it on myself to play in their face.’ Maybe they don’t get the steal, but the one who, when they make the pass to the next person, does get the steal. I was glad to see that.”

The defense was working down court too. Remiger said A-C/G-E had big posts, but the Clippers kept them in check.

“You better move your feet and be ready to play, and so Laci (Hollerich) and Sarena (Remiger) and Emily (Kern) and even Emma Treanor, who has been off a few days and gone, and so I remember a lot of times tonight where it was like ‘wow; nice box out there.’”

Karels took a shooting foul right after the Clippers won the jump. She made the front end of two freebies and followed up with back-to-back three pointers for a 7-0 start and a lead her team would never relinquish.

Remiger scored from under the rim on an in-bounds pass before the Knights, frustrated by Clipper steals, finally got on the board at the 13:42 mark.

Down 16-3, the Knights spurted for seven points, inducing a pair of baskets from three-point land.

“It seemed like we were at 16 points for ever and a blue moon, and then we also stopped in the second half at something, but our defense didn’t stop,” Remiger said. “They (the Knights) really didn’t gain anything.”

Finally, Remiger popped in a jumper from the free-throw line and then took an Ava Hahn pass up and in while Karels followed with a  two and another three, and the Clippers were in front 28-15 at the break.

Hollerich drove the baseline for the first basket of the second half. Karels pulled down a rebound after her own shot and scored, and Hahn put in a two and a three to widen the Clipper lead early in the second half.

“I told them that we were going to get a punch in the second half; that Alden’s going to come out ready play,” Remiger said. “But if you can come out in the first 5 minutes and (keep the pressure on)….”

Later, Karels hit another three, and Kern scored on a layup.

“We were taking a lot of shots, but last year we were begging them to take shots,” Remiger said. “Maybe we’re shooting a little early; let’s think a little bit before jacking those, but we can get that reined in.”

When Hollerich fouled out with three and a half minutes left, the rest of the starters came out with her. The B-squad allowed three points, but Lacey McCabe took a Hahn assist in for a layup for the game’s final basket.

A dozen of Karel’s points came from beyond the arc. Remiger had 10 points, and Hahn added nine points.

“Ava got a lot of playing time,” Remiger said. “She hit some shots, but she was second guessing herself, hesitating and she traveled, but (I told her) if you’re open, shoot the ball.”

Kern chipped in four points, and Hollerich and McCabe each scored a basket.

The Clippers were 5-11 from the free throw line. The Knights were made seven of 20 free-throw attempts and two three pointers.

The Clippers, 1-2, 1-0 in the Valley Conference, will have another conference game today (Friday) when they travel to Madelia. 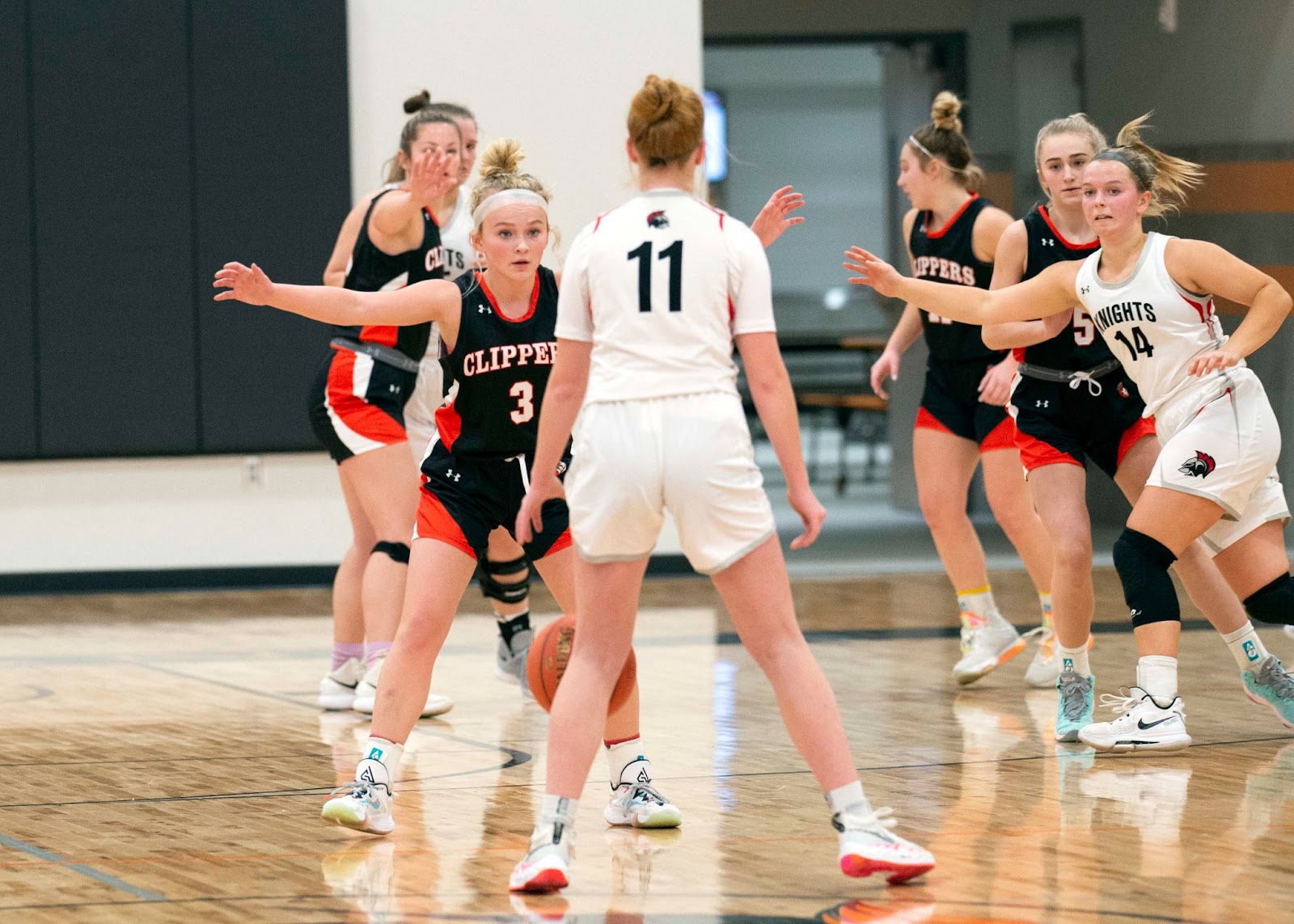 Greta Hahn sets up on defense. 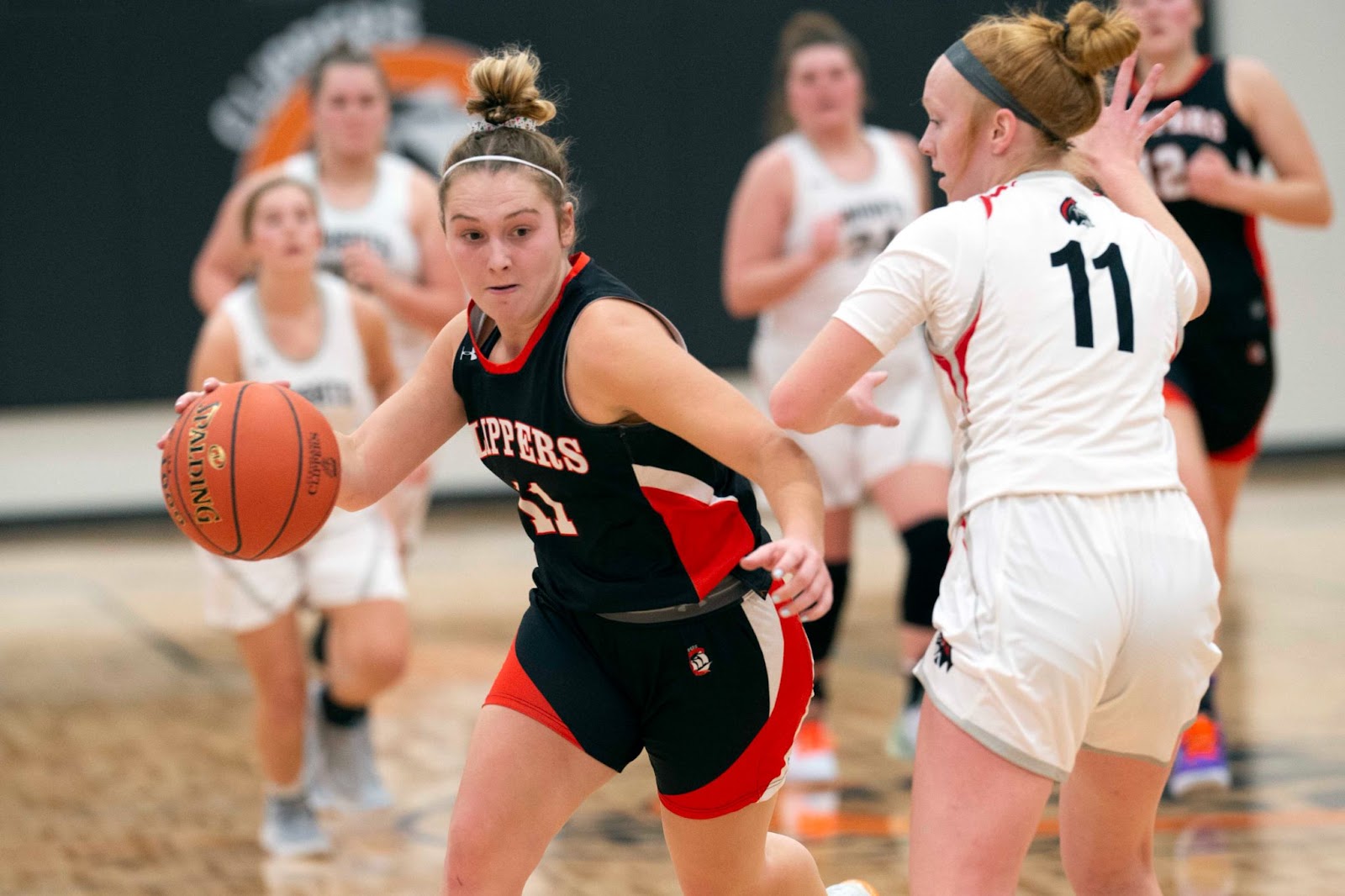 Kaylee Karels drives to the iron. 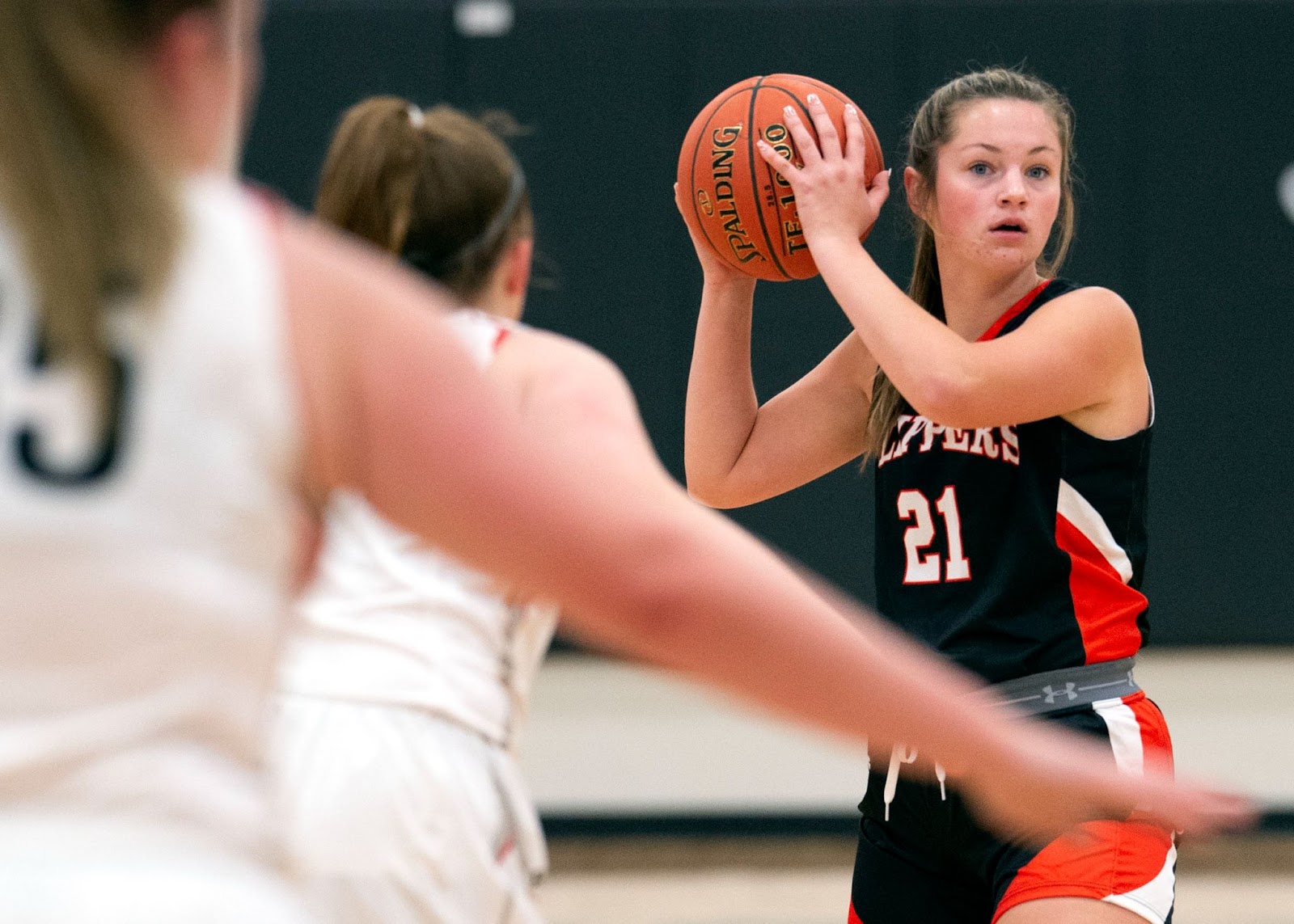 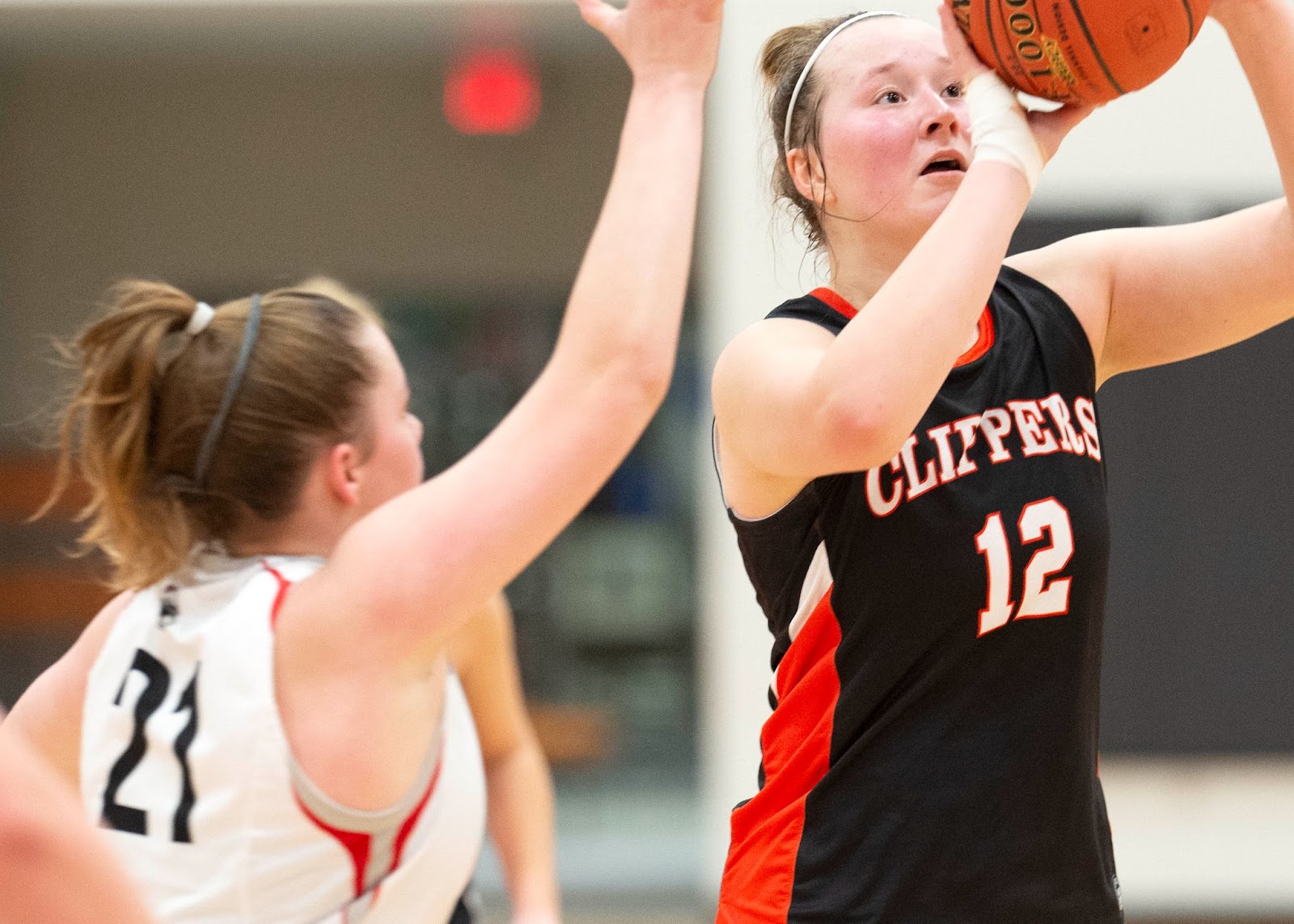 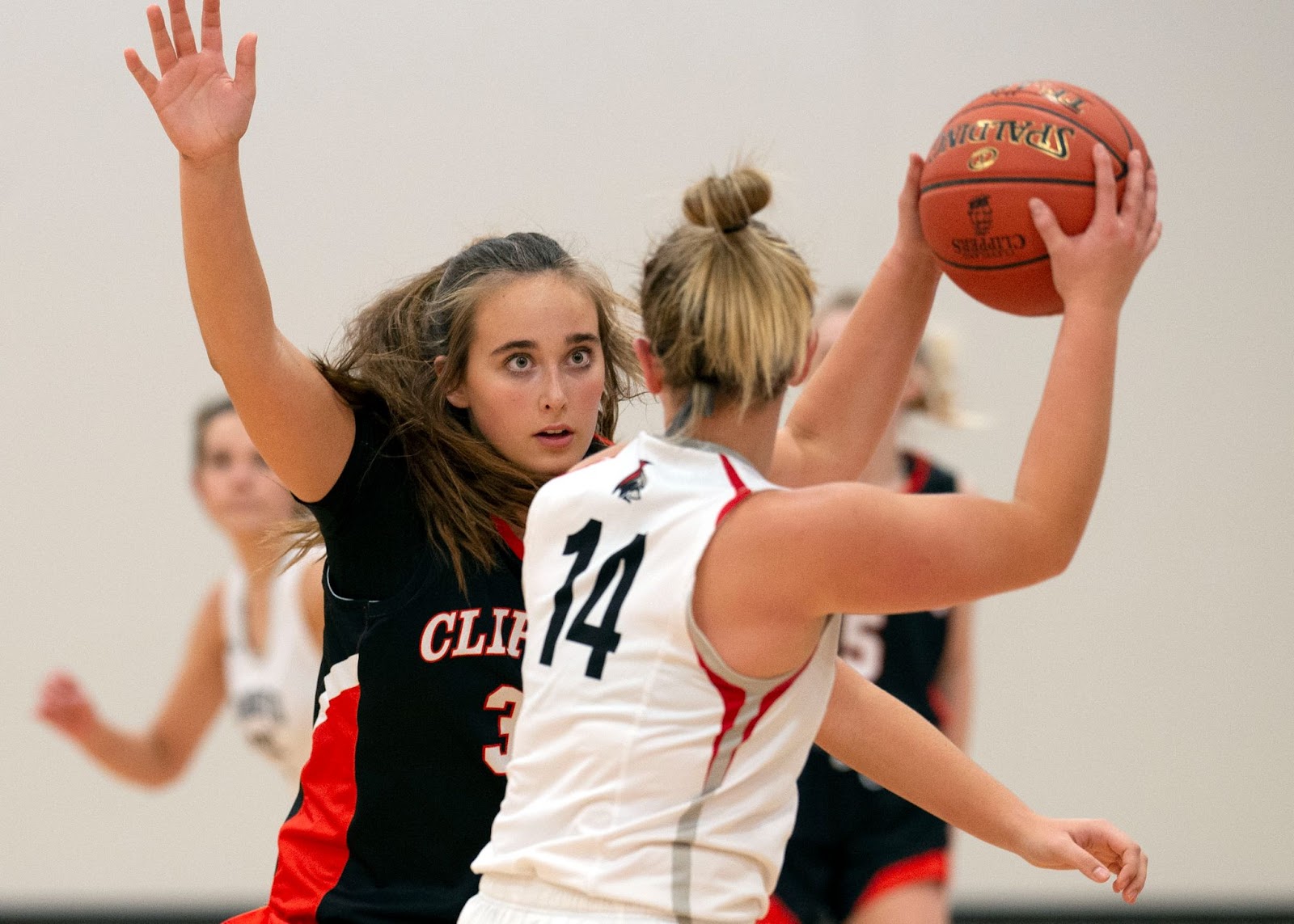 Laci Hollerich eyes up a defender. 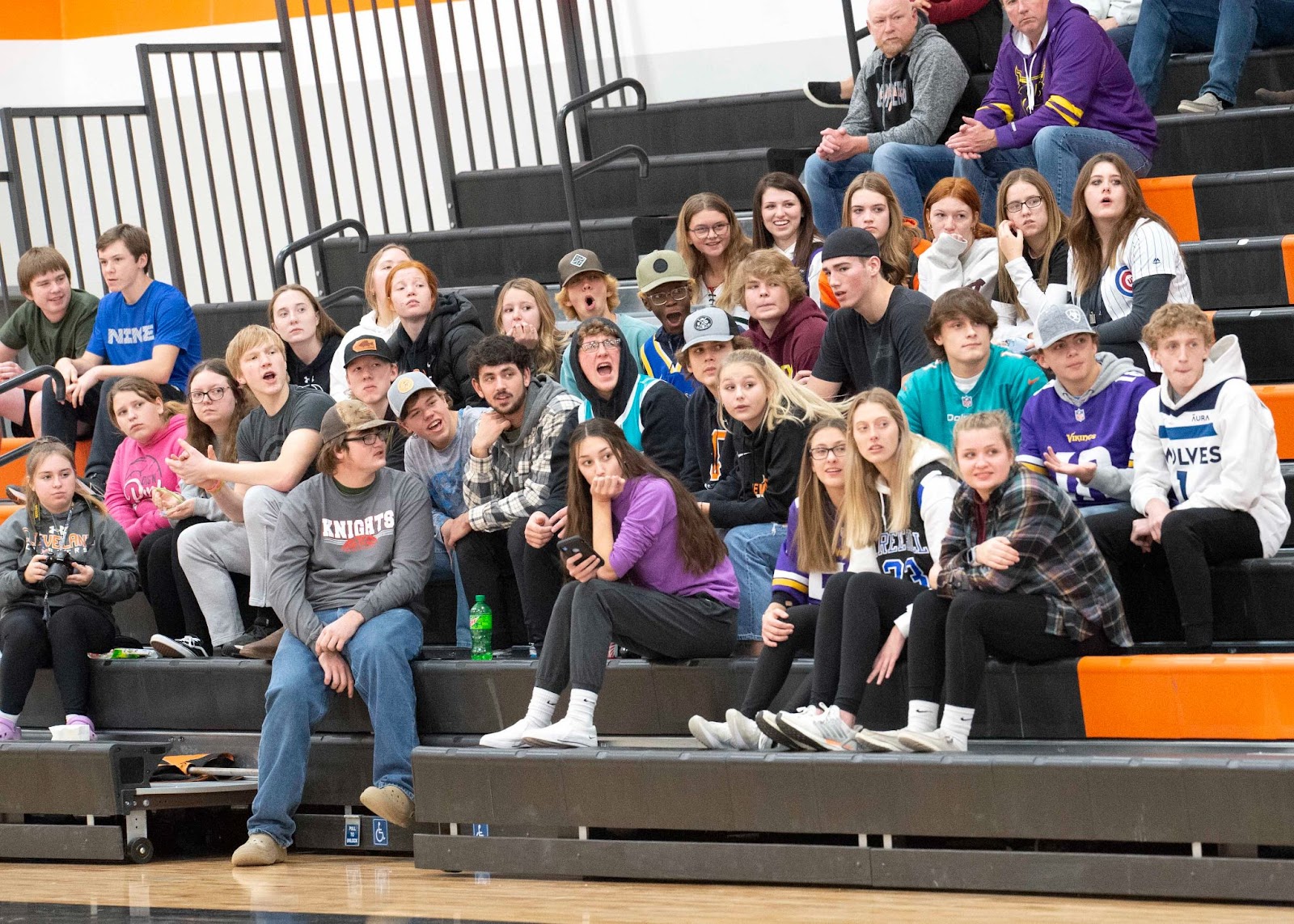 While it was jersey night in the student section, some of them didn't get the memo.