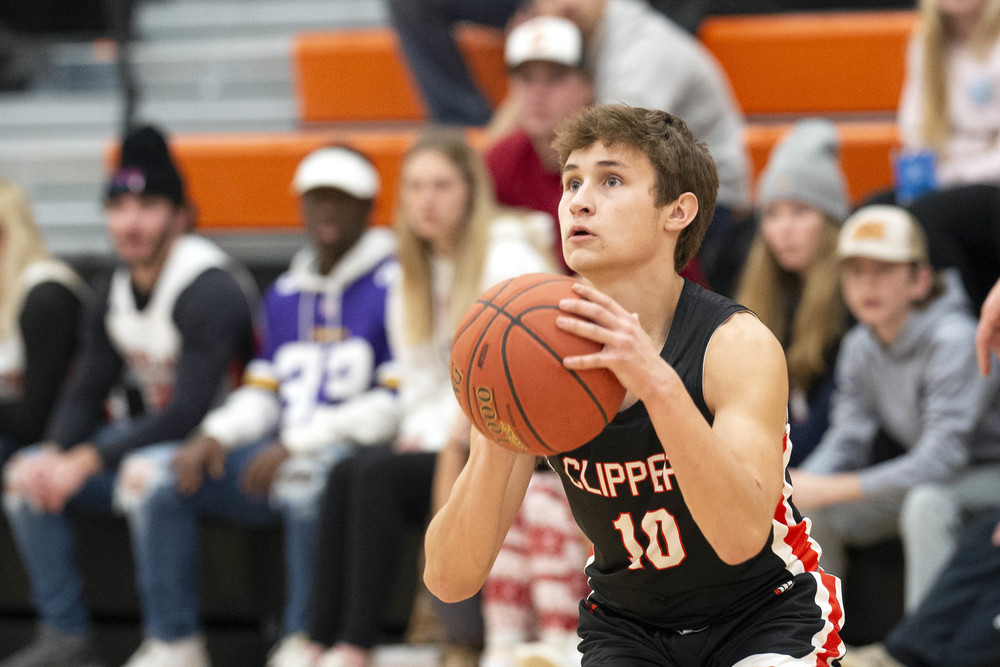 Above: Braeden Hastings had a quartet of three-point baskets against Madelia.

Upping their game but not enough put a check mark in the win column, the varsity boys fell 78-45 to visiting Madelia on Monday and 91-50 to Truman/Martin Luther/Granada-Huntley-East Chain in Granada on Tuesday.

Against Madelia, the Clippers faced D1 prospect Ja’Sean Glover but still managed to only get outscored by a point in the second half. Head coach Mike Meyer said it was the Clippers' best effort so far this season.

After a couple of Madelia threes, the Clippers were down 8-0 when Lucas Walechka pulled down an offense rebound and scored.

Madelia drove for layups after that, and the Clippers didn’t score again until the 7:53 mark when Kolby Gens made a pair of free shots.

Later, Gens and Braeden Hastings hit threes, but the Clippers trailed 50-18 at the half.

“They did exactly what I wanted them to do,” Meyer said. “Unfortunately in the first half we didn’t make as many shots as we wanted to, and Madelia did.”

Walechka took a Gens pass in for a score for the first basket of the second half. Madelia responded with a basket, but Hastings, Gens and Carter Dylla scored to keep up with the Blackhawks.

Later, Hastings sparked the Clippers with a hat trick of threes in quick succession. Staring his first game, the junior guard had 14 points, including a dozen that came from beyond the arc.

Gens also had 14 points, including five that came from the free-throw line and one from three-point land.

A 6-1 senior, Gens said the rough start has been hard on him, but the fun of competing with his friends keeps him going….that, and the Clippers are upping their game each outing.

“We’re working through what we have this year, but we’re definitely getting better. We’re improving all alone like fewer turnovers and taking more comfortable shots.”

Madelia put in six three pointers and were 8 of 16 from the free-throw line. Glover paced the Blackhawks with 20 points.

“Ja’Sean is great,” Meyer said. “We tried to shut him down, but he still put up 20 on us. Still, Carter Dylla did a great job playing on him.”

At Granada, the Clippers hung with the Jaguars for the first 14 minutes but were behind 47-26 at the break.

“We did some things well,” said Larry Walechka who stood in as coach for the Meyer. Meyer had a prior commitment. “I think we surprised them by playing man-to-man defense.”

Gens led the effort with 16 points. Dylla and Walechka each had a dozen points. Krenik added four points. Sullivan had three points. Blake Lyons had two points. Hastings had one point.

T/ML/GHEC had six three pointers and were 3-14 in free throw shooting. Adam Heckman led the Jaguars with 30 points.

“Heckman didn’t really hurt us until the second half when he hit a few threes to spread the lead,” Walechka said. “But you could tell the fourth game in six days was getting to us.”

The varsity boys return to action on Tuesday, December 28 with a game at New Ulm Cathedral. 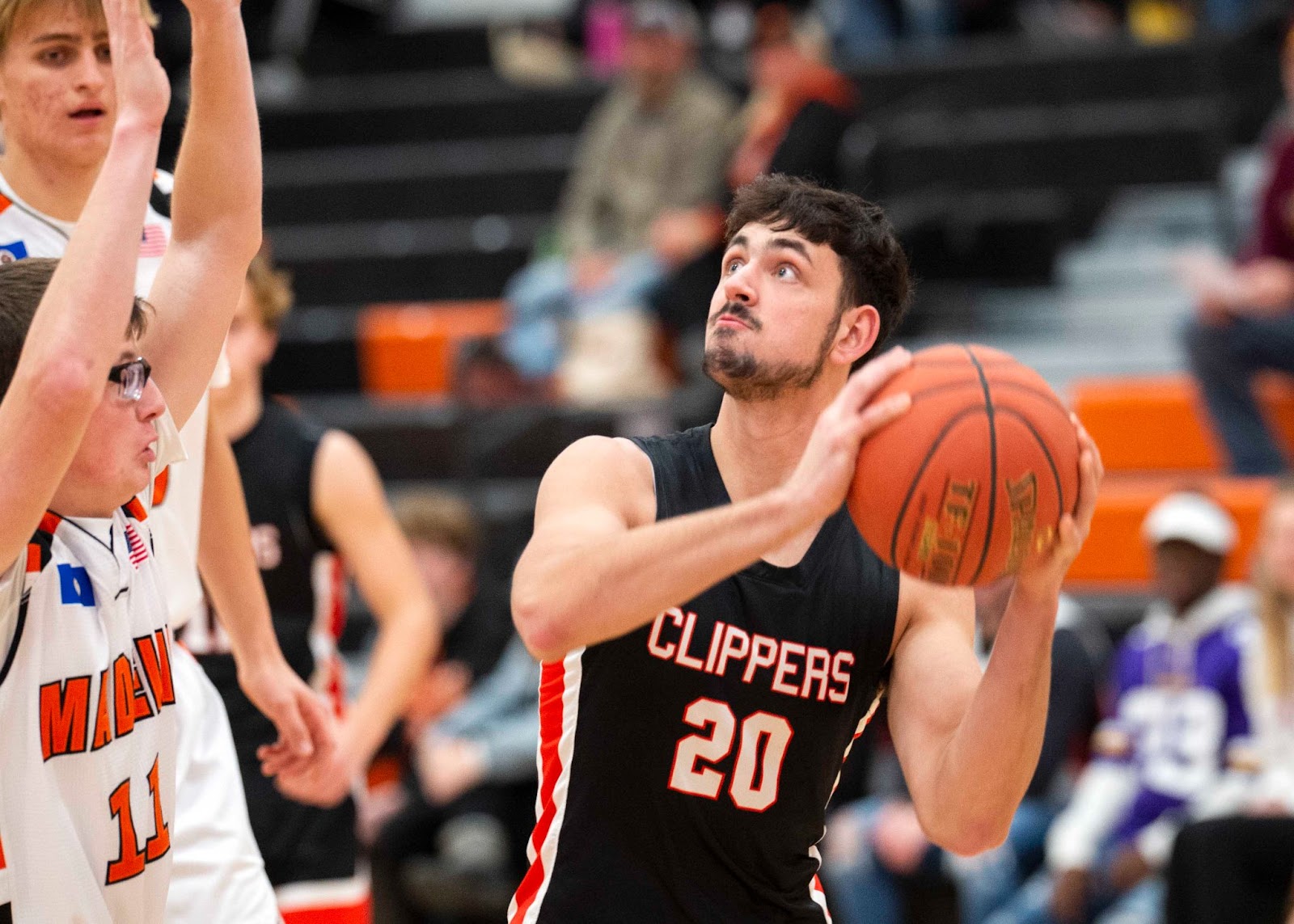 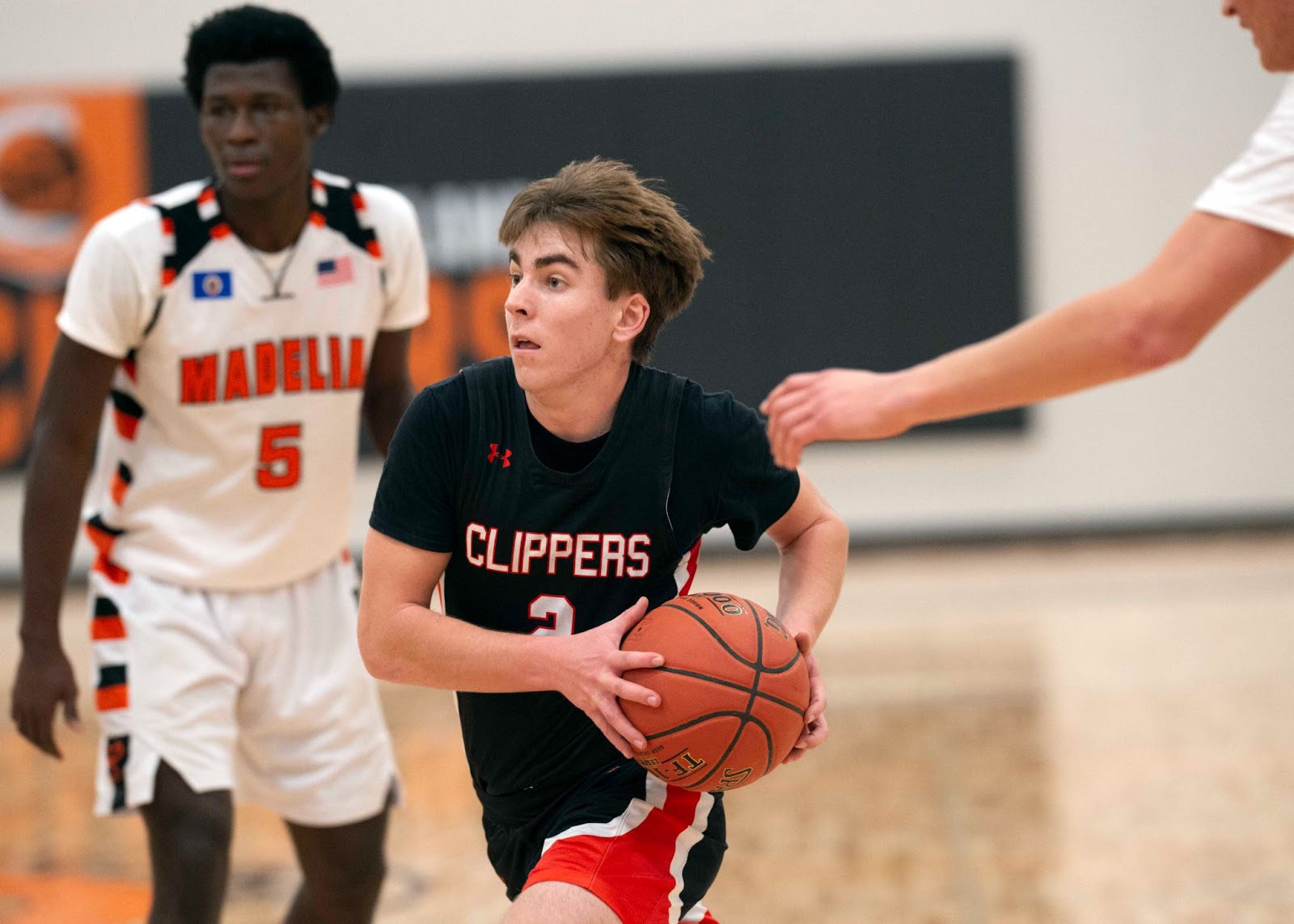 Carter Dylla takes the ball in for a layup. In the back is Ja’Sean Glover. 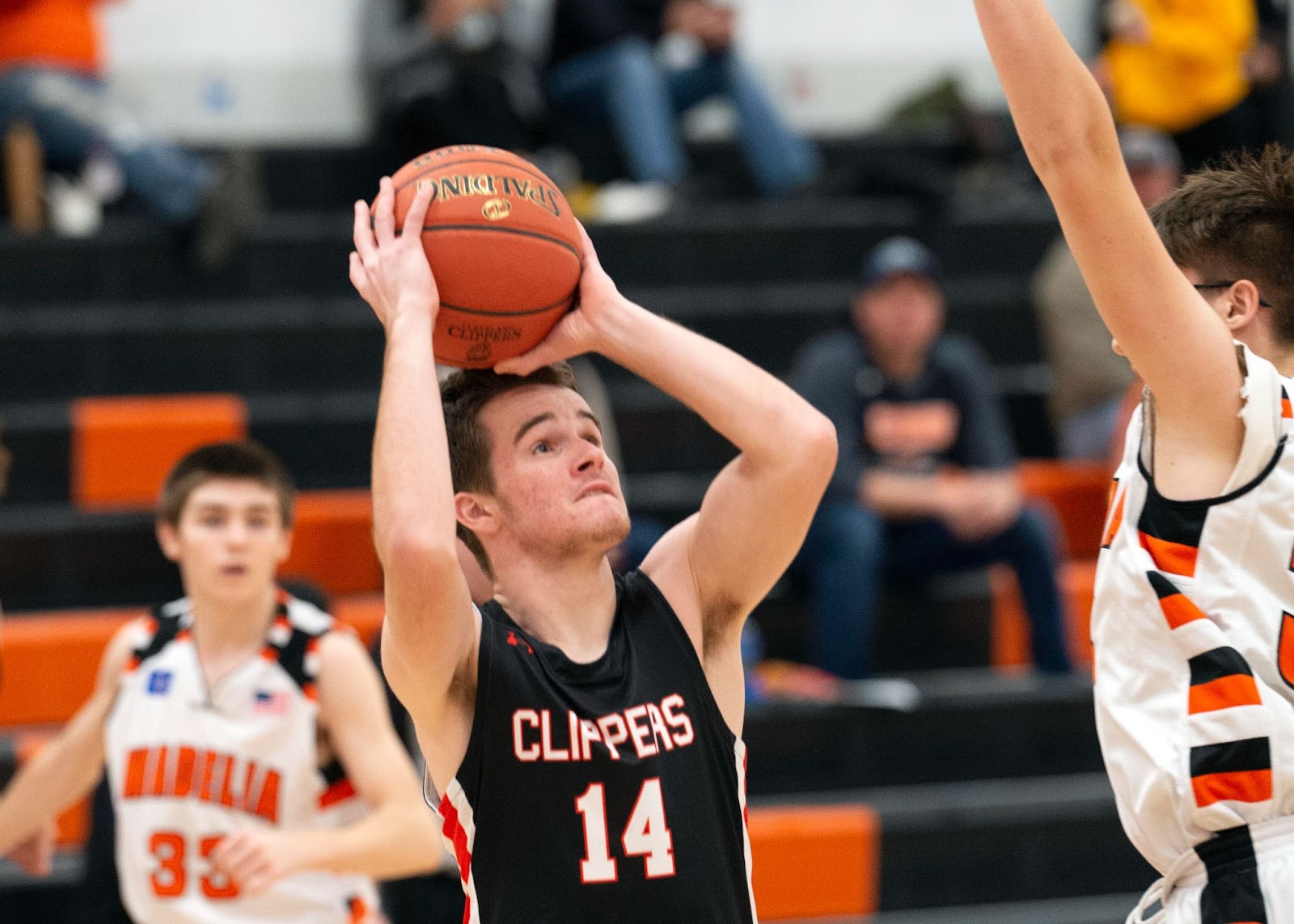 Colin Krenik coils for a shot.