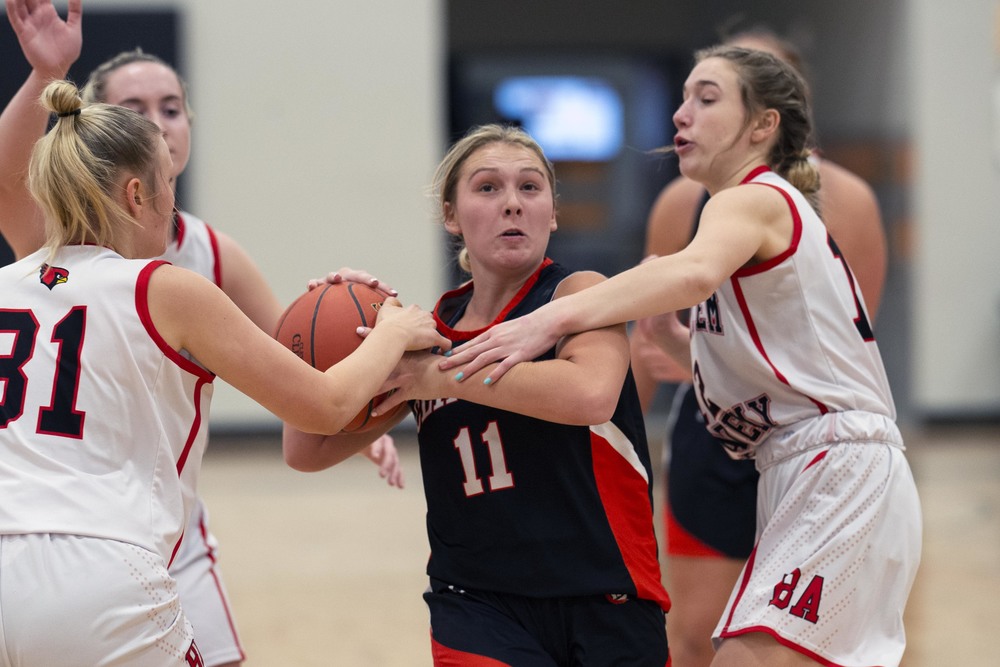 Above: Kaylee Karels drew a crowd but still managed to score 31 points.

Leading by seven at the intermission, the Clipper girls couldn’t hang on and fell 54-51 to visiting Faribault Bethlehem Academy on Thursday.

Head coach Joe Remiger said the Clippers haven’t had a practice since December 13, and that contributed to their inconsistency.

“It seems like Wednesday were going to work on some things, fix some things, and then snow day. That end of it has been hard.”

En route to a 16-point half, Kaylee Karels followed a layup with a pair of back-to-back threes—the second after Cleveland’s press forced a turnover on a 5-second call—to put the Clippers in front 8-2.

After the Cardinals hit a layup, Emily Kern scored on an in-bounds pass, and Karels hit a jump shot to put the Clippers up 12-5.

Later, Kern took an Ava Hahn pass up and in from the baseline, and Karels popped in another jumper. After  Hahn scored from the floor, and the Clippers, in the double bonus, made five of 10 foul shots down the stretch.

“It seemed like we were at 19 for a long time, so we were struggling offensively to get a bucket in," Remiger said, "but on the other side of that, defensively we held them. At least we’re keeping them eight to 10 points away.”

The half ended with a pair of Cardinal gratuity baskets and a 24-17 Clipper advantage.

The Cardinals scored the first basket of the second half. Soon after, Kern took a shot to the eye and had to leave the floor for a few minutes to wrestle with a contact lens. The Cardinals only scored a basket in the hiatus compared to one point by the Clippers, but it didn't  help the situation, Remiger said.

Later, the Clippers, up 28-21, turned as cold as the -13° F that showed on the jumbotron, and BA went on a 10-point run to take a lead they wouldn’t relinquish.

Upping their game after the intermission is the Cardinals’ MO, Remiger said.

“It was like a game they had against Southland. They came out super slow in the first half and then tied the game and almost went into overtime.”

Greta Hahn made a pair of free shots to stop the rally, but the Cardinals came back with a pair of two-pointers and a three to go up 38-30.

Karels drove the baseline for a basket, and Greta Hahn iced a pair of free throws and then drove through the paint for a basket, but the Cardinals plunked in another three.

Later, Karels took the ball inside for a bucket, but the Cardinals responded with an uncontested basket from under the rim.

With a pair of Greta Hahn free shots and a Karels jumper, the Clippers pulled within two, 44-42, but the Cardinals again got a player all alone under the net for an easy basket and followed up with a three for a 49-42 advantage with 2 minutes remaining.

Putting in seven foul shots, the Clippers outscored BA 9-5 from there, but it wasn’t quite enough, and the Cardinals held on for the triumph.

“I told them thanks for fighting to the end,” Remiger said. “They could have given up way before.”

Karels, who put in the Clippers’ two three pointers, led all scorers with 31 points. Greta Hahn added nine points with seven of them coming from the charity line. Her sister Ava made two freebies and a basket from the floor for four points. Kern totaled five points. Lacey McCabe and Mariah McCabe each chipped in one point.

The Clippers were successful in 23 of 37 free shots. They committed 23 fouls, six less than BA. Laci Hollerich fouled out with about 5 minutes left. Kern fouled out with 6 seconds left. BA put in a trio of threes and was 13 of 24 from the foul line.

The Varsity Clipper girls are back in action on Monday when they host Martin County West. Jump ball is at 6:30, 45 minutes earlier than the usual starting time. 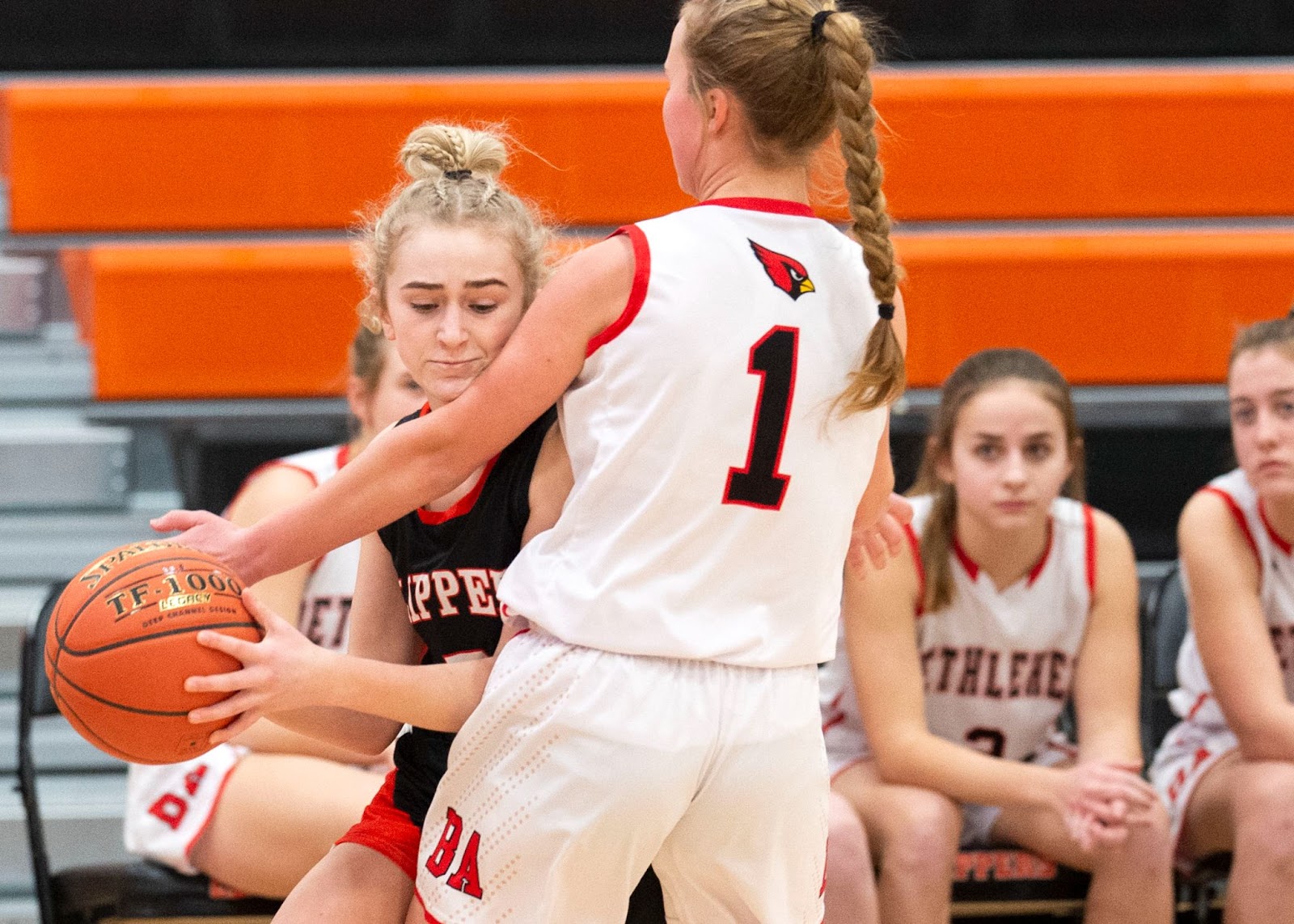 A defender plays some chin music with Ava Hahn. 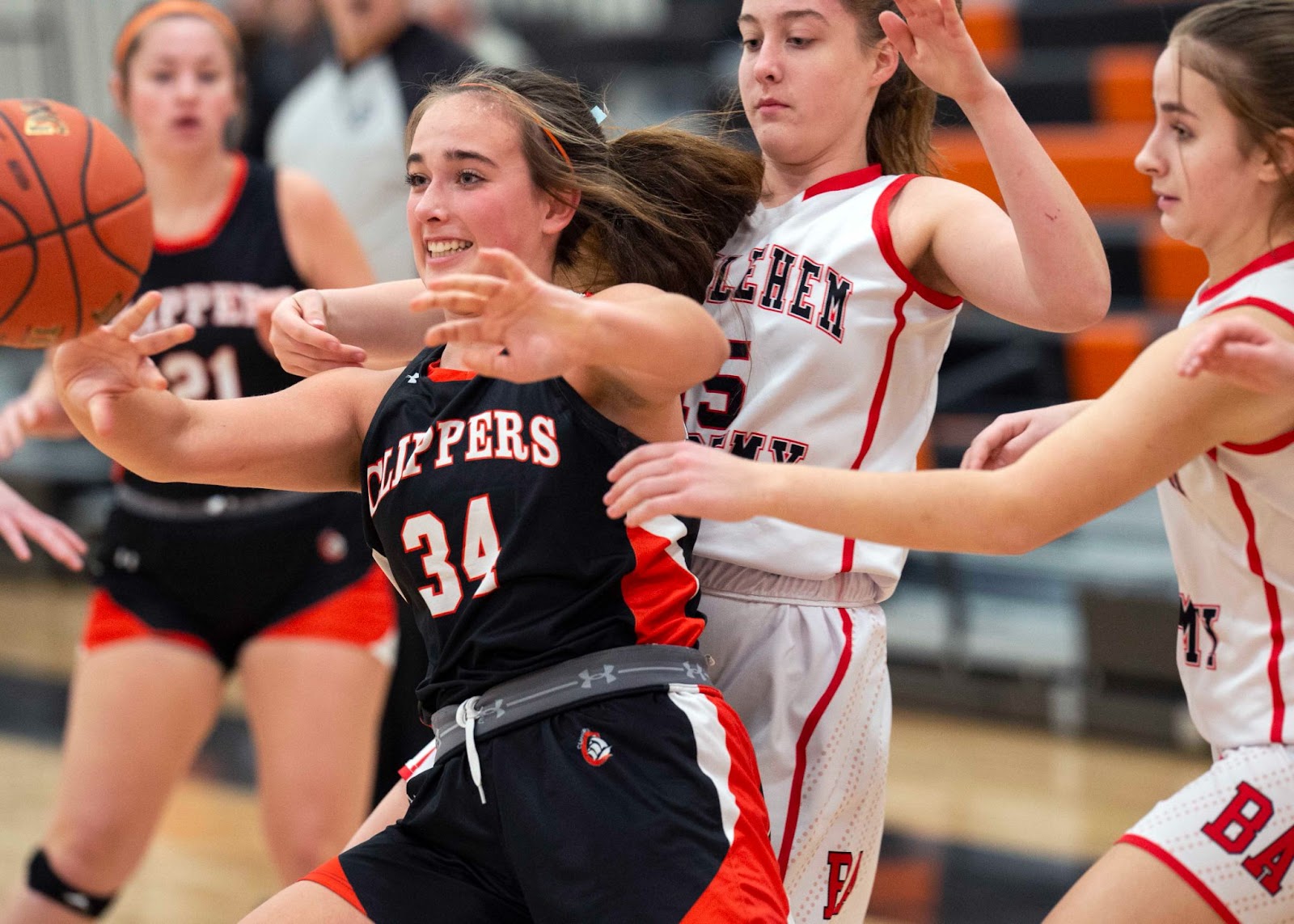 Laci Hollerich tosses the ball away from a crowd. 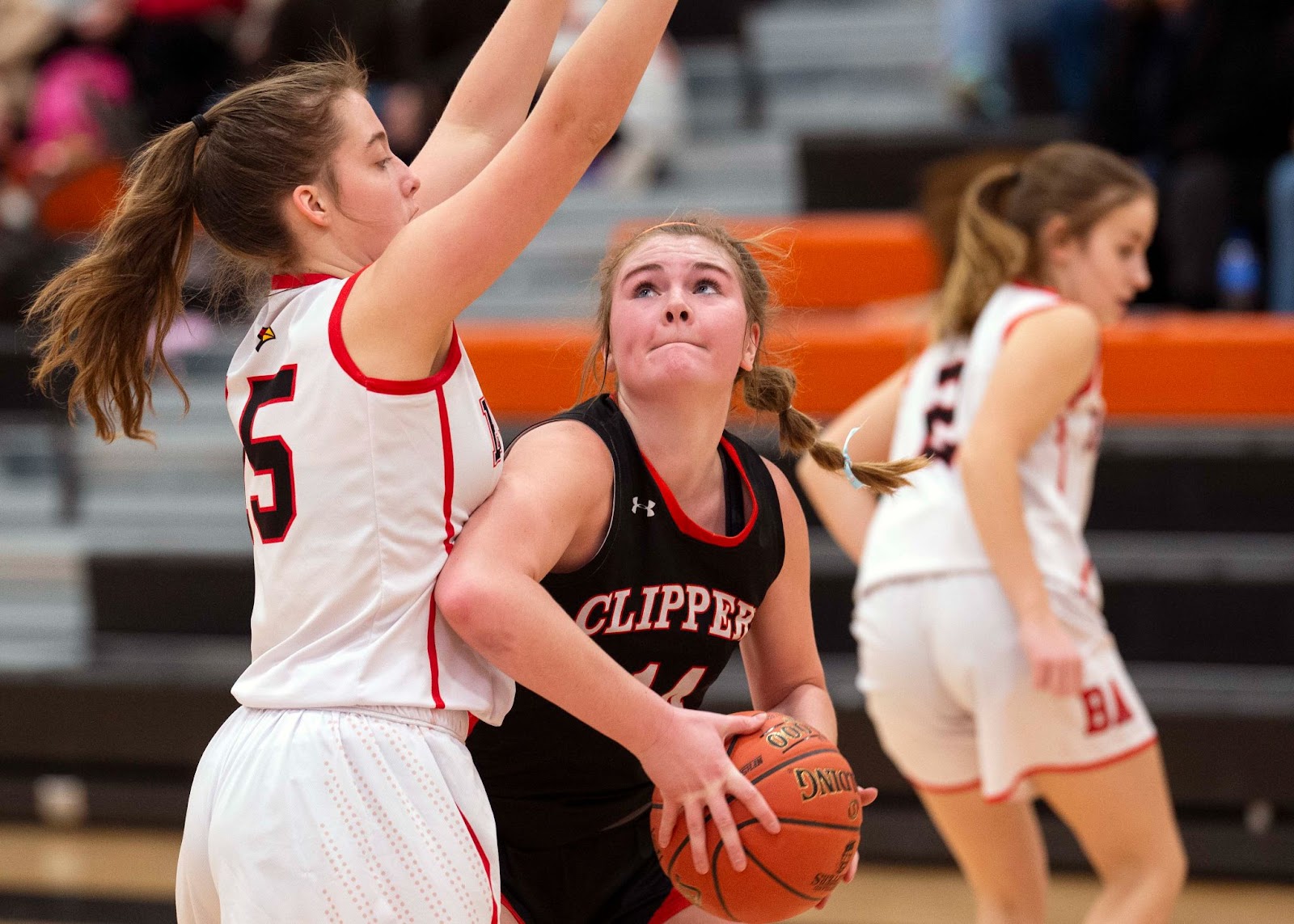 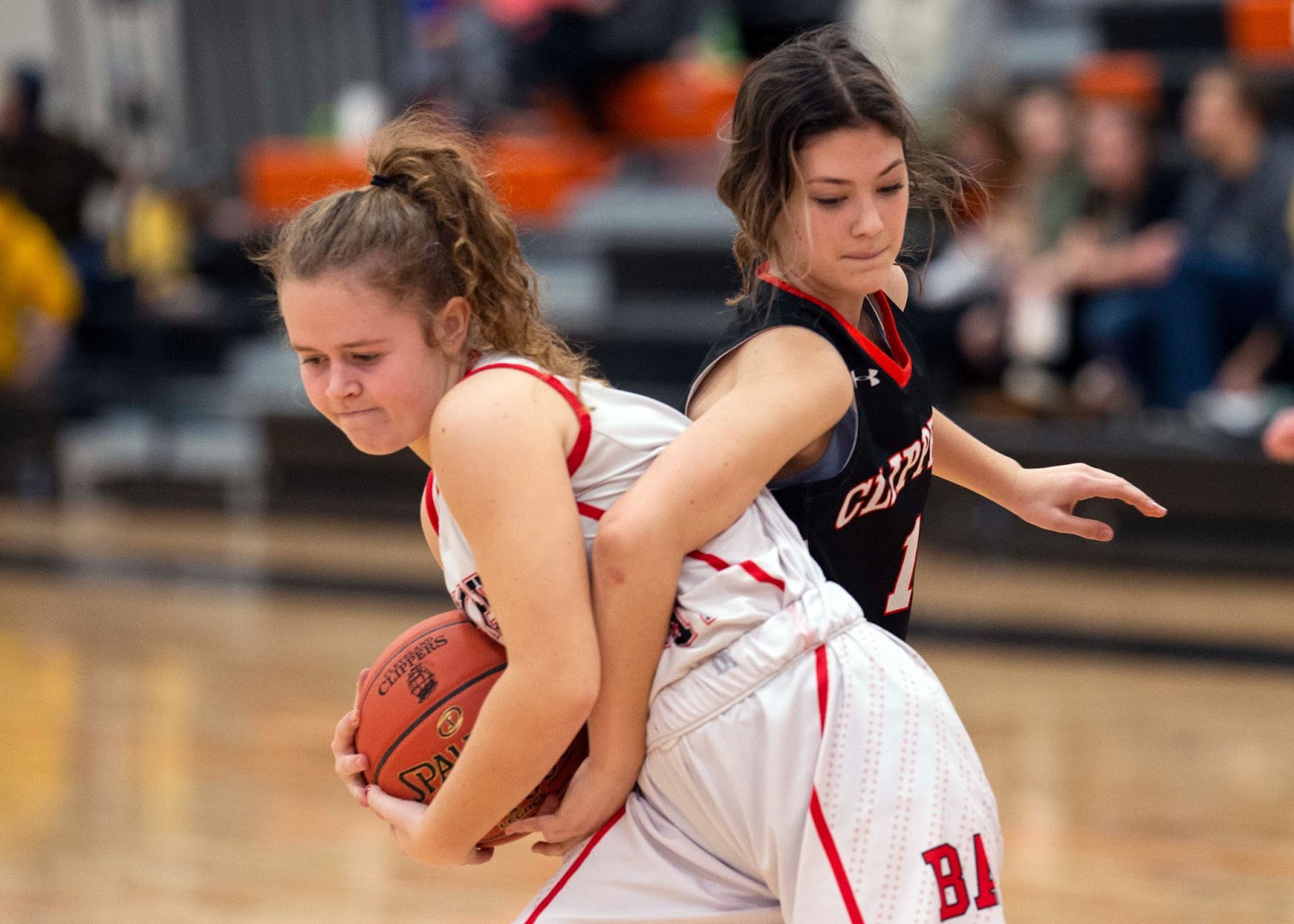 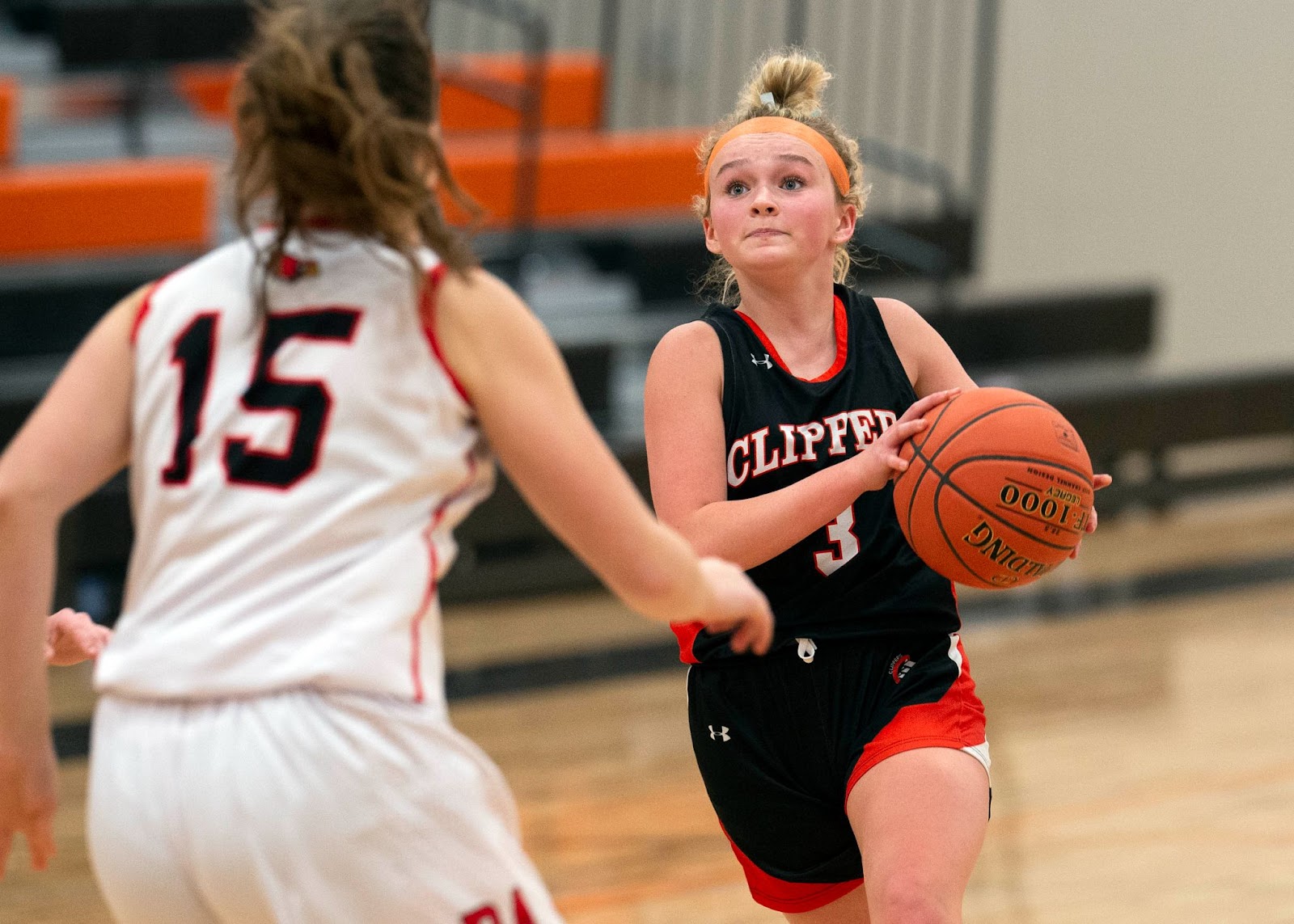 Greta Hahn takes a look at the basket. 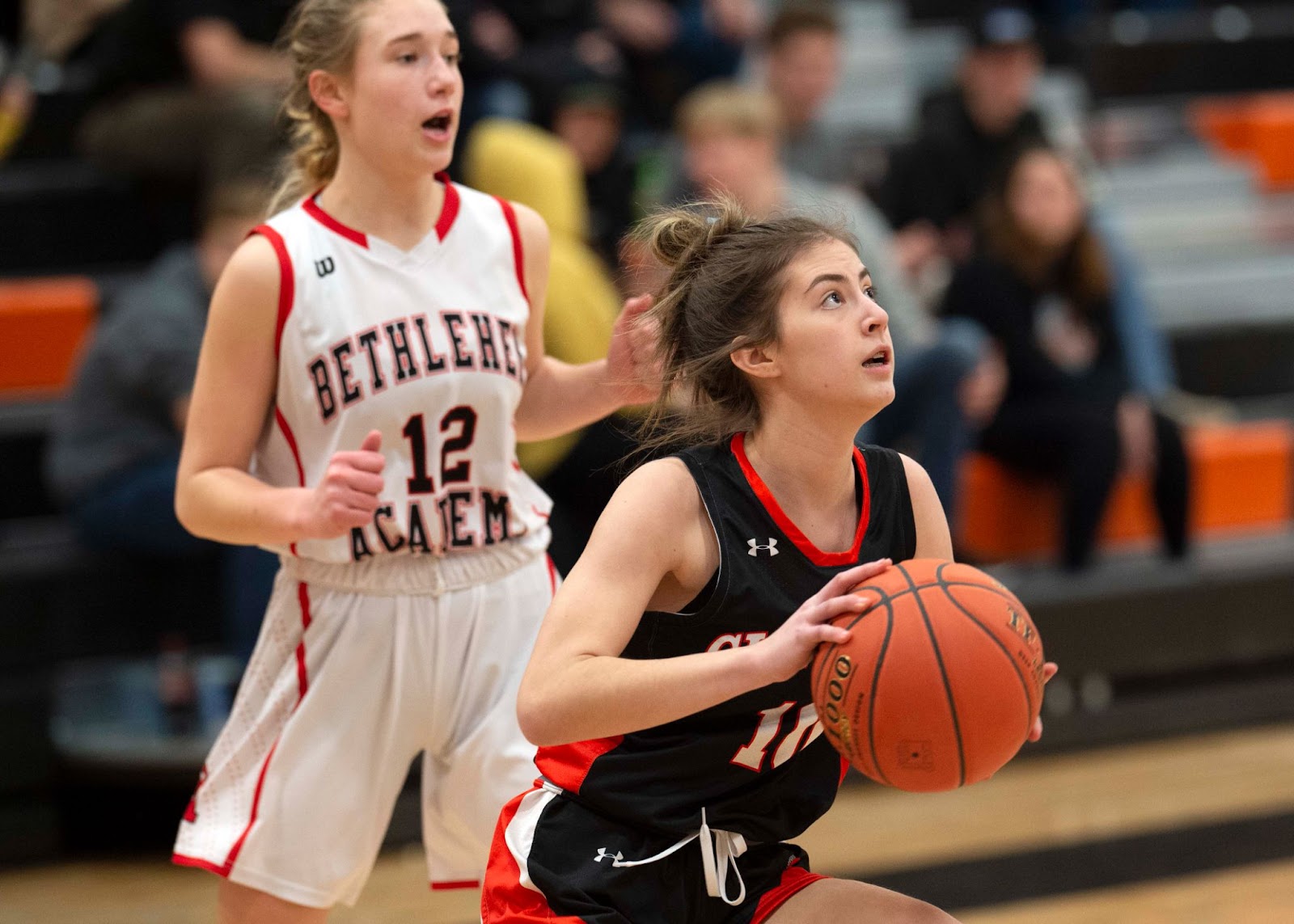