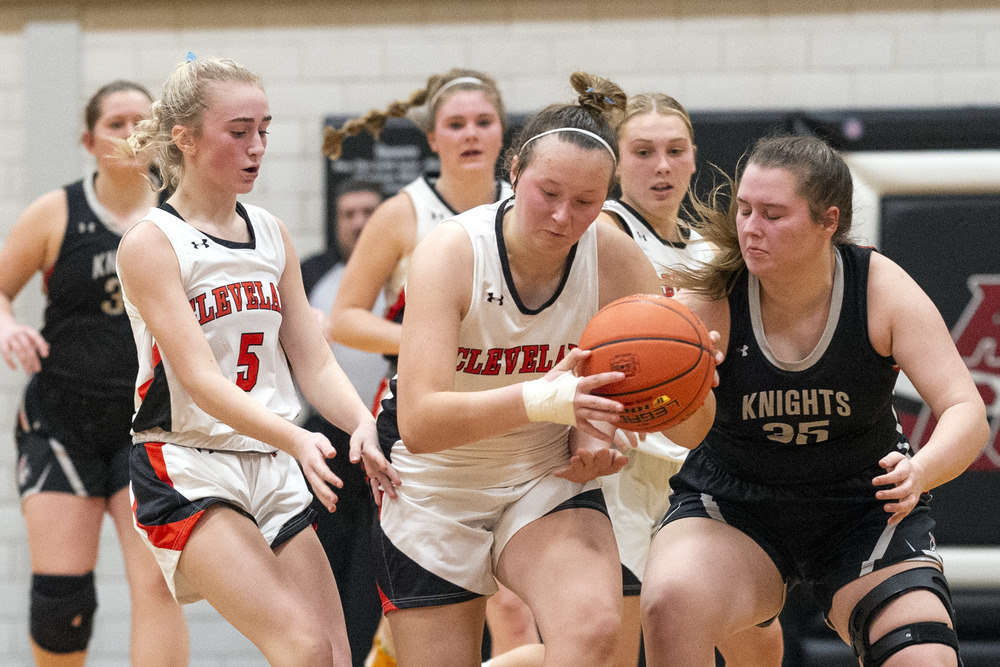 Above: Sarena Remiger on the breakaway.

Back on the winning track after a six-game slide, the Clippers easily beat Alden-Conger/Glenville-Emmons 56-35  in Alden on Tuesday.

“It’s refreshing. We just needed to get a win,” said 6-1 senior senior Emily Kern, whose work on the boards loomed large in the 36 minutes. “It’s been hard losing all those games, but this one really helped us.”

Although the Knights fell to the Clippers 48-25 in the conference opener back in early December, head coach Joe Remiger wasn’t expecting a gimmie as the Clippers have had trouble finishing of late.

“Our team can’t take anything for granted. We’re going to have to come to play and to work for it, or we won’t win, and that was communicated them yesterday and the day before.”

The Knights put in the first basket, but soon after, Kern rebounded and scored for the start of an 11-point spurt that gave the Clippers an early lead that would last to the final buzzer.

The defense made for the good start, Remiger said.

“Greta (Hahn), Kaylee (Karels)….all of them are doing a ton better getting on the back line, stepping in and helping out. I was pleased with how they played defensively tonight.”

The Knights scored the next six points, but Karels hit her second three of the game, Hahn took a Kern assist down the baseline for a basket, Sarena Remiger drove the paint for a score, and the Clippers were quickly in front 19-10.

After the Knights put in a basket, Hahn got hot from outside, sinking the game’s next three buckets, including two from three-point country, and the Clippers led 27-14 at the half.

“The first half, if we got open shots, we were shooting,” Remiger said. “The other night against Martin County West we were hesitating. Ava (Hann), Greta…they were hitting shots from the outside, so that opens stuff up down low.”

Remiger stole and scored on a layup for the first basket after the break. She went on to put in three more in the second half as well as four baskets from the charity line. Karels also made a trio of second-half baskets, and the Clippers easily held on for the win.

“When we needed rebounds,” Sarena was on the boards,” Remiger said. “Emily played a great game tonight.”

“We changed our offense a little bit,” Kern said. “We got the flow going better so the guards are getting good shots. That’s way more fun when you are working together as a team.”

Karels, one of three Clippers in double figures, had 17 points, six that came from across the arc. Remiger scored 13 points. Greta Hahn had 11 points with six of them from three-point land. Ava Hahn had four points in each half. Kern added seven points. The Clippers made eight of 19 free-throw shots.

Alden Conger put in three three pointers and were two of 14 from the foul line.

The Clippers, now 4-4 in the Valley, host Madelia on Tuesday. The Clippers beat the Blackhawks 60-26 earlier in the season. 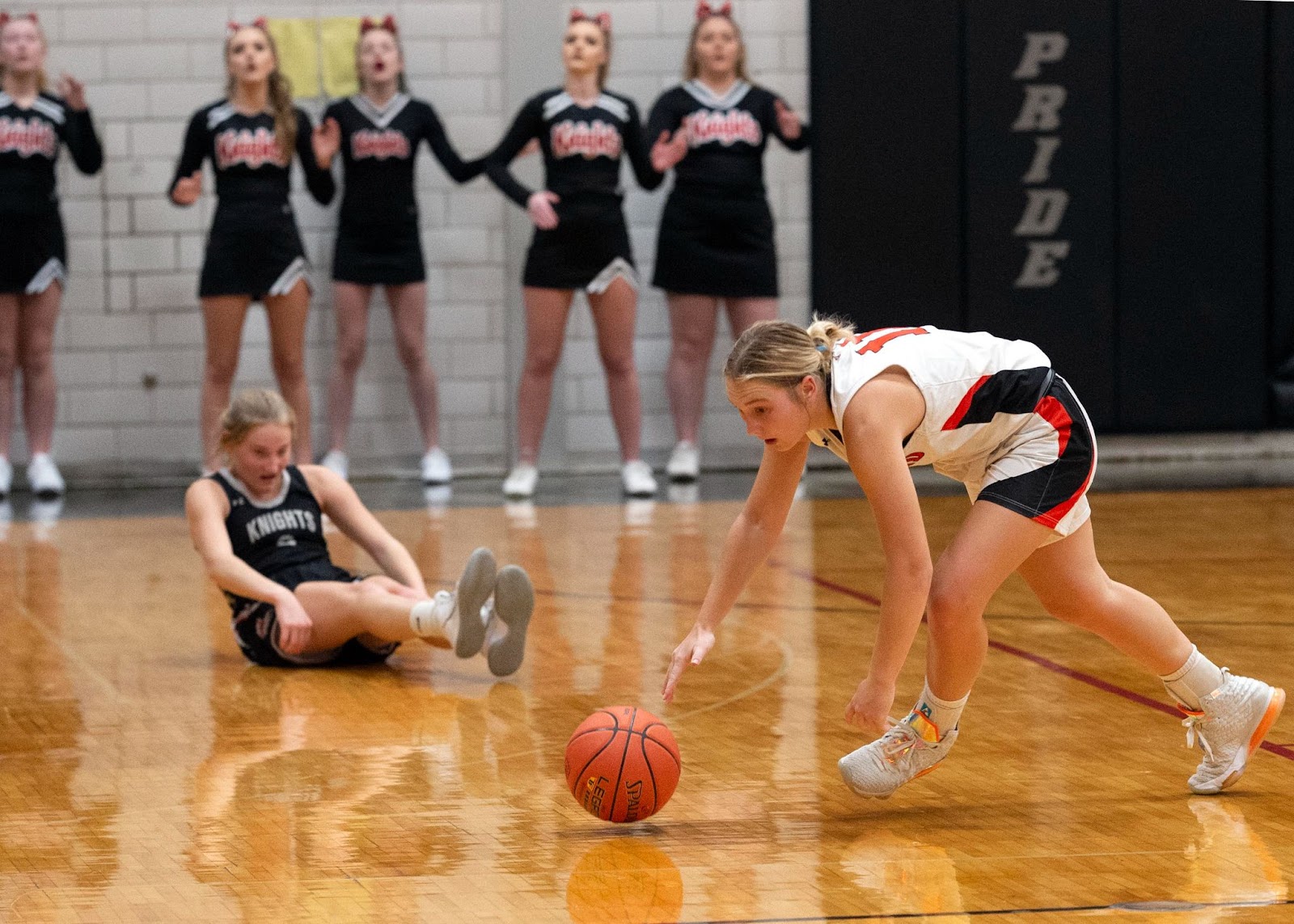 Kaylee Karels won this battle for a loose ball. 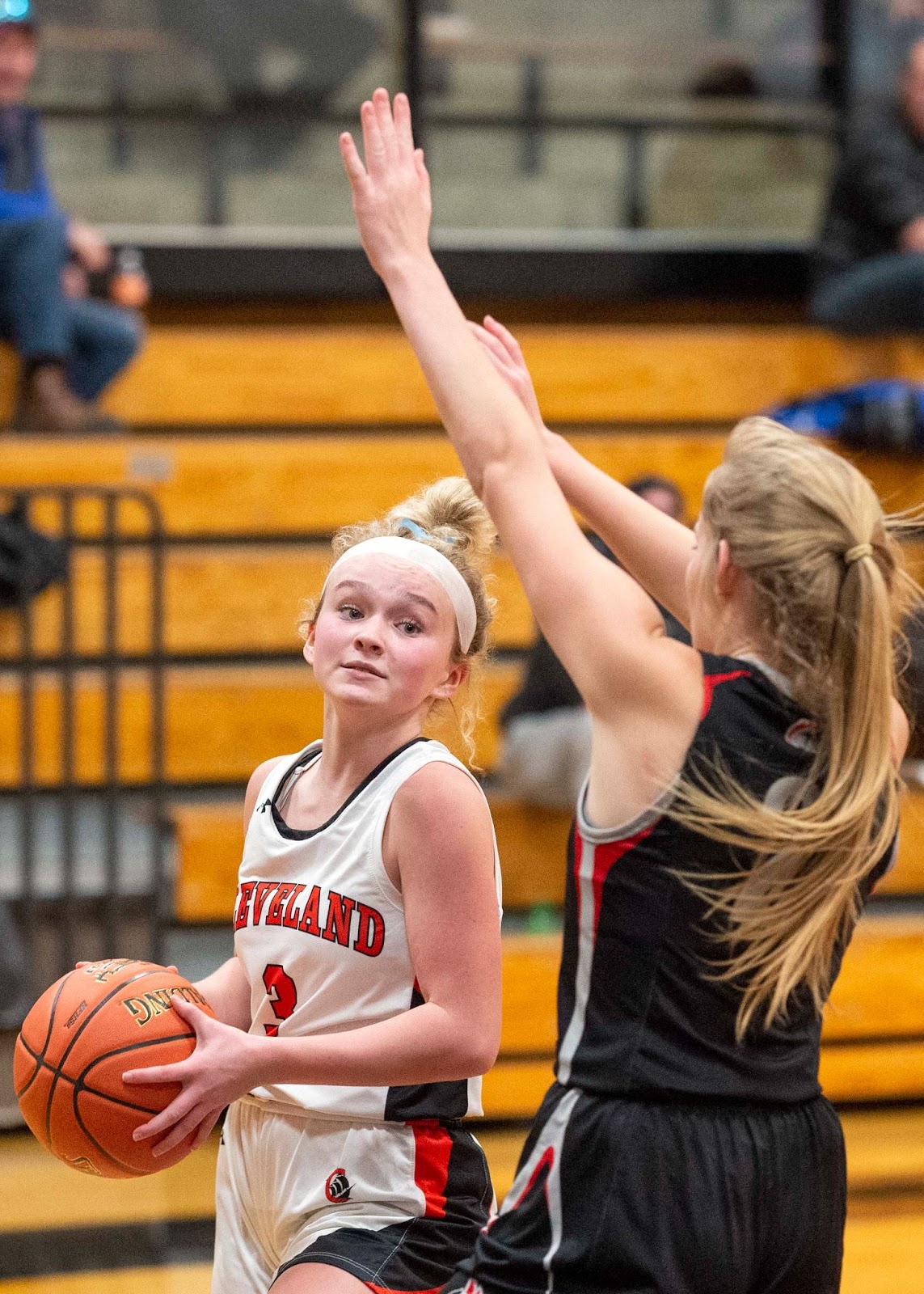 Greta Hahn looks for an open teammate inside.