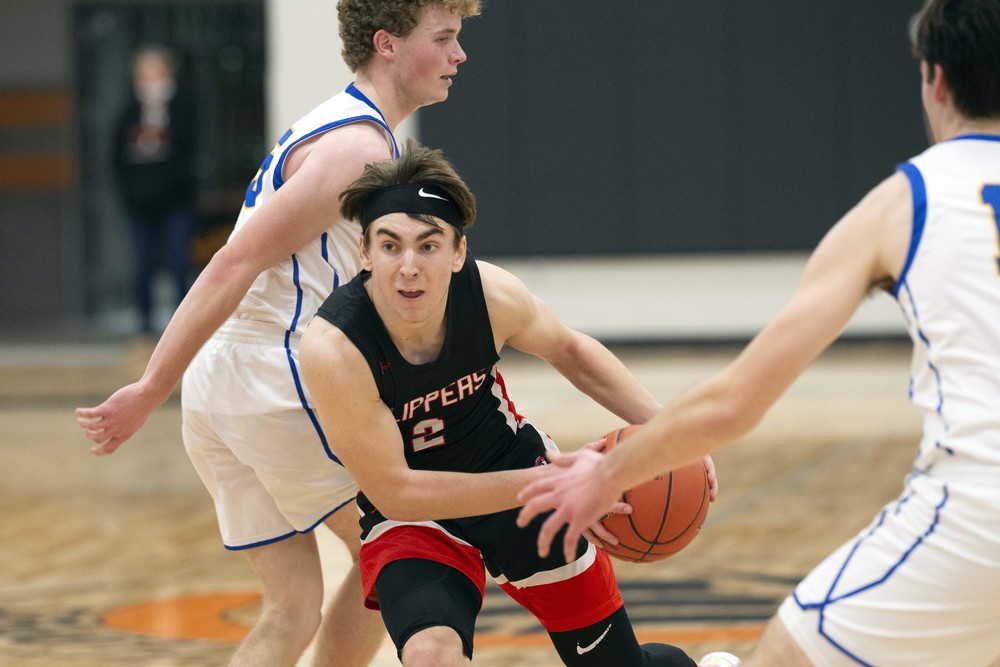 Varsity boys are stepping up to challengers

Tired of getting their lunch money taken, the varsity boys have been stepping up to their opponents lately, but after 13 games, they are still searching for their first win this season.

The Clippers didn’t back down again on Monday when Le Sueur-Henderson came to town. They never cried “uncle,” but ultimately fell 72-52.

“It’s one of our better efforts,” said head coach Mike Meyer. “We played pretty well against Martin County West over the weekend too, but today I think we beat ourselves more than Le Sueur-Henderson beat us.”

The Giants scored the first four points, all from the foul line, but Colin Krenik buried a three, and Carter Dylla (above) scored after a steal and shore-to-shore drive for a layup, and the Clippers were suddenly in front 5-4.

The Giants hit a foul shot, rebounded after a missed second and put in a three, but Krenik, hot from outside, canned a three from the corner to knot the game at 8.

With the Giants on the full-court press, the Clippers turned the ball over twice from there, and LSH went in front 12-8.

“We started out with some good pressure and the right mindset to attack the rim,” Meyer said. “Carter Dylla is driving to the hoop and getting good penetration, but the rest of the guys forget that if he gets stuck, someone has to be there to help him. We’ve got guys who are watching the Carter Dylla show, and they’re not moving to get open.”

Dylla drove the baseline for a basket, Lucas Walechka put in a backwards layup, and Braeden Hastings made a pair of foul shots, but the Giants outscored the Clippers 12-6 to extend their lead.

Wyatte Devens grabbed an offensive rebound and scored, and Dylla scored again on a baseline drive, but the Giants posted the next nine points before Kolby Gens put in a three.

After a pair free baskets, the Giants were in front 35-21 at the intermission.

LSH scored after the Clippers turned the ball over on a travel violation to start the second half. Walechka scored inside for the first two of 10 points he would have in the second half.

Dylla made another steal on the other side of the court and scored, but the Giants posted the next six points before Walechka rebounded and scored.

“We put on some really good ball pressure in the second half and started getting some turnovers,” Meyer said, “but then as soon as they break our pressure, we’ve got guys flying out of control and get out of position, so mentally they just need to stay in the game. Physically, we’re good enough to beat a lot of these teams that we’re playing.”

Later, Dylla and Gens put in threes, but the Clippers were still outscored by six points in the second half.

“We get frustrated once we start getting some ball pressure,” Meyer said. “At the beginning of the game you can see our crisp passes, and we’re running through our offense the way that we’re supposed to, but then they start getting the lead, and we’ve got too many guys trying to take over. If we keep our offense going, our offense works.”

Dylla led the effort with 16 points, including a pair of threes. Walechka scored a dozen points. Braeden Hastings had eight points. Gens and Krenik each had six points, all from behind the arc. Wyatte Devens had four points.

The Clippers made all six of their free shots. The Giants had four threes and were 20 of 26 from the foul line. The Clippers had 16 turnovers and five steals.

Gens led the effort with 10 points including a three point basket. Walechka had seven points, including a basket from behind the arc. Lyons put up a three pointer, and Dylla had two points.

The Clippers made one of four free throws. Randolph had eight threes and were nine of 15 in free-throw shooting.

Gens broke out for 23 points, including a quartet of threes. Dylla had 10 points. Devens and Walechka each had six points. Lyons had four points. Hastings and Gabe Sullivan each put in a three-point basket.

The Clippers, coached by Lon Voss, were nine of 14 from the foul line. Alden-Conger/Glenville-Emmons plopped in nine threes and was 11 of 27 in free-throw shooting.

In Trimont against Martin County West on January 15, the Clippers fell 66-44. They trailed 33-15 at the break.

Gens paced the Clippers with a dozen points with six points that came from in back of the arc. Dylla and Lyons each had seven points. Hastings made a three, a two and a freebie for six points. Walechka scored five points. Krenik had four points. Sullivan put in a three pointer.

The Clippers were 12 of 24 from the foul line. The Knights put in six three pointers and were eight of 13 in foul shooting.

The varsity boys travel to Nicollet on Thursday. They fell at home to the Raiders 69-48 earlier in the season. 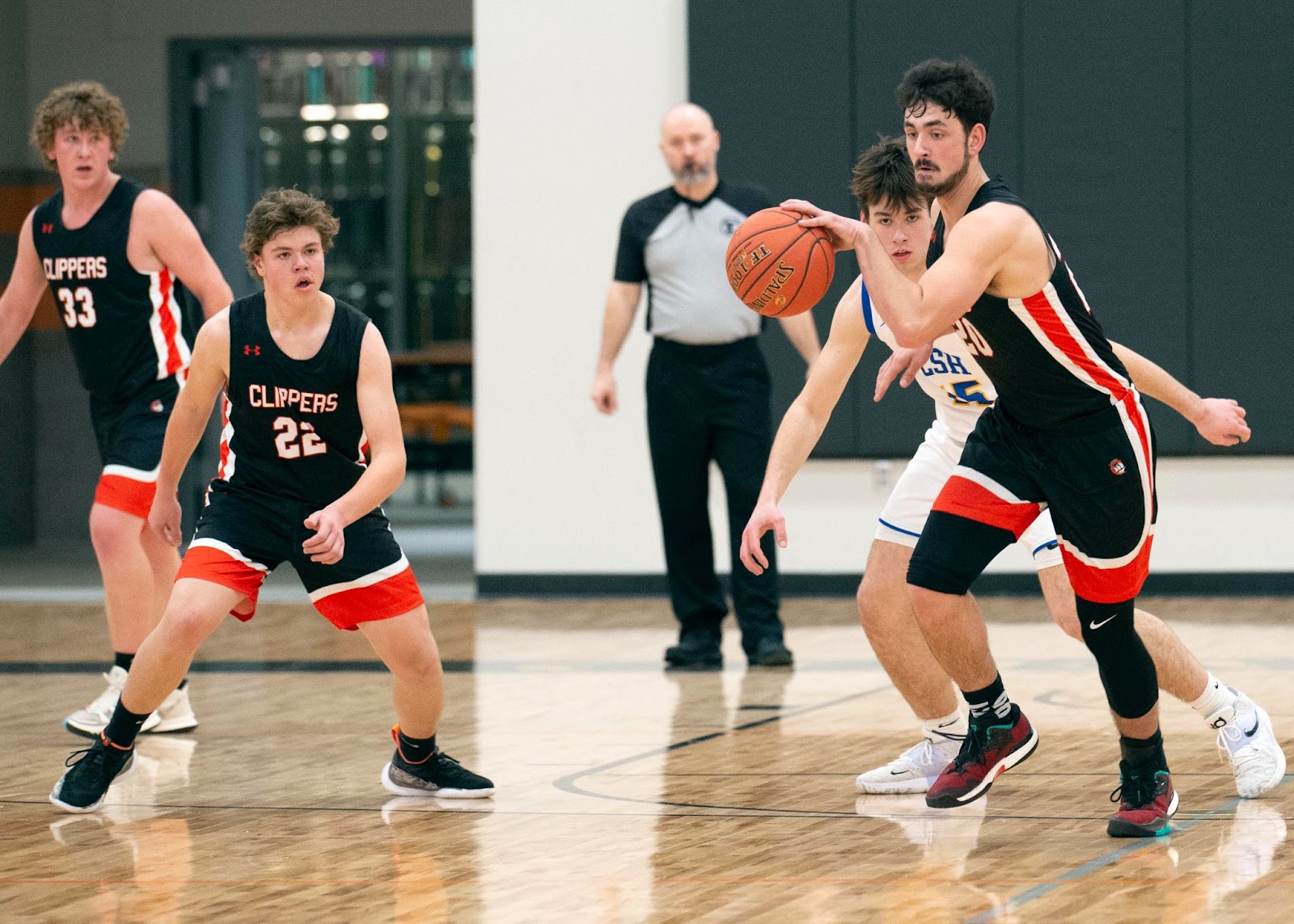 Kolby Gens on the transition against LSH. 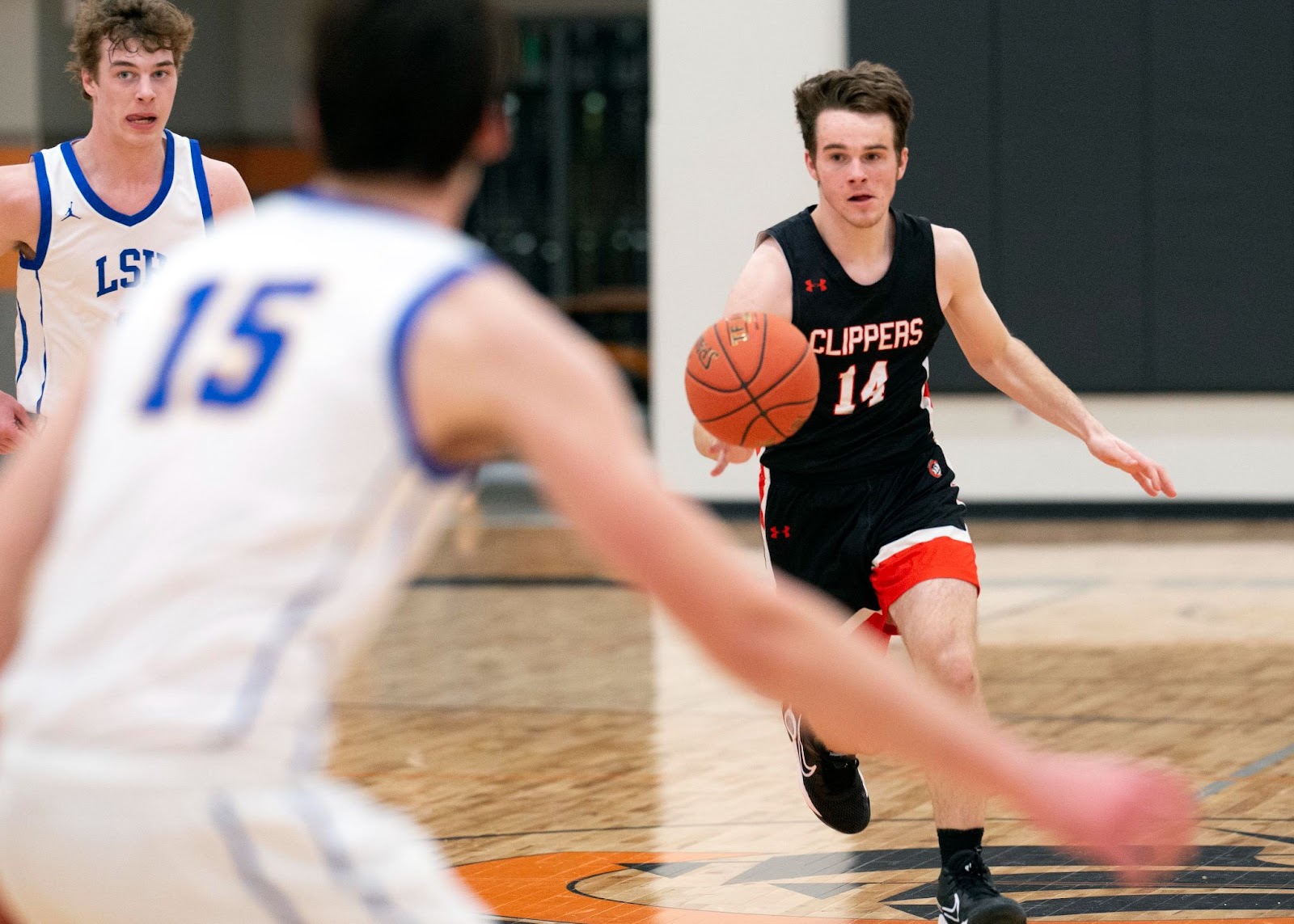 Colin Krenik guides the ball down court on Monday. 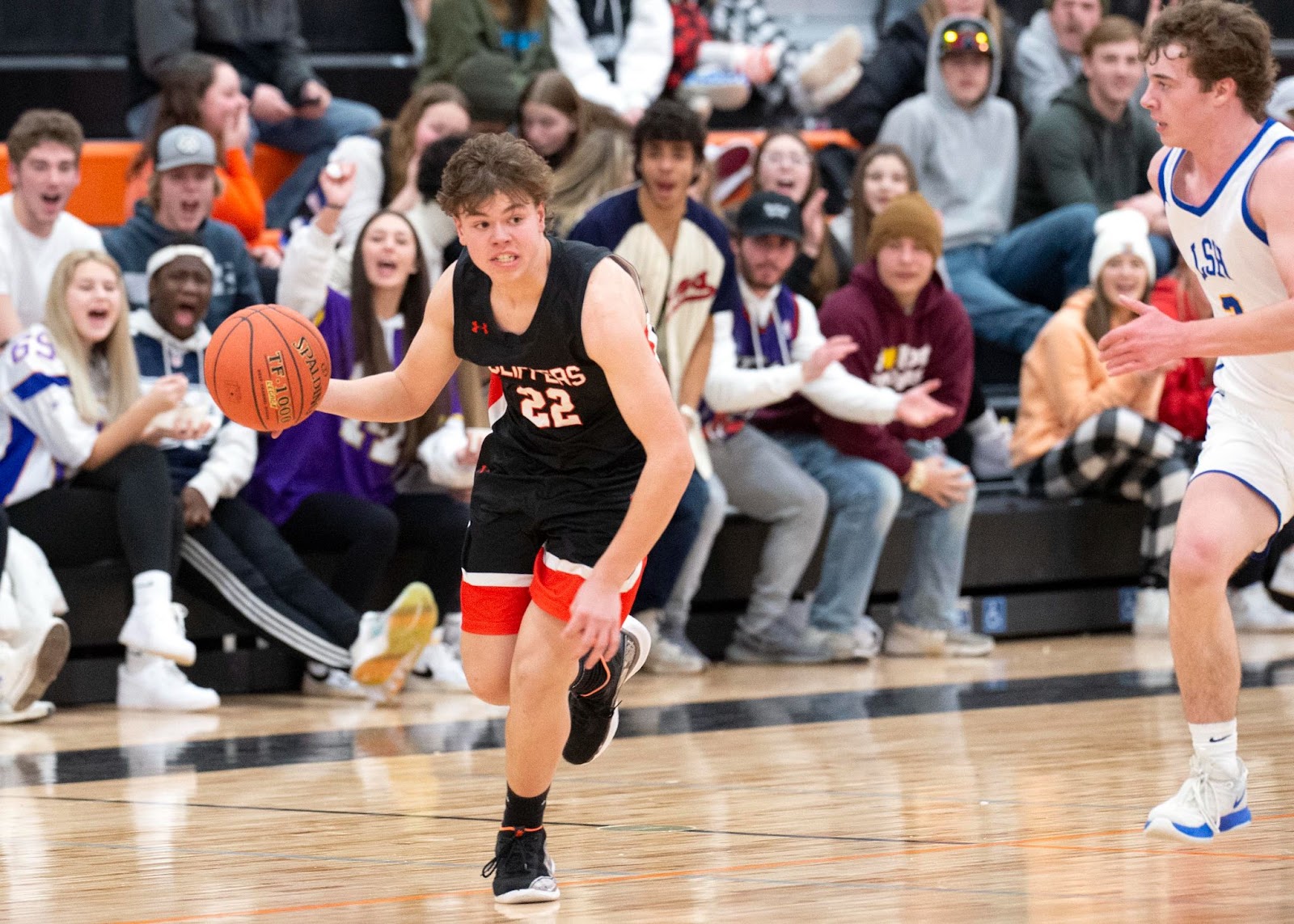 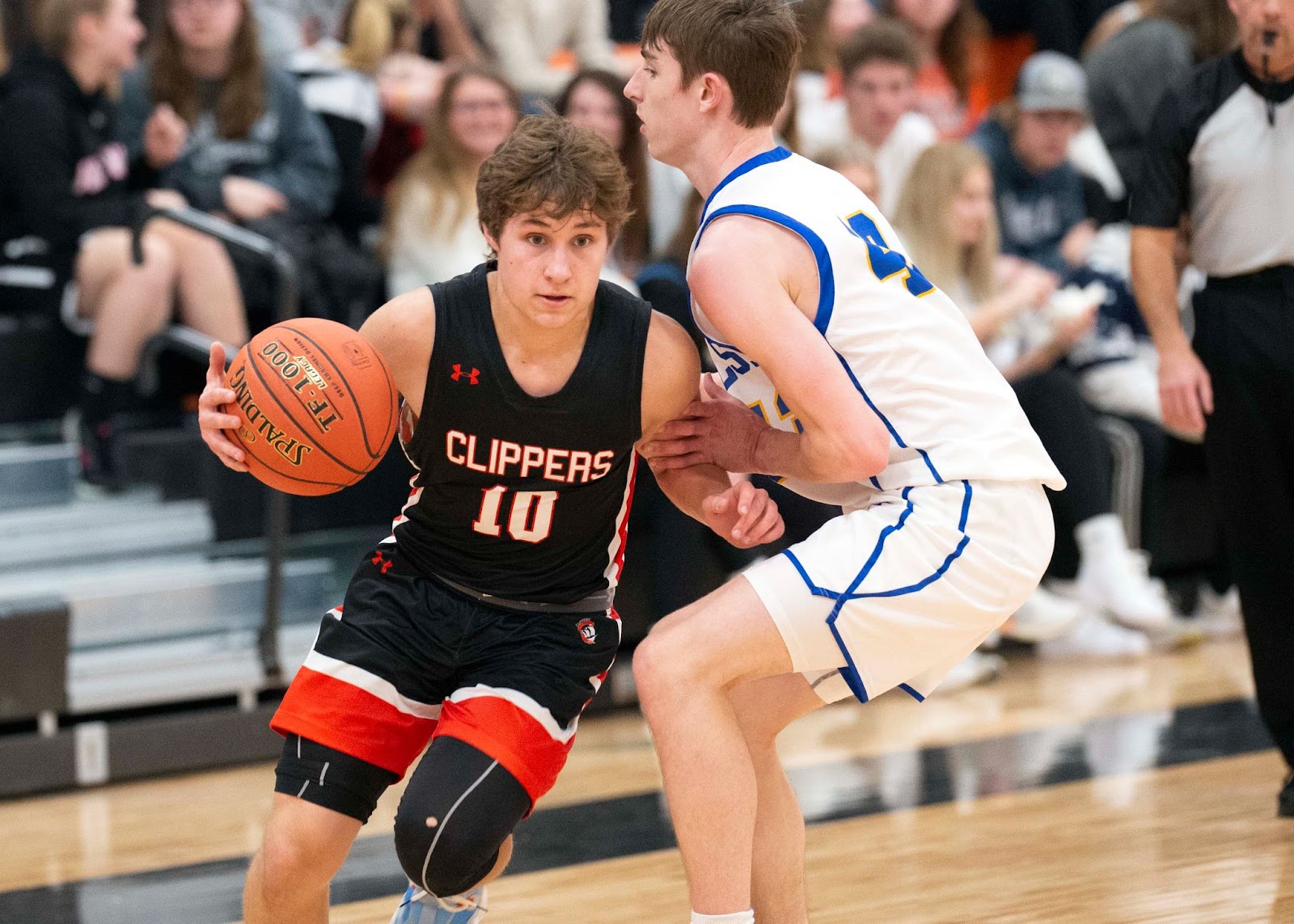 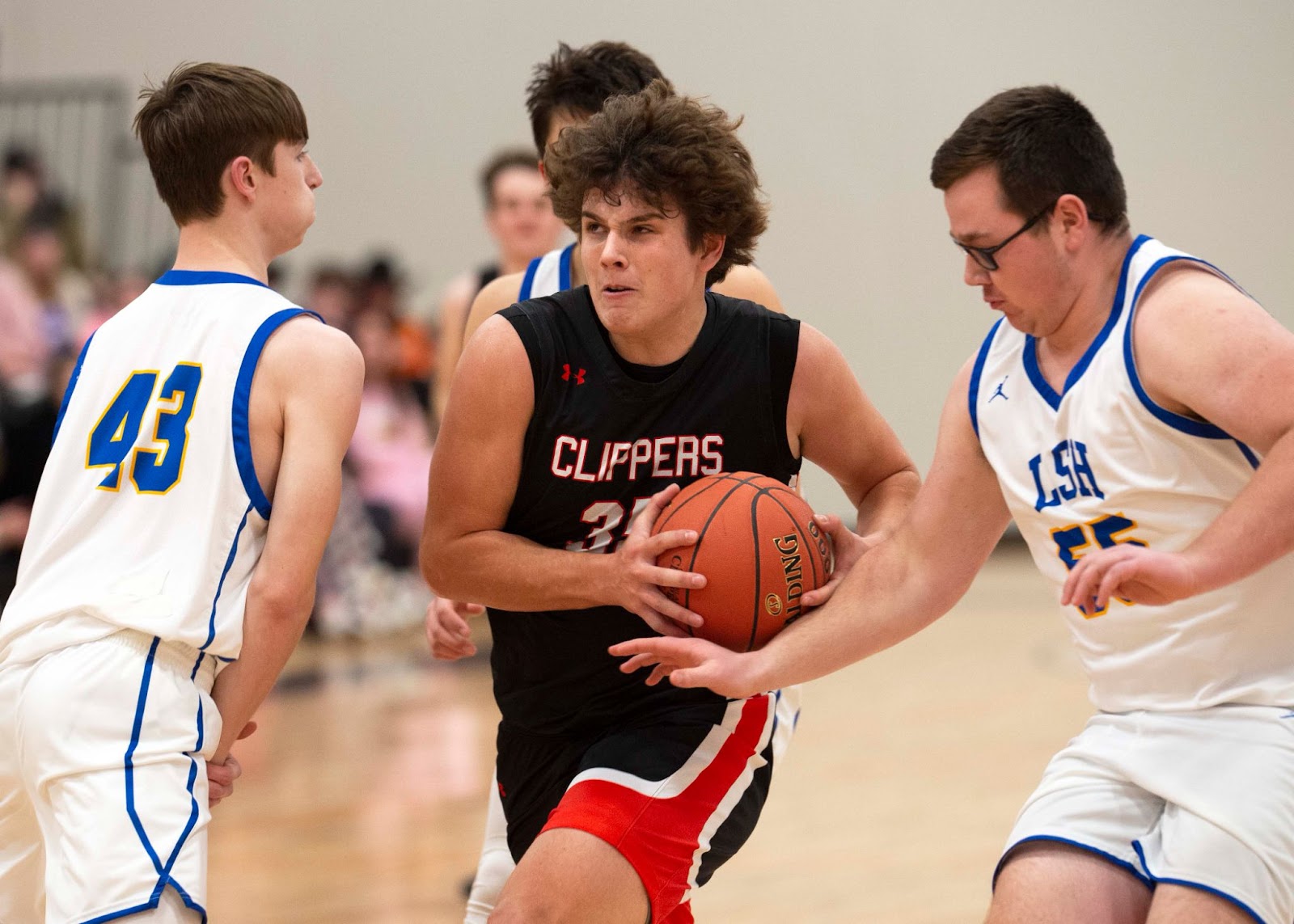